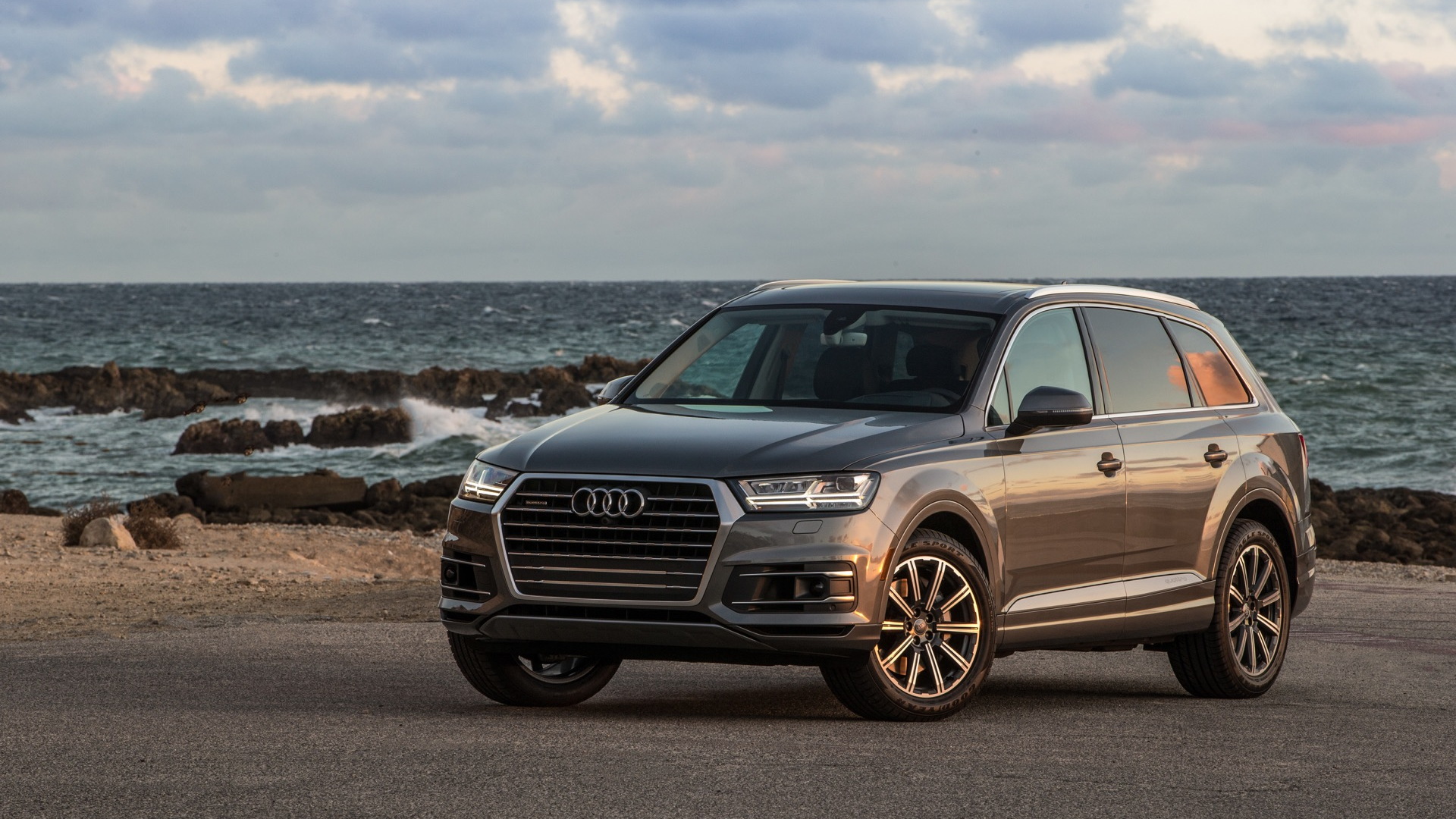 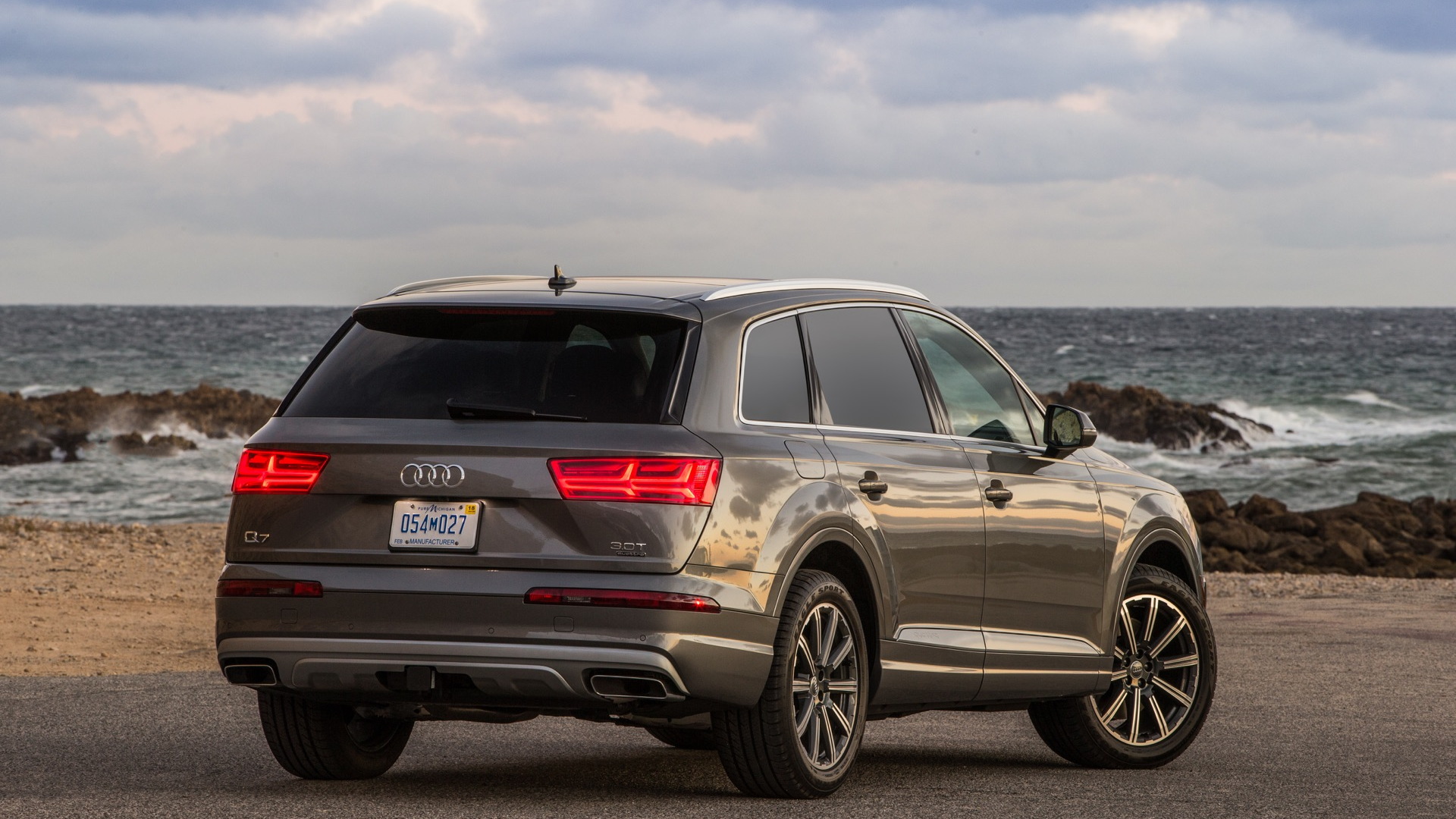 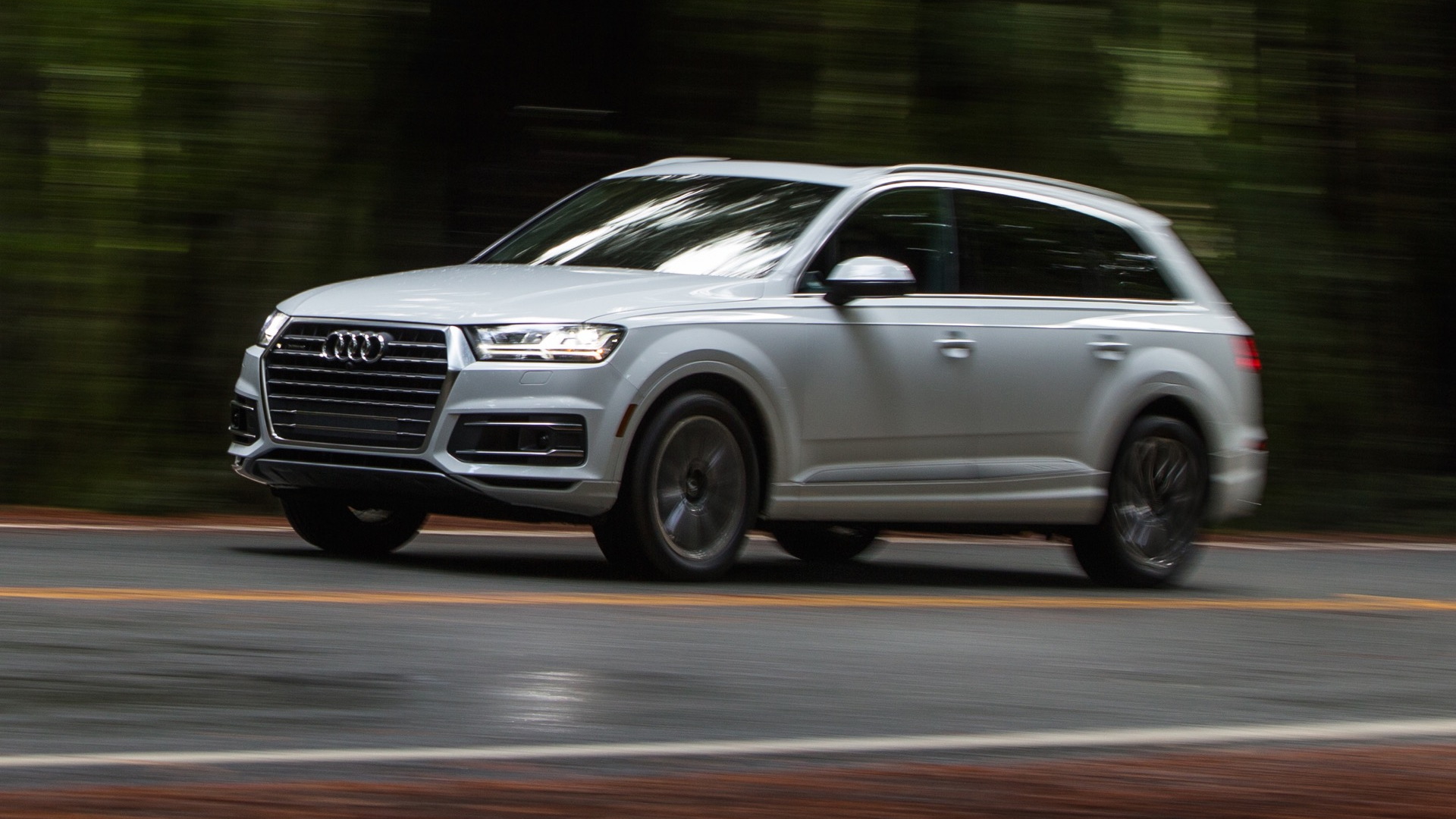 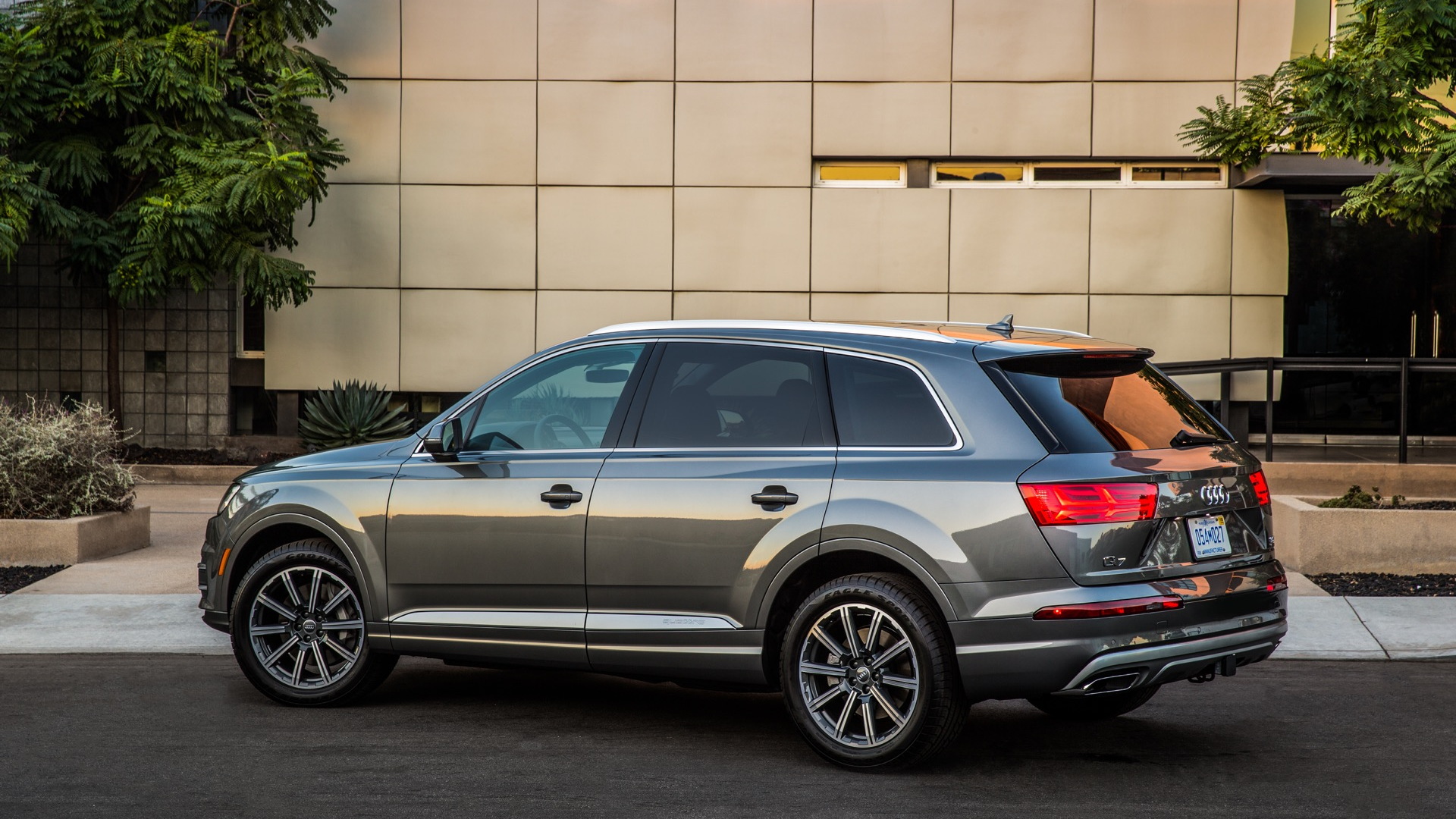 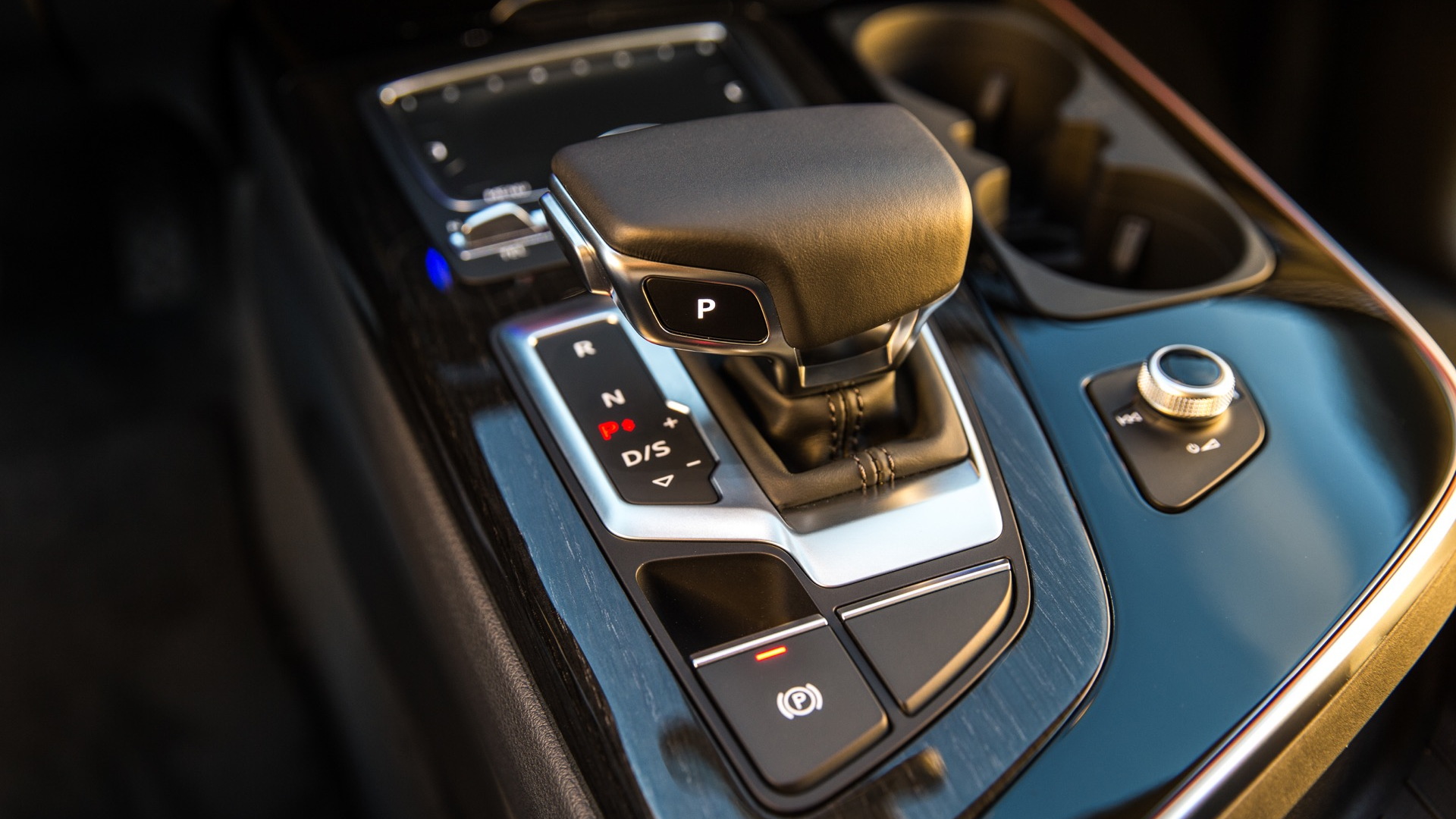 Nimble, agile, and even tossable aren’t words that you’ll often find in driving impressions of a big three-row utility vehicle. Yet they most definitely apply to the 2017 Audi Q7.

The new Q7 manages to provide a driving experience that, on tight, curvy roads, feels like that of a tidy mid-sizer. You might actually forget you’re in a tall utility vehicle that’s around 200 inches long—the length of a full-size sedan.

The 2017 Q7 is essentially the same size as its predecessor, yet it has a new aluminum-intensive body construction (alloy body panels and a structure using high-strength steels) and completely new platform. It’s nearly 500 pounds lighter (or by official U.S. specs, more like 300 pounds) and its center of mass is about two inches lower.

But it also has its tricks—like all-wheel steering. In top-trim form, with all the right option boxes clicked, this big utility wagon has a sophisticated, height-adjustable air suspension and well-tuned suspension that really work to maximize this vehicles ride quality and cornering potential.

With that top chassis combination, the Q7’s suspension soaks up the side-to-side pitchiness that can be unsettling to taller vehicles over mottled backroads, yet it’s exceptionally good in sudden weight transfers for tight corners and quick emergency maneuvers—when it doesn’t stay artificially flat but instead loads up like a good, very firmly tuned standard suspension.

The Q7 is the first SUV with four-wheel steering since GM’s Chevy Suburban and GMC Yukon XL models offered it more than a decade ago.

Just as in those vehicles—and in most models with all-wheel steering—the Q7 steers its rear wheels in the opposite direction (up to 5 degrees from center) as the front wheels at very low speeds (knocking about three feet from the turning circle) and then slightly in the same direction as the fronts at high speeds, to aid stability.

Victor Underberg, the head of chassis dynamics at Audi AG, rode along with us for an hour or so, and he helped us understand how the all-wheel steering works in the Q7.

According to Underberg, there are some serious differences in the behavior of the rear wheels between the Q7’s Drive Select modes (Comfort, Dynamic, Auto, and Individual, as well as Off-Road in some situations). The Q7’s Dynamic Mode not only reduces the maximum angle of the rear wheels in tight cornering but changes the entire way the system works in quick maneuvers and nearer to the limit.

All-wheel steering is now offered in the Porsche 911, and in the Acura RLX sedan. The Acura system requires a bit of a learning curve to understand exactly when the rear wheels are going to pivot and give you a predictable, pronounced nudge—hopefully back onto your indended, non-understeer trajectory.

German, on a French Curve

Compared to that Acura system, the Audi system provides less of the nudge and more of a consistent, French-curve-tightening of your cornering arc. From the driver’s seat it feels as if the vehicle is no longer pivoting around its rear wheels but, momentarily, a point a lot closer to your tailbone. It’s slightly unsettling in maybe the first few tight hairpins, as you might actually dial in more steering input than needed; but beyond that it’s completely intuitive and fluid.

Reduced to its essence, all-wheel steer helps correct for improper lane positions on curvy roads and acts as an additional window of safety. It erases some weight and pretends the wheelbase is shorter, making this three-row model feel like a two-row crossover.

And what differentiates Audi’s Auto mode—for the suspension, steering, throttle, and transmission—from those in other luxury vehicles, Underberg explained, is that it doesn’t merely switch back and forth between maps for Dynamic and Comfort characteristics; it instead builds its own, choosing the best behavior for each input.

This fancy chassis stuff is all very exclusive

There’s a very big asterisk attached to this. The all-wheel steering system and adaptive suspension are only available in a so-called $4,000 Adaptive Chassis package—which you can only add to a top Q7 Prestige model, then adding up to at least $68,300 (and likely well beyond the $70k mark with other options). Audi expects Q7s with that option to comprise less than five percent of U.S. sales.

This sounds a lot like what happened to GM's Quadrasteer, which at the time was impressive technology—though never properly packaged. GM spokesman Otie McKinley today points to the cost of that system as being more than customers were willing to pay. Let's hope Audi finds a way to bring this system to more Q7s.

The good news is that the standard-issue Q7, with its steel-spring suspension (yes, there are plenty of aluminum alloy components underneath, too) drives nearly as well. It doesn’t tweak the laws of physics in quite the same way, or completely quell side-to-side pitchiness in quite the same way, but it’s predictable and progressive and still makes this big crossover feel quite nimble.

And what you get in powertrain performance is the same across the entire model lineup, for now. The Q7 is powered by Audi’s now-familiar 3.0-liter supercharged gasoline V-6, making 333 horsepower and 325 pound-feet of torque, and mated to an eight-speed ZF automatic transmission. Diesel and Hybrid models are on the way, and more fuel-efficient, value-priced 2.0T model will be brought into the mix later in the model year; but in the meantime, EPA ratings for this engine are at 19 mpg city, 25 highway, and over around 250 miles of pretty rapid twisty-road driving, over several vehicles, we saw an average around 20 mpg.

The air suspension might help both high-speed fuel efficiency and driving ease on the trail or in heavy snowfall, as it raises the ride height 2.4 inches in the Offroad setting and automatically lowers the height an extra 1.2 inches below normal in high-speed 99-mph-plus) driving. Towing capacity is 7,700, provided you’ve ordered the towing package, and that capacity is the same whether you have the rear-wheel steering system and air suspension or not.

The 2017 Audi Q7, like most of its luxury-badged, three-row rivals, is loaded with active-safety and connectivity technology; keeps its occupants ensconced in a comfortable, secure cabin; and has all the tough, all-weather capability most families would ever want for the weekend ski trip.

The Q7 has a tremendous amount of active-safety features built in. Among the ones you might not encounter in other luxury vehicles is Turn Assist, a feature that will scan oncoming traffic and actually save you from yourself if you try turn left at what it judges to be an inopportune time. The other is Vehicle Exit Assist—essentially a feature that scans traffic on the left and keeps you from opening the door when a vehicle is approaching (or “dooring” a cyclist).

The Q7’s sumptuous cabin appointments, which are now warm and curvaceous and feel influenced by modern (or retro-mod) furniture, even play a part in the communication, with light piping that flashes brightly (or blinks) to the relative threat level—with the exit assist, for example.

Packaging has been rejiggered. in the Q7, with the second and third rows both placed farther back within the cabin and lowered slightly. Through some other packaging magic, including a somewhat thinner seat design, the Q7 makes some significant gains in passenger space. The lower cargo floor, enabled by better suspension packaging in the new platform, help bump cargo space behind the third row up to 14.8 cubic feet. Yet in seat folding, Audi should take a long look at its Japanese and American luxury rivals, as this one offers neither convenient one-hand operation nor a space-maximizing layout that tucks the second row completely forward or down.

Audi has topped off this top-notch cabin ambience with some old-fashioned noise insulation and smart sealing throughout; they’ve managed to pull off such a quiet cabin without the use of active noise cancellation technology.

Of course, inside, the Q7 offers the latest generation of the automaker’s Multi-Media Interface (MMI) infotainment system, here offering the best of both worlds with the freestanding screen plus the Audi Virtual Cockpit gauge cluster that made its debut in the TT. And here, each of those displays has its own equally fast and capable Nvidia Tegra 30 processor for lag-free operation and great search functionality.

Three-row utes don’t often bring a satisfied smile to your face during rapid driving on twisty two-laners; yet the Q7 breaks free of that third-row stigma. And it does so with plenty of tricks that parents are bound to appreciate.