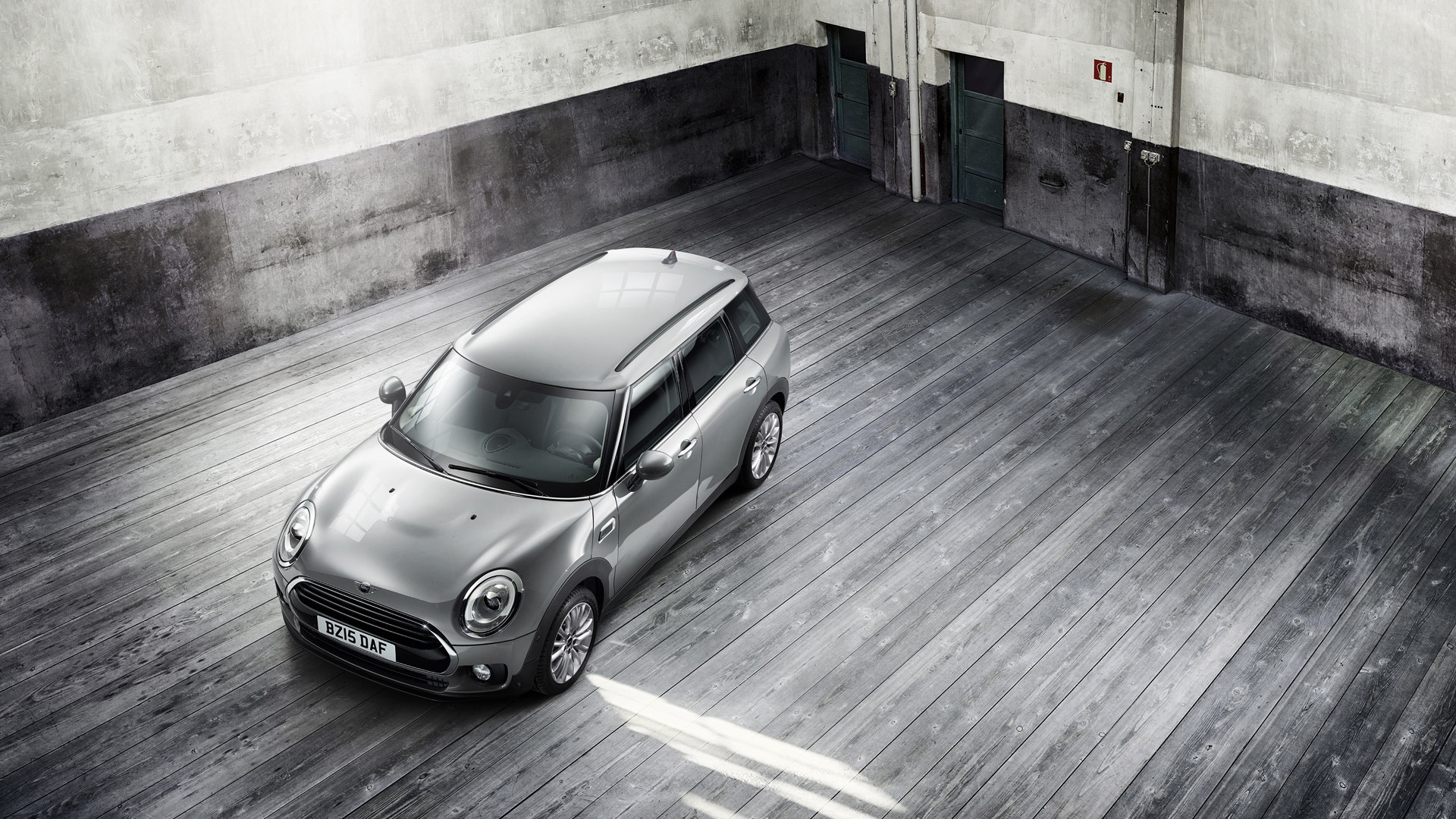 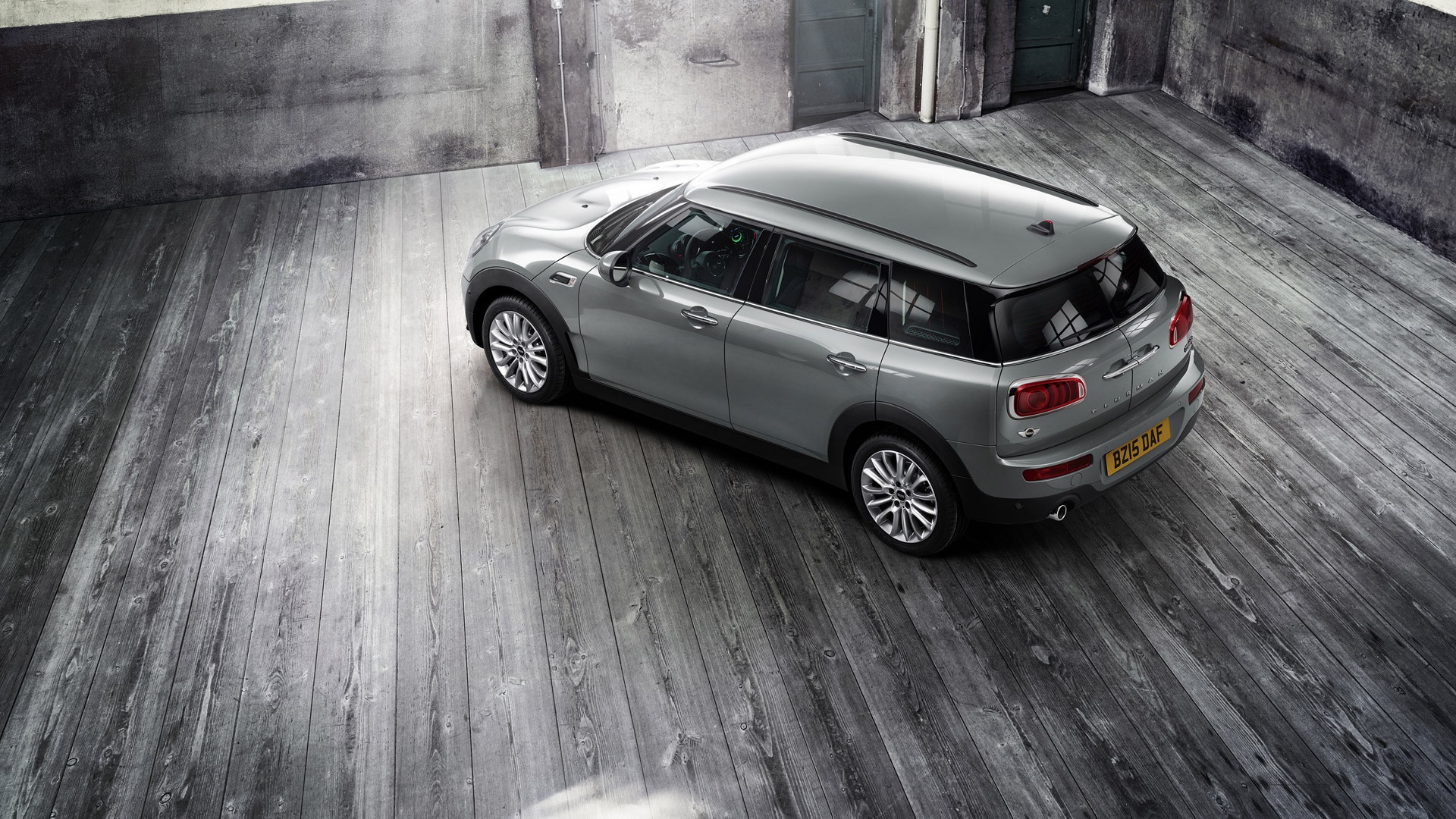 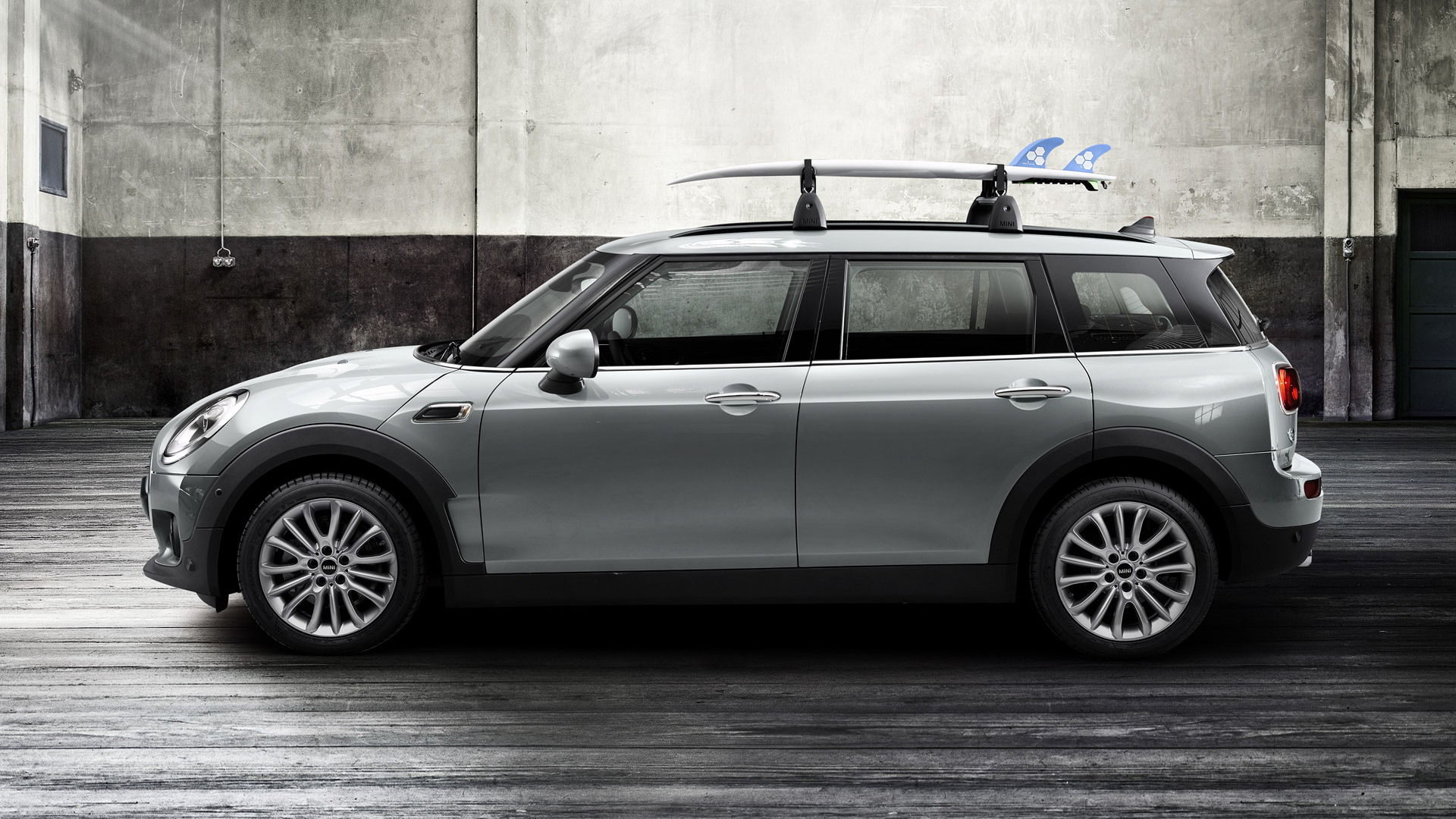 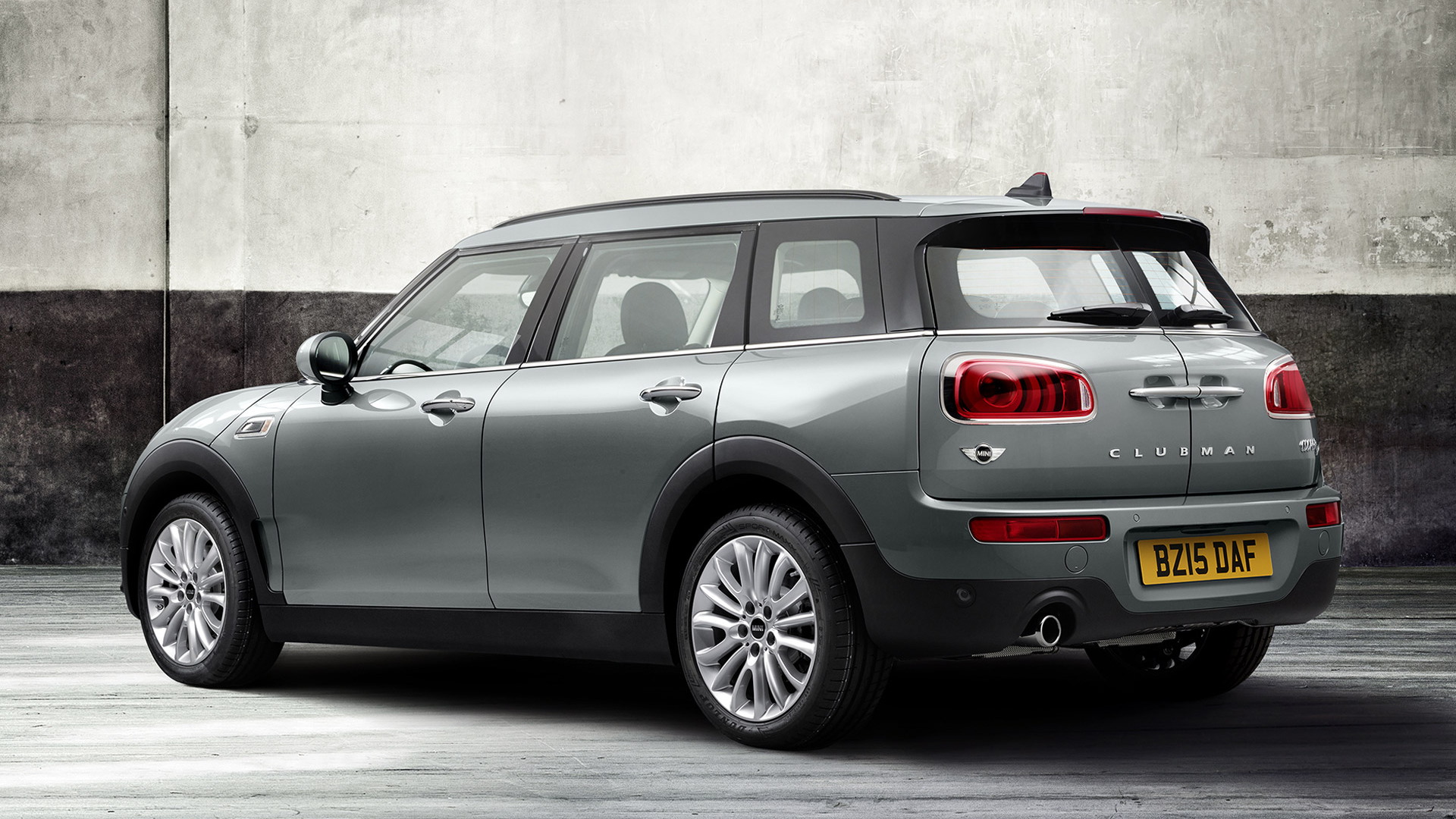 MINI is now in its second decade under the BMW aegis, and apparently, it's time for some soul-searching.

Breathe easy, now. The Cooper is fine. Even though it's bigger than ever, it's also a pretty nimble, fun-loving hatchback, even with a three-cylinder engine. It's unscathed by the reshaping going on further up the family tree.

The rest of the MINI range, well, it's being pruned like so much privet. The helmet-headed Cooper Coupe and its concomitant Roadster? Axed. The two-door Paceman? Can't be long for this world, can it?

Proliferation is dead or dying, as MINI is refocusing its fortunes on the Cooper essentials and the Countryman crossover SUV. On the Cooper front, there's a new five-door model, and a convertible is on the way. The Countryman's headed into a second generation, when it will share its running gear with the marvy new BMW X1.

We're missing something, right? What about the Clubman?

Hinted at by last year’s Clubman concept, the odd duckling in the MINI family is coming back for a second generation, too. But this time, it's addressing all its shortcomings with big changes. The odd counts of side doors have been resolved--two on each side now, thanks. It's also much longer, too, a true compact car now, one notably bigger inside than the the Hardtop four-door that now occupies the size and niche where the former Clubman sat.

But what is the Clubman if it's not the only four-door on the block? Is there a place for yet another MINI mini-wagon, one with a price tag that can approach $40,000? Or is it a Countryman without a country?
We hit the squares of Savannah, Georgia, for a first drive, in search of a rationale for the longest and widest MINI ever, and found one.

MINI's fervent hope is that, by having a car about the size of a five-door VW Golf, that the brand will be able to stop dwelling "in mom and dad's basement," as one exec puts it, and distinguish itself among a wider set of compact cars as the premium choice for wagon-friendly buyers.
If nothing else, the Clubman's new body pitches it--correctly, we think--as one of the few true wagons available in that niche. Almost a foot longer than the four-door Cooper, the Clubman's stretch is clear when it sits next door to its kin. It looks like a long, low slipper now, with all the usual MINI hints at its heritage, from the winged badge to circular headlamps. It's as relentlessly rectilinear as ever, but relieved of the weirdness of its vestigial, rear-hinged, curb-side door--though its clever and useful barn doors are still its hallmark at the cargo end of things.
The Clubman, by the way, comes in both standard Cooper and Cooper S Clubman trim. The S models get red badging, its own front fascia, and the customary slew of add-ons to make each MINI a nearly unique build.
Inside, once you're past the chirpy electronic greeting, the standard MINI cockpit awaits, with a huge circular center gauge that displays most driving information, and houses the display screen for everything from the rearview camera to navigation. Among the premium touches, there's genuine aluminum in a herringbone finish on the dash, a stitched leather dash cap, and on offer, lovely multi-adjustable sport seats trimmed in grippy fabric and leather.
DON'T MISS: Learn How A Gas Pump Nozzle Actually Works: Video
The Clubman's built in Oxford, by what we can only assume is the best-educated assembly crew in the world, where just the lunch-break banter revolves around the Pre-Raphaelite movement and expressionist poetry and frankly, is high-minded enough to give us nosebleeds.
Even better, its engines are put together in Hams Hall, which everyone in Savannah thought sounded like hog heaven. There are two engines offered: the base is a turbocharged 1.5-liter three-cylinder engine delivering 134 horsepower and 162 pound-feet of torque (169 lb-ft with overboost function). We've always enjoyed this brappy little powerplant, which runs out of passing power quickly but has a nifty low-end thrust and offbeat exhaust note that works perfectly with the Clubman's quirky fundamentals. The 0-60 mph times in the nine-second range are delivered with fuel economy of 25/34 mpg, or 28 mpg combined with the available automatic, or 35 highway with the manual.

Sportier Cooper S variants get the sizzling powerplant, a turbocharged 2.0-liter four-cylinder with 189 hp and 206 lb-ft (221 lb-ft with overboost) on tap. Of course, there's a more potent John Cooper Works model packing at least 228 hp and 236 lb-ft in the pipeline, but the turbo four's 0-60 mph times in the six-second range are amply fun in the meantime. Fuel economy reaches 24/34 mpg or 27 combined with the automatic, 22/32 mpg or 26 combined with the manual.

The standard transmission is a six-speed manual, and MINI claims credit for being the only brand to offer a manual on every model it sells, at every trim level. And it's a good manual, too, with a very light  shift action and clutch uptake, which might explain why MINI drivers #GiveAShift. The paddle-shifted automatic is exceedingly well-mannered, though--it even offers satellite-aided shifting a la Rolls-Royce, and even launch control, but is more useful for the urban scuttling that shows off the Clubman's size to its best.

Underneath the Clubman's skin, there's a new front-drive platform that will eventually underpin every BMW compact car, tough and rigid. There's electronic power steering with quick, clean responses; a multi-link suspension and available adaptive dampers, and a Driving Modes system that lets you choose how you'd like your shift quality, throttle delivery, damping, and steering weight.

Finally, the Clubman comes standard with 16-inch light alloy wheels, while the S gets 17-inchers. Wheel sizes up to 19 inches can be specified.

Skimming over the specifications, it'd be easy to judge the Clubman along the same lines as the Cooper hatchbacks -- maybe a tick slower, a bit less ready to point and shoot. But in all fairness, our driving exposure to both the hatchback and the Clubman came with asterisks. The Cooper, we piloted at medium speeds around the hillier environs of San Juan, Puerto Rico, never hitting more than 60 mph.
Savannah's roads gave us the opposite--flat roads, few corners, a handful of right-hand turns among the low-country mosquito camps. So our impressions of the Clubman aren't so much colored by the drive as carried over. It doesn't feel much different than a stock Cooper in either form, just...pulled.
That brings us back full-circle to the original premise: if the Clubman handles and accelerates much like a MINI, one that already comes in four-door form, what's the point? It's entirely in the rear-seat and cargo space. This is the only MINI Cooper we'd use to transport adults in the back seat, the only Cooper we'd consider taking for a long trip with more than two passengers. The Countryman is still the only offering with all-wheel drive, and that's the dividing line between it and the Clubman--do you want a MINI, or do you want a crossover?

CHECK OUT: These Were The 10 Most Searched Cars On Google In 2015
By the numbers, the Clubman is 168.3 inches--not even up to Escape/CR-V lengths, barely equal to a five-door Golf. Still, it's 10.9 inches longer, with 4.0 inches more wheelbase than the last Clubman. Equally important, it's 2.9 inches wider. There's just more spread-out space here, even in rear-seat headroom, to make a two-hour stint to the nearby beach a practical reality.
Loading the Clubman with stuff proves out its usefulness--there's about as much cargo space (17.5 cubic feet behind the rear seats, 47.9 behind the fronts) as in most small crossover SUVs. Instead of a top-hinged tailgate, there's a pair of smart barn doors, which spring open with available gesture control, handsfree. There's plenty of room for a dog crate and for child seats, though the cargo area looks shallow.
And that brings us to the point of a Clubman. You don't have to have a crossover to get their job done, don't have to settle for a dowdy hatchback shape when a cool long-body wagon will do. If you've ever lusted for an 1800ES or an M Coupe clown-shoe, look no further for a substitute.
Just take it easy on the order sheet. The Clubman comes moderately equipped--there's no standard rearview camera, but it does come with automatic climate control, Bluetooth, smartphone connectivity, split-folding rear seats, and power features. You'll pay for all the little things, by themselves or in bundled packages--and you'll want to add features like LED lighting, the gesture-controlled barn doors, and navigation.