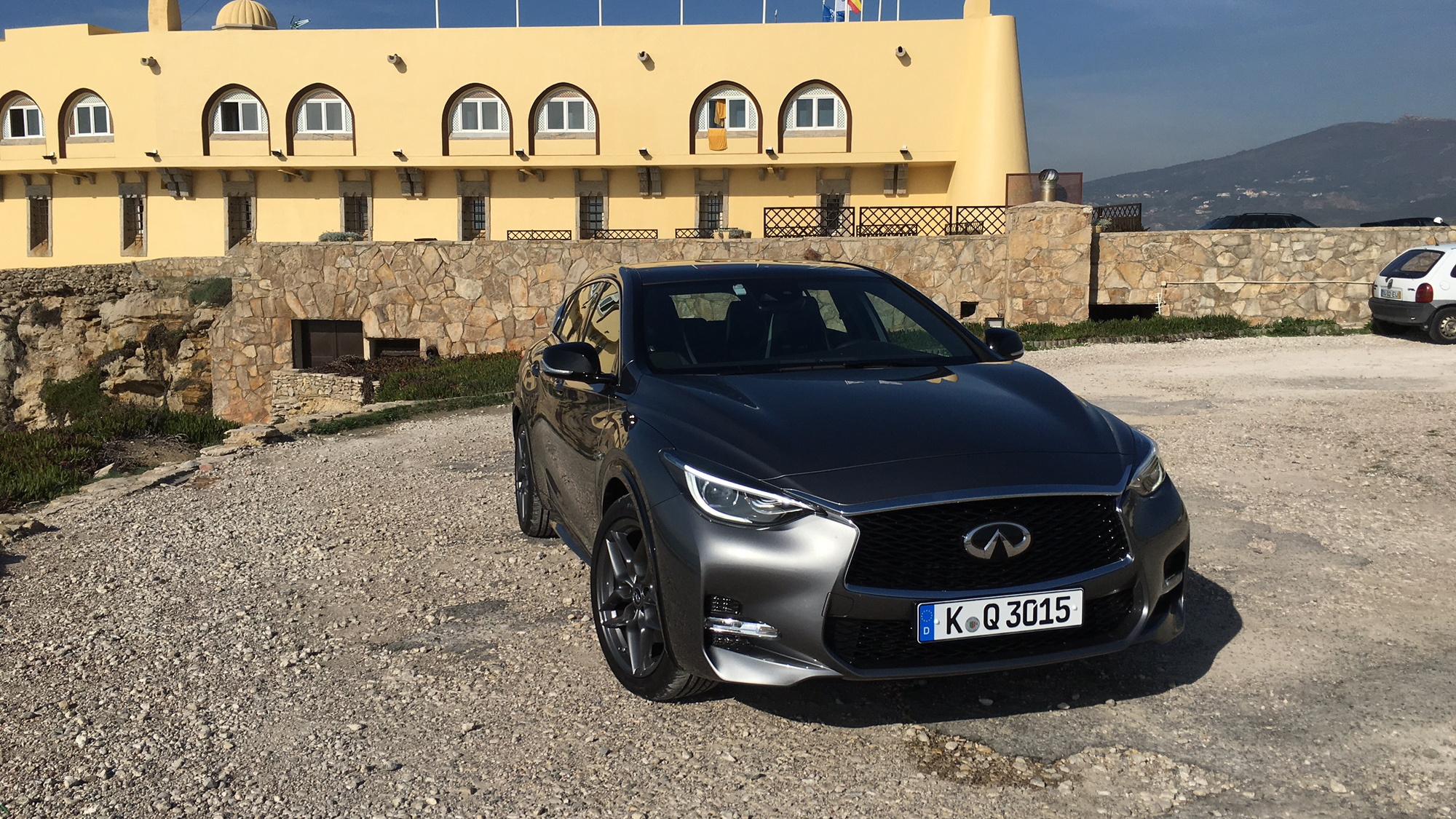 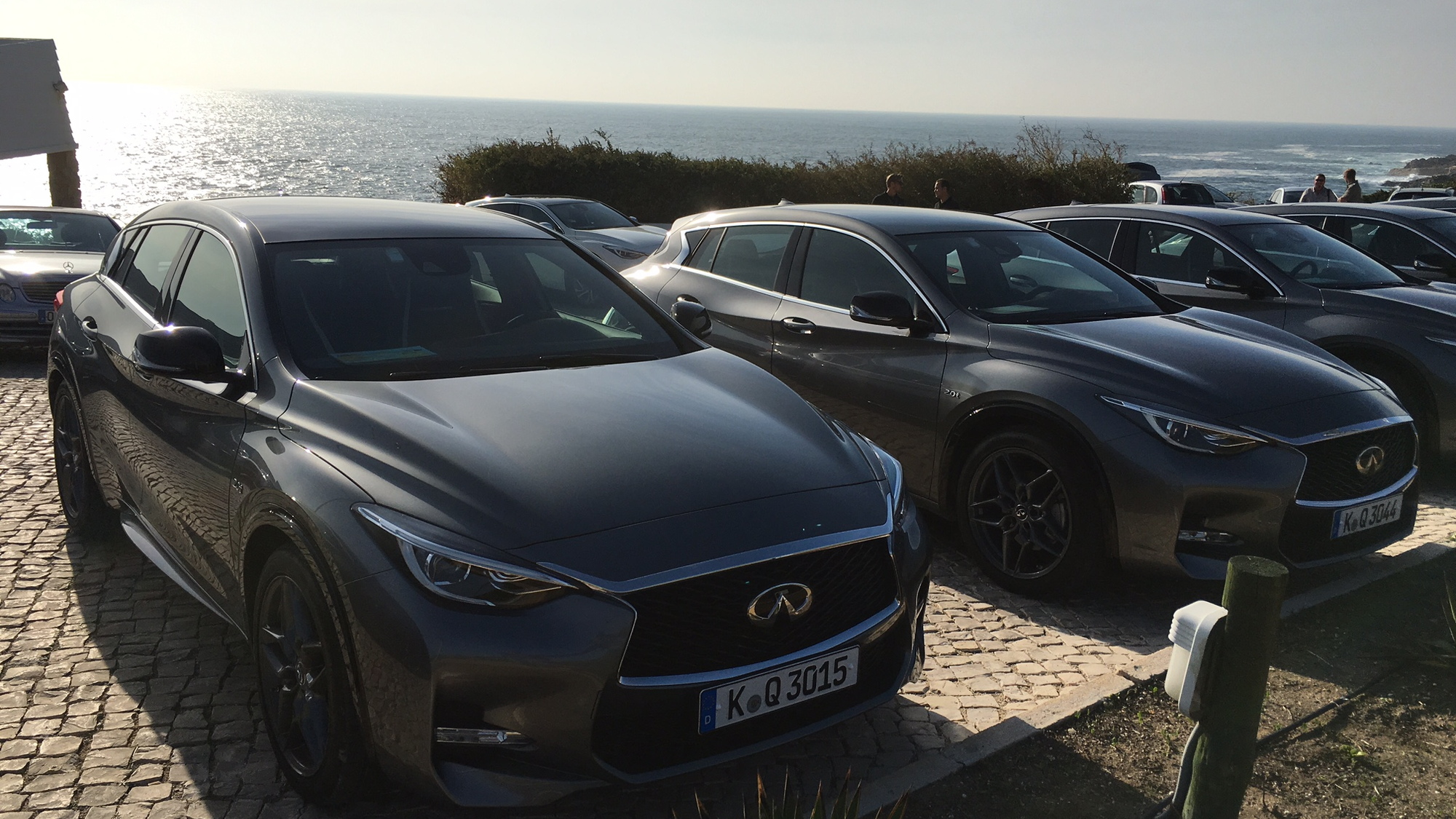 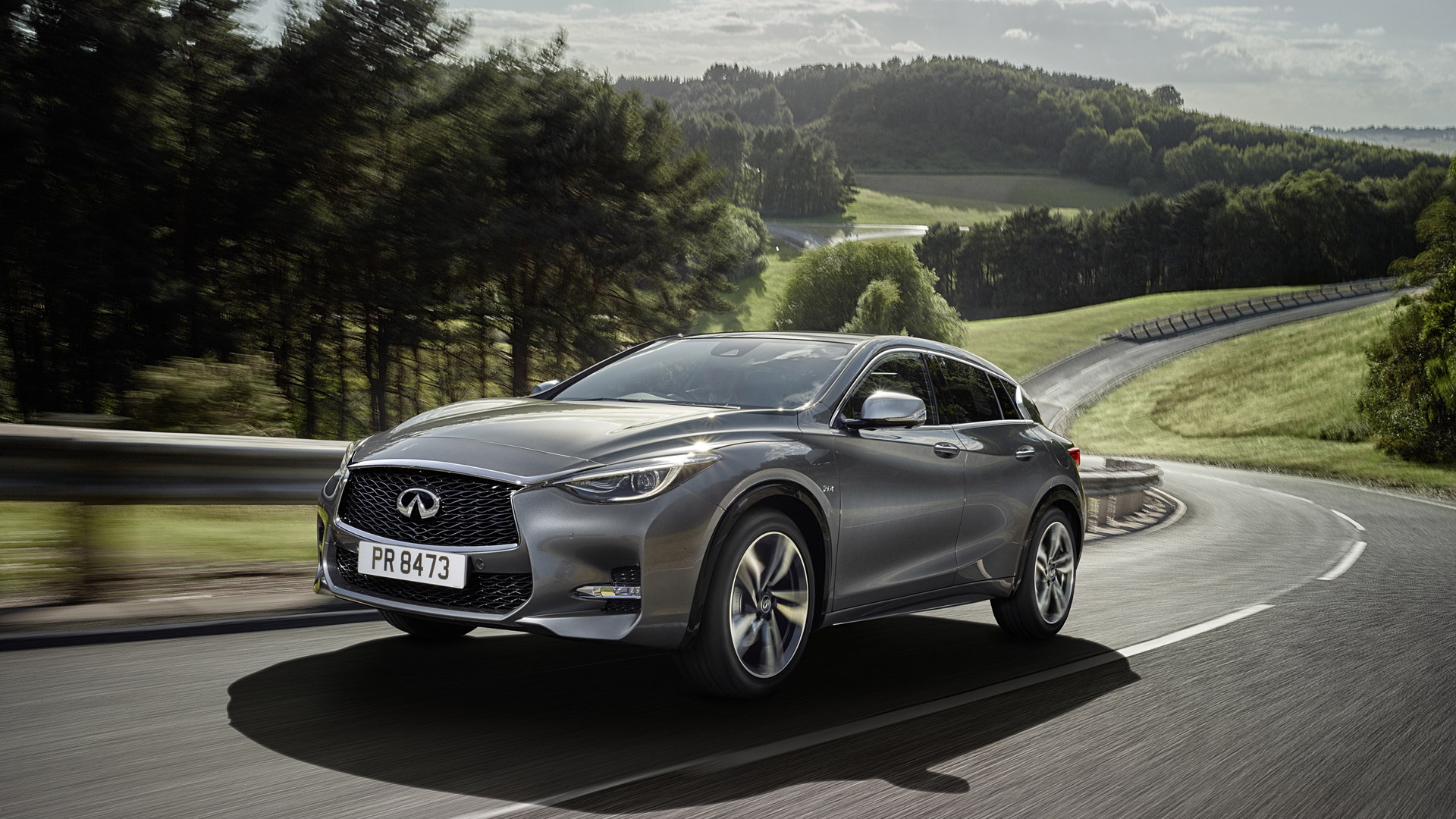 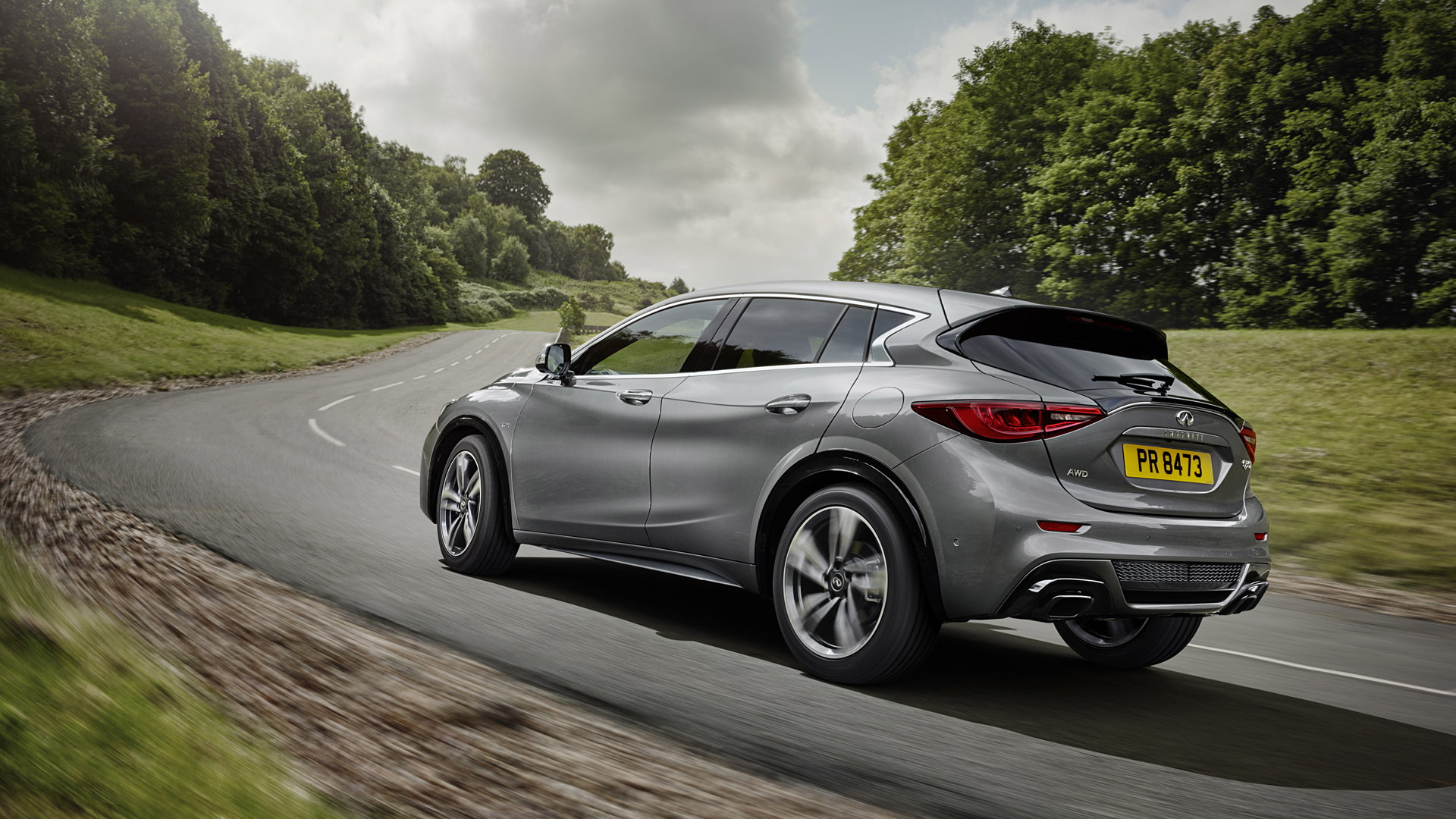 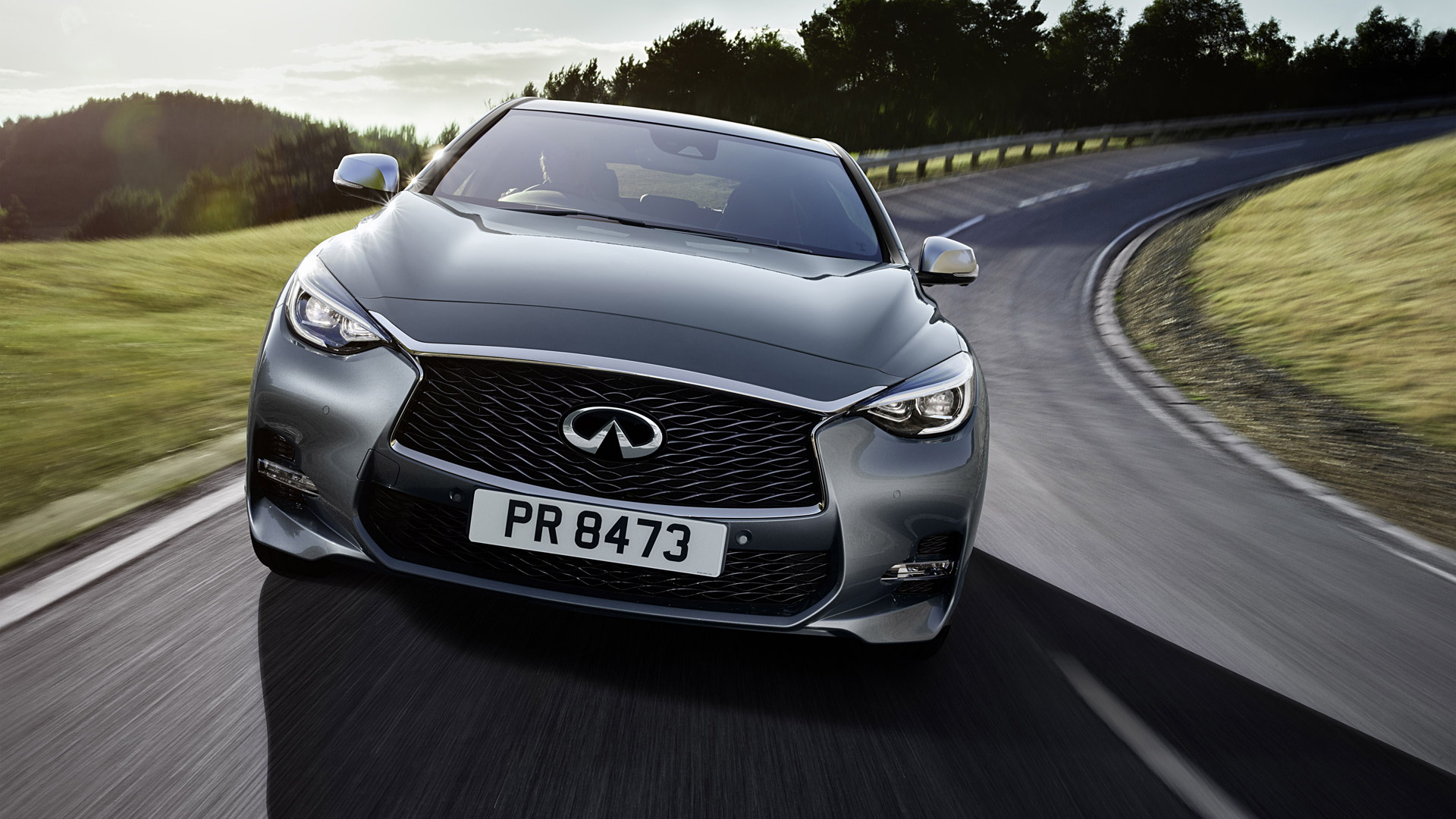 The very design of the 2017 Infiniti QX30 makes it clear that Nissan’s luxury marque—created for the United States market 25 years ago—wants to be an international player. It’s a hatchback that also blends elements of an SUV, you see, and Americans have never thought much of premium compacts without trunks. That’s why we get three-box designs like the Mercedes-Benz CLA, BMW 2-Series, and Audi A3. The rest of the world, however, thinks hatchbacks are pretty swell. So that’s what we’ll get, too.

While Americans don't love hatchbacks, we lap up crossovers by the millions. To stack the sales odds in its favor, Infiniti changed the name of this hatchback. It was originally intended to be the Q30, but Infiniti decided to change it to QX30 before it ever went on sale. The X in the name is usually reserved for SUVs or crossovers, and in this case it makes customers think this hatchback is really a crossover, even without the available raised ride height of the QX30 AWD model.

Also in its favor, the Infiniti QX30 looks just about as good as a hatchback can look, with exterior styling that’s remarkably faithful to the dramatic 2013 concept on which it’s based. Voluptuous coachwork sweeps rearward from a sharp nose, over large wheel wells and along a low-cut greenhouse, until tapering past Infiniti’s signature reverse-crescent C-pillar to a truncated tail.

The QX30’s high Franco-Japanese style continues in the cabin, where the dashboard undulates asymmetrically around a touchscreen in a wavelike motion. Piano black trim surrounding well-organized controls has a pleasingly metallic glint, and the cabin is upholstered with plastics, leather and Alcantara of good quality.

Exterior design contributes to the QX30’s greatest interior strength—and its greatest weakness. On the plus side, thanks to the length of its roof, the rear seat feels roomier than in rival sedans. But all that external swoopiness limits headroom and hinders the view outward. Taller drivers may find that the A-pillar blocks vision in turns; and a short greenhouse, meanwhile, means that passengers—even those of average height—might feel that they must duck to see out.

The cargo area isn’t that big, and the slope of the hatch does no favors for maximum capacity, but it’s acceptable for a fashion-conscious car. And unlike its direct competitors, the QX30 gains much more usable space when folding flat its split rear seat.

It’s a particular pleasure looking out over the QX30’s aggressively sculpted hood. Pop it open and you’ll find that it shares running gear with Mercedes' CLA250. Infiniti developed the QX30 in cooperation with Mercedes-Benz, and in the process gained access to the German company’s turbocharged 2.0-liter four-cylinder engine. It makes 208 horsepower and 258 pound-feet of torque, and pairs with an automated seven-speed dual-clutch transmission. This will be the sole drivetrain configuration on initial offer in the U.S.

Other markets will get two versions of a 1.6-liter gas-powered four and 1.5- or 2.2-liter diesel fours; those buyers will also have the option of a six-speed manual transmission with the less powerful 1.6 and the 1.5 diesel. The larger diesel is the most likely candidate for an expanded American QX30 lineup, but Infiniti isn’t discussing that possibility, and we weren’t given the chance to try it out during a worldwide, multi-wave launch in Lisbon, Portugal.

We will, however, get all-wheel drive, but it will only come in the QX30 AWD, a model with a raised ride height and off-road-oriented front and rear valence panels. The QX30 was originally intended to be a separate crossover model, but it is now just part of the larger QX30 lineup.

Like the CLA250 and the related GLA250, the QX30 is quick enough. But the Infiniti seems to exhibit less of the indecision we’ve observed in the Mercedes-Benz. It responds quickly to throttle inputs, the gearbox doesn’t hesitate in search of the right gear, and acceleration is relatively seamless. Another complaint about the CLA250 is the jarring action of its engine start-stop system; it’s clearly perceptible in the QX30, but not as intrusive as in many other cars we’ve driven.

According to Infiniti, its engineers devoted untold energy to the development of steering characteristics with the goal of consistent feel at any speed. In our short time with the QX30 they seem to have hit their target. Steering is not, however, quite as quick and engaging as it could be.

The vehicles we tested were QX30S models with a ride height that’s 0.6 of an inch lower than the standard QX30 and 19-inch wheels instead of the usual 18s. Initial impressions of its handling are that it’s crisp, assured, and predictable. Oddly, however, our testers came with all-wheel drive, which will only be offered in the QX30 AWD on our shores. Nonetheless, American-bound cars with front-wheel drive shouldn’t behave much differently.

We don’t yet have full equipment information and pricing on Infiniti’s new entry-level compact, but the 2016 Mercedes-Benz CLA250 has a base MSRP of $32,050 and it stands to reason that the Infiniti QX30 will have a price in that general neighborhood. The showroom launch is scheduled for the second quarter of 2016.

So, can Infiniti’s premium hatchback succeed in an American market where others have failed? It’s entirely possible. The Infiniti brand doesn’t quite have the cachet of Lexus, but its QX30 isn’t just emulating the Germans. Underneath, it is German.