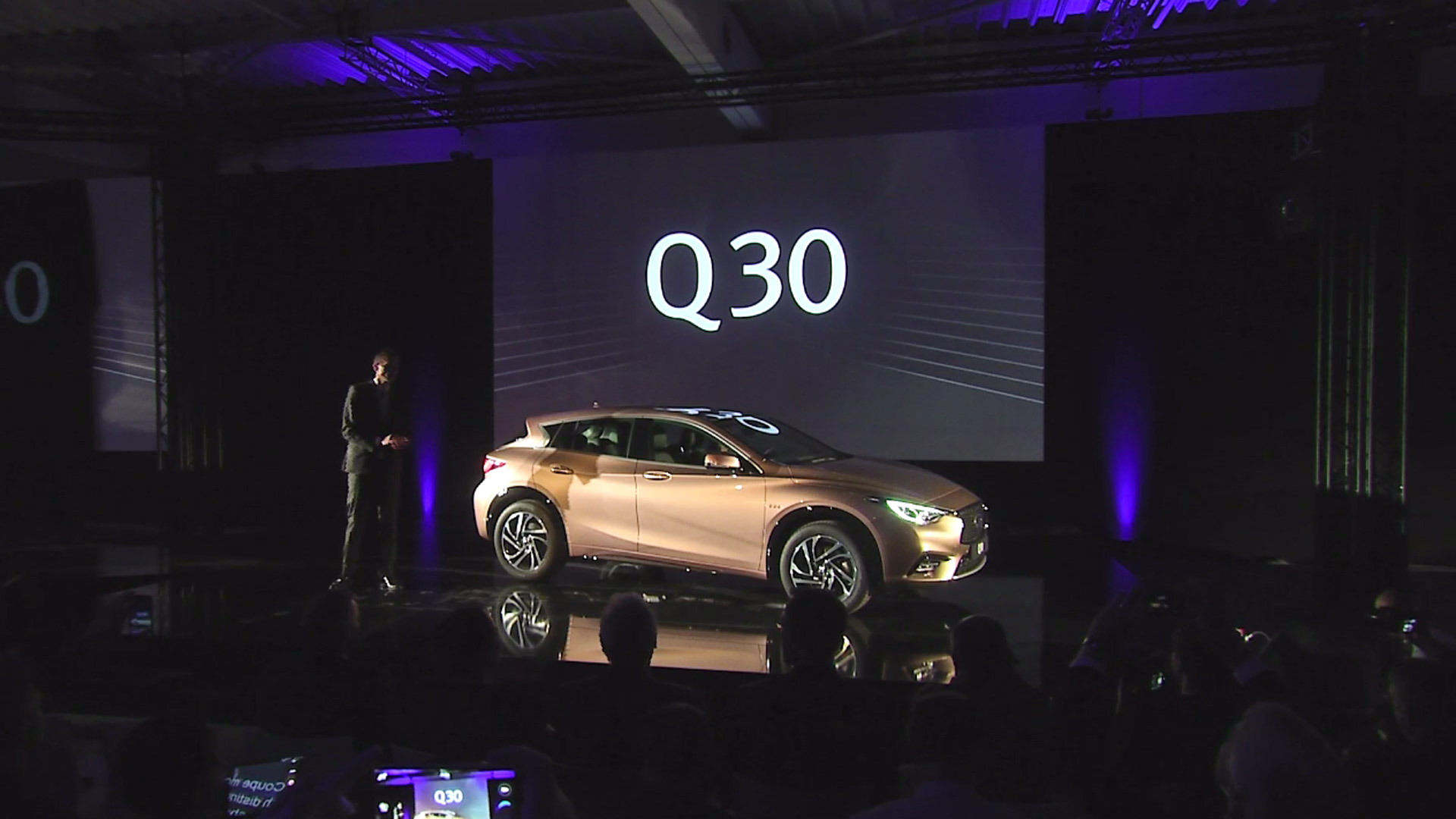 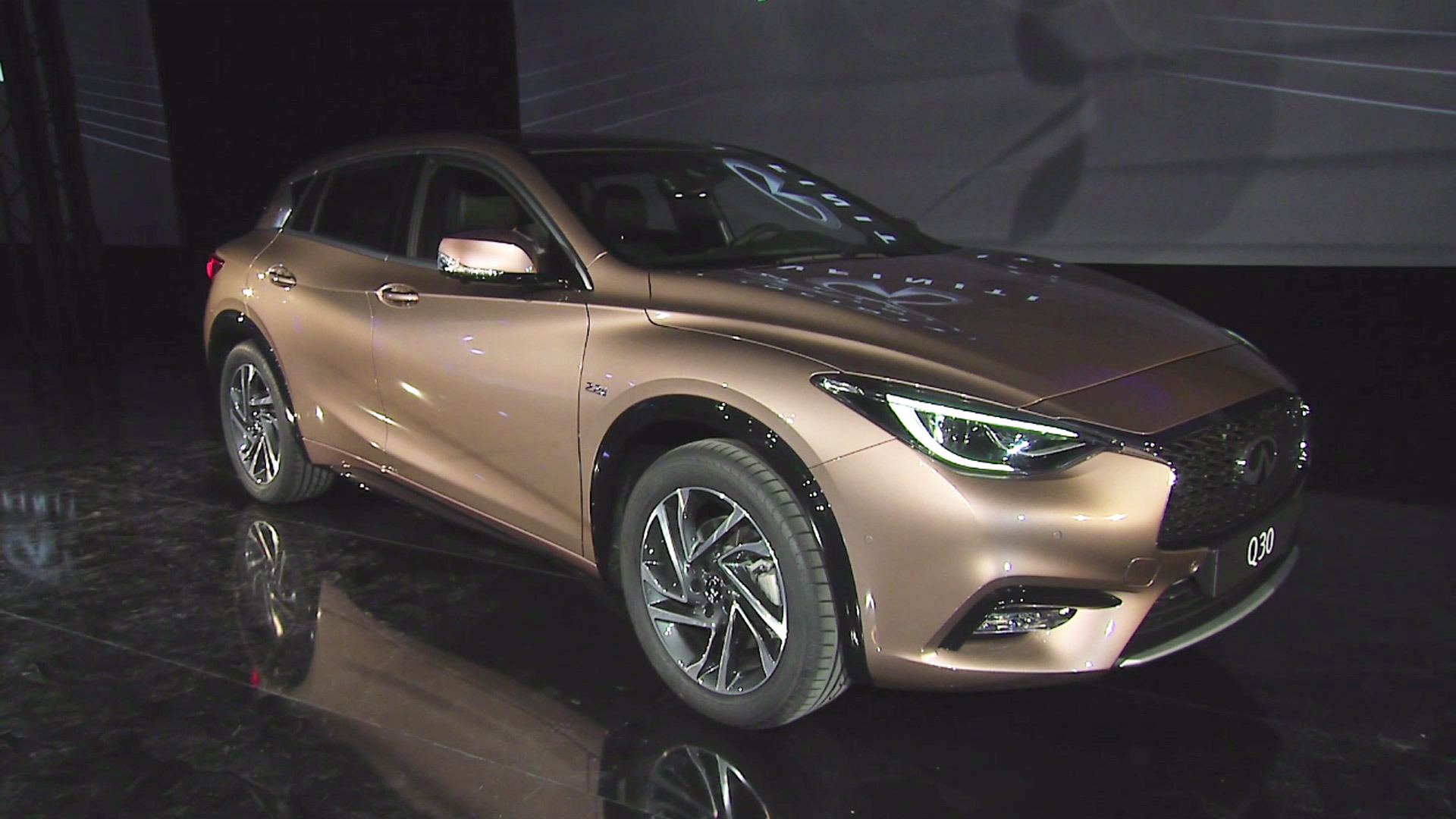 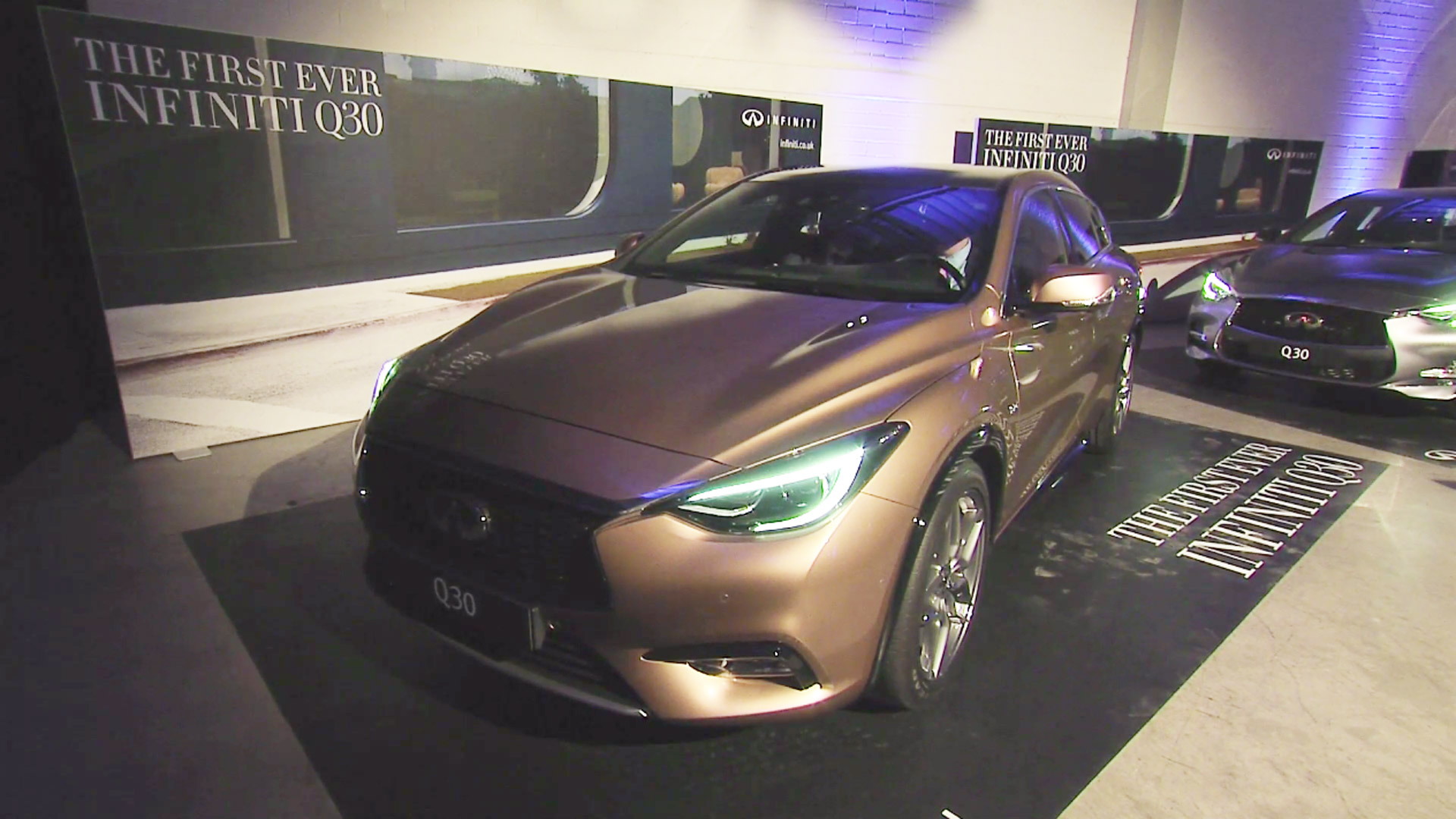 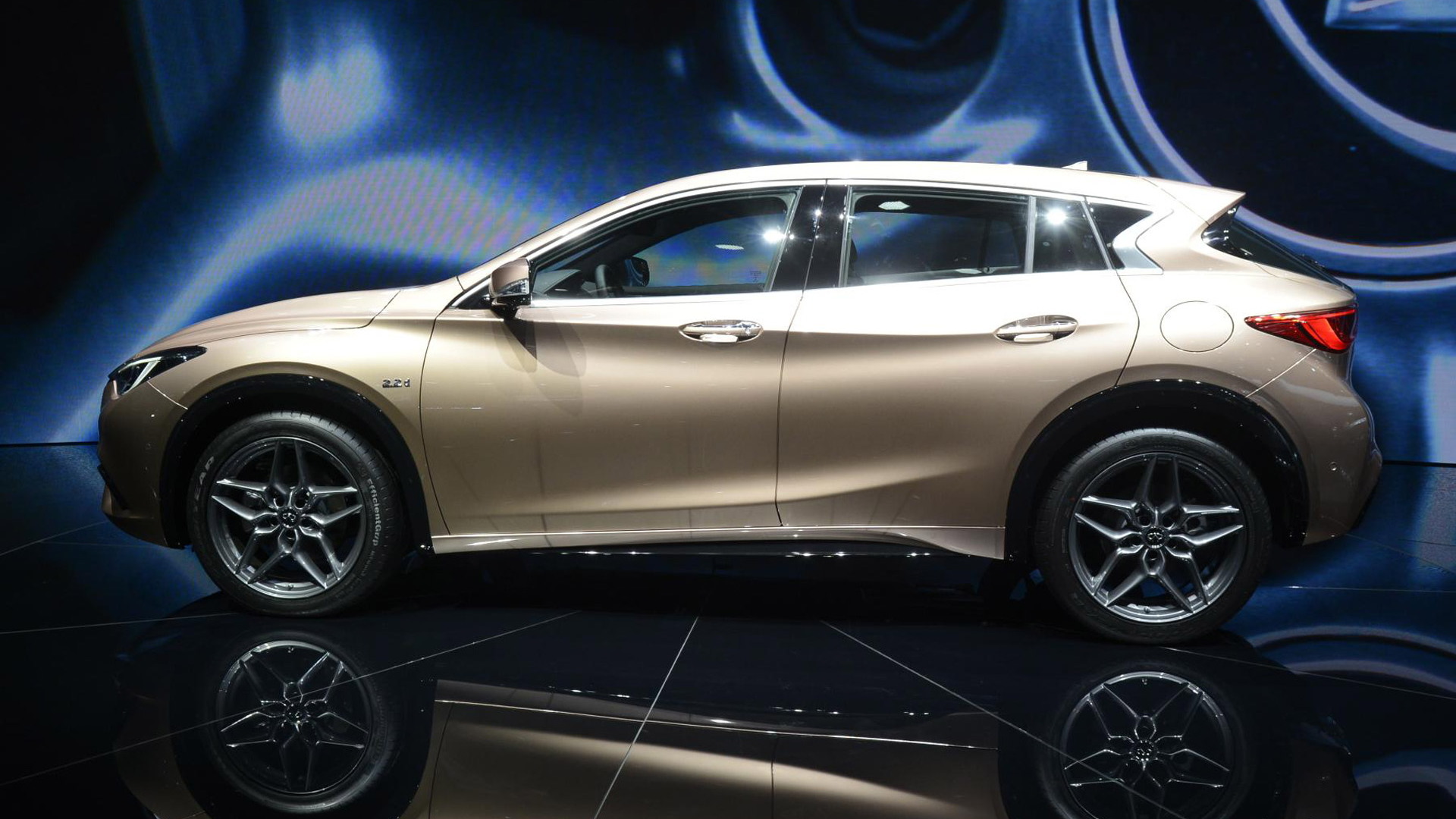 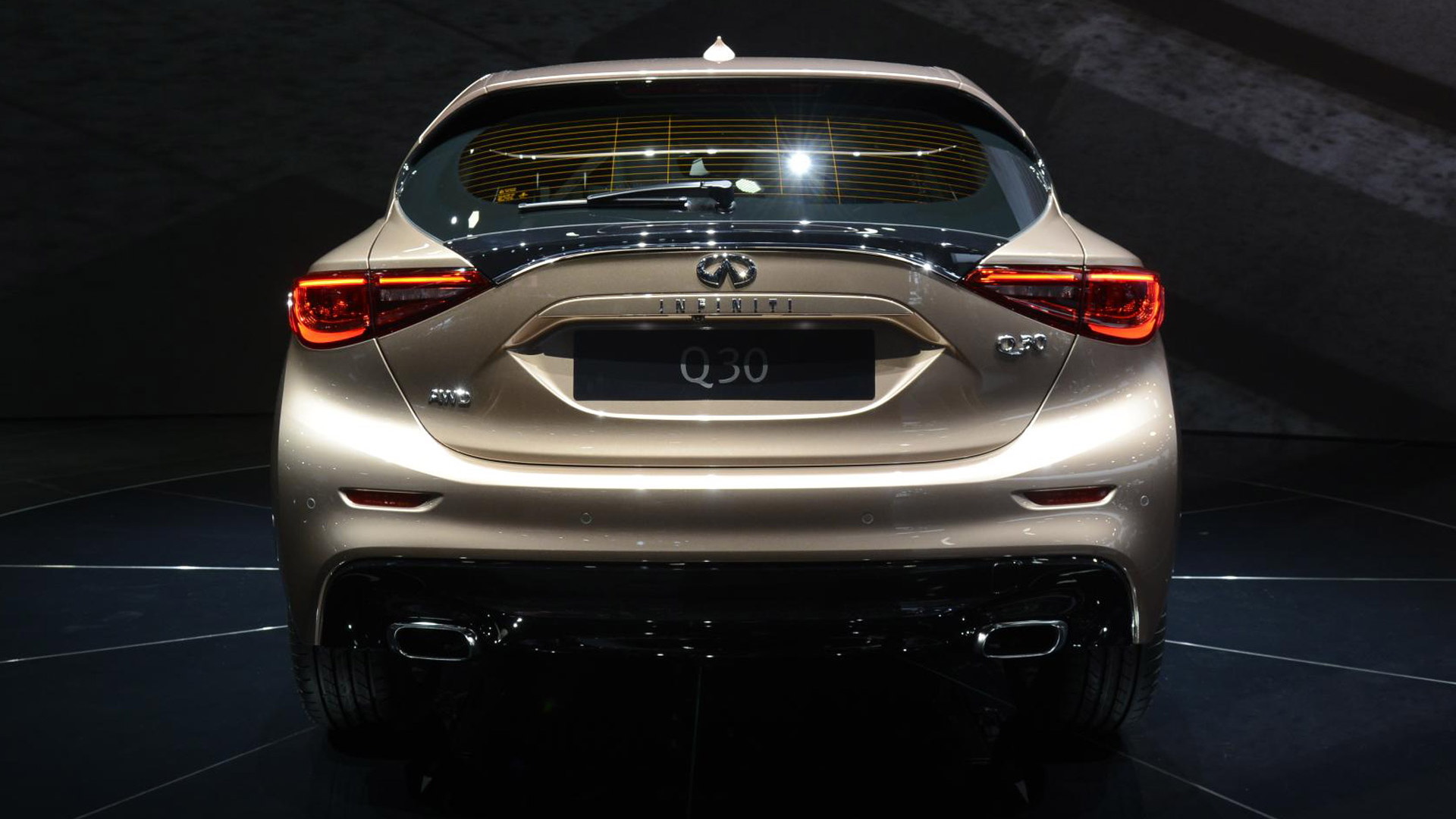 Infiniti’s major announcement for this week’s 2015 Frankfurt Auto Show is the all-new Q30 compact hatch. It was at the German show two years ago that Infiniti first previewed the Q30 with a thinly-veiled concept version. At the time, Infiniti stressed that the vehicle wouldn’t be an ordinary hatch but rather a fusion of various bodystyles that included elements of a hatch plus those of a coupe and a crossover.

After finally seeing the Q30 in person, we can confirm that it does in fact eschew the normal ride height found on most hatchbacks in favor a taller design. The hope is that by combining the sportiness of a coupe, the roominess of a hatch and the higher stance of a crossover, the Q30 will be able to stand out from the crowd. Remember, it will be going up against established rivals such as the Audi A3, BMW 1-Series and Mercedes-Benz A-Class.

Inside, the designers have gone for a driver-focused layout, and here too things have been made taller. Infiniti says the driver and passenger seating have an elevated hip-point, which should help ingress and egress though it may lessen the feeling of sportiness. Premium materials throughout the cabin create a nice ambiance. One of these is a suede-like material known as Dinamica which is used for the headliner and pillars.

Power comes from a range of four-cylinder gasoline and diesel units. For the base Q30, the gasoline engines deliver between 120 and 154 horsepower. The diesels, meanwhile, deliver between 107 and 168 hp. In addition to the base Q30, there is also a Q30 Premium and Q30 Sport. These come with a 2.0-liter four-cylinder gasoline engine good for 208 hp. Note, this will be the sole engine offered on the Q30 in the United States.

Transmission options include six-speed manual and seven-speed dual-clutch units for most markets, but only the latter is expected in the U.S. Front-wheel drive is standard on the Q30 but all-wheel drive is available.

As previously reported, production of the Q30 will be handled at a Nissan plant in Sunderland, England. Shortly after the start of production, Infiniti will add production of a Q30-based crossover to the plant. Called the QX30, the crossover has already been previewed in concept form and is due for a debut at November's Los Angeles Auto Show. Infiniti tells us that it will be distinguished from the Q30 by an even taller ride height as well as visible underbody protection. Sales of both vehicles has been confirmed to start in the U.S. in the second quarter of 2016. They arrive as 2017 models.