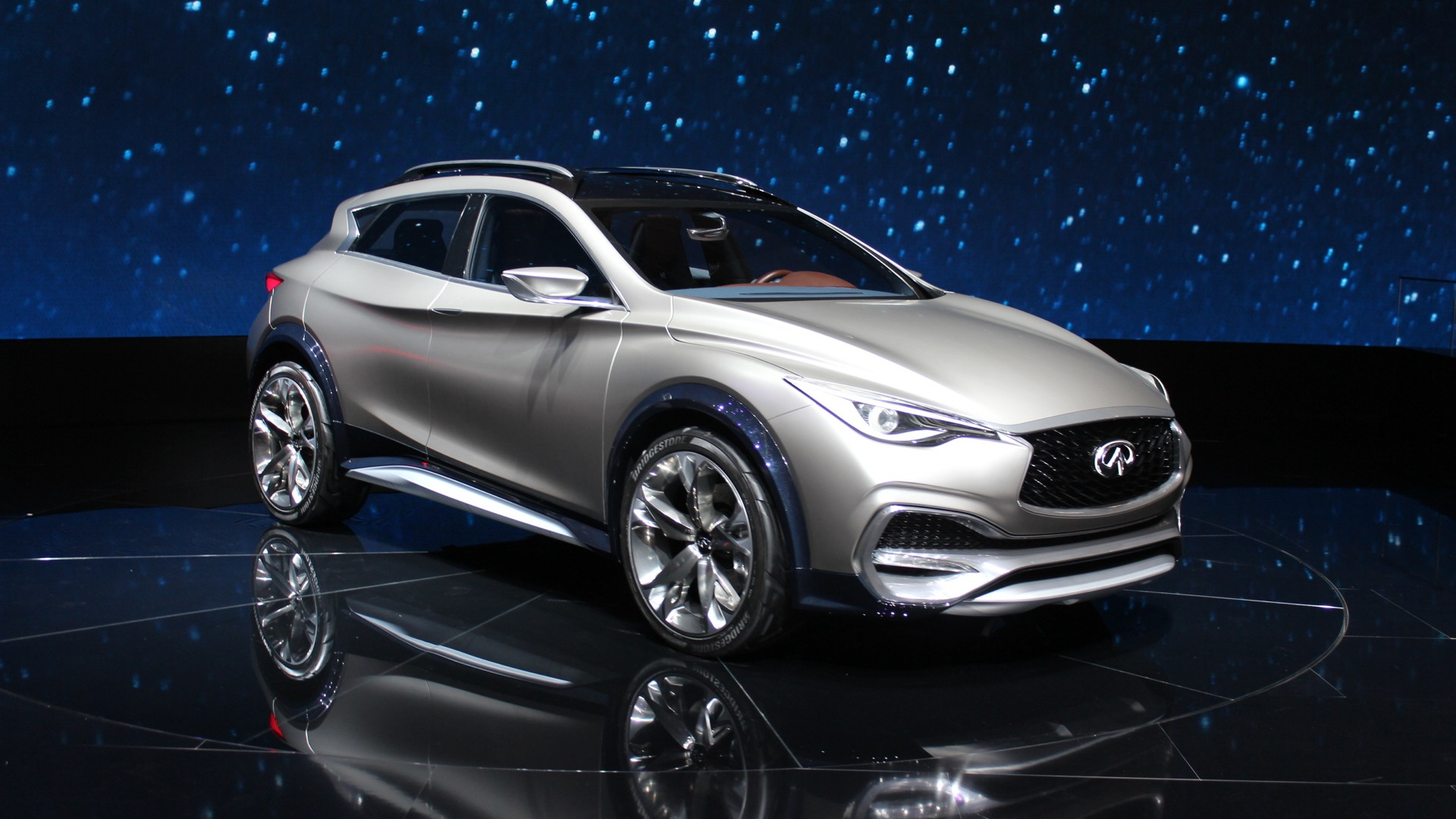 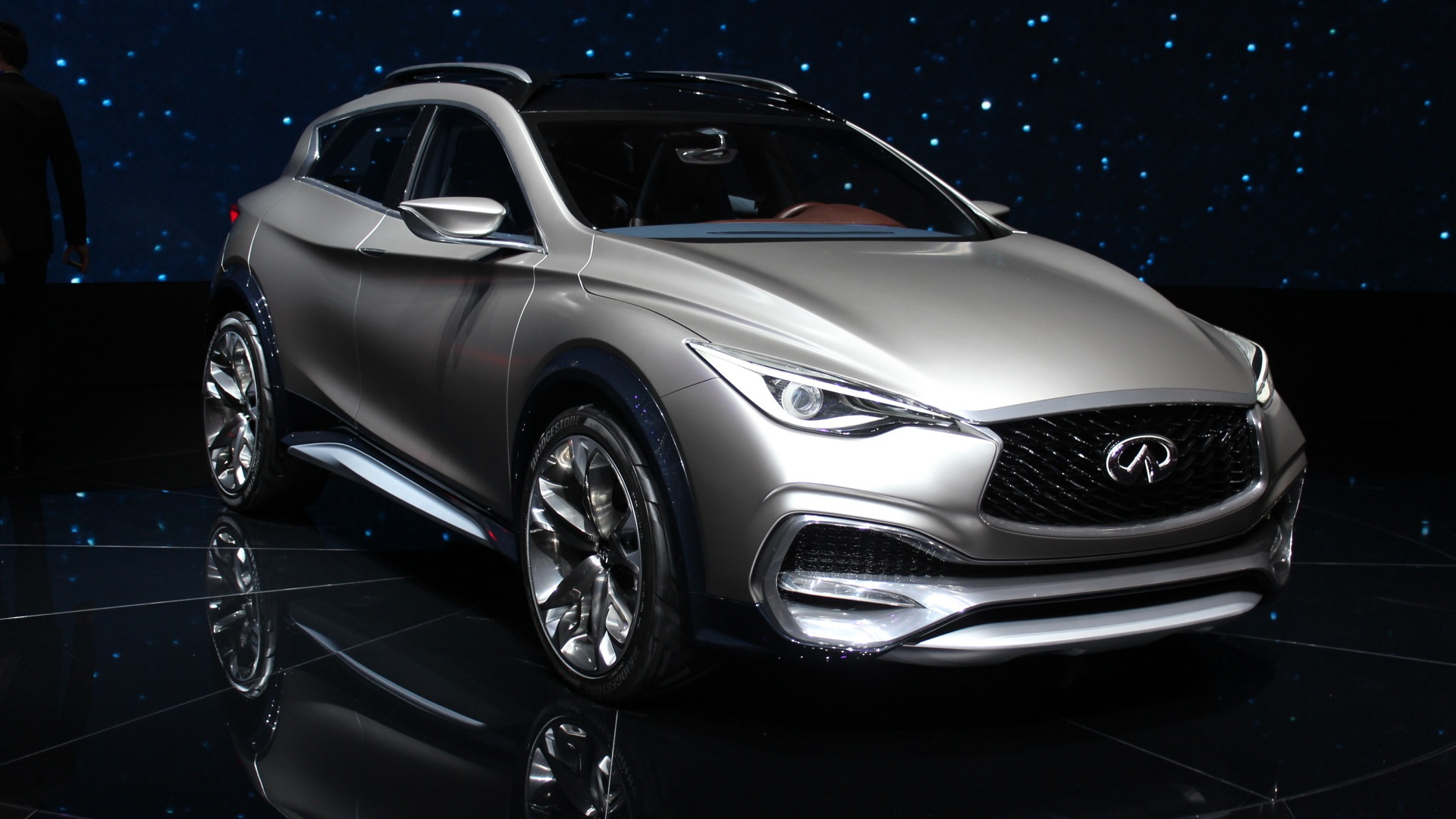 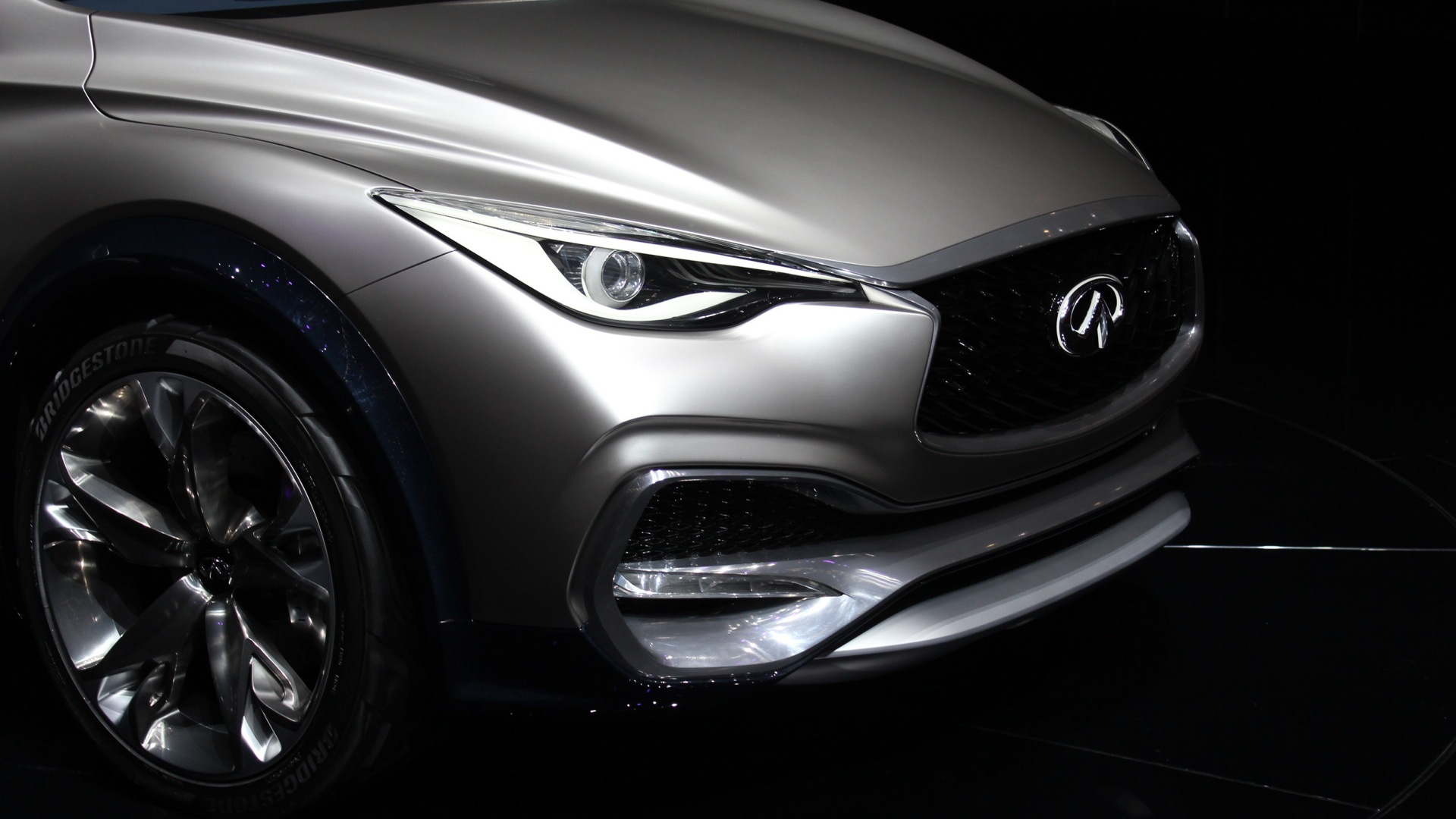 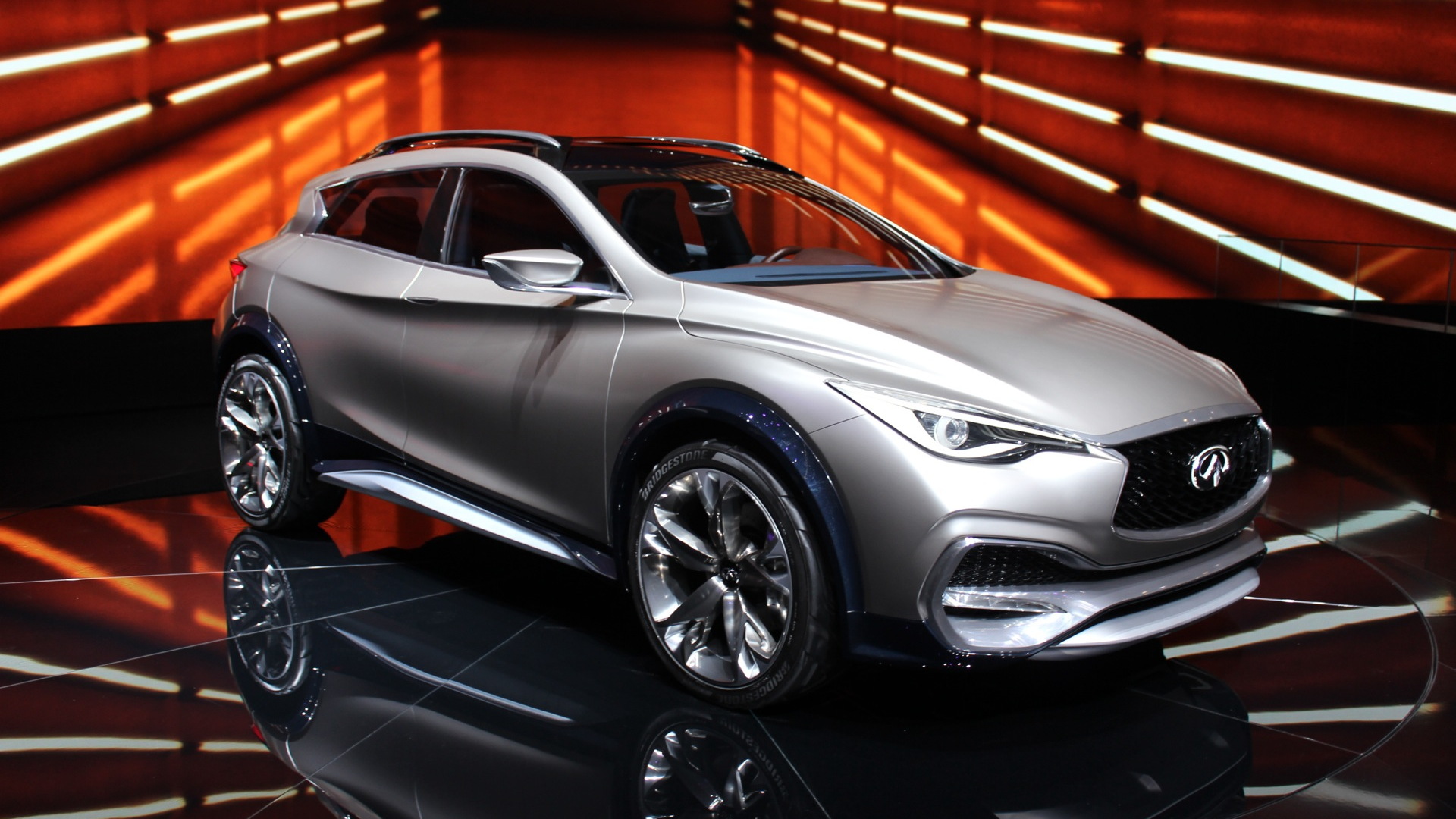 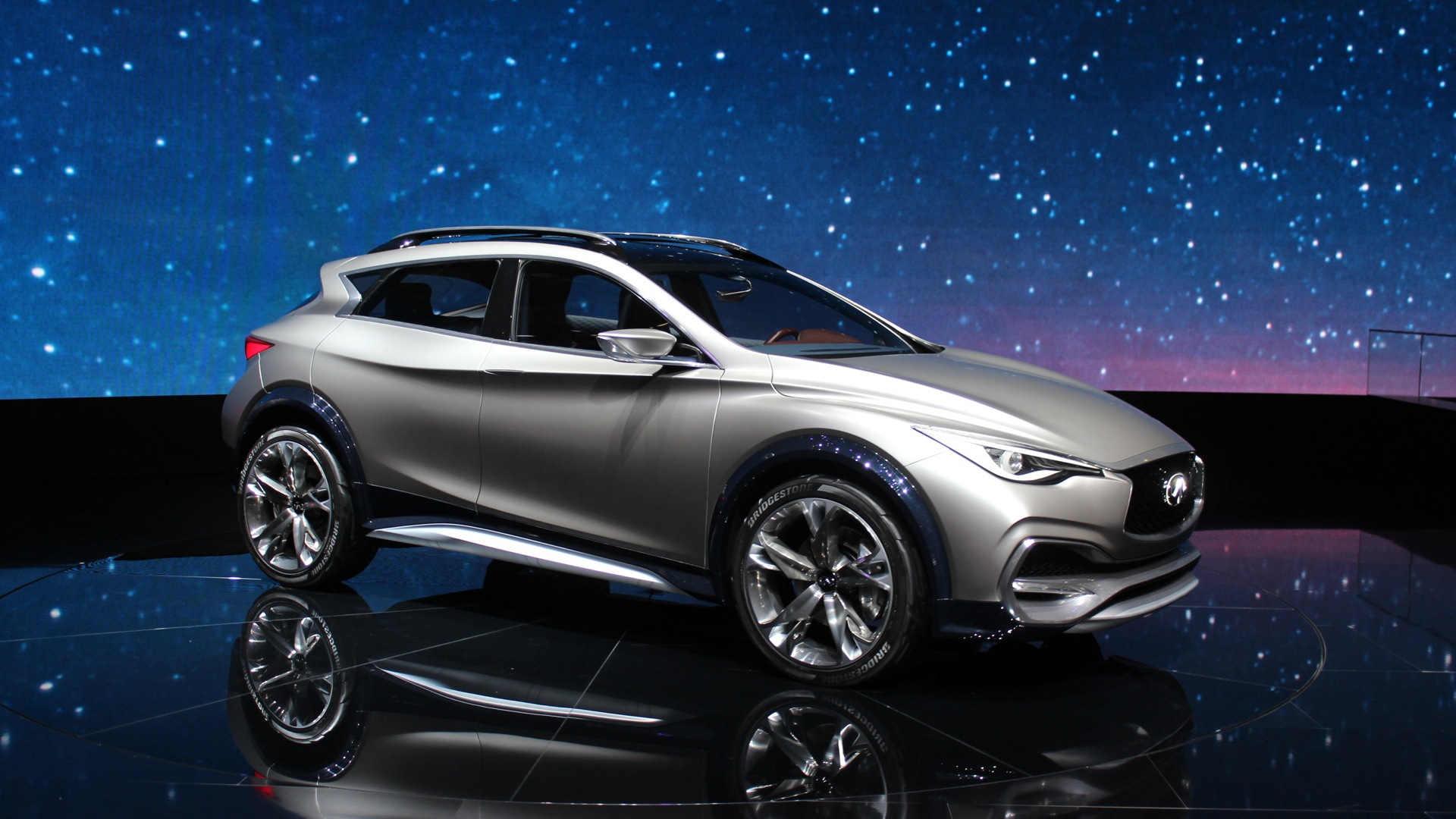 It’s been known for some time that Infiniti is planning a crossover version of its upcoming Q30 compact hatch, and this week, at the 2015 Geneva Motor Show, we've been given our first official look at the vehicle thanks to a new concept car. The concept is called the “QX30”, and it is essentially a thinly-veiled preview of Infiniti’s production QX30 due in showrooms next year.

The QX30 concept combines the sleek lines of a coupe with the rugged looks and commanding seating position of a crossover or SUV, and judging by these shots it certainly looks that way. The vehicle also wears protective panels on its lower portions to help prevent nicks and scratches to the painted surfaces, once again hinting at its off-road capability.

This theme of good looks combined with utility, or “stylish  protection” as Infiniti describes it, is evident from nose to tail. For example, the design team, led by Infiniti chief designer Alfonso Albaisa, has given the QX30 concept a more pronounced aluminum-trimmed bumper up front, while rounding up the rear with a tough skid plate. Other details include 21-inch aluminum wheels with large profile rubber, sculpted roof racks, a panoramic sunroof and even some carbon fiber in the lower cladding.

For the interior, the designs have gone with a bold, somewhat dark theme. Four seats are present, and these feature a slim, streamlined look to convey a sense of low weight. The U-shaped seat frames are partially wrapped with a layer of premium Connolly saddle leather offset by blue stitching, and the contrast between the exposed and covered parts of the frame creates a 3D-look. Infiniti’s InTouch infotainment system is also featured.

Power in the QX30 concept comes from a turbocharged and direct-injected 2.0-liter four-cylinder engine. The engine is mounted up front and spins all four wheels via a seven-speed automatic transmission. Infiniti says a wide variety of powertrains will be offered in the production QX30, including some diesel units.

Infiniti has confirmed both the QX30 as well as the Q30 hatch derivative for sale in the U.S. However, the vehicle's target market will be Europe where the premium compact class is dominated by German brands Audi, BMW and Mercedes-Benz. Production will take place at a Nissan plant in Sunderland, England, with the Q30 due to roll off the line later this year and the QX30 sometime in 2016.

“QX30 concept foreshadows an entry in the premium compact segment that provides a stylish alternative to the existing offer in this segment,” Infiniti chief Roland Krueger said at the reveal. “The vehicle embodies our conviction to give customers the freedom to go wherever they want, whenever they want—in a style that turns heads and makes a statement.”

Sharing the stage with the QX30 concept in Geneva this week is Infiniti’s stunning Q60 concept, which previews the automaker’s next-generation Q60 coupe also due in 2016. To see what else is at the Geneva Motor Show, head to our dedicated hub.