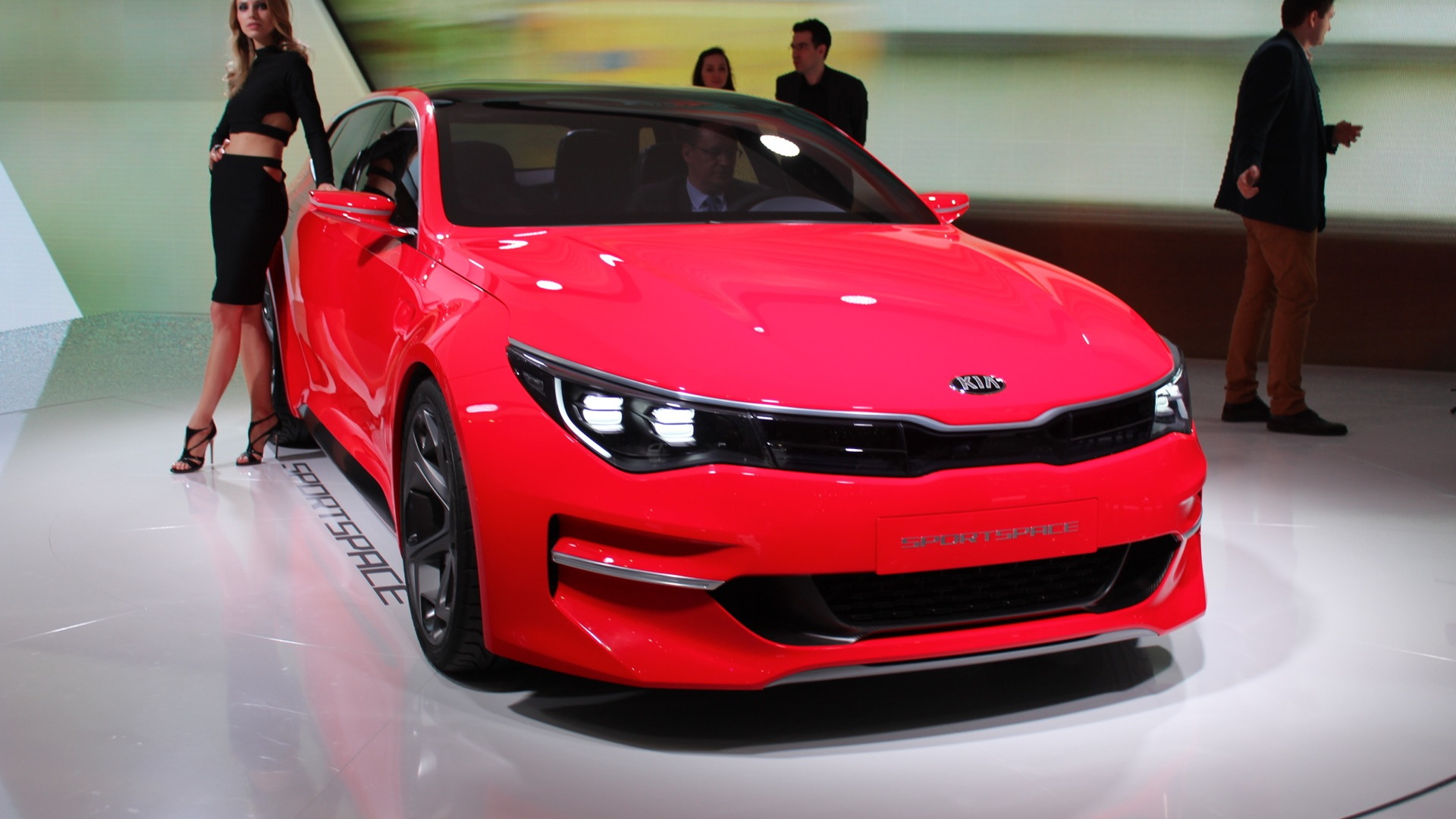 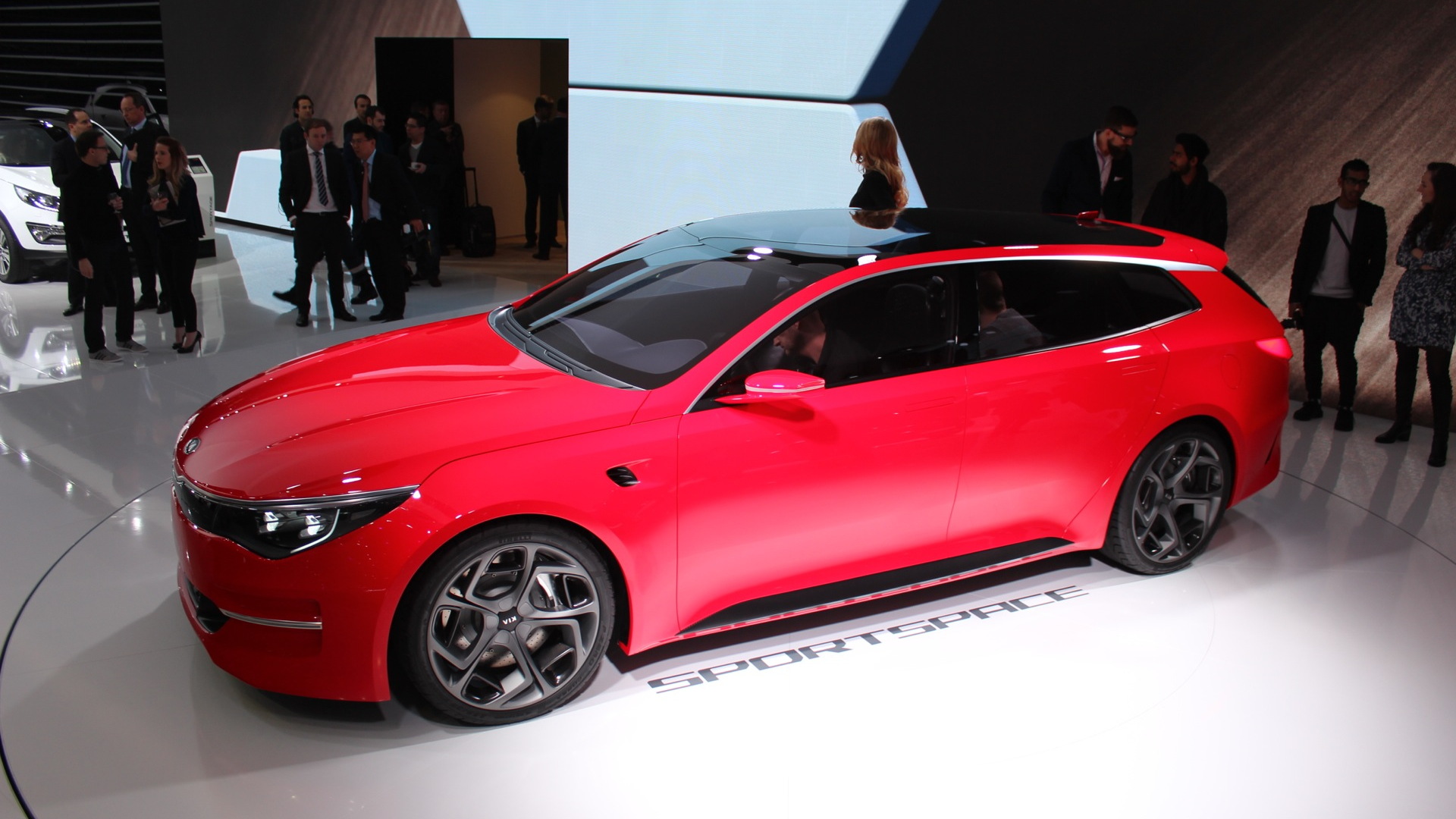 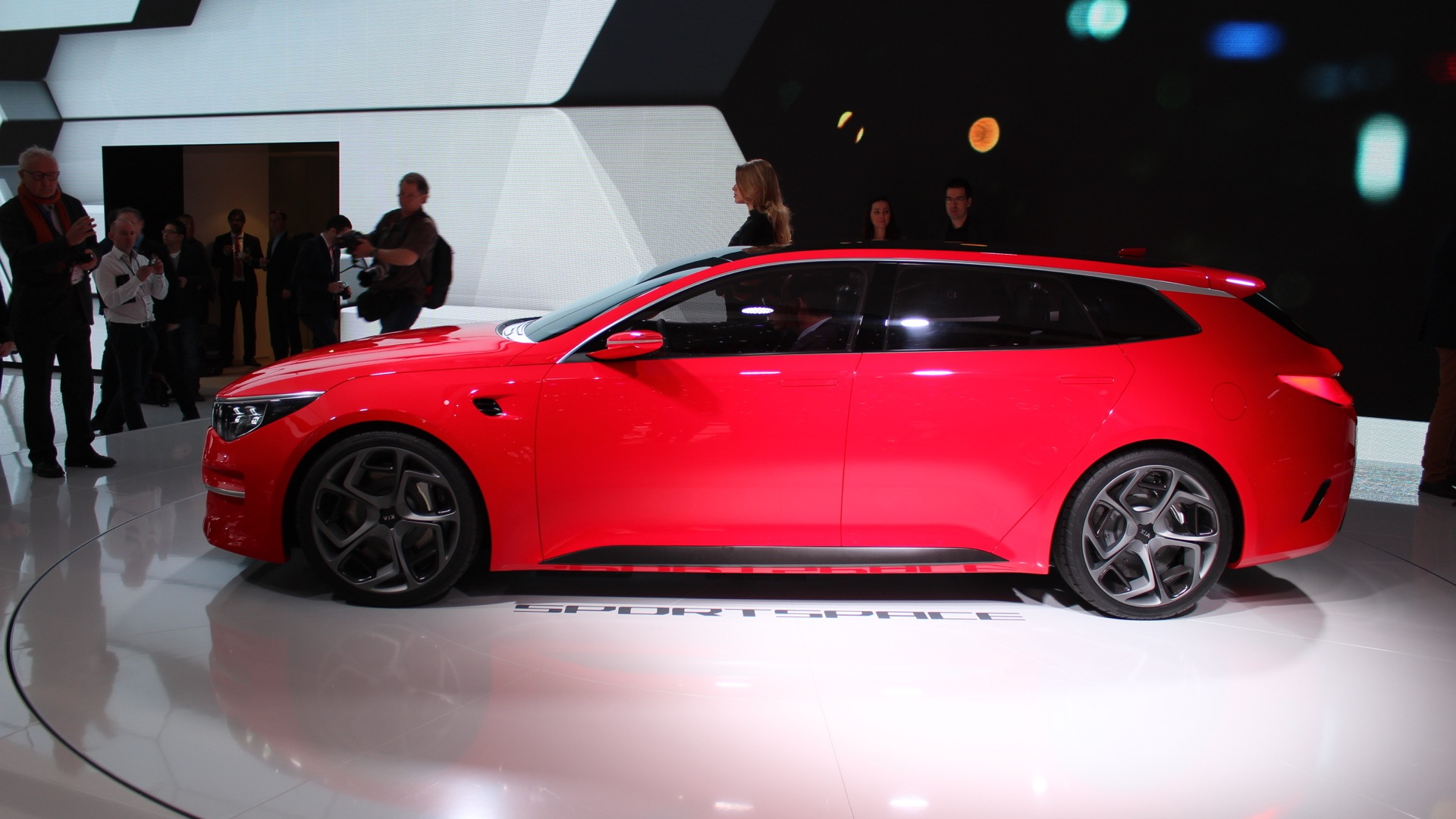 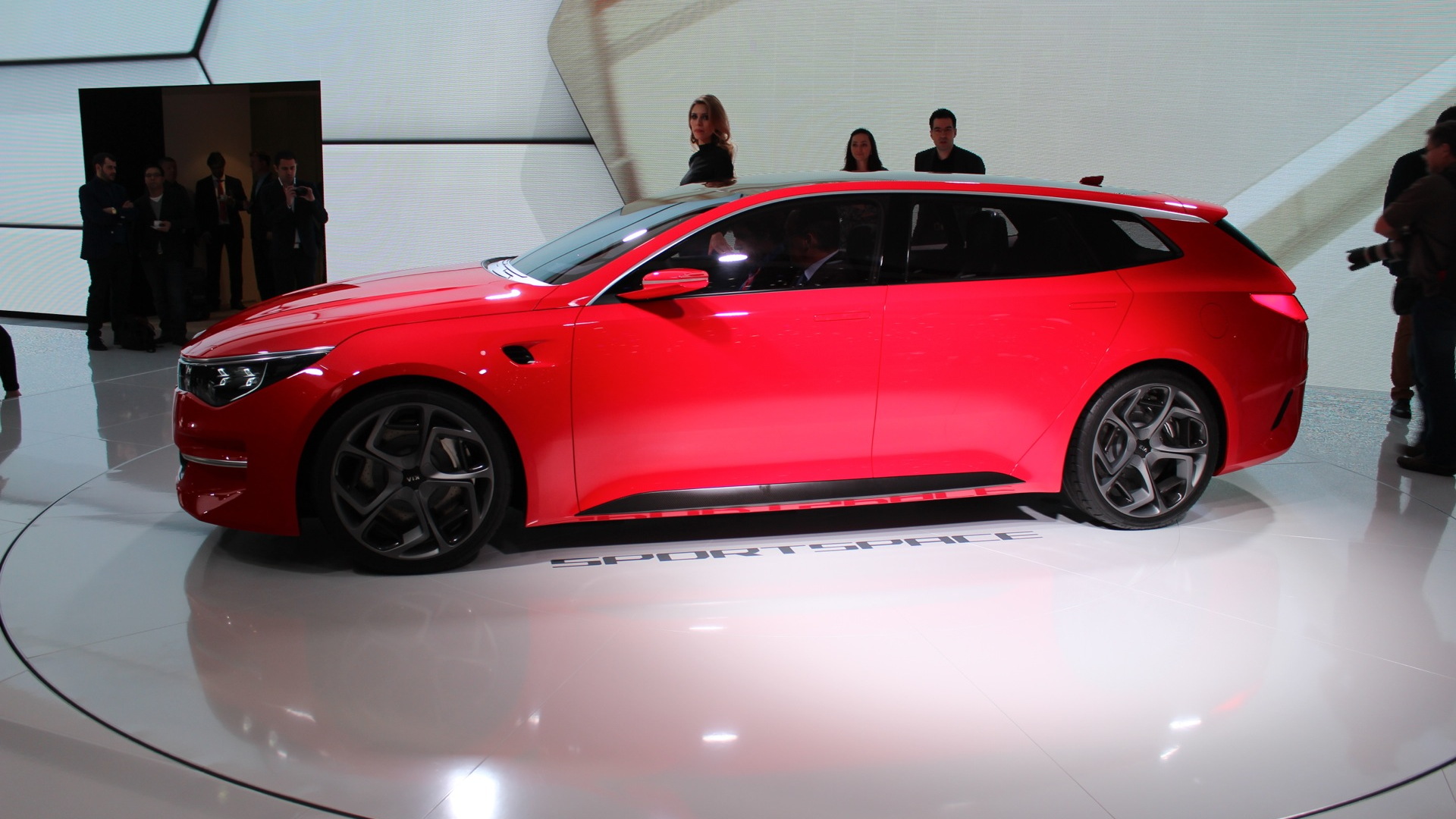 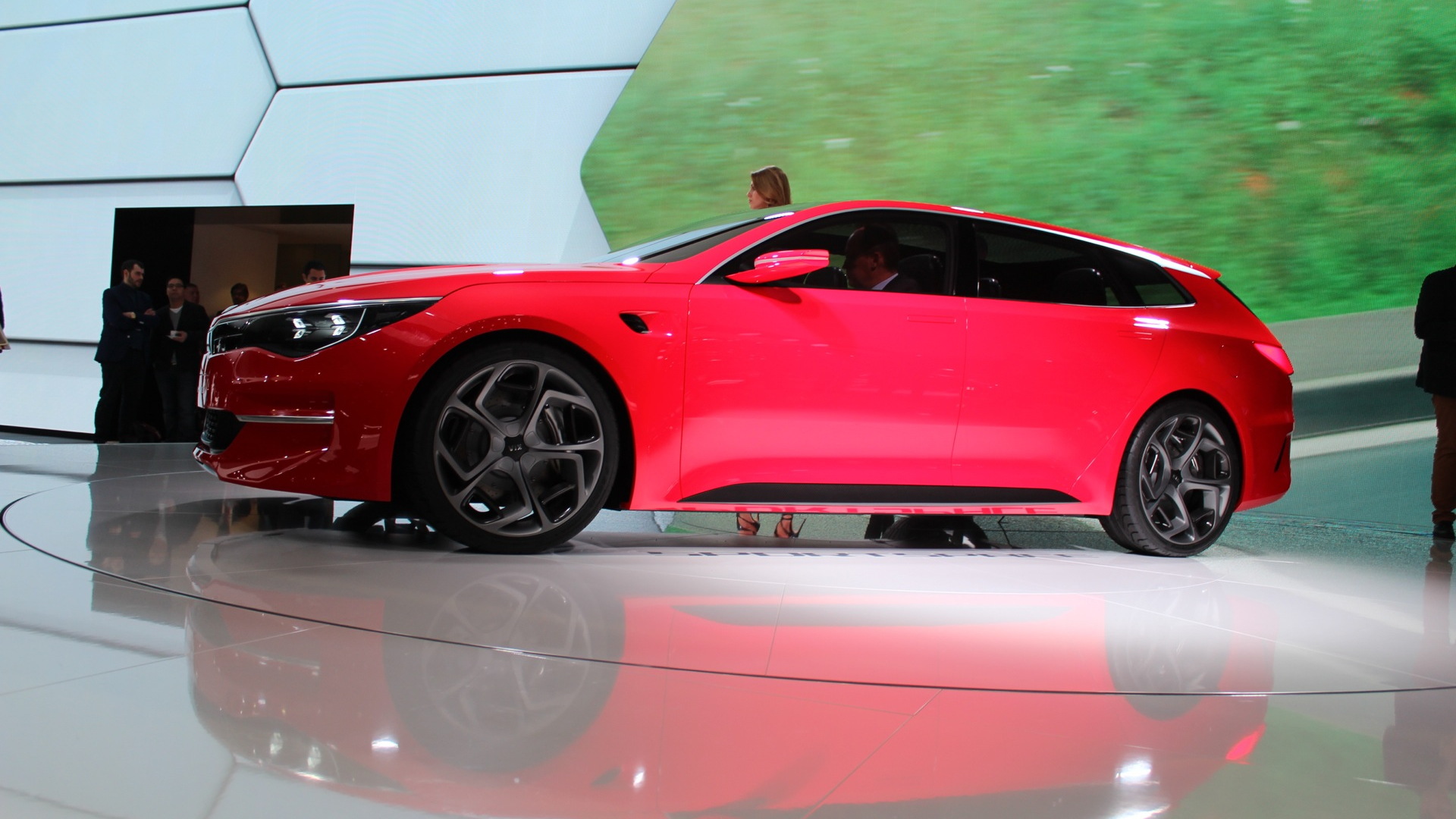 Kia’s current Optima was all-new for the 2011 model year so we’re about due for a replacement. That replacement will be introduced later this year as a 2016 model, but we’ve received our first official look at the car at this week’s 2015 Geneva Motor Show in the form of this thinly-veiled concept version, dubbed the "Sportspace".

The concept measures in at just under 16 feet in length (the wheelbase is 9.3 feet) and comes powered by a turbocharged and direct-injected 2.0-liter four-cylinder engine, rated at 246 horsepower. Drive is to the front wheels only, helping to maximize fuel economy.

The Sportspace’s long and lean profile with unbroken surfaces and purposeful lines is emphasized by a very forward-positioned D-pillar and almost hatchback-like rear arrangement. At the front, the vehicle wears an evolution of Kia’s signature ‘tiger-nose’ grille. The design is finished with unique 20-inch alloys that are inset with carbon fiber. That tasty paint scheme, by the way, is called “Ignition Red”.

The concept’s lines suggest only evolutionary styling for the new Optima, which will be the nameplate’s fourth generation. The car will once again be closely linked with the Sonata from sister brand Hyundai, meaning we’re likely to see the new Optima pick up most of the upgrades offered on the latest version of the Sonata—including hybrid and new plug-in hybrid powertrains based around a 2.0-liter four-cylinder engine.

Regular models will still be on offer and should stick with the current Optima’s naturally-aspirated 2.4-liter engine as well as its turbocharged 2.0-liter mill. A six-speed automatic transmission is expected across the range. Kia is also thought to be working on a diesel-electric hybrid powertrain for the new Optima but this is expected to be sold in Europe only.

Another option for the Optima we’re likely to miss out on here in the U.S. is a new wagon bodystyle, which the Sportspace directly previews. Kia says the concept has been created "as a spacious and versatile accessory to an active lifestyle, as a purposeful, energetic design study for the style-conscious, and as a sanctuary from the stresses of the modern world."

Inside, the Sportspace only features seating for four, with the center seat in the rear taken up by a center column that runs the length of the cabin. This center column connects up with the trunk where an innovative loading system comprising 28 rolling balls is set within the floor. In combination with the low tailgate, these allow the easy loading of heavy gear. When the vehicle’s ignition is switched on, each of the stainless steel balls lowers into its recess, ensuring the stored gear doesn’t slide when the car moves off.

Ahead of the driver is a highly configurable digital instrument cluster paired with a fully operational infotainment system. The large infotainment screen—which sits clearly within the driver’s view—can be operated in single or split-screen modes. Where the rear view mirror would usually be located, a slim screen replaces it, fed by images from the rear view camera. Other vital info for the driver is also fed into this screen.

While some of these feature are unlikely to make it to production, elements from the Sportspace we’re likely to see on the new Optima include its touchscreen display, panoramic sunroof and leather trim.

To see what else is at this week’s Geneva Motor Show, simply visit our dedicated hub.