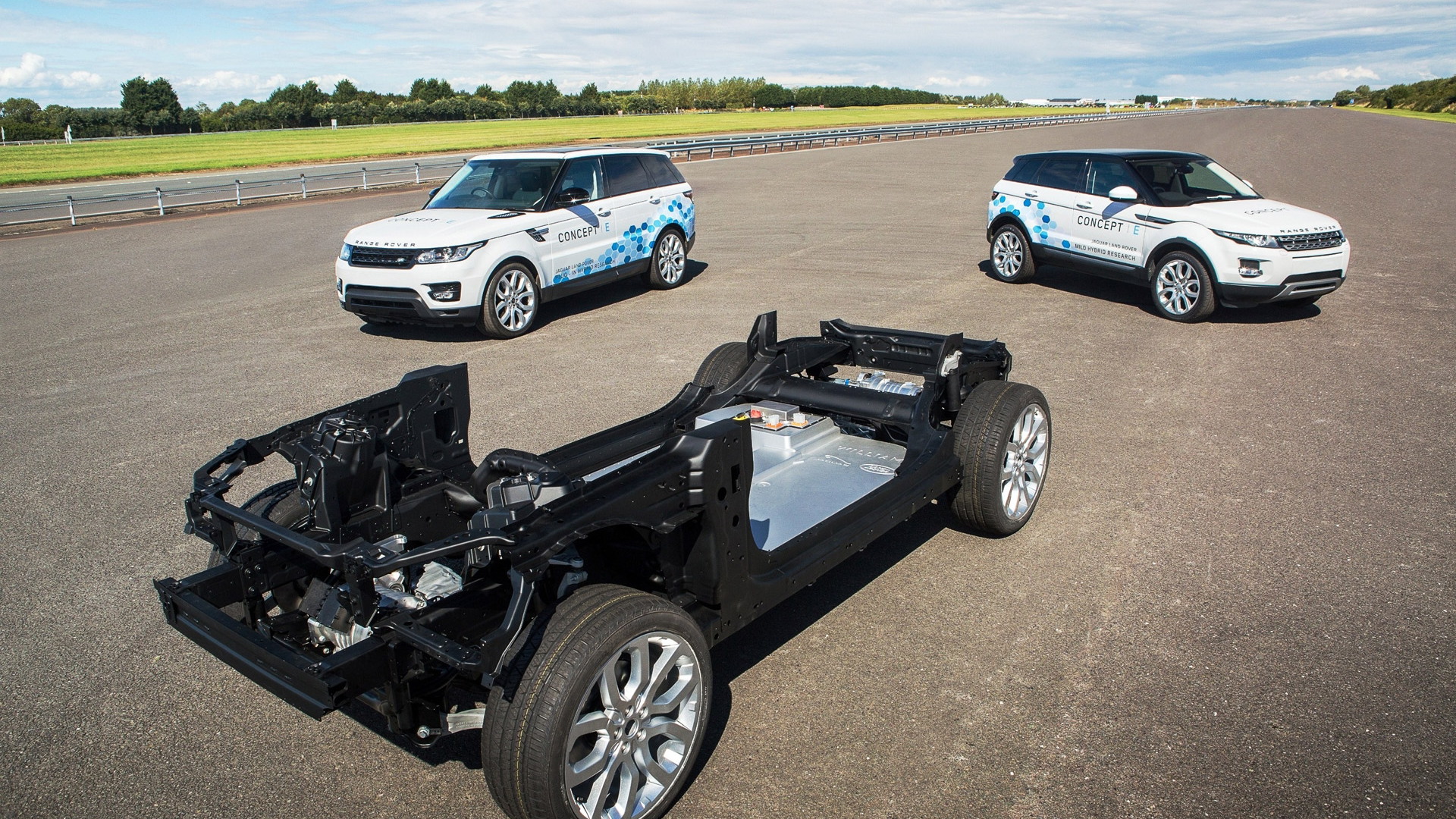 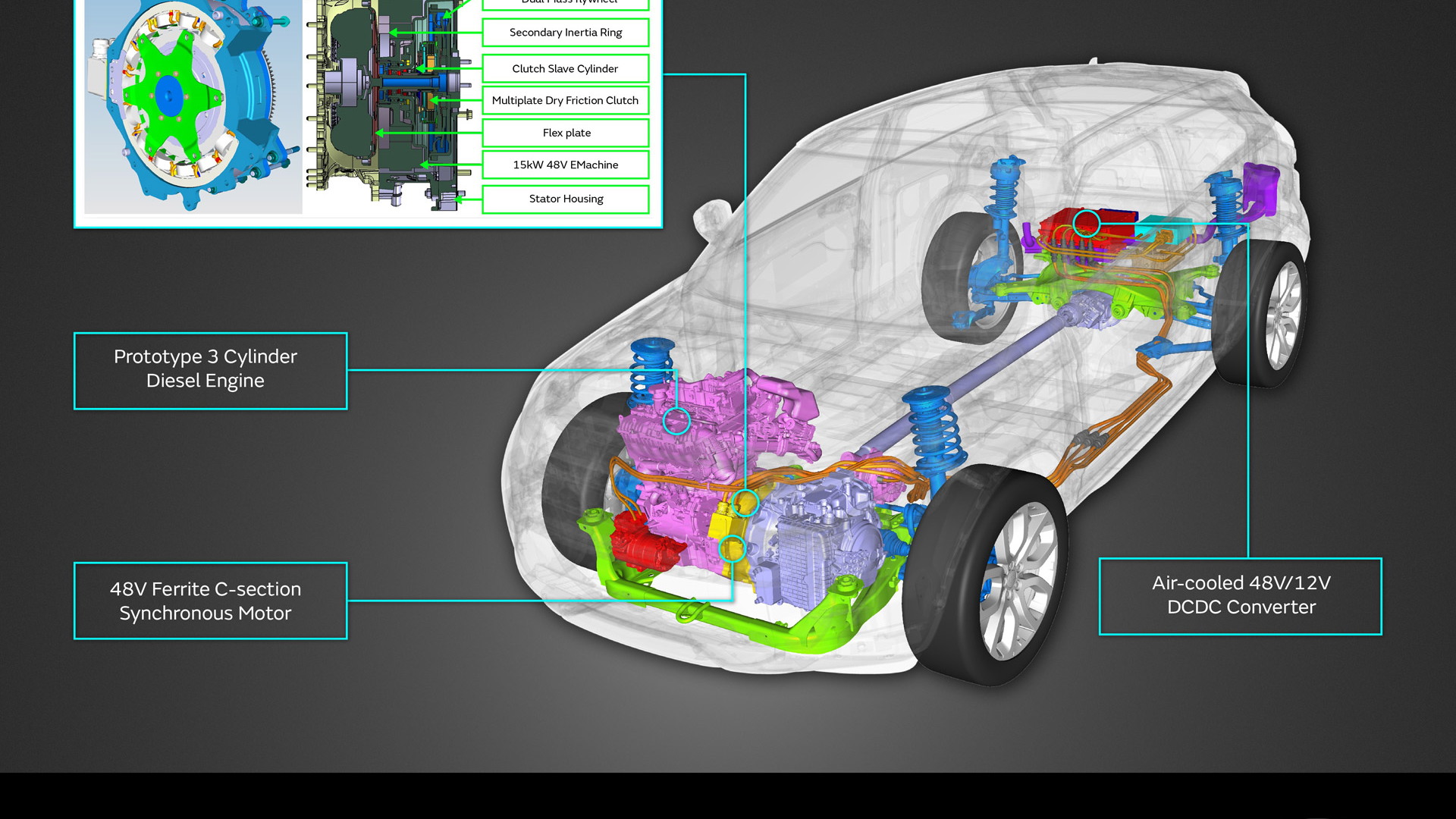 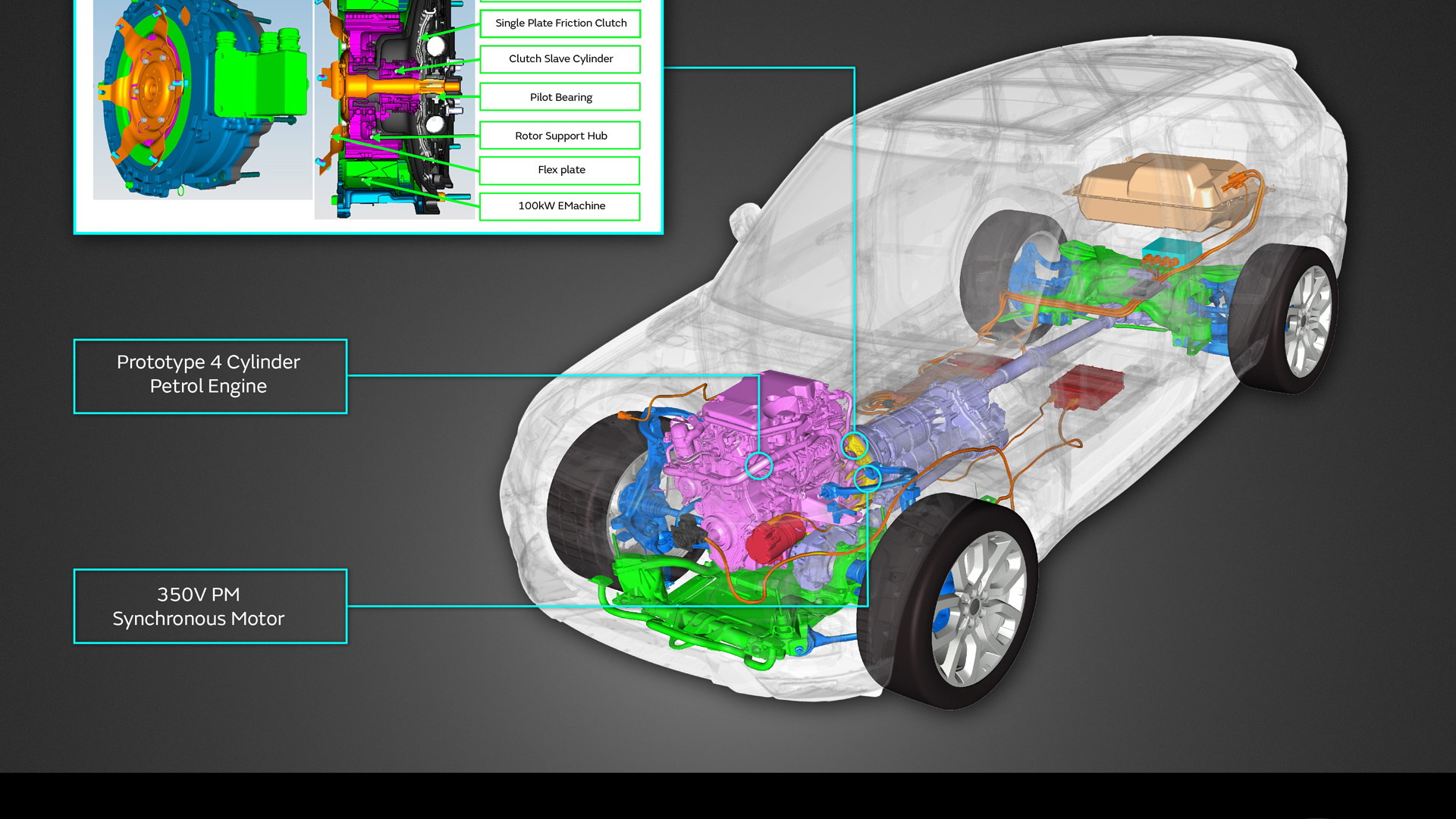 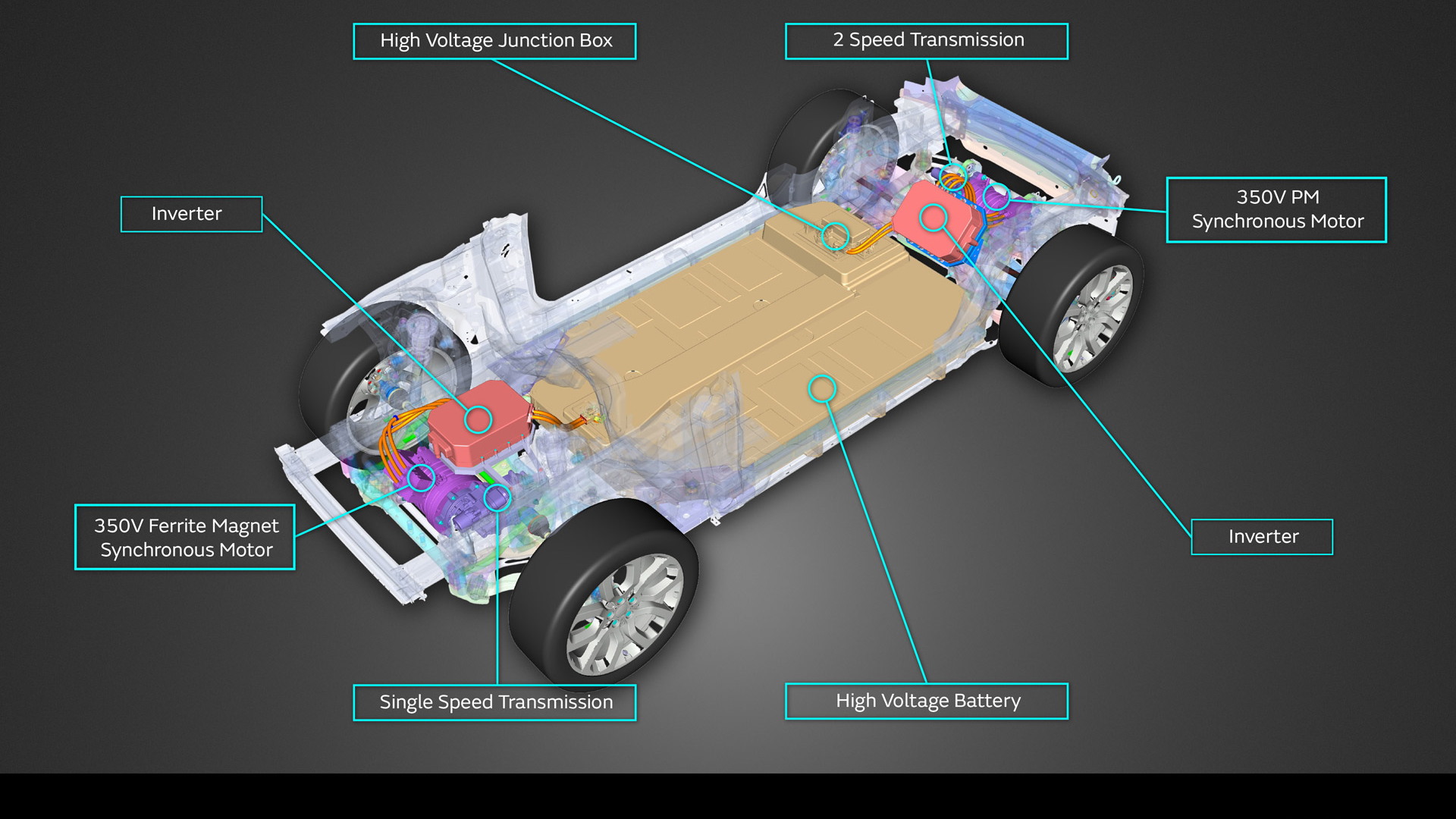 Jaguar Land Rover is fully embracing the concept of vehicle electrification and has already developed a series of technology demonstrators that will be used to test various systems that one day could be offered to customers. The vehicles are all described as concepts, though they hint at powertrains Jaguar Land Rover may launch in the future.

You may recall that Jaguar Land Rover’s Range_e Hybrid concept from 2010 eventually led to hybrid versions of the Range Rover and Range Rover Sport SUVs. The latest concepts, though, are much more advanced. They consist of a mild hybrid, a plug-in hybrid and an all-electric vehicle.

Concept_e MHEV: This is the mild hybrid and like most mild hybrids it uses an electric motor generator to convert wasted brake energy into electricity that can be stored and later used to power ancillary features such as the starter motor, air conditioner or other electric systems. The Concept_e MHEV technology is being demonstrated in a Range Rover Evoque and consists of a hybrid module sandwiched between the transmission and the internal combustion engine, in this case a downsized diesel unit.

Concept_e PHEV: The plug-in hybrid concept employs a similar setup to the mild hybrid but with a larger, more powerful gasoline engine and a larger, more powerful electric motor. This time the motor, which is still sandwiched between the engine and transmission, can drive the wheels, either by itself for short distances or together with the engine. The motor draws electrical energy from a lithium-ion battery stored in the trunk. The Concept_e PHEV technology has been fitted to a Range Rover Sport.

Concept_e BEV: The all-electric concept is the most radical and thus likely to be the furthest away from reaching production. Designed to fit Jaguar Land Rover’s lightweight aluminum platform underpinning vehicles like the Range Rover, the Concept_e BEV consists of a 70-kilowatt-hour lithium-ion battery stored in the floor and an electric motor at each axle to create an all-wheel-drive system.

All three concepts feature a unique modular electric drive module developed in-house by Jaguar Land Rover. The module can be inserted between any engine and transmission to create hybrid or used alone in the case of an all-electric vehicle.

“This is a long-term Jaguar Land Rover research project exploring all aspects of future hybrid and battery electric vehicle technology,” Jaguar Land Rover R&D chief Wolfgang Epple said in a statement. “The three Concept_e vehicles will allow us to test and develop exciting new potential technologies that could form part of our low and zero emissions vision beyond 2020.”

Hit the next page to read about additional technologies Jaguar Land Rover is working on to improve the efficiency of its vehicles. 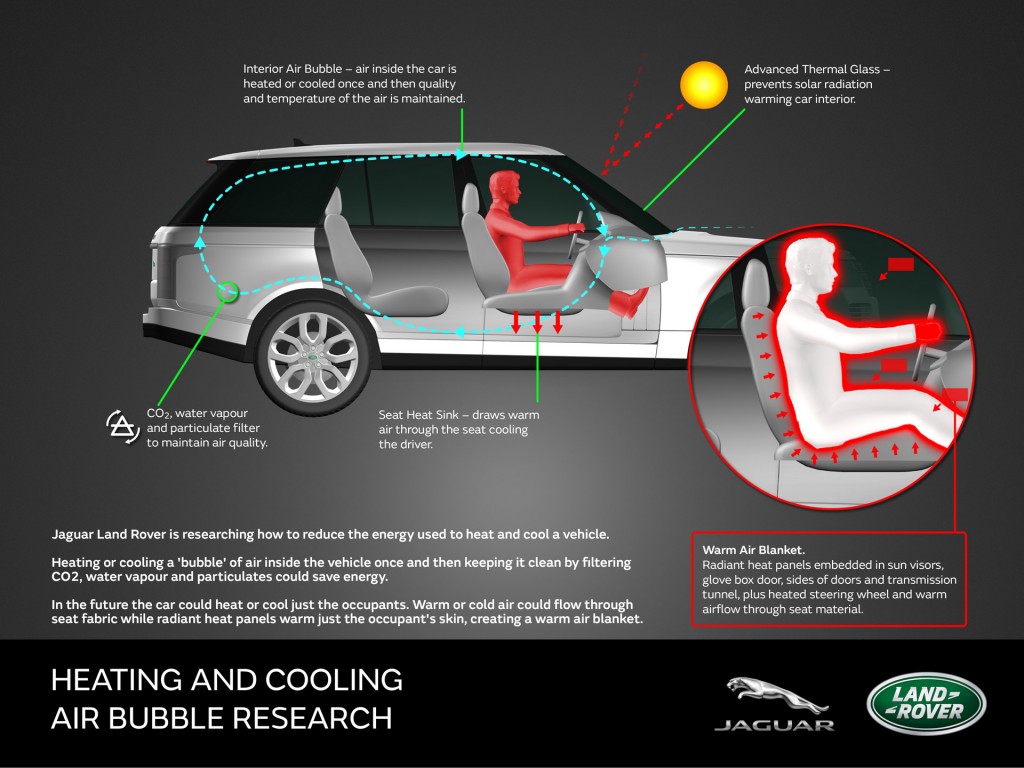 In addition to the new electrified concept cars, Jaguar Land Rover is showing some efficiency-boosting technologies that might be coming sooner to its cars. These include more efficient heating and ventilation systems and new solutions to reduce vehicle weight.

Some of the solutions include heating the air and then just recirculating it, with special filters being employed to remove CO2, moisture and particulates. Another option could be installing small, infra-red panels around the passenger areas. Because the panels heat up quickly and efficiently, and because the sensation of feeling warm is almost immediate, energy consumption could be dramatically reduced.

Another method to improve efficiency is by reducing weight. Jaguar Land Rover already builds vehicles using lightweight aluminum, but components made from special polymers could reduce weight even further.  These polymers are formed by a process called thermoplastic composite stamping, and with the technology Jaguar Land Rover engineers have succeeded in developing a new type of seat structure that weighs 30 percent less than an equivalent steel-based seat structure.

The engineers are also looking at a carbon fiber-like material that relies on natural, sustainable materials such as flax and a cashew nut oil resin. Called Carbio, the new material brings the strength and lightweight benefit of carbon fiber together with the sustainability and lower cost of flax. While the manufacturing cost is similar to that of traditional carbon fiber, the material cost of mixing carbon fiber and flax is said to be one-third cheaper. Components made from Carbio are 28 percent lighter than aluminium and 55 percent lighter than steel.

Finally, the engineers are also investigating whether a vehicle’s copper-based wiring loom and electrical components could be replaced with tiny, wafer-thin printed electronic circuits. The technology could be deployed as a lightweight and space-saving alternative to traditional wiring for features including instruments, switches, sensing, lighting, heating and displays.

No word on when we might see any of these technologies in production.