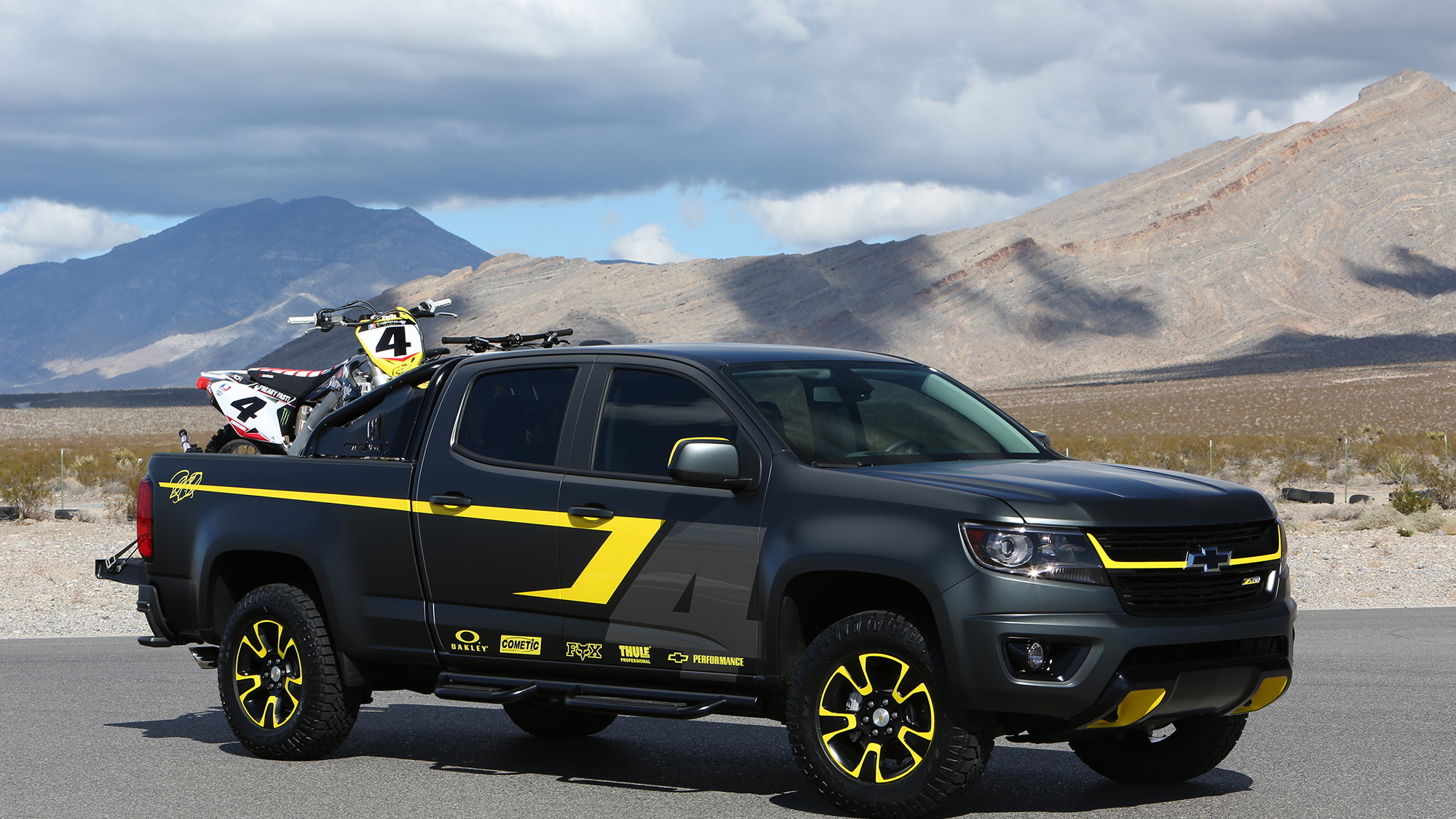 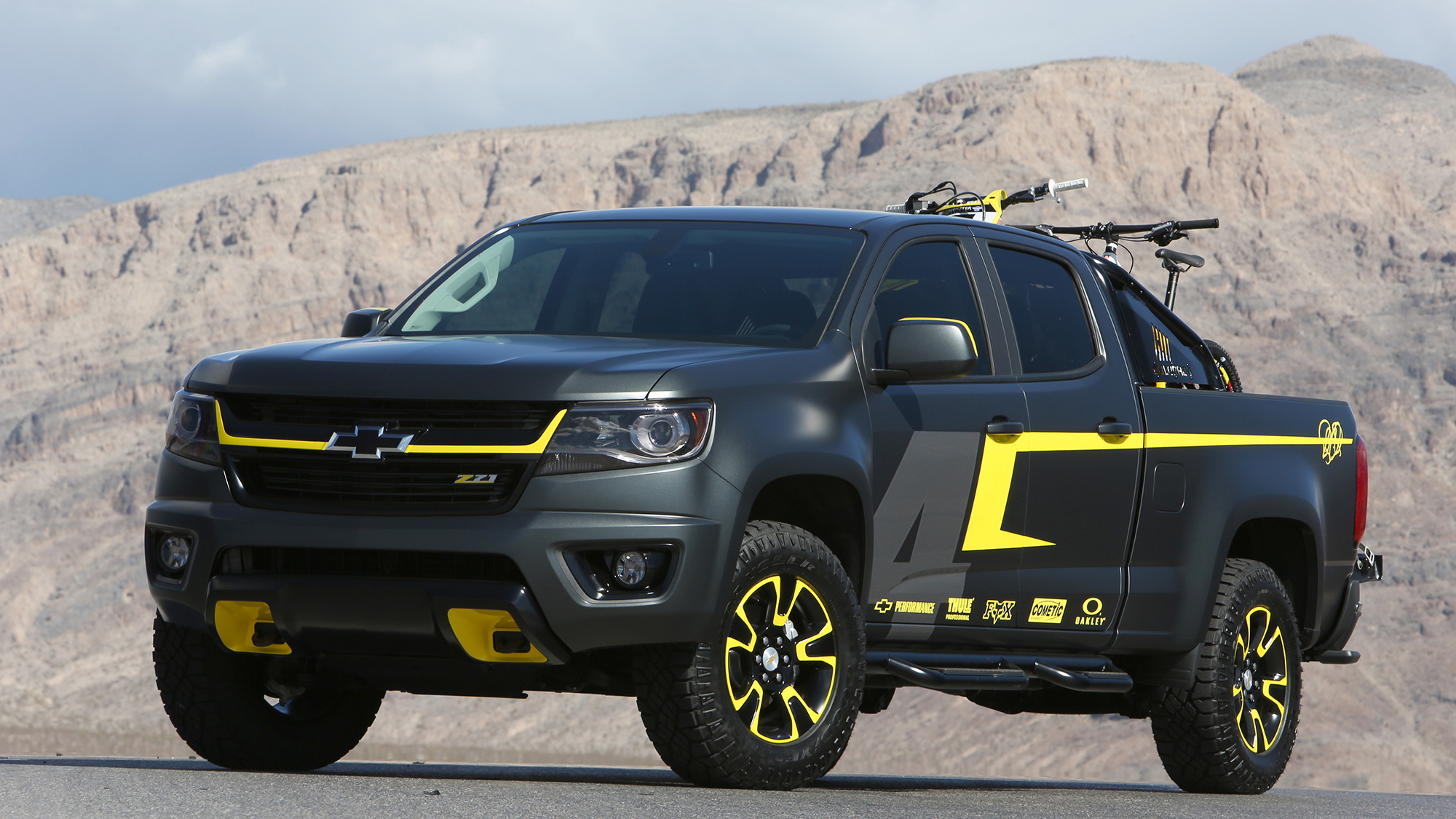 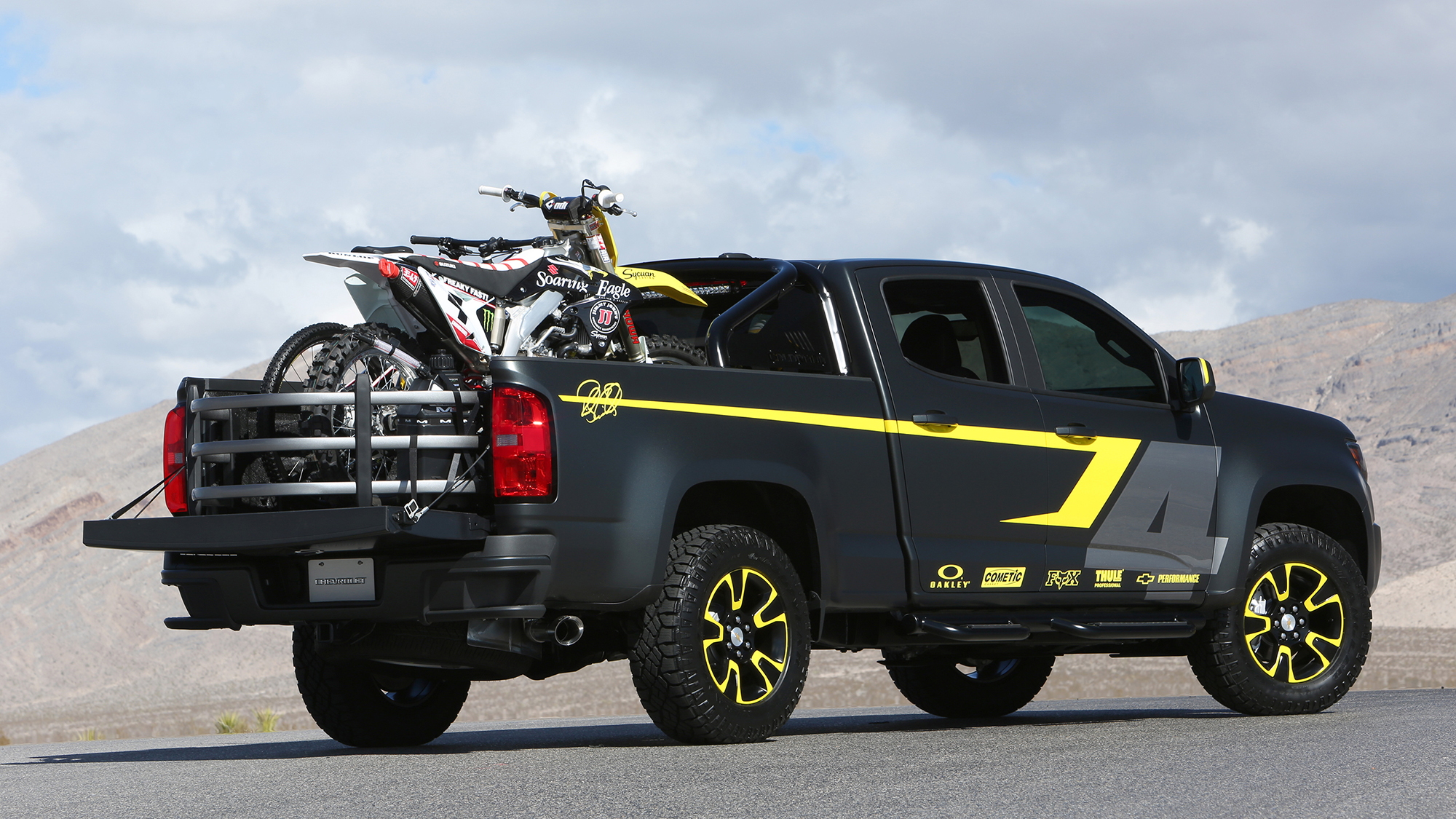 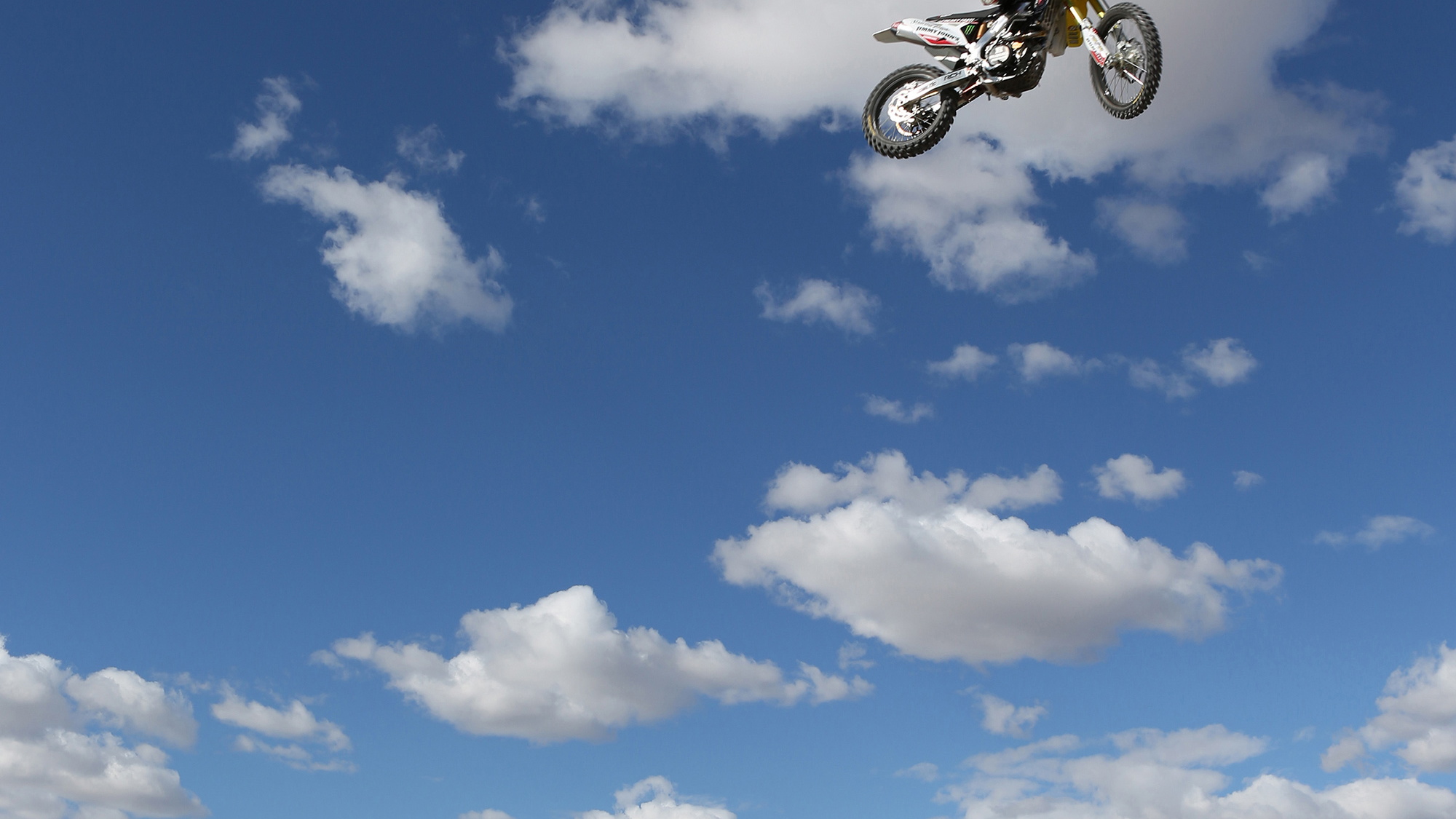 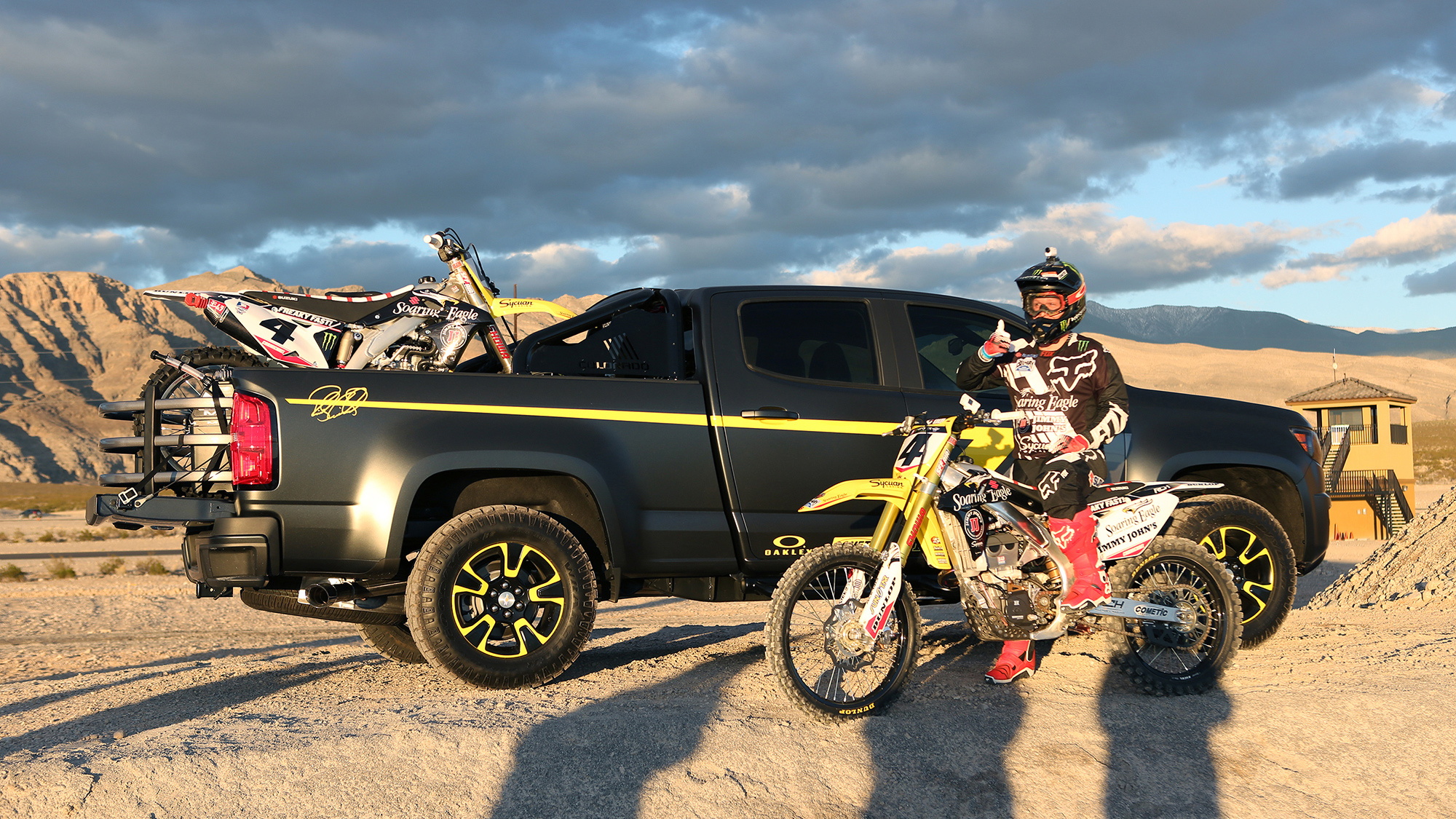 Chevrolet is eager to show off its new 2015 Colorado, and prove that it is capable of providing even more than just technology and stuff. The automaker heads to Las Vegas where it's bringing a pair of pickups, each packing unique graphics and options. One Colorado looks to the water, while the other looks towards the dirt... and the sky.

First up is the Chevy Colorado Performance Concept. This truck was created in conjunction with motocross superstar Ricky Carmichael. The two-wheeled legend wanted the capability of a full-size truck so he could haul tons of gear, but found a mid-size truck a bit more appealing. Thus his concept vehicle utilizes a 6'-2" bed and fits his dirtbike, a mountain bike, and the truck also holds any gear he needs to enjoy either machine.

This particular Colorado features the 3.6-liter V-6 engine under its matte-finished hood. That unit is good for 305 horsepower and nearly 270 pound-feet of torque, which should be more than enough to have the pickup remaining plenty zippy even when laden with all of Carmichael's toys.

CHECK OUT: Something Old, Something New For The Chevy Corvette At SEMA

For the boat lovers out there, the other Colorado offering could prove a bit more alluring. Chevrolet has teamed up with the Nautique Boat Company to craft a brand-new tow rig. With the aforementioned V-6, the 2015 Colorado is rated to tow up to 7,000 pounds. A 1,000-pound trailer and 4,200-pound Super Air Nautique 210 come in well under that limit. The 21-foot boat is prepped for ski and wakeboard duty, and the truck is set to haul the toys that go along with the boat.

We enjoy seeing functional concepts arrive at SEMA, and both of these 2015 Colorado examples are just that.