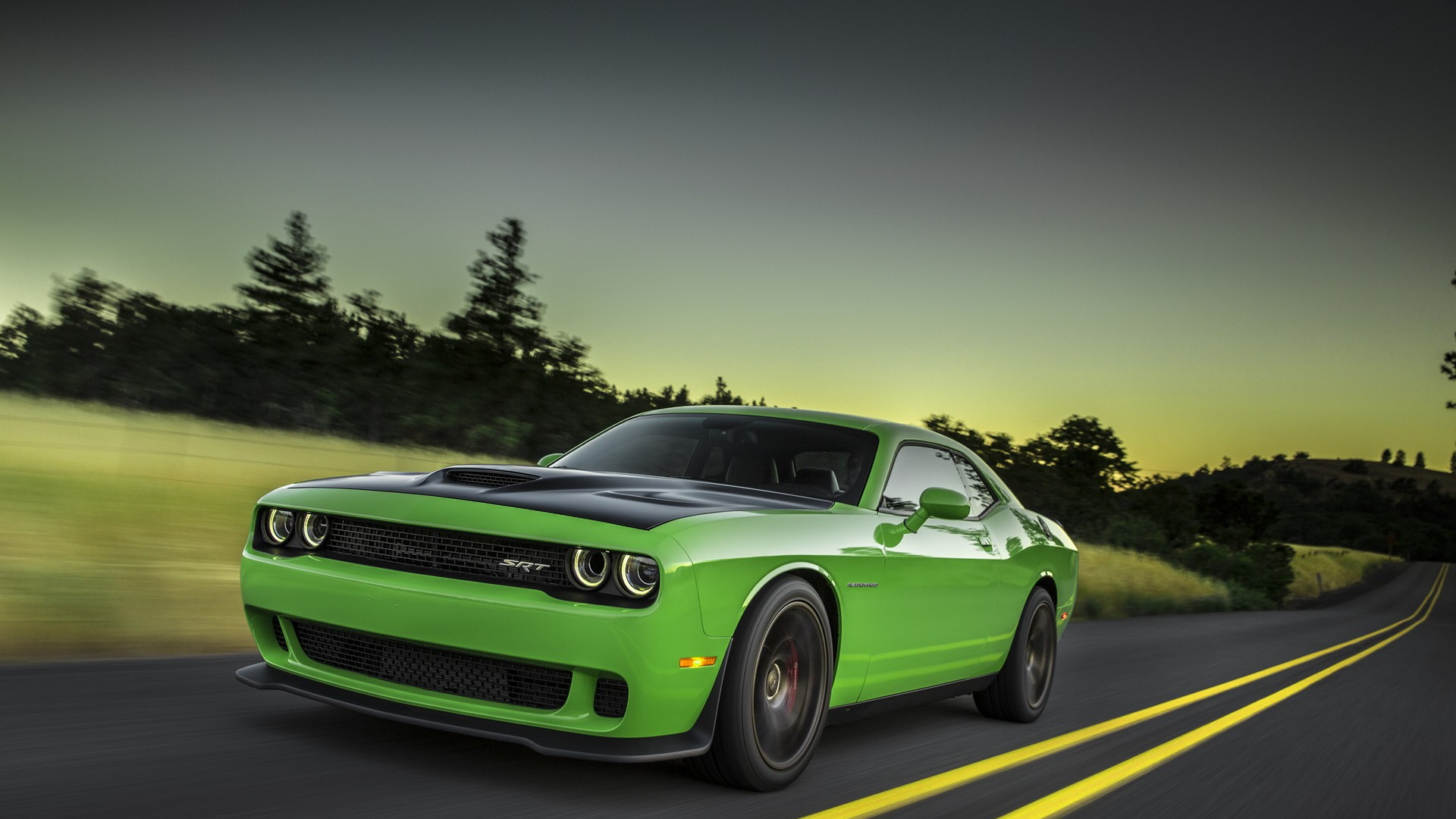 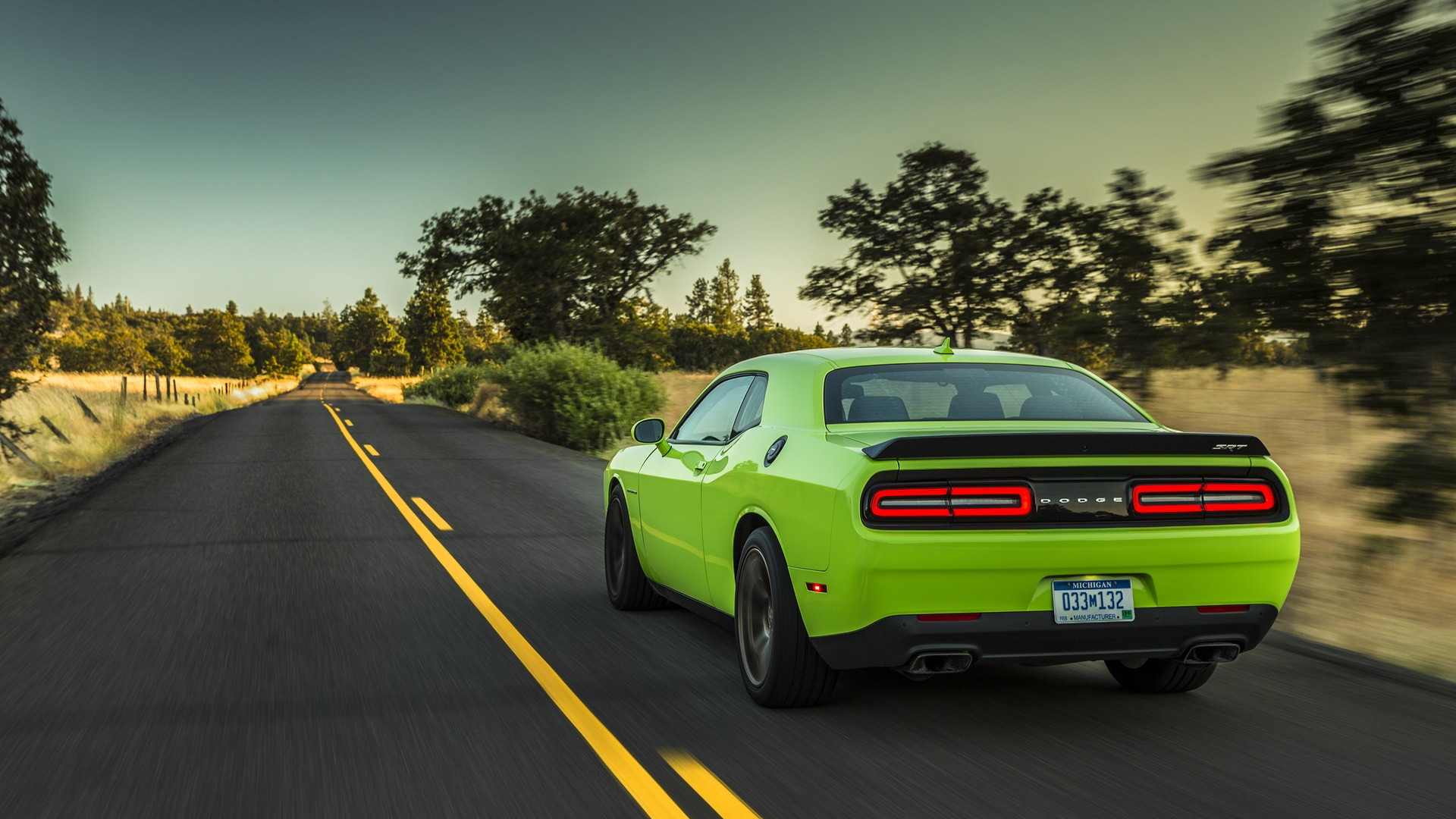 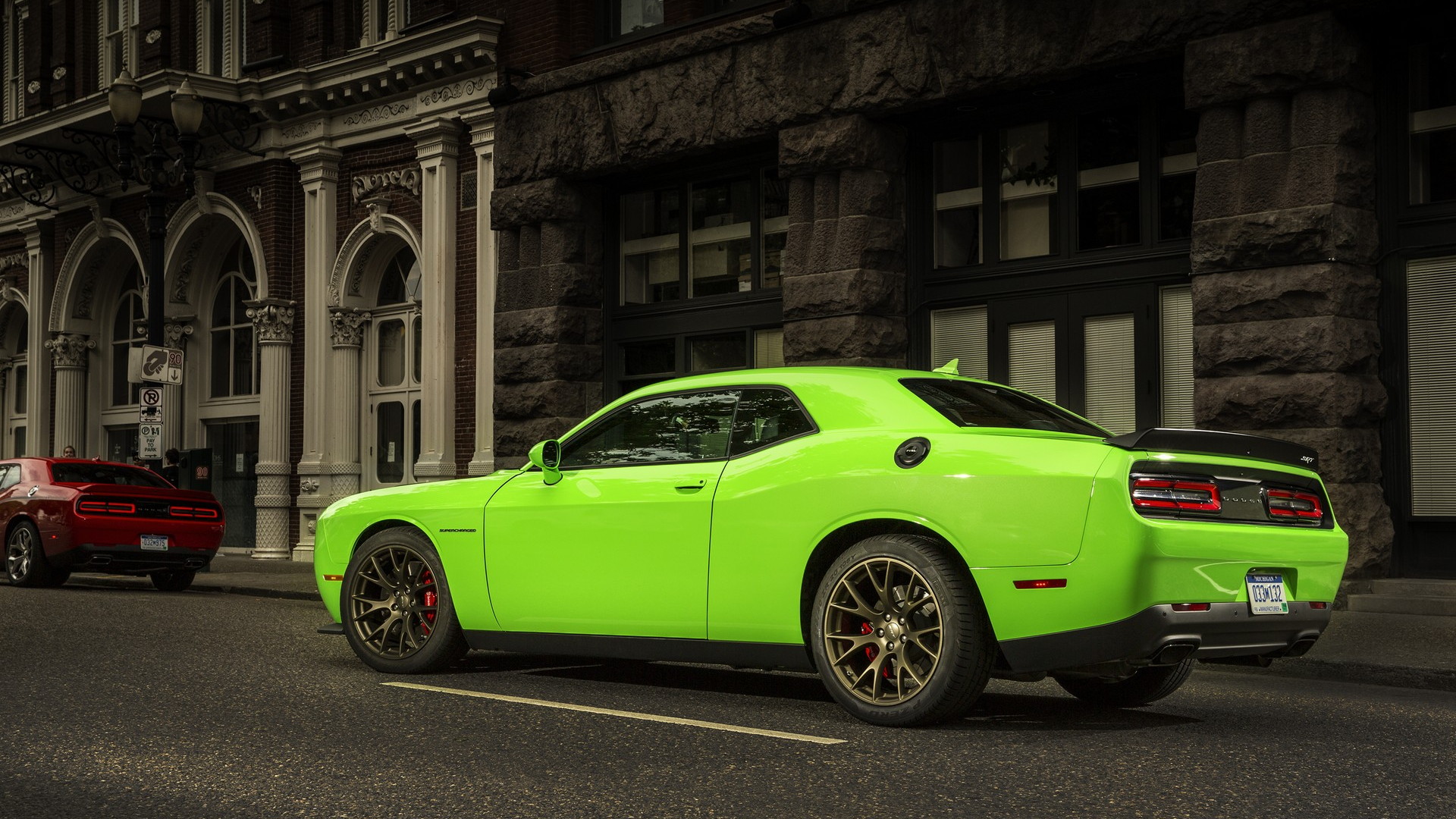 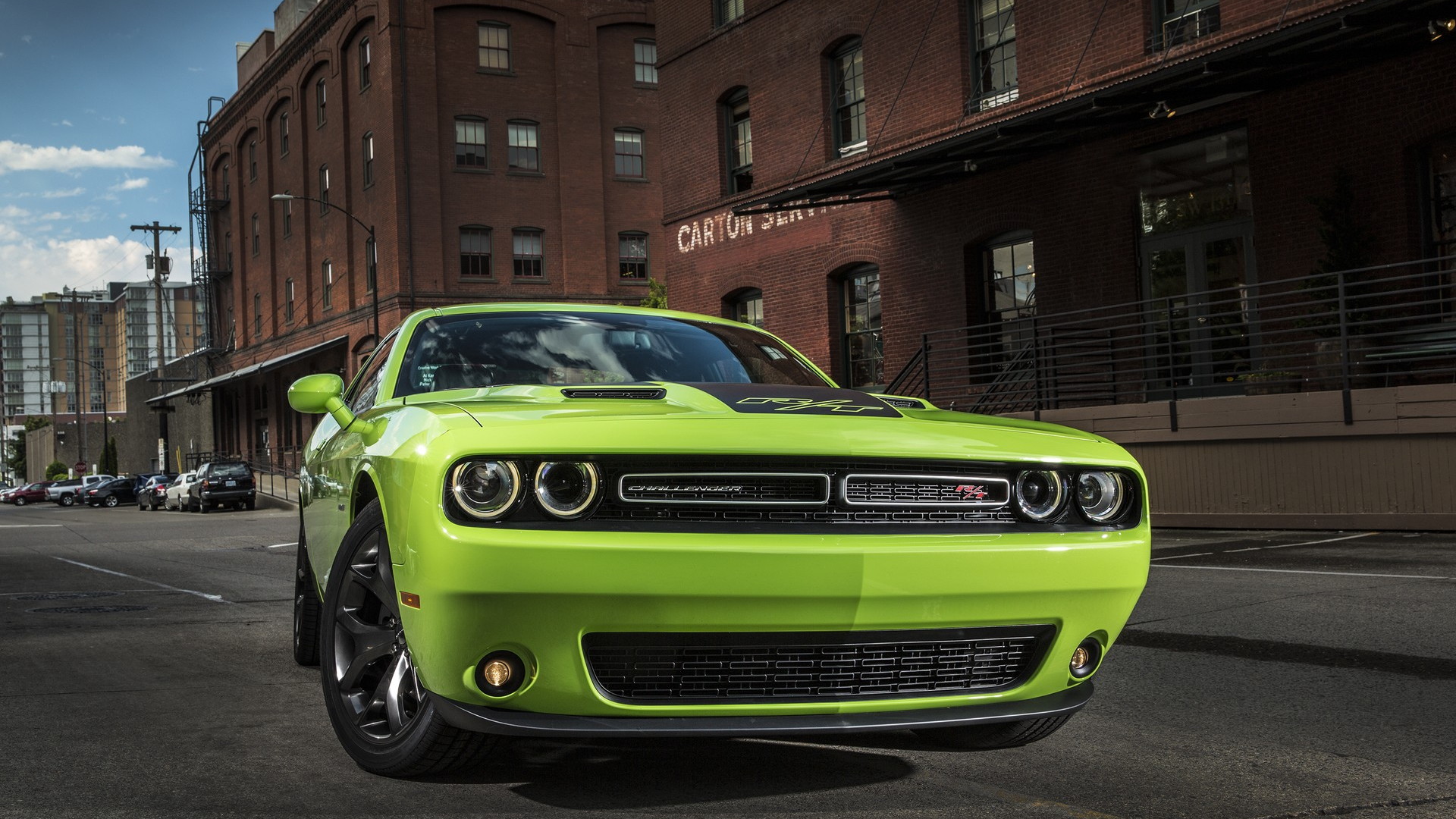 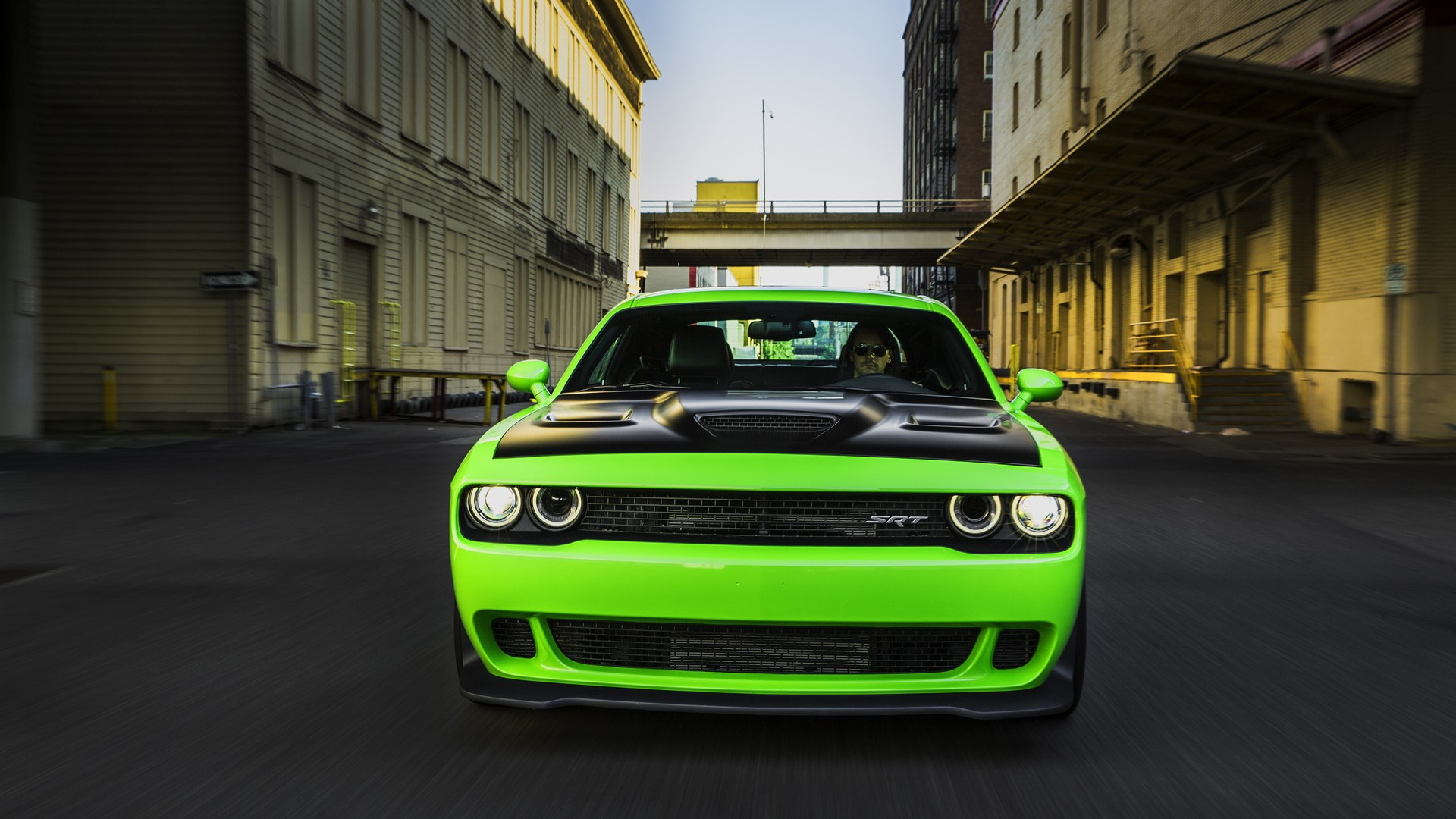 Muscle cars, like those of the 2015 Dodge Challenger lineup—and yes, that includes the 707-horsepower SRT Hellcat—have long been emblematic of all that’s American.

They’ve always been about cramming a V-8—a very large, lusty sounding V-8, preferably—under the hood of a car that typically isn’t all that large. Because we prefer super-sizes; and gas is cheap...or, well, it still is compared to much of the rest of the world.

Acceleration and quarter-mile times are all-important for bragging rights and those Friday night (drag-strip) lights. Top speed counts, but not so much. ‘Cause we can’t drive 55 but have speed traps everywhere, ya hear?

You gotta have enough practicality, too—in a back seat, a trunk, and a ride that’s good enough for the commute to the shop or the Friday night cruise to the drive-in.

And the ability to churn out way more wheel torque than the tires can handle? Yeah, that’s a must—glorious smoky burnouts and all. The length of time that you can extend a single burnout in the Hellcat is pretty much as long as your two rear tires will last. When a dragstrip launch demo degenerated into zaniness, we saw a single long run of billowing tire smoke result in tire tread well past the wear marks.

One by one, the 2015 Dodge Challenger lineup delivers on those muscle-car must-haves; and as we found out in a first drive of much of the revised Challenger lineup this past week in Portland, Oregon, it delivers performance that even those who typically like getting their driving kicks in more nuanced ways won’t help but be awestruck by.

The Hellcat—the most powerful muscle car ever—will run a quarter mile in 11.2 seconds, at 125 mph. That’s on the Pirelli P Zero Y-rated performance tires, which have loads of grip; or when fitted with full-on drag radials, the Hellcat will do a 10.8-second run at 126 mph. Power gets delivered through a six-speed manual gearbox; although as much as we love manuals, we think the heavy-duty eight-speed automatic might be a more stable companion when you have more than 700 horses in the stable.

ALSO SEE: Open Your Ears To Take In The EcoBoost-Powered 2015 Mustang

But numbers aside—and name aside—the Hellcat has to be more than hellaciously quick. In today’s market (unlike some muscle cars of the past) it has to be drivable—everyday drivable. And surprisingly, the Hellcat doesn’t feel like it’s a hair trigger away from disaster. You can drive it gently; you can drive it smoothly; you can resist that temptation. The Hellcat just putters along confidently, with shockingly great drivability. It’s absolutely nothing like the relentlessly brutal Viper.

We’d rate the SRT Hellcat’s drivability above either the Ford Mustang Shelby GT500 and the Chevrolet Camaro ZL1. It’s more at ease with itself on the power, near the limits or not, than the GT500, and it’s more comfortable than the ZL1—because while the ZL1 might have it beat for suspension sophistication, the ZL1 feels claustrophobic and crude next to the Hellcat’s superb interior, quiet cabin, and sprawl-out comfort. (Yes, taller folks, you have plenty of room for a helmet in the Hellcat.)

Those Pirelli four-season tires that come with the Hellcat—what the automaker left on for the track—felt great in high-performance driving, while remaining surprisingly quiet for cruising. They’re a little stickier when starting out than typical performance tires, and in hot laps of Portland International Raceway (PIR), they became noticeably more progressive with harder driving.

Of course, the SRT Hellcat’s boundaries are far and deep. And with Performance Pages readouts on things like lateral Gs, lap timers, and extended gauges—along with Drive Modes that allow Custom, Sport, Track, and Default (Normal) settings, as well as Street, Sport, and Track modes for the transmission—you can seriously dial in as much power (and aggression) as you want for the situation, with the adaptive damping system changing its game for each.

The Hellcat’s 707 hp beats all but a most exclusive group of Italian exotics. But with the SRT Hellcat weighing nearly 4,450 pounds, you won’t find the sort of eye-blurring thrust that you do on some of those supercars. It’s dramatic, for sure, with the crackling active exhaust and the battle for traction at the rear wheels, but this isn’t so much a car of absolute g-forces as it is—so we think—the most badass muscle car ever.

Looks and sounds exactly as it should, inside and out

In true muscle-car tradition, the 2015 Challenger lineup balances out the conservative, blocky silhouette with some finely drawn front and rear styling details as well as some outrageously bright colors like B5 Blue and SubLime.

And to top off the Hellcat, there’s a cat-back active exhaust that’s *almost* free-flowing. What you get is an engine that starts and idles with about the same (smooth, rumbly) character as the 6.4-liter, only it gains a truly hellacious cackle as you blip it up the rev range, and just a little bit of supercharger whine when you really press it in the low-to-mid revs.

R/T Scat Pack's the one to get

We actually spent the most time driving what we’d consider to be the most beast for the buck: That’s the Challenger R/T Scat Pack, a new package this year that brings a lot of the features of last year's SRT model, with the 6.4-liter 'Apache' Hemi engine now making 485 horsepower and 475 pound-feet of torque. Acceleration numbers to 60 mph roll in at the low four-second range; and it starts at $39,490—that’s about $3,000 less than last year’s SRT and more than $20k less than the Hellcat.

Although the supercharging and heavy breathing of the Hellcat, and all of its additional go-fast engineering, are things you can feel when we cracked the throttle wide open, the R/T Scat Pack felt pretty much just as strong in nearly any kind of on-the-road driving, where zaniness needed to be reeled in, in the interest of saving our license and keeping others safe.

As for the V-6, it carries over with the stronger, 305-hp version of the 3.6-liter Pentastar V-6 that was introduced last year. For the most part it feels (and is) just as strong as the V-8 versions of these cars were just a few years ago.

All along, the Challenger has always been a little more of a touring coupe than the other muscle cars or pony cars—and we feel like the interior changes of the 2015 lineup, collectively, take it further in that direction. In all, the standard 2015 Dodge Challenger SXT, SXT Plus, and R/T models feel almost like luxury coupes—refined, comfortable, and very finely detailed. They’re quiet, too, except for some engine noise when you want to hear it, which is when you’re accelerating hard in the V-6 and on all but gentle low-rev cruising in the V-8.

The entire Challenger lineup—all except the Hellcat—gets electric power steering for 2015. While we’re not as fond of the way it feels on center, and they seem to have tuned all forms of feedback and kickback from the system, it’s weighted nicely and most drivers should find it just fine.

V-6 models have the full look, but fuel-efficient, affordable practicality

Those V-6 and entry V-8 models offer a nice juxtaposition against the fury of the Scat Pack and SRT 392, and the sheer outrageousness of the Hellcat—and we can’t help but wonder why anyone would choose a Honda Accord V-6 Coupe over a Challenger SXT V-6.

As for those upper-performance models, they definitely make some sacrifices in the name of better body control under power, but it amounts to a little more road noise and a somewhat more jittery ride. The engine note is ever-present in those cars as well; but who doesn’t want that?

Of course, a taste of the performance in the Hellcat, and in the rest of the Challenger lineup, is just the start. These are well-balanced mid-size coupes that really do function well as daily drivers (for those not too far into the Snow Belt). With great cabin comfort, looks that are even more focused back on 1971 and '72, and an interior that also takes lots of retro cues but gets far classier and more cockpit-like, with soft-touch materials throughout—as well as updated infotainment and displays—the Challenger keeps up on all your modern connectivity and entertainment needs.

But really, with the Hellcat, the driving experience, the sound of the engine, and the accessibility, yet the potential to churn those tires at any instant: Well, that’s entertainment.