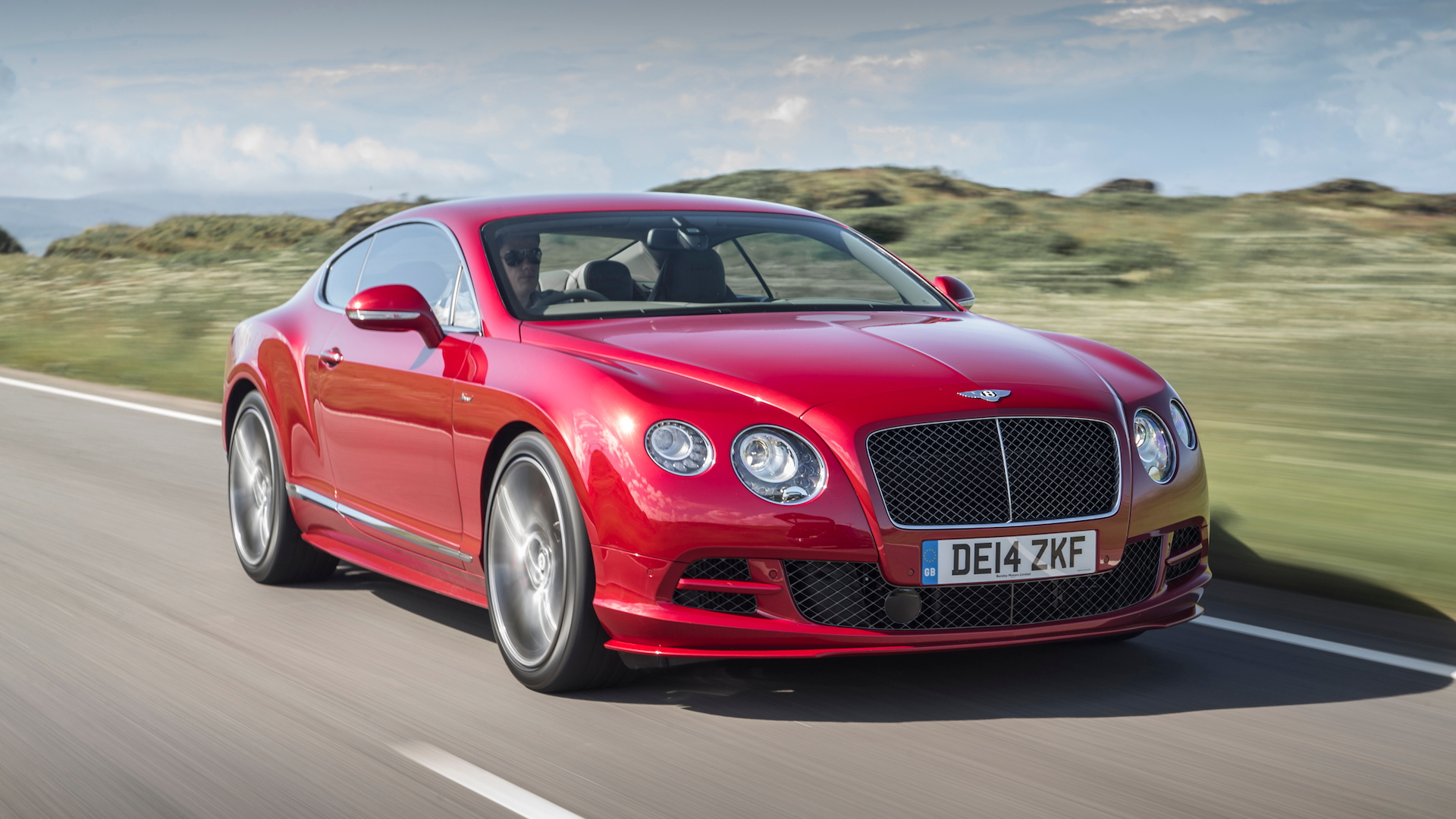 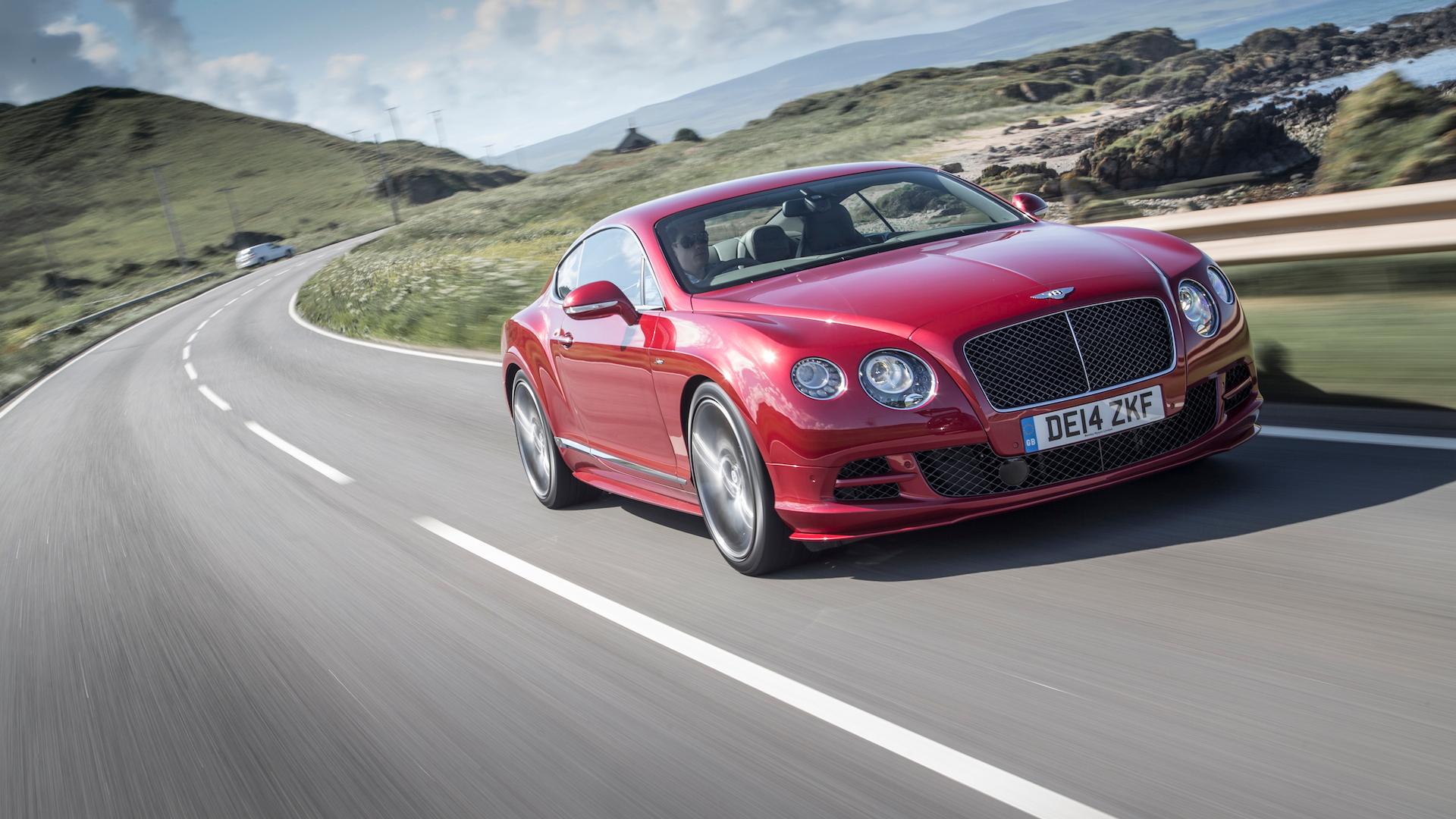 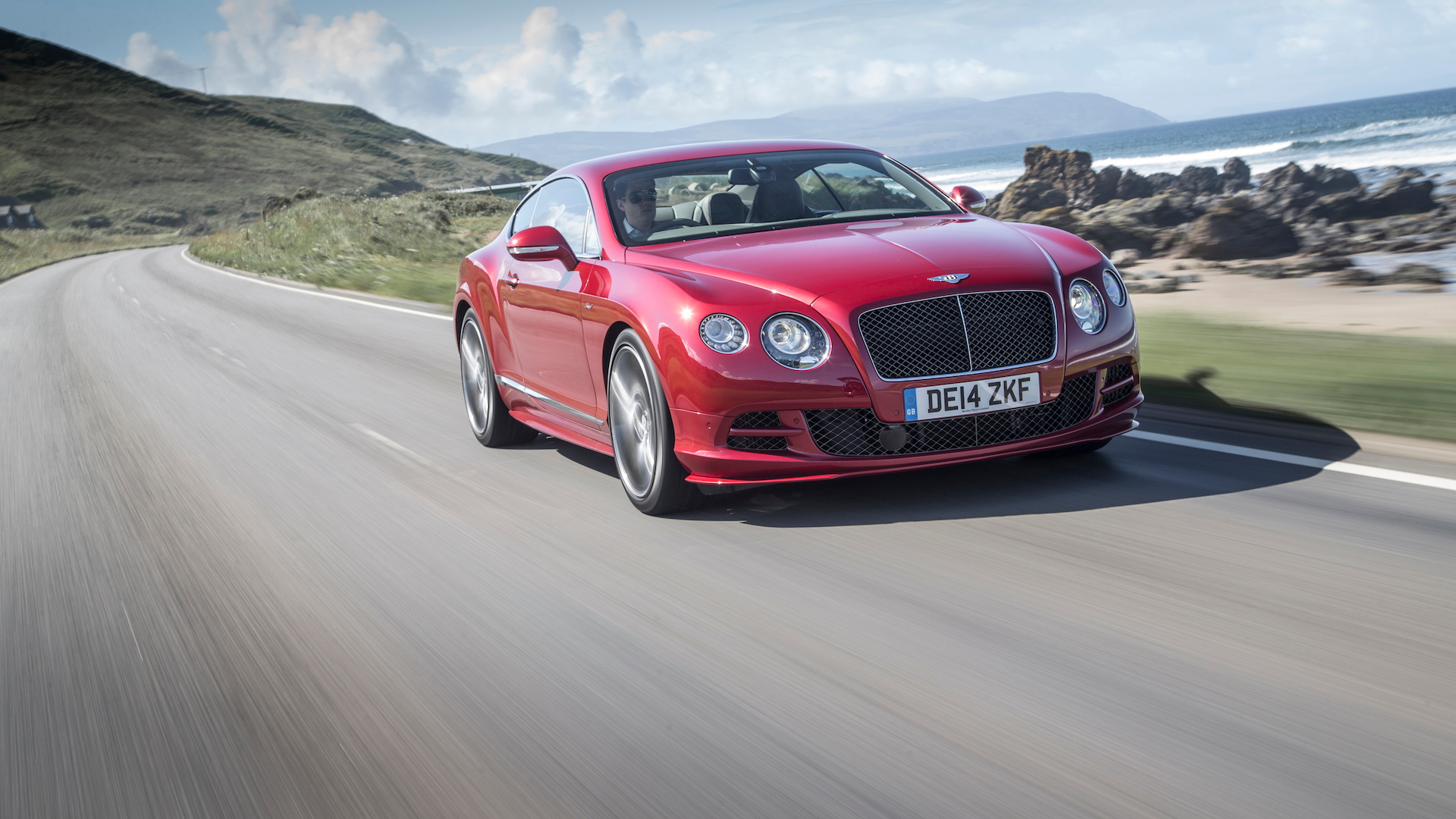 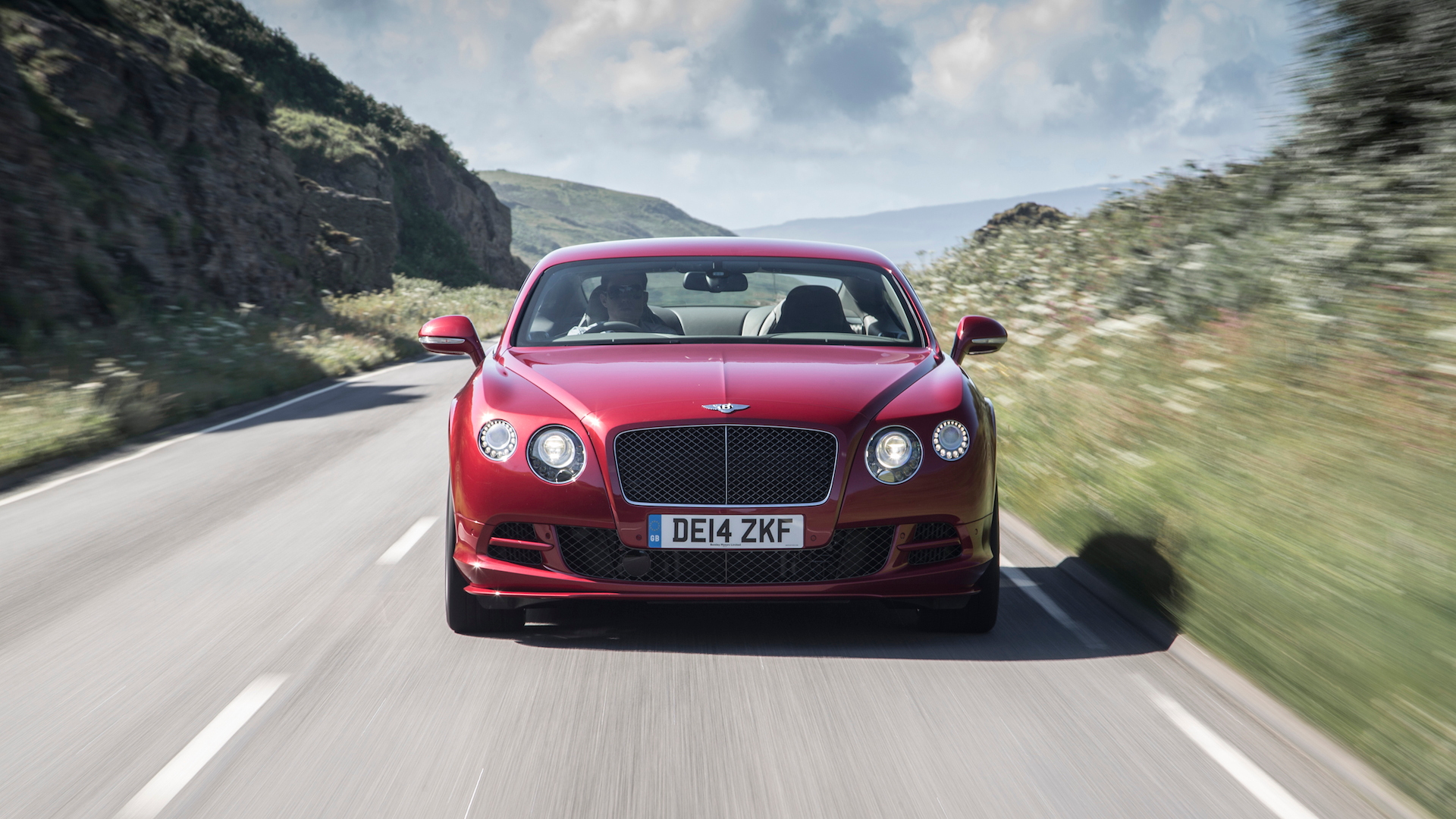 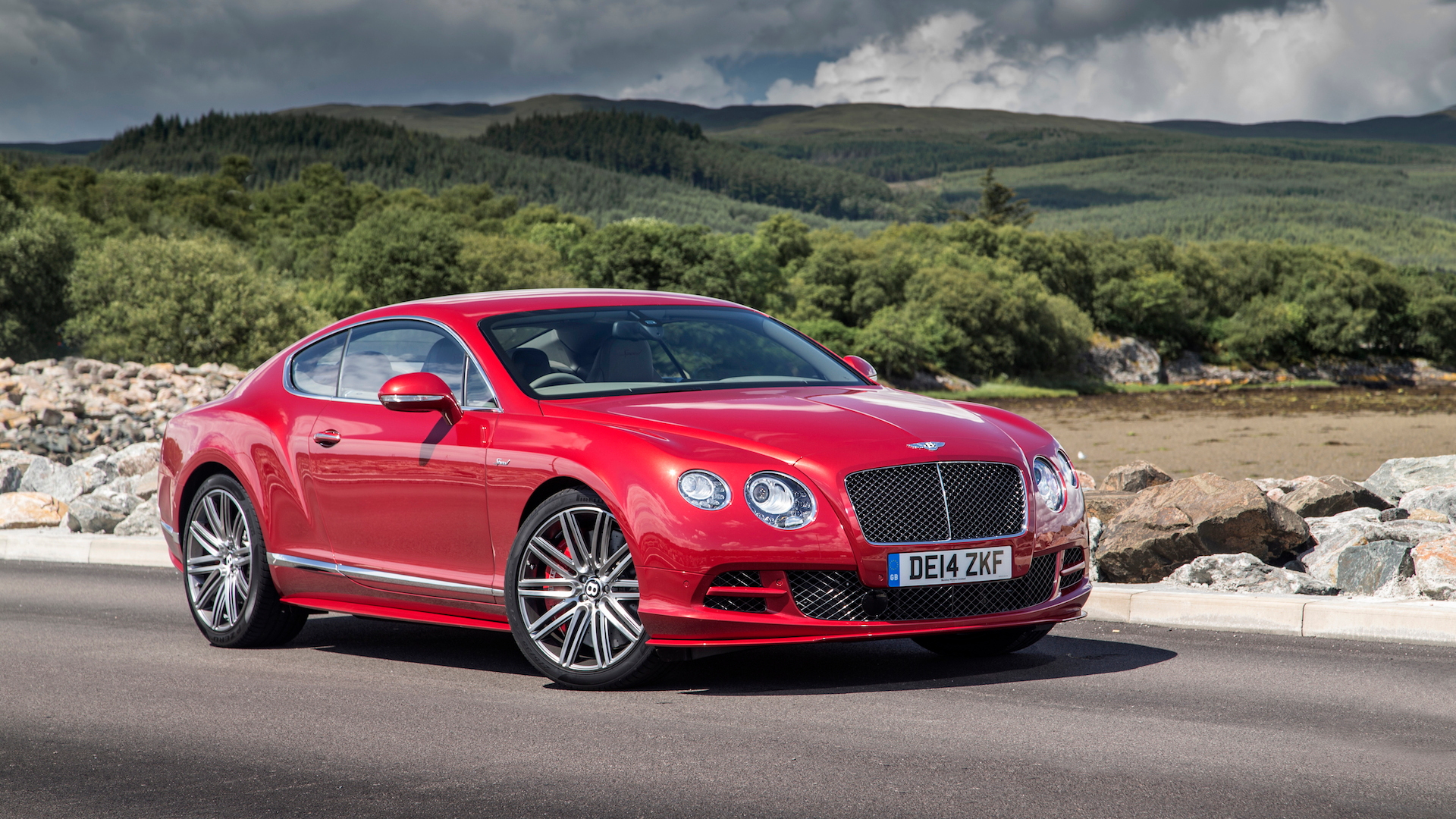 69
photos
Cruising at a cool mile of altitude over a carpet of lush green Scottish turf—Highlands to the left, Lowlands to the right—our seaplane bobbles over some ripples in the wake of Ben Lomond. In a few minutes, we top out at something like 165 miles per hour, not bad for an airborne mutt.

The 10-seat plane loses out by a good 40 mph to what we’ve just left on the ground. While we joggle through a spectacularly clear summer sky, the 2015 Bentley Continental GT Speed still is lashing at the 1.7-mile runway at Campbelton Airport, run after run, reeling off easy pulls to 180-mph plus, limited in this case only by the lack of an even longer runway.

Keep in mind, this was a place where the Space Shuttle was authorized to ditch, should it need to after a Cape Canaveral launch. The coupe simply screws itself down progressively, pulling down on its air dampers, hunkering down for aerodynamic gain, looking back at the lower 179 mph on its speedometer before drama-free carbon-ceramic brakes shrug off the speed with a bear hug of friction.

Campbelton was an RAF base, and it’s steeped in world-war history, but the weapons on display these days are a fleet of GT Speeds on a Highland fling of our own making--a northern trajectory set from Crewe through western Scotland to the shore of Loch Lomond, with lots of motorway and lane-and-a-halfers in between.

This year, the GT Speed earns the title of the fastest production Bentley ever built. It's an incremental gain to get that description. When the Continental GT was launched 12 years ago, the twin-turbocharged 6.0-liter W-12 engine put out 414 hp. Now it's good for 626 horsepower and a massive 607 pound-feet of torque, the latter ready to roll at 1,700 rpm.

Ricocheting as a crew around Kia Souls and timber trucks alike, the Speeds reminded literally thousands of roadside sheep why the Bentley W-12 doesn’t sound like anything else. Essentially two VR6 six-cylinders joined at the crank, the W-12 somehow mathematically figures out a supreme balance, and churns out a whuffling exhaust that’s not as rumbly as a V-8. It's almost sedate, until you throw the tach needle skyward, until it harnesses a metallic shriek that should have its own roadies and tour bus.

The Conti's still a shirt-ripping hulk when you want it to be, and more so in the GT Speed. Drop the throttle, throw off six-car passes on roads barely two lanes wide, it’s game. Flip the shift lever into Sport mode and the whuffle grows deeper and angrier, and the shifts come snappier. That paddle-shifted eight-speed automatic mates perfectly with the W-12, picking out the high points out of its power band.

The GT Speed still has the air-damper suspension and hydraulic steering, and with them it doesn’t so much sail over the road, as much as it rules it with an iron grip and linebacker stance. Compared with the standard Continental GT, the suspension’s set down 0.4 inches on springs stiffened by 45 percent. Bushings are up to 70 percent stiffer, there’s 15 percent more camber in the front tires, and the rear anti-roll bar is 53 percent thicker. The GT Speed hunts for huge curves and big bends—not so much the tight-fisted turns. It gladly trades off a youthful eager driving edge for a knowing, mature one that’s unflappable, even when you fiddle with the screen-based controls and vary the dampers from comfort to sport.

Gas mileage? Who’s checking? The Continental GT V-8 manages its fuel well, the W-12 doesn’t have to, but is game to try anyway. It's rated at 13/20 mpg or 15 mpg combined in the coupe, 12 mpg city in the convertible. There’s no cylinder deactivation here (it'd cause some wicked vibrations) and no start-stop or mild hybrid action, but plug-in hybrids are coming soon with the next-generation GT—plug-ins with about 30 miles of driving range, and enough battery capacity to smoothly start and restart the engine, or even let the car sail.

The GT Speed is one brute that knows how to dress for occasion. Its gains are marked with a new front bumper with mesh grilles covering the intakes, a composite splitter, and a small pair of winglets. A dark tint is applied to the light surrounds and wheels, and the brake calipers get a bright red finish. The Candy Red paint on this car? It's a 2015 Speed exclusive. In back and down below, the oval exhaust outlets are an inch and a half wider than those on the standard W-12 car, and 21-inch wheels with Pirelli P Zero tires are standard issue. Those carbon-ceramics that brought us back to the landosphere? They're a spendy $14,150 option.

It knows how to coddle, too. The GT Speed's cabin gets a color split all its own, with a dark interior theme dressed in a contrasting color applied to the doors, rear panels, fascia wings, inner console and  gear lever. As an option, the quilting on the door panels and seats can be stitched in the same contrasting color. A Speed badge on the dash is made from injection-molded stainless steel. The carpets are still woolly donations from Scotland's quiet majority.

Bodies and castings come from the Continent, but the GT Speed's interior is still handmade at Crewe. It's one of few car plants where Dutch elm could be a real veneer disease, where a solid copper wrench is used to avoid scarring engines during assembly, where bull hides are inspected for mosquito bite marks before they’re cut and sewn, where the embroidery on a single Bentley logo on a single headrest consists of five thousand, one hundred and three stitches.

The Continental GT Speed is more useful than it needs to be, what with a real back seat and all-weather all-wheel drive. It still has its foibles. It muddles through with the same infotainment system as other Bentleys. It just doesn’t have the finesse lavished over the rest of the cabin—and we’re not huge fans of the tune of the audio system, set up for lots of midrange but not the tight bass digitally recorded music prefers.

Then there’s the plush, thickly lined convertible top—it does a yeoman’s job blotting out road sounds when it’s up, but run up into a Scottish-grade rain squall (hard to imagine, but yes, it happens) and you have to slow down to 20 mph or stop and wait almost a half-minute before you’re protected. It’s simply a huge piece of canvas to fold and unfold.

The GT Speed is a bully on the road, stanced to inspire you to get the hell out of its way, in the most polite way possible. It’s positively a model of gentility in every other way—even when you’re urging it to supra-aeronautical speeds.

Priced from $227,600 for the coupe or $250,100—before destination and gas-guzzler taxes—the 2015 Bentley Continental GT Coupe and Speed go on sale in the third quarter of this year.

Buy your next Bentley Continental GT on DuPont Registry.