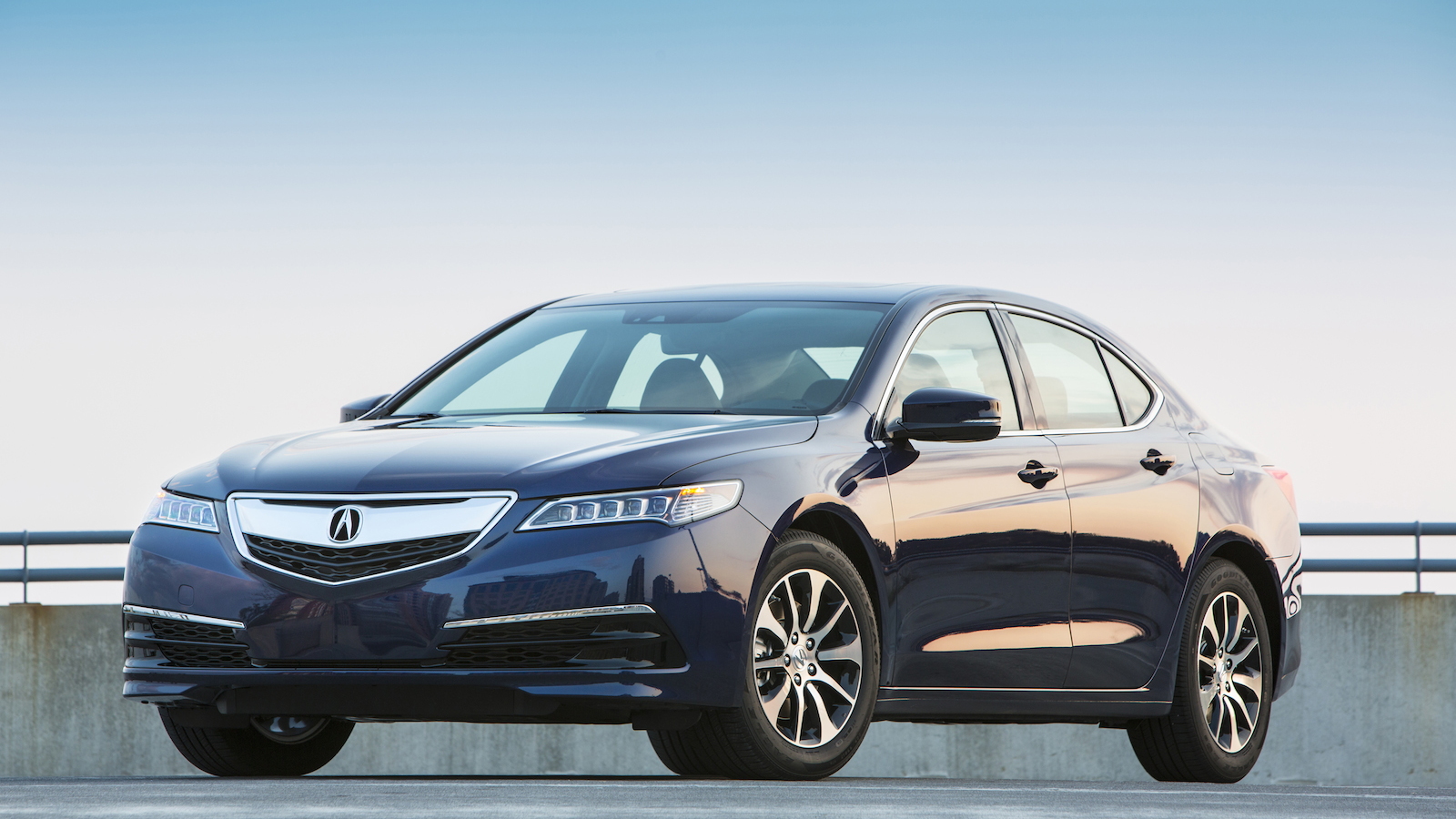 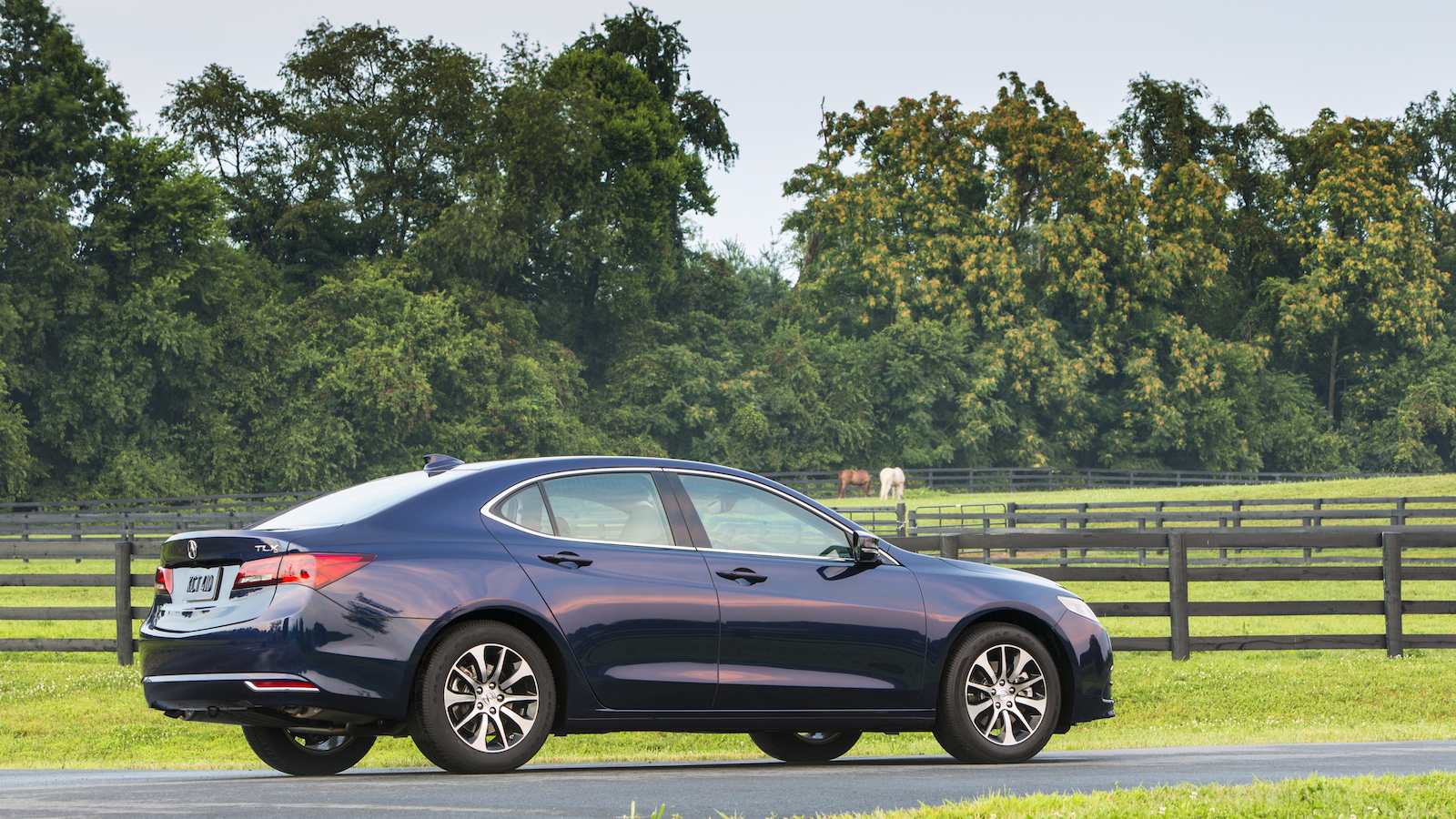 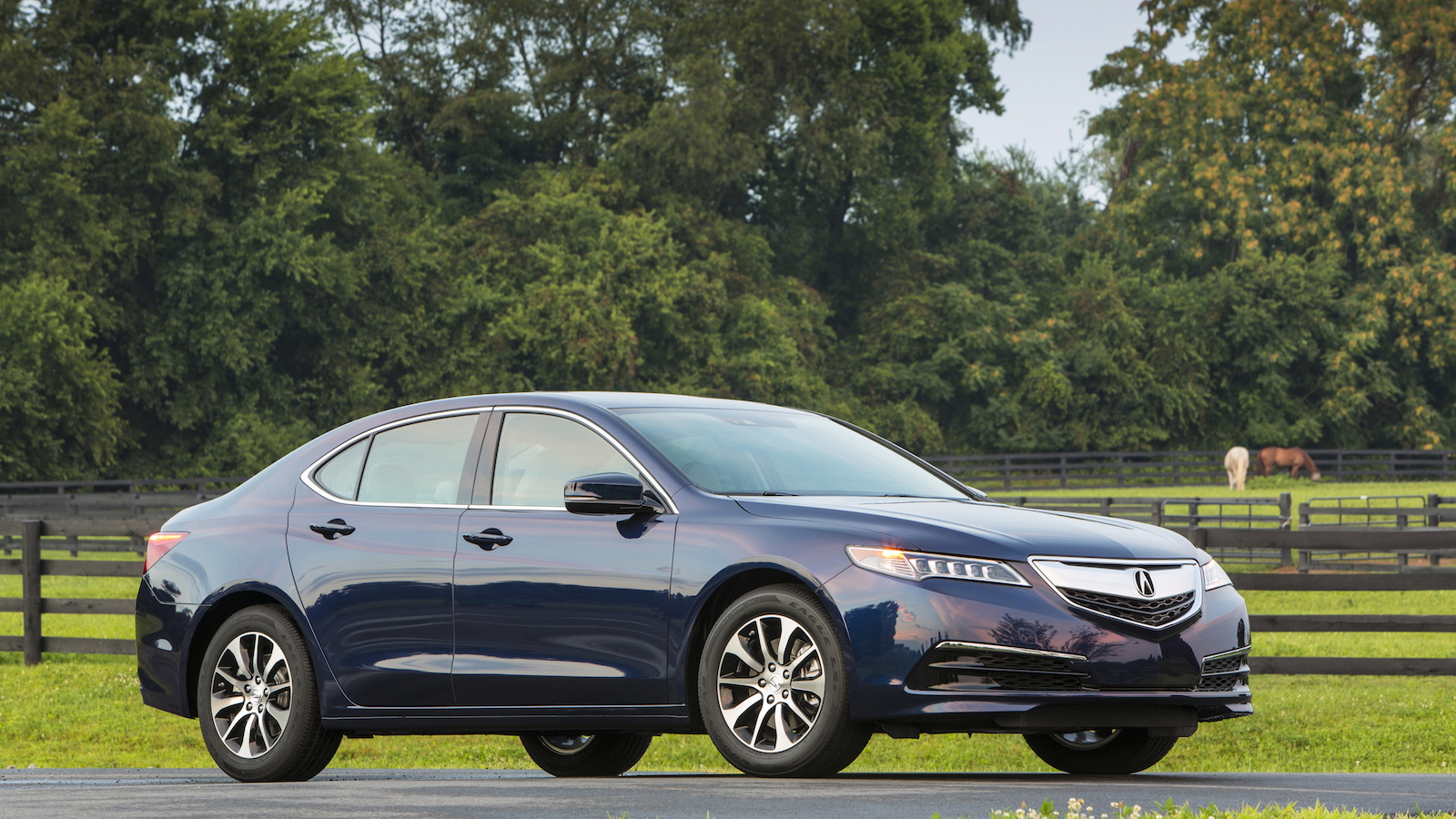 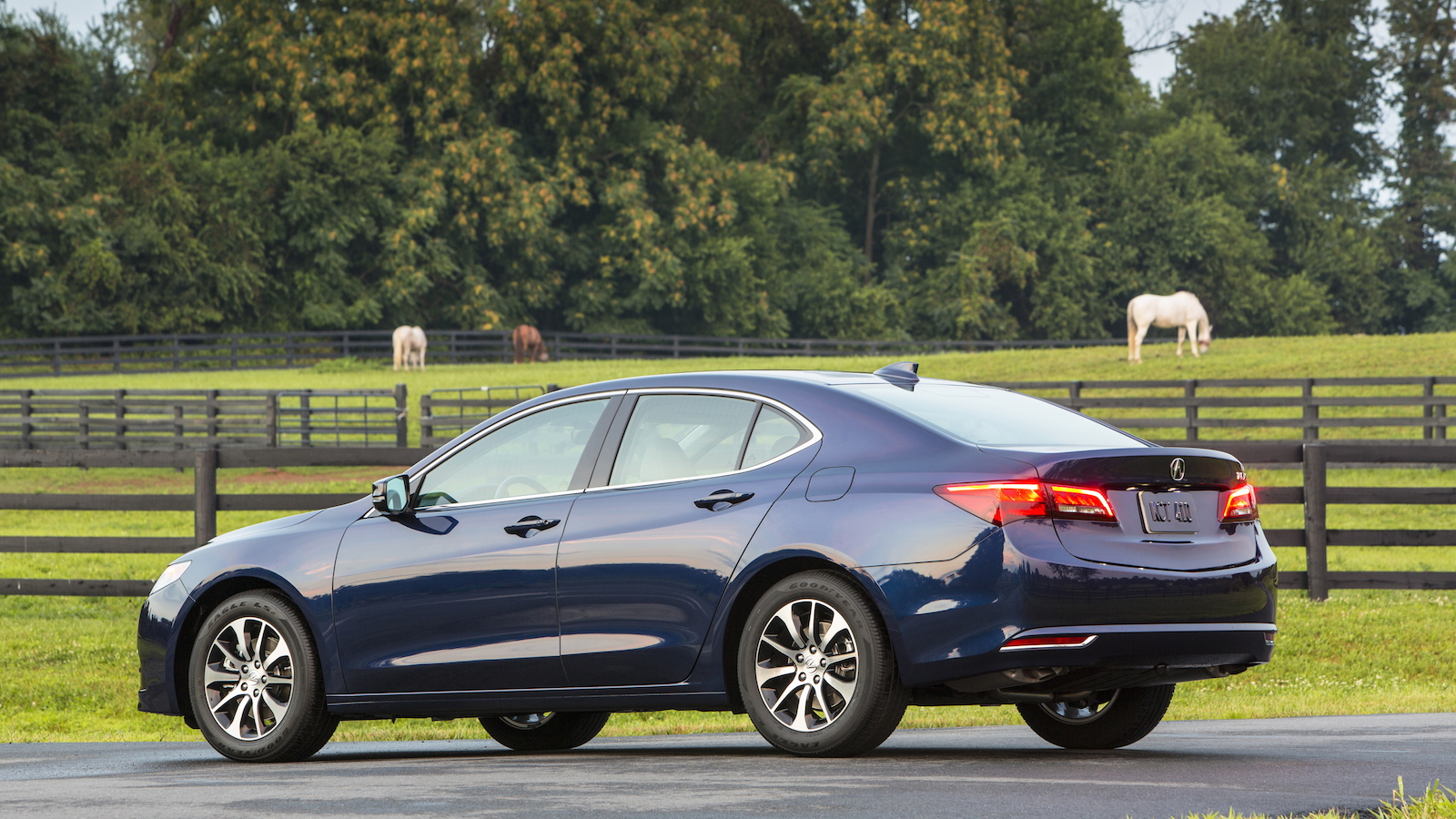 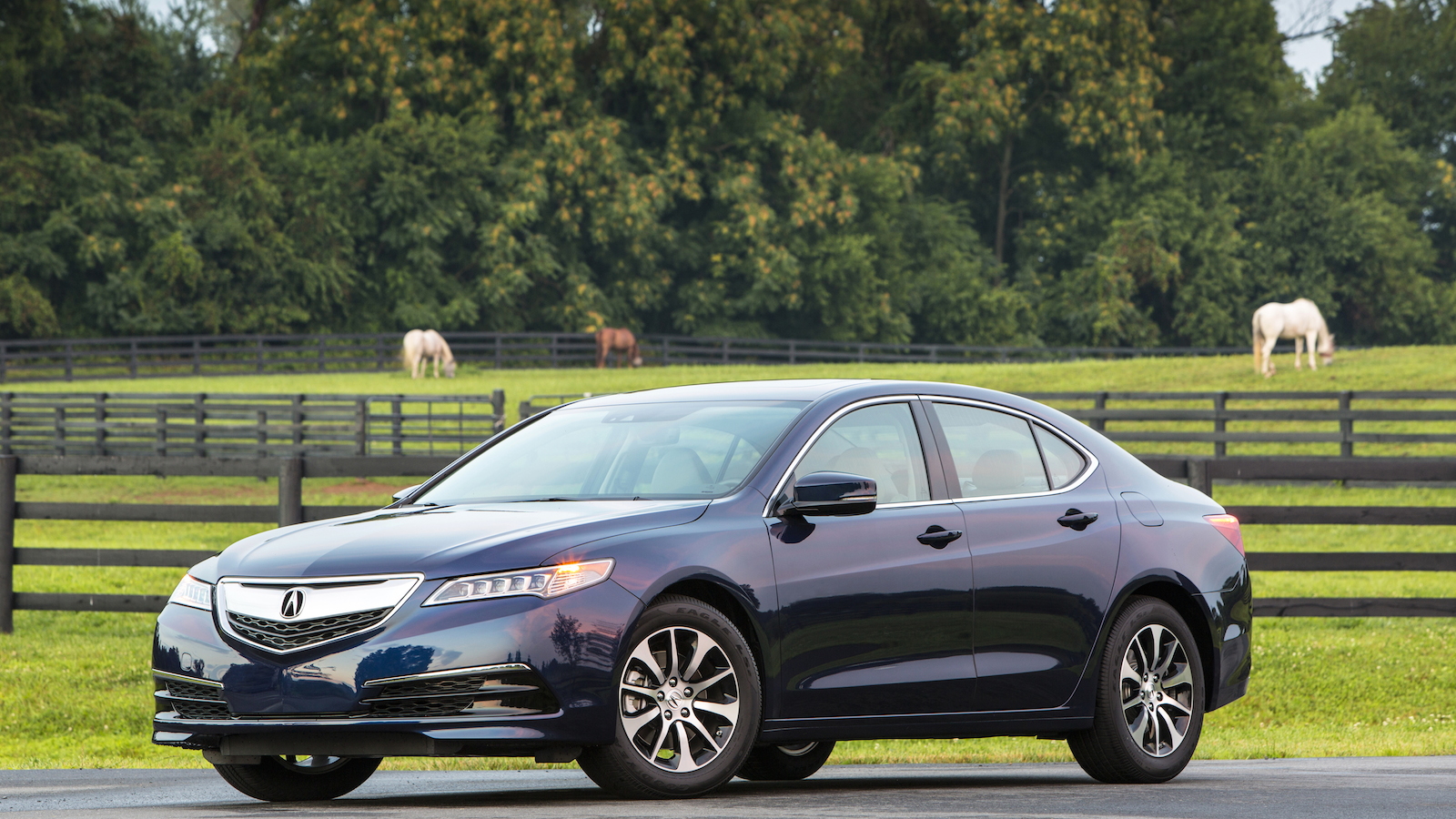 Whatever happened to the Legend, the Integra, or even the Vigor? Acura used to have such brilliant, instantly recognizable model names. Names that inspired thoughts of potential, performance, power, and style.

Now, the brand has adopted the alphabet stew that plagues so much of the rest of the luxury car world. Whether that’s for better or worse, there are aspects of the 2015 Acura TLX that remind us of the good old days of proper names—and proper cars.

How so? The new TLX is pretty darned brilliant, that’s how. It has, hands down, the best-tuned suspension you can buy for the money, especially in the entry premium/luxury segment, and that includes stalwarts like the BMW 3-Series and newcomers like the Cadillac ATS. It’s really that good.

But before we dig into the meat and potatoes of the TLX’s performance, let’s address the preliminaries: just what the heck is it?

The TLX, as its name (sort of) indicates, is the new replacement for a pair of cars: the previous TL and TSX. By merging the two into the TLX, Acura has chosen to split the two former segments, leaving its luxury sedan lineup with a three-car monte: the ILX, TLX, and RLX.

Acura’s resulting product lineup therefore offers cars that are all somewhat between segments: the ILX is, as we noted in our first drive of the car, more like a premium mainstream sedan than a true luxury car; the RLX is somewhere between the BMW 5-Series or Mercedes-Benz E-Class the larger 7-Series/Lexus LS. The TLX, then, is somewhat larger than the common midsize luxury mold, a space inhabited by the 3-Series, C-Class, Audi A4, and Cadillac ATS—but smaller and lighter than the next half-step up.

And yet the TLX is priced like the half-step below. Starting at $30,995 for the four-cylinder, front-drive TLX, and working its way up to the loaded all-wheel-drive V-6 model at $44,700, the 2015 TLX manages to undercut most of the smaller cars even while delivering a competitive—if not quite equivalent—feature package.

But the TLX isn’t really meant to take on the BMWs, Mercedes, Audis, and Cadillacs of the world. Or at least it doesn’t come across that way. The Lexus IS or ES? Sure, those are fair game. Anything from Buick or Lincoln? Easy prey. The top end of the mainstream offerings from Chevy, Ford, Toyota, Nissan, and even Honda? Yep, the TLX will deal handily with those too.

Why is that? Because the TLX’s materials, while nice, don’t shout true premium—certainly not in the way the 2015 Mercedes-Benz C-Class does. The design, from the dual-screen infotainment layout, to the seats, to the rather plain and bleak passenger side of the dashboard, falls short of the style-meets-comfort aesthetic found in the upper end of the class, too. That’s not to say the car truly disappoints in any of those respects; it just doesn’t make as good a first (or second) impression.

After a good stint behind the wheel, however, none of that really matters, because you’re still getting an awful lot of performance and luxury in the TLX—it’s just mostly under the skin.

That’s right, the entry point to the TLX range may be the very best version, even though you can’t get all of the premium add-ons you’ll find at the top of the TLX expanse. Why? Because it’s immaculately balanced, supremely chuckable, and still comfortable enough to drive the in-laws to brunch on Sunday.

That 2.4-liter four-cylinder engine isn’t massively powerful at 206 ponies, but it’s willing, and sounds great when revved out toward the top of the tach. Better yet, it’s mated with a truly brilliant (though counter-intuitive) 8-speed dual-clutch transmission mated to a torque converter. Why a torque converter? Because it completely eliminates all of the lurch and jerk of a traditional dry-clutch arrangement, while delivering all of the crisp upshifts and zingy rev-matched downshifts of the usual arrangement. It’s smart, it’s lightweight, and it just works.

Toss the TLX 2.4 into Sport+ mode via the IDS button, move the gear lever over into manual, and fire off gear changes with the steering wheel-mounted paddles to your heart’s content. It’ll automatically upshift at redline, but it’ll also hold a lower gear if you’re trying to limit torque application coming out of a fast corner. It’s most exactly what you want—and certainly never really objectionable.

But the TLX sings the sweetest when flitting through yumping, curving, switch-backing twists of two-lane. Nestled in the 3,400-pound range, the car feels lighter still, and the brilliant suspension tune leaves the steering feeling taut and accurate (if not quite precise), the car sorted over bumps, flat at the apexes, and ready to leap out of the corners at the top of the four-banger’s abilities. The Precision All-Wheel Steer (P-AWS) system adds to the feeling of nimbleness at lower speeds, and enhances stability at freeway speeds (and higher). P-AWS is standard on the four-cylinder model.

Step up to the V-6 models and some of that lightweight fling-ability goes away, lost to weight (about 3,600 lbs depending on equipment), but also to the new 9-speed automatic transmission’s vagaries. Still offering Sport and Sport+ modes, and still offering the manual paddle shifters, the 9-speed gearbox’s extra cog does little to improve the experience, while its programming does much to contrast sharply with the refined brilliance of the 8-speed dual-clutch. Shifts are jerky, slow, and lazy; downshifts lack the zing you want to match revs; and when switching from reverse to drive, expect to wait a good 3-5 seconds before anything—anything at all—happens.

With the 290-horsepower V-6, the extra torque also begins to elicit some bad behavior from the front-drive model, spinning the wheels to the point of screechy tires even with traction control on when taking off hard from a stop. While the V-6’s power upgrade over the four is noticeable, it’s not massive, and the better-behaved four-cylinder seems a better match for the TLX’s balanced chassis. Adding Super Handling All-Wheel Drive (SH-AWD) to the V-6 (the only way it’s available) takes away the wheel spin issues, making the TLX 3.5 feel much more sure-footed, but the extra weight (curb weight with SH-AWD sits around 3,750-3,800 lbs) saps acceleration further, leaving it feeling a bit flat.

At the end of a quick six hours in the TLX, covering some 270 miles, we found the car to be a worthy replacement to the previous TL--cabin space is nearly as good as the larger outgoing car’s, thanks to a shared wheelbase--and a marked upgrade from the fun-but-wheezy TSX.

At the upper end of the spectrum—edging into the mid-$40,000s—the TLX begins to look less attractive than some of the available alternatives, particularly the 2015 Mercedes-Benz C300 or C400, but at the entry point, even with all of the available option packages, the roughly $35,000 you’ll spend on a four-cylinder TLX feels like a remarkable bargain, particularly if you like driving a good car quickly. Yes, it’s front-wheel drive, but go drive it before you tell us it’s rear-drive or bust. You’ll be surprised.