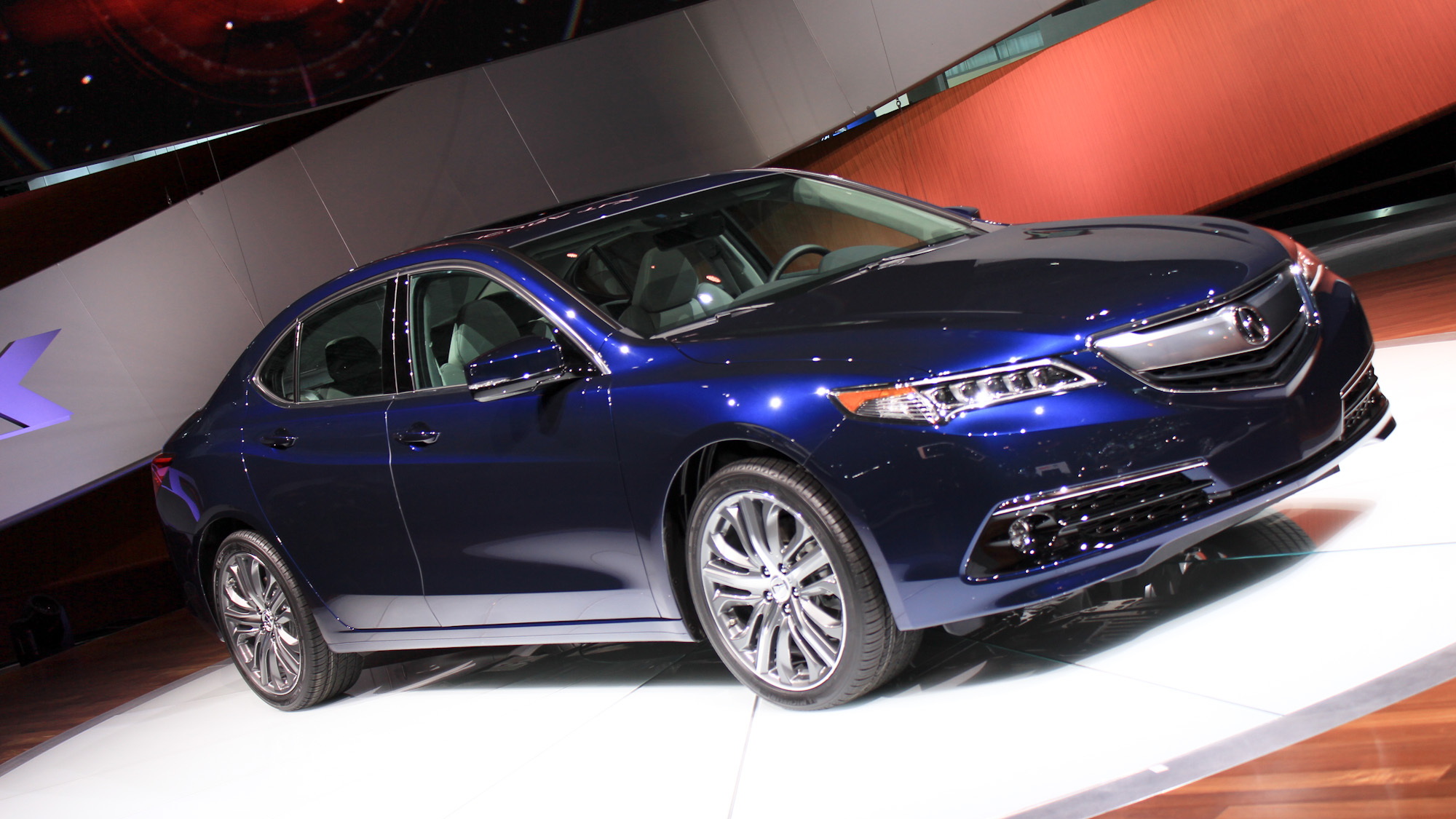 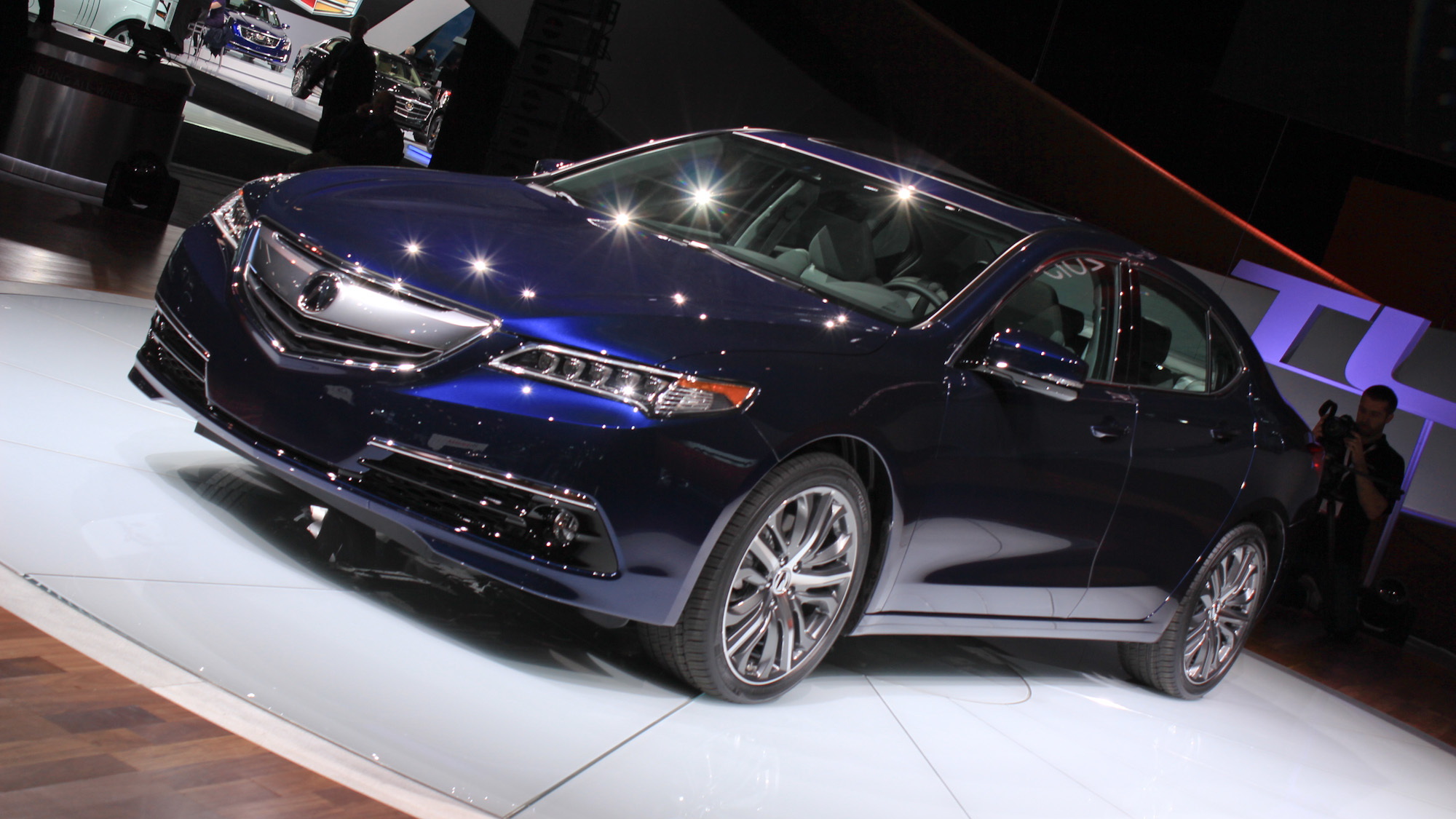 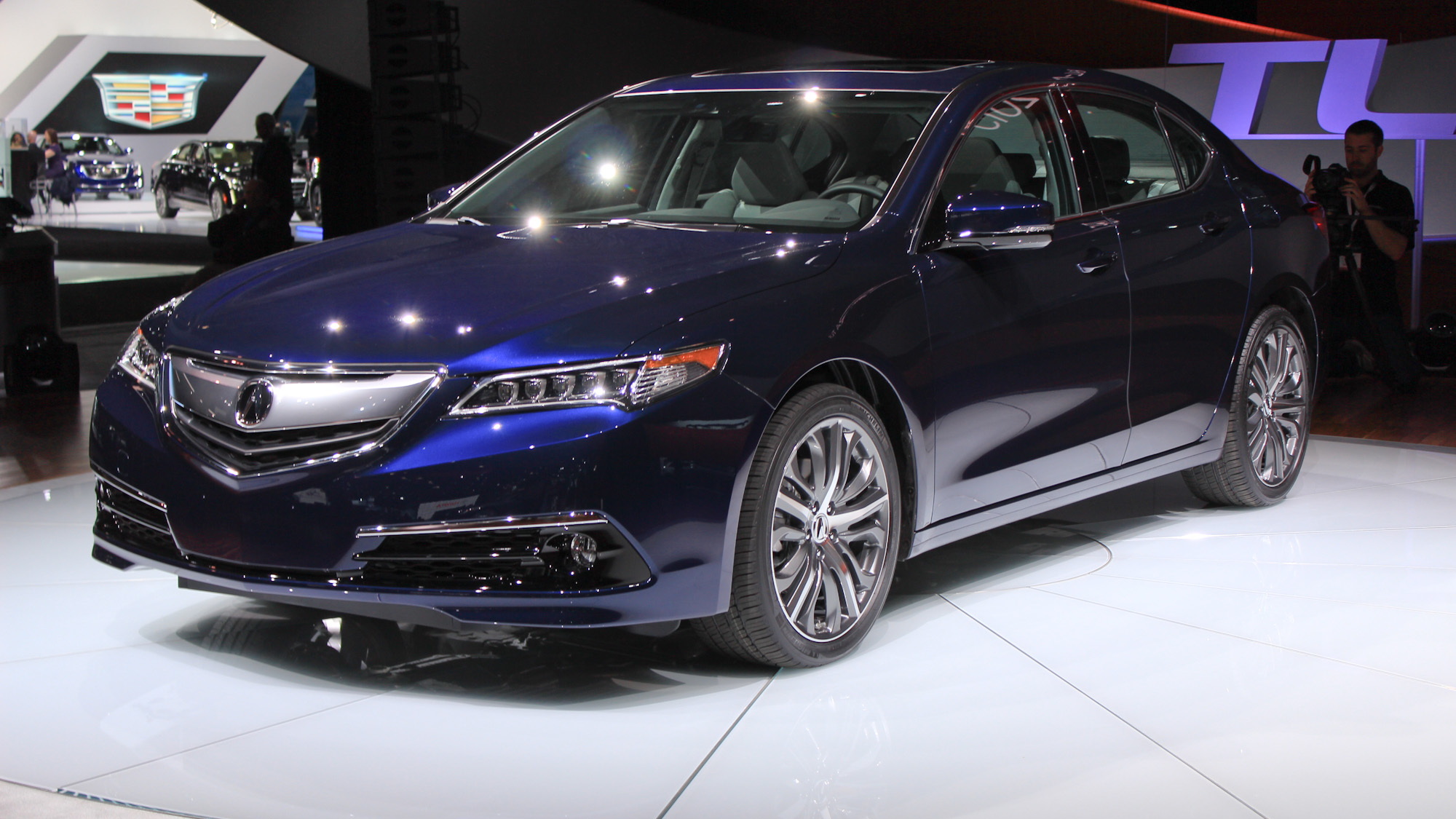 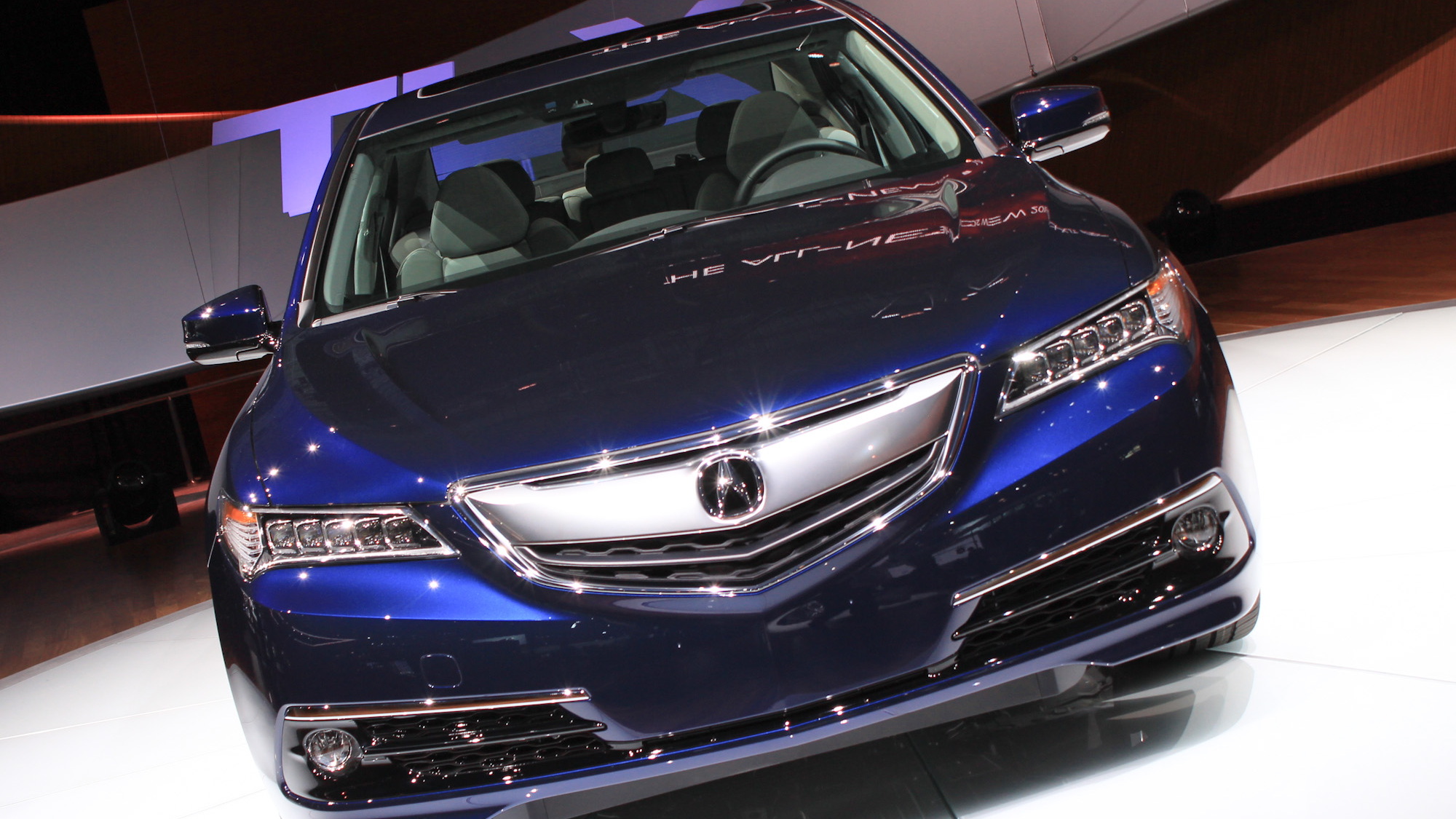 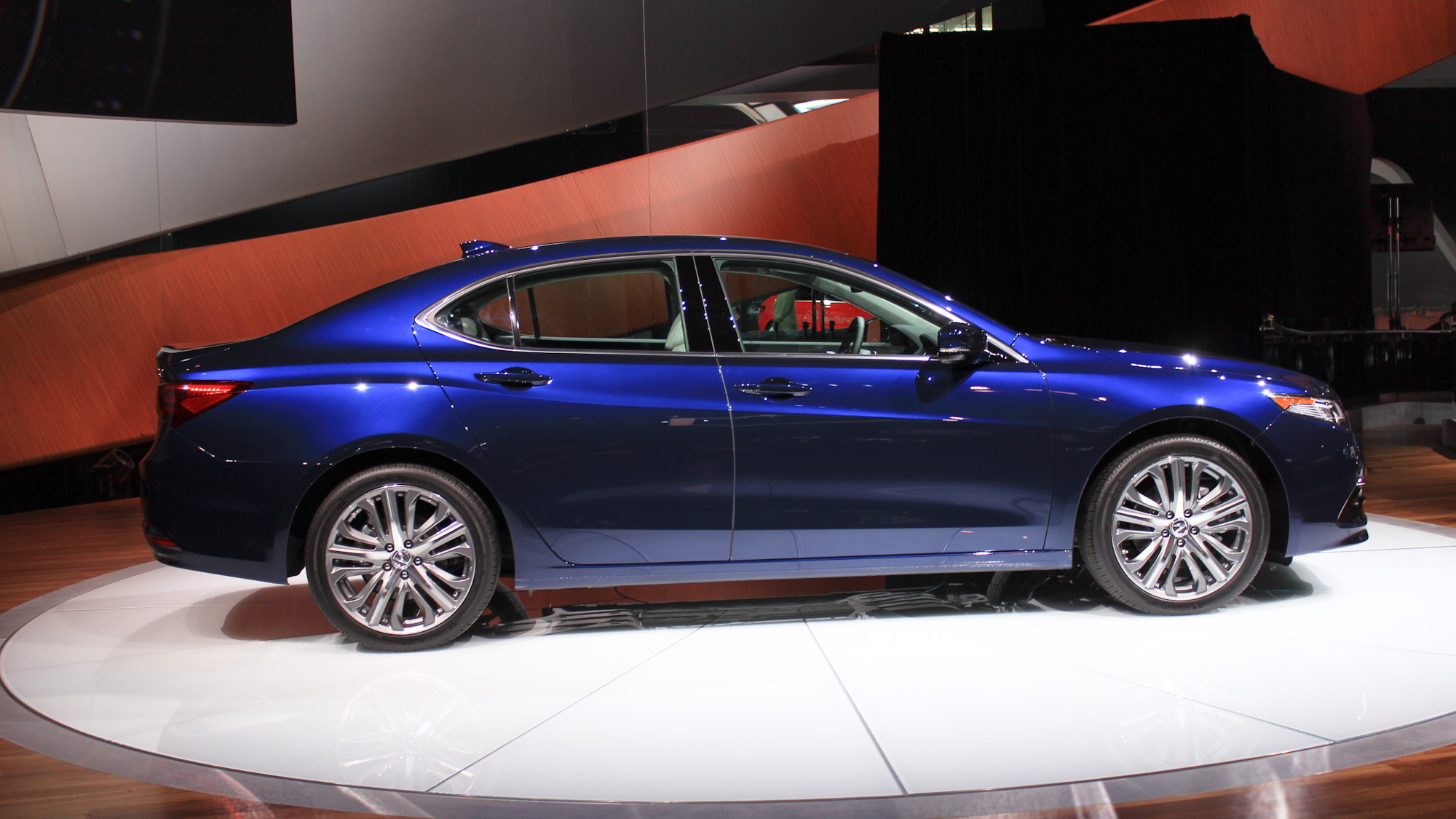 37
photos
Back at January’s 2014 Detroit Auto Show we were treated with a thinly veiled ‘prototype’ version of Acura’s 2015 TLX sedan, the new midsizer that’s set to replace both the TSX and TL in Acura’s lineup. Today the automaker revealed the production version of the TLX at the 2014 New York Auto Show. The car will sail into showrooms this summer, as a 2015 model, and brings with it fresh new styling and fuel-efficient engines backed by new eight- and nine-speed transmissions.

We can confirm that the 2015 TLX will be 3.8 inches shorter than the TL but have the same 109.3-inch wheelbase. The base model will feature a 2.4-liter four-cylinder paired with Honda’s new eight-speed dual-clutch gearbox with torque converter. The engine delivers 206 horsepower and should return fuel economy of 24/35 mpg city/highway and 28 mpg combined. Those seeking more performance will be able to opt for a 3.5-liter V-6 hooked up to a new nine-speed automatic. This engine will offer 290 horsepower and fuel economy of 21/34 mpg city/highway and 25 mpg combined.

Front-wheel drive will be standard but to improve handling the 2015 TLX will come with Acura’s Precision All-Wheel Steer (P-AWS) four-wheel-steering system. Available as an option will be the automaker’s Super-Handling All-Wheel-Drive (SH-AWD) system, although it's only offered on V-6 models. The version featured in the 2015 TLX is said to be a next-generation design 25 percent lighter than the current one.

MUST SEE: 2015 Mercier-Jones Supercraft Is The Bugatti Veyron Of Hovercraft

In designing the 2015 TLX, Acura has managed to reduce the curb weight considerably compared to the previous TL. As an example, the front-wheel-drive TLX with the V-6 has a curb weight just under 3,600 pounds, about 145 pounds lighter than the comparable TL. This is despite the two cars having a similar wheelbase and the TLX being packed with a lot more features.

On the outside, the car features Acura’s jewel-like LED headlights, LED-accented side mirrors, and LED tail-lights. The styling is relatively clean, for an Acura, and much sportier than the larger RLX. Inside, there is ample space for five and a new 60/40-split rear seat that makes storage easier for larger items. The trunk also has a wider and deeper opening than the one found on the TL.

An abundance of luxury features and technologies are available on the TLX, including heated and ventilated front seats, real wood trim, the AcuraLink cloud-based infotainment system, Bluetooth connectivity, 3D views for the navigation, and real-time traffic and weather updates. As a special touch, TLX models featuring the V-6 push-button gear selector instead of the usual shifter.


Acura’s TLX needs to impress as sales of its sedan models have been on the decline, despite its SUVs doing reasonably well. Last year Acura’s sales grew 5.9 percent to 165,436 units, yet combined sales of its ILX, TSX, TL and RLX dropped 10 percent over the period. Do you think the 2015 TLX, based on these preliminary specs, will help alleviate the situation? Let us know in the comments section below. And for more from the 2014 New York Auto Show, visit our dedicated hub.