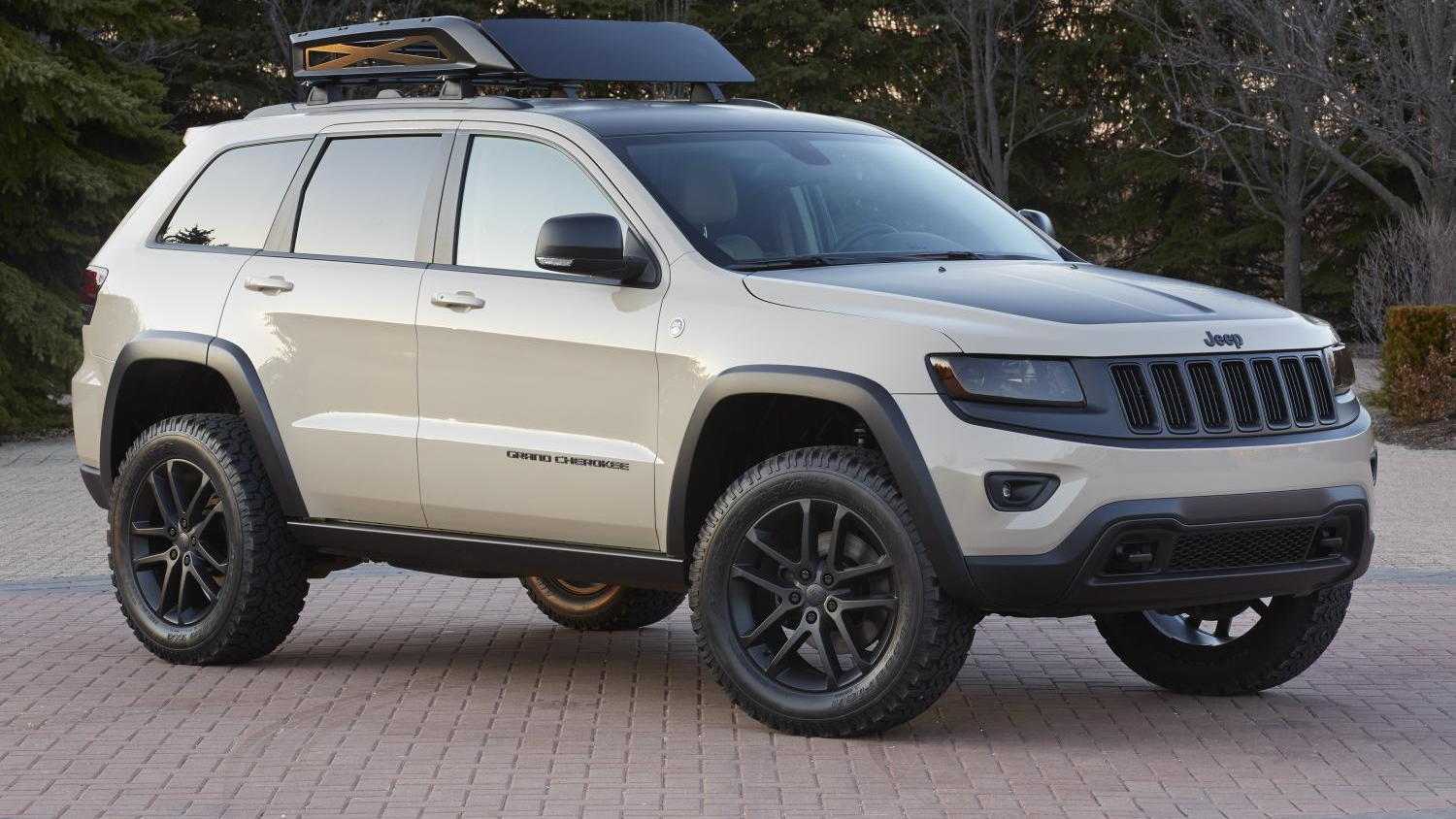 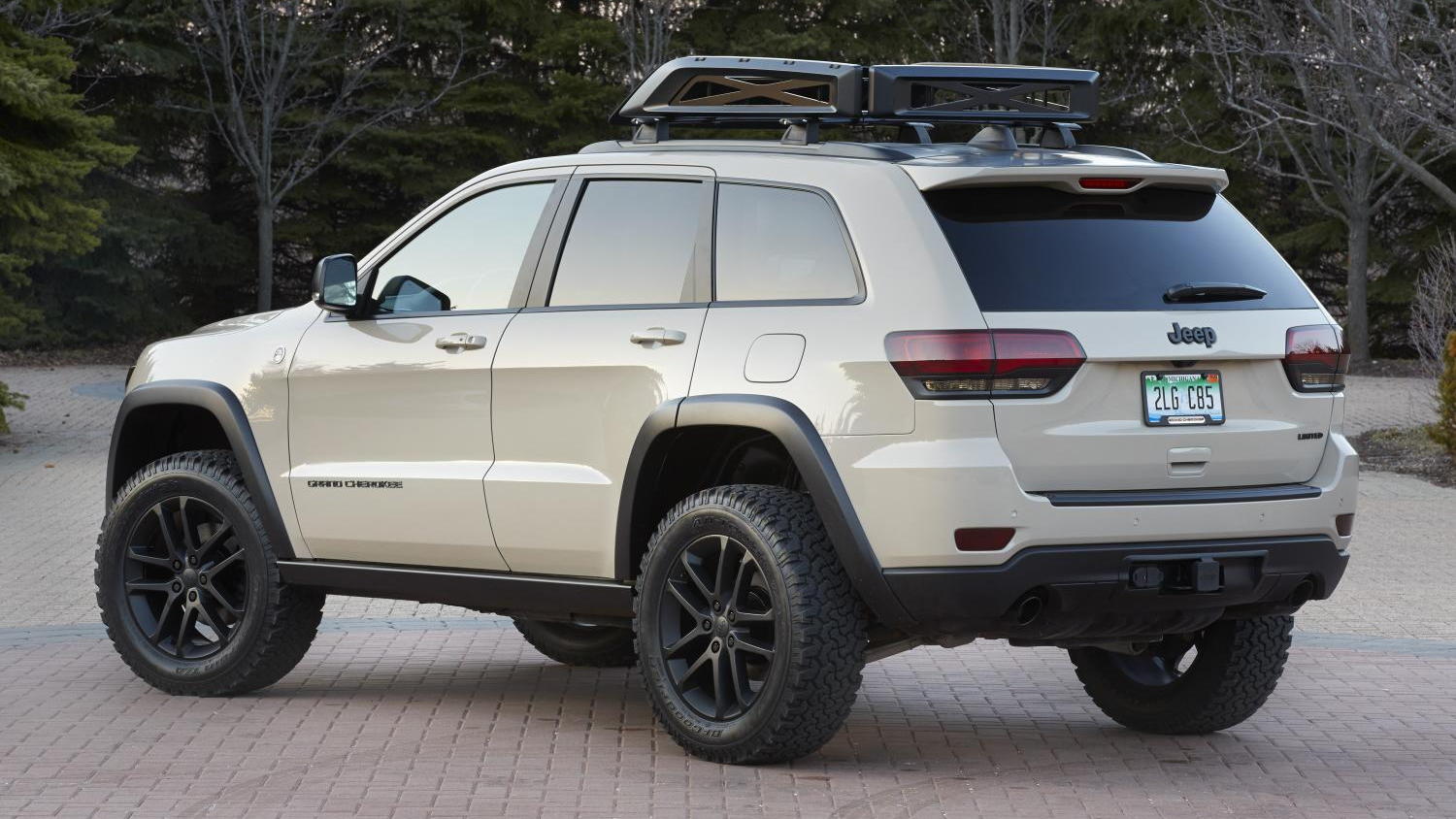 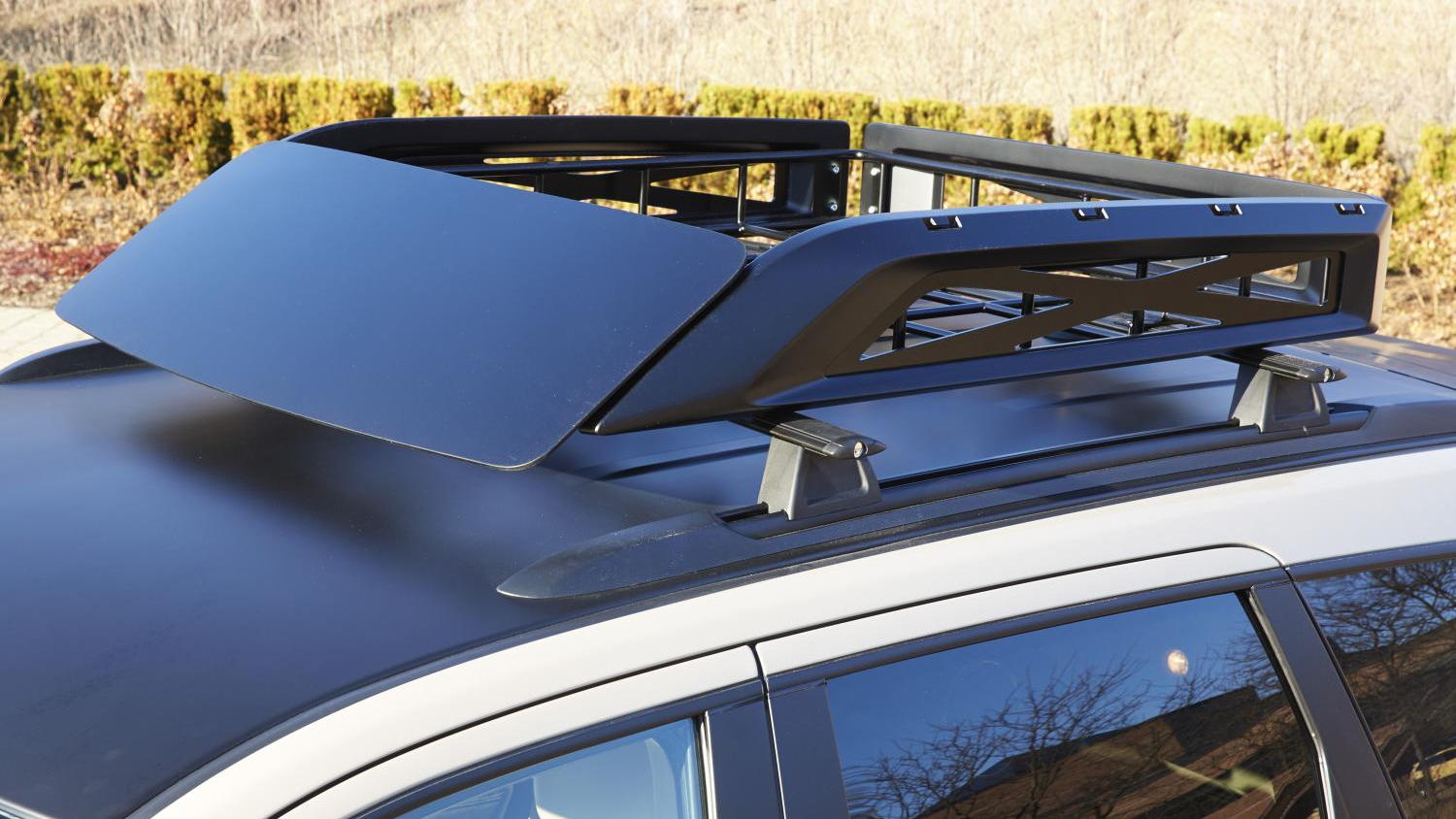 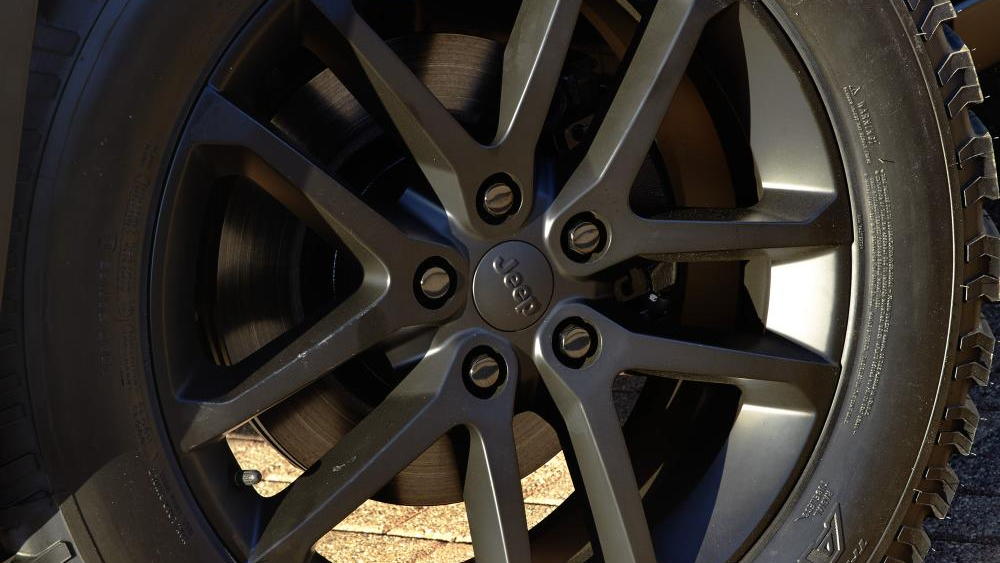 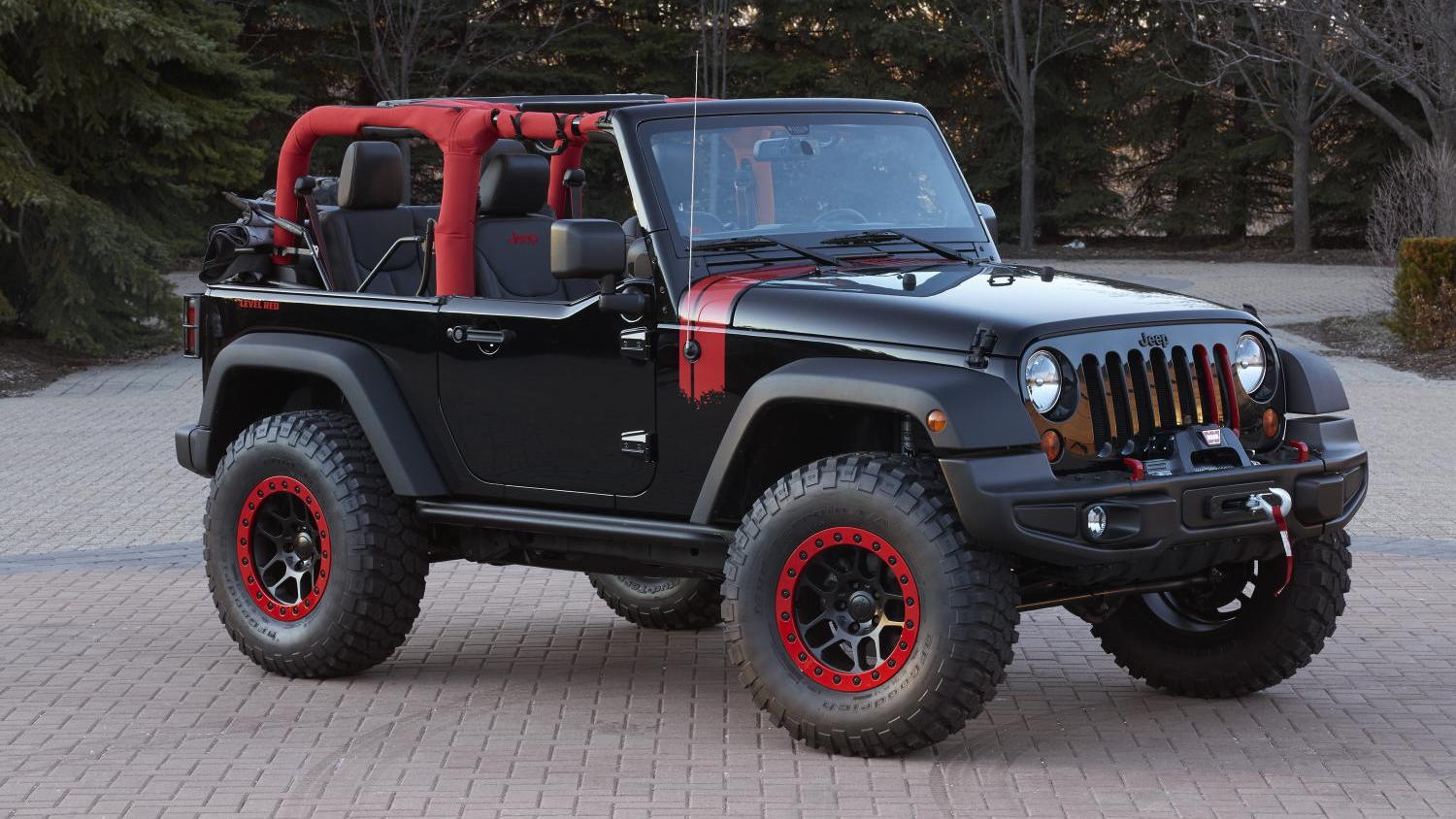 24
photos
It's getting close to Easter, which means a few things. The Northeast can almost safely put away their snow shovels, the Cadburry egg commercial that's been running since the early '90s is on a nonstop loop, and it's time for Jeep to head to Moab.

For many years now, Jeep and its biggest fans head into the desert for the Moab Easter Jeep Safari. The automaker uses this event as a platform to show off a handful of concept vehicles, and this year will be no exception. In fact, Jeep is rolling out six vehicles that are all clad in a plethora of performance parts from the Mopar catalog.

First up is the Jeep Grand Cherokee EcoDiesel Trail Warrior.  The name is a mouthful but this concept Jeep is one of our favorites. Ride height is raised, a roof basket sits up top, and large aluminum wheels with BFGoodrich tires sit underneath. It's a package that's perfect for the weekend off-roader that still needs to run his rig to work during the week. Plus, thanks to that diesel motor, the excursions can run long between fill ups.

On the other end of the spectrum is the Jeep Wrangler Level Red. That Level Red name is a nod to the difficulty level of off-road trails. Guess which level is the most difficult... if you guessed Level Green, you're clearly not trying very hard. This Level Red Wrangler sports Dana 44 crate axles and an upgraded transfer case to help it walk along the rocks. A set of 35-inch tires help complete not just the look but help top out the level of capability.

Those who go off-roading like to do so with friends. That's why Jeep is also rolling out the Wrangler MOJO, which is essentially a (slightly) toned-down version of the Level Red, but in a four door variant. A slew of upgrades under the skin make it more than capable, and some of the body work butches up the whole affair quite nicely. In fact, Jeep has even included a set of prototype LED headlights on the MOJO, which claim to make night running even easier. We prefer the look of the MOJO to the Level Red, plus we can fit more people, our dogs, and a cooler of adult beverages for when the day of driving is over.

Okay, we take that back... this Wrangler wins in the looks department. It's the Jeep Wrangler Maximum Performance, and it's built to handle whatever Moab can throw at it. A pair of Dan 60 axles are paired with 4.88 gearing and a 4:1 Rock-Track transfer case. There is a four-inch lift that helps make room for the massive 37-inch BFGoodrich tires. All of that gear helps push the Maximum Performance along with a 70:1 crawl ratio.

Additionally, this blue machine gets the same LED lighting as the MOJO, but also gets more trail lighting as well. If you want to turn night into day, this is your machine.

This is the Jeep Cherokee Adventurer. It's pretty much a mildly upgraded Trailhawk with a sharp paint scheme, some skid plating underneath, and a nice roof rack. Inside, the cabin space has plenty of upgraded materials that will help you wash it all down after you get it all dirty.

Jeep is calling this concept it's most extreme Cherokee ever. On the outside, the skin is covered in Silver Satin Gloss paint. That seems like an oxymoron but the picture does sort of like both satiny and glossy, so kudos to breaking our brains on that one. Under that confusing skin, Jeep have fitted the Cherokee Dakar with all sorts of skid plates and protection pieces. The wheel openings have been cranked wider to allow for 33-inch BFGoodrich Mud Terrain tires, and a lift kit brings the whole affair a bit further from the ground. The crawl ratio has been raised to 48:1, the approach angle is now 32 degrees, and the departure angle is 39 degrees.

It's a Trailhawk that hit the gym, and is now ready to hit the clubs in search of dirt-covered mates.

All six vehicles will be spending their Easter holiday in Moab where they will be put to the test in front of their harshest critics. Should make for a weekend that's far more fun than sitting home and hunting for eggs.