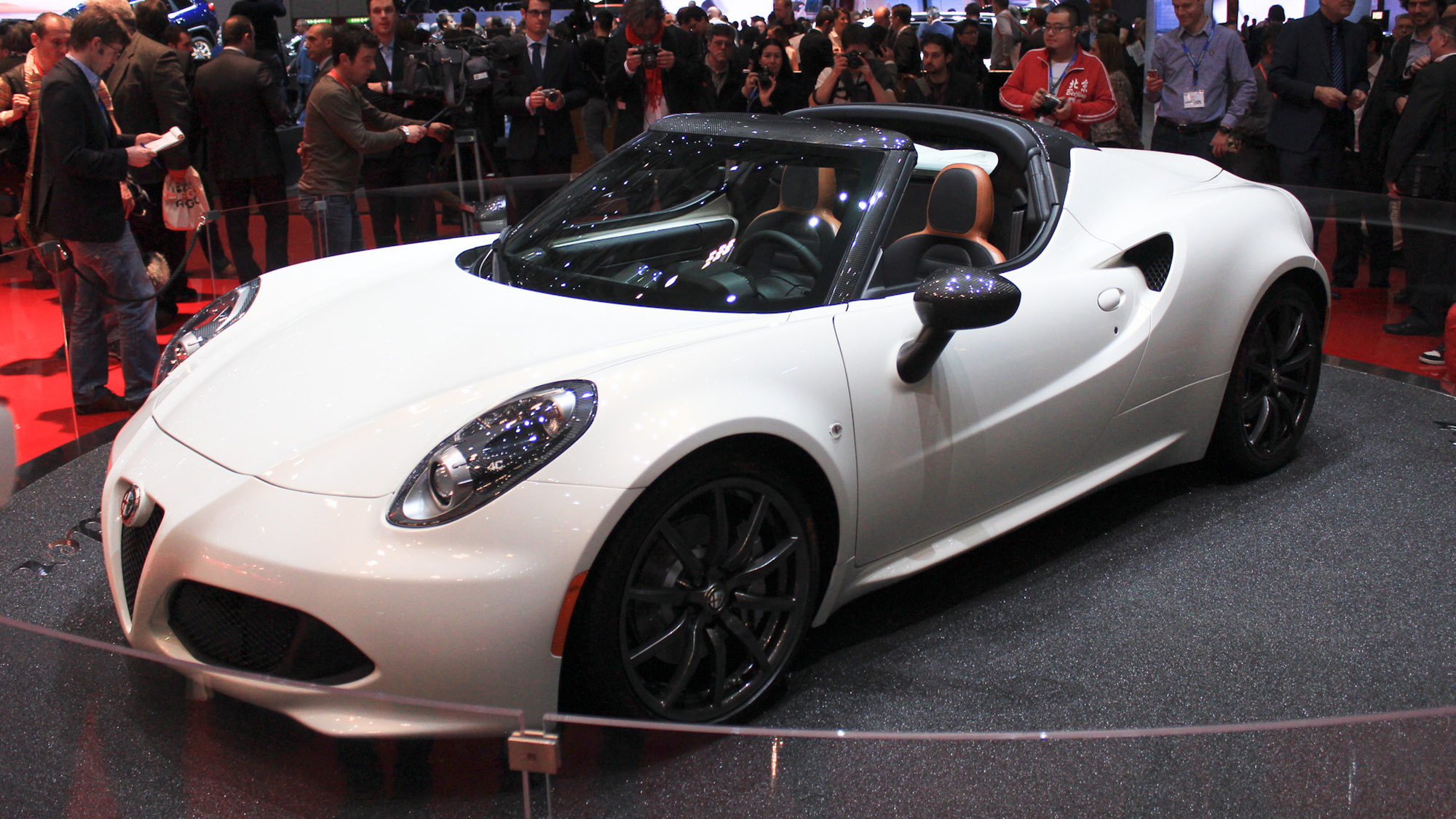 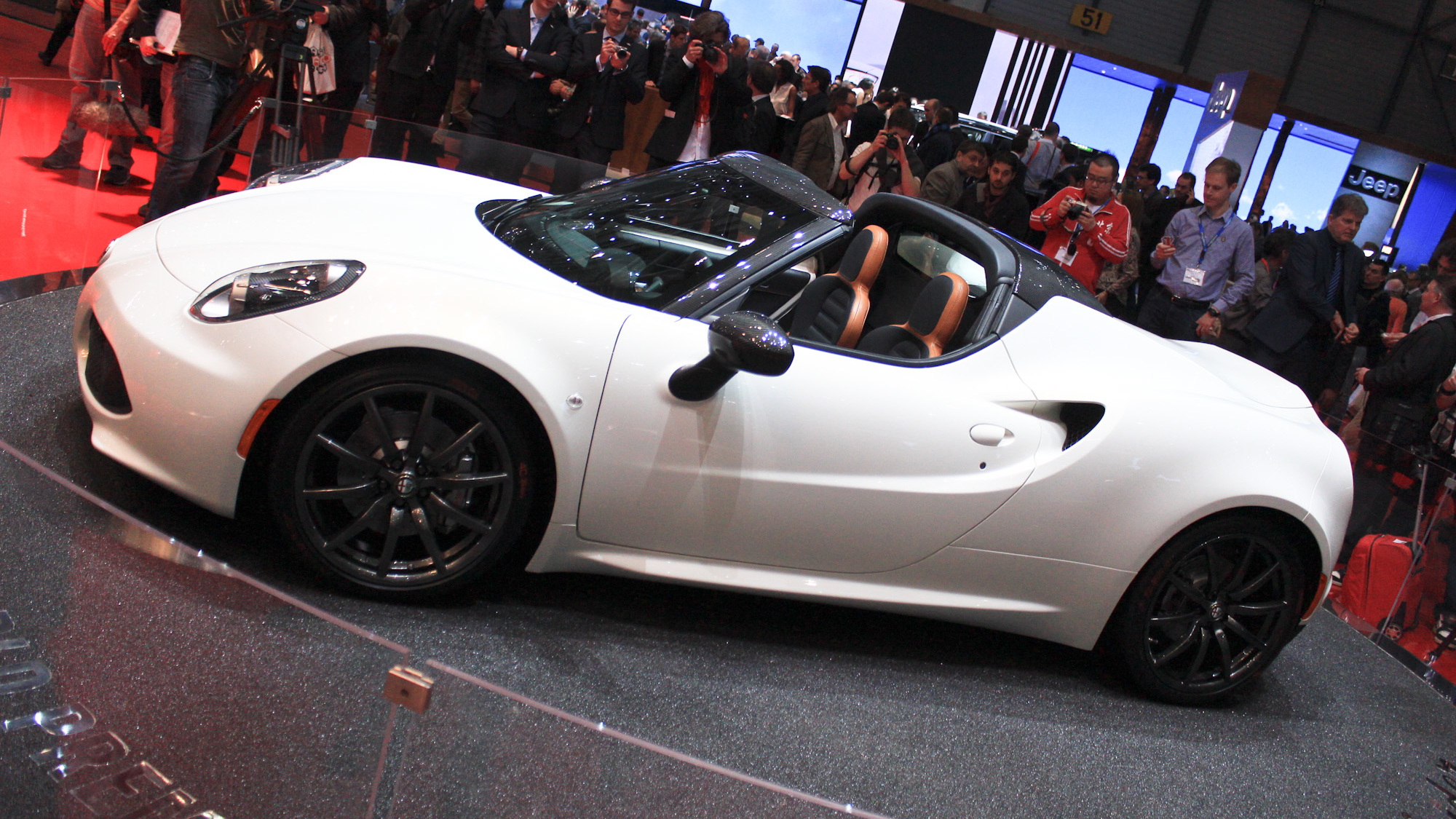 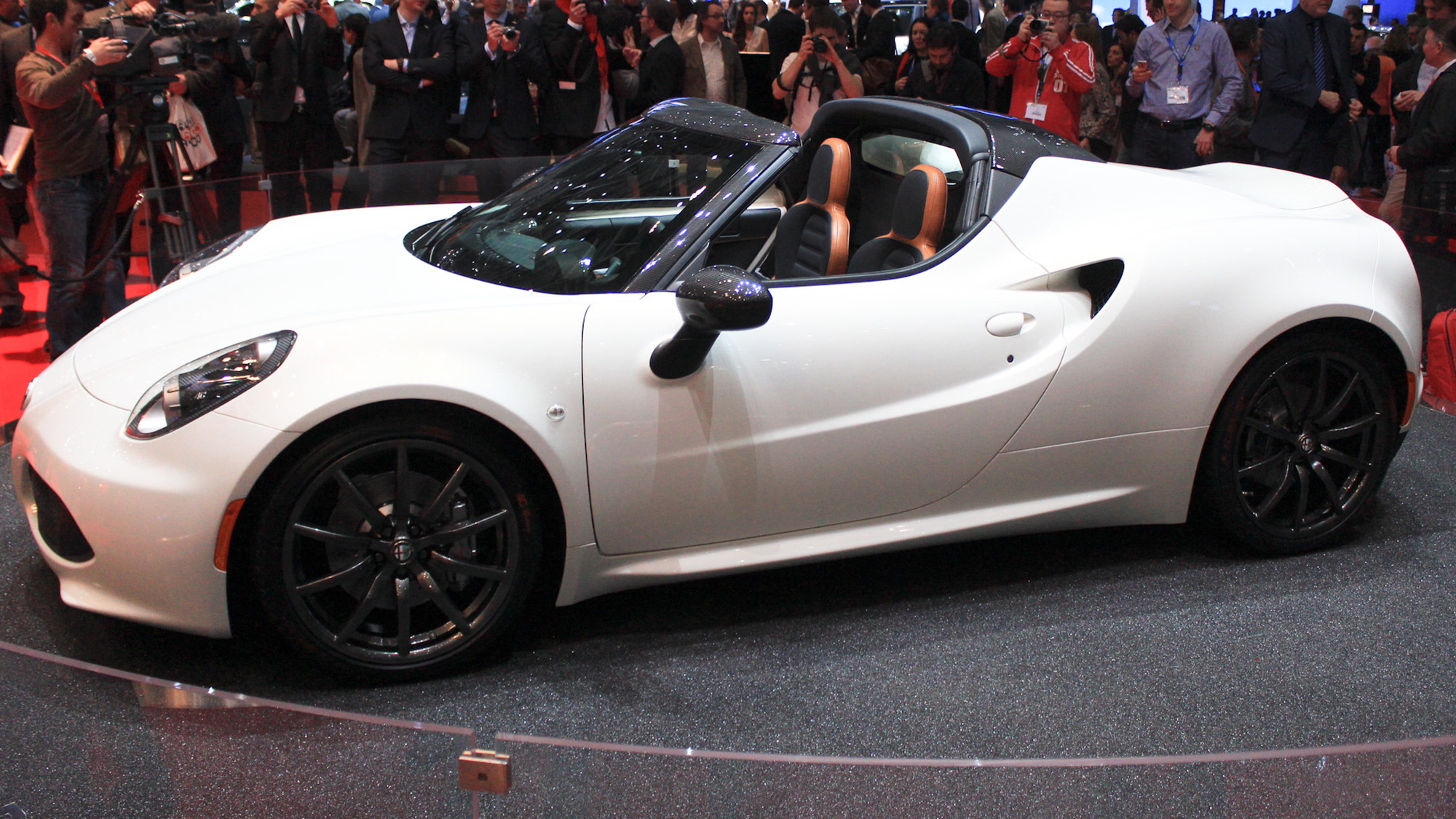 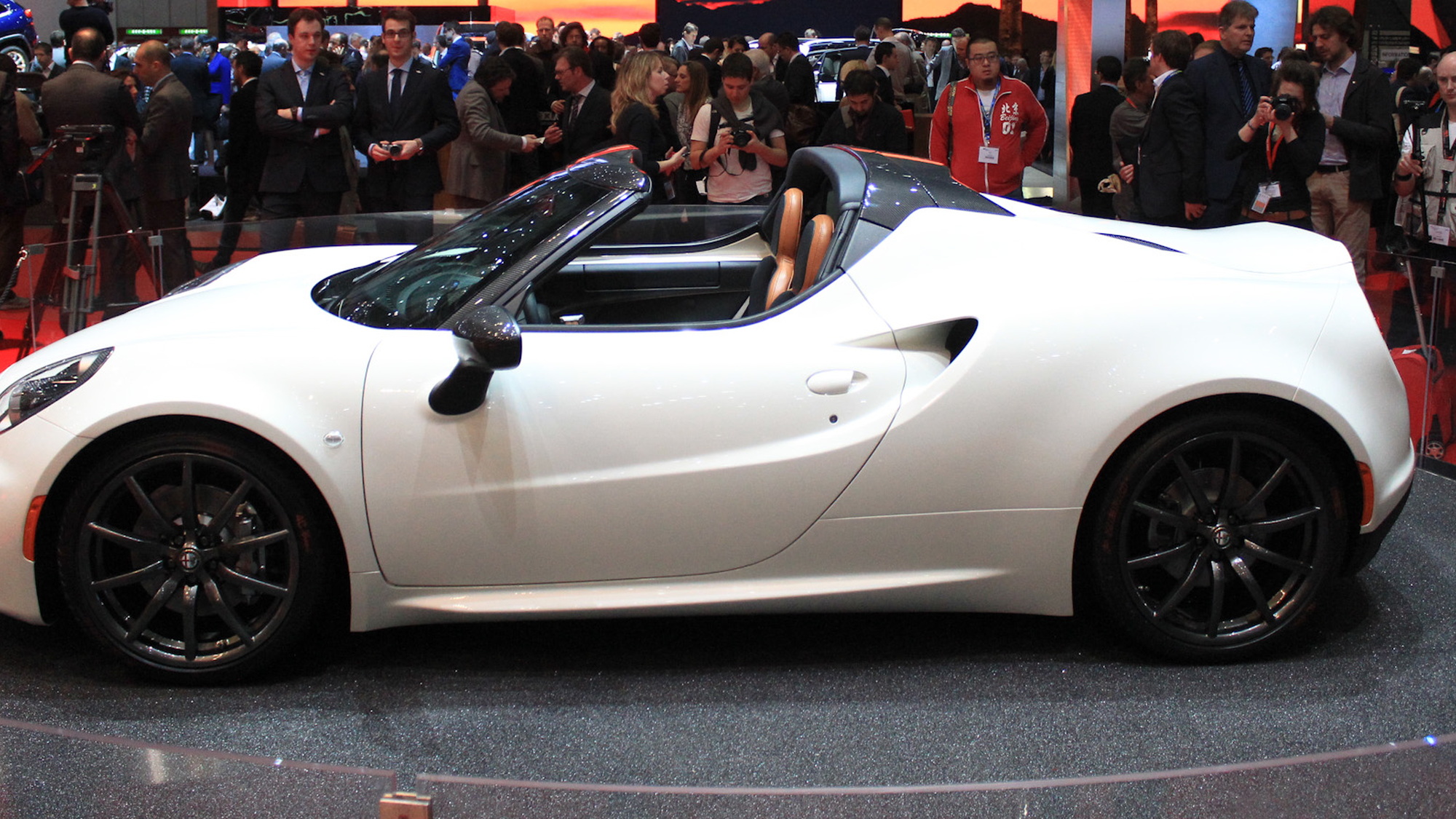 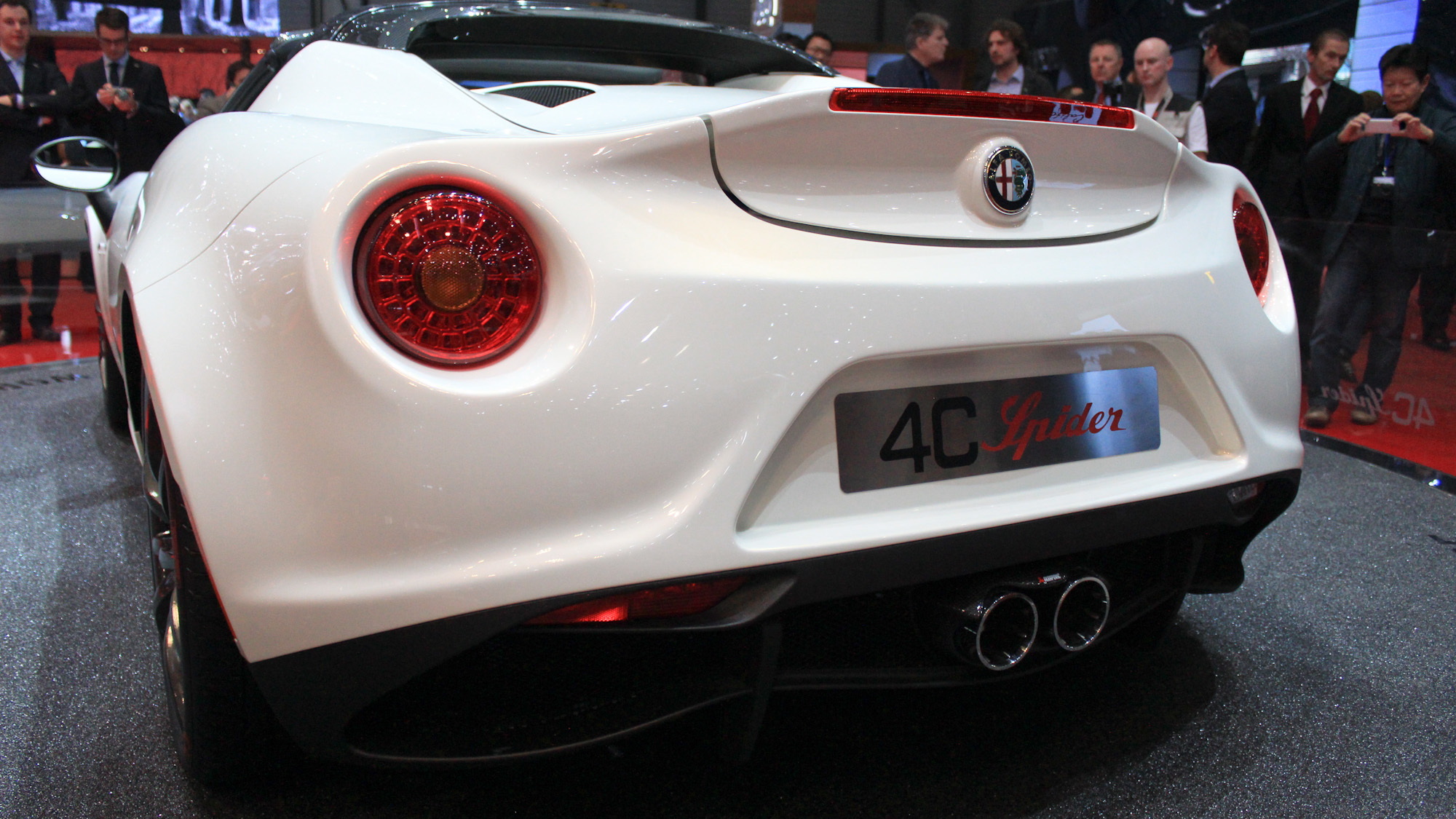 30
photos
At the 2011 Geneva Motor Show we first saw the 4C in concept form. Two years later we saw the production version revealed. Now, at the 2014 Geneva Motor Show, Alfa Romeo has pulled the covers off a new 4C Spider concept, which has already been confirmed for production in early 2015.

The most obvious feature of the 4C Spider concept is its removable roof. However, there are also a number of subtle--and somewhat welcome--elements previewed on the concept that will likely be introduced across the 4C range at a later date.

The convertible 4C concept shows a new clamshell headlight design that drops the bug-like light units fitted to the production 4C. The concept also wears differentiated diameter wheels: an 18-inch pair at the front and 19-inch in the rear.  Finally, the concept also features a special three-layer white paint finish that gives off a shimmering look.

As for the roof, it is a soft top, most likely manually adjusted. Modifications to the 4C body include a specific carbon roll bar cover and a striking carbon windscreen ring, both of which help improve stiffness. The 4C’s rear window has also been replaced with a continuation of the bodywork on the 4C Spider concept.

Keeping weight down was still a focus of the design, and in this area the engineers have excelled. Just like the 4C, the 4C spider concept has a dry weight of less than 2,200 pounds. Some additional modifications were made to the suspension, which Alfa says was necessary to ensure the convertible 4C offered the same feeling and driving pleasure as the coupe.

No changes have been made to the 4C’s powerplant, which remains a turbocharged 1.75-liter four-cylinder rated at 240 horsepower. The engine is paired with a seven-speed dual-clutch transmission and in the 4C Spider concept has been fitted with a new titanium and carbon exhaust system.

This is a dual-stage central exhaust system concept with titanium and carbon tailpipes by Akrapovic, a company which produces competition exhaust systems for Moto GP, Superbike, Supersport, Motocross and Enduro. Among its most distinctive features is the electrically operated valve technology, which can be operated at the flip of a switch, allowing the driver to control the volume of the car’s exhaust note.

The 4C Spider concept is just the latest in a line of sultry convertible Alfas, such as Giulietta Spider from the 1950s or the mythical Duetto made famous by the classic film, The Graduate.

Unfortunately, the reveal of the 4C Spider concept coincides with news that Alfa Romeo will likely miss out on a new convertible sports car that was being developed on the bones of the next-generation Mazda MX-5. The new model, which had yet to be named, was due to hit showrooms in early 2015, about when the production 4C Spider is due. The regular 4C coupe will land in showrooms this June.