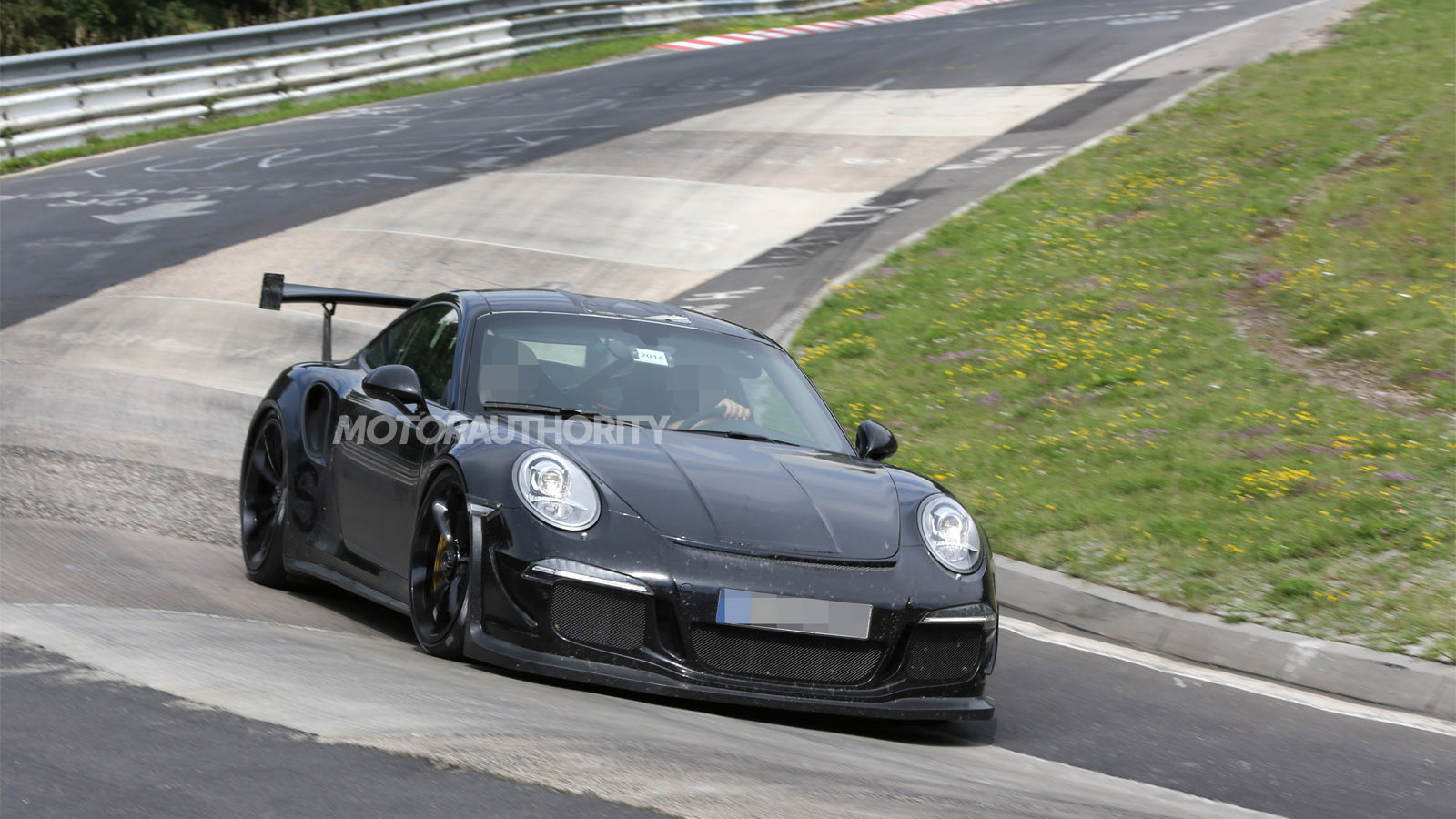 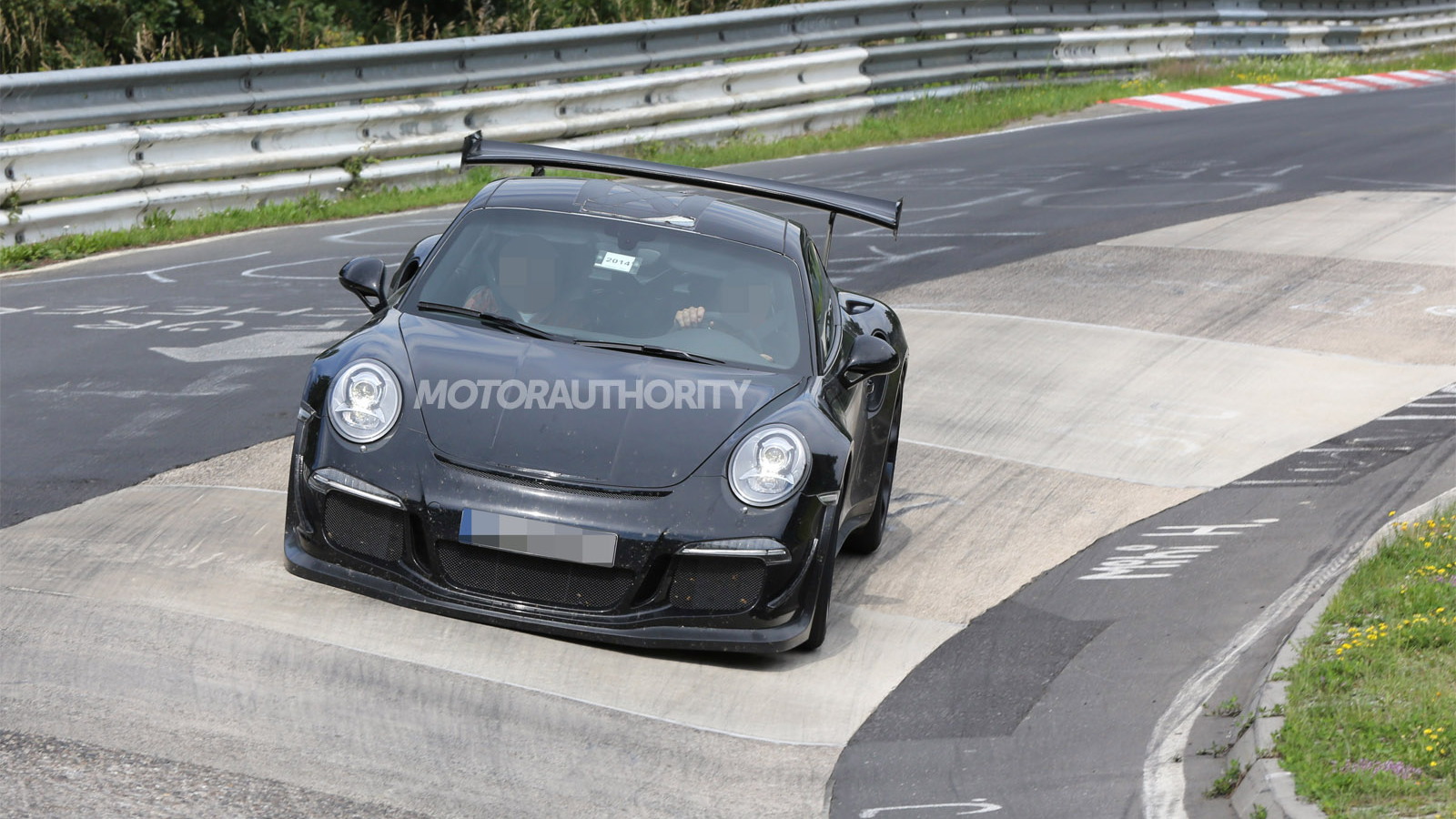 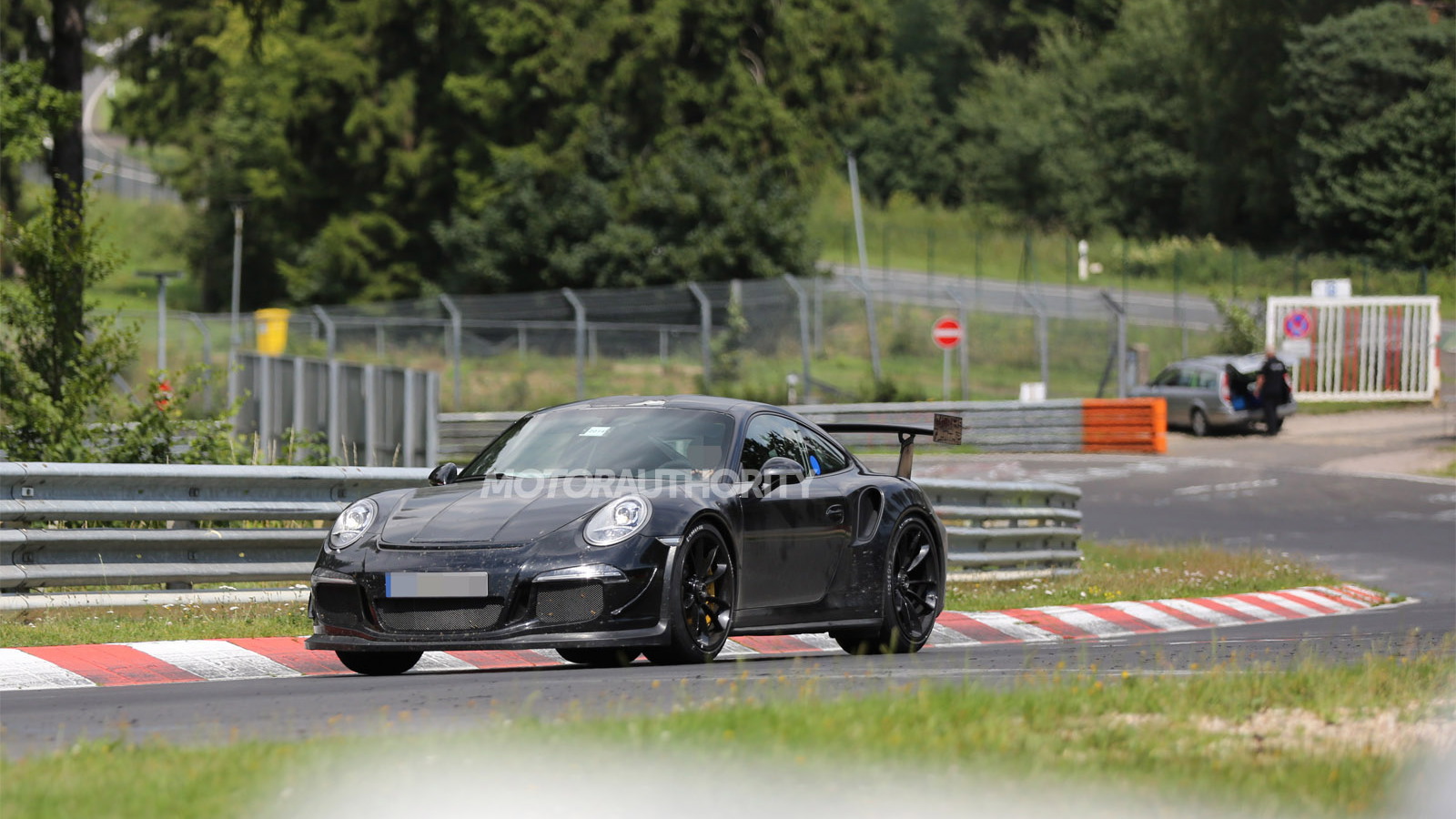 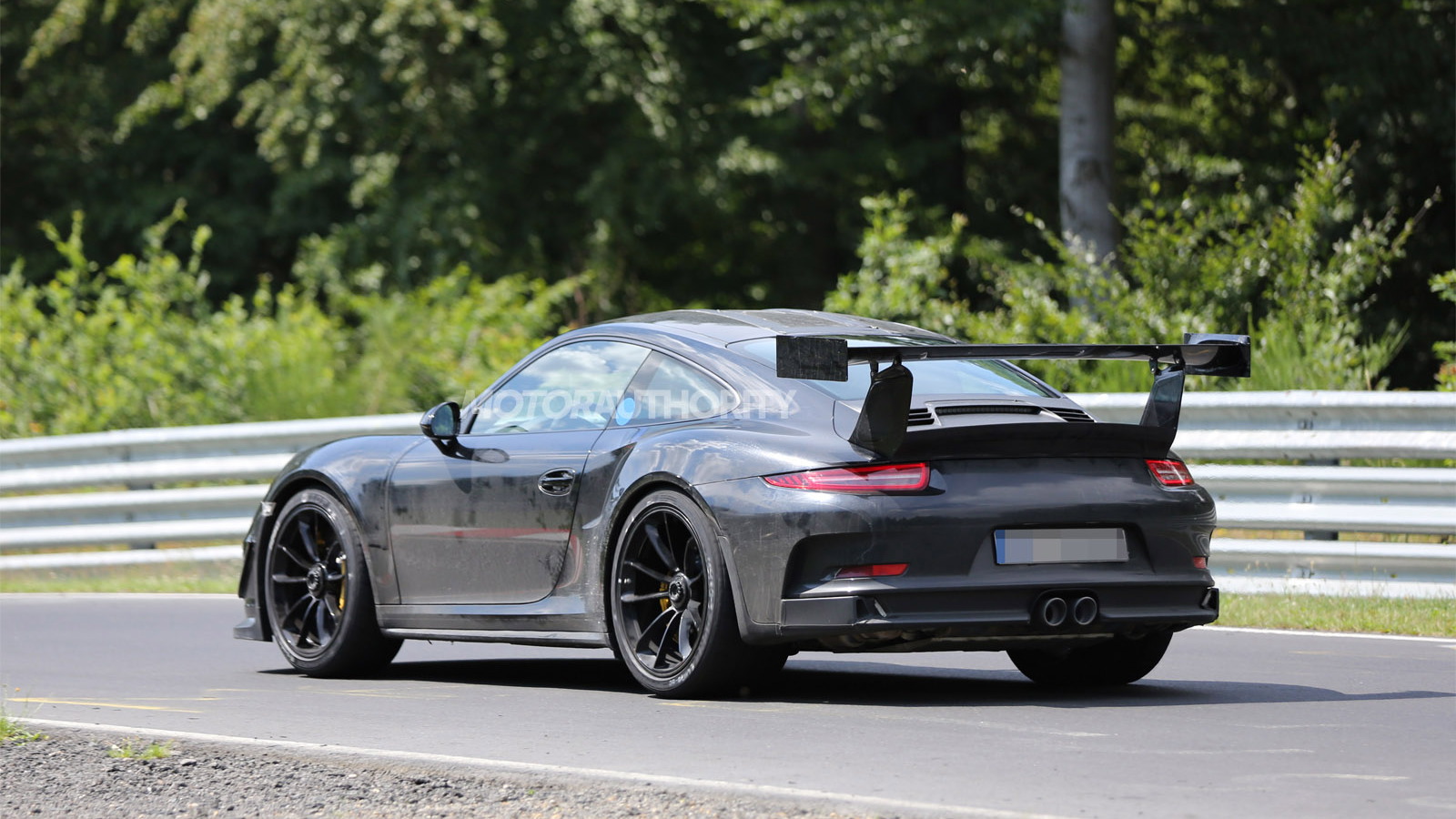 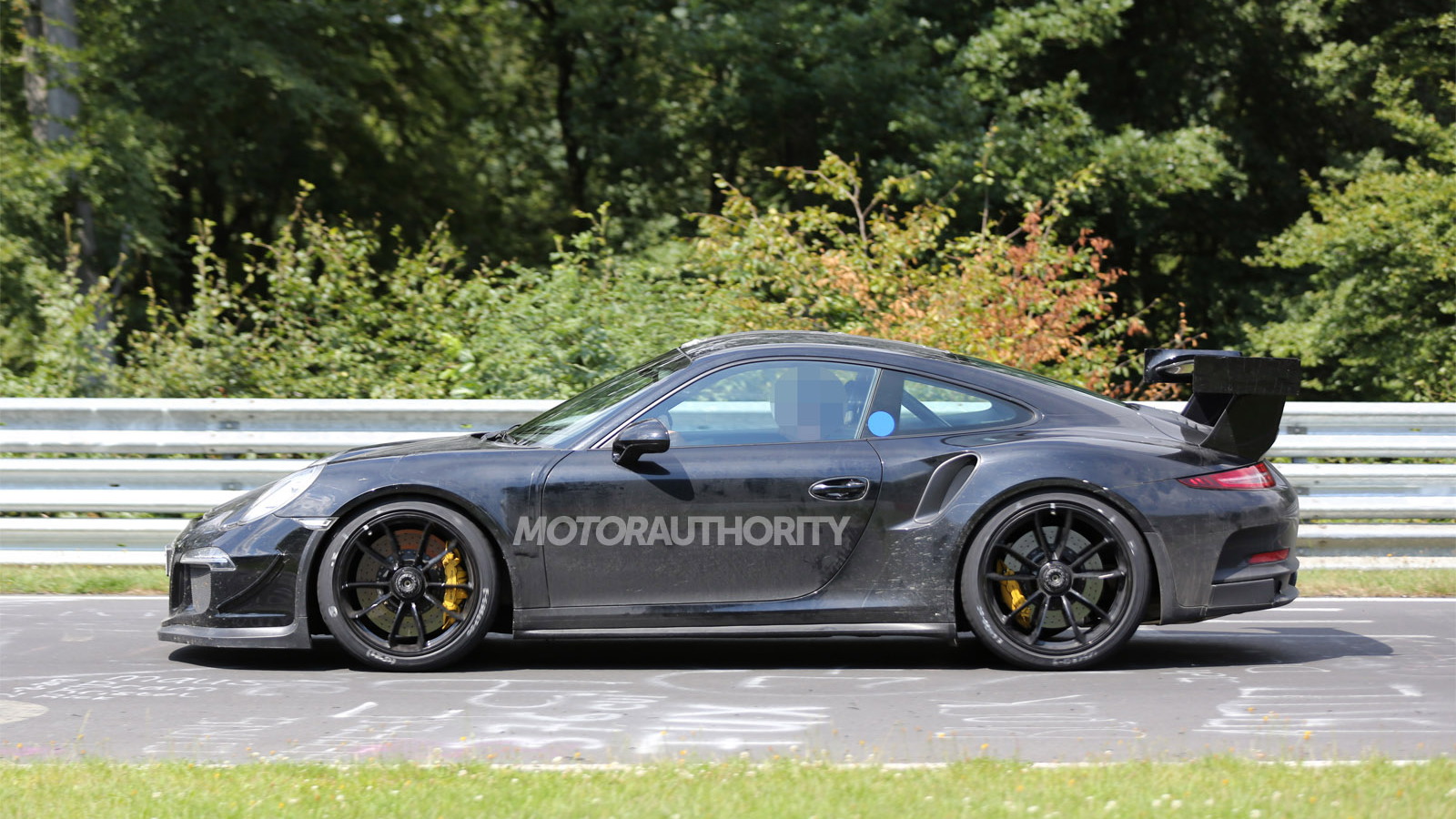 35
photos
Porsche is in the final stages of development of a more hardcore version of its track-focused 911 GT3, the infamous 911 GT3 RS. The latest spy shots reveal as much of the car as ever, as Porsche hasn't bothered to do much in the way of camouflage on this track-focused screamer.

The car was originally scheduled to debut this summer, but its arrival may be pushed back slightly because of Porsche’s 911 GT3 engine fire dilemma. Although a fix has been found, Porsche will likely be conducting further tests on the upcoming 911 GT3 RS variant to ensure its engine is as close to bulletproof as possible.

These are the latest spy shots of a prototype for the new GT3 RS, taken while it was conducting some high-speed tests on Germany’s Nürburgring. Spied largely undisguised, the new GT3 RS looks sinister in its all-back exterior, its aggressive aerodynamics and large fixed rear wing making it clear this 911's about business first--and that business happens at the track.

Visual differences from the standard GT3 include a slightly widened track to accommodate wider wheels and tires, a larger lip around the front spoiler, modified rear fender and bumper air extraction paths, and, of course, the much larger rear wing. The side intakes show Porsche is using the extra-wide body of its latest 911 Turbo for the new GT3 RS. It’s not clear if these will remain on the production version.

Expectations for the new GT3 RS include weight reduction, extra power and responsiveness, and an even more focused chassis tune. The current GT3 weighs just 3,152 pounds--relatively svelte for a modern car of its footprint and capability--so the GT3 RS is likely to be at or just under the 3,100-pound mark if Porsche's engineers can shave more weight through use of more carbon fiber panels, a synthetic rear window, and a somewhat more spartan cabin.

A shorter final drive ratio could bring the GT3 RS's gearing into more track-suited ranges (though it will also lower the top speed slightly). The GT3's 475-horsepower 3.8-liter may grow more powerful, as well, though it may be tuned for greater responsiveness instead, perhaps through use of lighter internal components and/or a lightened flywheel.

It's not yet known if Porsche may offer a manual gearbox in the GT3 RS. The standard GT3 doesn't offer one, though rumors persist that it may at some point come with an optional three-pedal setup. The PDK gearbox in the GT3 seems like a natural fit for Porsche's most high-tech track machine.

Performance figures for the new GT3 RS should slip just under the 3.3-second mark for the 0-60 mph sprint, and just over the 195-mph top-speed mark to optimize Nürburgring lap times--a key bragging right.

Stay tuned for a reveal later this year. Beyond the GT3 and GT3 RS, Porsche still has two more super-911 possibilities: the GT2 and GT2 RS, although it’s not clear if they’re still part of the plan because of potential competition with Porsche’s rumored mid-engine McLaren 12C and Ferrari 458 rival.