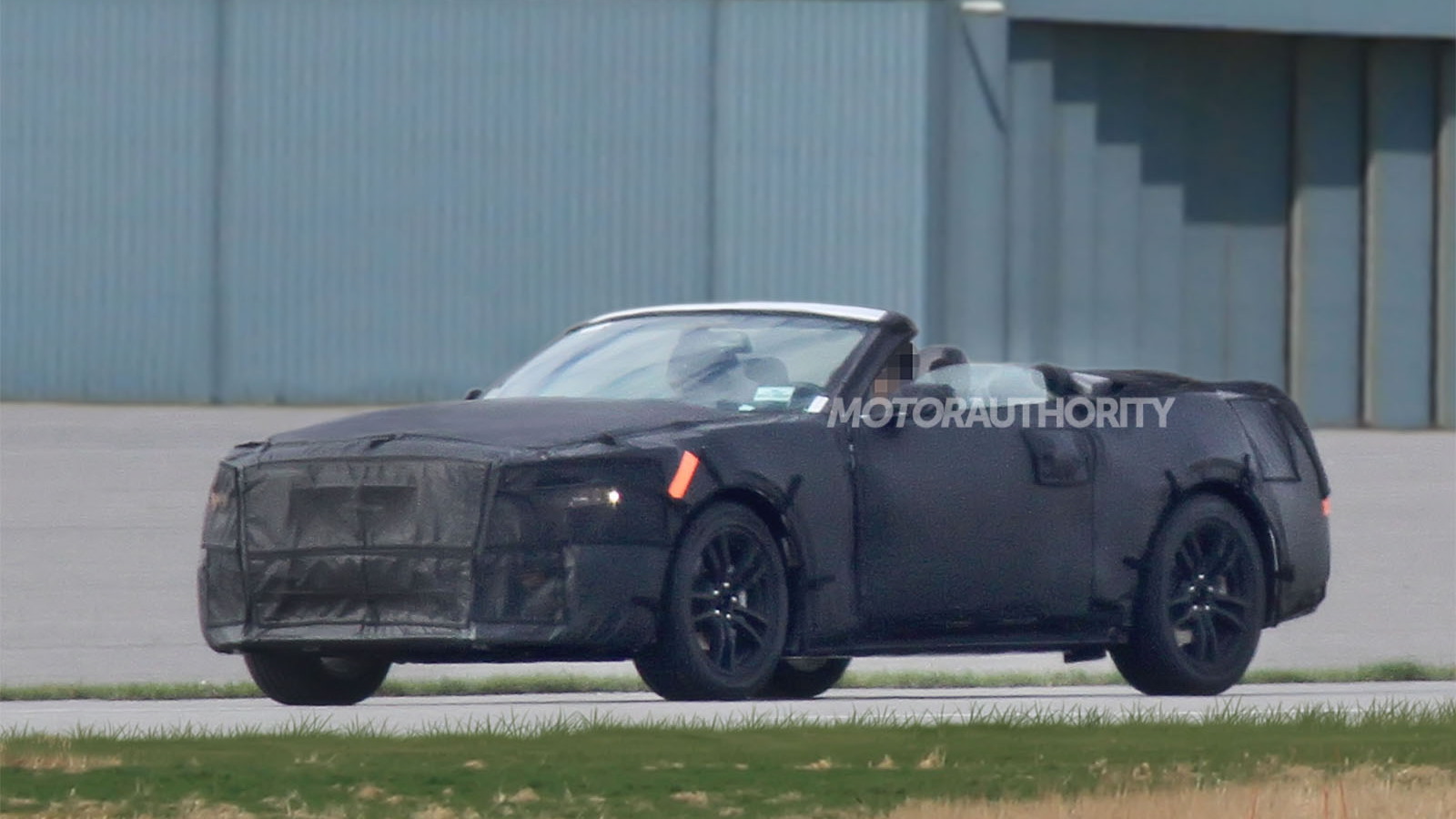 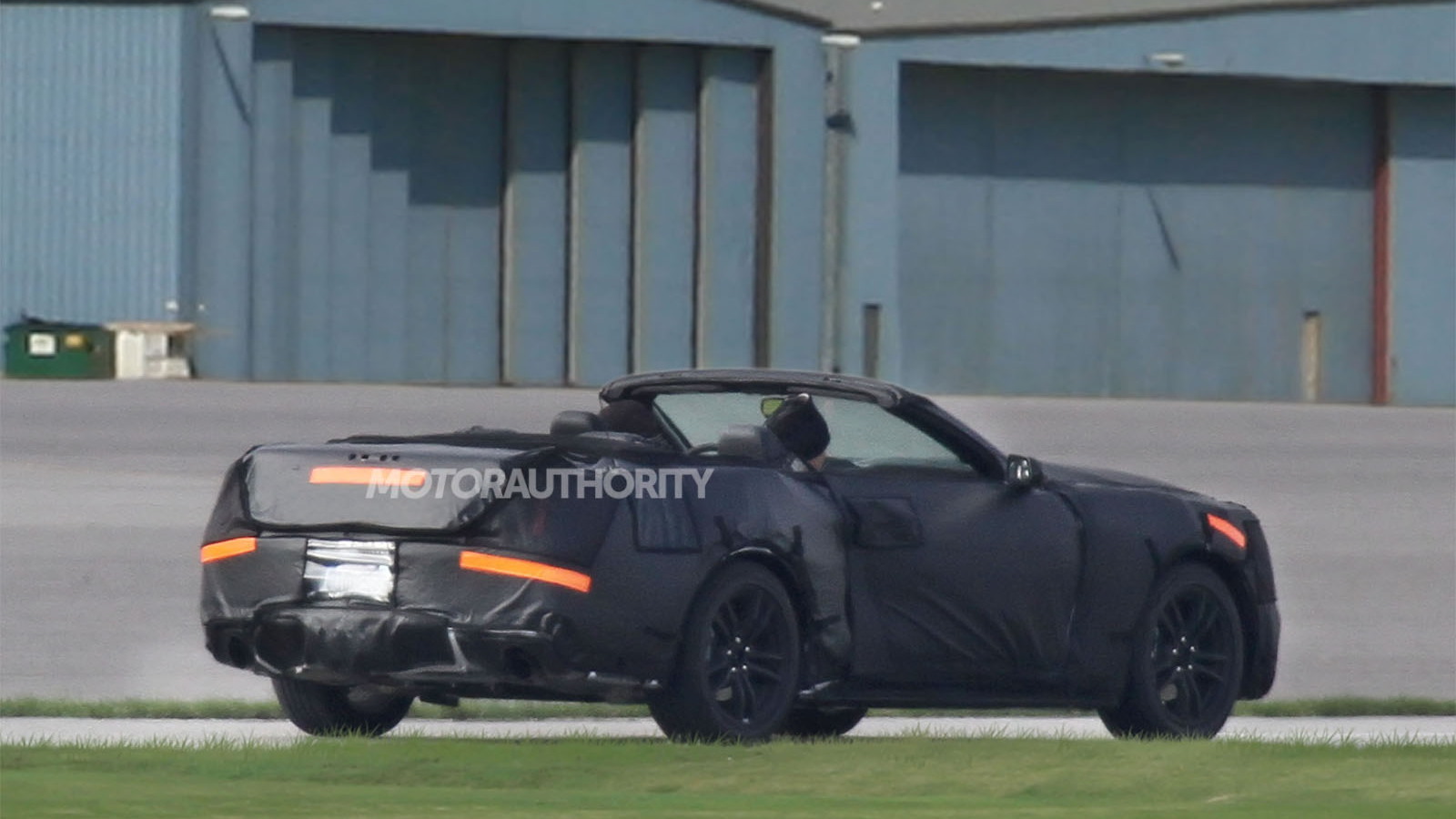 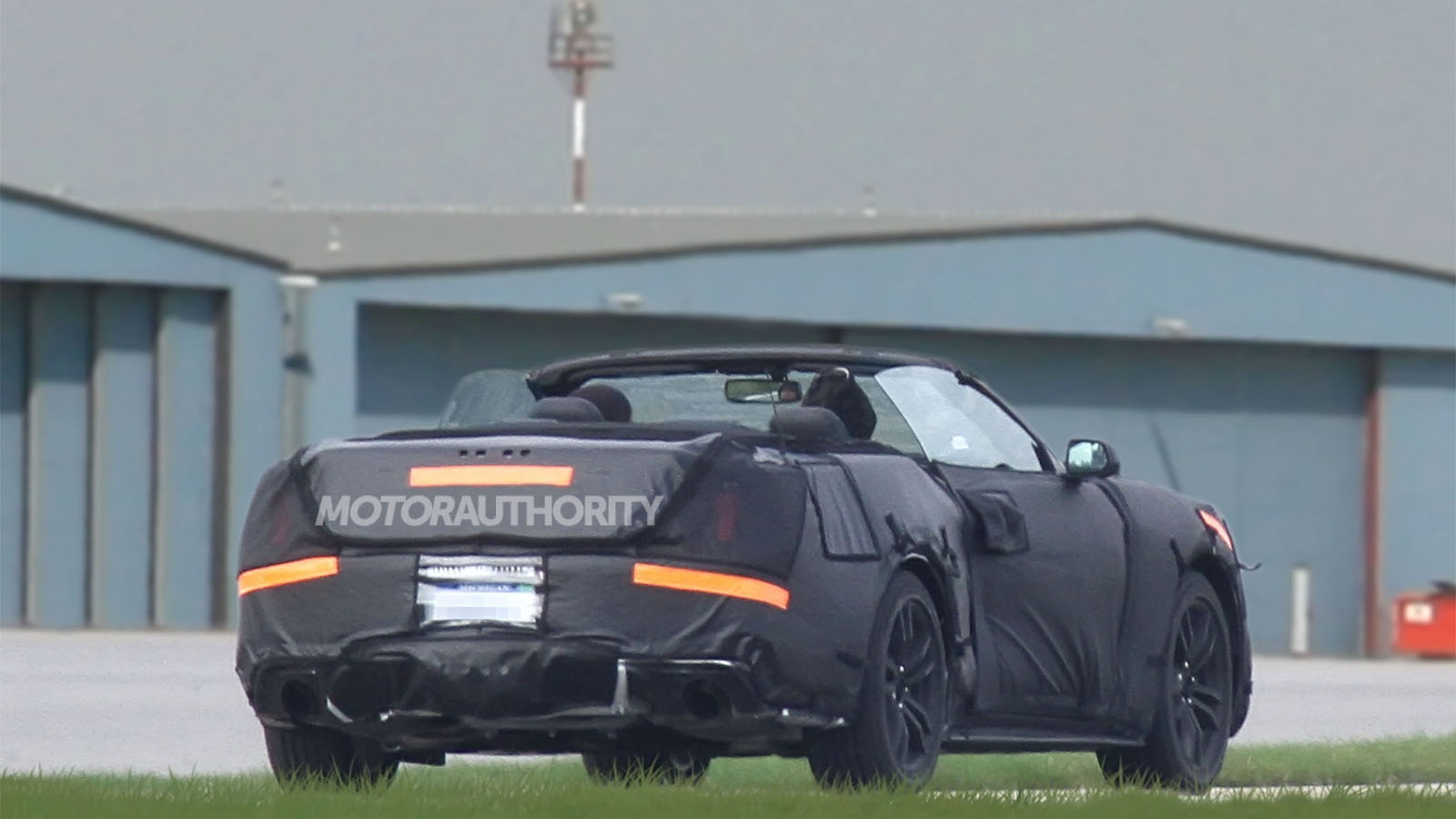 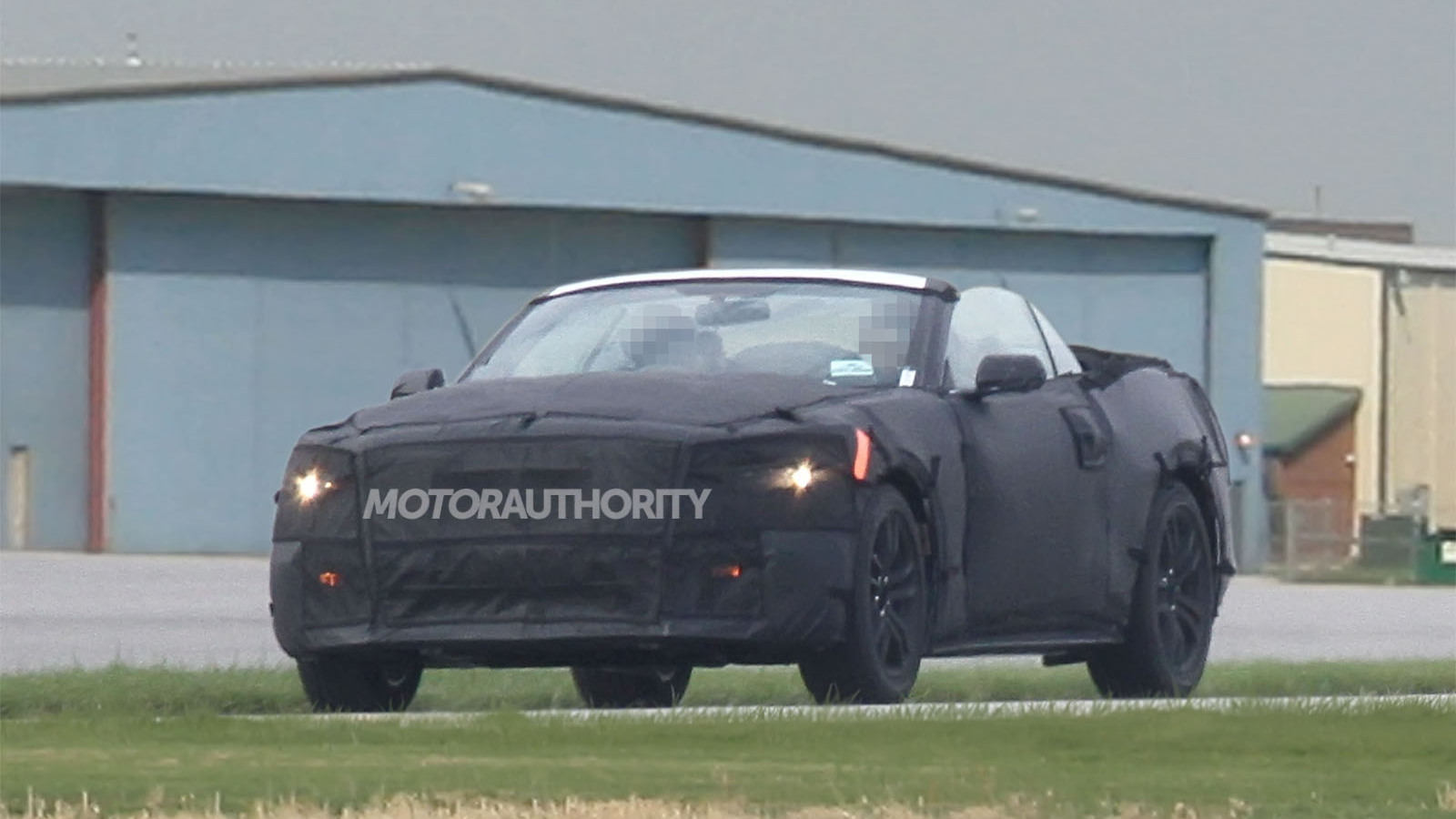 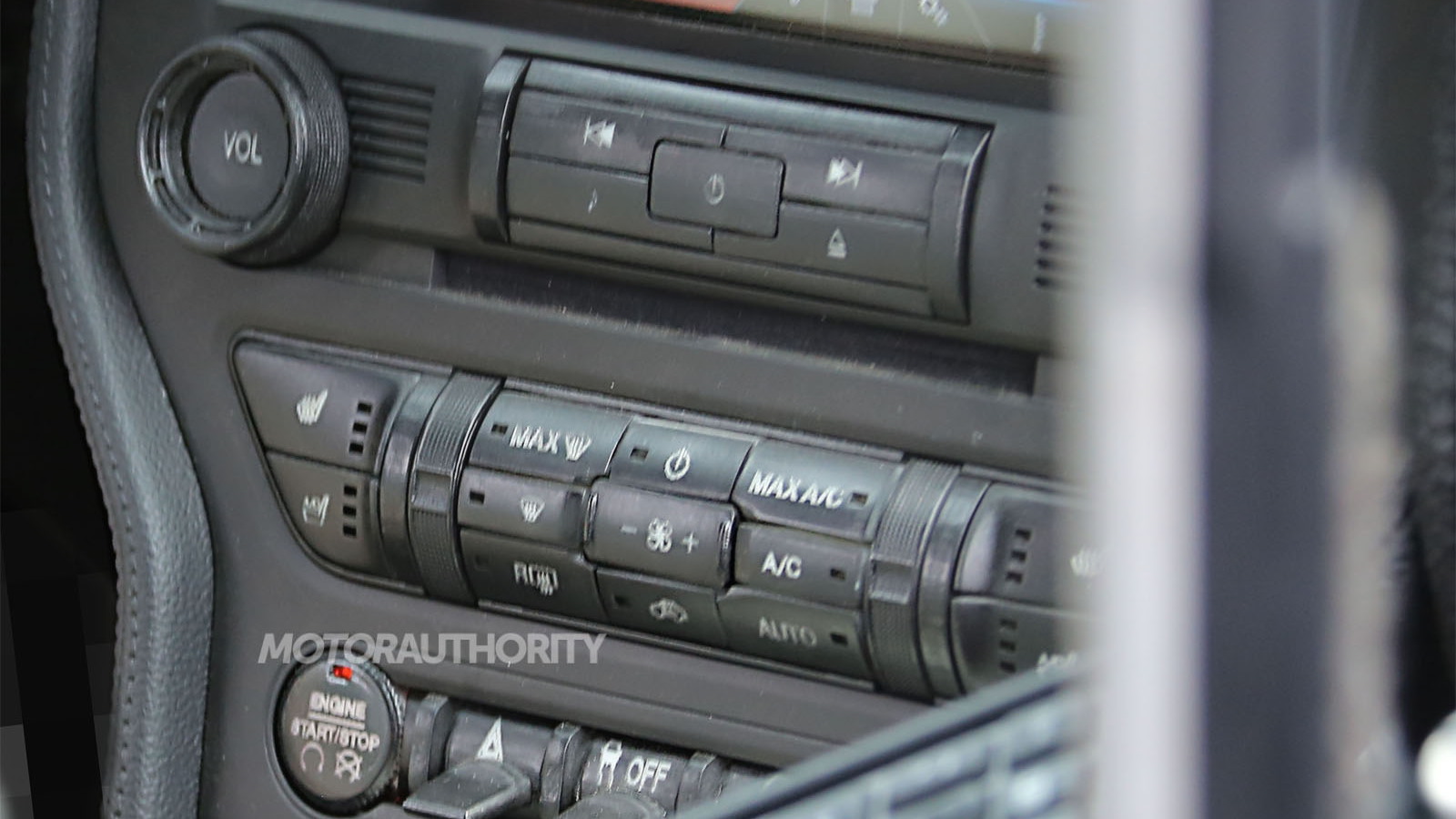 16
photos
The sixth generation of the Ford Mustang is almost here, and soon, it will be followed by its convertible counterpart. These are our first spy shots of the upcoming drop-top, and they look just like you'd expect. Thanks to the top-down nature of the convertible, however, they also include our best looks yet at the interior of the upcoming 2015 Mustang.

While the heavy camouflage obscures the outside of the convertible much more than our previous shots of the coupe, it's still clear that the same proportions are in place, with a lower, more Fusion-like nose and familiar Mustang profile.

The folding roof appears to be a simple cloth unit, tucking neatly behind the rear seats when not in use. When up, we get a small glimpse of its profile, which largely preserves the coupe's lines.

It's the front seat of the cabin where the Convertible's spy shots get most interesting, and most detailed. Using a steering wheel with a familiar deep dish angle and fairly standard steering-wheel-mounted controls, the Mustang cockpit appears to have been updated for a high-res touchscreen infotainment system, a more modern and modular center stack shape, and an entirely new button/switch configuration.

Push-button start will also be a factory option, as shown in the detail shots of the interior. The button is mounted on the left side of the center stack, beside a row of toggle switches for hazard lights and traction control.

As for powertrains, the 2015 Ford Mustang Convertible should share its options with the coupe, from the base V-6 engine rated at about 305 horsepower, to the 2.3-liter turbocharged four-cylinder rated at about 310 horsepower, up to the 5.0-liter V-8 good for 420 horsepower. A recent leaked document supports these figures for the next-gen Mustang.

We expect the 2015 Ford Mustang to make its debut in December, followed by a public unveiling at the 2014 Detroit Auto Show in January. It's not yet clear if Ford will show both the coupe and convertible at the same time, or if it will delay the convertible by a few months.