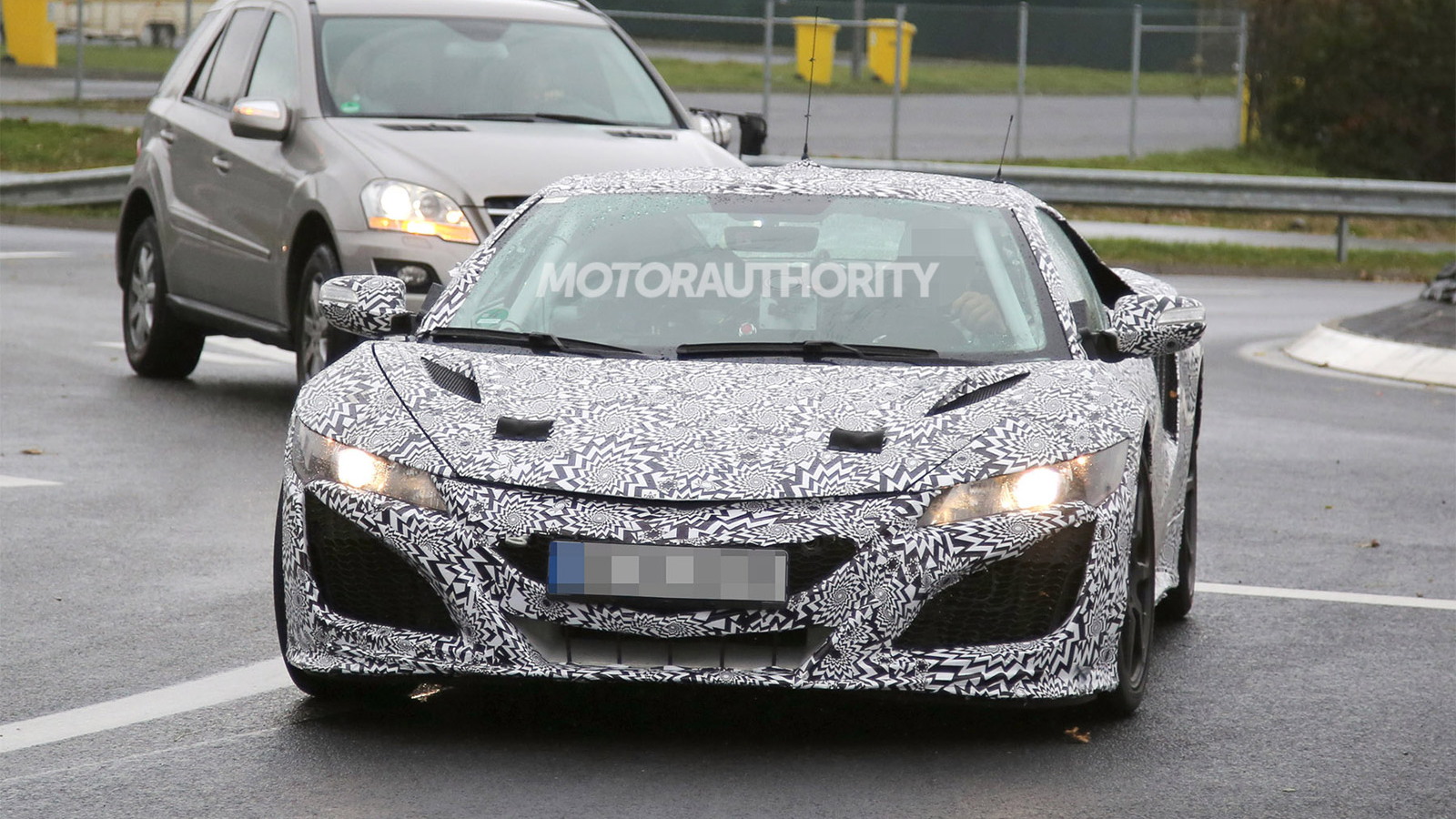 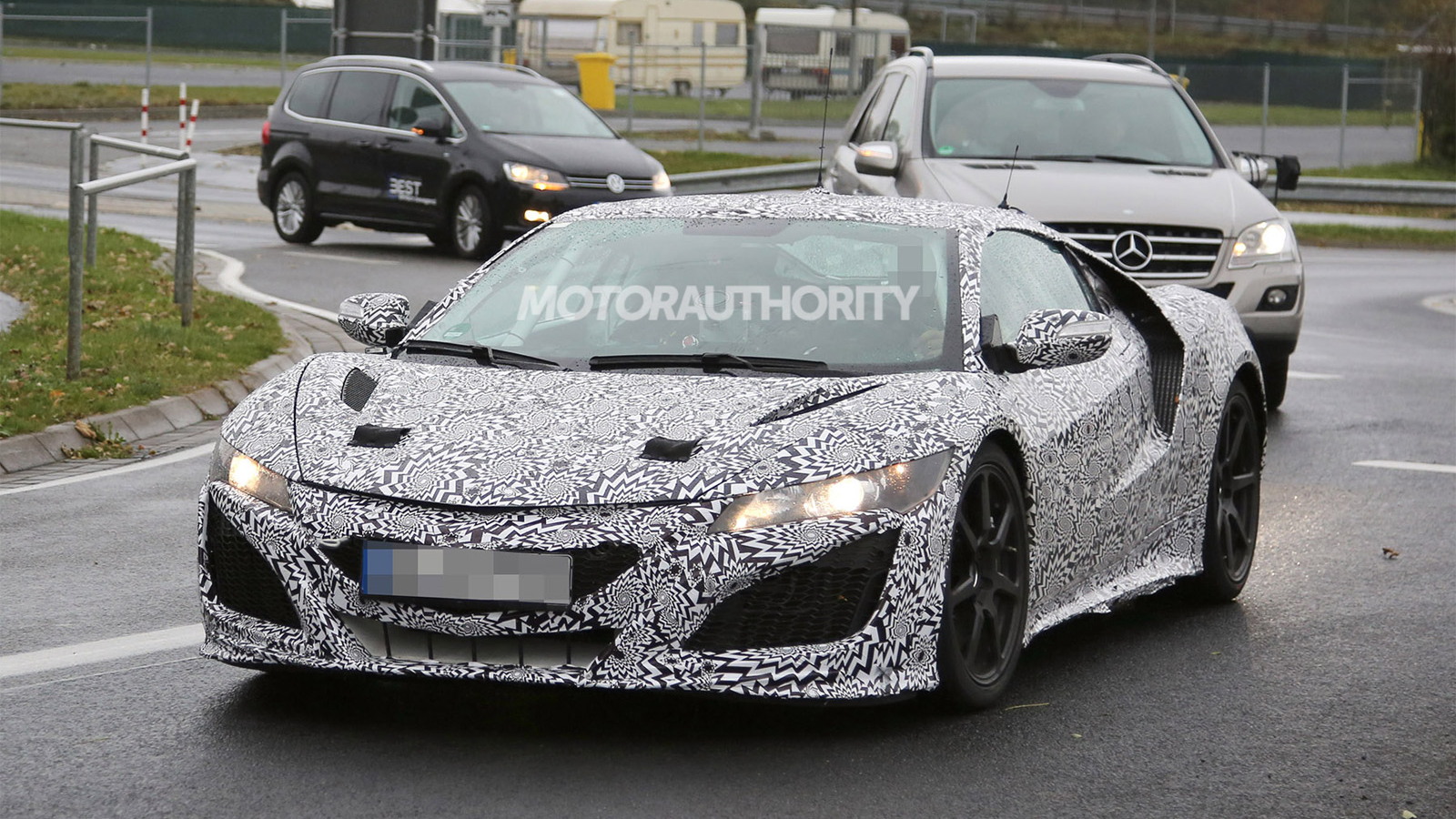 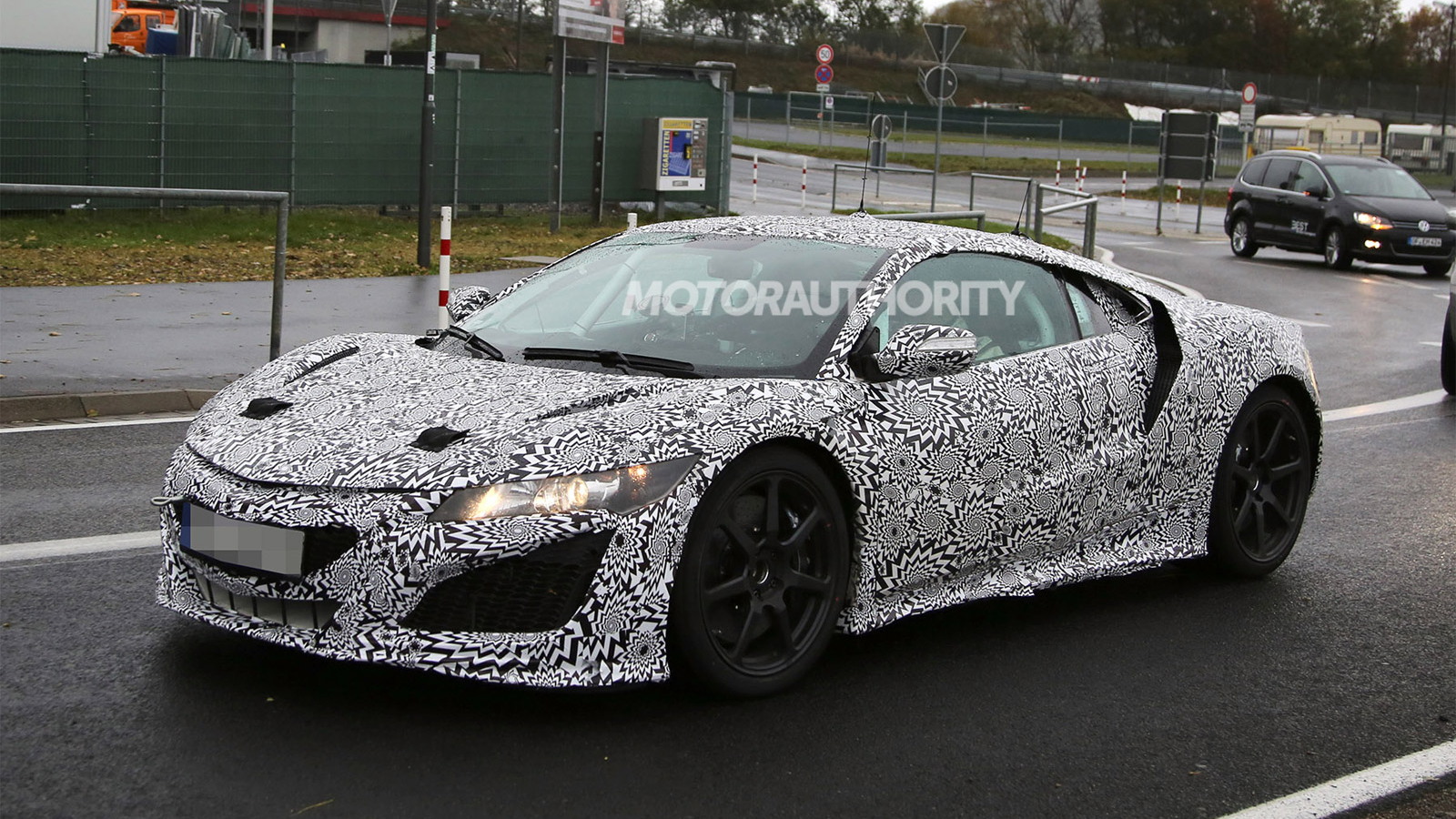 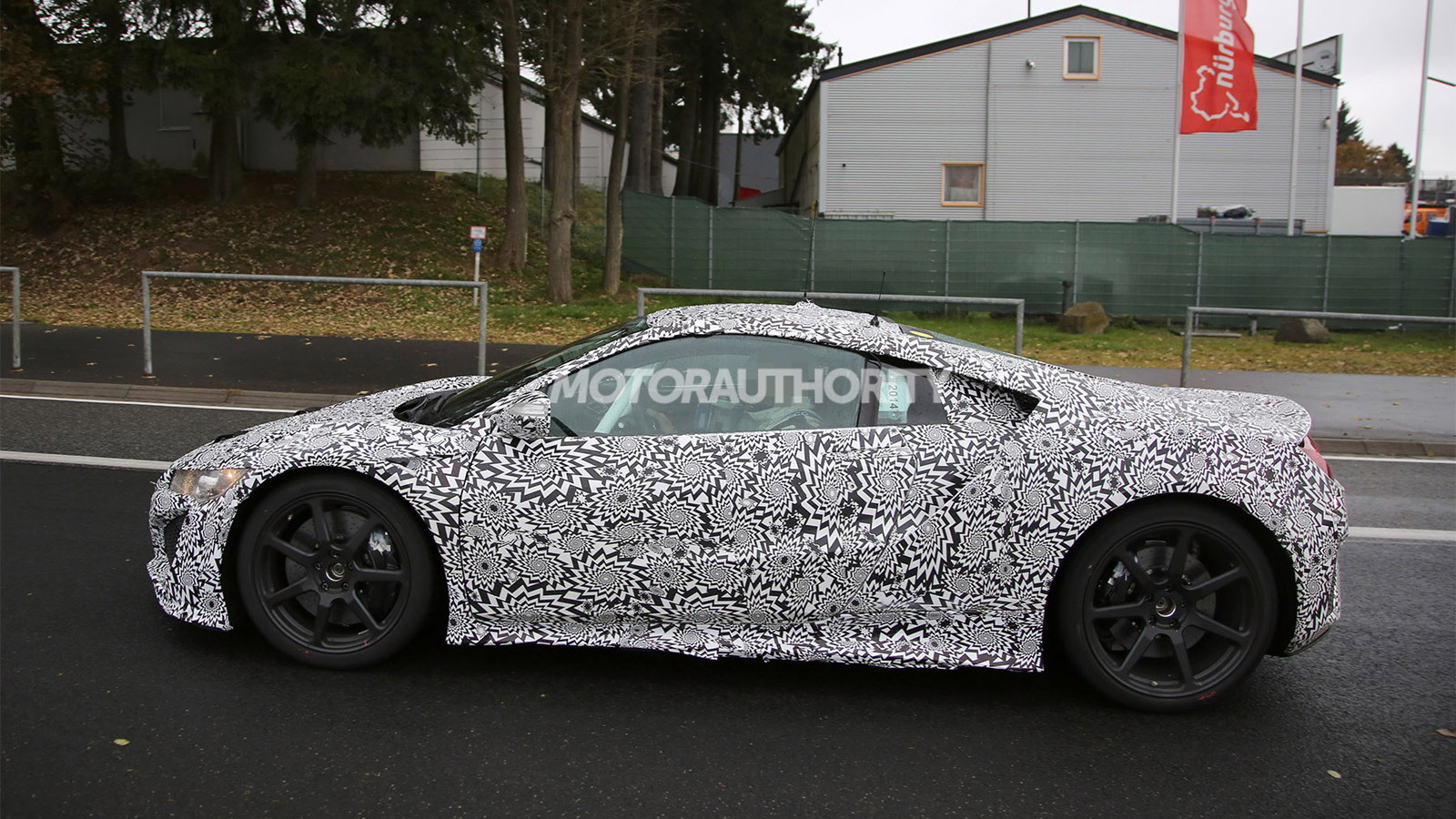 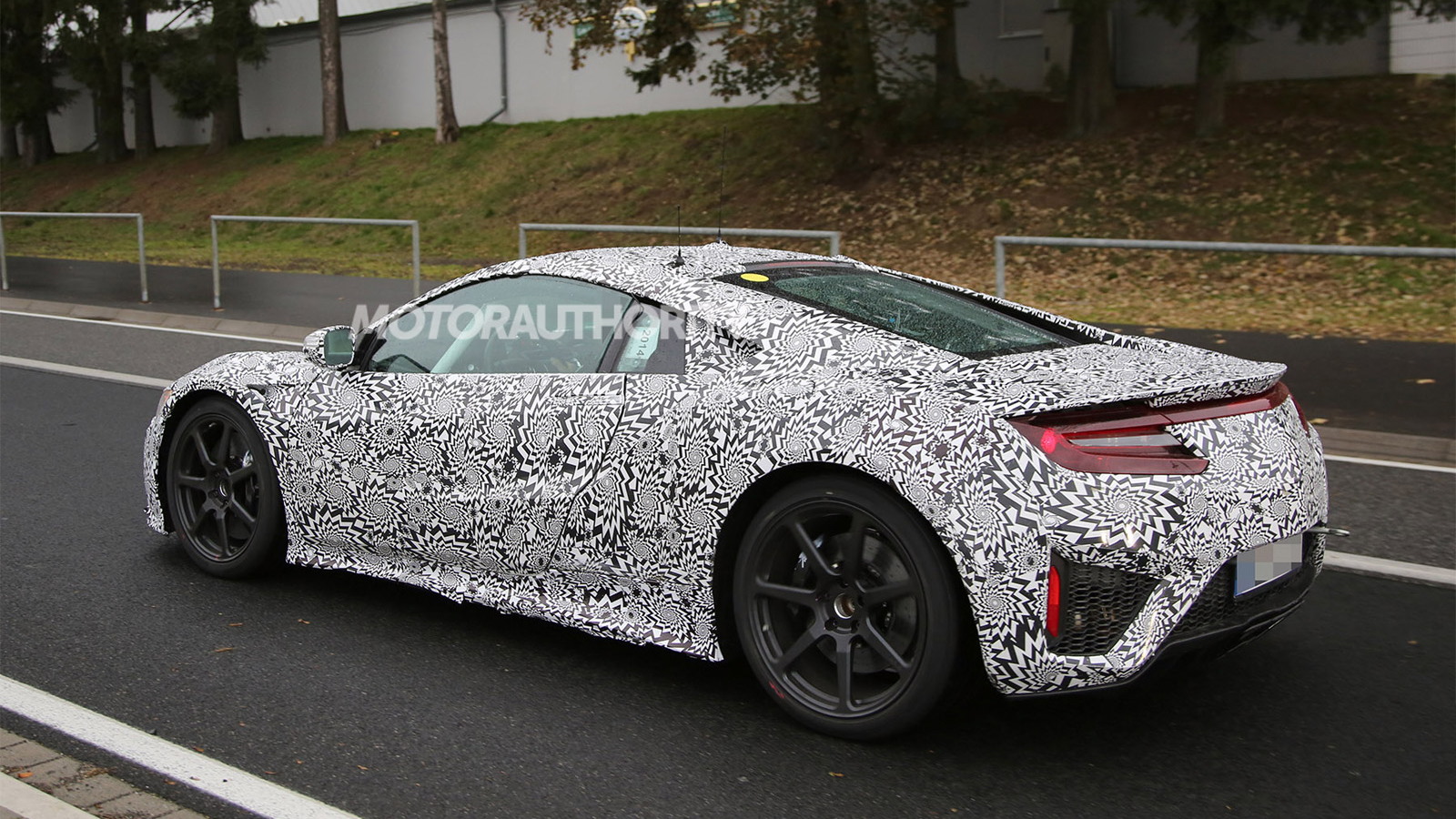 46
photos
Concept versions of Acura’s second-generation NSX supercar have been hitting the auto show scene since early 2012 but now we have new spy shots of the production version that will be hitting showrooms next year, most likely as a 2016 model. This is still a prototype but it differs to previous prototypes of the car and is almost certainly wearing the design we’ll see on the final product.

Acura engineers are extensively testing the car at the Nürburgring and on the German race track's surrounding roads. The latest shots show that the new NSX has received additional cooling apertures on its hood, and the intakes at the front and sides of the car have also been enlarged. You may recall that an earlier prototype burned to the ground, possibly from overheating.

Under the skin, Acura has fitted its new NSX with a longitudinally-mounted V-6 in a mid-engine position, as opposed to the transverse layout originally planned and similar to that used in the first-generation NSX. Acura says the switch was only made recently, with the reason being it would aid handling and packaging. Construction will be mostly aluminum although some exotic materials may also be utilized. 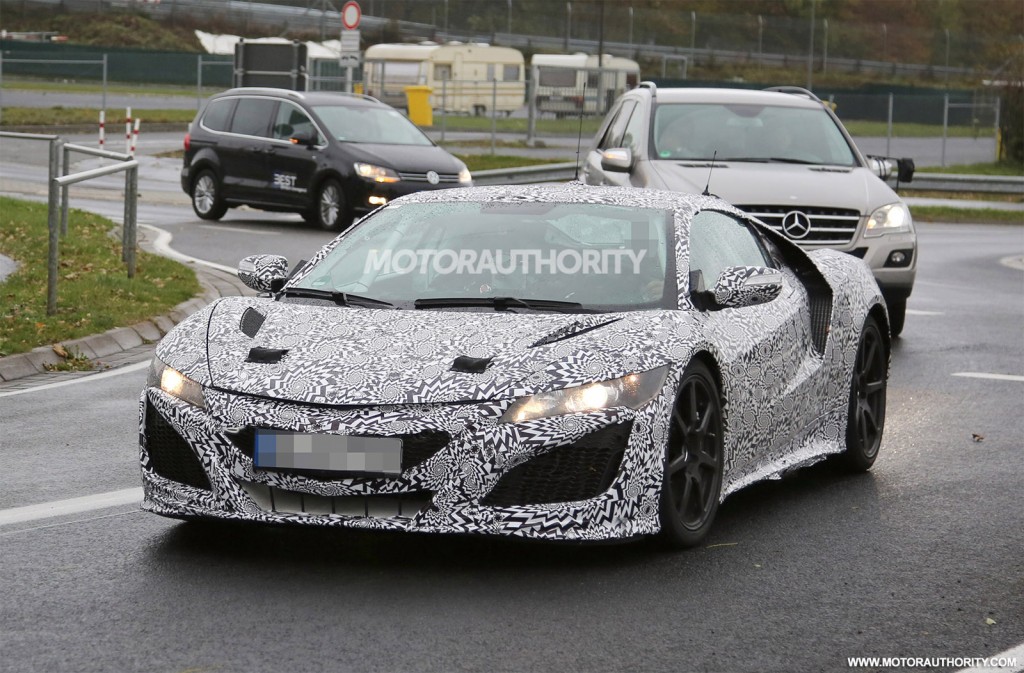 Another significant change to the original specification is the addition of a twin-turbocharging system, which has likely necessitated the additional cooling requirements. It is also possible that the engine’s displacement has been increased to 3.7 liters, up from 3.5 liters originally. Direct fuel injection will remain, as will a complex hybrid setup consisting of three electric motors.

Yes, what will set the new NSX apart from its rivals will be a performance-oriented hybrid system. Acura calls it the Sport Hybrid Super-Handling All-Wheel-Drive system (Sport Hybrid SH-AWD) and the first iteration of it appeared in the 2014 RLX Sport Hybrid SH-AWD sedan. In the new NSX, two electric motors will power the front wheels independently, while a third, integrated with the V-6, will help power the rear wheels. The gearbox will be a dual-clutch unit with “more than six” forward gears.

Powering the three electric motors will be a lithium-ion battery, topped up with regenerative braking. A bilateral torque control system will be able to instantly generate negative or positive torque at the wheels during cornering to aid handling and provide what Acura describes as an “on-the-rails-cornering” experience. 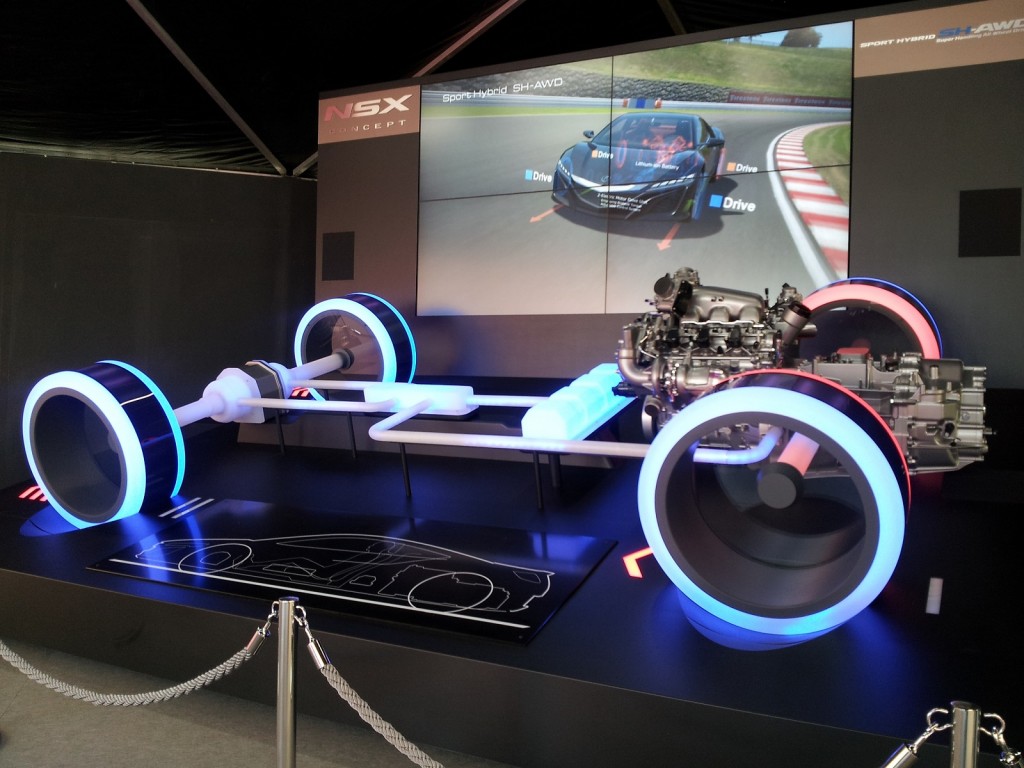 Acura hasn't revealed the car's weight, power, or other specifications, but does state, "While most supercars opt for brute force delivered from a large engine, the NSX concept champions the true racing philosophy of an extremely favorable power-to-weight ratio.”

A direct-injected and twin-turbocharged 3.7-liter V-6 aided by a trio of electric motors could see the new NSX’s horsepower figures reach genuine supercar territory. With Nissan’s GT-R now packing 600 horsepower in NISMO trim, a similar output for the new NSX is entirely possible.

Development of the new NSX is taking place primarily in the U.S. and production of the car will also be handled here, at Honda’s Performance Manufacturing Center located in Marysville, Ohio to be exact. The car will be badged an Acura for the U.S. and Chinese markets, and a Honda everywhere else.

Look for a debut in early 2015 and sales to commence in late summer or fall of that year. Acura has previously hinted that a convertible version will also be launched, following at least two years after the coupe goes on sale. As for pricing, Acura is aiming within the range of the Audi R8, which for the 2015 model year starts at $115,900 for the R8 V8 model and tops out at $175,100 for the R8 V10 Spyder.