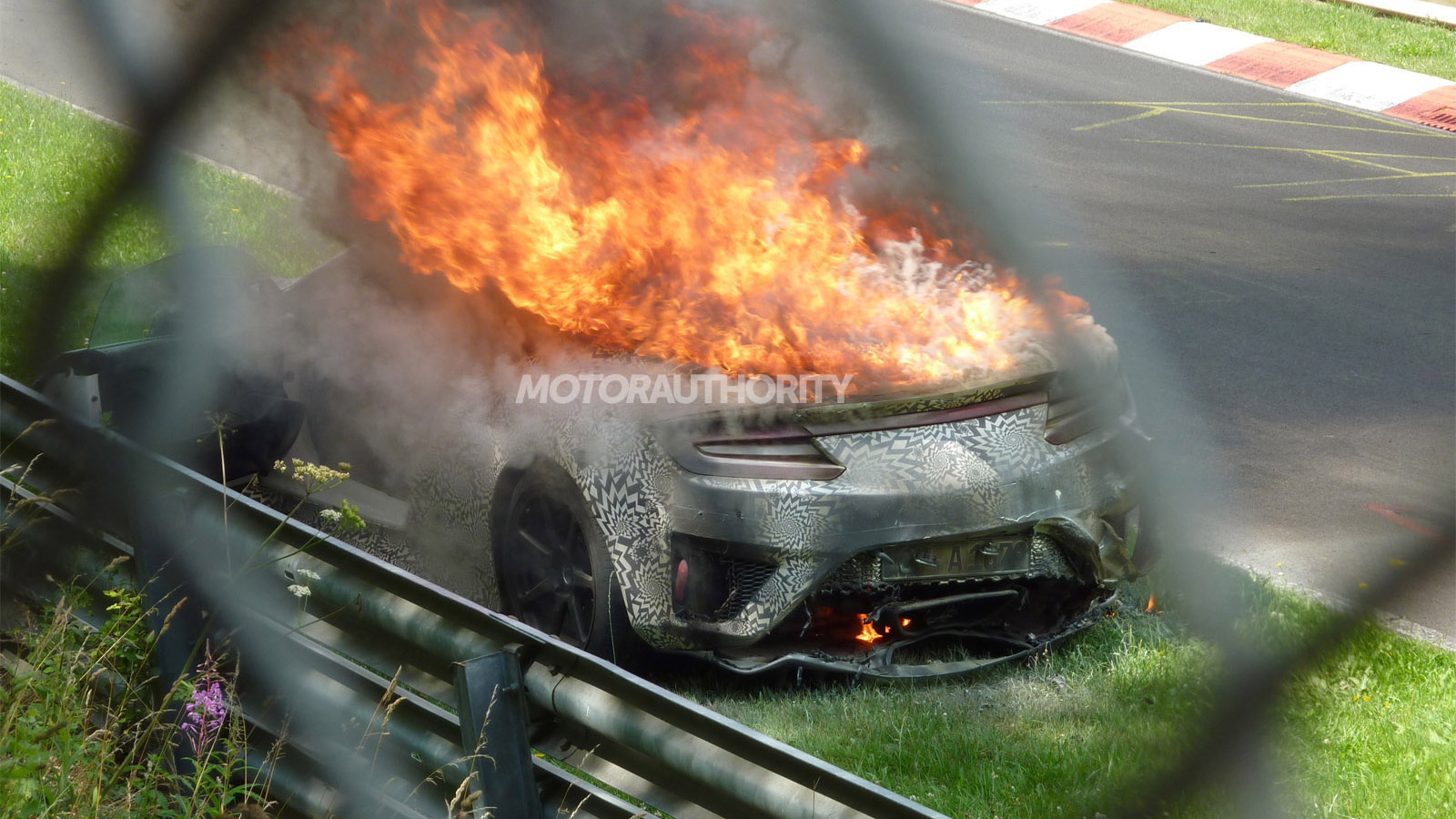 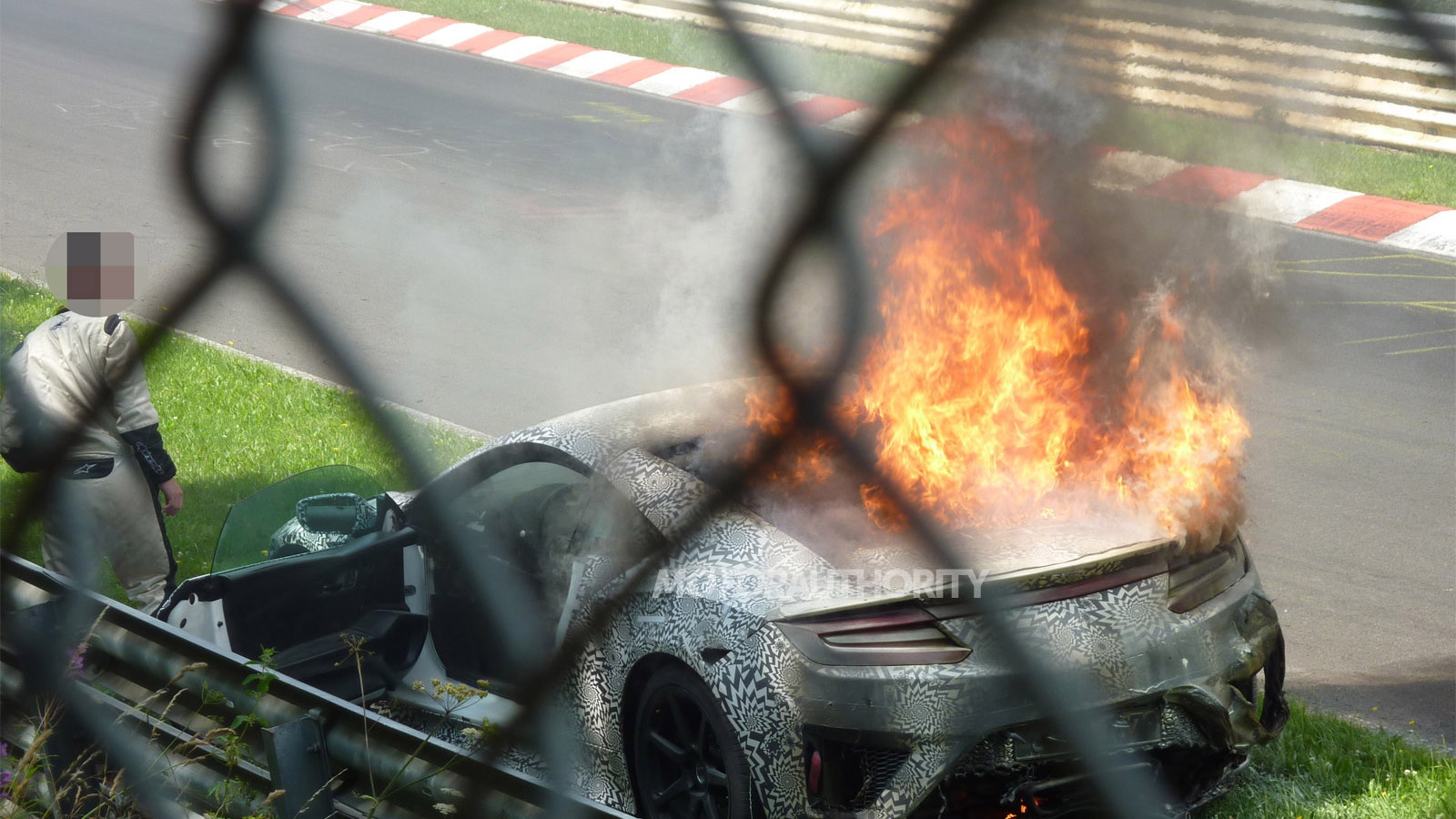 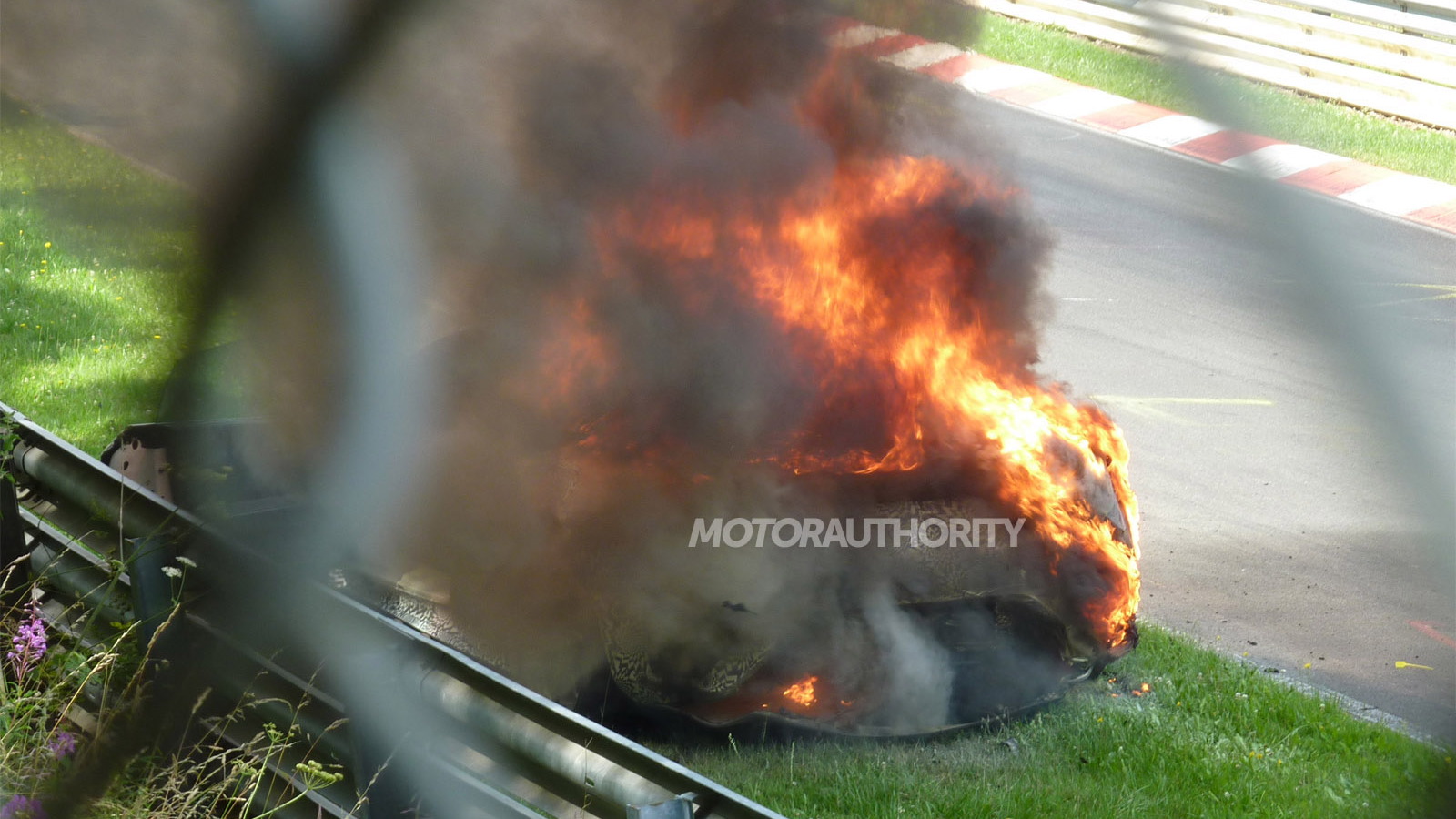 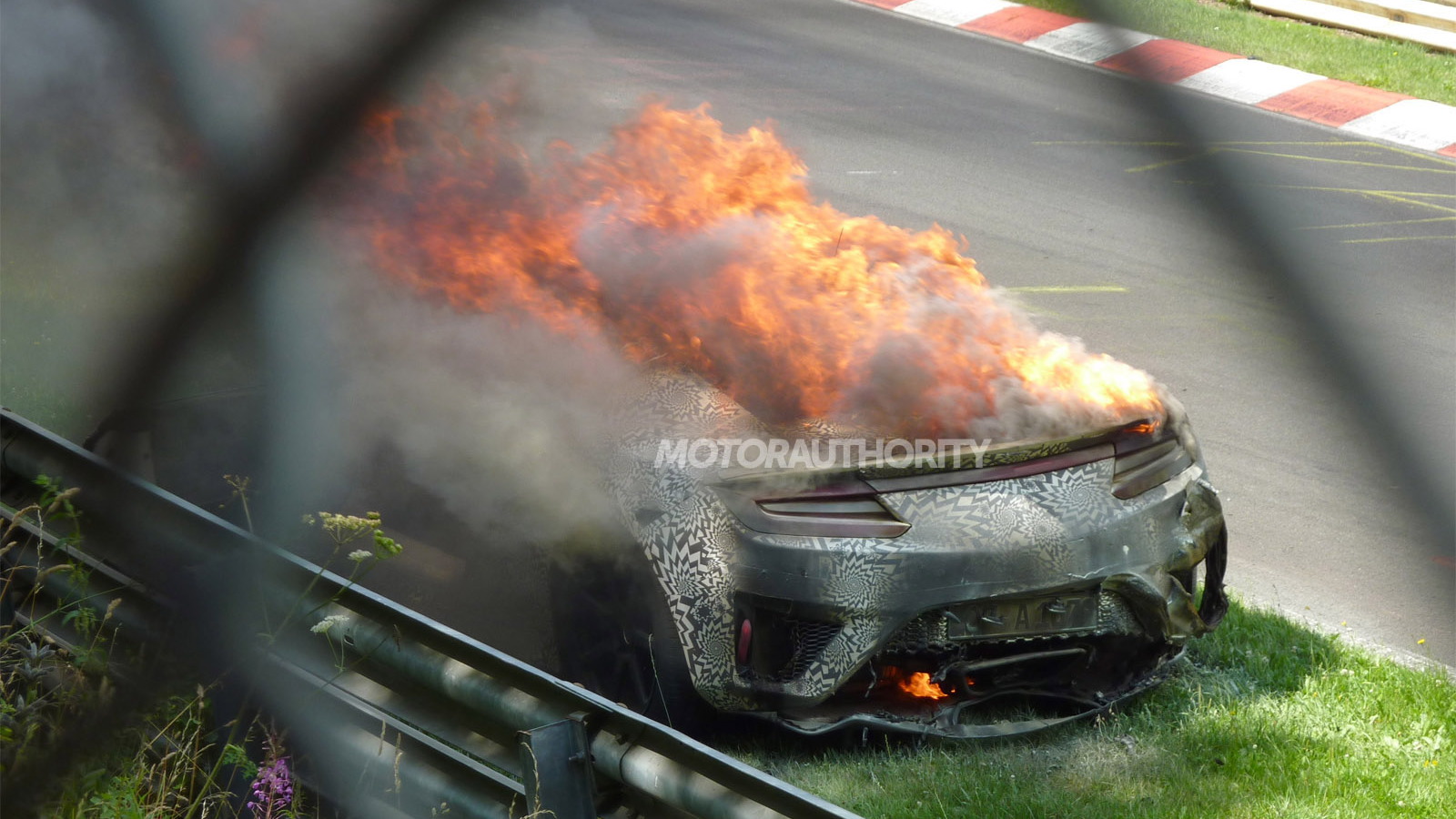 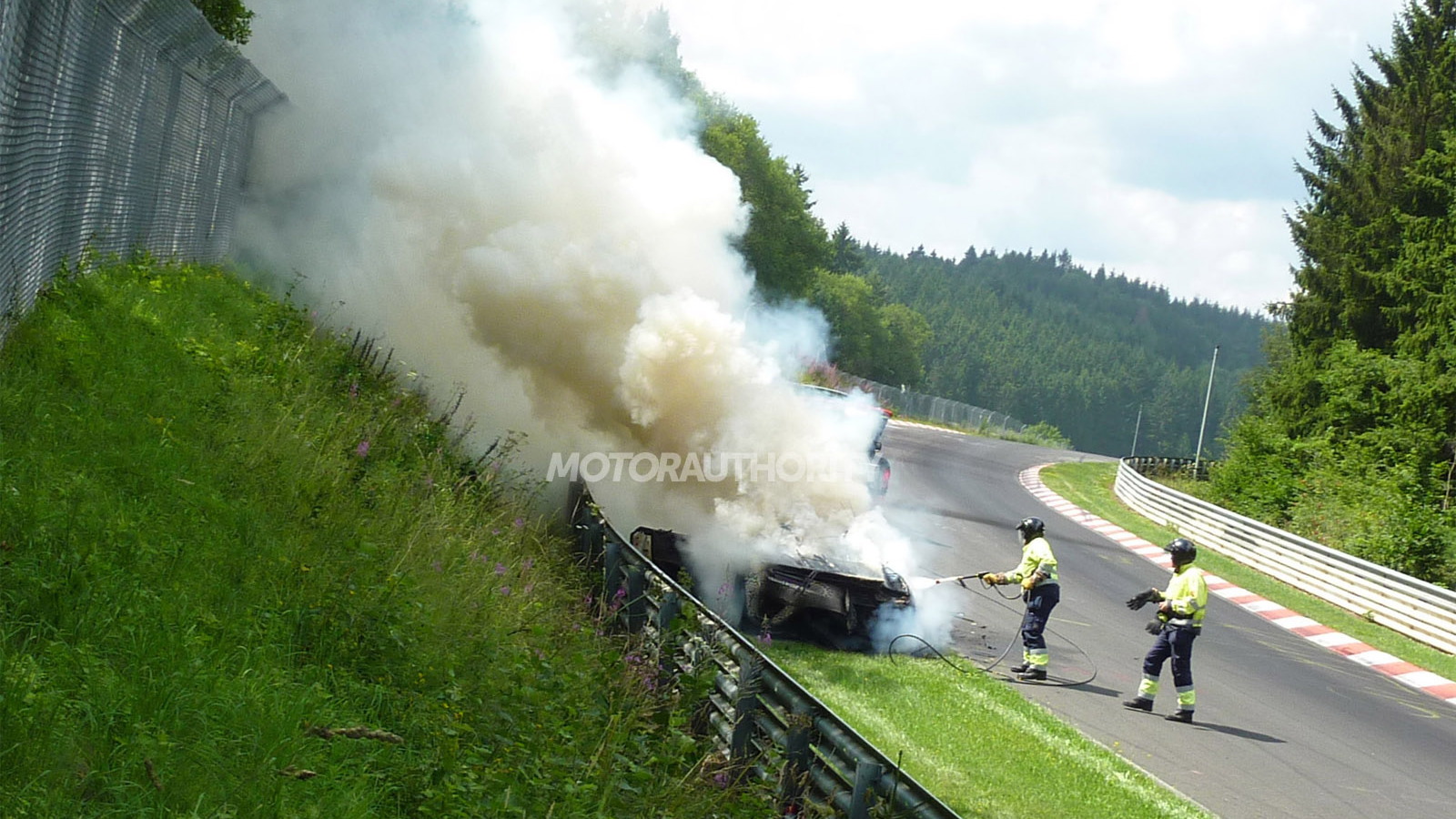 26
photos
A prototype for Acura’s second-generation NSX supercar only started testing at the Nürburgring yesterday, but already the car has been destroyed. The prototype caught fire during today's round of testing but fortunately the driver managed to pull over and jump out before the flames spread to the rest of the car. Onlookers said the fire started at the rear before engulfing the rest.

The latest photos show the car as it is burning, a roaring fire completely enveloping the rear compartment before safety crews arrive to put out the flames.

The rear is where the car’s twin-turbocharged engine is located as well as its gearbox and one of its three electric motors. It’s not clear what caused the fire but we do know the air intakes and vents on the latest prototype are larger than those on previous prototypes as well as the original concept from 2012, suggesting the design has required additional cooling.

Fortunately the fire occurred during testing, and we’re sure engineers will address the issue before production of the new NSX commences next year. As previously reported, the new NSX will be going on sale sometime in 2015, as a 2016 model. It will be badged an Acura for the American and Chinese markets and a Honda everywhere else. Development of the new NSX is taking place primarily in the U.S. and production will be handled at Honda’s Performance Manufacturing Center in Marysville, Ohio.

The drivetrain of the new NSX is a  complex hybrid system consisting of a V-6, dual-clutch transmission, lithium-ion battery and three electric motors. Two of the electric motors power the front wheels independently, while the third, integrated with the V-6 and dual-clutch transmission, helps power the rear wheels. The system is Acura’s new Sport Hybrid Super-Handling All-Wheel-Drive, and a tamer setup is featured in the 2014 RLX Sport Hybrid SH-AWD.

For our in-depth report on the 2016 Acura NSX, which includes spy shots of the prototype prior to its fire, click here.