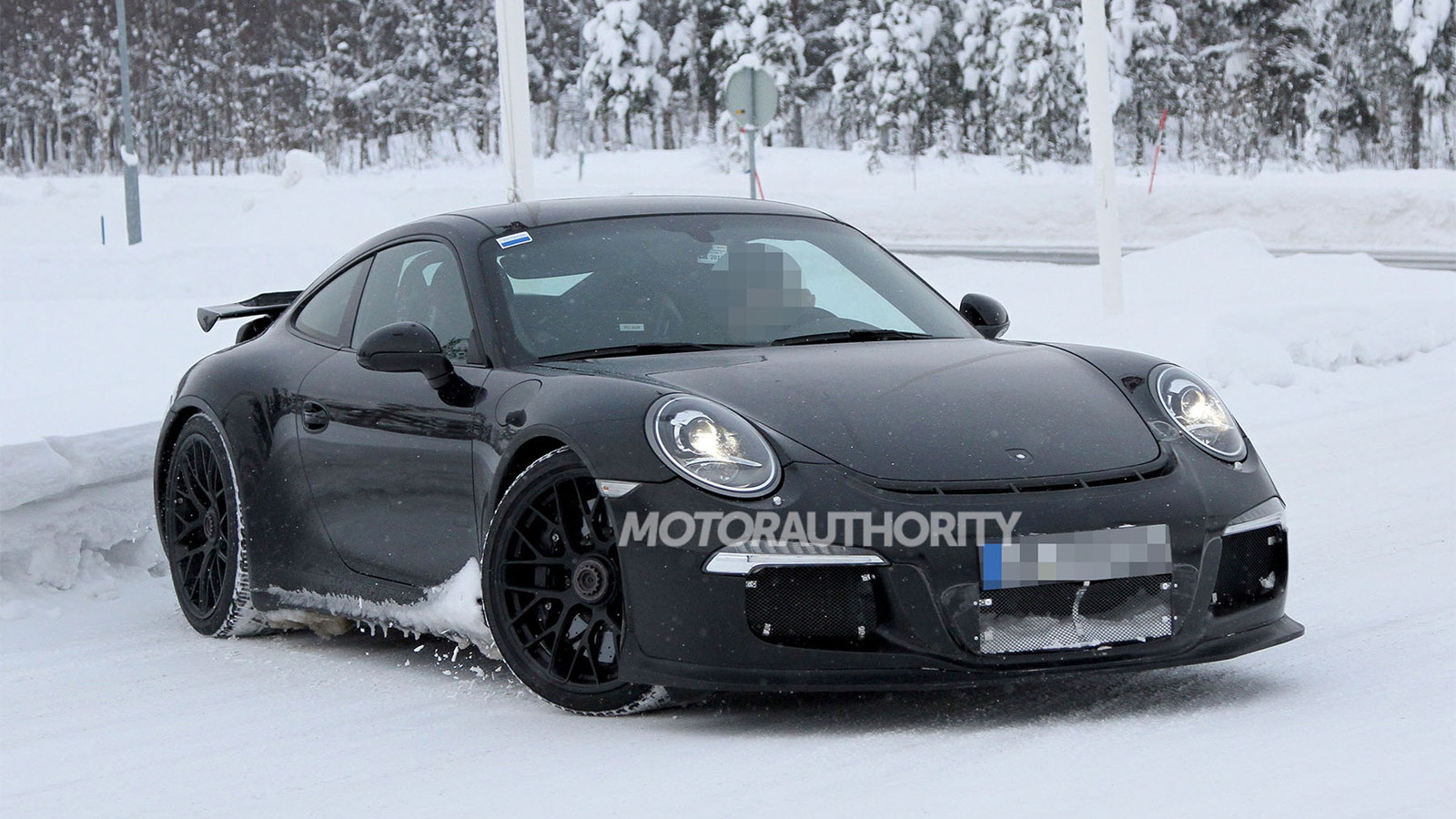 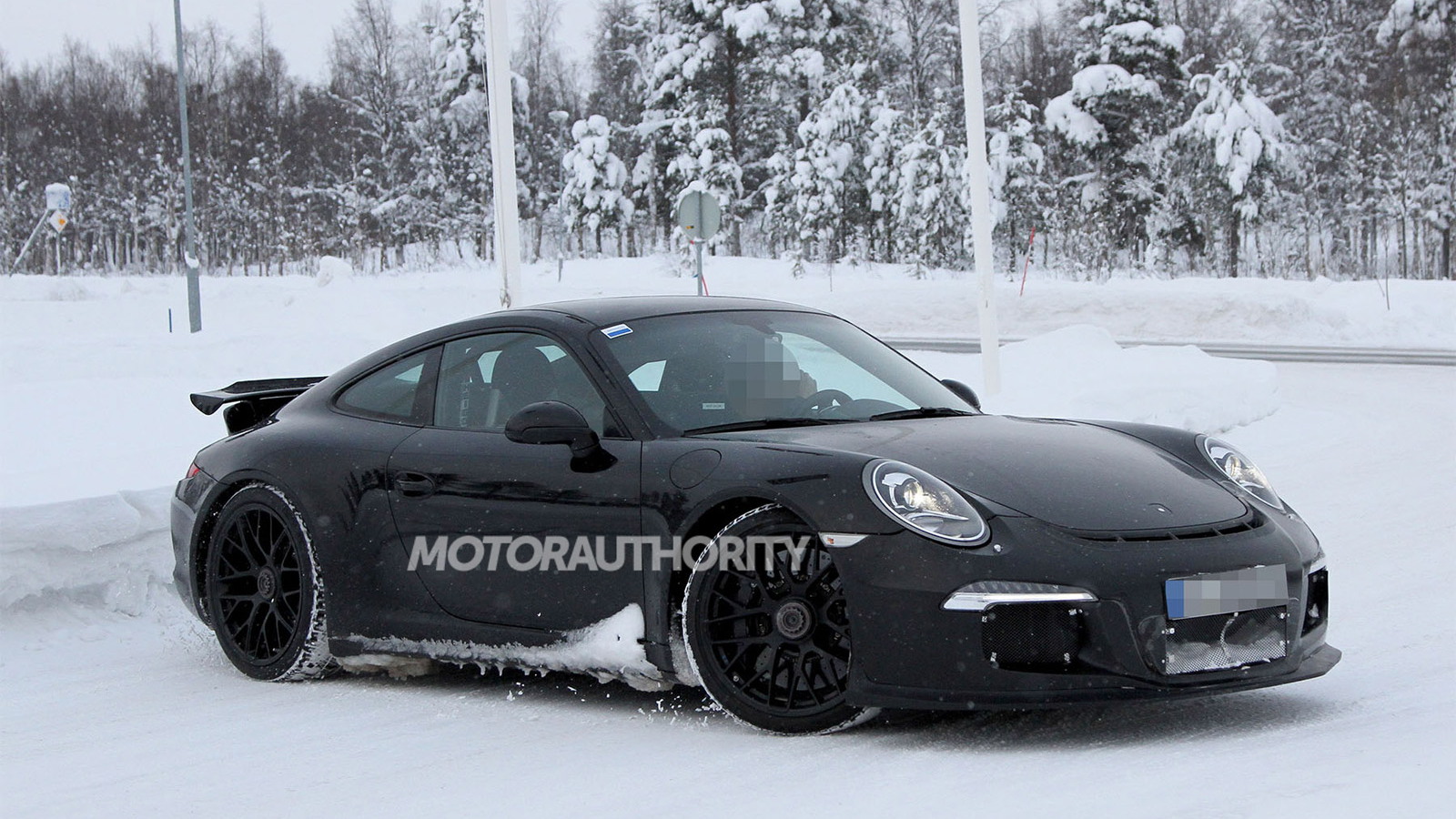 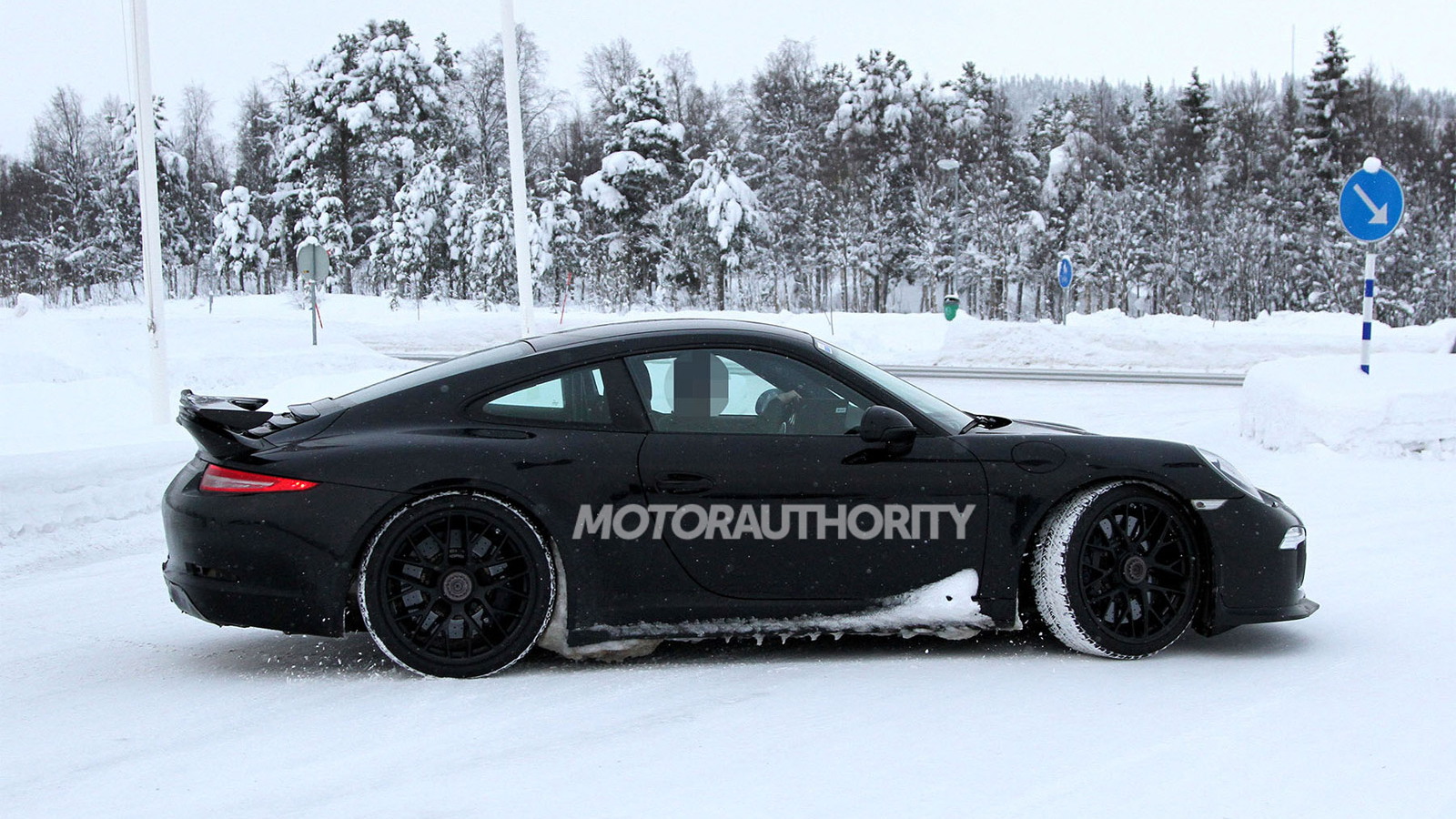 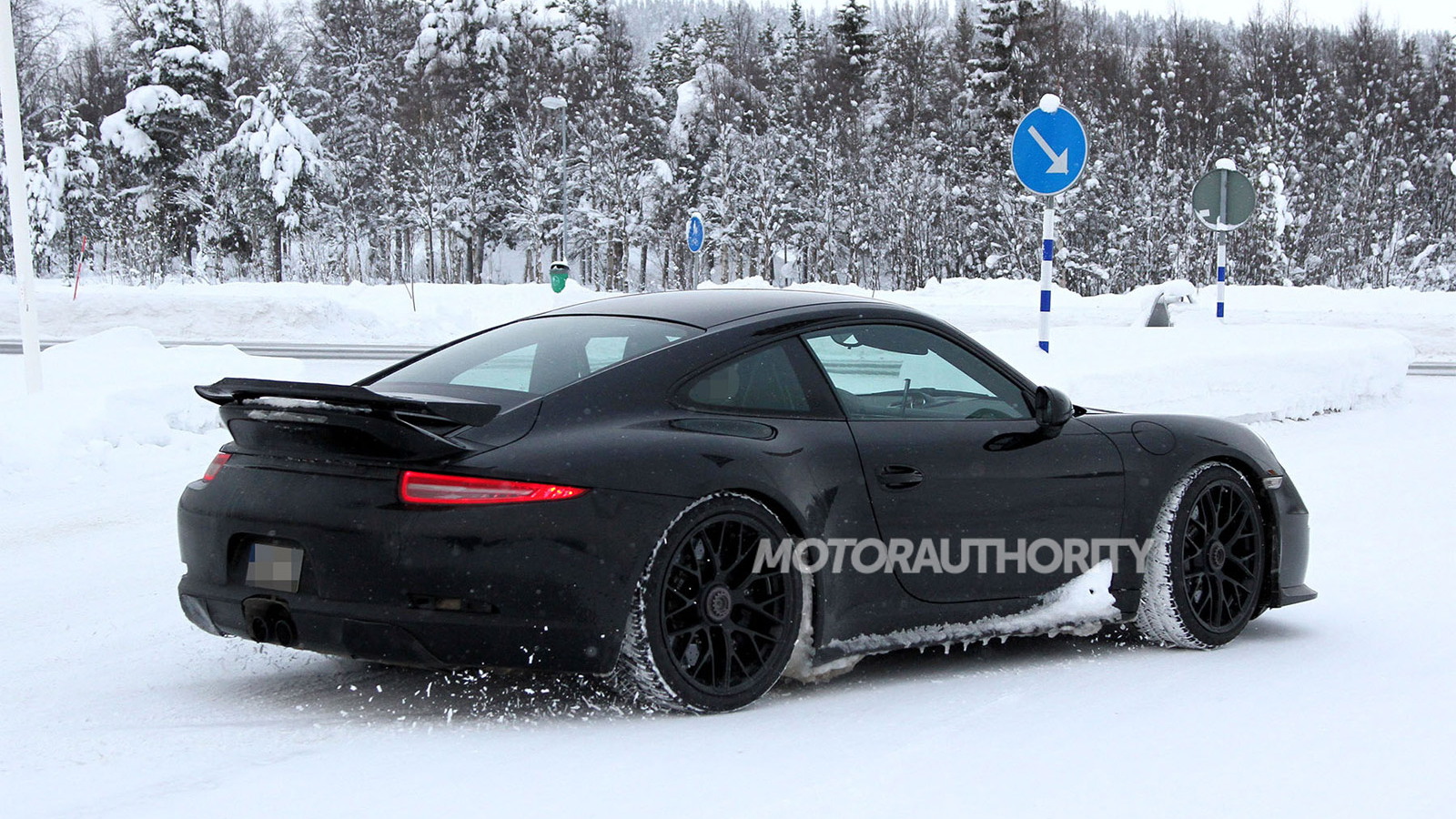 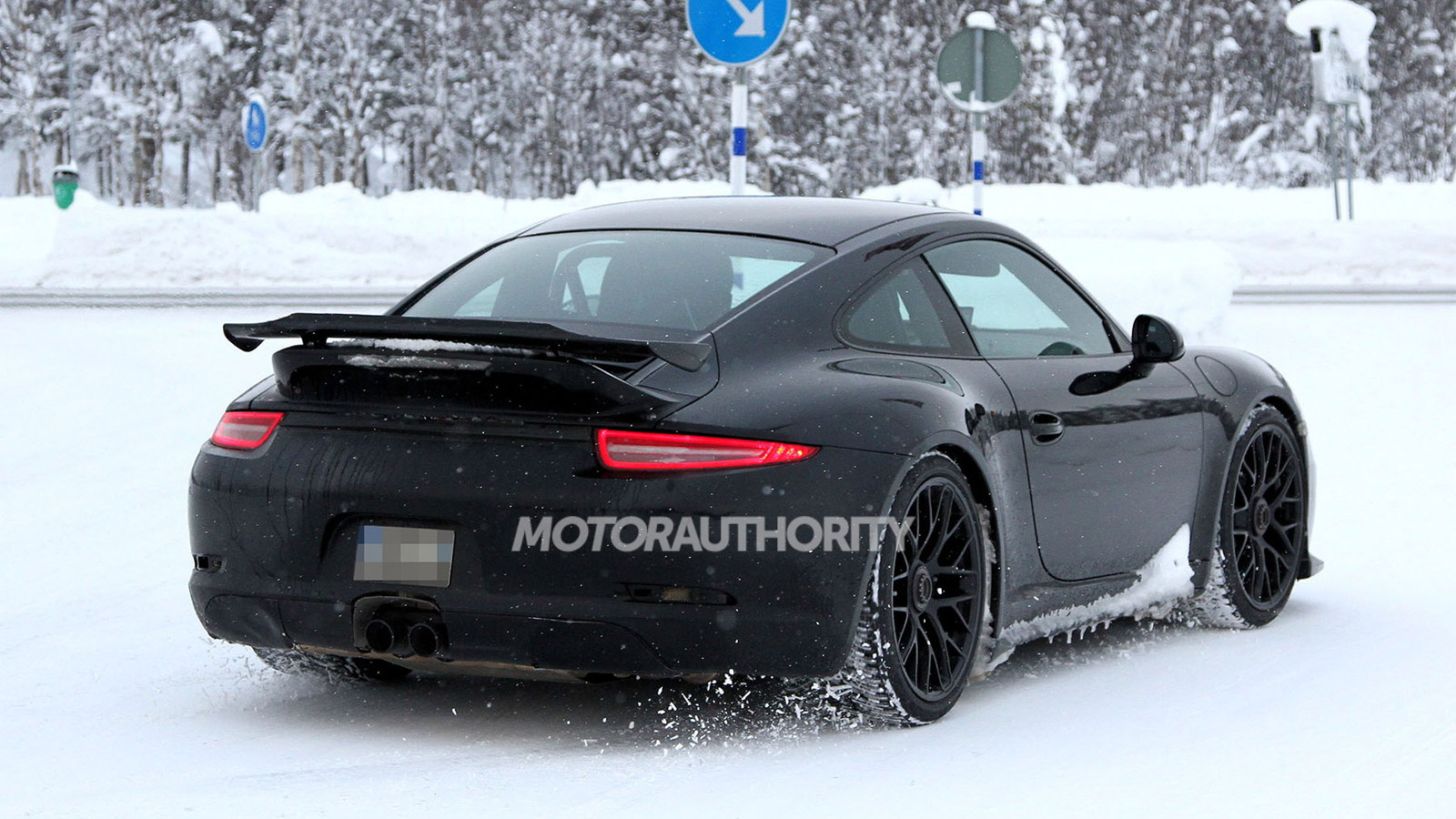 27
photos
Porsche's latest generation of the 911, the 991, is making the rounds in both rear-drive and Carrera 4 all-wheel drive guises, and it's excellent.

But what about the higher-performance versions? They're coming. This is the GT3, which is set to debut in just a couple of weeks at the 2013 Geneva Motor Show.

In this latest set of photos, the 991-type 911 GT3 is shown testing in the colds of Northern Europe, wearing zero camouflage.

The previous round of spy photos of the upcoming car showed it next to its predecessor, a pre-facelifted 997 model (in white). The comparison highlighted the differences between the 991 and 997, and showed that the newest GT3 looks every bit as much the part as its predecessor.

A previously revealed racing version, the latest 911 GT3 Cup, also gave a good idea as to what to expect.

Due on sale later this year, most likely as a 2014 model, the next GT3 is expected to follow a familiar formula to the current model, though the specifics remain unclear.

Weight savings should be even more impressive than the roughly 80 pounds saved on the standard Carrera compared to the 997 model, with lightweight materials, option deletes, and less equipment overall.

Performance should also be pushed higher thanks to improved efficiencies inside the 3.8-liter flat six that's likely to power it. The current GT3 RS turns out 450 horsepower and weighs in right around 3,000 pounds; we expect the next GT3 to come close to those same marks, with the eventual 991-based GT3 RS and a possible successor to the limited-edition GT3 4.0 moving even farther up the supercar ladder.

Details that can be seen in the photos show the new front bumper, larger air intakes, a front lip spoiler, dual central exhaust pipes, and what appears to be a new two-part rear wing--though some of the photos appear to show a GT3 sans wing. A thin, sculpted duct just below the front cargo area opening is also new. Likely used for auxiliary cooling, the duct is an interesting choice, and may indicate addition of yet more cooling capacity that wouldn't fit elsewhere under the bodywork.

Whatever the precise specs on the next GT3 end up being, given our experience with the 2012 Carrera, we expect the more focused, stripped-down version to impress with plenty of RennSport. One aspect that's already proving controversial is the possibility of a PDK dual-clutch transmission replacing the standard manual.

For more on the 991 GT3, be sure to check out our spy video here, and stay tuned for the car's official reveal in Geneva on March 5.