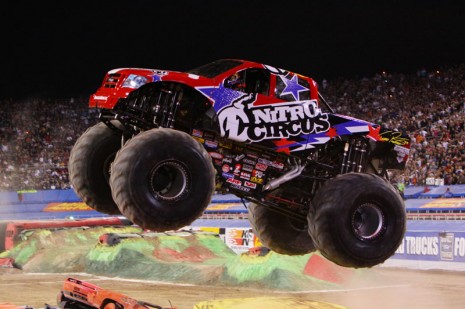 The master of motorsports madness, Travis Pastrana, is set to further unleash his inner redneck this weekend, taking a break from his NASCAR Nationwide Series work to run a monster truck through its paces in Maryland.

Climbing behind the wheel of the Nitro Circus monster truck, named after Pastrana's TV series and upcoming 3D movie, Pastrana will take to the floor of the M&T Bank Stadium in Baltimore this Saturday. The stadium is home to the NFL's Baltimore Ravens, but it will soon be filled with dirt ramps and junkyard cars ready to be flown over and smashed to bits, both of which are right up Pastrana's alley.

Check out a video of the Nitro Circus monster truck doing a backflip (at the hands of driver Cam McQueen) below to get an idea of the insanity it'll let Pastrana get up to. Then watch the second to see how it can all go wrong.