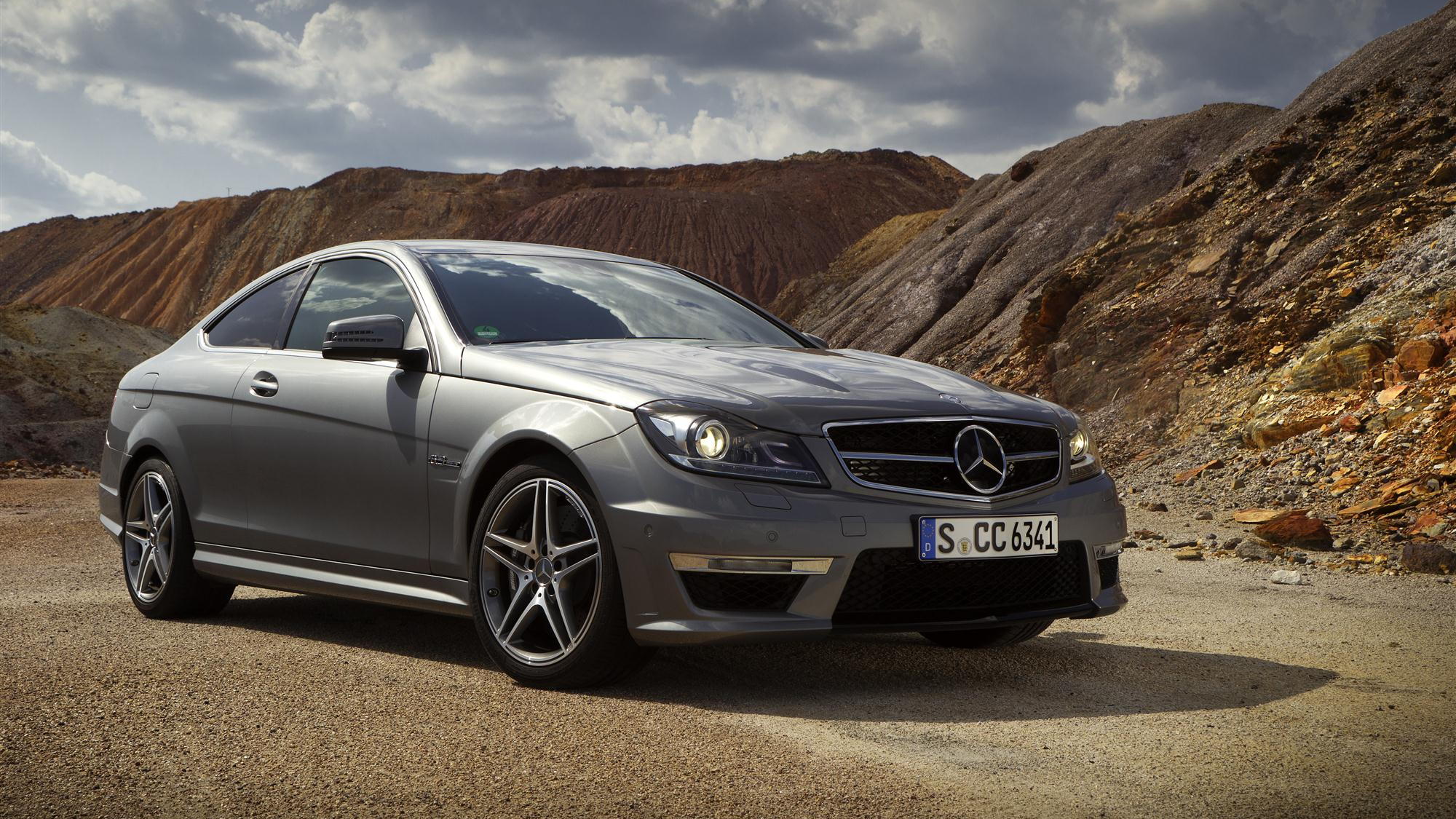 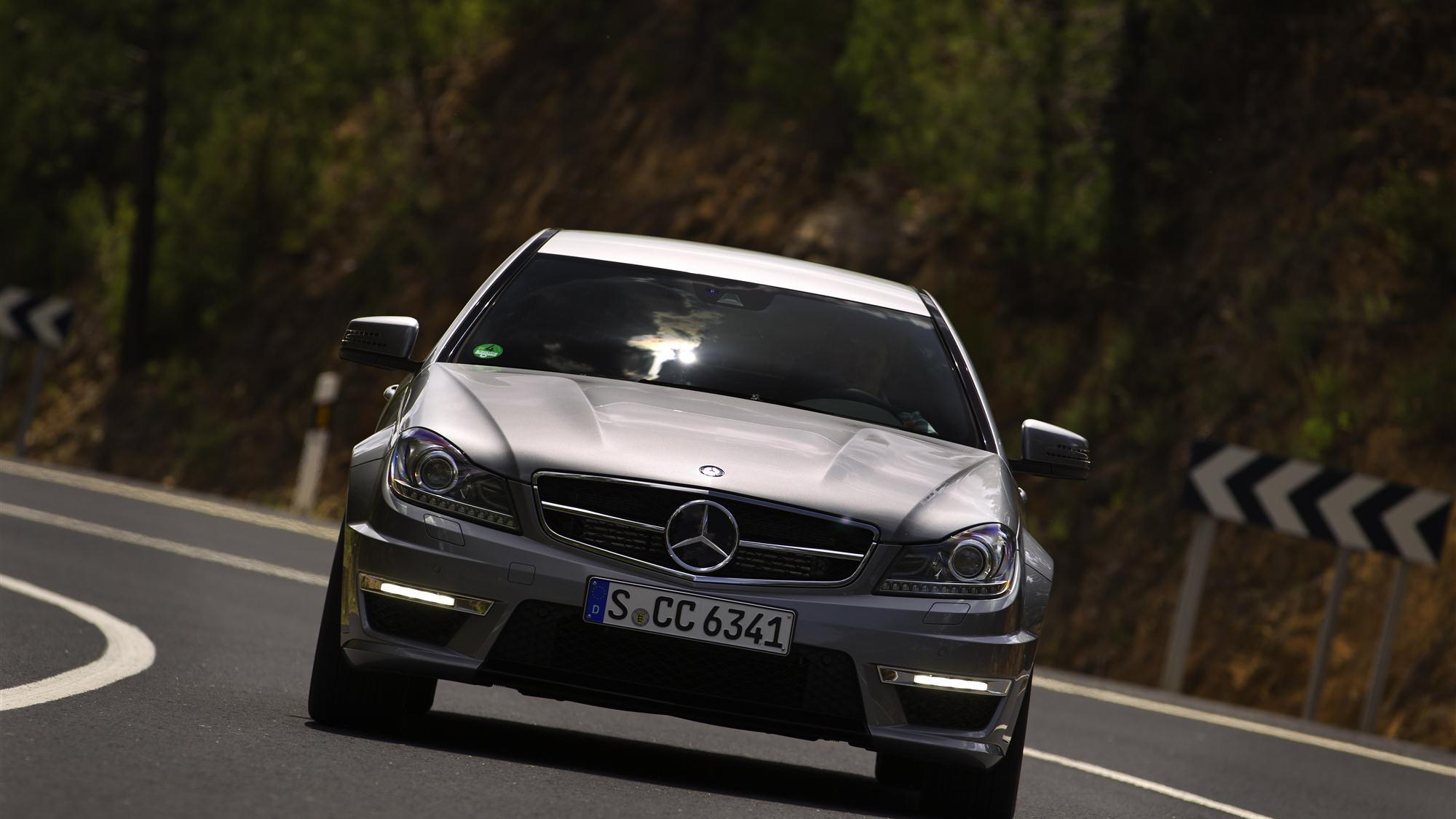 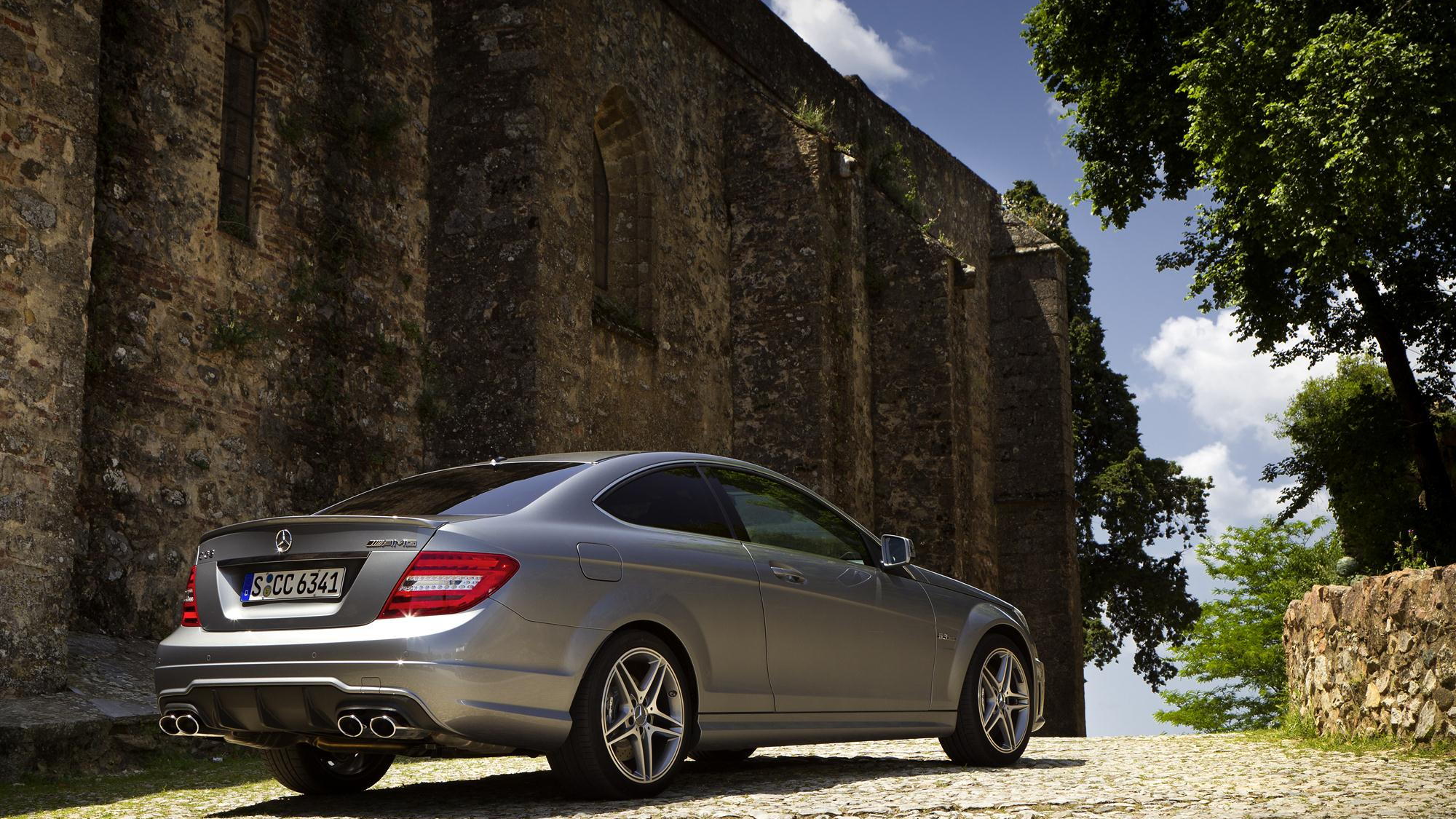 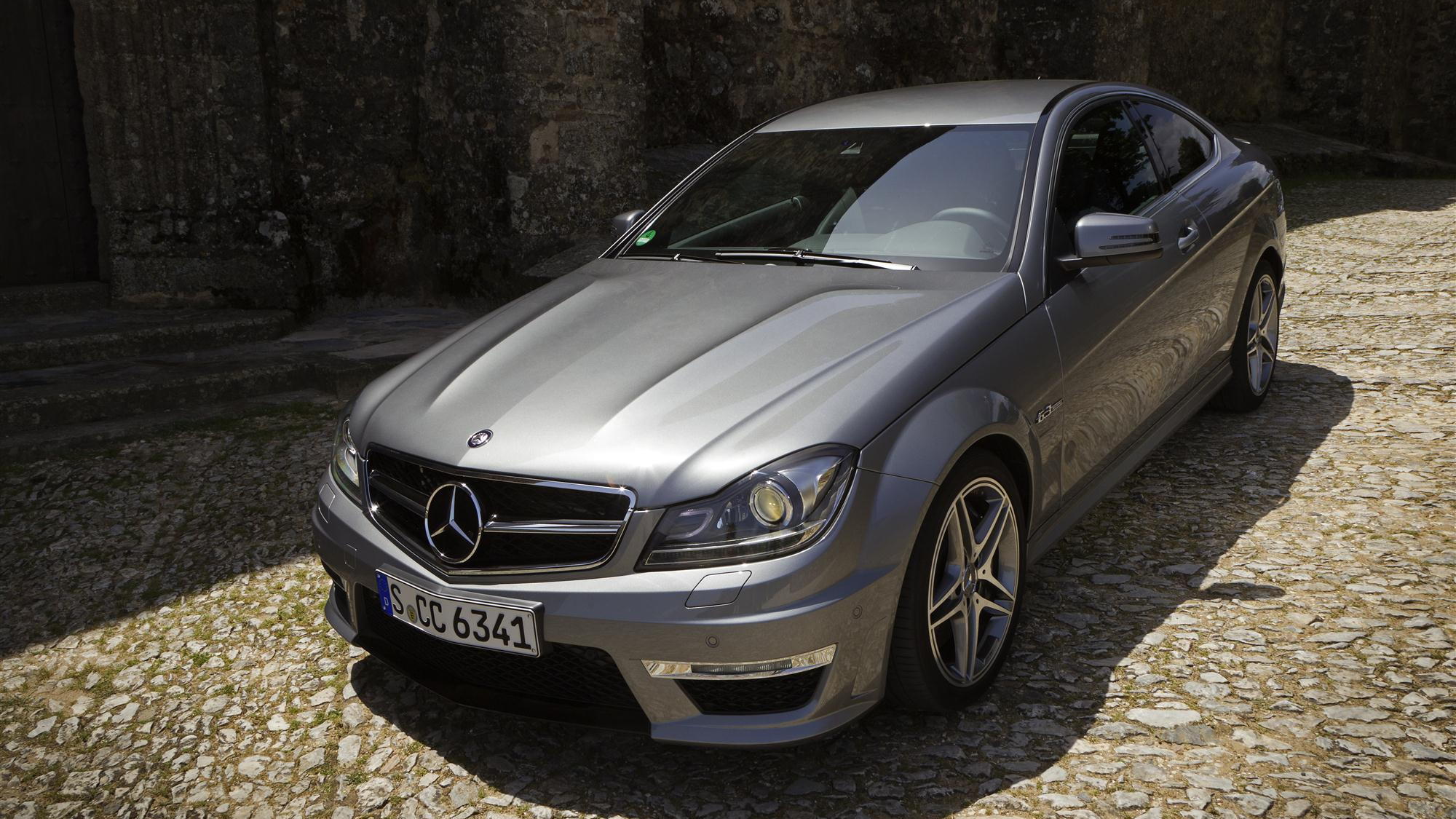 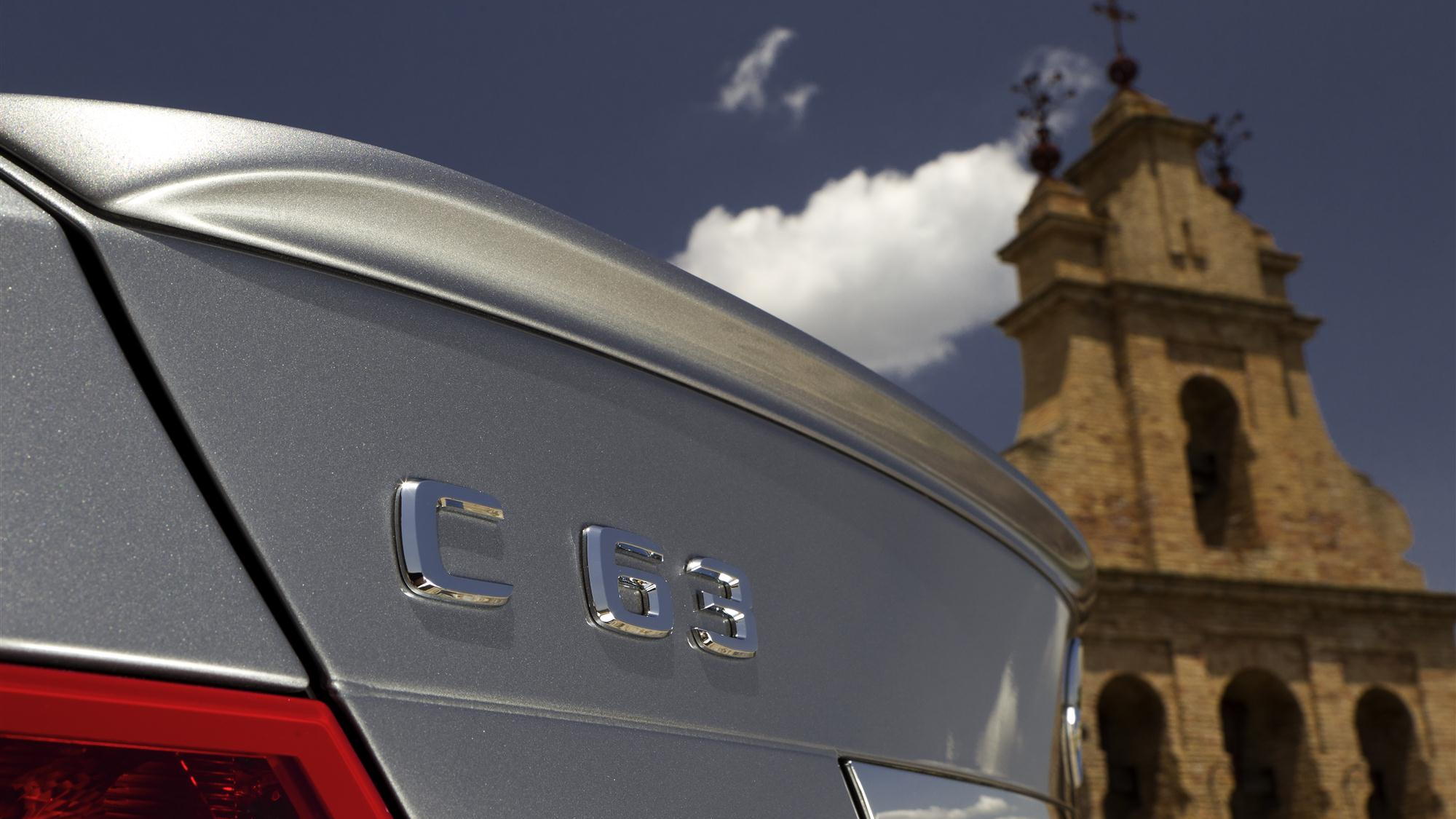 Fighting for a top spot in the affordable sports coupe market means one thing: measuring up the BMW M3. That's been the game for decades now, and it hasn't changed with the latest iteration, despite the newest model's departure from much of the past M3's formula.

In fact, the departure has been so great, BMW itself now acknowledges that the 1-Series M Coupe is more of a spiritual successor the M3 mantle the the current M3, which has grown larger, more luxurious, more high tech, and more powerful. The raised bar might seem high indeed, but Mercedes-Benz's AMG division feels up to the challenge with its latest coupe, the 2012 C63 AMG.

This two-door breaks with much of the refreshed or new AMG lineup by skipping the new 5.5-liter twin-turbocharged V-8 and going with the tried and true 6.2-liter naturally aspirated V-8. The choice has as much to do with price as it does with performance, but it turns out to be a very compatible pairing for the new Coupe's chassis.

Using every available millimeter of space in the engine bay--actually, more than there is in the standard coupe, as the bay is lengthened and slightly widened to accomodate the big V-8--the 6.2-liter V-8 provides exactly what you'd expect: gobs of low-end torque, easy tractability around town, and passable fuel economy on the highway.

Playing a role in this combination of raw power and docility is the wet-clutch seven-speed automatic transmission. Clicking of shifts with the steering wheel-mounted paddles, it feels nearly as quick, if not as precise and connected, as a true dual-clutch unit. There's no option for a manual in this car, and while purists or those that find the joy in rowing the gears themselves will miss it, it doesn't really detract from the car's capability, either on the road or the track.

Speaking of which, our test grounds for the new C63 AMG Coupe were the highways of Spain, with a brief lapping session at the Circuito Monteblanco, near Seville. Mercedes-Benz flew us over there, via Munich, for a whirlwind look at the C63 AMG Coupe and its tamer sibling, the C-Class Coupe. The hotels were, predictably, first-class, as was the food, and driving through the Spanish countryside in Spring is an experience to remember.

All of that aside, however, the C63 AMG Coupe holds its own on the hard stats as well as the lifestyle experience. Want to rocket to 62 mph? That'll take 4.4 seconds with the 457-horsepower, 442-pound-feet standard C63 AMG, or 4.3 seconds with the 487-horsepower Performance Package-equipped version. If you're contemplating one of these cars, we say go for the gusto, as it livens up an already lively car without compromising its civility in any meaningful way.

Tipping the scales at a listed 3,814 pounds, the C63 AMG is right in the ballpark with the BMW M3, which weighs in at a claimed 3,704 pounds. Both offer about the same fuel efficiency as well, with the M3 rating 14/20 in EPA estimates, and the C63 AMG Coupe securing a 12.0-liter/100 km (19.6 mpg) combined rating in European testing. Official EPA stats for the Benz aren't out yet.

But can it hang with the M3 on track? Nearly.

At least, in the hands of the average enthusiast, the difference will be near enough to zero. In the hands of a pro, the M3 will likely leverage is lower weight and better tire-to-weight ratio to its advantage, though depending on the track, the superior power of the C63 Coupe may win the day.

At any rate, the C63 is very fun to drive on the track, whether in the safety-nanny recommended Sport modes of the transmission and stability control systems, which let you play with slip and yaw angles, but not too much, or in the fully-disabled race mode. Turn the controls completely off and you're welcomed by a chassis that's obviously been finely tuned for its application, the ability to slide the car around at will, and, when you're paying attention, to get even more out of the car than the computers will help you do in the assisted modes.

Power-on oversteer and corner-entry oversteer are both easily provoked no matter which mode you're in, however, so a careful and measured application of  both brakes and throttle is required for fast laps. The brakes are potent, making the most out of the available grip, and exhibiting no appreciable fade even though several of the cars got only minimal breaks between sessions--one cool-down lap and a few minutes in the pit lane. Driving behind DTM racer Bernd Schneider, at the wheel of an SLS AMG, the C63 AMG was able to keep up with relative ease on laps at about 70-80 percent pace. That's a commendable feat, especially considering the price and power differential between the cars.

In short, if you buy the C63 AMG as a potent street performer with an eye on the monthly or occasional track day, you'll have nothing to complain about--it'll likely exceed your own abilities for quite some time.

On the street, the AMG-treated interior comes to the forefront, ably limiting road and powertrain noise to comfortable levels, though the big V-8 makes itself known when the throttle is opened up. Ride quality is good, particularly in the "C" mode, which softens up the dampers and relaxes the transmission's automatic shifts. Here, the C63 AMG Coupe even has an edge on the M3, which can ride a bit stiffly even when tuned down, and tends to bang its shifts home in a more abrupt manner.

Materials, fit, and finish are all good, but not necessarily great--certainly not the best of the AMG world, but its pricing reflects that. It's certainly on par with the M3, and shares most of its minor foibles with that car as well: a dash made of material, and in a shape, that could bear some more attention, but does its job well enough; a few minor trim pieces in the doors and console that aren't as high-quality as we'd ideally like, and, of course, not a whole lot of space in the rear seats, though they're certainly usable for short trips.

At the end of the day, the C63 AMG Coupe is every bit a capable competitor to the M3, but at the same time, it's very different. While the M3 appeals more the racer in us, the C63 awakens many of the same feelings, if not as keenly, while providing a more relaxed and comfortable environment where it'll see the vast majority of its use: on the street.