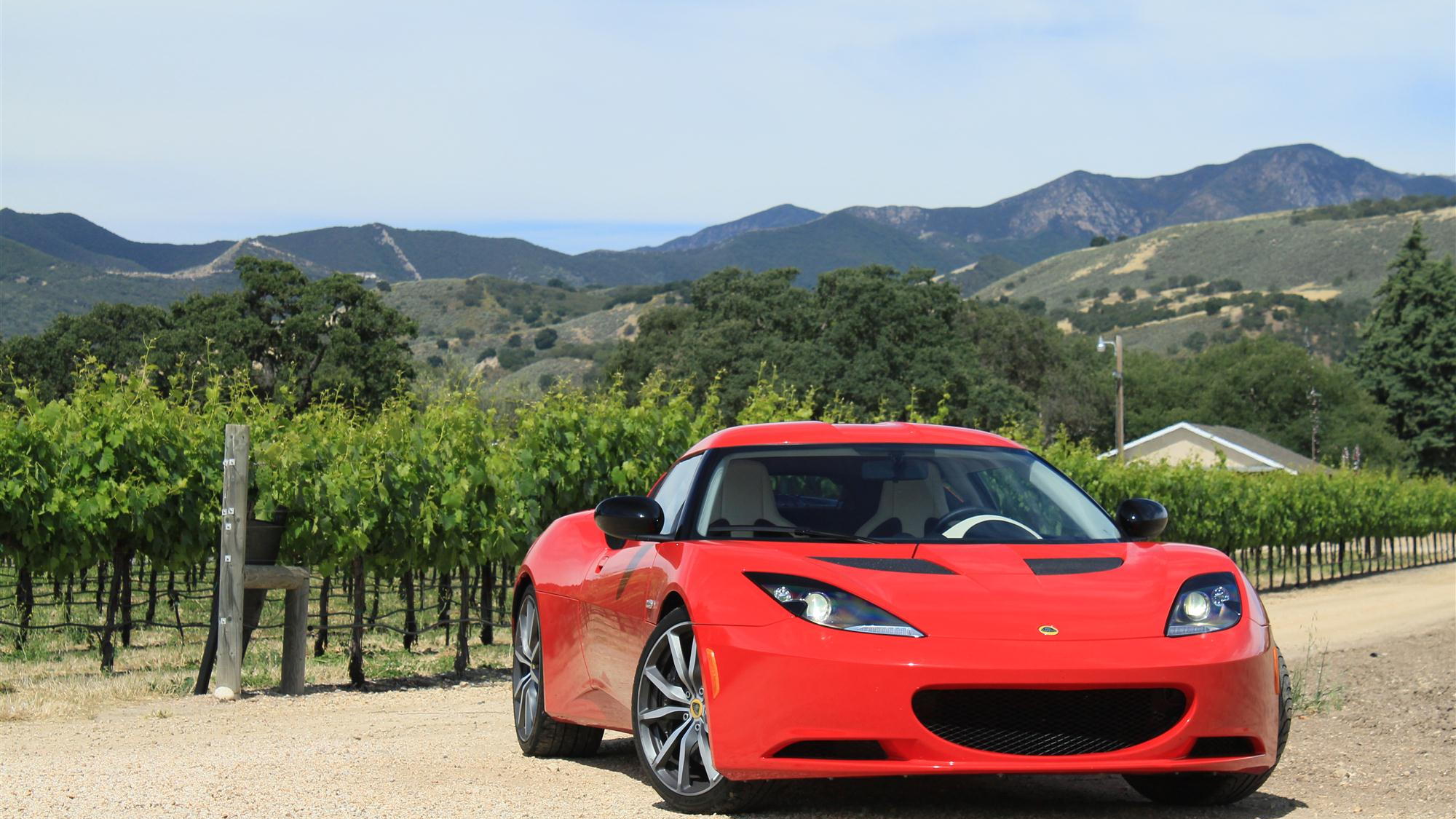 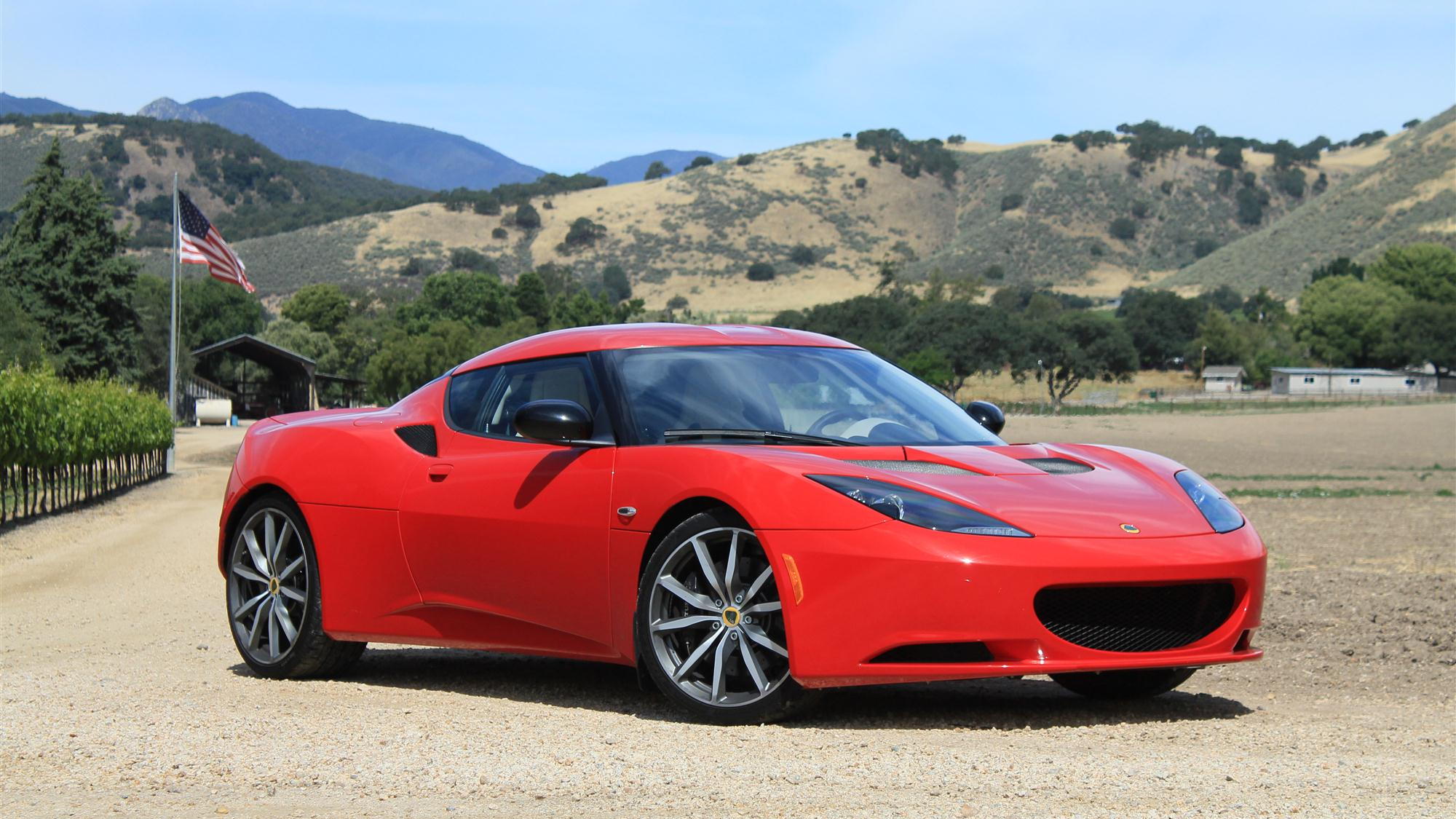 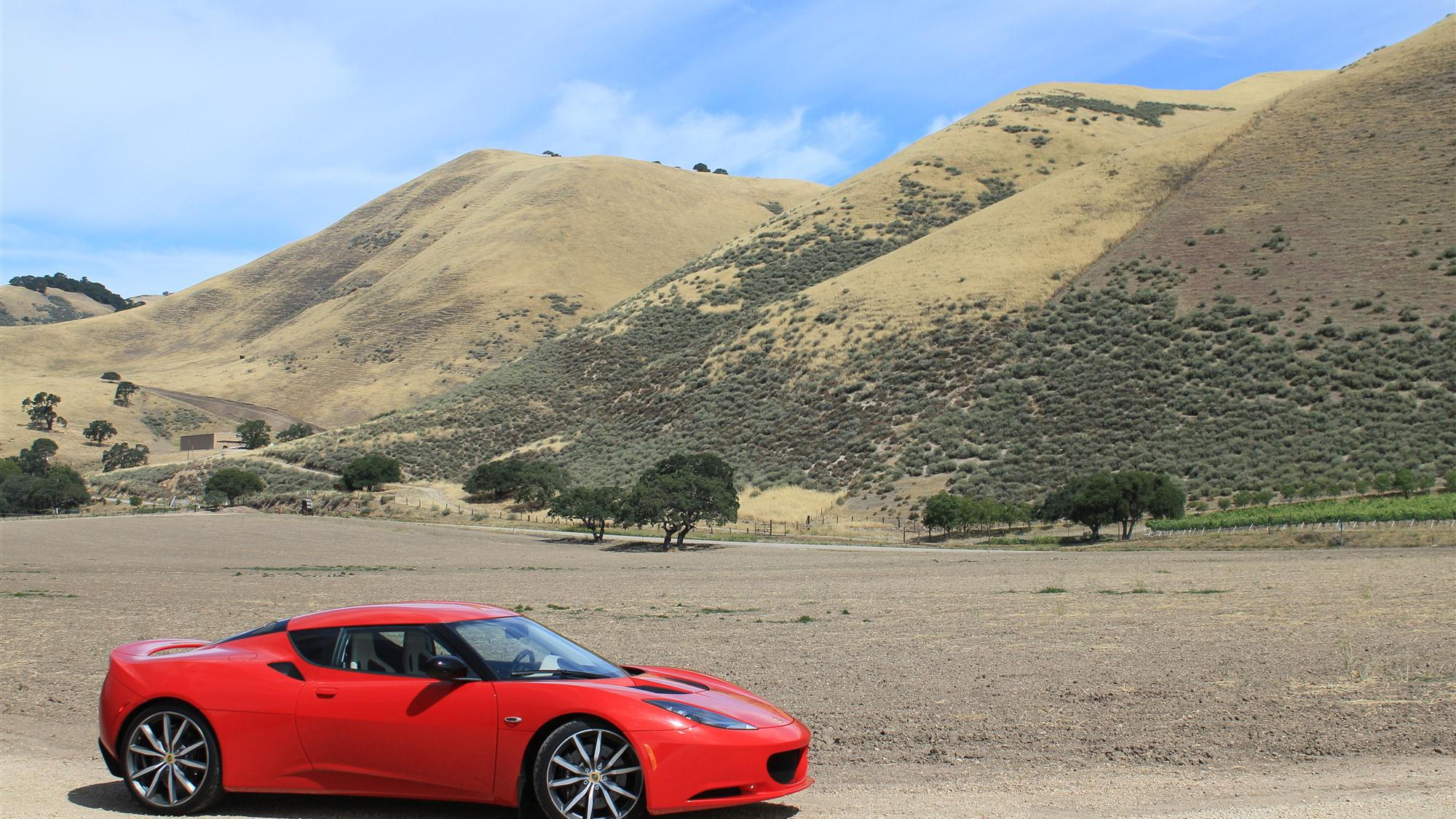 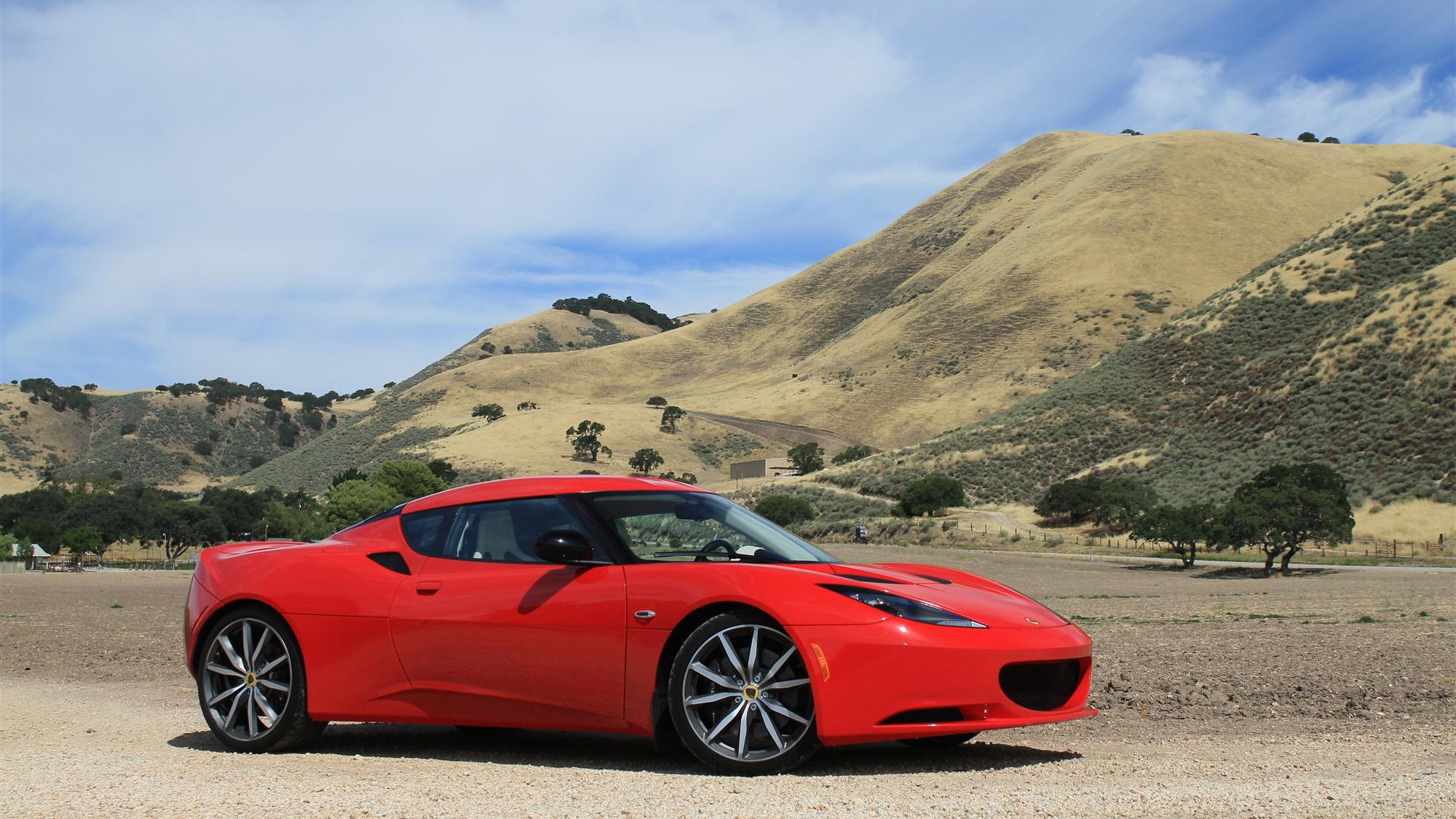 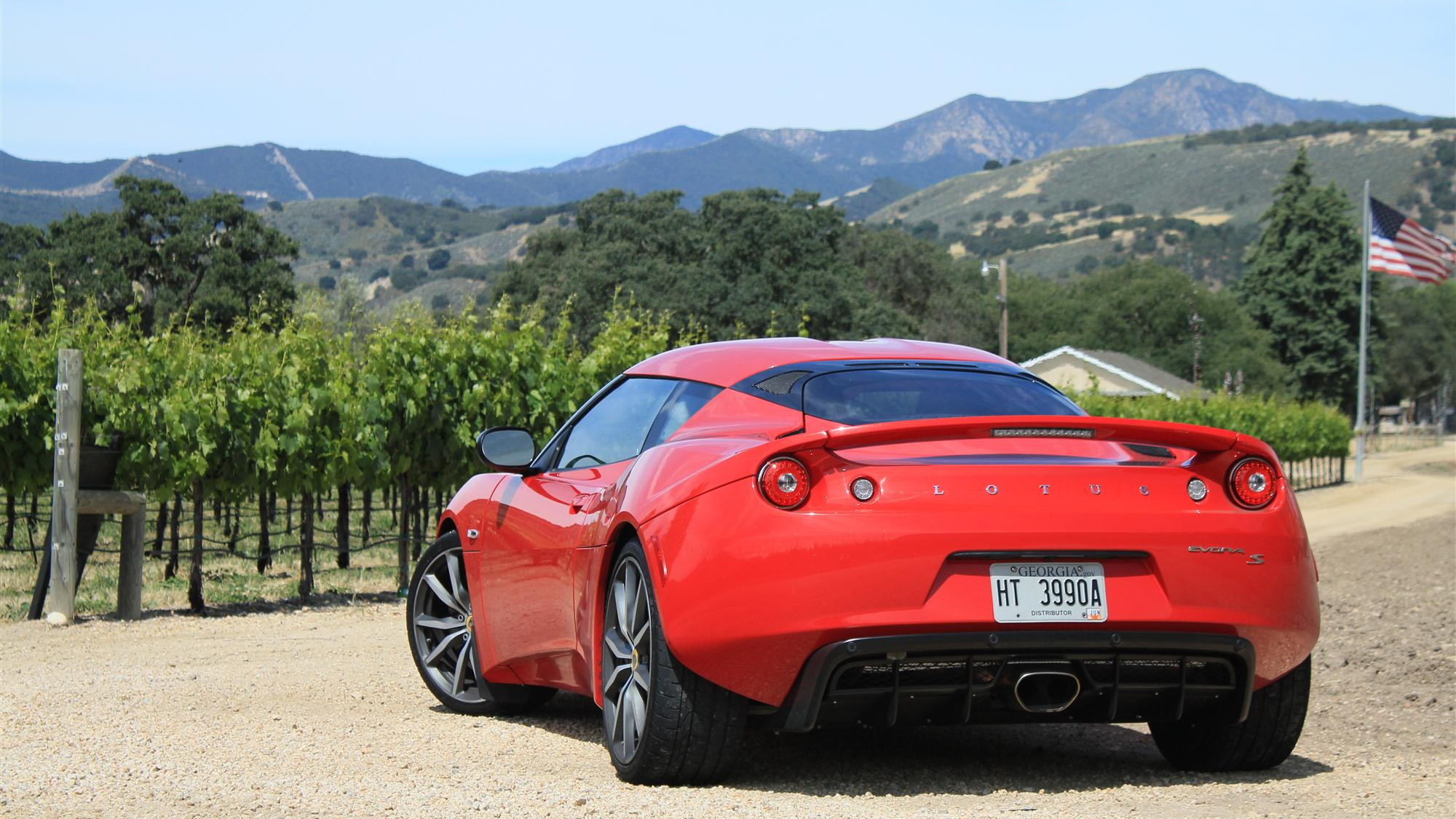 32
photos
There are days when it's especially good to get paid to write about cars, and last Friday at Laguna Seca was one of them.

Lotus brought several groups of journalists out to test the new 2011 Evora S alongside the standard Evora, putting us up in decent hotels and giving us access to some of the best roads between San Jose and the track.

Laguna Seca is a fun and challenging track. It offers a range of high- and moderate-speed turns, elevation changes, and several opportunities to maximize the benefits of power. The Evora S is almost ideally suited to this place.

Why? Because, like its non-supercharged sibling, the Evora S is nearly perfectly balanced, tending neither toward understeer nor oversteer, but letting the driver induce either situation on demand or not at all. Unlike some mid-engine cars, the low polar moment of inertia doesn't promote any spin-happy behavior. In fact, it's confidence inspiring even with all of the driver aids switched off.

When Lotus says the driver aids are switched off, they mean it, unlike some carmakers. The only aids left in effect are ABS and the electronically-operated limited-slip mechanism, which uses the brakes to control power application. Yaw, slip, and slide are all in the driver's control--and the driver's control is borderline incredible thanks to the feel and feedback of the steering and chassis.

It may be overstepping a bit to make this comparison, but the Evora S presents itself as a smaller, slightly less capable, slightly less telepathic version of the 458 Italia I drove over some of the same roads at last year's Pebble Beach Concours. When dressed in red exterior paint and tan leather, it even presents a bit of the image of a mini-Italia. And for the starting price of just $76,000, that's a hard bargain to argue with.

The thrust of the Evora S is impressive to the point that it makes you wonder if the 345-horsepower, 295 pound-feet rating isn't just a bit low. Take off hard in first gear, run through second, and you're above freeway speed limits before you're into third--and well before the end of the on-ramp. Do it on the track and the car willingly darts forward, punishing only the most brutally ham-footed stabs of the gas pedal. It's really a delight to drive--no unexpected or vicious behavior, just completely willing responses to almost any request. By the numbers, it's good for 4.3 seconds to 60 mph and 10.2 seconds to 100 mph. The quarter mile takes just 12.8 seconds with a trap speed of 110 mph. It'll pull 1.2g on the skid pad. It's a quick, nimble, and tossable car.

Some may not find the Evora to live up to the spirit of the "true Lotus," however, arguing that the luxury and attendant heft it brings veers sharply from Colin Chapman's ethos of performance through lightness. That's not entirely unreasonable--the Evora S weighs in at 3,168 pounds, about 120 pounds heavier than the Evora due to the supercharger and related equipment packages. But considering the Evora S's performance level and the weight of its competitors, such as the Porsche 911, it's a relative featherweight, coming in about 300 pounds lighter while still managing to provide a solid slate of creature comforts.

Those creature comforts are relative, however. The ride quality is amazing considering its on-track capability--very little body roll is to be found on track, yet the Evora S soaks up even severely deteriorated pavement as well as most sport sedans. You'll sense every bump and ripple, but they won't jostle you about or make you wince. Paired with the surprisingly comfortable seats (they're very thin, but despite the look, accommodating, even for a six-foot-plus 190-pounder), it's a supple, comfortable ride even on extended trips. Opt for the 2+2 configuration with rear seats and you'll be able to haul around any legless dwarves you may know, but unless you need to save some cash on your insurance payments, pick the parcel shelf that comes with the 2+0 model to add some real practicality to the car.

I did find a few downsides to the Evora S during my short two-day stint through California, however. First and foremost, when you're paying into the mid-$70,000-range for a rare, exotic, mid-engine sports car (the Evora S easily satisfies all three), you expect the entire experience to be viscerally satisfying, or at least I do. There's one key element missing in the Evora S's equation, however: the sound.

Using a heavily massaged Toyota 3.5-liter V-6, however well it produces power, may make for a poor starting point when it comes to guttural groans and wailing runs to redline, but the gearbox lets it down as well. Borrowed from the Euro-market Lexus IS 200 diesel, the six-speed manual transmission is certainly rugged, but it sounds a bit truckish. There's lots of throwout bearing clatter on clutch-in, a distinct cacophony of grinding and generally unpleasant mechanical sounds through first and second.

Stand on the gas pedal and you might expect the whine of the Harrop supercharger to quickly become the dominant note, but it's a scrabbling, sucking sound from the intake that takes over at first, followed by a decidedly normal V-6 hum as the revs rise. Despite the sporty exhaust on the Evora S, which opens a valve to improve flow and let a bit more bark out, there's very little potential for the soundtrack of this otherwise brilliant car to raise the hairs on the back of your neck.

That lack of auditory delight, present in so many flat sixes and even turbo fours, does hang like a cloud over the full enjoyment of the car, but it's only in your mind until the next crest, curve, braking zone, or romping straight--at speed, the car is so full of tactile feedback and information you don't notice the lack.

Like the engine note, the gearshift isn't exactly ideal, either, though it's perfectly serviceable. The throws are longer than you'd expect, and can be a bit notchy when trying to shift with any residual lateral acceleration. For those that would rather not row their own gears, the Intelligent Precision Shift version of the standard Evora will be along later this year, offering automatic gear changes with paddle shifters for the times when you'd like a little more control, but at the expense of the supercharged thrust. Even with the issues, however, I'd pick the manual--and definitely the S.

On the whole, the Evora S strikes an excellent balance of performance, style, comfort, and price, and should be taken into serious consideration by anyone looking for a truly rewarding driver's car with daily-driver capability.