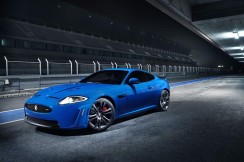 Billed as the "most potent series production" Jaguar ever, the XKR-S is staged for a debut at the 2011 Geneva Motor Show. The XKR-S leverages a 542-horsepower supercharged V-8 engine to rocket to a top speed of 186 mph, hitting 60 mph in 4.2 seconds and 100 mph in 8.6 seconds along the way.

If those numbers sound a bit less than massively impressive in an era of 250+ mph supercars and sub-3-second 0-60 mph times, that's fair enough, but those cars aren't Jaguars.

At least, that's what Jaguar has to be hoping you'll think, as the XKR-S, like the just-revealed Aston Martin Virage, seeks to meld world-class grand touring comfort and opulence with "inspirational" performance.

Aiding that performance will be unique suspension elements, including a reprogrammed Adaptive Dynamics system that lets drivers play a bit more before the computer steps in. The all-aluminum body helps to cut weight, which Jaguar says sharpens handling and cuts fuel consumption, though you can never expect a 500-plus-horsepower two-door to be a fuel-sipping commuter.

Aside from the crucial stats above, Jaguar is remaining tight-lipped on its XKR-S, with full details to be released at the unveiling in Switzerland March 1.