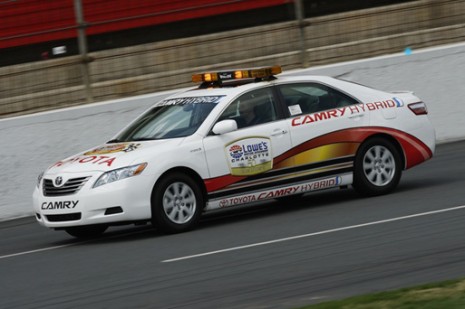 Would you tune in to NASCAR, not on Sunday race day, but on "Must-See TV?"

A report out of Hollywood suggests NASCAR is lending its drama to NBC for "The Crew," a new drama that unfolds with the racing series as a backdrop. From the pen that brought you the short-lived superfriends drama Heroes, Joe Pokaski's new drama will follow brothers who work on a NASCAR racing team and have a shared goal--but probably predictably, many different ways of getting there. Watch for black sheep, relationship angst, and, we suggest, chunks of tires if you're on the infield.

NASCAR has been chronicled before on TV and in film--but it's rarely been treated seriously. Think Talladega Nights, or the recent "poor and stupid" episode of South Park. A distinct difference with the new pilot: it's said to be done with the full cooperation of the racing league, down to the usage of its brand and marks, traditionally the final frontier of mega-licensing deals in all media.

We can hope the series won't turn into another Days of Thunder, which Car and Driver once deliciously described as "inexplicably filled with enough smoke to cure several thousand hams."