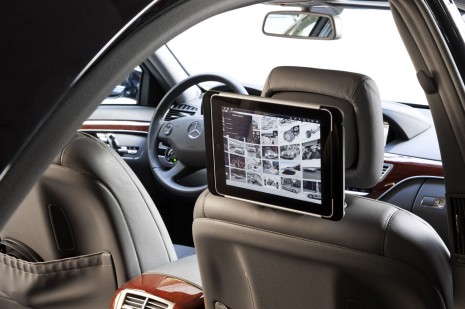 Mercedes-Benz is adding to its tech bona fides with a new Media Interface Plus.

Earlier this month, the automaker unveiled an iPad kit for European customers, at the Paris auto show. The kit mounts owners' Apple tablet devices behind the front headrests, and puts the iPad in easy reach of back-seat passengers for viewing video or connecting to the Internet. The kit hasn't been confirmed for the American market yet.

The new MIP is destined to hit dealers soon, at a retail price of $298. With the new adapter, Benz drivers will be able to connect their smartphones to their cars' audio systems to unlock features and apps from the handheld devices, and to control them from the car's interface. The plug-in remains either in the car's glove box or in the center console.

Among the new apps to be integrated is Pandora, which enables audio streaming over 3G data bands. With Apple products, the signal arrives through the MIP; on BlackBerry devices, it's streamed over a Bluetooth connection. In either case, the MIP also charges the phone or music player and allows control through steering-wheel buttons. A video cable also enables playback on the car's screens when it is parked.