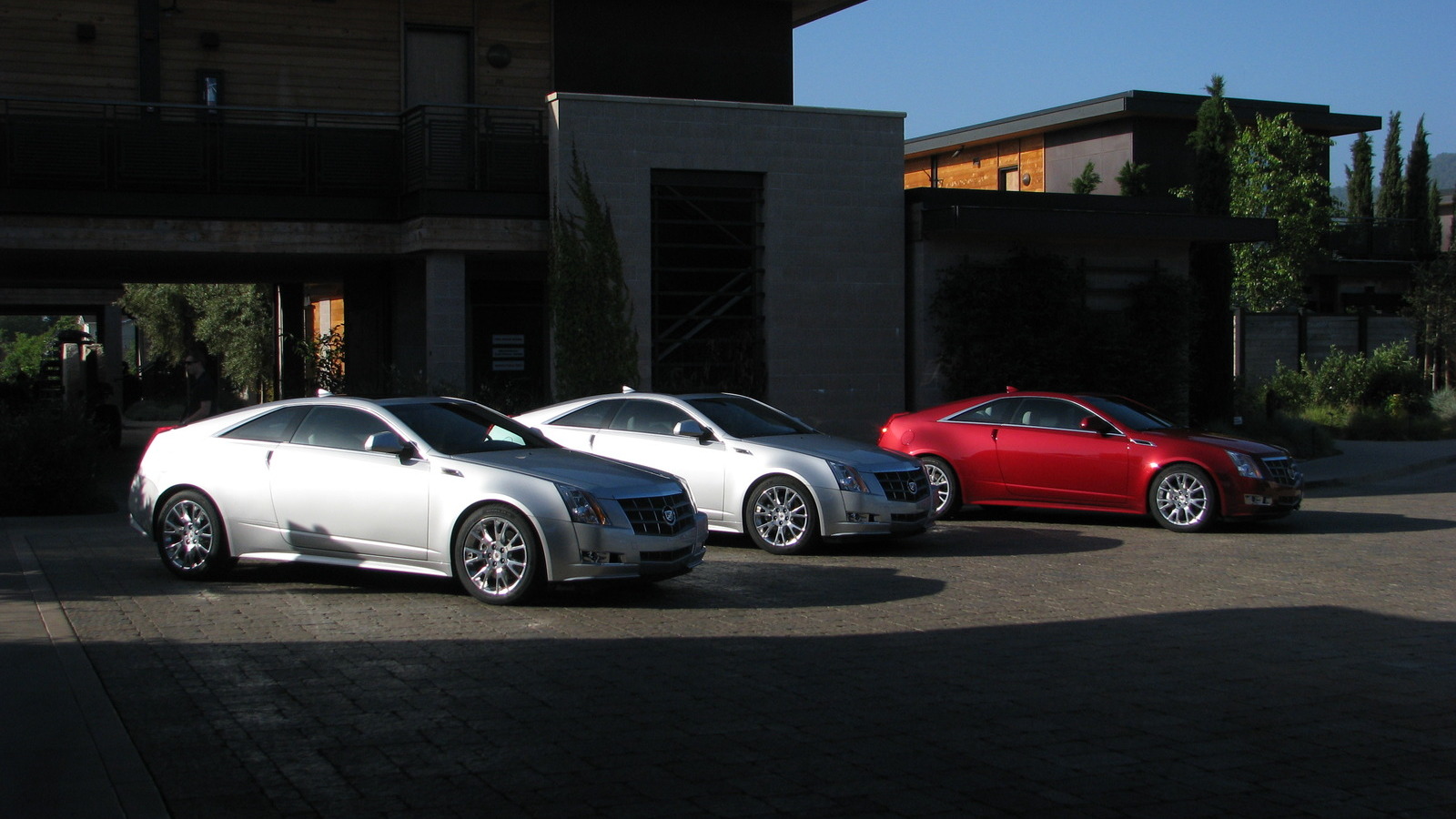 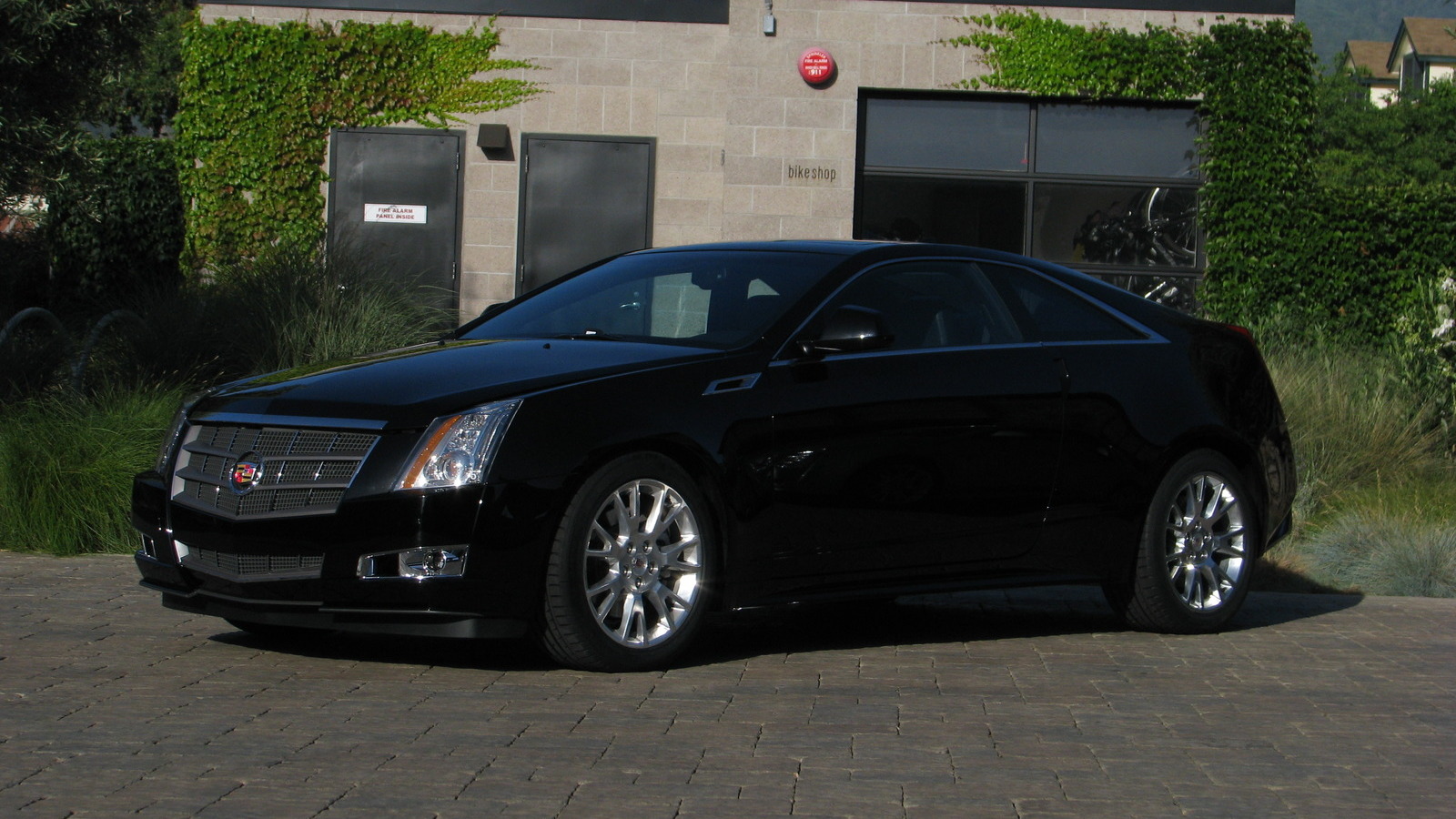 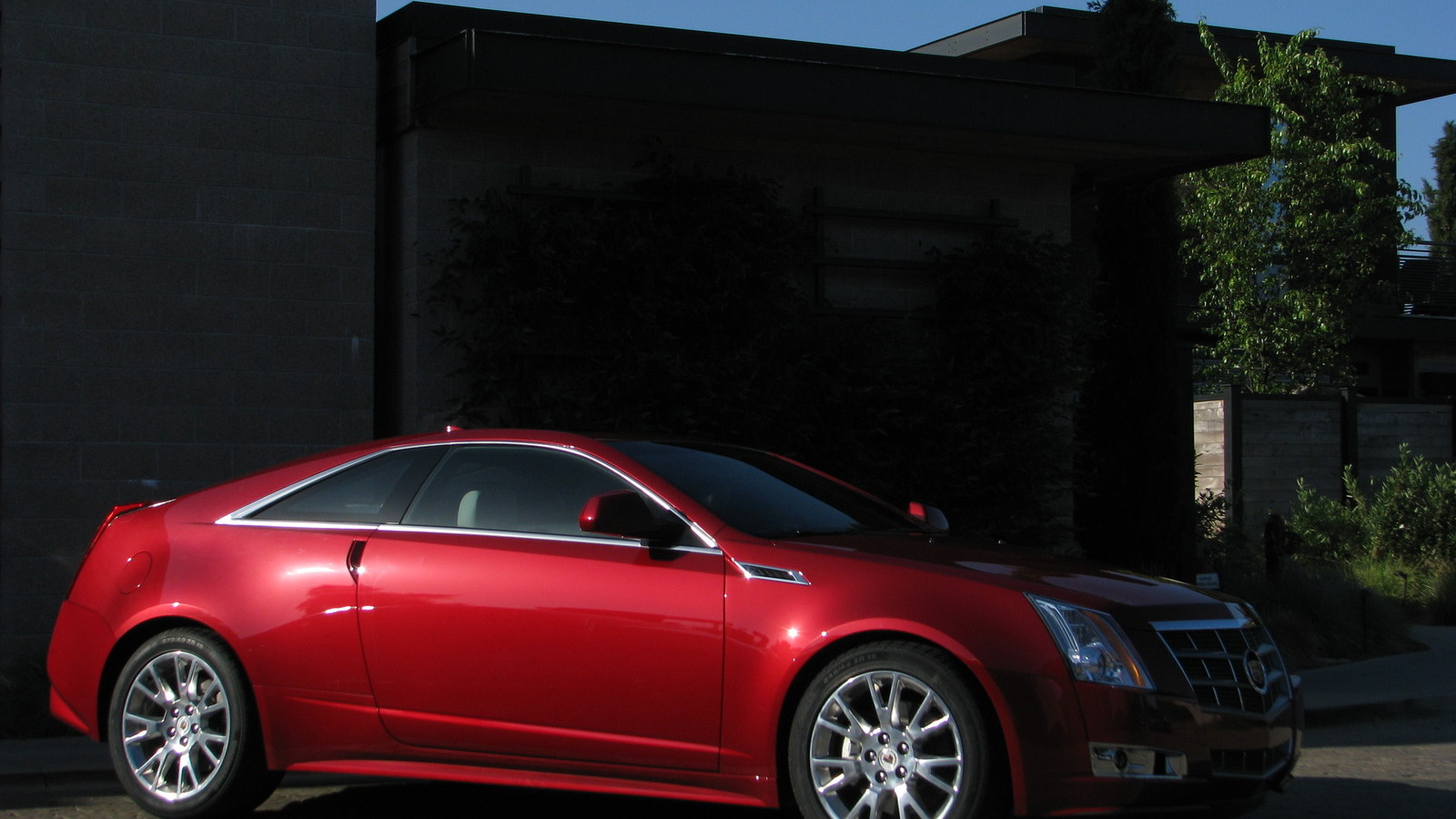 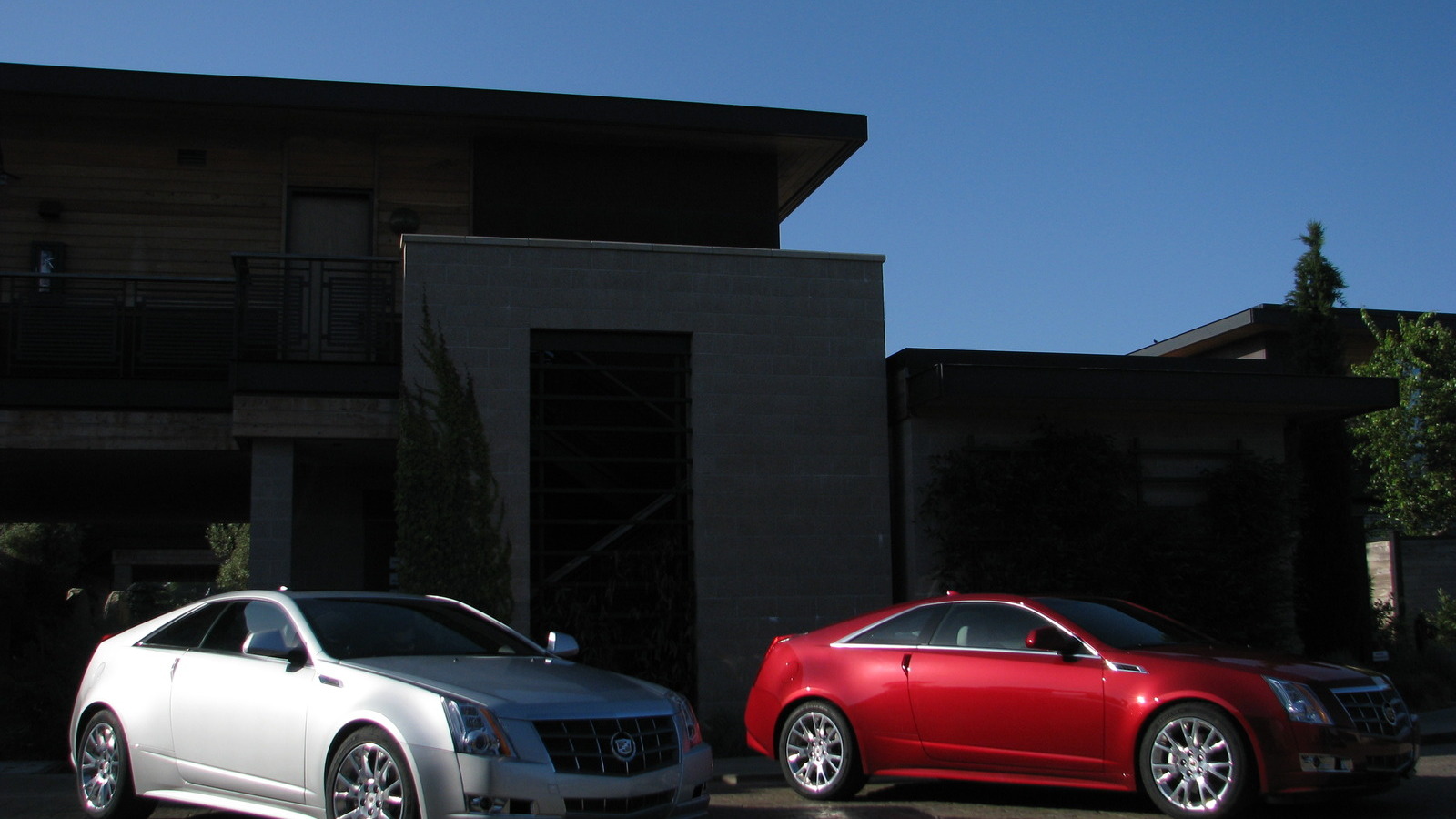 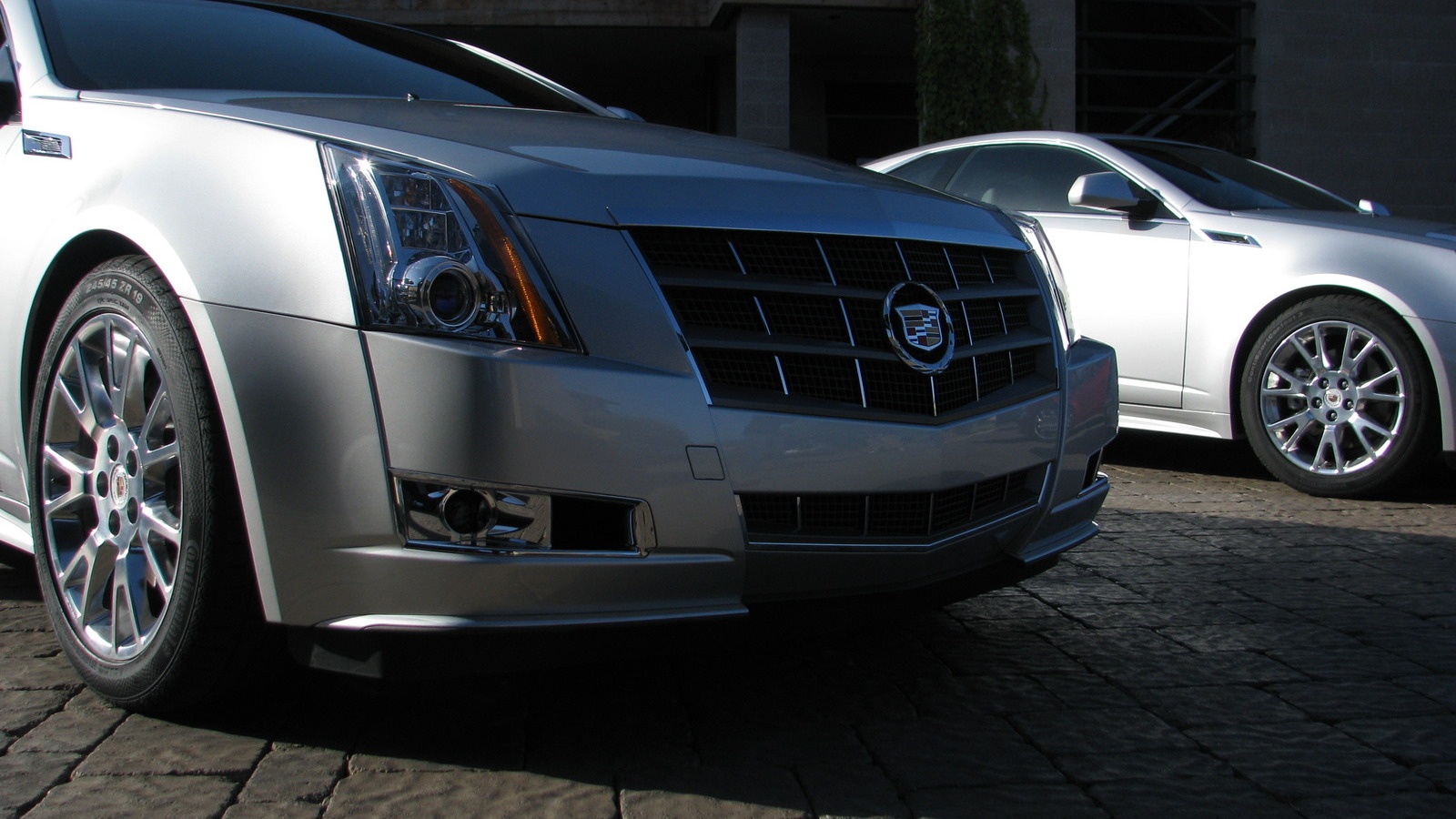 It turns out touring the countryside around Napa in one of the best-looking luxury sports coupes soon to be on the market isn't a bad way to spend a Tuesday morning. But we'd have the same opinion of the new 2011 Cadillac CTS Coupe even if we'd been stuck in Los Angeles traffic most of the day.

Disclaimer: Cadillac flew us out to Yountville, put us up in some eco-luxurious digs and provided a day of first-rate touring through the fantastic rolling hills of northern California.

The Cadillac CTS Sedan is one of the best buys in the luxury segment. Modern style, sporty behavior, and a good combination of features, size, and price--it's a solid package. The CTS Coupe kicks the sport up a notch without sacrificing too much in the way of practicality, and continues to deliver excellent value.

So how, exactly, does the Coupe differ from its four-doored brethren? Wider rear track, wider fenders, more rear tire and slightly stiffer suspension settings make for a more potent handling package. And that package really delivers.

The CTS Coupe, though it looks considerably more compact than the sedan, shares the exact same wheelbase. It looks shorter because it is, thanks to shorter overhangs. It's a bit lighter, but still weighs in close to 3,900 pounds. But you'd never know it in the curves.

Get Up And Go
From the driver's seat, the sport-package-equipped car feels nimble, willing to transfer quickly through twisty mountain roads. Cornering is nearly flat--surprising for a car as heavy as it is, though the wider rear track, firmer damping and stiffer rear anti-roll bar all contribute to the spry performance. Braking is progressive, powerful, and with fair pedal feel. Initial bite from the pads is low at first, but once you get some heat in them, they perform well. The larger wheels of the performance package cars, shod with 245/19 (front) and 275/19 (rear) ContiSport Contact 2 summer peformance tires, also add some of the grip and quick-transitioning ability to the mix.

Both six-speed manual and automatic versions will be available, but we were only able to test the automatic version as the manual is still undergoing final refinement before sales start later this summer. While we raved about the near-telepathic qualities of the six-speed slushbox back when the CTS first came out, it's beginning to show some age in comparison to the dual-clutch gearboxes and eight-speed autos of the competition. The main issues? Occasionally holding a gear too long after the driver gets off the throttle in sport mode, or ending up somewhere between gear ratios in 50-70 mph canyon carving, requiring extra shifts up and down. This is as much a function of the progress of the competition as a shortcoming in the system itself, however.

We only had two real quibbles with the Coupe's performance. Steering, while responsive, is a bit light, and without the feel you'd want to really push the car to the limit. But it's a solid compromise between easy city cruising, parking effort, and 7/10ths spirited driving.

The Coupe is equipped standard with the 3.6-liter, 304-horsepower direct-injection V-6 engine that's an upgrade option in the sedan. But we couldn't help but feel it would benefit from another 50 horsepower or so--perhaps one of the few indications of the car's weight from behind the wheel. That problem will no doubt be solved and then some with the CTS-V Coupe, but we could still do with a bit more grunt in the standard car as well.

Chill Out And Cruise
Inside the CTS Coupe's cabin, those familiar with the CTS Sedan won't find much new. Standard door handles are replaced by electronic push-button operated units like those found on the Corvette, keeping the exterior sleek and smoothing out the look of the interior as well.

Cut-and-sew leather throughout the cabin delivers a luxury look and feel, though it doesn't quite rise up to Mercedes-Benz or Audi standards in all respects. The plasticky surround of the center stack in particular looks a bit out of place considering the concept-car exterior and otherwise sharp interior.

Comfort is good up front, though a slight bulge in the upper seatback due to revised active headrest functionality takes some getting used to. Cadillac's people said that would be resolved with a redesigned seat due out this fall. Bolstering could also be a bit better, as the nearly flat seat bottoms provide little support in aggressive driving, but the ingress-egress equation for Cadillac's typical buyer might play the predominant role here. Cabin noise is very low, with even wind noise not intruding on the proceedings at freeway cruising speeds. Tire noise from the performance-spec summer donuts is noticeable, but it's not annoying.

We didn't spend much time fiddling with the audio and infotainment functions, preferring instead to take in the car's more visceral pleasures, but when we did, we had no complaints. The navigation system in particular was easy-to-use, accurate, and quick to adjust when we deviated from the prescribed route. We also didn't spend much time in the back seat, and it's certainly not intended to contain six-foot-plus adults, but it would be more than adequate for kids or smaller adults over shorter distances.

On the whole, the experience inside the cabin is refined, even the performance package cars smooth and compliant around town.

First-Drive Verdict
Priced to start at just $38,990 for the rear-wheel-drive model and $40,890 for the all-wheel version, the Coupe is a bargain for the cost-conscious entry-luxury buyer. You pay 3-Series prices to get a 5-Series-sized car with solid performance and some of the most unique styling in the industry.

But toss in the (in our opinion must-have) $4,440 performance package and a full set of tech and convenience features and the price can rise into the lower $50,000s rather quickly. That's a bit less attractive when compared to the 3-Series and C-Class the CTS often finds itself paired against, but it's a full-spec car as opposed to an entry- or mid-range model--and it's really the size of the E-Class Coupe.

On the whole, despite our handful of minor issues with the car's performance, we were surprised at how good an overall package the 2011 CTS Coupe presented over our day with it in the California hills, and we'd be hard-pressed to find a car that hits so many buttons so well for the price.