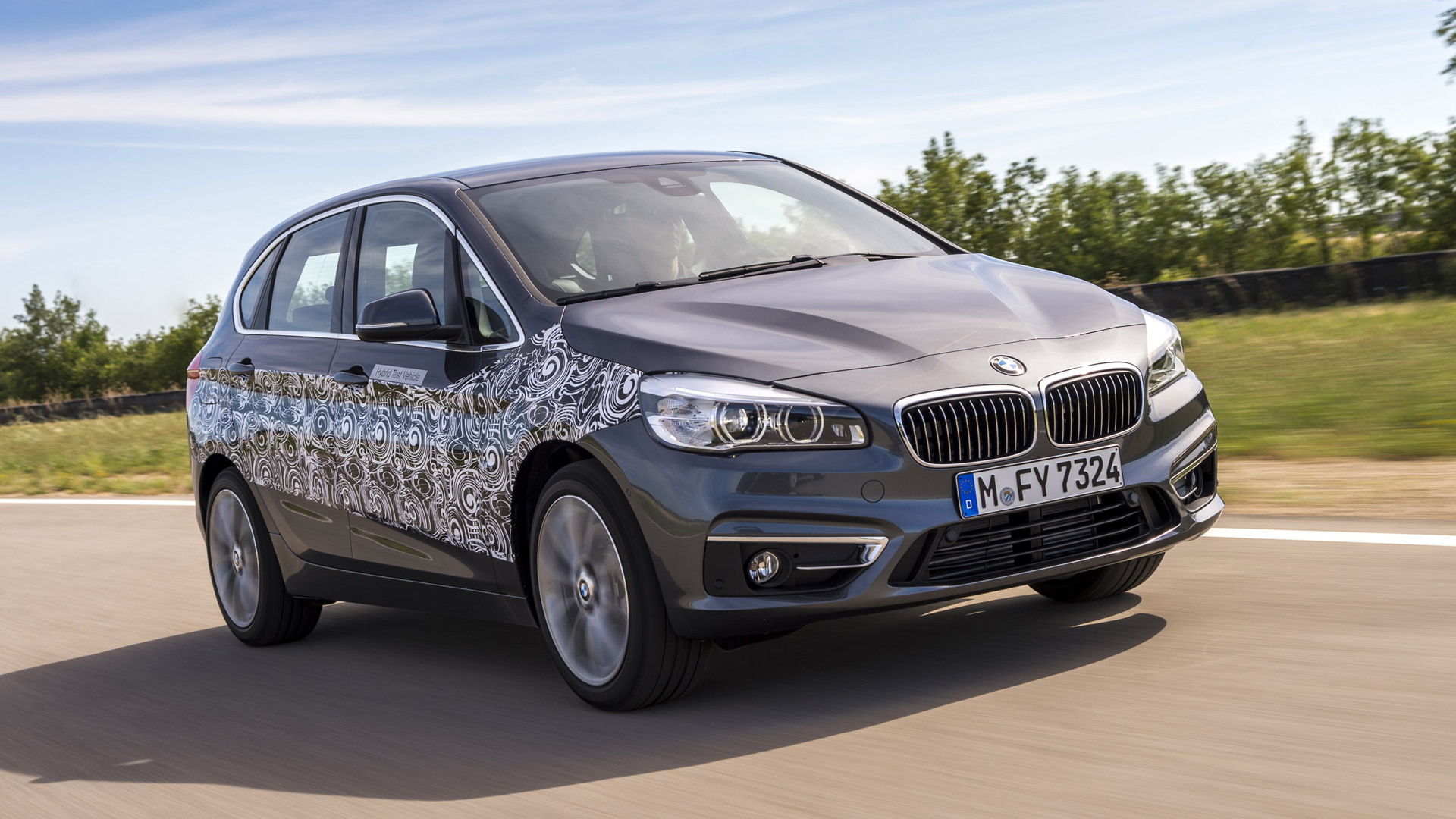 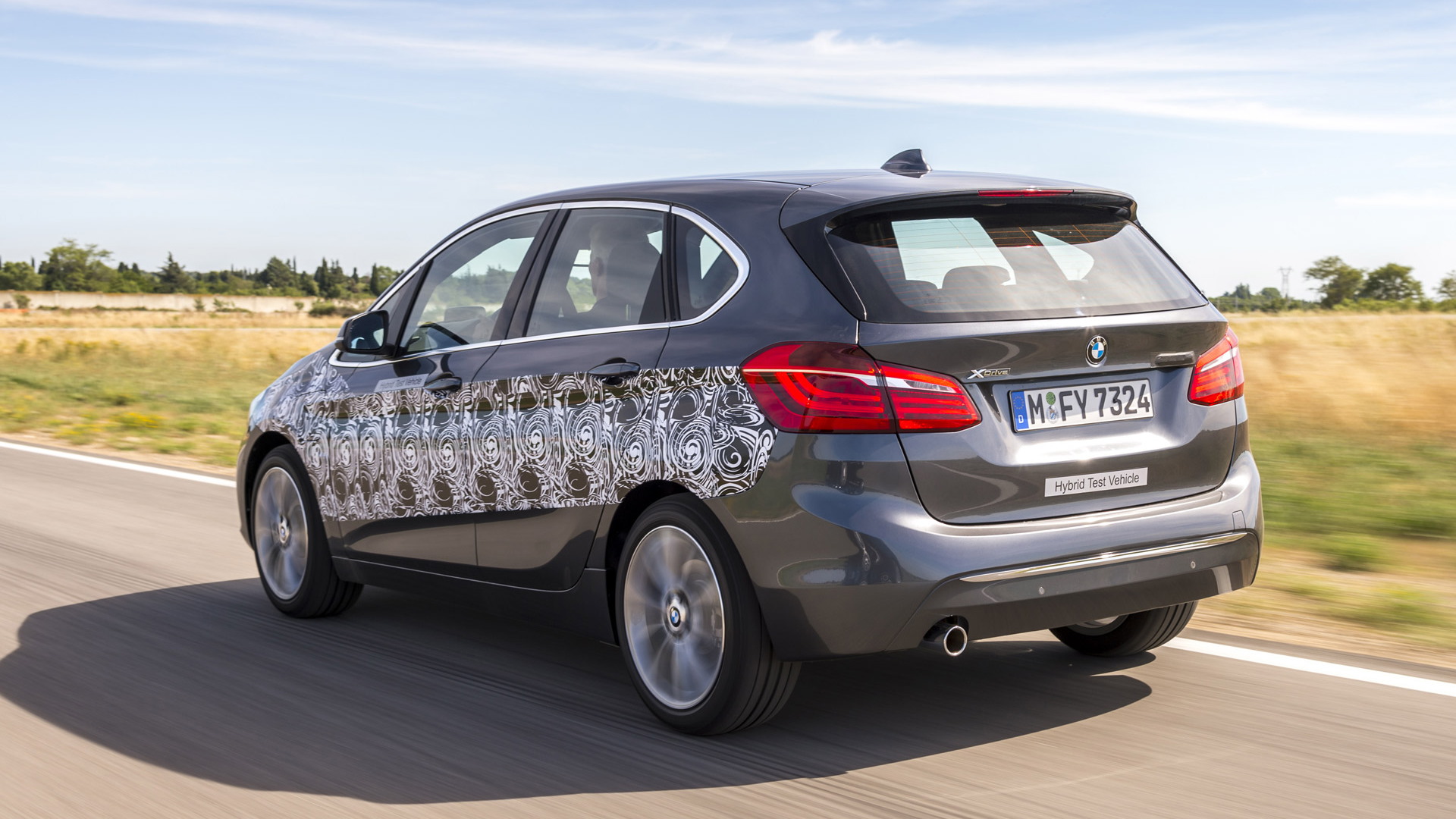 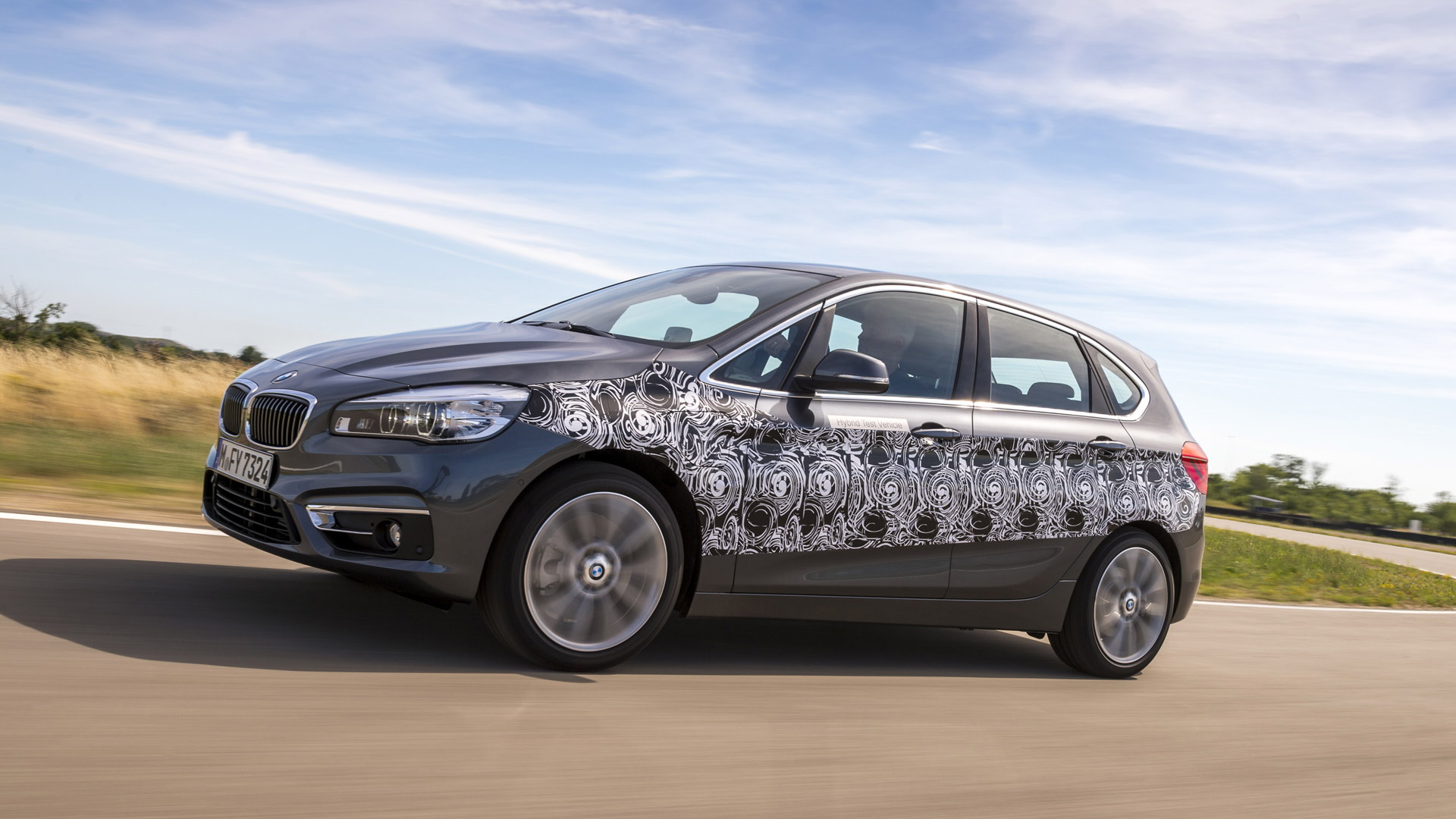 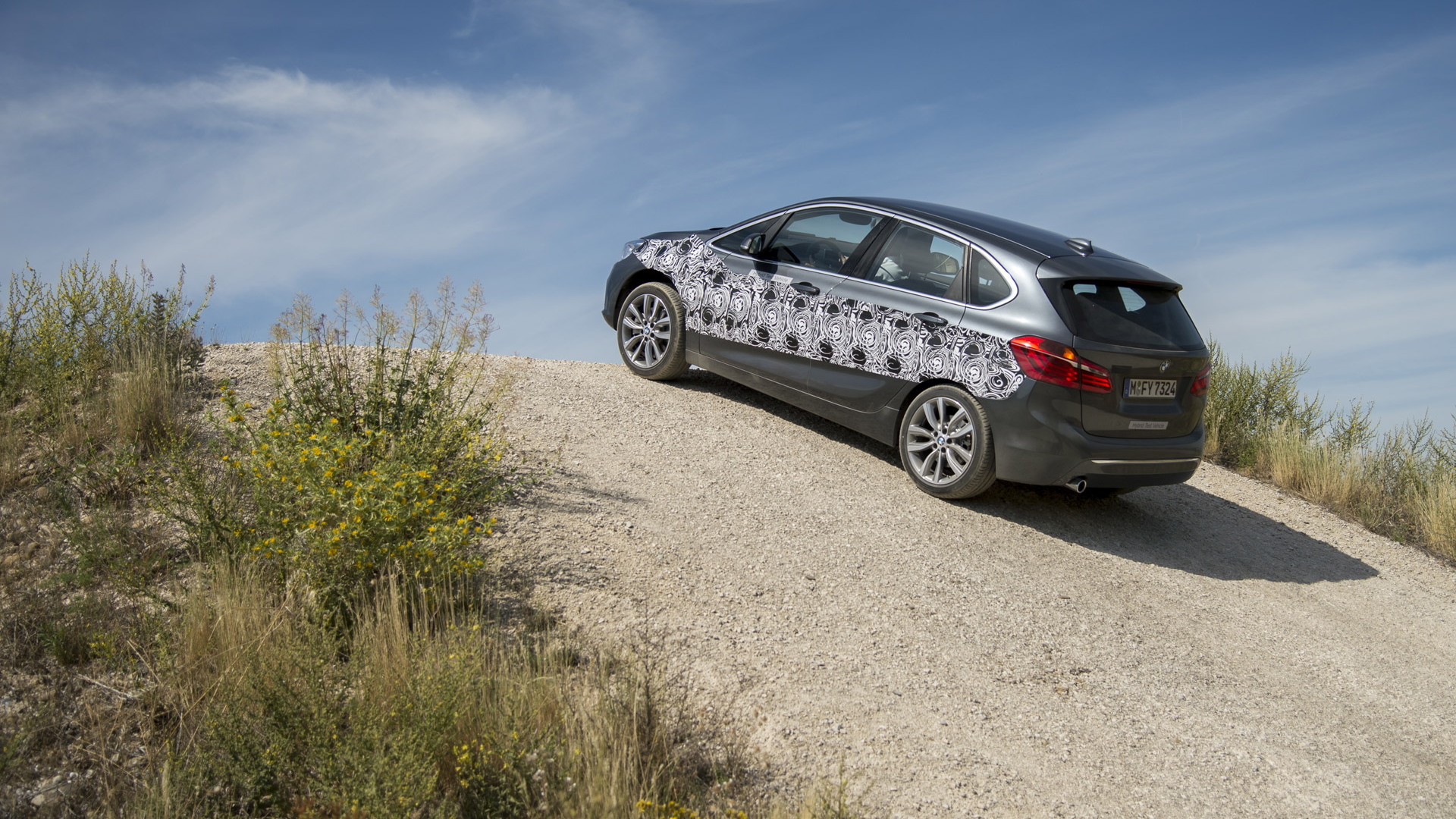 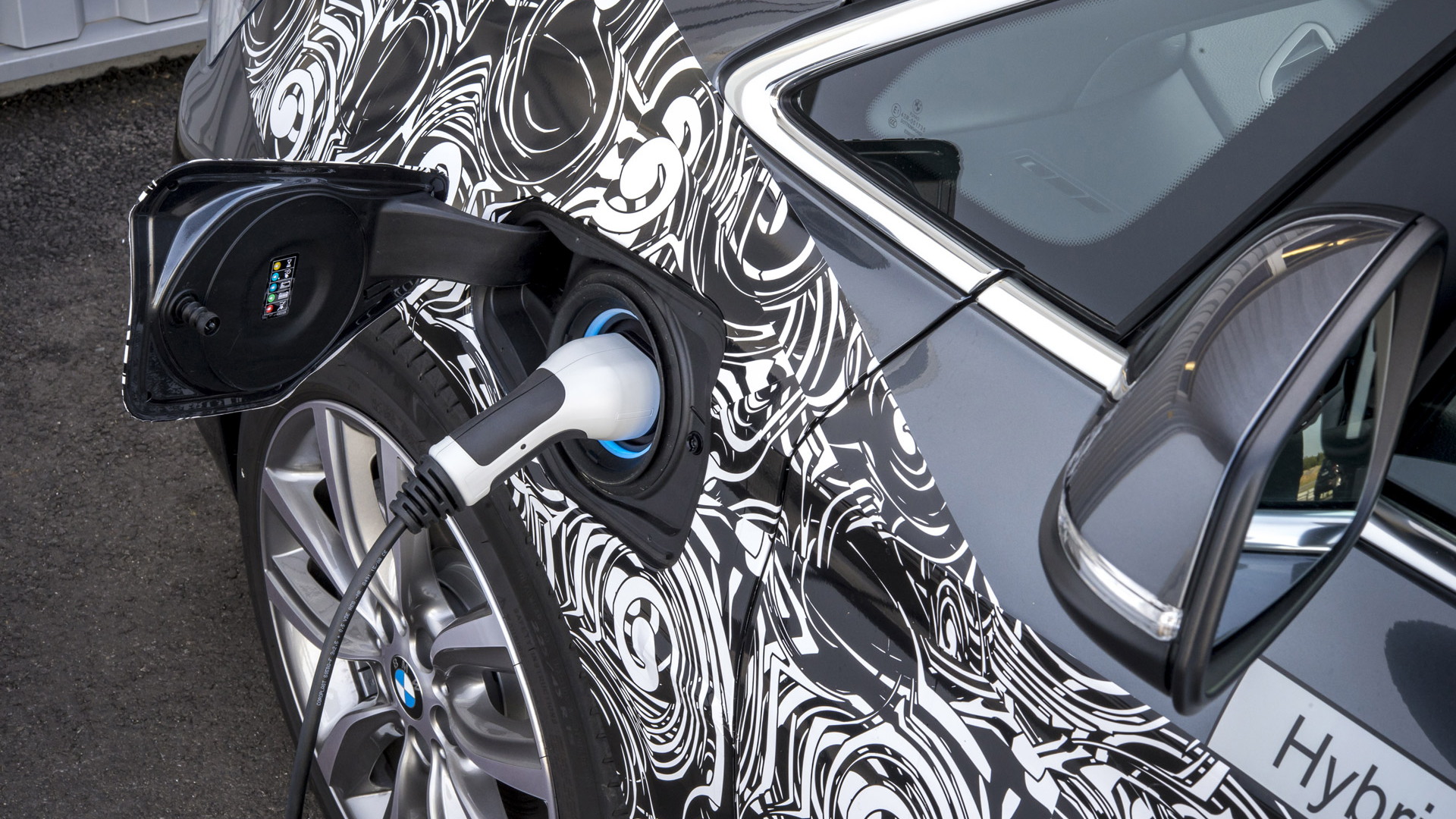 When BMW first previewed its 2-Series Active Tourer back in 2012 with the Concept Active Tourer, it chose to fit the vehicle with a plug-in hybrid powertrain, suggesting that a gasoline-electric setup would be offered in the production version. Now we’re getting our first look at the plug-in 2-Series AT in the form of a prototype version unveiled at a BMW technology demo this week in France. It’s where we also saw the hydrogen fuel cell-equipped i8 and 5-Series Gran Turismo.

Unlike the fuel cell cars, this 2-Series AT plug-in hybrid is destined for production. It should go on sale next year in most markets where the regular 2-Series AT and seven-seat 2-Series Gran Tourer are offered, which means we won’t be seeing it here in the United States. Nevertheless, the technology hints at what’s in store for future BMW Group powertrains and may even feature in some MINI models in the near future. Remember, BMW’s 2-Series AT is based on the front-wheel-drive UKL platform utilized by MINI.

The general layout of the plug-in hybrid system shown here is similar to the setup in the i8 sports car, only it’s flipped in reverse. A turbocharged 1.5-liter three-cylinder gasoline engine paired with a six-speed automatic is used to power the front wheels while an electric motor powers the rear pair, resulting in a ‘through-the-road’ hybrid all-wheel-drive system.  Of course, the electric motor is powerful enough to drive the car on its own, with the driving range said to be about 23 miles in this mode.

The engine is rated at 134 horsepower and 162 pound-feet of torque while the electric motor is good for 87 hp and 122 lb-ft of torque. Note, the engine also has a small motor-generator attached to it. This motor-generator is normally used to charge the battery, either by drawing power from the engine or from wasted brake energy, but during high-load situations it can also add an extra 20 hp for brief periods. The motor-generator also serves as an engine stop-start system to further reduce fuel use. With all systems working, the 2-Series AT plug-in hybrid will accelerate from 0-62 mph in about 6.5 seconds. Fuel economy, meanwhile, is said to approach 117 mpge.

When on the move, the car’s electronic systems can distribute drive to the front wheels, rear wheels or all four as required. A driving mode selector is also fitted to the car, allowing the driver to adjust the experience from eco to sporty.

While the U.S. misses out on the 2-Series AT plug-in hybrid, fans of the technology have other options. Plug-in hybrid versions of the 3-Series, new 7-Series and the X5 SUV are all due to go on sale next year. You’ll be able to recognize the cars by the “eDrive” badge on their trunk lids.