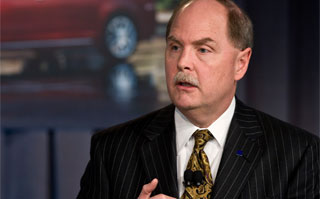 At its monthly meeting in Detroit today, the General Motors board of directors accepted the resignation of Fritz Henderson as director, president and CEO of the company.

Replacing him temporarily until a successor can be found will be Ed Whitacre, the current chairman of the board. Henderson had been on the job less than a year after the controversial resignation of previous CEO Rick Wagoner, but during his short stint he has led the company through an unprecedented period of challenge and change.

The Board will immediately embark on a search for a successor, offering them the chance to bring in someone from outside the auto industry. Ford Motor Co. did the same thing four years ago, when it hired Alan Mulally from Boeing.

"We all agreed changes needed to be made," Whitacre said in a very short press conference. "We are united and committed to the task we have at hand," which is to "accelerate our progress" toward profitability and repaying the U.S. and Canadian taxpayers who have funded this spring's GM bailout after its 40-day bankruptcy.