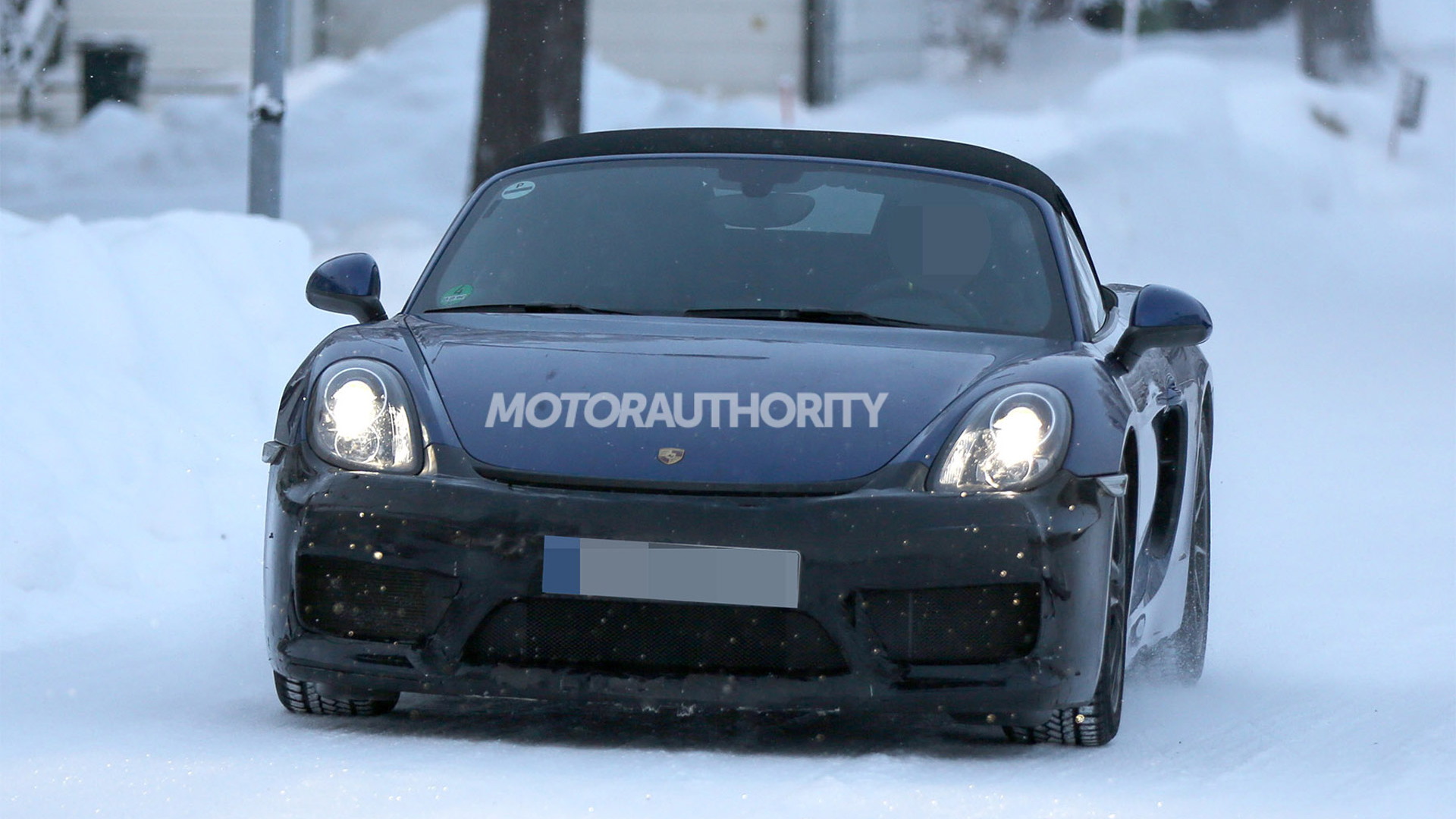 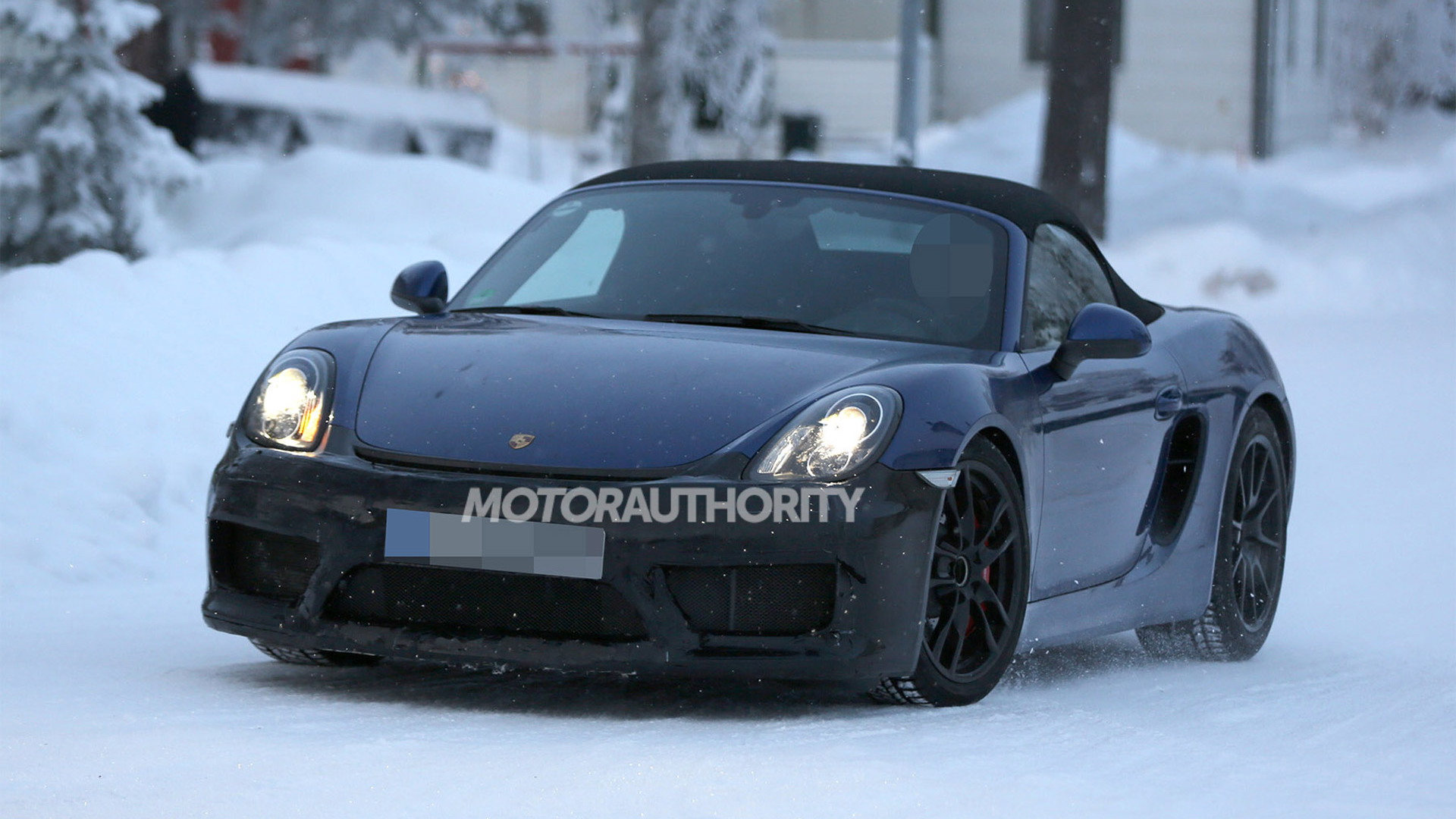 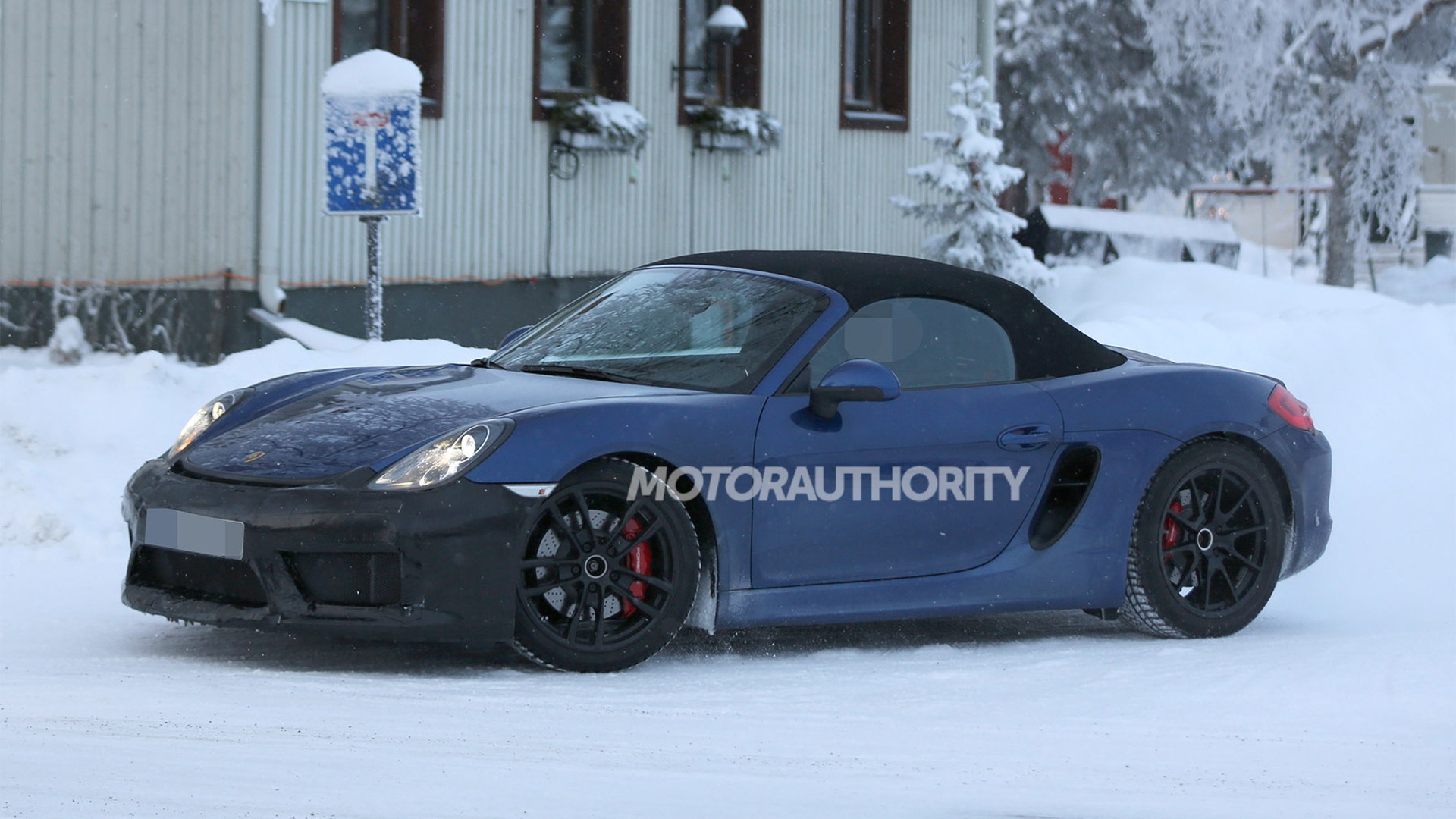 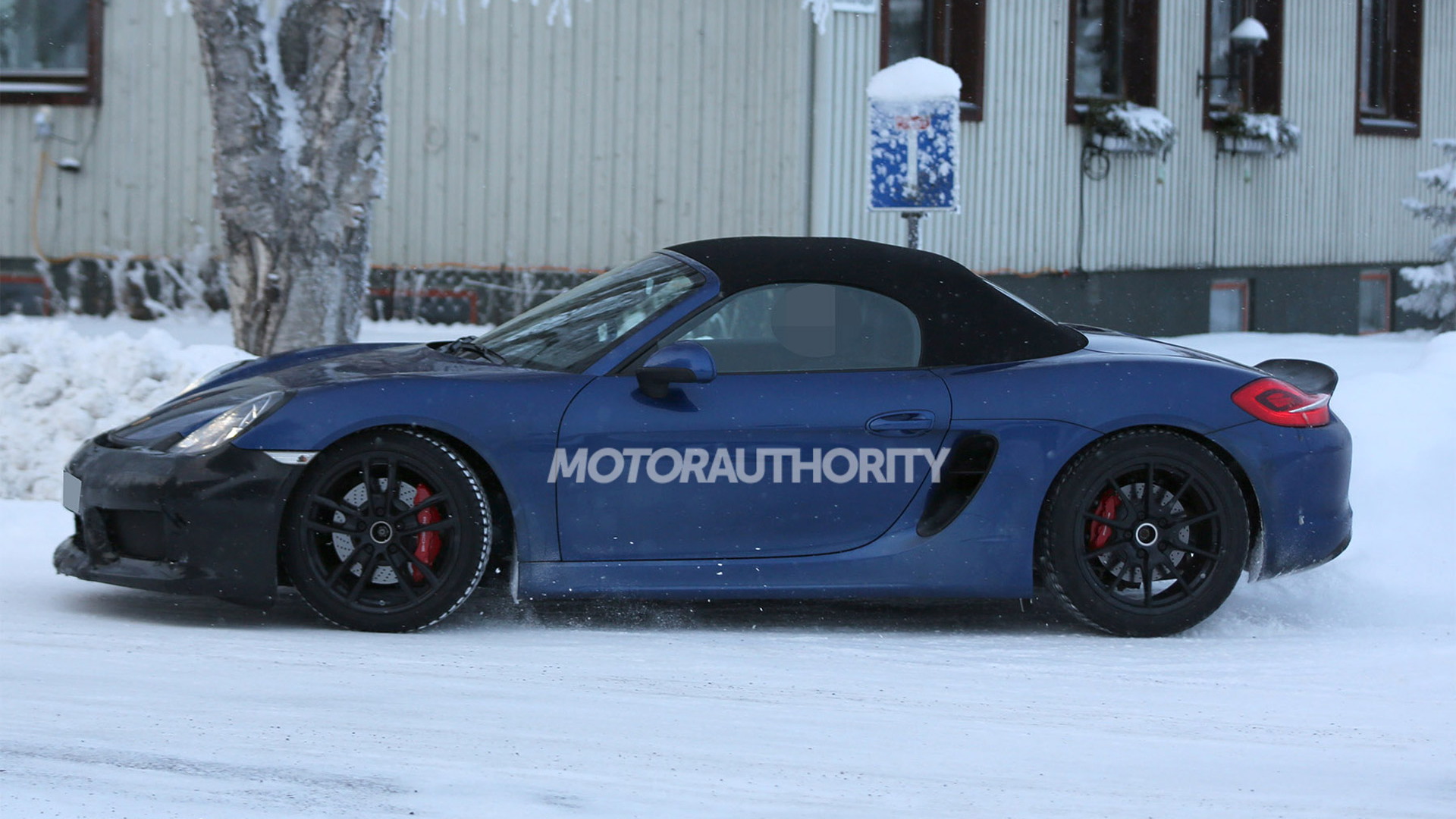 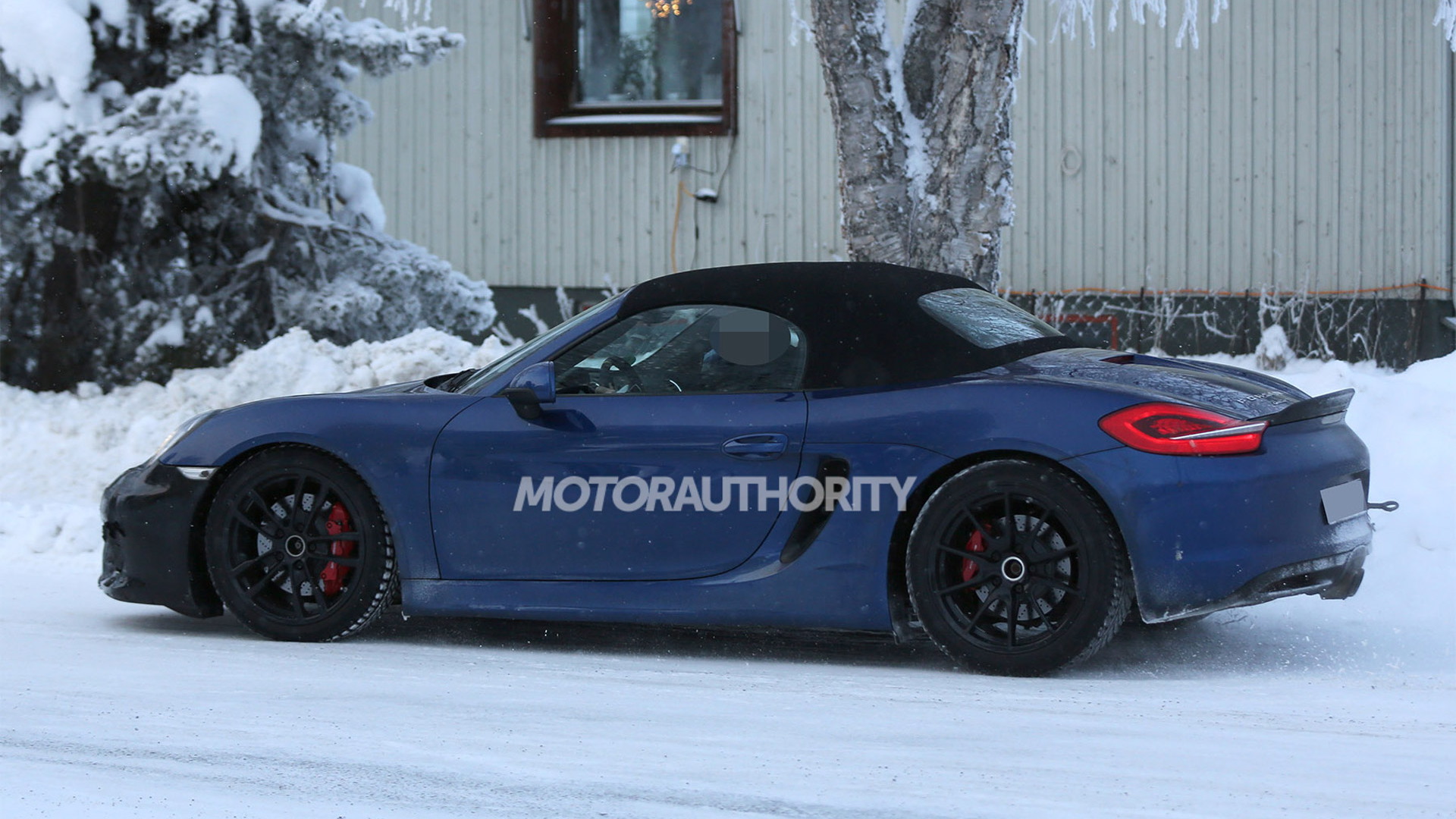 12
photos
Porsche’s hottest Boxster at present is the 330-horsepower GTS but soon we could see the German automaker introduce an even more potent version packing many of the upgrades developed for a track-focused Cayman GT4 also in the works. A new Boxster prototype has been spotted undergoing cold-weather testing and it's wearing the same aggressive front bumper found on prototypes for the Cayman GT4. It also features an additional intake at the leading edge of the hood and at the rear a large wing spoiler can be seen.

In addition to these external mods, we should see beefier mechanicals installed. Expect power to come from the 3.4-liter flat-six fitted to the Boxster GTS but with output dialed to around 380 hp. Upgraded wheels, brakes, tires and suspension should all be part of the package too, along with some weight-saving mods like a stripped cabin and carbon fiber components. A six-speed manual should be the standard transmission, with Porsche’s seven-speed PDK dual-clutch unit offered as an option.

We’re not expecting this hardcore Boxster to carry GT4 badging; instead, we’re likely to see Porsche dig up a name from its past, such as RS Spyder. The last Boxster to be called an RS Spyder was 2007’s Boxster RS 60 Spyder, which celebrated the 718 RS 60 Spyder race car of the 1960s.

Look for the new Boxster variant, whatever it’s called, to be revealed towards the end of the year. Sales should commence in the first half of 2016 and pricing will almost certainly exceed the $74,495 starting price of the Boxster GTS. We think a figure closer to $100k is likely.

The launch of the new Boxster variant and its Cayman GT4 sibling will mark the last hurrah for the current Boxster and Cayman before they undergo their mid-cycle facelift sometime next year. We hear that the updated cars may come exclusively with four-cylinder power. In fact, Boxster and Cayman prototypes with four-cylinder engines have already been spotted at the ‘Ring.