';
General Motors has earned a lot of brownie points with its Volt plug-in hybrid, which showed that the world’s largest carmaker is serious about building electric vehicles again. Ford has now upped the ante by combining the latest trend of plug-in technology with a zero-emissions hydrogen fuel cell. Labeled the Flexible Series Hybrid Edge, the vehicle is touted as the world's first drivable fuel cell hybrid electric vehicle with plug-in capability and is built off Ford’s Edge crossover platform.

The decision to use the existing edge platform provides Ford with "the ultimate in flexibility in researching advanced propulsion technology," says Ford's vice president of research and advanced engineering Gerhard Schmidt. "We could take the fuel cell power system out and replace it with a downsized diesel, gasoline engine or any other powertrain connected to a small electric generator to make electricity like the fuel cell does now," added Schmidt.

The release of Ford’s new plug-in fuel cell at an auto show in the US capitol ties in with President Bush's upcoming State of the Union address, which will cover energy related issues that concern the auto industry. Ford is just the latest company in pursuit of plug-in hybrid technology. GM claims that its Volt concept is capable of traveling 40 miles on the battery alone and than 600 miles with a gas engine, whereas Ford’s new Edge plug-in only manages 25 miles on 'battery only' mode. When power drops to 40%, the fuel cell kicks in and charges the battery for 200 more miles of range.

The plug-in hybrid is powered by a 336-volt lithium-ion battery pack that takes roughly 8 hours to fully charge. The company is yet to confirm the vehicle for production, but cited that the cost of lithium-ion batteries and lack of hydrogen infrastructure is still a major issue. 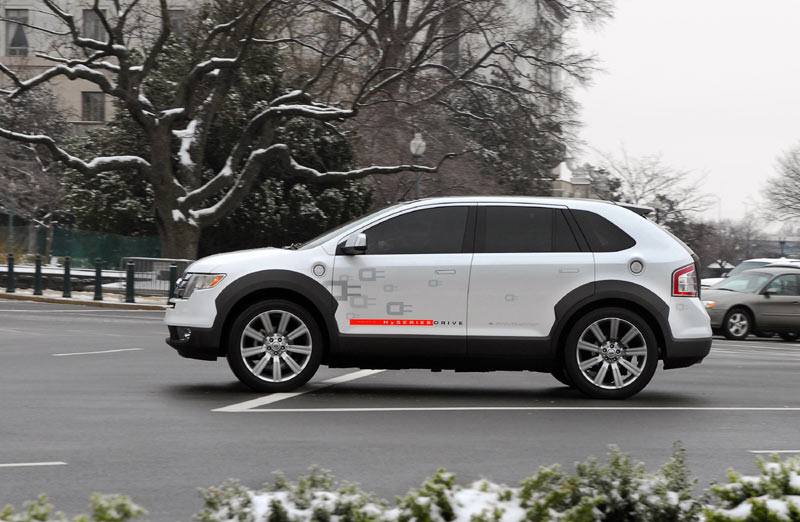 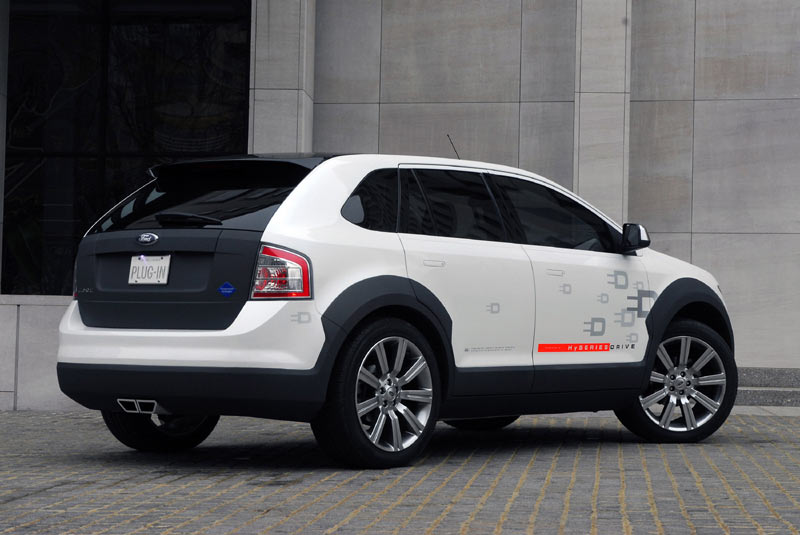 Full press release after the jump.

* Ford’s flexible powertrain architecture enables the use of new fuel and propulsion technologies as they develop without redesigning the vehicle and its control systems.

* The HySeries Drive technology is able to operate using a fuel cell, small gasoline or diesel engine connected to an electric generator to make electricity.

WASHINGTON, D.C., Jan. 23, 2007 – Ford Motor Company [NYSE: F] today unveiled the world’s first drivable fuel cell hybrid electric plug-in that combines an onboard hydrogen fuel cell generator with lithium-ion batteries to deliver more than 41 mpg with zero emissions. The vehicle is built on a flexible powertrain architecture that will enable Ford to use new fuel and propulsion technologies as they develop without redesigning the vehicle.

“This vehicle offers Ford the ultimate in flexibility in researching advanced propulsion technology,” said Gerhard Schmidt, vice president of research and advanced engineering for Ford Motor Company. “We could take the fuel cell power system out and replace it with a down-sized diesel, gasoline engine or any other powertrain connected to a small electric generator to make electricity like the fuel cell does now.”

The new HySeries Drive™ powertrain featured in a Ford Edge uses a real-world version of the powerplant envisioned in the Ford Airstream concept unveiled earlier this month at the 2007 North American International Auto Show in Detroit. The HySeries Drive powertrain delivers a combined city/highway gasoline equivalent fuel economy rating of 41 mpg. For those who drive less than 50 miles each day, the average jumps to more than 80 mpg.

“We wanted to take what was in a ‘gee whiz’ vehicle like the Airstream and connect it with something people are driving on the road today, something that wasn’t just a futuristic concept vehicle,” Schmidt said.

The plug-in hybrid is powered by a 336-volt lithium-ion battery pack at all times. The vehicle drives the first 25 miles each day on stored electricity alone, after which the fuel cell begins operating to keep the battery pack charged. This provides another 200 miles of range for a total of 225 miles with zero emissions. Individual experiences will vary widely and can stretch out the time between fill-ups to more than 400 miles: drivers with modest daily needs would need to refuel only rarely, drivers who travel less than 50 miles each day will see fuel economy well over 80 mpg, while those with long daily commutes will see somewhat lower numbers as the fuel cell must run a larger fraction of the time.

The Ford Edge with HySeries Drive can travel at speeds of up to 85 mph. An on-board charger (110/220 VAC) can refresh the battery pack when a standard home outlet is available, making the concept a true plug-in hybrid.

When the battery pack is depleted to approximately 40 percent, the hydrogen fuel cell – supplied by Ford partner Ballard – automatically turns on and begins generating electricity to recharge the batteries. Like a conventional automobile, the Ford Edge with HySeries Drive will go until it runs out of fuel – in this case via a 350-bar hydrogen tank that supplies 4.5 kg of useable hydrogen.

The HySeries Drive name is derived from the powertrain’s structure: a hydrogen fuel-cell-powered series hybrid drivetrain. This highly innovative approach reduces the size, weight, cost and complexity of a conventional fuel cell system by more than 50 percent. It also promises to more than double the lifetime of the fuel cell stack.