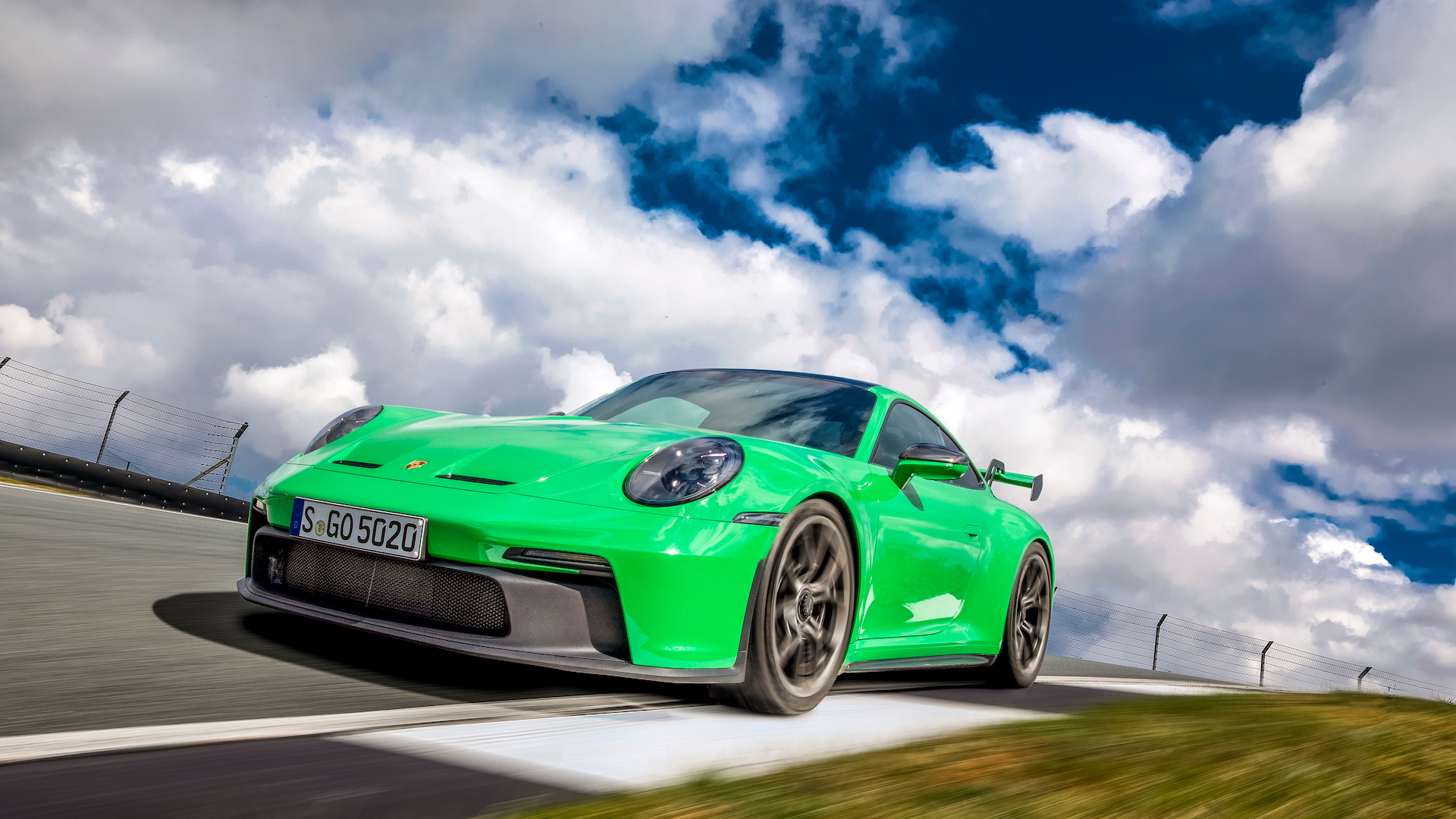 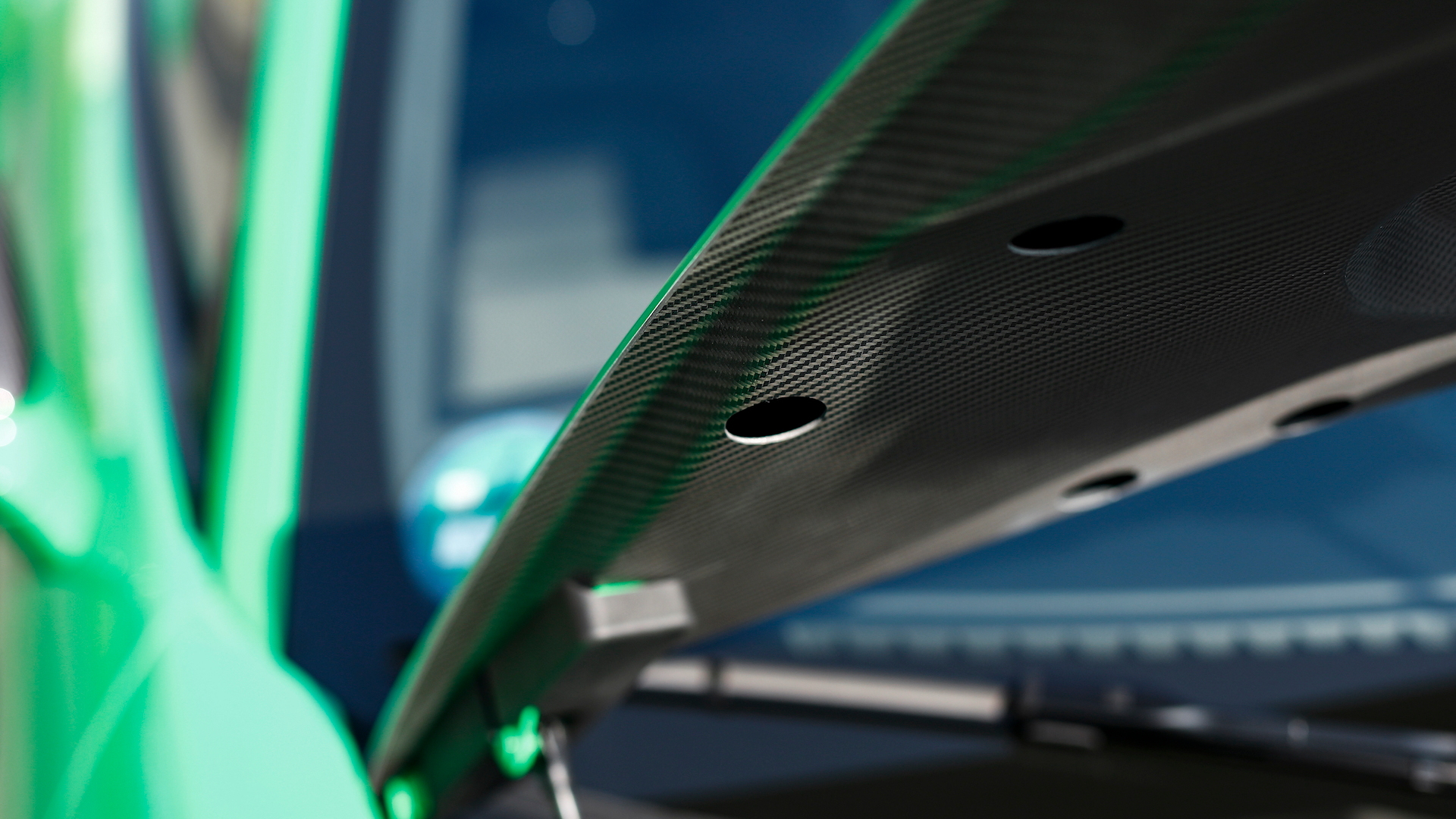 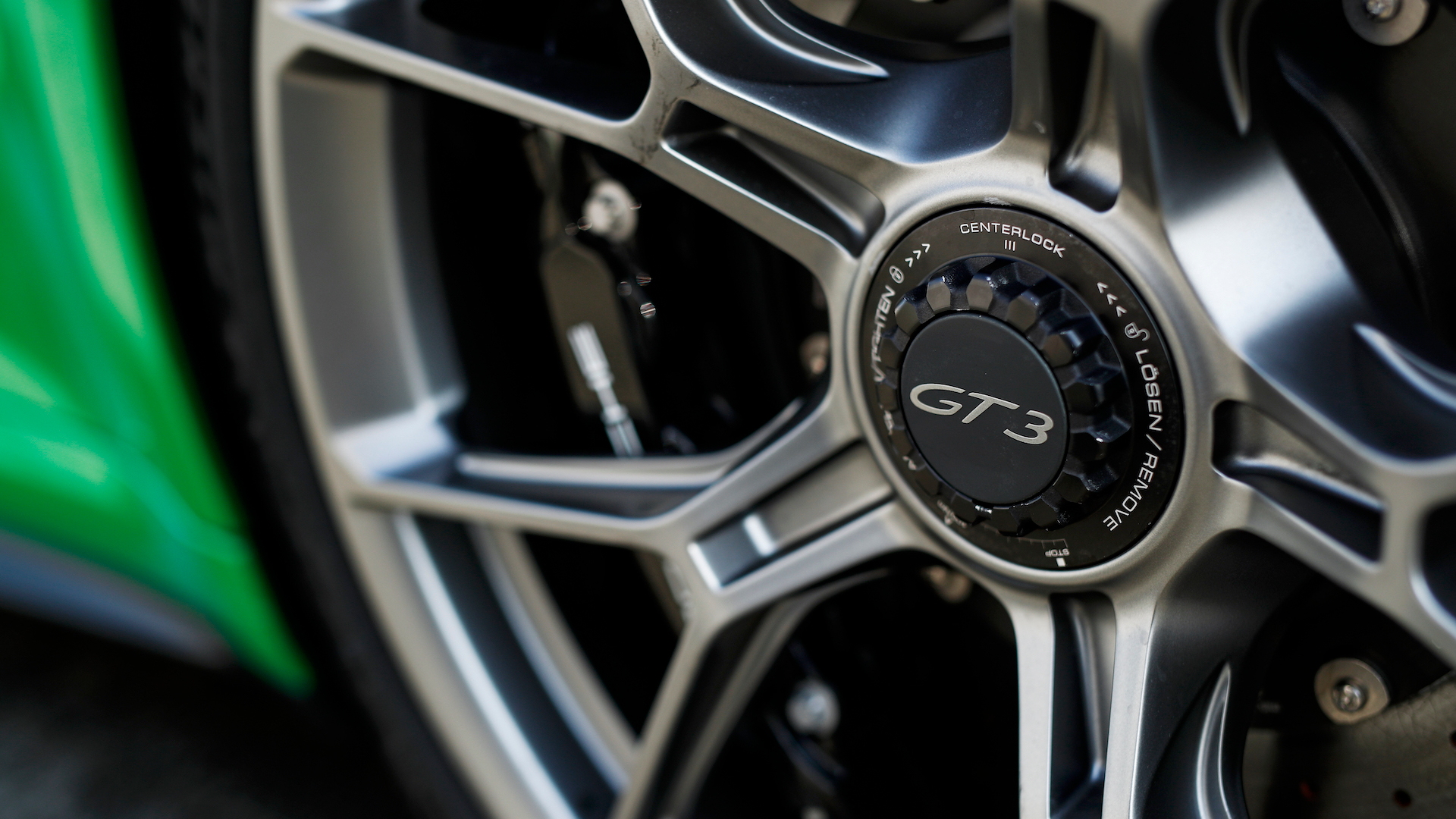 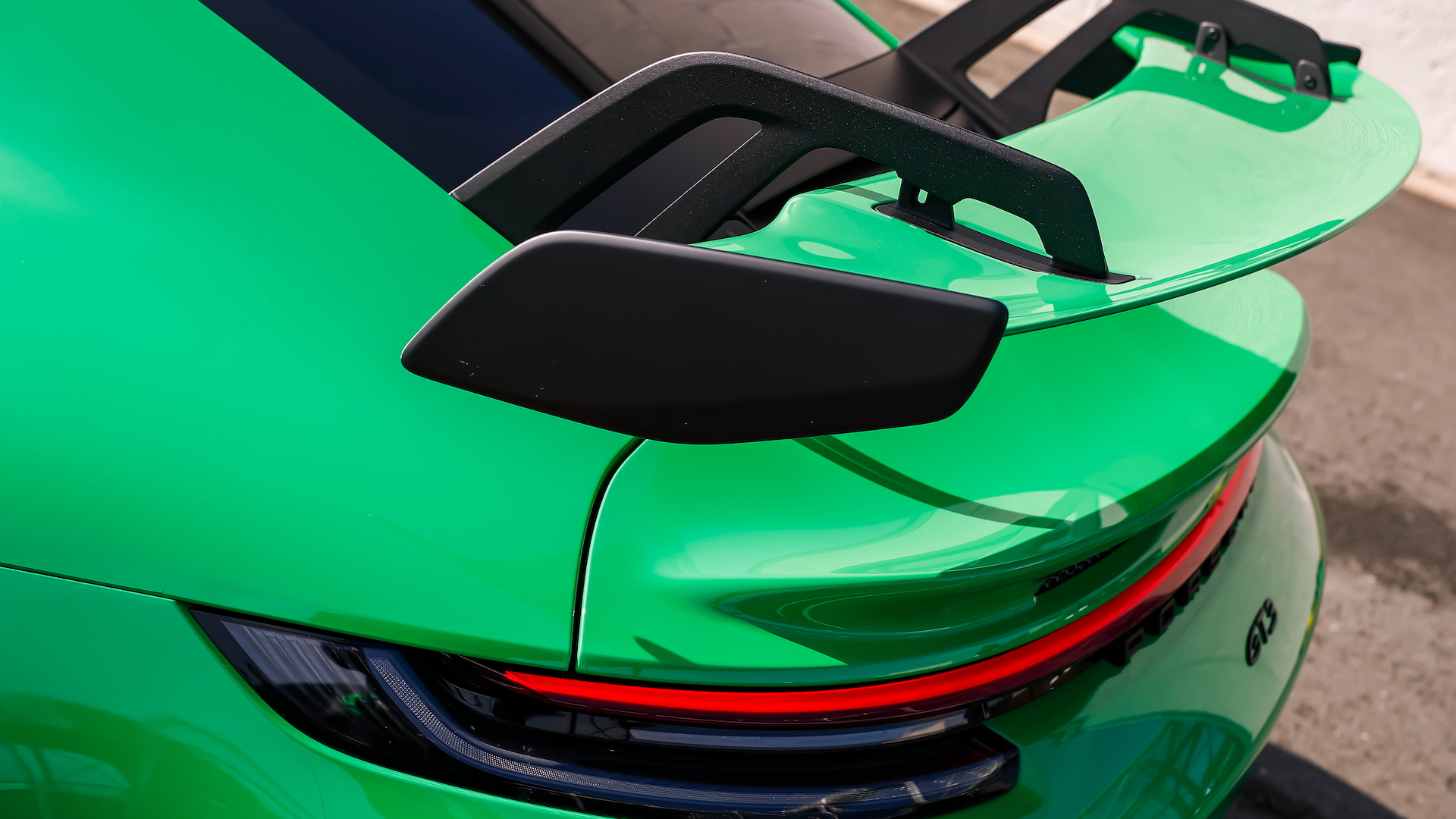 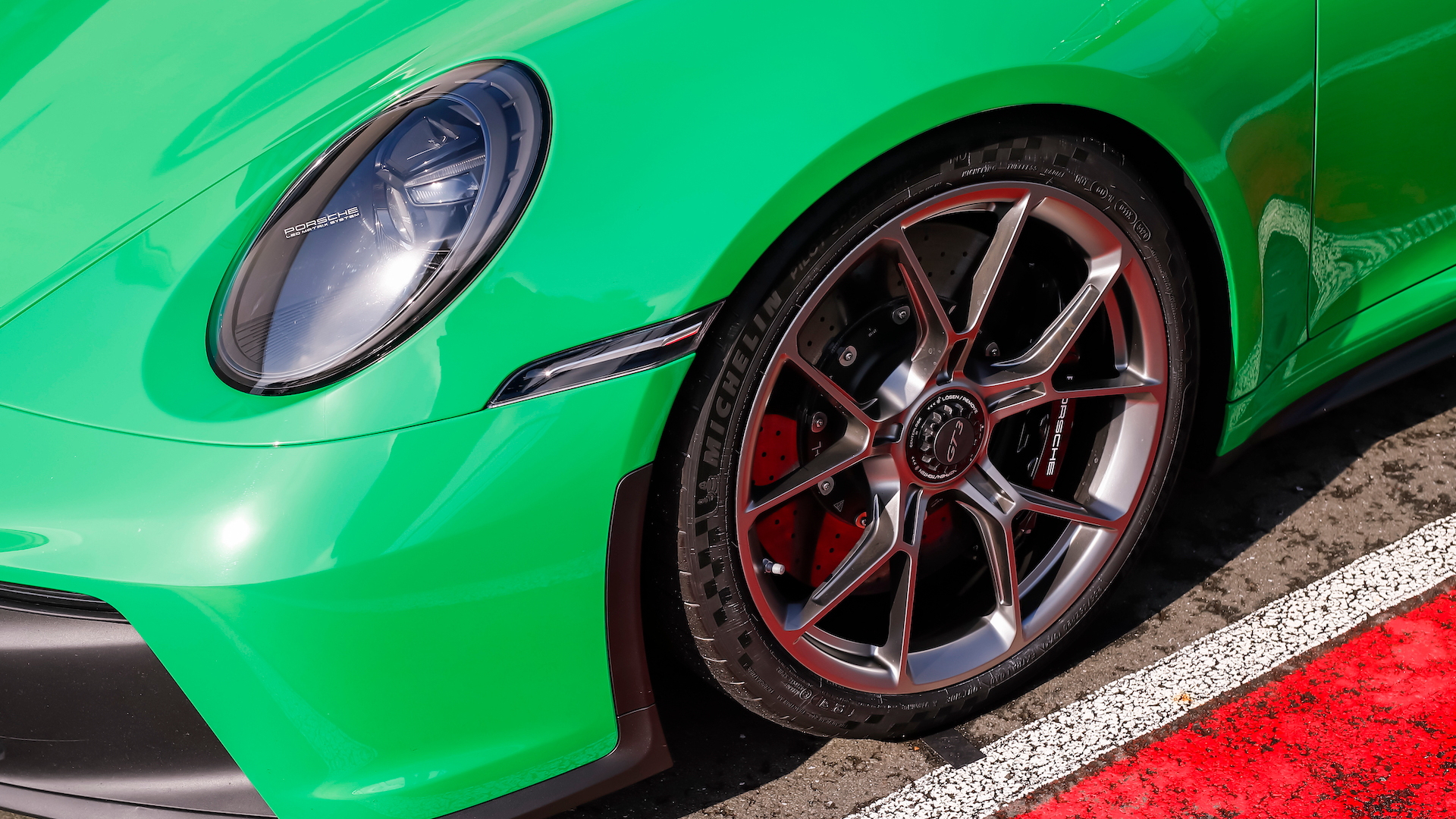 The “green hell” of the Nürburgring is cool, but have you ever tried to cauterize the equally kinky roads in your own backyard in a 502-hp hero-maker with balletic feet and the heart of a killer?

You have if you’ve driven the 2022 Porsche 911 GT3, a cymbal-clash of a supercar that’s been destined for Halls of Fame and Garage Mahals worldwide ever since its debut. The GT3 serves up the best kind of sensory overload, particularly when it’s endowed with two very important bits: a 6-speed manual shifter and a coat of Python Green paint that delivers its mission statement in its simply perfect hue.

Want to take the metaphor to its most painfully obvious zenith? The GT3 has a snakelike ability to move across dimensions with slithering ease. Its sinister rep’s mostly overblown. Its natural beauty must be studied before it can be appreciated. It can also  scare the living shit out of the unprepared. All those feels erupt whenever you wring all the glory from the manual-shift GT3 in Porsche’s U.S. home of Georgia.

The GT3’s calling card is its 502-hp flat-6, but its essence is unflappable handling.

Key this 911 to life and everything that’s green—the trees, the hills, the grass, the car—turns into a whizzy, exhilarating blur.

Muscular and angry when it has to be and docile the rest of the time, this banner-carrying 911 does a Hulk turn as I cajole it out of deeply valleyed parking lots outside of Atlanta. The nose-lift helps coax it safely to the street, without scraping any of its skin, but then a slip of throttle reminds me of what’s underfoot, and what’s to come.

Once we clear exurbia, it’s off to the races—or to the chorale performance, one delivered by its mellifluous flat-6. With 502 hp and 346 lb-ft of torque, up just 2 hp and 7 lb-ft of torque from the last GT3, the current car’s punch-drunk with power once it moves a few millimeters off position zero. From 4.0 liters of displacement and 9,000 rpm of bandwidth, the GT3 extracts a sonorous rasp that elevates its top end while it shaves some low-end response. It’s a car meant to move with authority at triple-digit speeds and beyond.

I don’t need to preach to the choir as the four-lane turns to two. The GT3 sings to the rafters, which in this case are occupied by a few lunatic squirrels and a skunk that commutes across my favorite semi-rural road with the same kind of existential dread as I do when I sign on to Twitter every morning.

Porsche’s PDK will never get left on read by me, but in this case the transmission is the special, catch-it-while-it-lasts moment. The 6-speed manual has the top-over thunk into gear that resonates deep in any driver’s heart, while the left pedal lets you tap out coded messages to the clutch with deft precision. The ballet slows things down—0-60 mph takes 3.7 seconds, versus the dual-clutch transmission’s scorching 3.2 seconds—but if you believe in things like organic produce and longform stories, the manual reels off sensual pleasures that the PDK shifter just can’t. It’s the difference between a video game and a crossword puzzle: different skill sets, different pleasure centers.

It’s a 6-speed, not a 7-speed, but we’ll color you green with envy anyway.

Skitter off the wider two-lanes on to thread-thin roads meant to link logging towns to mining towns, and the GT3 manual reveals itself to be the pot of gold. It tones down its own power for launches, so the local gas-station owners don’t grow any more wary than they already are, thanks to the electric paint job and the lunch-table wing growing out of the rear end. Its Michelin Sport Cup 2 tires barely emit a sound each time I creep from a start, which I do a few times to generate the silly grip and grin the GT3 manufactures like widgets.

At 3,126 lb, the 6-speed manual GT3 has an easier time than some of the electric cars I’ve wheedled through these same passages. As wide as this generation of 911 is, the car still needles through unstriped roads with sewing-machine precision. Lots of factors tie its ride and handling together differently than other 911 variants, but its relatively light weight (it’s gained just 11 lb from the last-gen GT3), its reworked double-wishbone front suspension, and its affable steering get the credit. More stable feel—thanks to wider 20-inch front and 21-inch rear tires—pours more glue on the road, and the GT3 turns in with crisp snaps of attention as it salutes the corner and then barks at you when you power out of it. Porsche’s electric-motor steering sets a benchmark for feedback and smoothed-over variable-ratio output.

The sticky GT3 owes a lot to more extravagant layers of bodywork. A front diffuser and adjustable spoiler that toggle between road and track modes pile on to boost downforce by 50% in daily-runner position—and up to 150% in performance position. So much glue. (If you want fancy performance with a less visible wing, try a GT3 Touring with the retractable spoiler.) As for braking? Never a moment of fear as long as you know how Salmon P. Chase looks. The carbon-ceramic package for the 911 GT3 renders nearly every situation stoppable.

If you want something not so positive to fixate on, well, the GT3 can be stiff and unrelenting—and much of that comes from available carbon-fiber bucket seats that don’t exactly render this a Panamera Gran Turismo. The welter of digital displays get cut comically in shards by the steering wheel, just like the rearward view.

The GT3 calls the track home, but everyday roads call out its inner supercar, too.

You could try to convince me there’s a better 911 out there, just keep in mind it’s OK to be wrong. Few cars tap the visceral supercar feel without the abusive supercar ride and upper-body strength requirements—and even fewer tell your fingertips exactly what to do, and for how long. Even the stratospheric price doesn’t seem morally wrong. You have two kidneys, after all.

It’s not a car that confines its thrills to a selected handful of privateer tracks and closed-off roads, either. The swarthy hills of Germany might be a better place to experience all this, but why leave the country when you have pure-green country roads at your back door? It’s an apex predator, maybe the apex of the 911 lineup until the GT3 race car appears; the Python Green blends in perfectly with the verdant north Georgia hills, and lets the 911 GT3 tuck away and hide before its next strike.

Put another way, the Nürburgring is great, but have you ever hustled down a blind path and shut down the car quickly while your heart races and you half-expect a county cop to J-turn in behind you with, ah, questions? Same.

Porsche slipped us a Python Green GT3 with a manual gearbox so we could write this test drive review and simultaneously humblebrag about how many people will never get to enjoy this car.