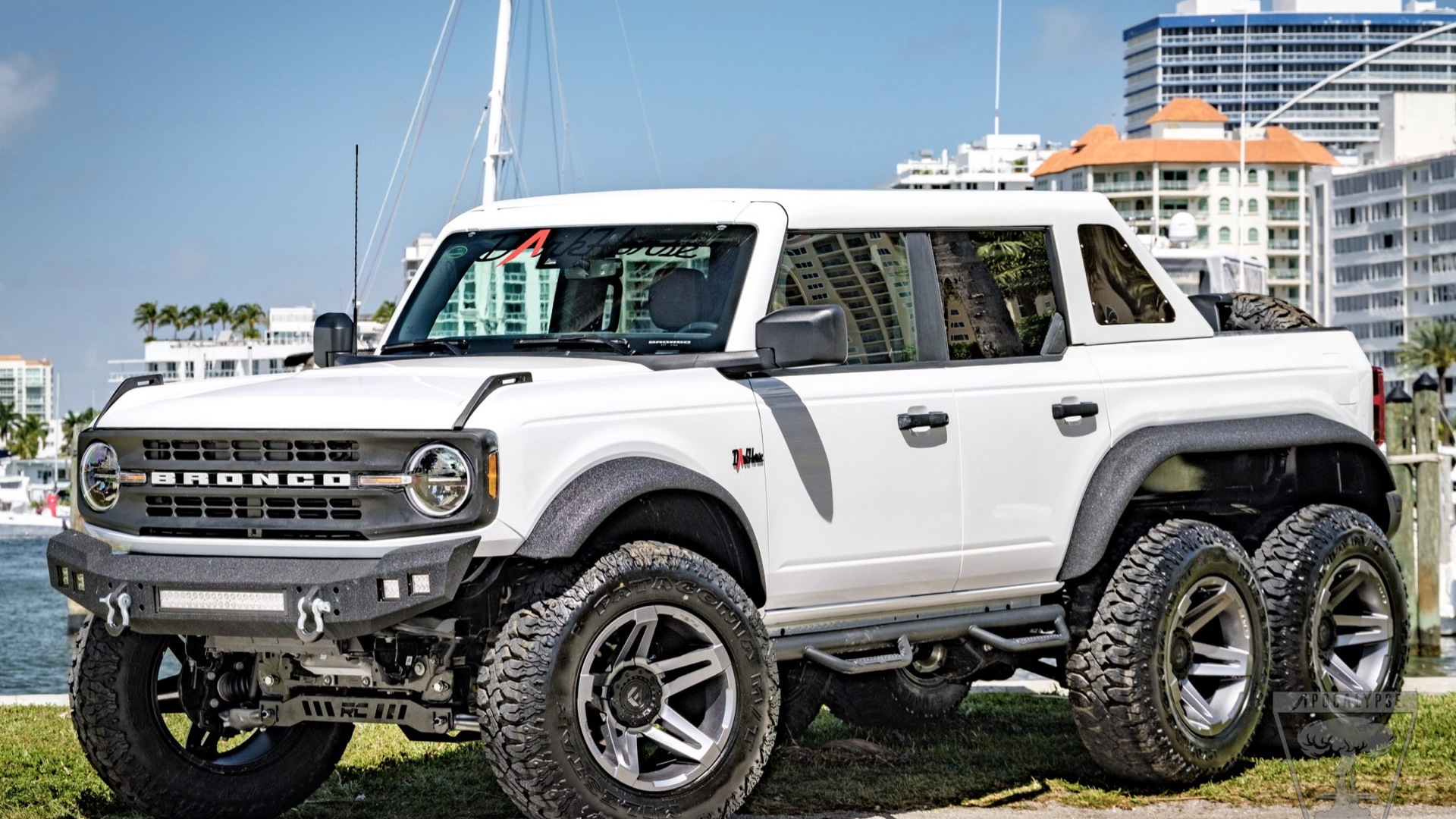 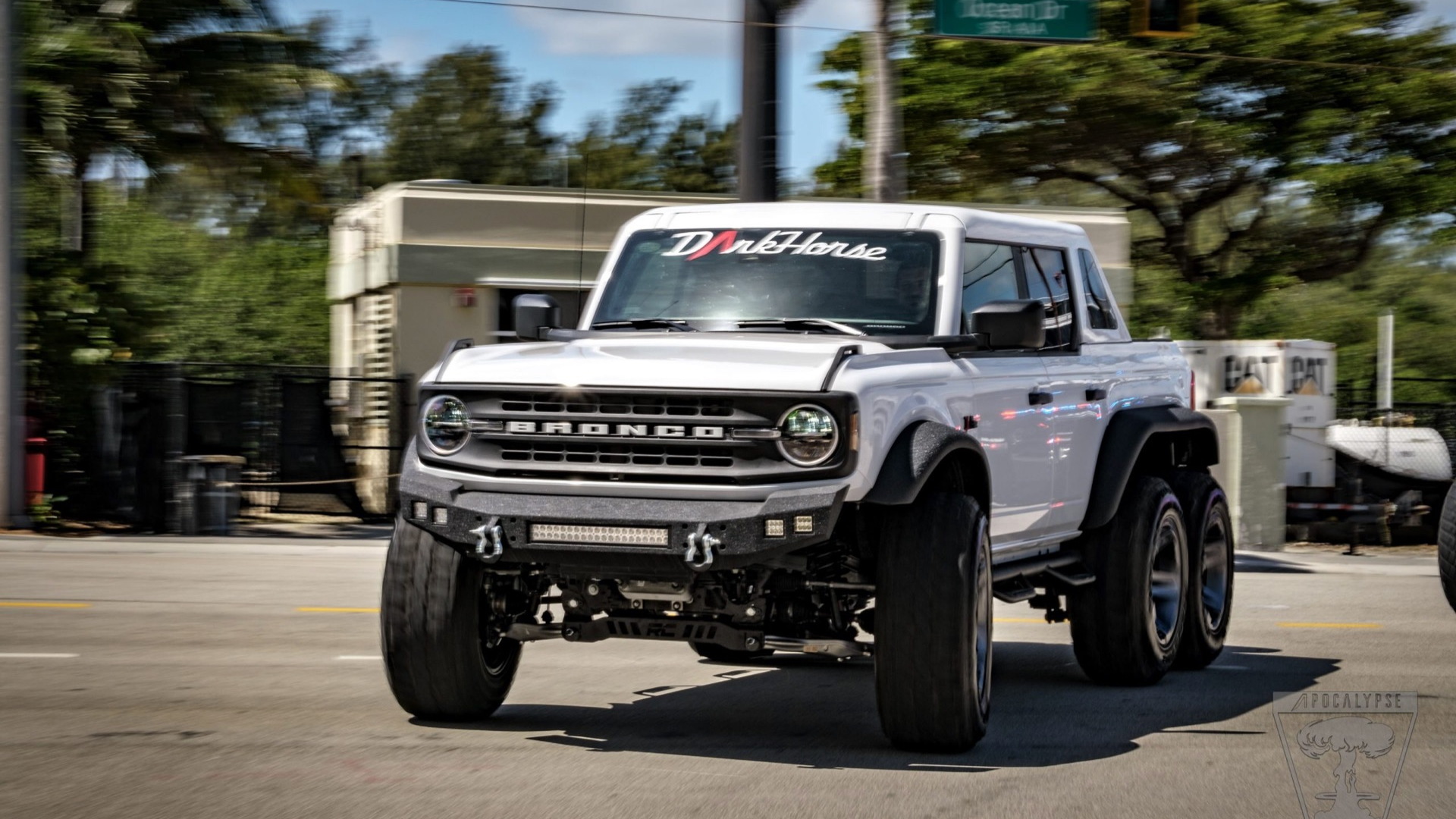 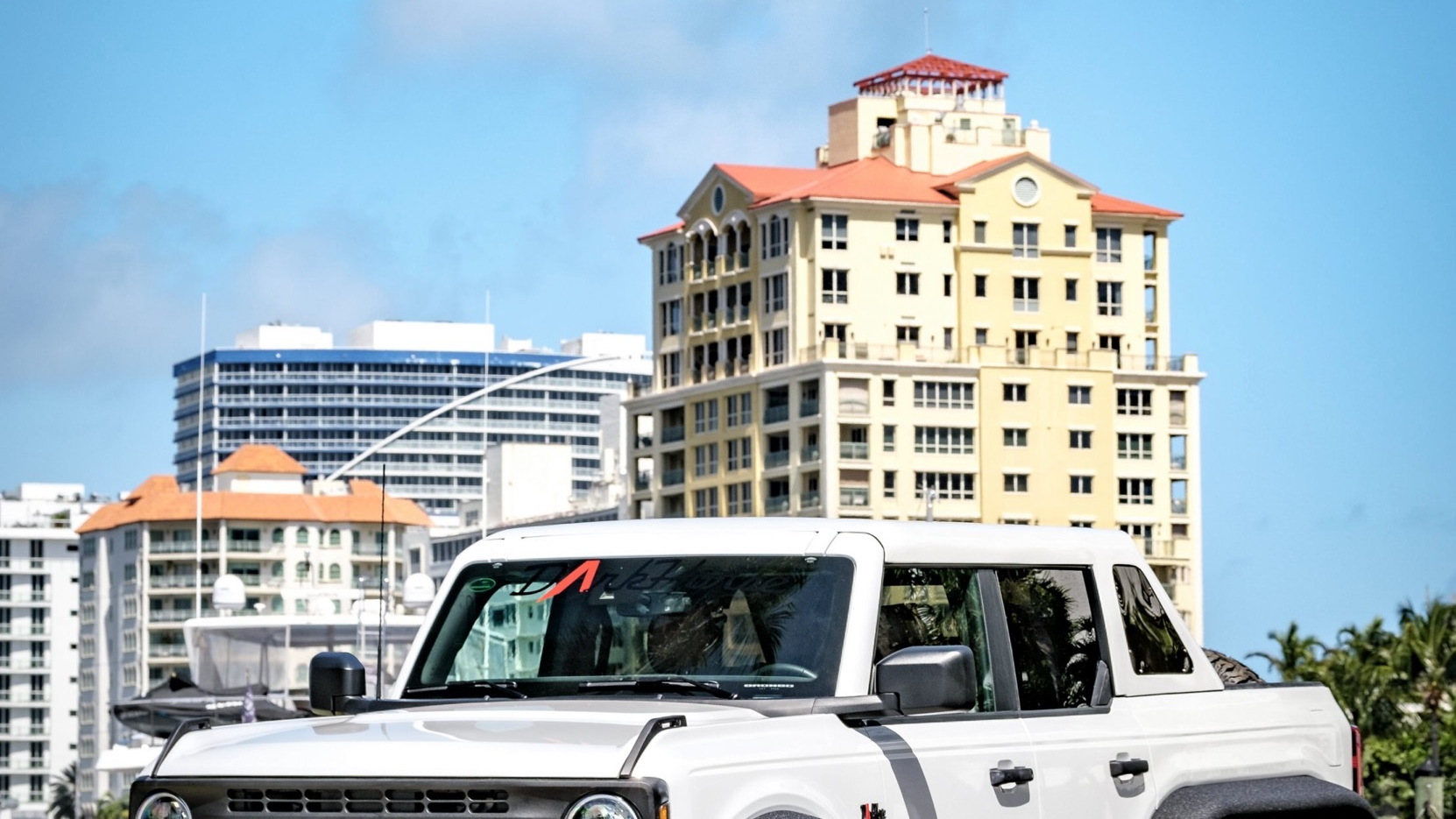 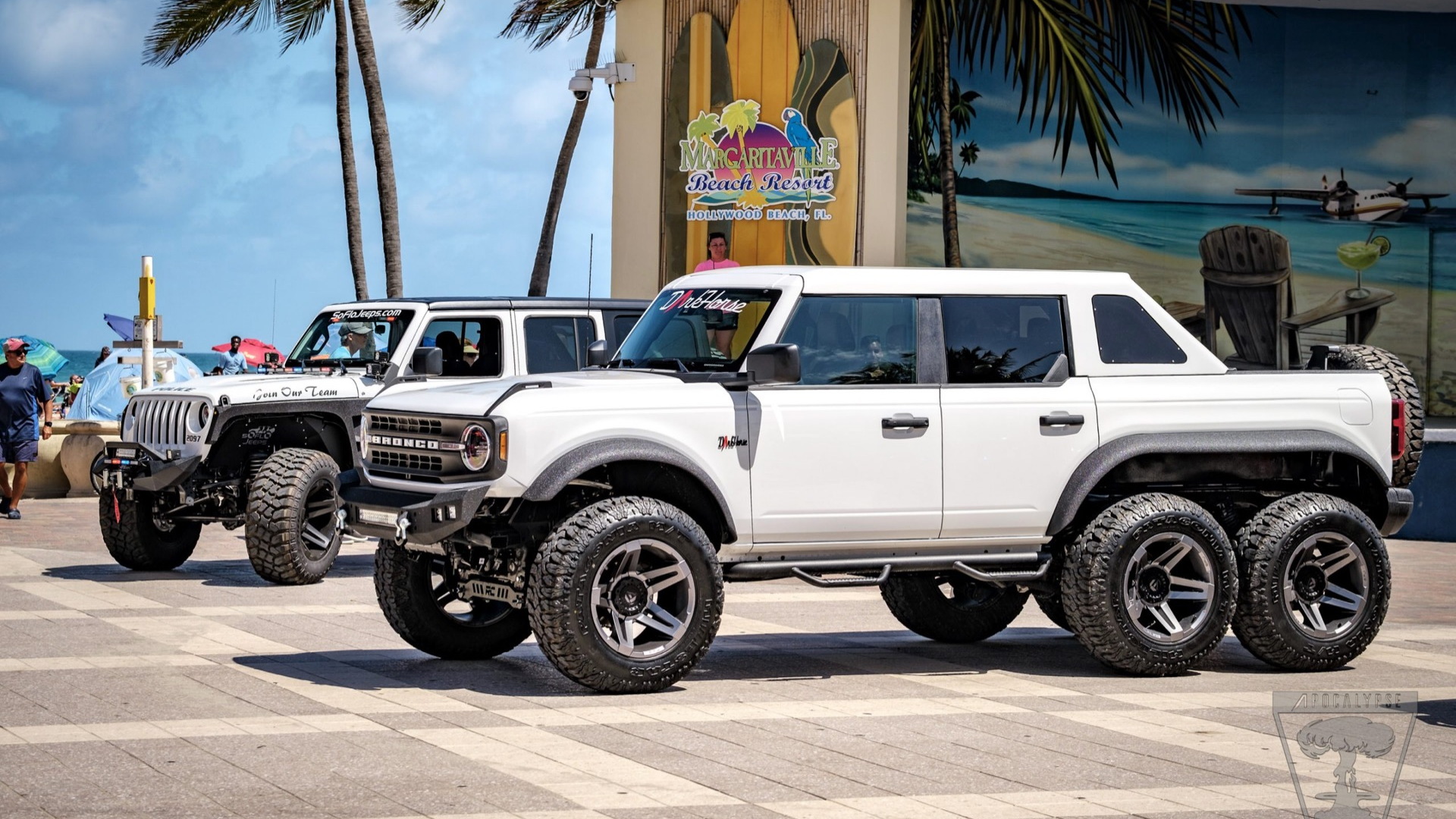 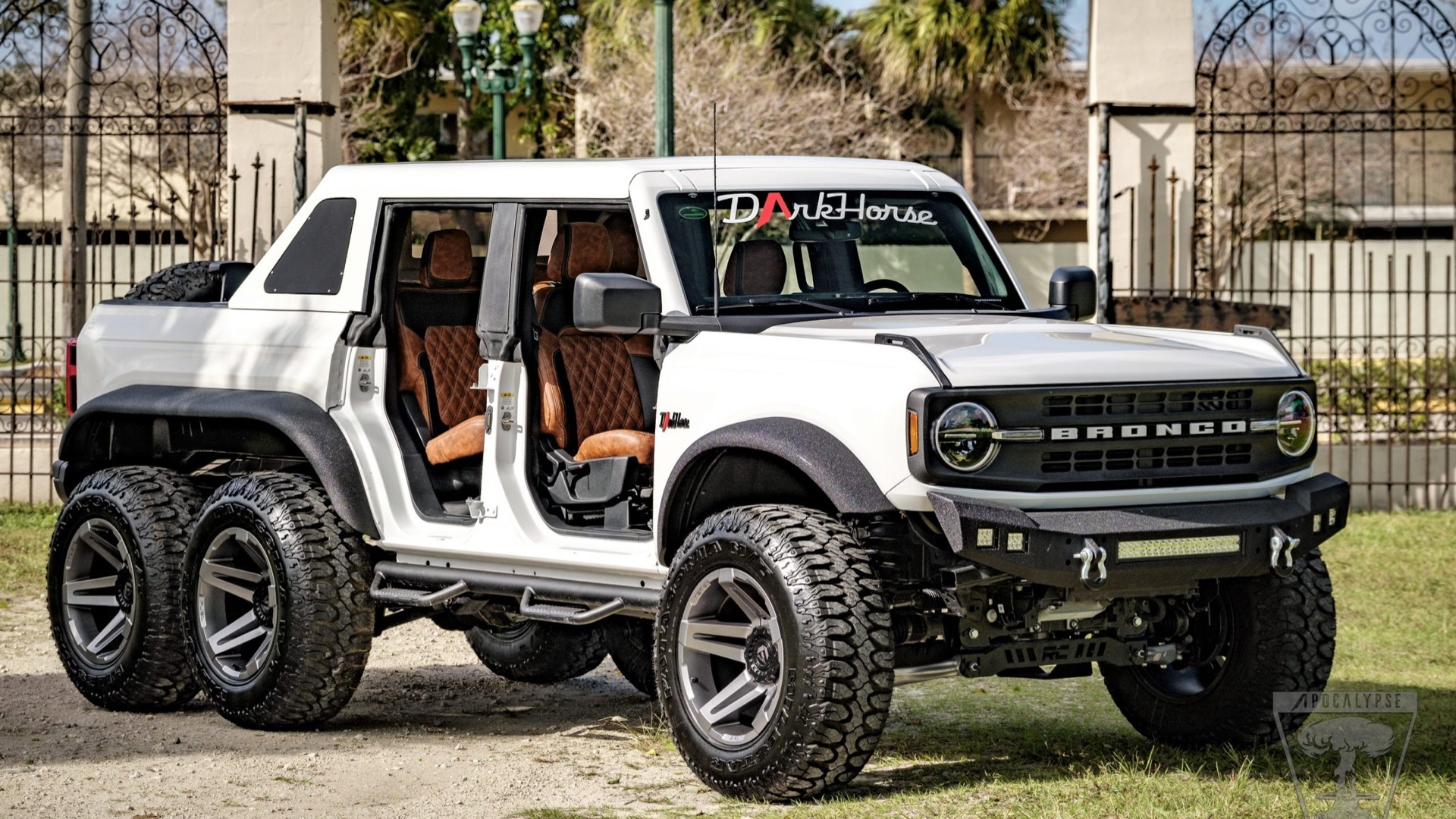 Florida-based Apocalypse Manufacturing has built what it claims to be the first Ford Bronco 6x6. Called the Dark Horse, the modified SUV will be auctioned off by Barrett-Jackson on April 9 in Palm Beach, Florida.

Apocalypse Manufacturing specializes in 6x6 conversions. Previous builds include a Jeep Gladiator 6x6 and a Ram 1500 TRX 6x6 known as the Warlord. Given the popularity of these conversions, it was likely only a matter of time before Apocalypse turned its attention to the Bronco.

The Dark Horse started out as a four-door Bronco before receiving its extra axle and a five-foot pickup bed. These additions stretched the Bronco's overall length from 189 inches to 225 inches, according to Apocalypse. The company also replaced the stock convertible roof with a removable fiberglass hardtop.

The stock 2.7-liter turbocharged V-6 also got new software, larger injectors, and a modified exhaust system. This increased output from the stock 330 hp to about 400 hp, Apocalypse claims. That power goes to all six wheels thanks to an Apocalypse-patented middle tandem axle. Those wheels are wrapped in 37-inch tires, and the Bronco also received a 4-inch suspension lift.

Apocalypse reupholstered the interior in tan and black leather that the company calls a King Ranch pattern. The leather is marine-grade and water-resistant, the company noted, which should come in handy if you spend a lot of time driving with the roof and doors off.

The company has additional Bronco 6x6 builds planned, including conversions of customer Broncos. Some of those builds could be even wilder, sporting a 700-hp supercharged Coyote V-8 or a Kevlar-coated paint job, Apocalype owner Joseph Ghattas said in a statement.