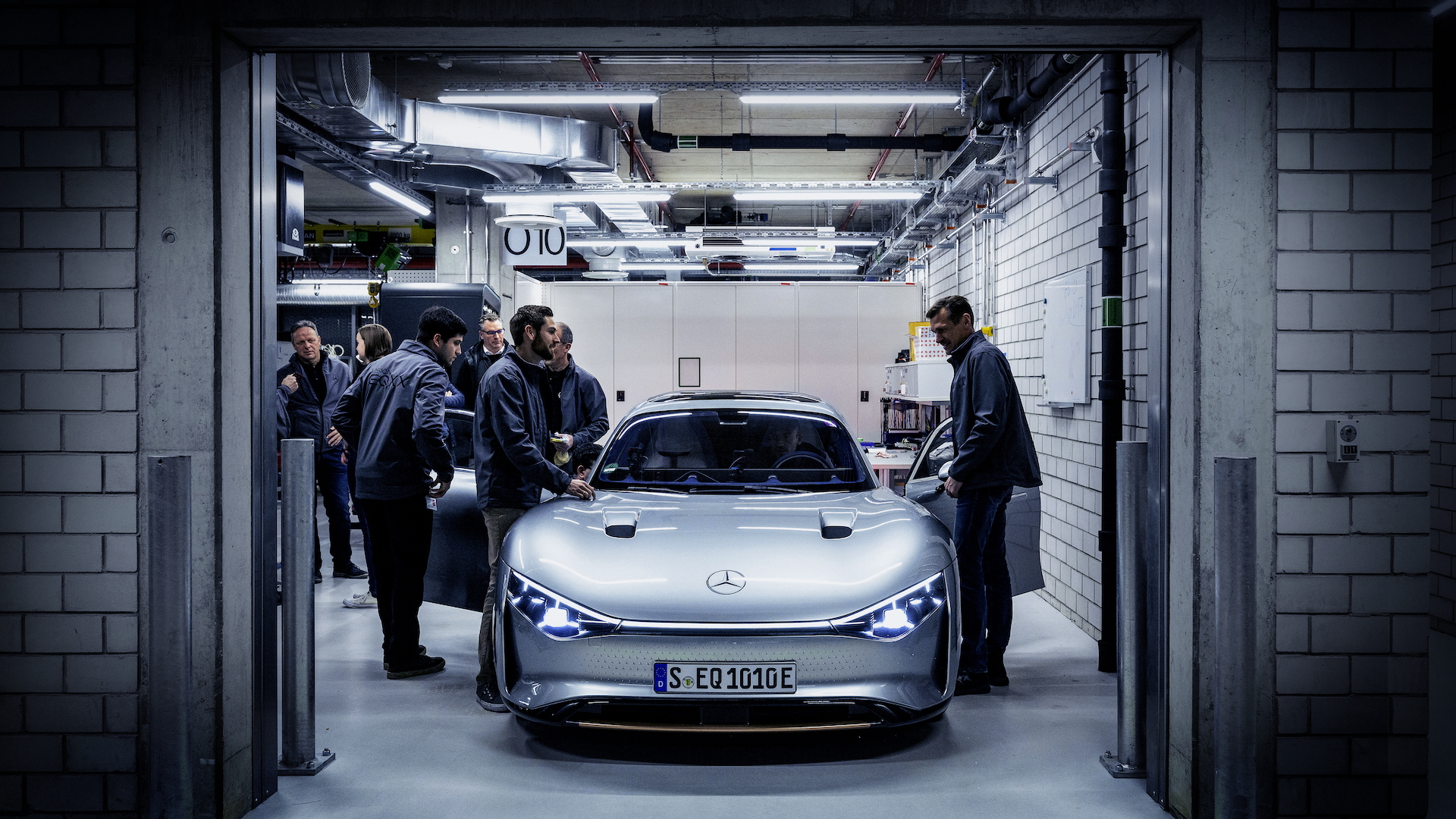 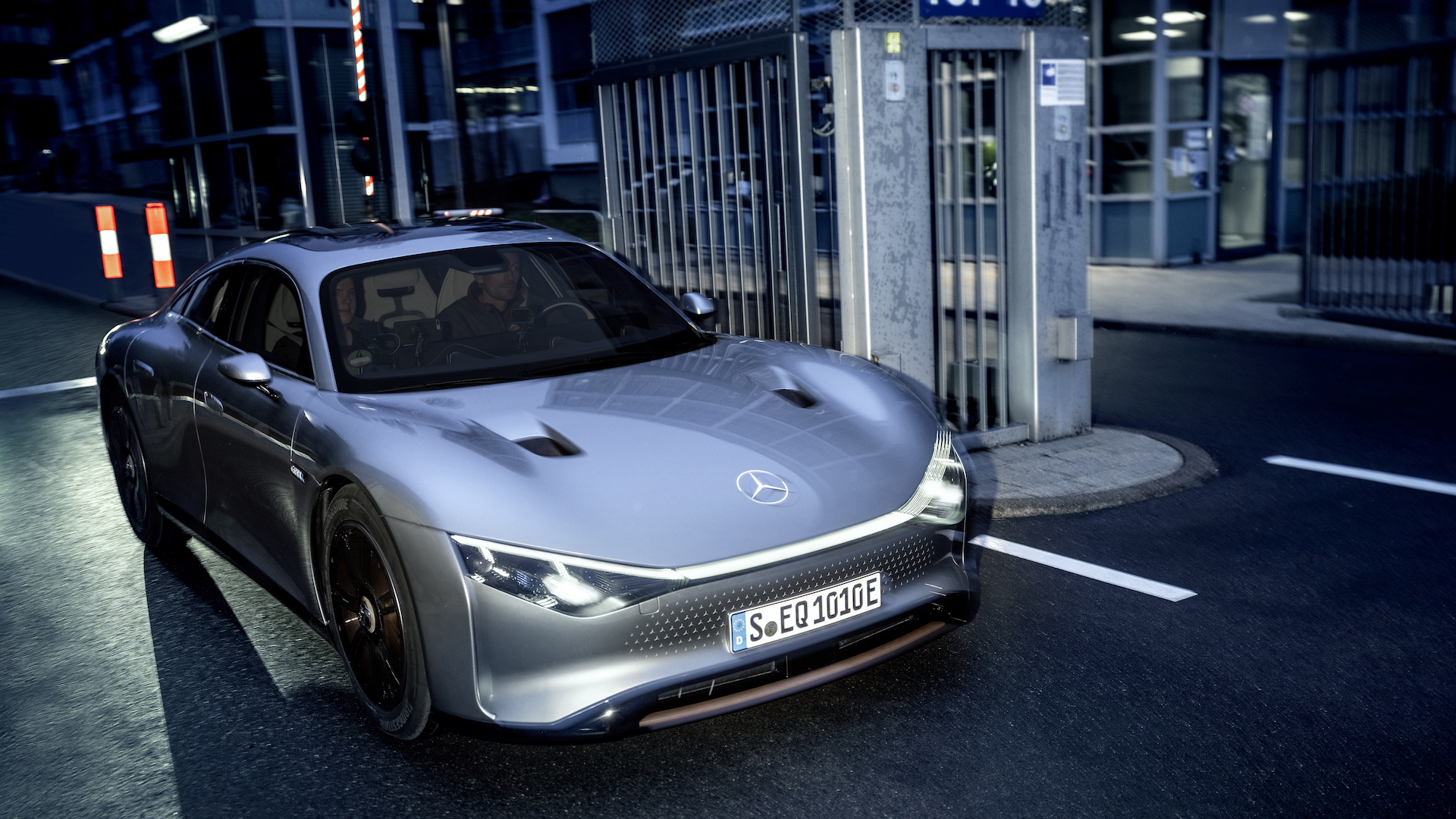 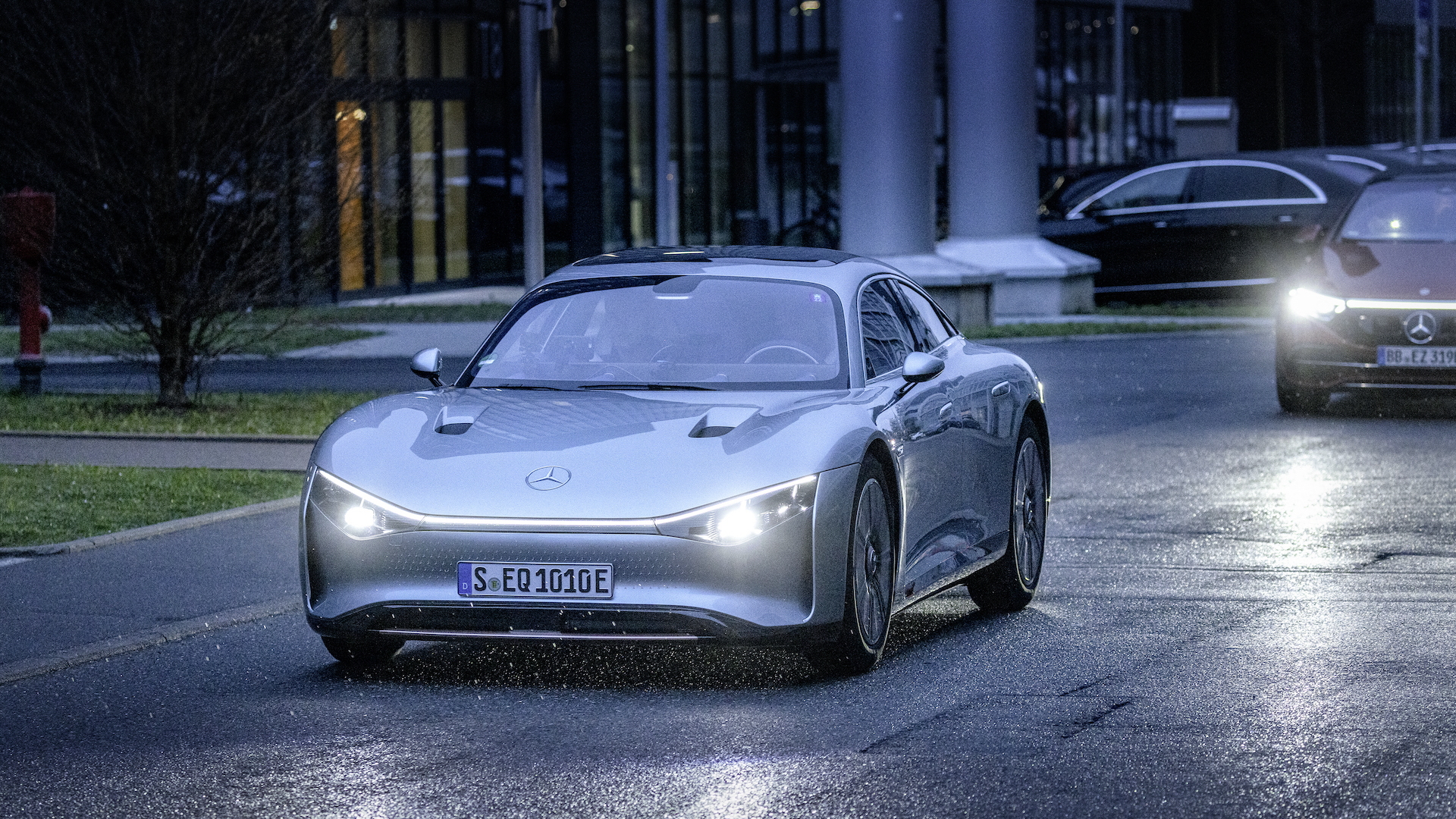 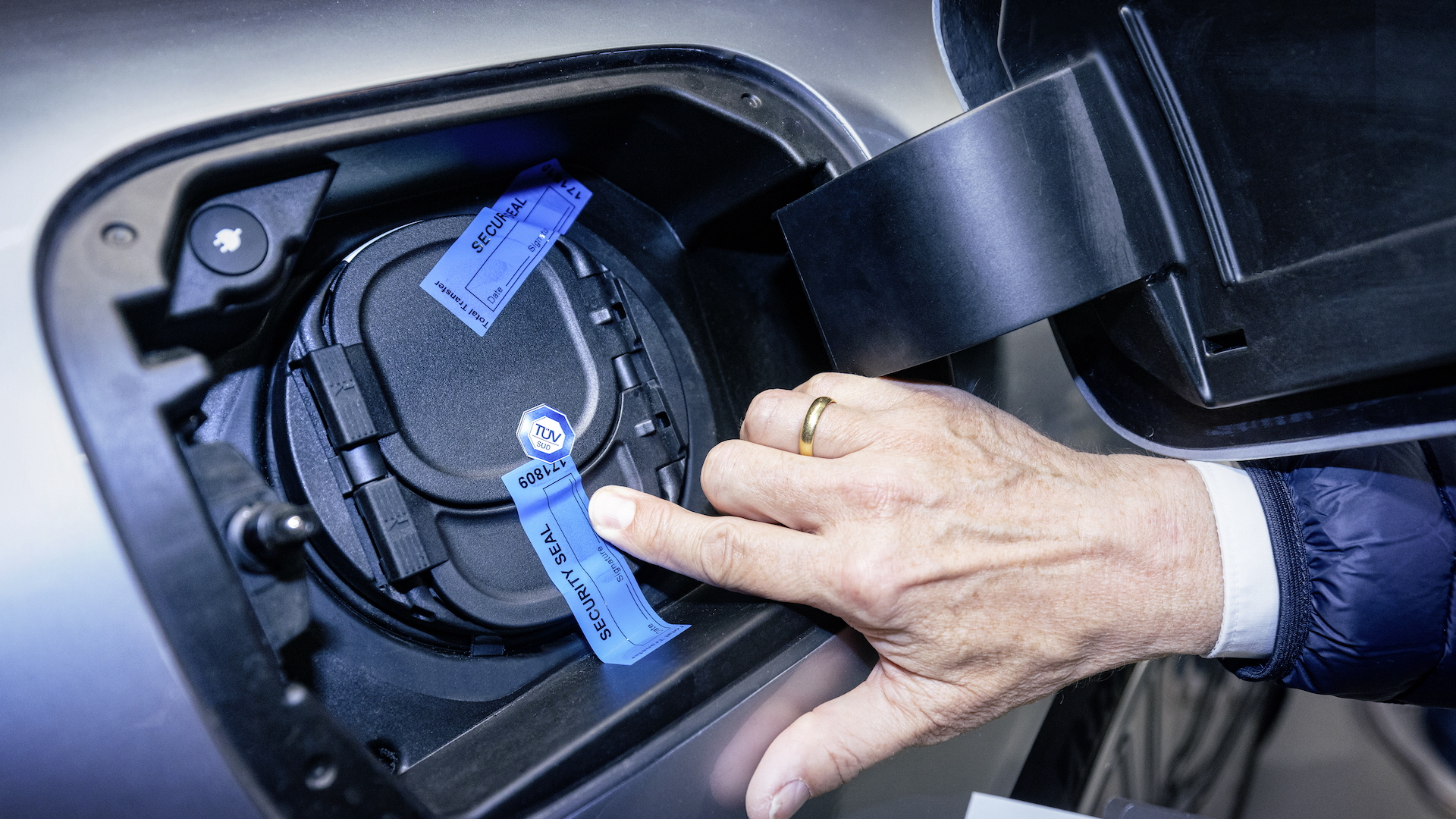 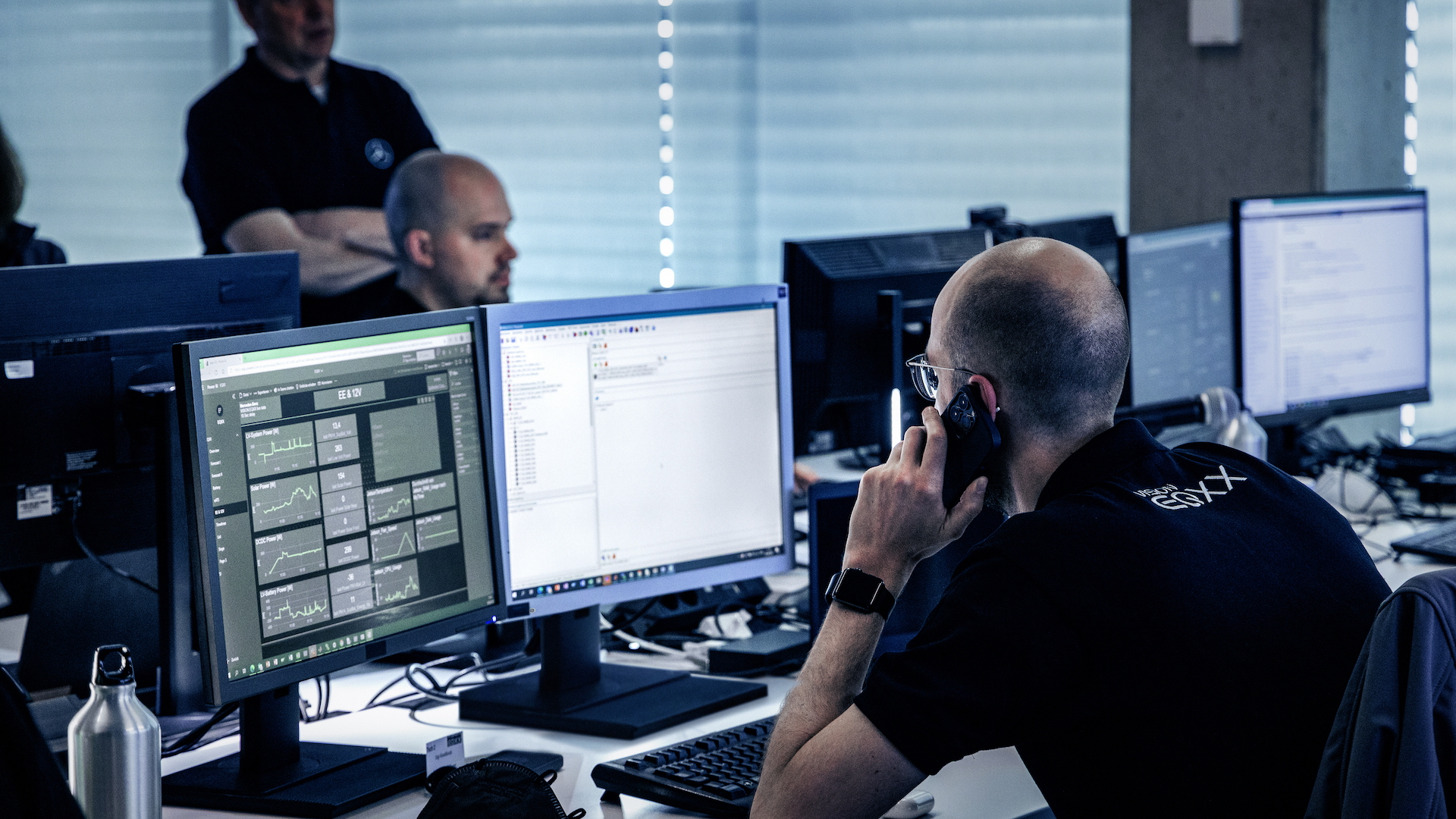 Mercedes-Benz says its experimental Vision EQXX electric car has traveled from the Stuttgart suburbs to the French Riviera on a single charge, using just 8.7 kilowatt-hours per 62 miles to drive a total of 1,008 kilometers, or 626 miles, with an average speed of about 55 mph monitored by a think tank watching its every move by remote from the home office.

The concept-car project marks a new wave of electric-car development at the German automaker, which plans to go the full-electric route by 2030.

The Vision EQXX made its debut at January’s CES in Las Vegas, where Mercedes said it would demonstrate its leadership and capabilities when it comes to electric-car technology.

Mercedes started development of the EQXX with the goal of rethinking every element of an electrically powered vehicle in order to maximize efficiency. The result, the automaker claims, is a car that can cover long-distance drives like the one to Cassis, near its southern France design studio, in real-world driving on a single charge.

The Vision EQXX’s lithium-ion NMC battery still had roughly 15% of its total battery capacity left after the 626-mile drive, or as Mercedes says, another 87 miles left before battery-protection margins halted its progress. That 626-mile drive checks in at 106 miles more than the current range king, the 520-mile Lucid Air Dream Edition. It makes it, engineers attest, the most efficient vehicle Mercedes has ever built.

The EQXX is a sedan that weighs approximately 3,869 lb, has a wheelbase of 110 inches, generates a peak 201 hp, and runs on a 900-volt electrical system. The 20-inch wheels sport an aerodynamic design  and are wrapped in Bridgestone’s Turanza Eco tires. The concept car has functioning front doors, but a fixed rear end from the B-pillars back, marking a transition between what looks like a production-ready front end and a more experimental tail.

Mercedes tapped all of its various divisions to help maximize the car's efficiency, including the Formula One team. This extends to the software used by the car. Other key efficiency areas include the design of the electric motors, the use of lightweight materials, and the optimization of aerodynamics.

In the case of aero, we're talking a coefficient of drag of about 0.17, thus beating the 0.20 Cd rating of the Mercedes EQS—which has the lowest rating for a production vehicle. And a single drive unit combining an electric motor, transmission, and power electronics featuring a new generation of silicon carbides, helps transfer 95% of energy stored in the battery to the wheels. The EQXX has a power-extendable rear diffuser that accounts for a substantial reduction in drag, Mercedes says, and careful tuning of the side of the car—it has nearly flat wheel covers—cured it of a “turbulent sausage” of wind that usually afflicts less smooth vehicles.

Another key area of efficiency is heat management. A system of aero shutters, coolant valves and water pumps helps keep the drive unit and battery from overheating. Conversely, when conditions are cold, which normally reduces range, the system can help preserve heat. A heat pump is also present to help draw heat from the drive system to keep the cabin warm. It also features an external heat exchanger that draws heat from the ambient air to help warm up the cabin faster.

Weight reduction was achieved via the increased use of lightweight materials and constant revision. Engineers managed to cut about 90 lb from the curb weight in the last few weeks of development—as if it were taking on a shredding cycle before its competition. A new technique was employed for some structural elements, where software tools were used to design parts with high-strength, low-material characteristics, resulting in somewhat organic-looking forms. We've seen something similar from companies like hypercar startup Czinger; in the Vision EQXX the wiper arms, for example, are 3D printed and look like something Gaudi used to block out the Sagrada Familia.

Finally, the EQXX features a solar array connected to its own small battery. Energy generated by the solar array is used to power ancillaries like the lights, infotainment system, and other cabin features. This takes some load off the main battery.

In terms of overall efficiency, Mercedes has demonstrated the car uses less than 10 kwh of electricity per 62 miles. That's the amount of energy needed to run a home's air conditioner or tumble dryer for about three hours.

The main battery is close to 100 kwh in capacity and features a density of about 400 watt-hours per liter. What this means is that the battery has almost the same capacity as the battery in the EQS but is half the size and 30% lighter. This was primarily achieved via better packaging of the cells, plus the use of anodes with high silicon content—which means they can hold more energy. Mercedes engineers suggest that the automaker could test other battery chemistries inside the same rolling body—a less efficient but more durable and cost-effective LFP battery, for example.

The Vision EQXX’s gorgeous exterior proves that—if it can be translated into production—electric cars can give us beautiful cars again, with low and sleek shapes imbued with a sort of 1930s boattail drama.

Compared to the technology elsewhere in the vehicle, the interior appears slightly more conventional. It features current Mercedes design themes, but with a futuristic flair. Highlights include the wide screen spanning the dash, which foretells the successor to the multi-display Hyperscreen environment, as well as sustainable materials used throughout. One of these is a leather-like material made from mycelium, which is the underground structure of mushrooms and other fungi. Another, a violet-blue bamboo shag rug, gives off major Cookie Monster energy.

Test drivers have drifted the EQXX concept on the track, and in a short ride given to Motor Authority outside Cassis, the car seemed completely conventional from the passenger seat. Without the adaptive damping and exotic suspension of the bigger EQE and EQS sedans, its ribbon-candy-like fiberglass rear springs seemed less a throwback than the exotically tapered shape.

It’s rarely useful to drive a concept car, since much of it is an engineering sandbox stuffed with features and experiments that never will reach buyers. While Mercedes isn't expected to launch a production version of the Vision EQXX, lessons learned in developing it will benefit future EVs from the automaker. Mercedes said it will spend more than 40 billion euros (approximately $45.3 billion) on EV development between 2022 and 2030. In the case of the EQXX, those big figures have clearly been spent on some of its flashier bits and pieces: the fluid gaming style of its cutting-edge infotainment system, the densely packed battery and its super-saver motors, and we hope, some of the intriguing shapes and textures faired into its cabin.

—with additional reporting from Martin Padgett