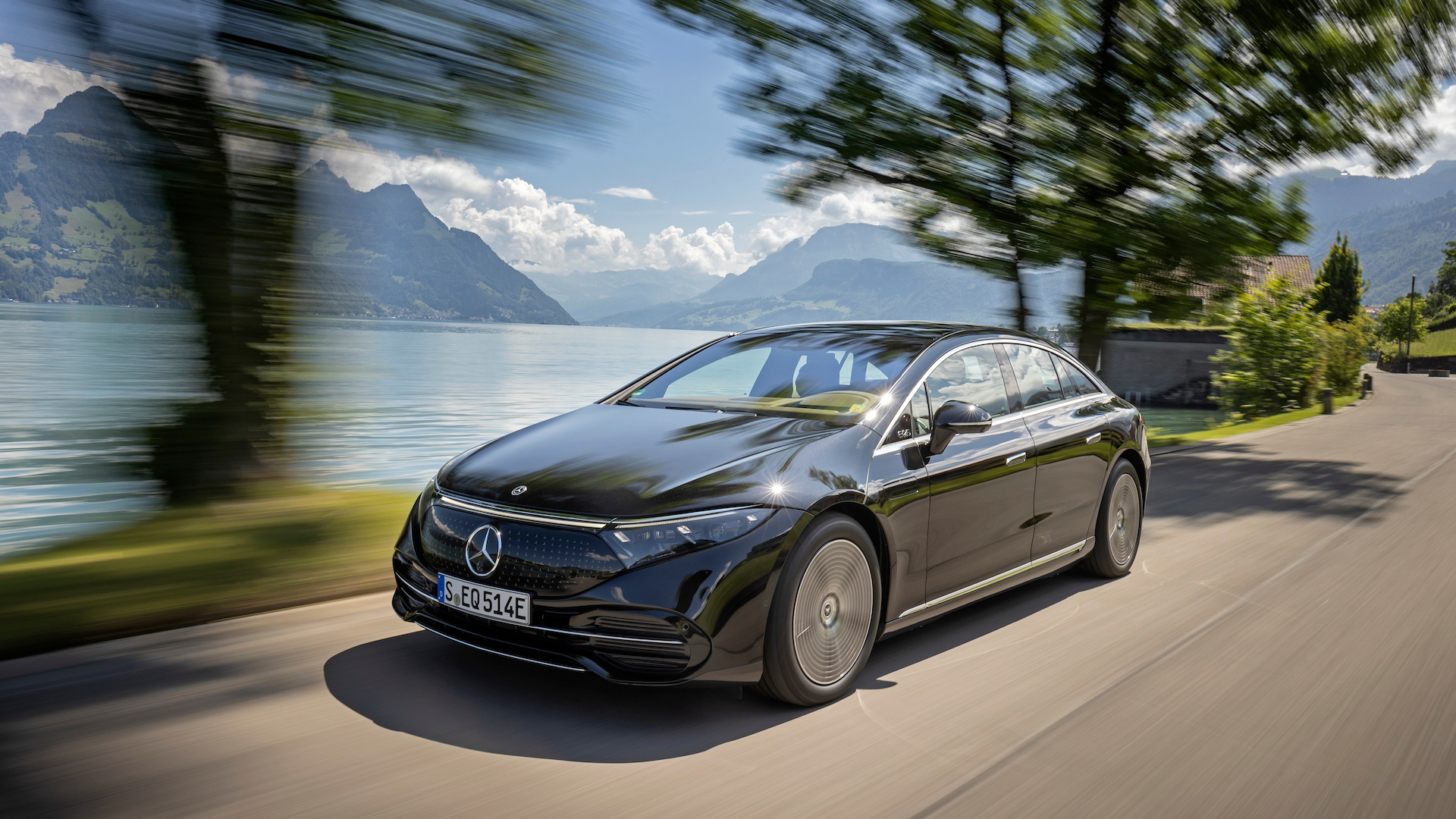 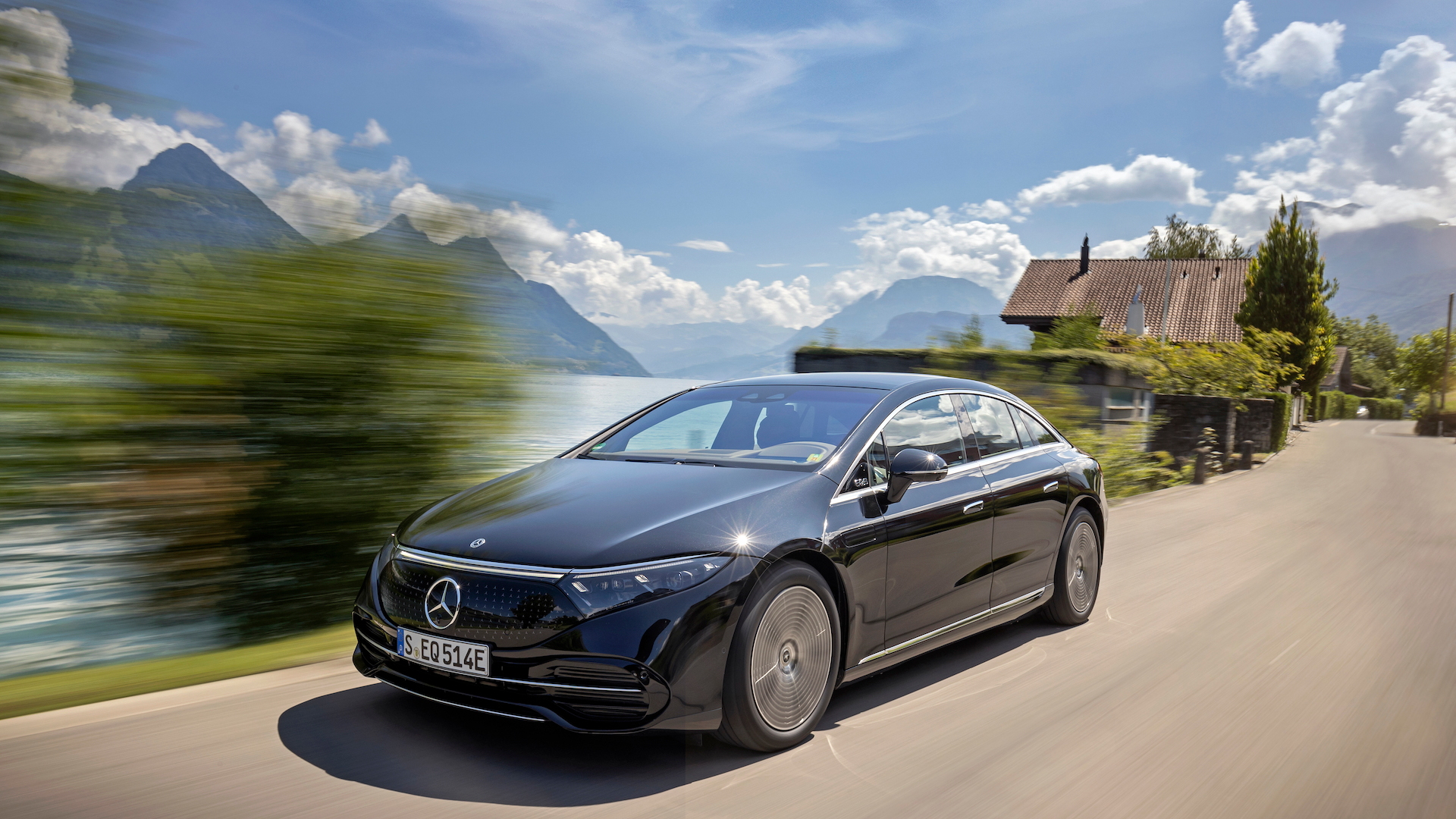 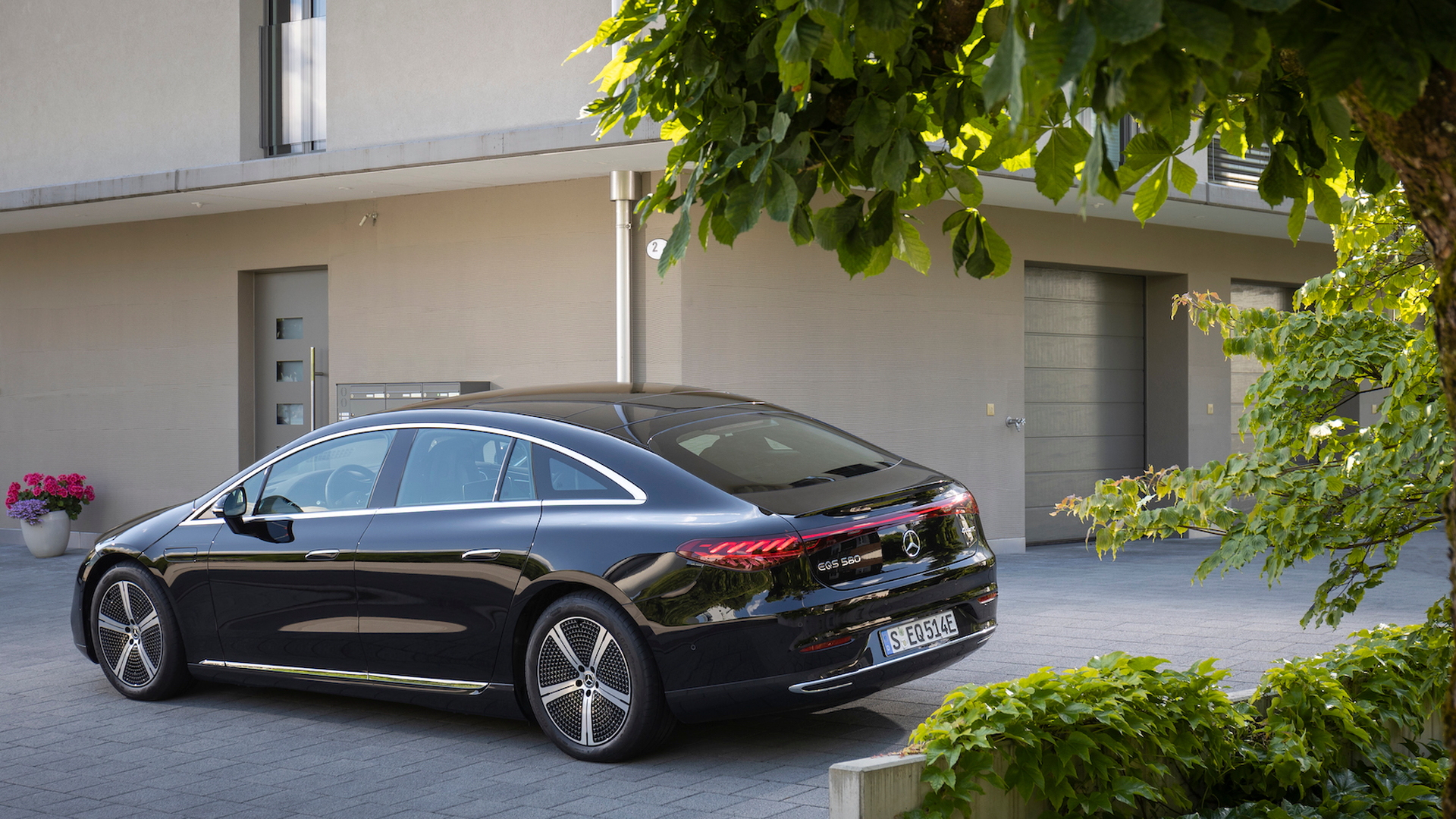 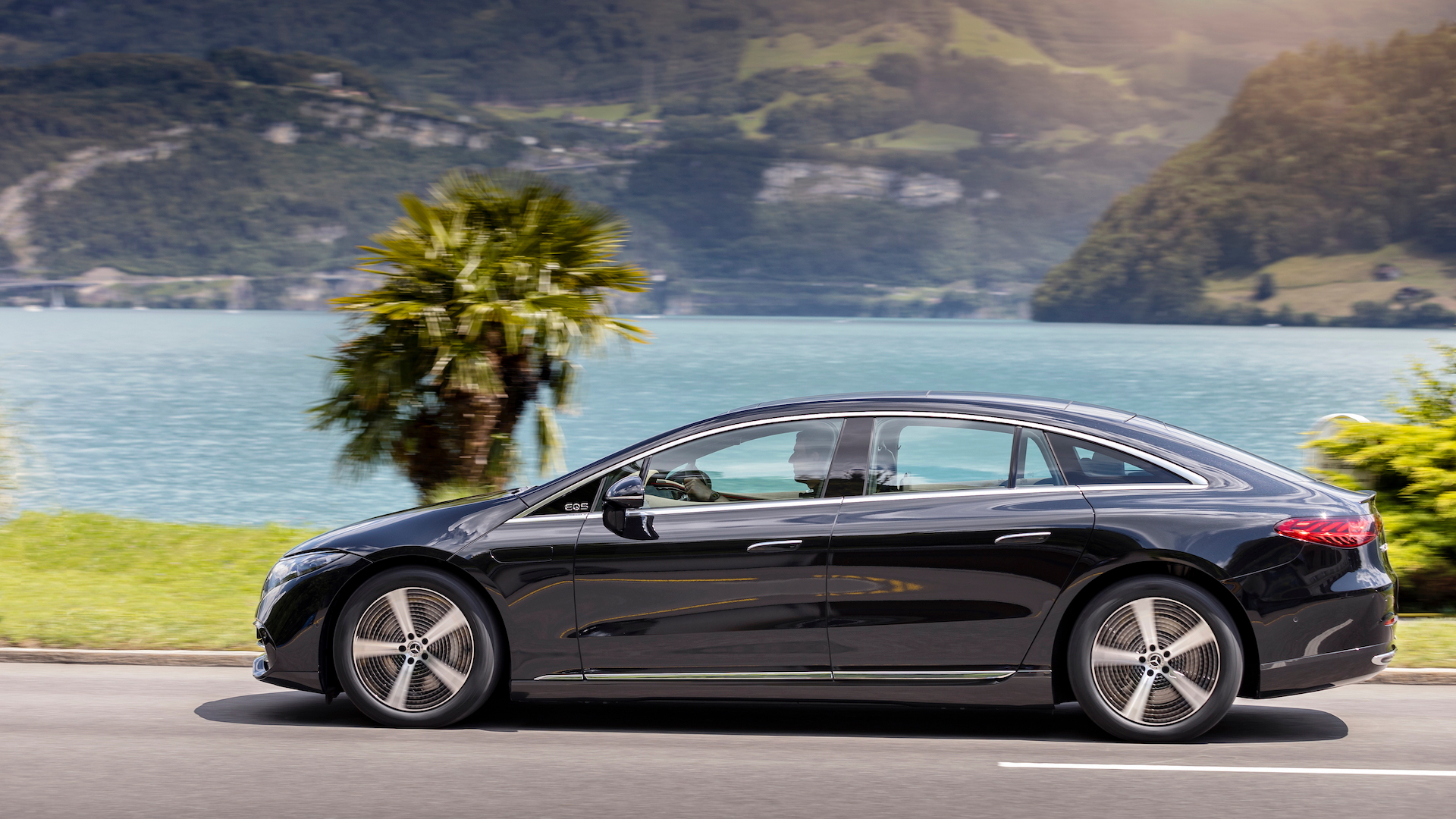 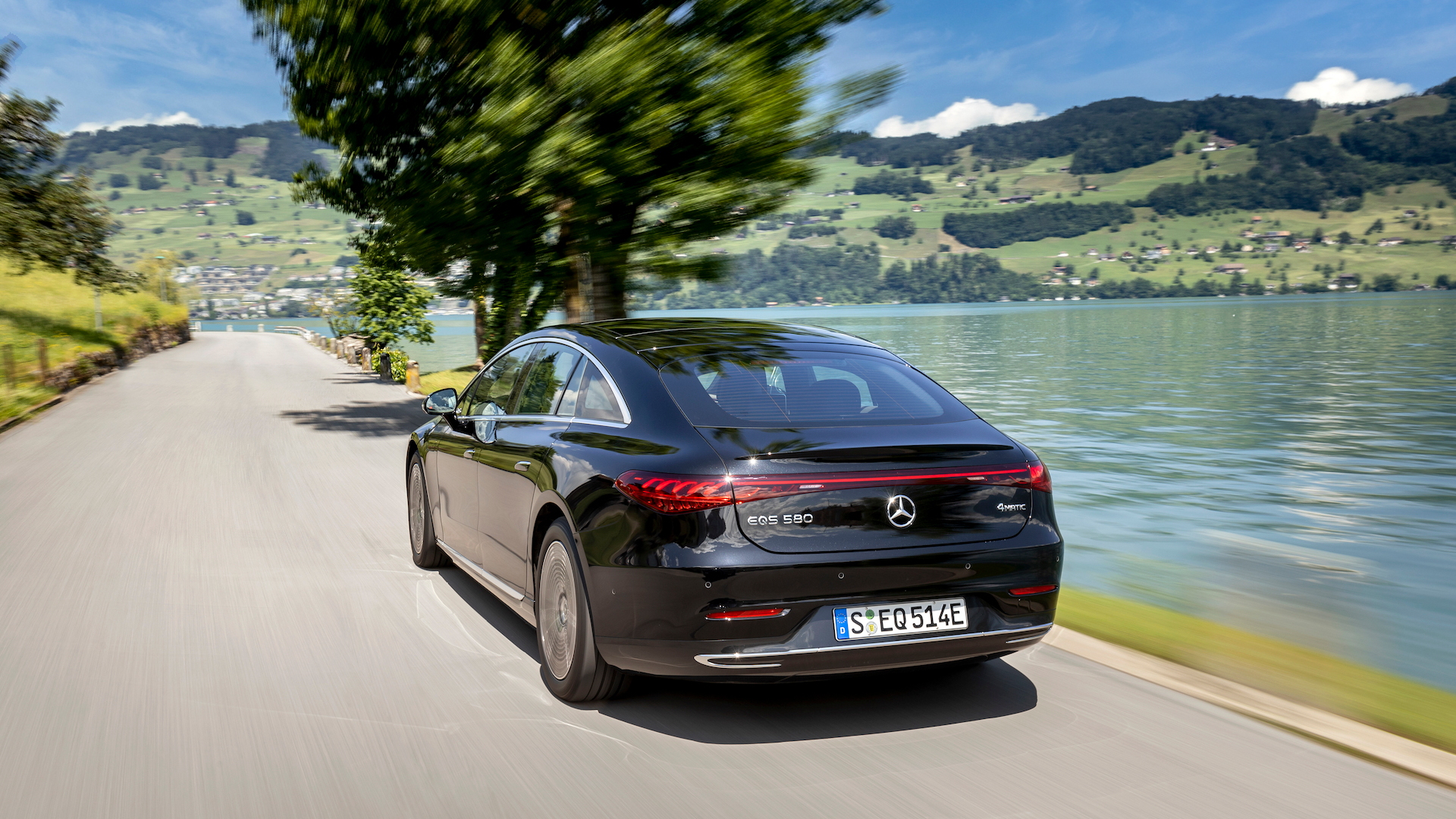 It’s not a Tesla Model S killer, if that’s the headline you want. It can’t blister the road like a Plaid—yet, if it ever will—and while its range is similar it’s still not precisely in focus for U.S. drivers. It doesn’t recharge at boutique pit stops, either.

Where it curbstomps the Model S is in build quality and serenity. It’s softly sprung, sensually padded and upholstered, and graced with the in-car equivalent of an IMAX screen. It’s built to a standard several magnitudes higher than any Tesla we’ve ever sat in, driven, or spotted at a parking lot.

The 2022 EQS isn’t alone in this executive-class luxury dogfight. It still has the Porsche Taycan and Lucid Air to deal with. But for a change, it’s Tesla that needs to check its six. After two days of driving in the Swiss Alps, the EQS left me wanting only for more seat time and more 85% cocoa Lindt bars. It’s the S-Class of tomorrow, today.

It’s striking, but not surprising, how closely the EQS mirrors the S-Class driving experience. It’s heftier but roughly equivalent in power, and sports an air suspension carried over from the gas-powered S.

The powertrain mimics an S-Class in thrust, though it’s entirely from another engineering planet. A skateboard jammed with CATL batteries generates 107.8 kwh of energy, and sends it to a rear 245-kw motor in the EQS 450+ or splits it between that and a smaller 140-kw front motor in the EQS 580. The former’s rated at 329 hp and 419 lb-ft of torque.  It weighs 5,597 lb minus passengers (a grand more than an S450, give or take), and takes 5.9 seconds to reach 60 mph. That’s nowhere near as quick as a Model S Long Range, much less a Plaid, but is in the neighborhood of a base S-Class (at about 5.0 seconds), down to the 130-mph top speed.

Mercedes leaves lots of upward potential in its battery pack, and confirms a performance version with up to 630 hp is coming. Place your bets on the three letters it will wear, and they should probably include G, A, and M.

The problem for the EQS is that the upward potential doesn't correlate to range. The EQS 450+ gets an EPA rated 350 miles of range, while the heavier EQS 580 comes in just behind that at 340 miles. These figures are disappointing when we thought the EQS' 485 miles on the Euro WLTP cycle would convert to 400 miles or more. Against the Model S and Lucid Air, these ratings fall short with the Model S offering up to 405 miles of range and the Lucid an Air-y 520 miles.

The EQS' Speed also doesn’t compare with the Model S, and while Supercharging’s a killer app for Tesla drivers, Mercedes makes do with a pervasive virtual network of Electrify America and ChargePoint stations (though it does offer plug and charge capability on Electrify America's network). The EQS’s 9.6-kw onboard charger takes almost a dozen hours to repack the pack on Level 2 stations, or 31 minutes to reach an 80% charge on 110-kw fast-charging (it can accept up to 200-kw charging, where offered).

With distinctly different weight distribution, the EQS still handles like an S-Class. Drivers can adapt its power mapping through four regeneration modes (auto, light, sail, max). They can also tune its behavior across four drive modes (Individual, Sport, Comfort, Eco), which in turn adjust its steering and damping to match. I dove through dozens of hairpins and cruised motorways at, erm, posted speeds, and witnessed the EQS calm the road with the same borderline haughty control of an S-Class sedan. With the adaptive dampers and three-chamber air suspension lifted from the gas car, the EQS rides with the same resolute comfort, cushy through nearly all its body motions, clabbering softly against the pavement on 255/45R20 tires in the 450+ and 265/40R21s on the EQS 580. It grips with tenacity and copes easily with single-laners and city streets—but I didn’t dare go as fast as the 580’s twin electric motors would permit. The nearly three-ton car understeers as a default behavior, despite the dual-motor ability to flex power. It’s an issue of weight, not willingness—proven out by the tight 35.8-foot turning circle granted by up to 10 degrees of rear-axle steering. It’ll pivot like a compact car, but it can’t outrun physics.

Regen modes had a notable effect on the EQS’ brakes in both cars I drove. In the EQS 450+, engaging light and maximum recuperation overcame the long travel of the brake pedal before it engaged the massive 15.4-inch front and 14.9-inch rear friction brakes. On the EQS 580, that travel felt halved—and Sport drive mode with maximum regeneration rendered the brake pedal travel down to near zero.

Many EVs have a similar driving feel, thanks to low centers of gravity and perfectly linear power output. They’re missing the whirring symphony of clacking and clicking mechanical parts and the variable sensuality of gearboxes, power bands, and most of all, sound.

Mercedes believes that makes the car’s techno glow all the more important; that’s how we get Hyperscreen, an immersive and sometimes hyperactive amalgam of twin 12.3-inch displays for the passenger and driver and a 17.7-inch central display. With a wingspan of more than 56 inches and help from AI to figure out exactly what the driver and front passenger want to do, Hyperscreen sets the EQS apart from the sterile Model S cabin and throws down a complexity gauntlet unlike anything I’ve sat in, this side of a 767.

It’s an orchestrated assault of LED lighting, pixel-driven commands, touchscreen swipes, and anticipatory gestures. The EQS will reveal retractable door handles in a moment of technological arousal, will open and close the door with the gentility of a good butler, and will suffuse the cabin in a mist of color specified by the driver. It ties it all together with a strip of LED lights that pulse around the perimeter of the cabin with a Tron-like glow.

Hyperscreen so dominates the interior—and sets it apart from the S-Class—that it takes more than a while to customize its myriad inputs and notifications and settings for navigation, climate, audio, and more. A home icon on the main screen reorients the driver (or acts as a panic button) when the multiple layers of augmented-reality mapping, audio inputs, directional displays, and “energizing” climate-control modes get to be too much.

Hyperscreen can be too much—until you tweak it to your usable levels of input. It’s a blessing that the head-up display offers a wealth of clearly legible information, with less of the sensation of being in control of a Holodeck.

Hyperscreen comes with every EQS 580, but it’s an option on the EQS 450+, which has a standard 12.8-inch portrait-style tablet like the new S-Class. It felt charmingly vintage, in comparison.

The EQS drops a hammer on the S-Class—and Model S—with a sybaritic cabin that rolls out its version of space with billionaire swagger. It’s 207.3 inches long, has a wheelbase of 126.4 inches, and has better accommodations than even the Maybachs Benz sells, if we’re just judging space.

It fares well in finishes too, with lovely open-pore woods and soft leather seats; in both of the cars I drove, the front headrests were padded with suede pillows that provided their own ad hoc massaging function against my stubbly scalp. The EQS’ power-seat controls don’t move like those on other Benzes, so they were harder to adjust finely. The back seat? It’s enormous, with copious head room and a nearly flat floor. (I wondered why the front seats didn’t power down lower, given that.) An option package adds in a center console with a tablet that links to the MBUX’s user interface. The hatchback’s plain common sense, even if the glass area’s rather small and empanada-shaped, which hampers outward vision while it begs the question, what’s for lunch?

It’s also remarkably quiet inside the EQS, with none of the tire yammering or groany sounds that cheaper, gas-powered cars usually emit. Some light motor noise and tire sizzle on wet pavement break through, but otherwise it’s damn near an isolation chamber. But Benz will pipe in synthetic noises to reassure you that you’re still driving a car. Silver Waves, Vivid Flux, and Roaring Pulse are the choices of the moment; hard pass here.

Mercedes arranged for a brief ride in its upcoming version of Level 3-capable Drive Pilot. The driver-assistance system can operate in hands-free mode at speeds of up to 37 mph. The demo, on Benz’ new test facility in Immerdingen, Germany, allowed the EQS to flow naturally with traffic, avoid a semi parked halfway in its lane, and avoid poorly executed merges by two vehicles at the same time ahead of the rolling test vehicle. The promise of safer hands-free driving has tantalized drivers since Tesla first hyped its Autopilot system—but we’re still a ways away from it, at least in the U.S. It’s difficult to imagine any automaker meeting a goal of Level 3 ability in U.S.-market cars by next year, given the regulatory environment. The EQS promises all this plus the ability to play Tetris while the car drives. It seems both a sort of existential letdown and wildly optimistic.

Options are said to include the executive rear seats with multi-contour adjustments and an auxiliary MBUX tablet, automatic-closing doors, AMG Line styling with sport seats, front multicontour seats with cooling and massaging, gesture control for the Hyperscreen system, 22-inch wheels, and thicker tinted glass for better noise and heat control.

As the first of a quartet of electric vehicles to come in rapid succession from Mercedes—an EQE and two electric SUVs are in the works—the EQS marks the moment where electrification strikes at the heart of the luxury-car segment. Model S drivers pay luxury prices, but get plasticky interiors and middling build quality for their trouble. The EQS doesn’t just mirror S-Class luxury, it builds on it with near-silent operation and even more swipes at the digital future. It’s softer, quieter, and most importantly, it’s more efficient than any S-Class, and it’s easy to see it dropping its EQ initials in a not so distant future.

Mercedes-Benz flew us to Switzerland and let us sleep in a hotel so that we could bring you this first drive review.