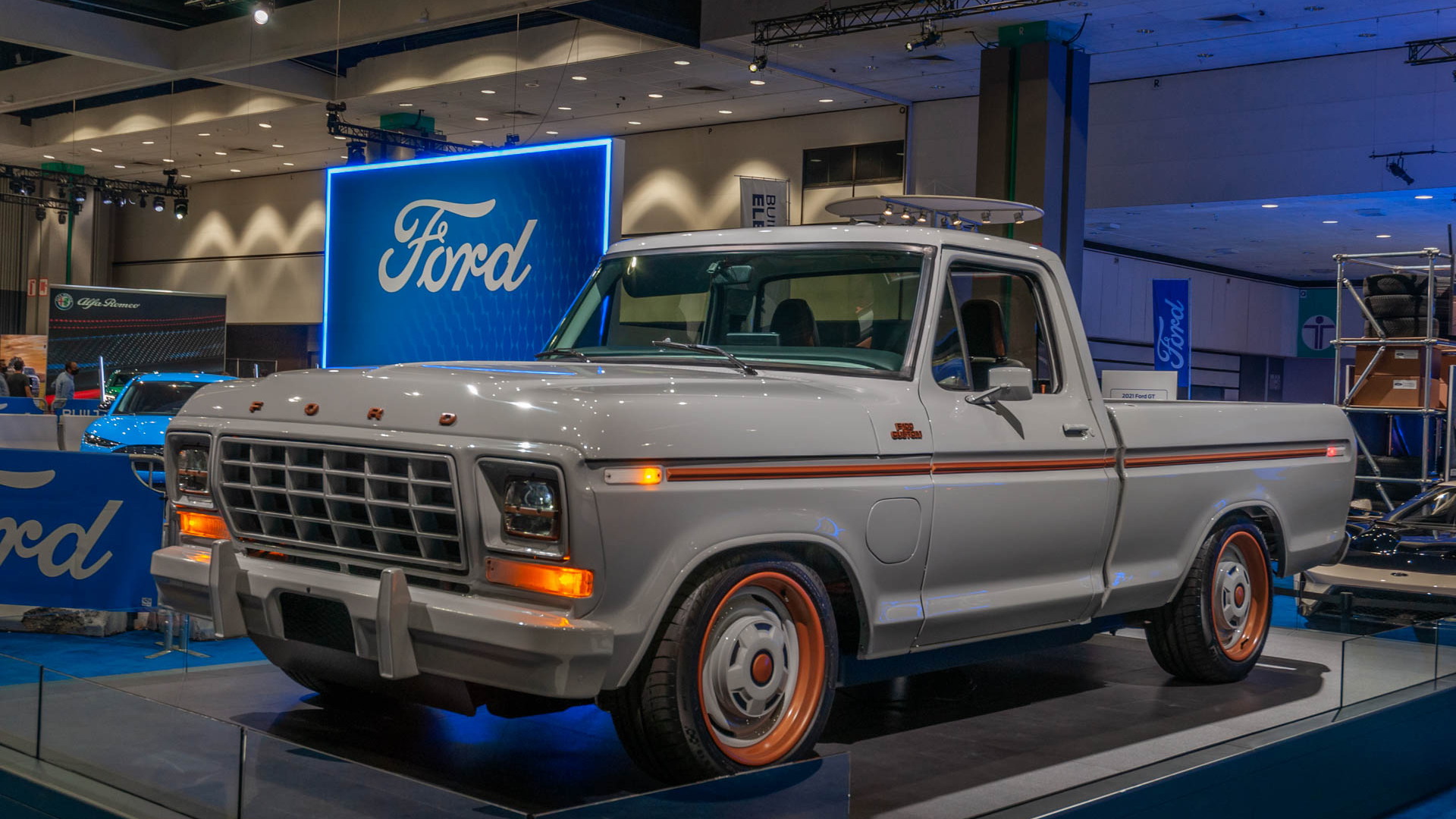 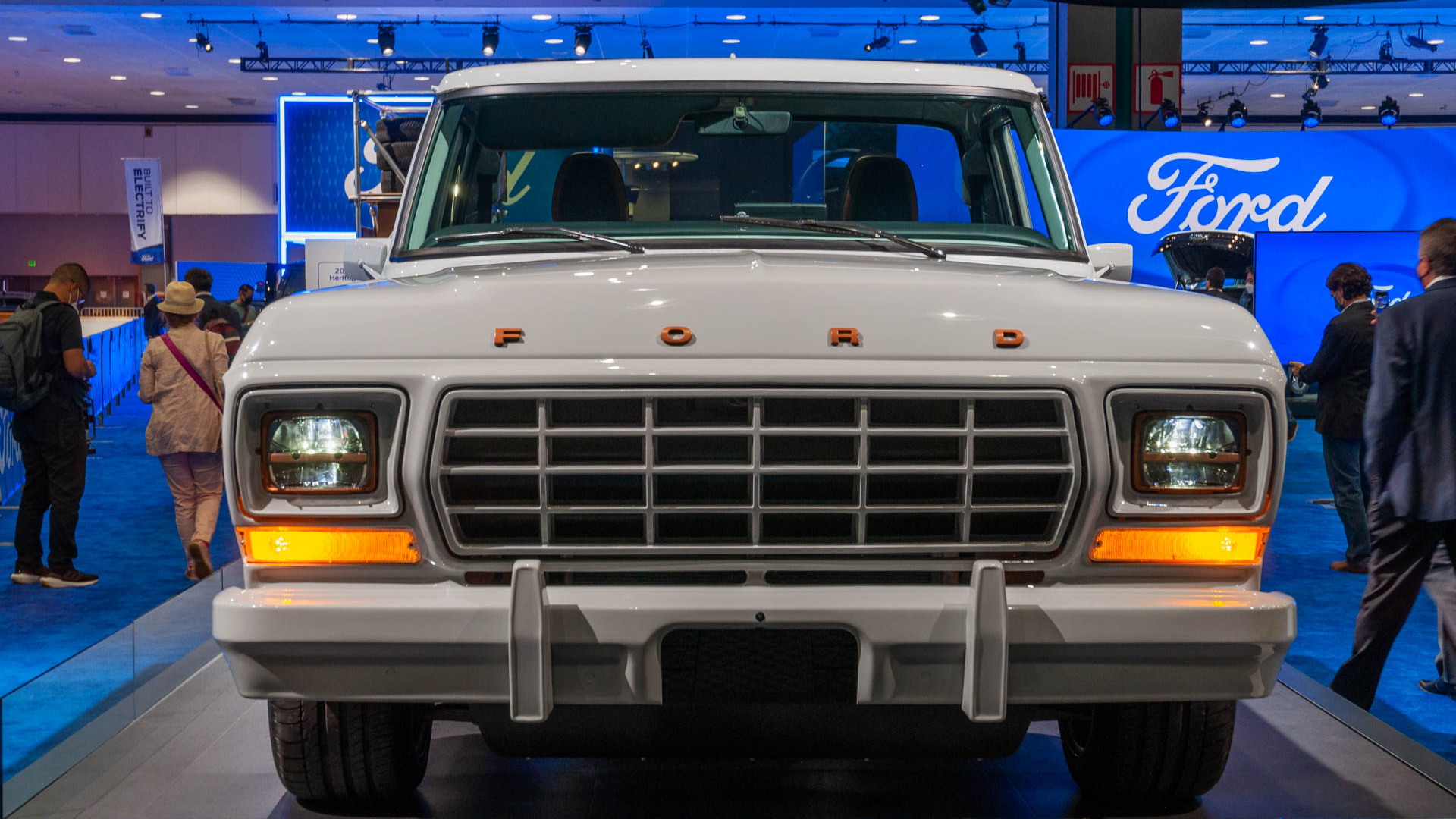 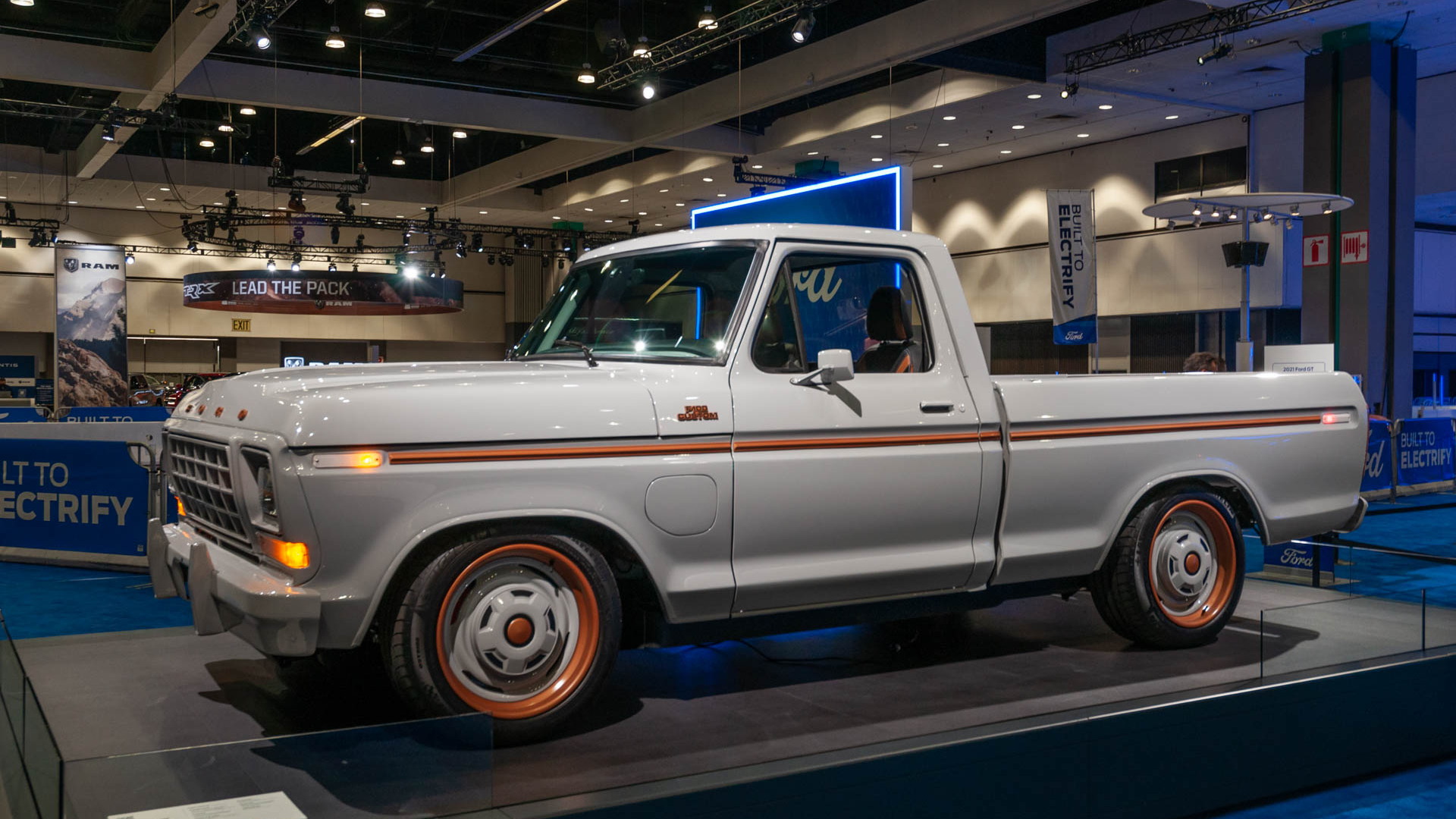 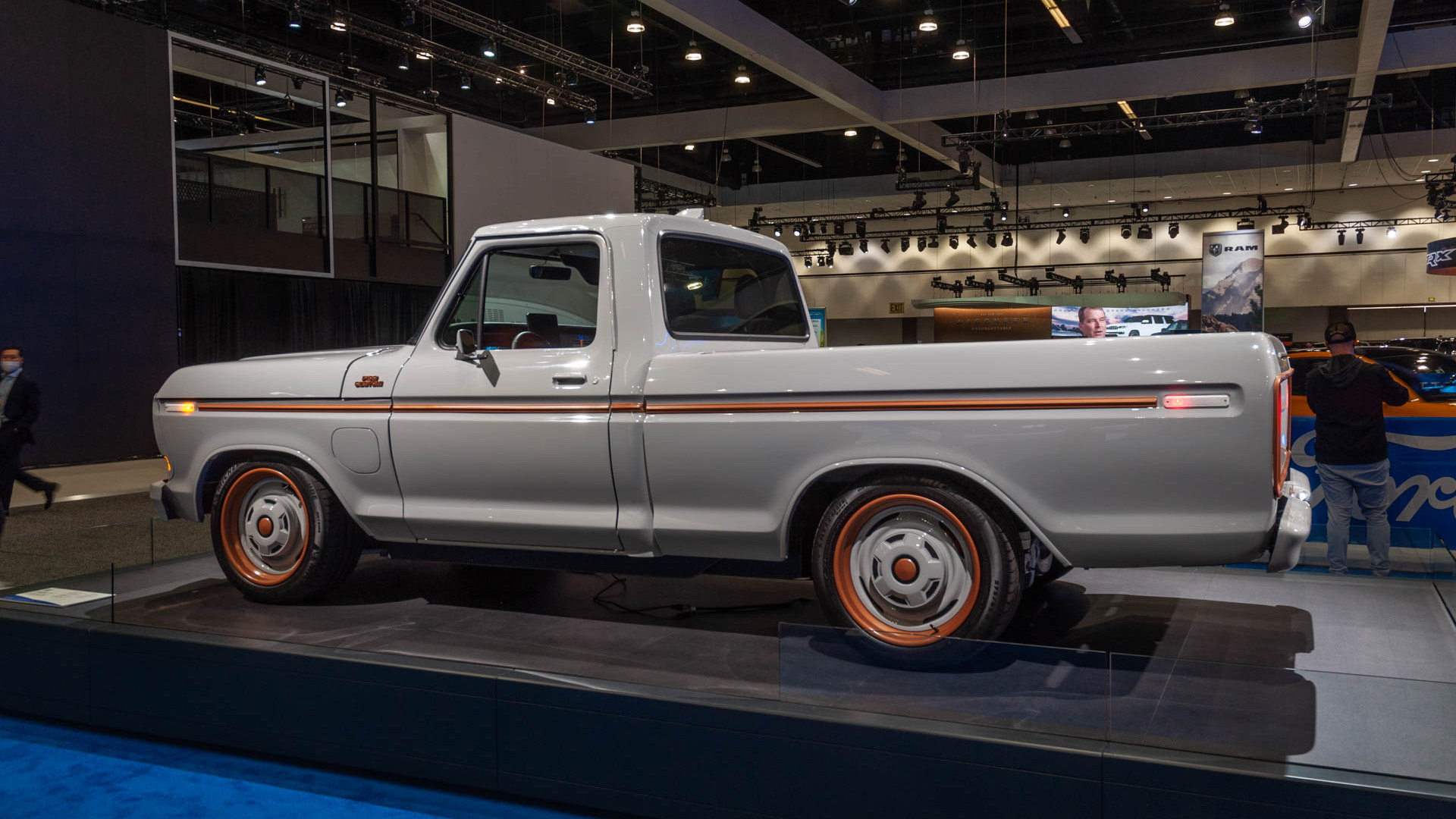 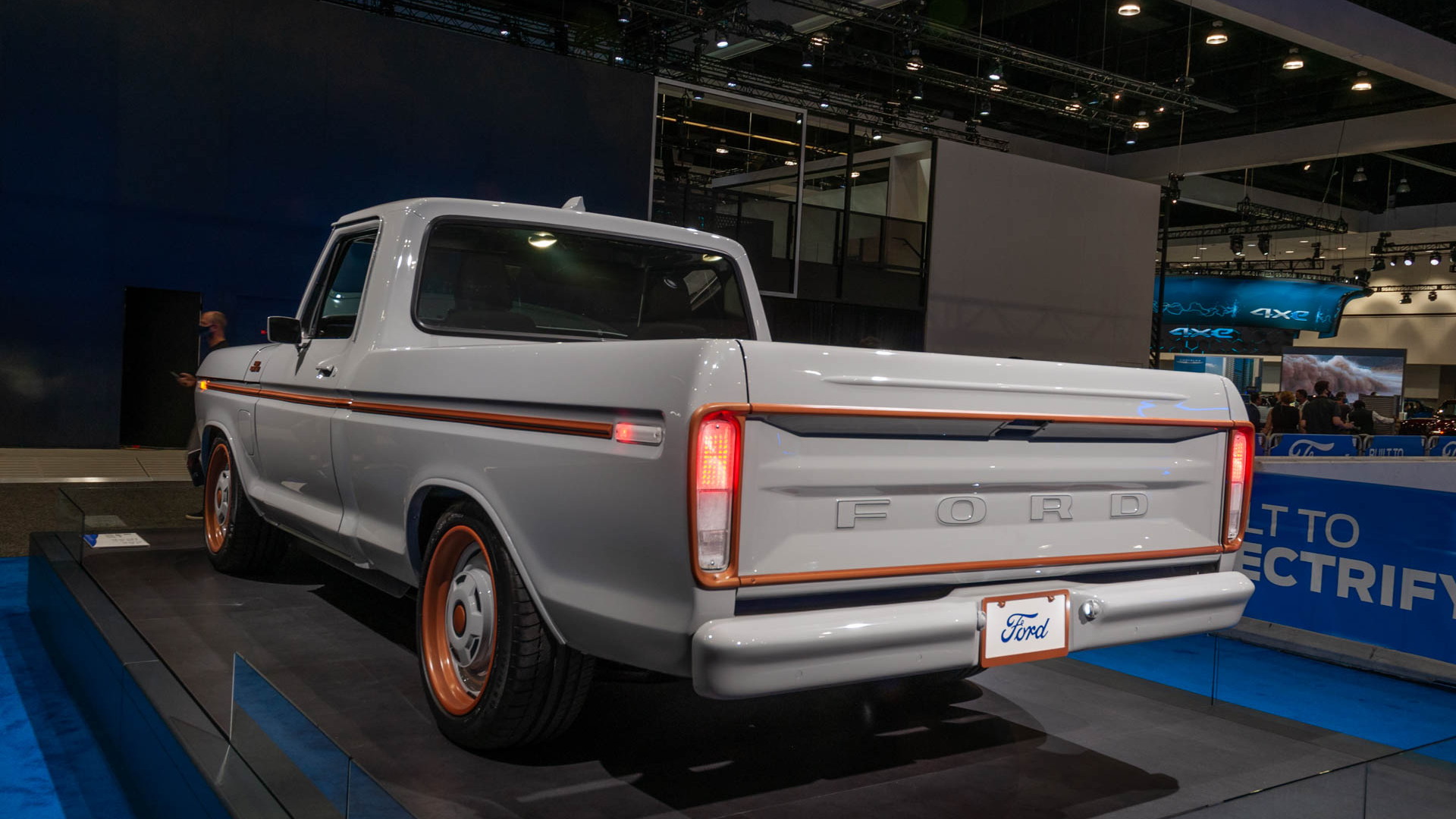 Ford fans keen to start their own electric builds can purchase the Eluminator electric crate motor today for $3,900, using part number M-9000-MACH-E. The motor, which is related to motors used in the Mustang Mach-E GT performance electric crossover, generates a peak 281 hp and 317 lb-ft of torque.

We should note that it is designed for transverse mounting. This means most applications will be front-wheel drive if just the single motor is installed in the engine bay. An alternative is installing the motor at the rear axle.

In the case of Ford's custom F-100, there's an Eluminator at each axle to form an all-wheel-drive system. They've been tuned to deliver a combined 480 hp and 634 lb-ft of torque, which is the same output generated in the Mach-E GT.

Ford built the custom F-100 in partnership with MLe Racecars. It sits on a custom frame and features a new storage area under the hood, made possible by space that was made free by removing the internal-combustion engine.

Of course, the Eluminator requires a lot of extra hardware to get a vehicle moving. The most expensive of these is the battery which will also require significant work to install in a vehicle because of the size and weight. Ford said that it plans to offer more of the hardware required for EV conversions in time, including not only batteries but also controllers and traction inverters in order to deliver a true turnkey solution.

At least one aftermarket company has shown off an electric crate motor. California's Electric GT unveiled one in 2019, shaped like a V-8 gasoline engine, and installed in a vintage Toyota Land Cruiser. Many firms are also offering complete EV conversions, typically for much-loved classic cars.

The SEMA show runs until November 5. For more coverage, head to our dedicated hub.