The new company Bugatti Rimac was officially launched on Tuesday, only four months after it was first announced.

Bugatti Rimac is a joint venture between Porsche and Rimac Group to oversee the running of the Bugatti and Rimac car brands.

Porsche, a member of the Volkswagen Group, which previously oversaw the running of Bugatti, owns 45% of the new Bugatti Rimac joint venture, with Rimac Group owning the remaining 55%. Porsche also owns 22% of Rimac Group, as indicated in the shareholder structure detailed below.

Rimac Group CEO and founder Mate Rimac is CEO of the joint venture, with the permanent headquarters to be part of Rimac Group's expansive technology campus under construction in Zagreb, Croatia. 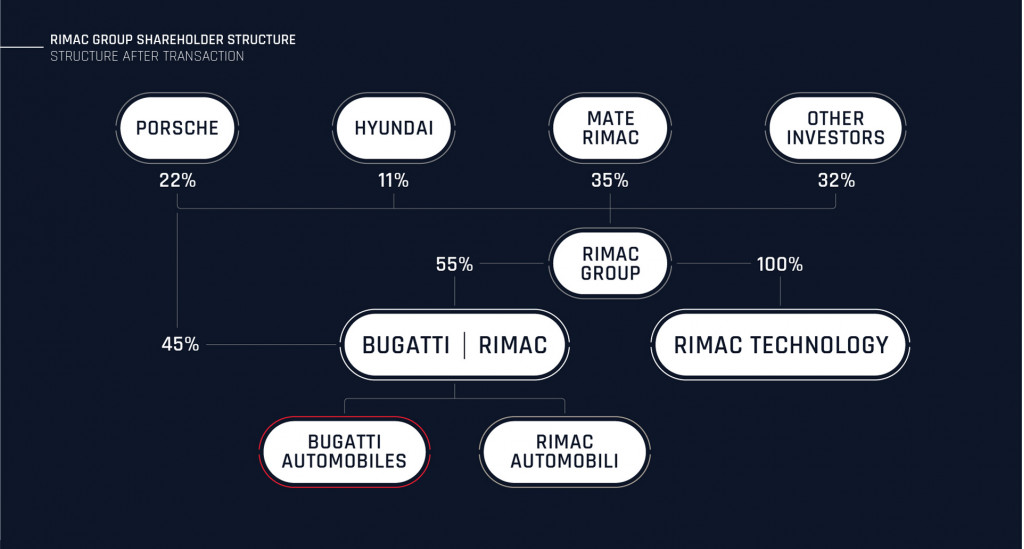 Also on the team is Emilio Scervo. The former chief engineer for mid-engine projects at Aston Martin, Ferrari and McLaren has been appointed chief technology officer at Bugatti Rimac.

Despite the consolidation, Bugatti and Rimac will continue to act as independent brands and retain their respective production sites in France and Croatia, as well as their respective sales channels.

Bugatti Rimac currently has around 435 staff, including 135 at the Bugatti plant in Molsheim, France, and 180 at a VW Group development center in Wolfsburg, Germany.

The launch of Bugatti Rimac comes as Rimac prepares to start production of its Nevera electric hypercar, while Bugatti fills the last of its build slots for the 500-car run of W-16-powered Chirons. Despite partnering with an electric-vehicle technology company, Bugatti won't abandon the internal-combustion engine just yet. Both hybrid and pure electric models are planned within this decade, with the first pure electric Bugatti likely to be a second model line. Previous Bugatti CEO Stephan Winkelmann, currently CEO of Lamborghini, has hinted at a crossover of some sort for the second model line.