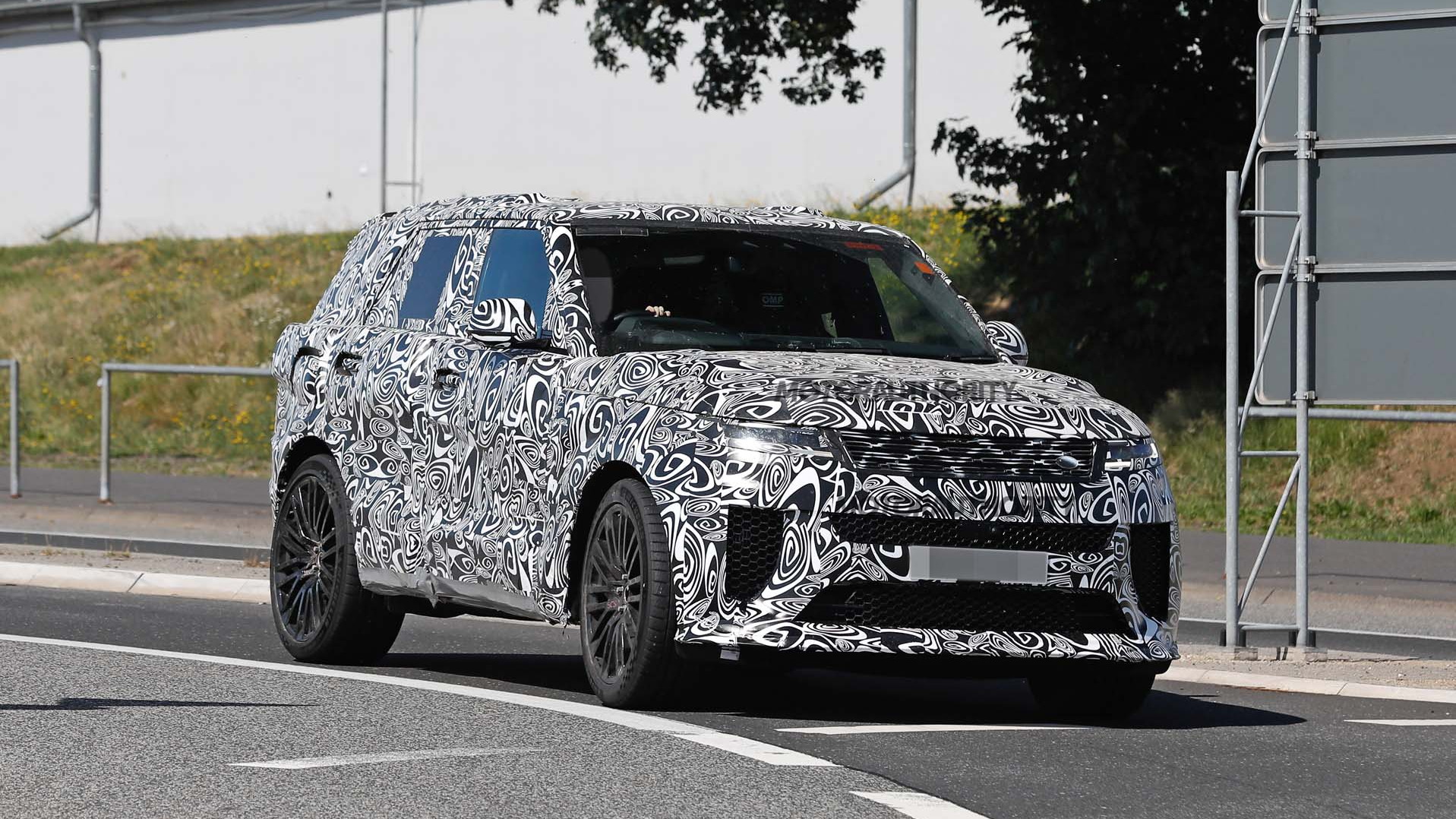 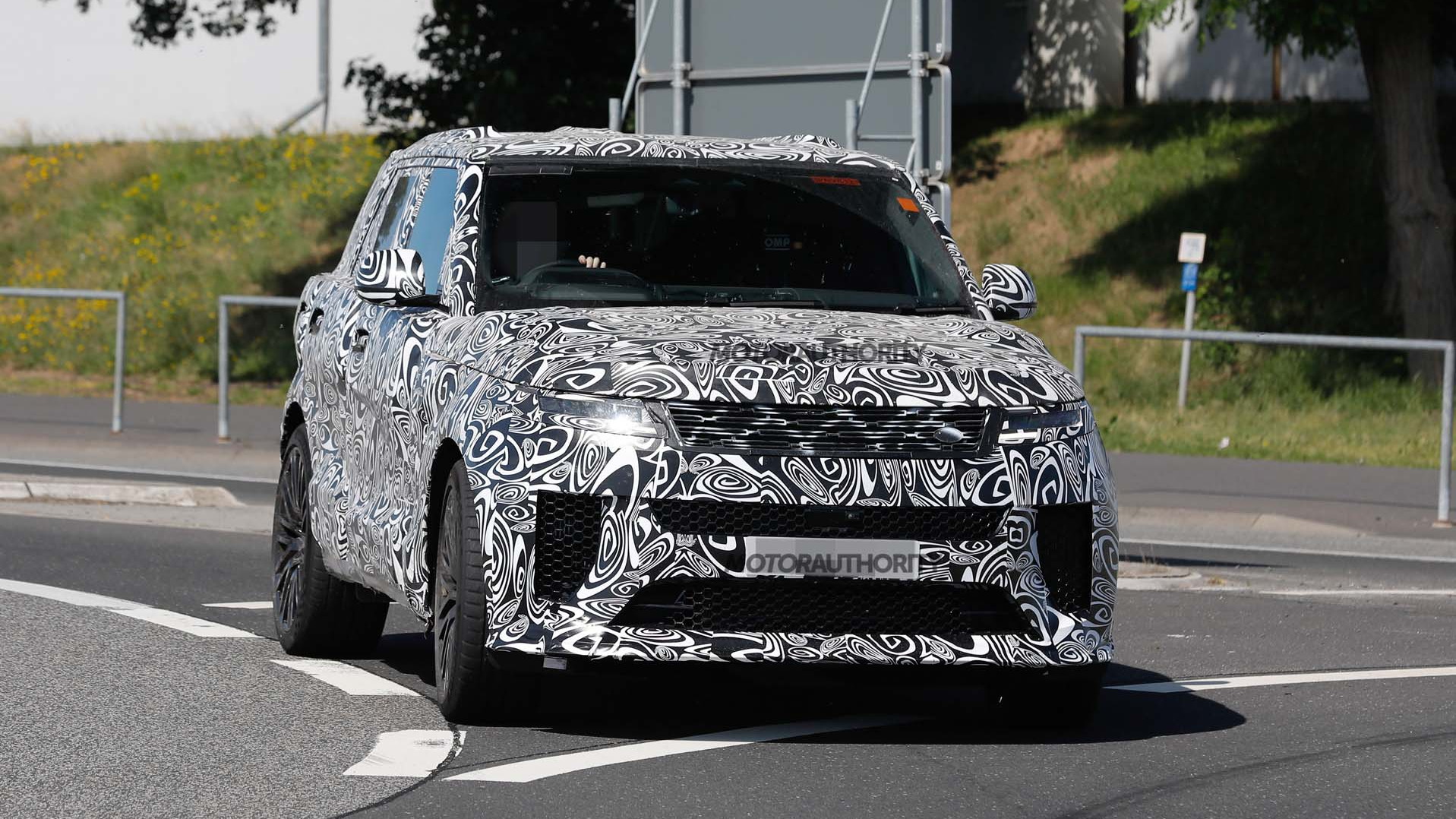 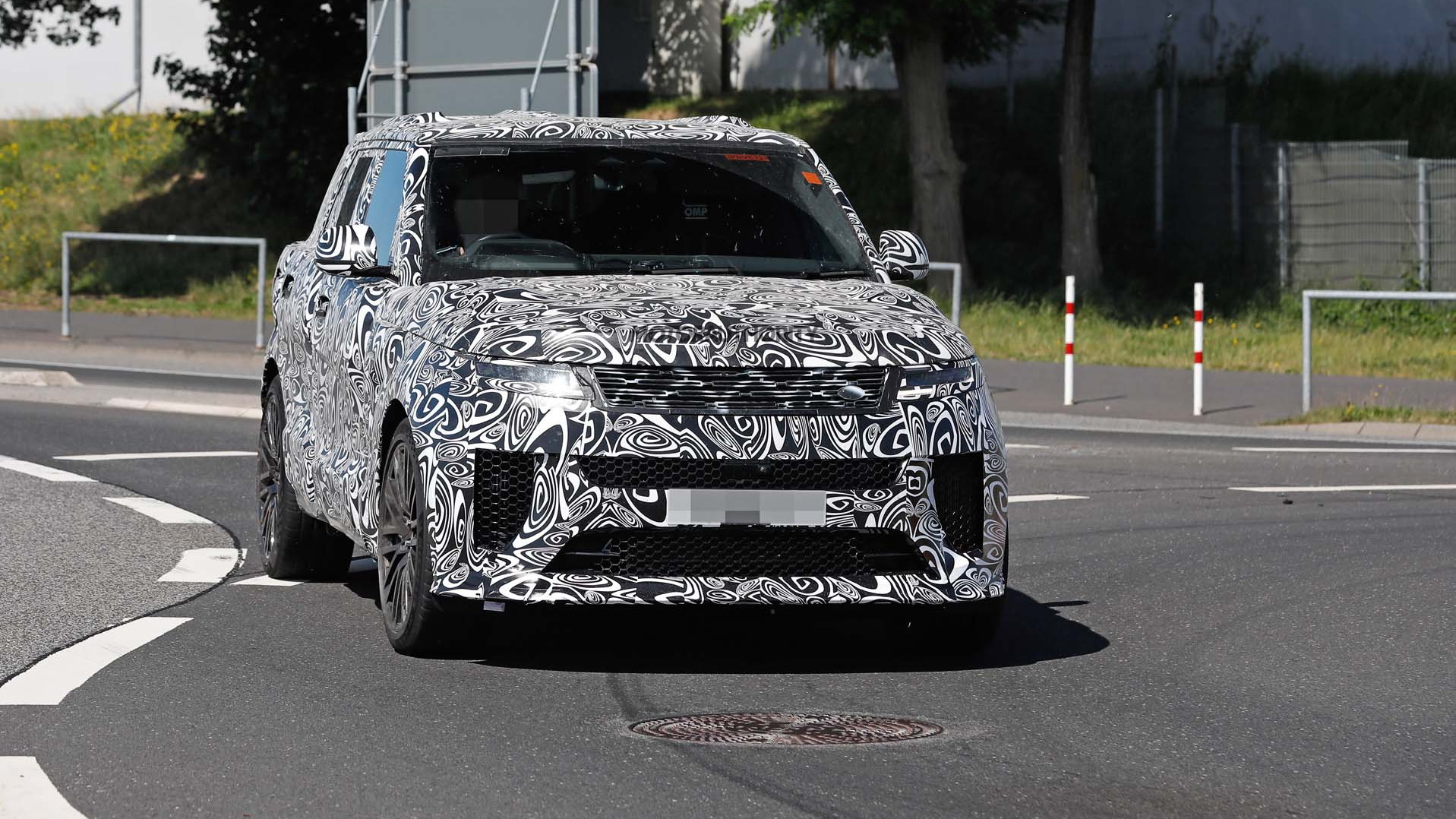 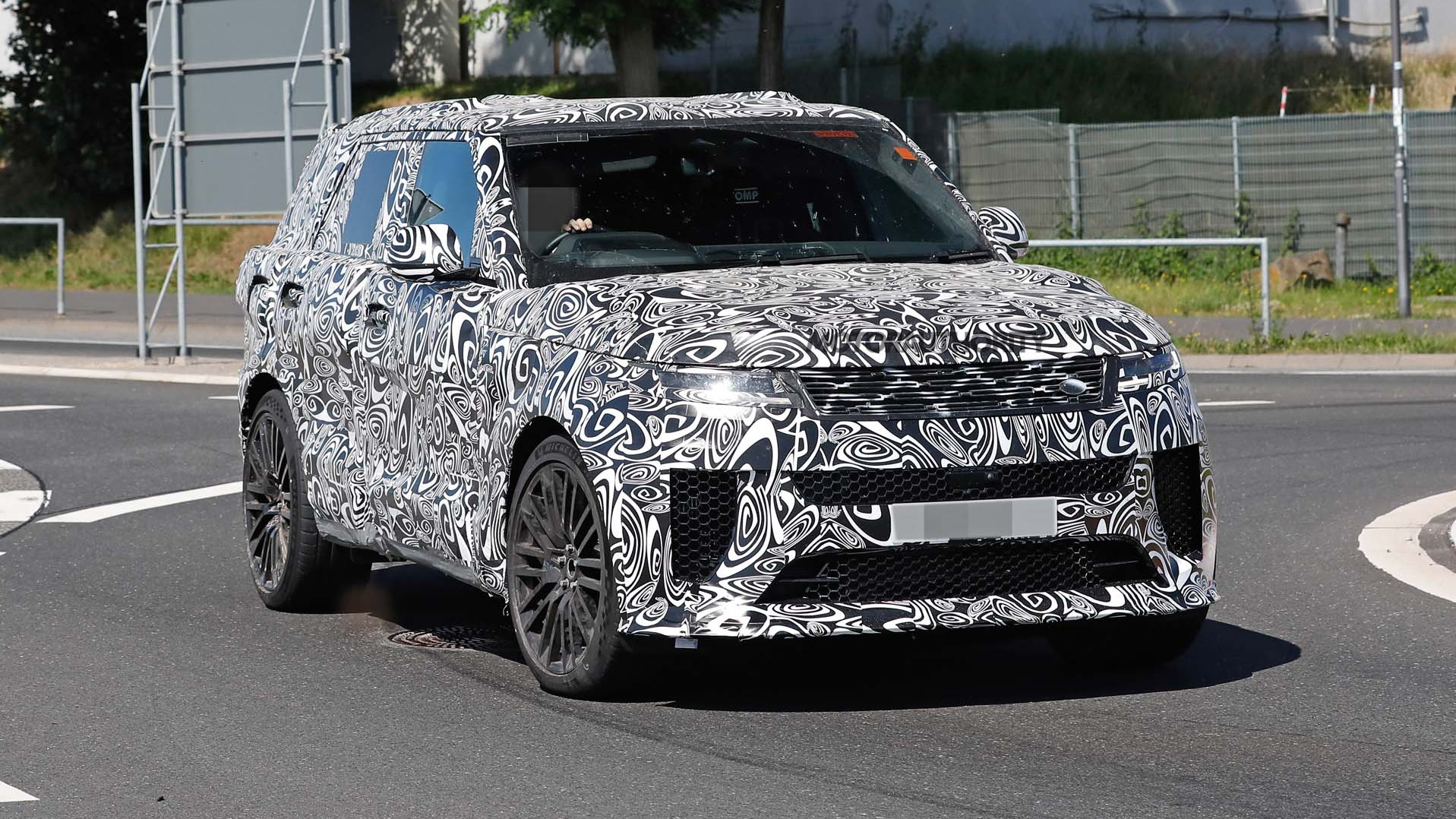 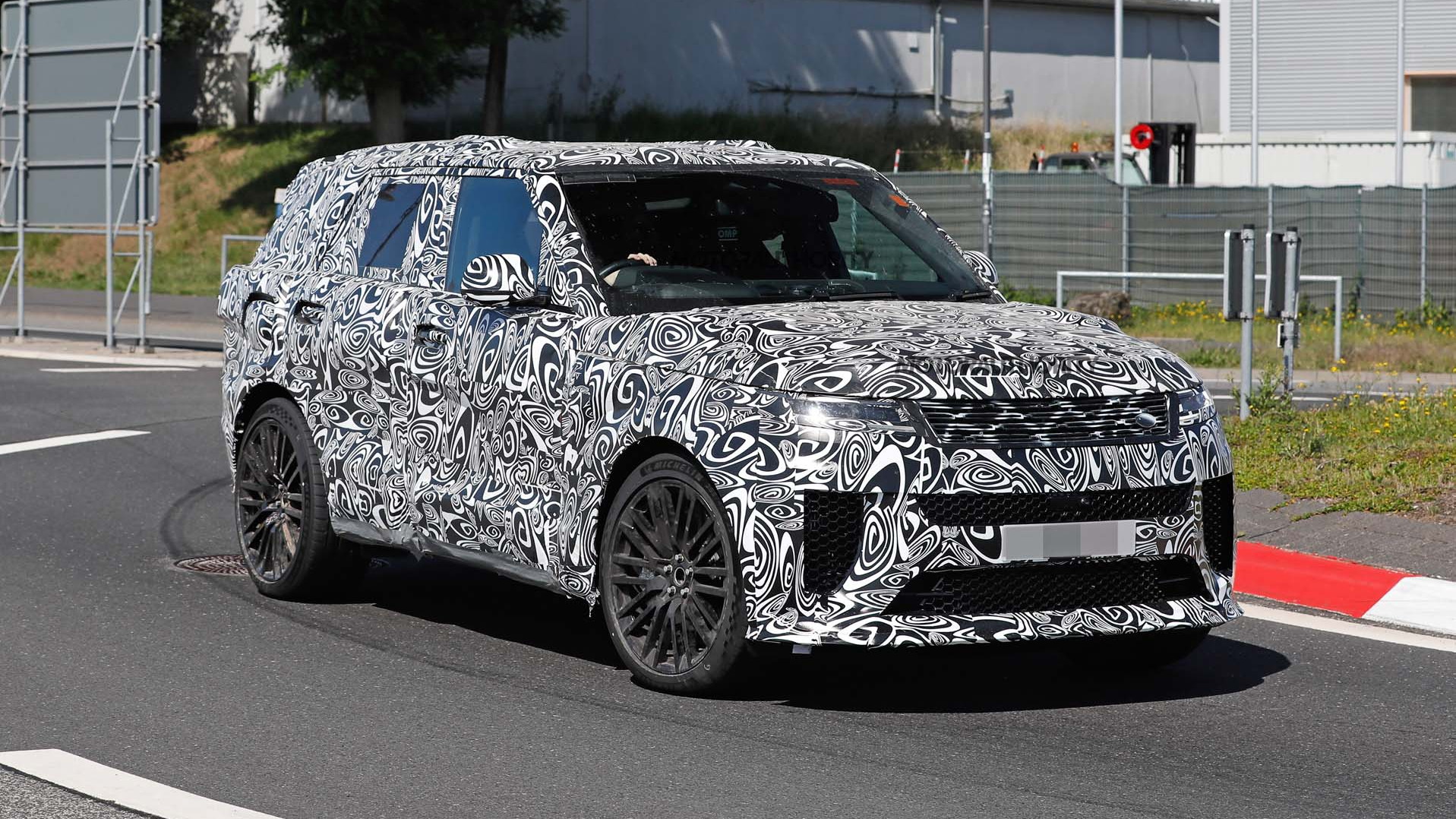 These latest spy shots and video show prototypes for the fire-breathing SUV as nears the end of the road of its long gestation.

The outgoing Range Rover Sport SVR is one of our favorite performance SUVs, and Land Rover has managed to move more than 20,000 of them since the 2014 launch. This popularity is thanks in part to the vehicle's combination of luxury and track capability. In other words, it's an SUV that's not only fast but also comfy. The next one should only improve on these qualities.

We know this is the SVR because of the additional intakes in the front fascia, plus a diffuser integrated into the rear fascia that also houses a pair of exhaust tips on either side. You’ll also notice the enlarged brake rotors and calipers that almost fill the wheels.

Underpinning the redesigned Range Rover and Range Rover Sport is Land Rover's new MLA (Modular Longitudinal Architecture) platform. The platform has been designed to fit both internal-combustion and electric powertrains, and it is also lighter than the D7 platform it replaces. This latter attribute should help improve the performance of the redesigned SVR.

Power will most likely come from a BMW-sourced twin-turbo 4.4-liter V-8, an engine that delivers 523 hp in the regular Range Rover Sport (shown below). Expect power to be close to 600 hp in the SVR version. The old supercharged 5.0-liter V-8 used in the outgoing Range Rover Sport SVR dishes out 575 hp.

Beyond the potent powerplant, the redesigned SVR should also benefit from tweaks to the transmission, suspension, and anti-roll system.

SVR development is handled by Jaguar Land Rover’s personalization department known as SVO. Vehicles with the SVR tag are aimed at offerings from Audi Sport, BMW M, and Mercedes-Benz AMG. Rivals for the Range Rover Sport SVR from those other brands include the Audi RS Q8, BMW X6 M, and Mercedes-Benz AMG GLE 63 Coupe. Interested buyers may also want to consider the Lamborghini Urus and Porsche Cayenne Turbo Coupe.

The redesigned Range Rover Sport has arrived as a 2023 model. The SVR version should arrive early next year as a 2024 model.