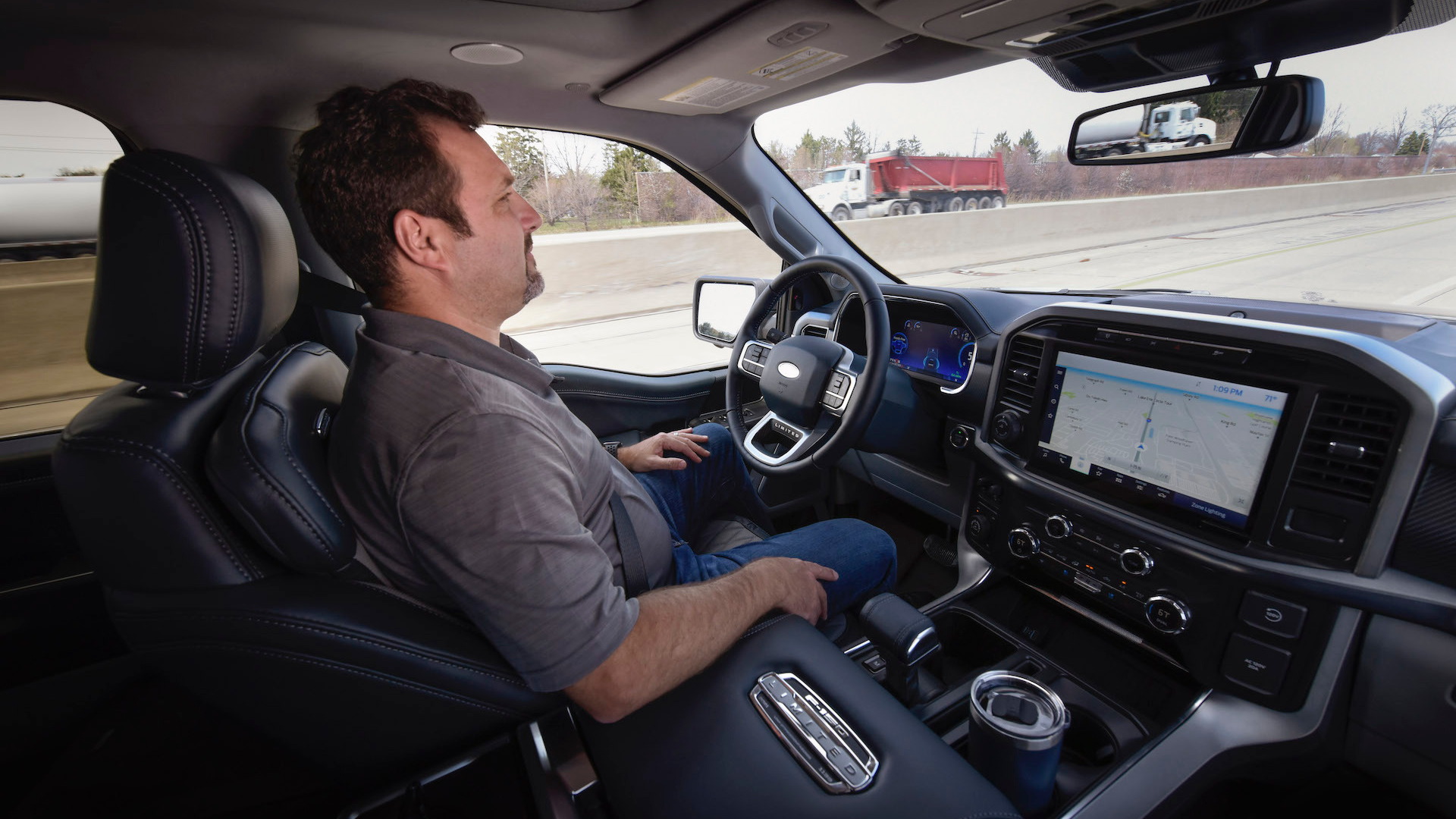 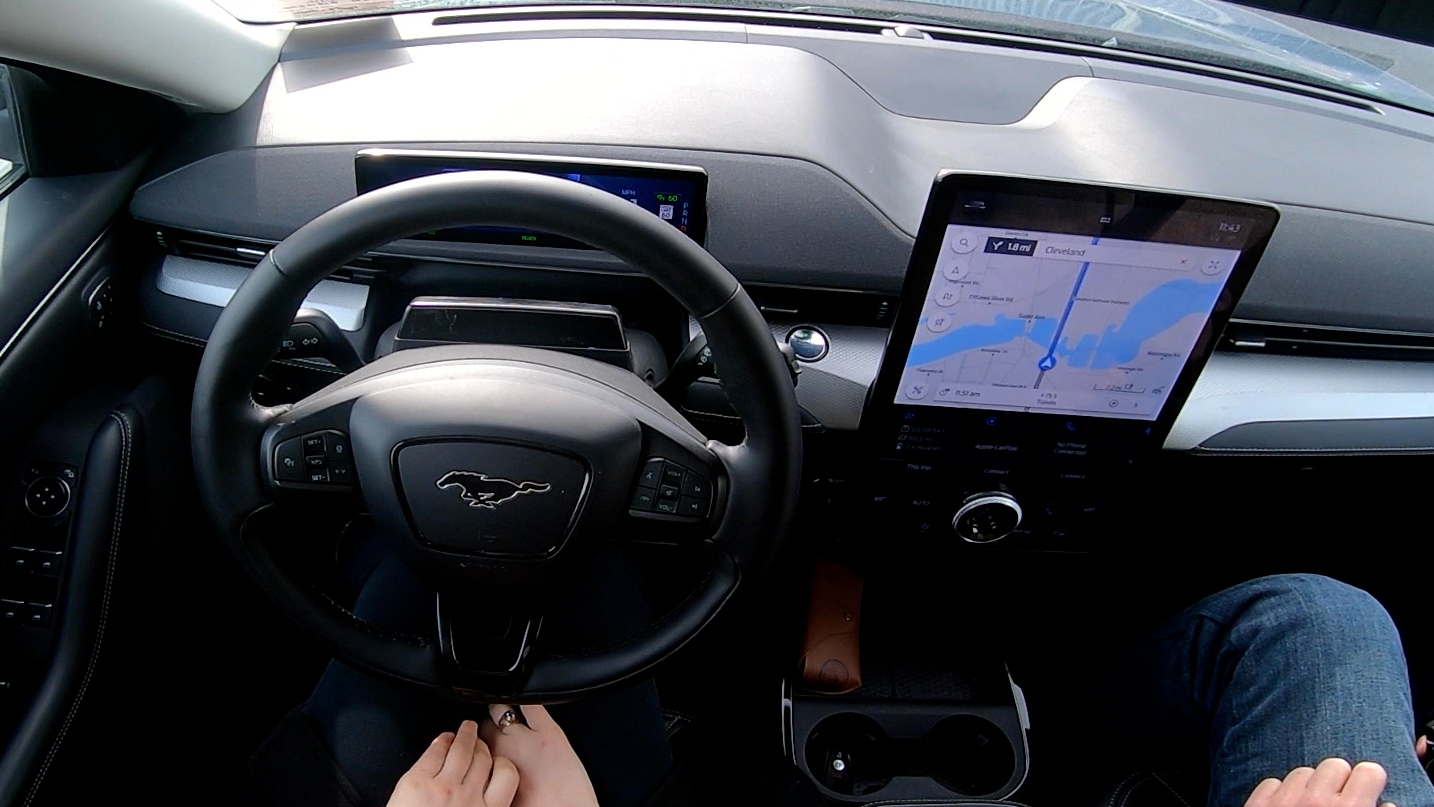 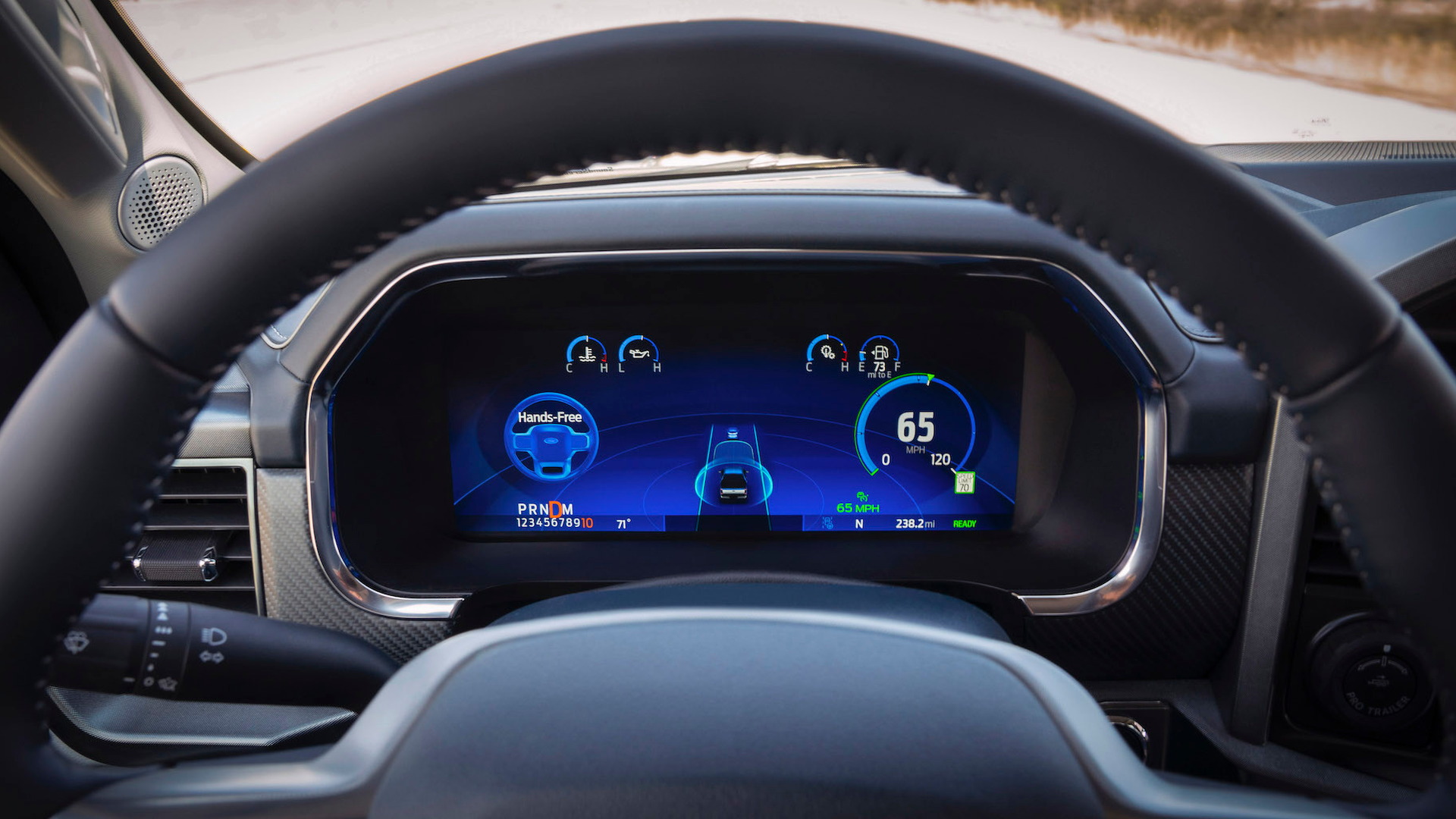 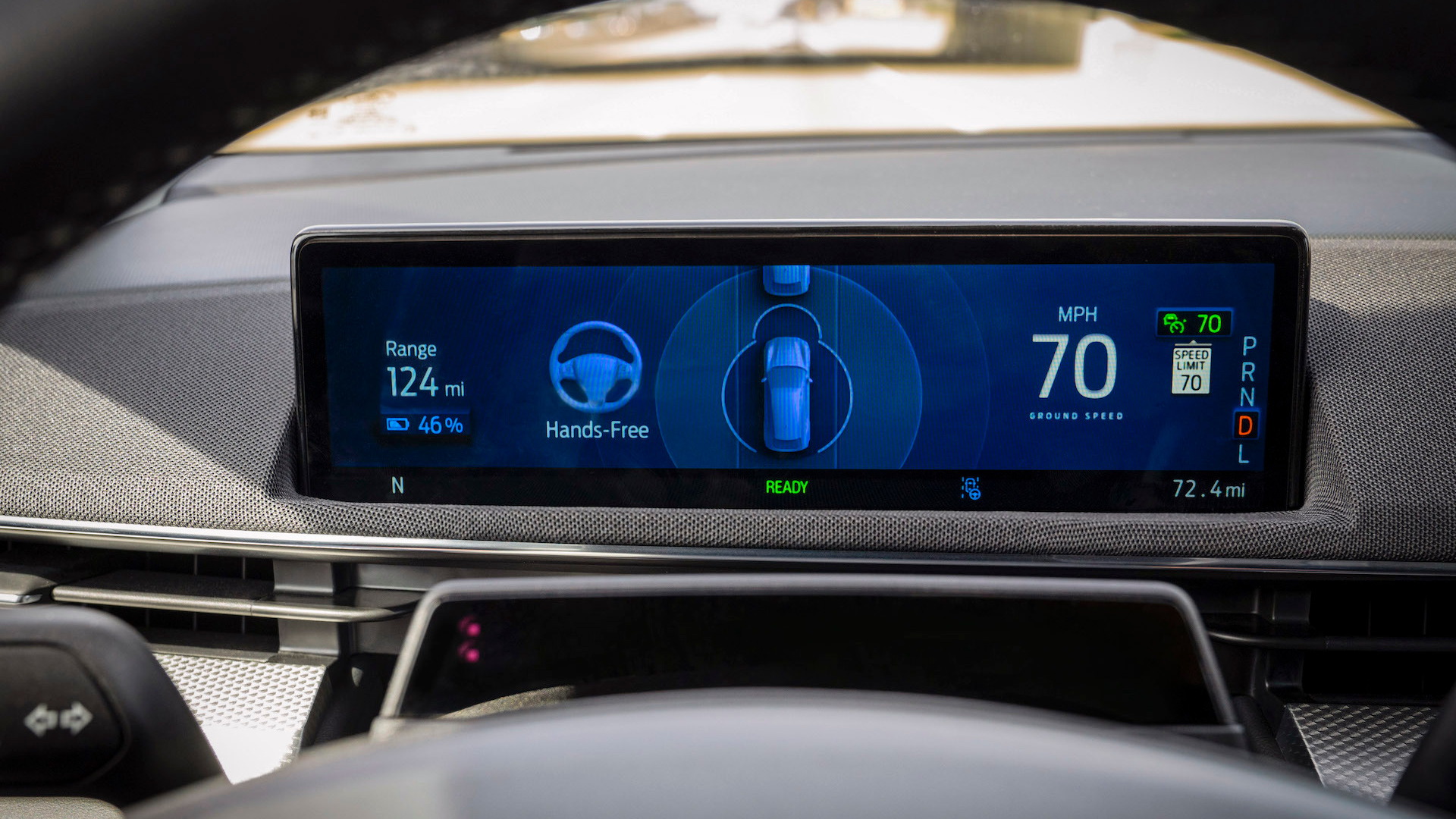 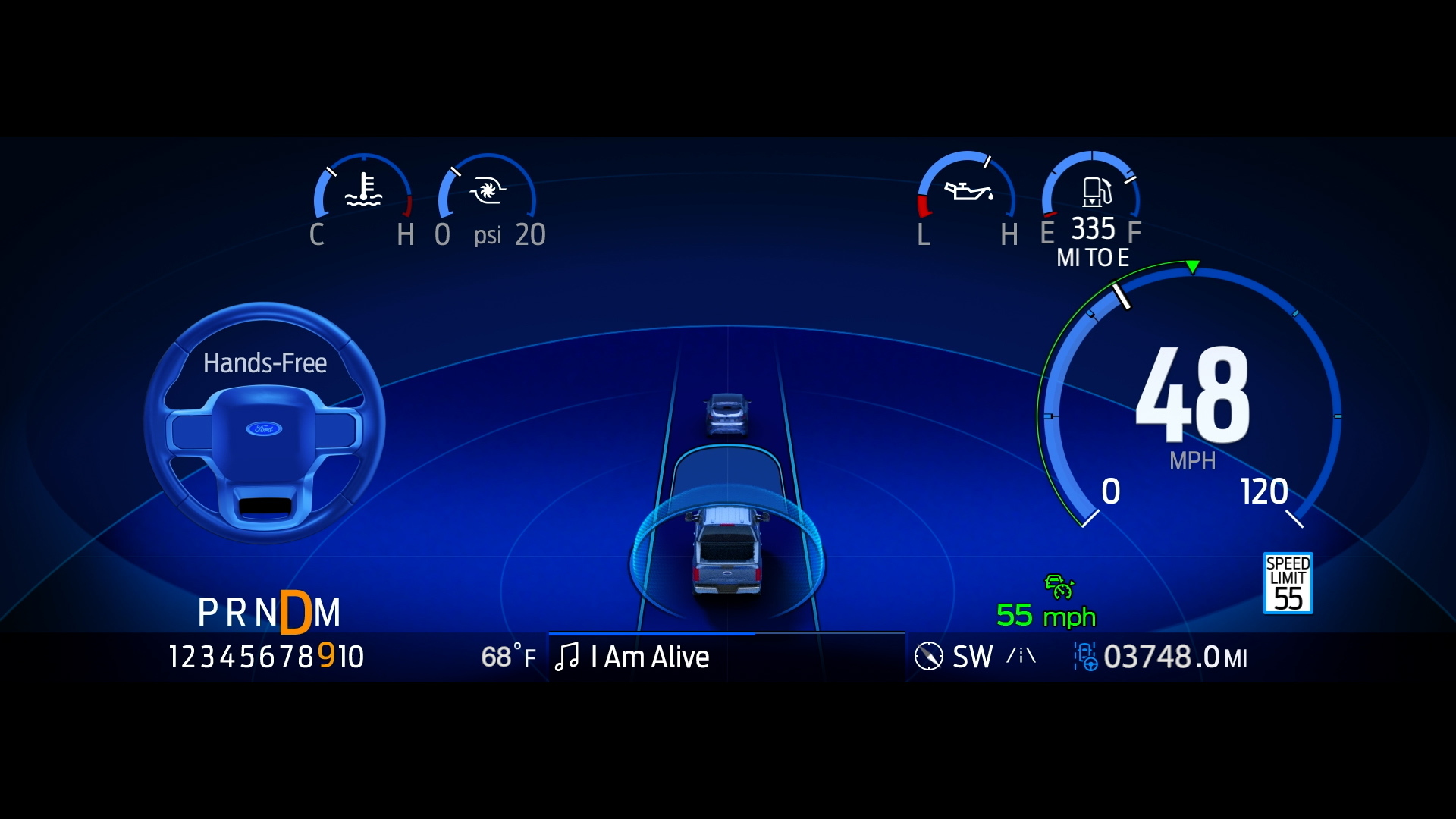 General Motors has Super Cruise and Tesla has Autopilot with Full Self Driving. Now Ford is getting a hands-free driving system of its own. It's called BlueCruise, and it's coming in the third quarter of this year.

Buyers of the 2021 Ford F-150 and 2021 Mustang Mach-E who chose the Co-Pilot360 Active 2.0 Prep package will be able to add the system via an over-the-air update for $600, which buys a three-year subscription. Ford hasn't said how much it will cost year-by-year after that.

The system uses a driver-facing camera, radar, and other cameras to keep the vehicle in its lane. The camera tracks the driver's eyes, even with sunglasses on, and the system prompts drivers to pay attention if they get distracted. A blue zone appears in the instrument cluster when the system is available for use.

BlueCruise will operate the steering, braking, and throttle on more than 100,000 miles of mapped, divided highways in the U.S. and Canada as long as the driver keeps his/her eyes on the road. Because the driver is required to monitor things at all times, the system still ranks at Level 2 on the SAE scale of self-driving capability.

Ford said future updates will add the ability to automatically change lanes and adjust the speed for upcoming curves and roundabouts. GM's Super Cruise can also move the vehicle to exit ramps when a navigation destination is programmed, but Ford didn't comment on that capability. However, Ford did say BlueCruise will have a function that centers the vehicle in its lane when hands-free driving isn't available.

Ford tested BlueCruise over more than 500,000 miles of real-world driving, using the software during the day and at night and in clear and stormy conditions in nearly every state. Ford engineers also tested the system over what they call the mother of all road trips last November and December. The trip involved 10 vehicles (five F-150s and five Mustang Mach-Es) that covered 110,000 miles through 37 U.S. states and five Canadian provinces over 62 days.

Ford previously called the system Active Drive Assist for both the Mustang Mach-E and F-150, but now it's rebranded BlueCruise.

On the 2021 F-150, BlueCruise will be standard on the Limited model, and available for the Lariat, King Ranch, and Platinum models in the $1,595 Co-Pilot360 Active 2.0 package. The Mustang Mach-E will get it standard on the CA Route 1, Premium, and First Edition models, and it will be included in the $3,200 Comfort and Technology package for other versions. Ford expects sell BlueCruise in 100,000 vehicles in the first year, and says it will add more roads and roll out the technology to other vehicles in the future.