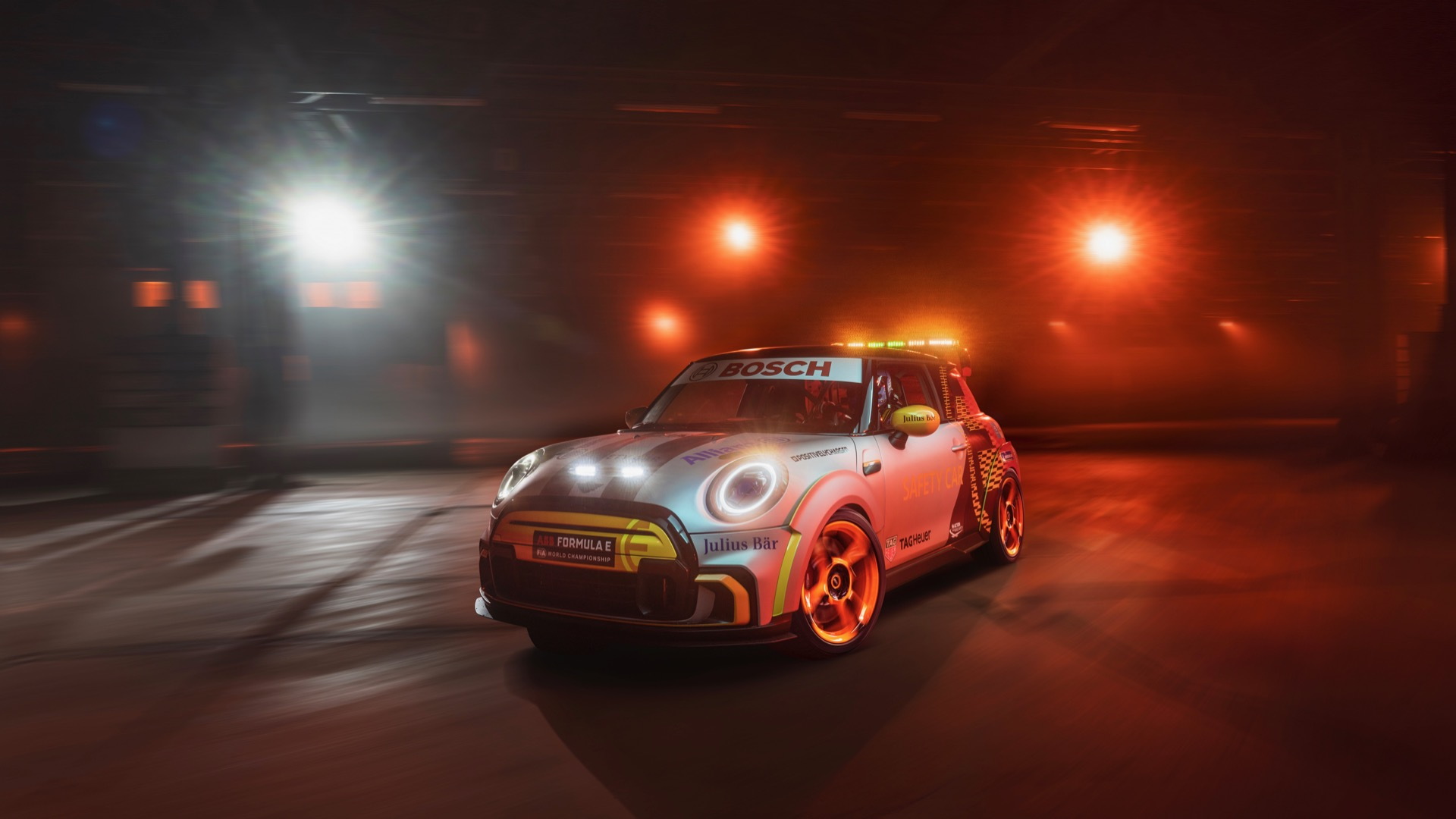 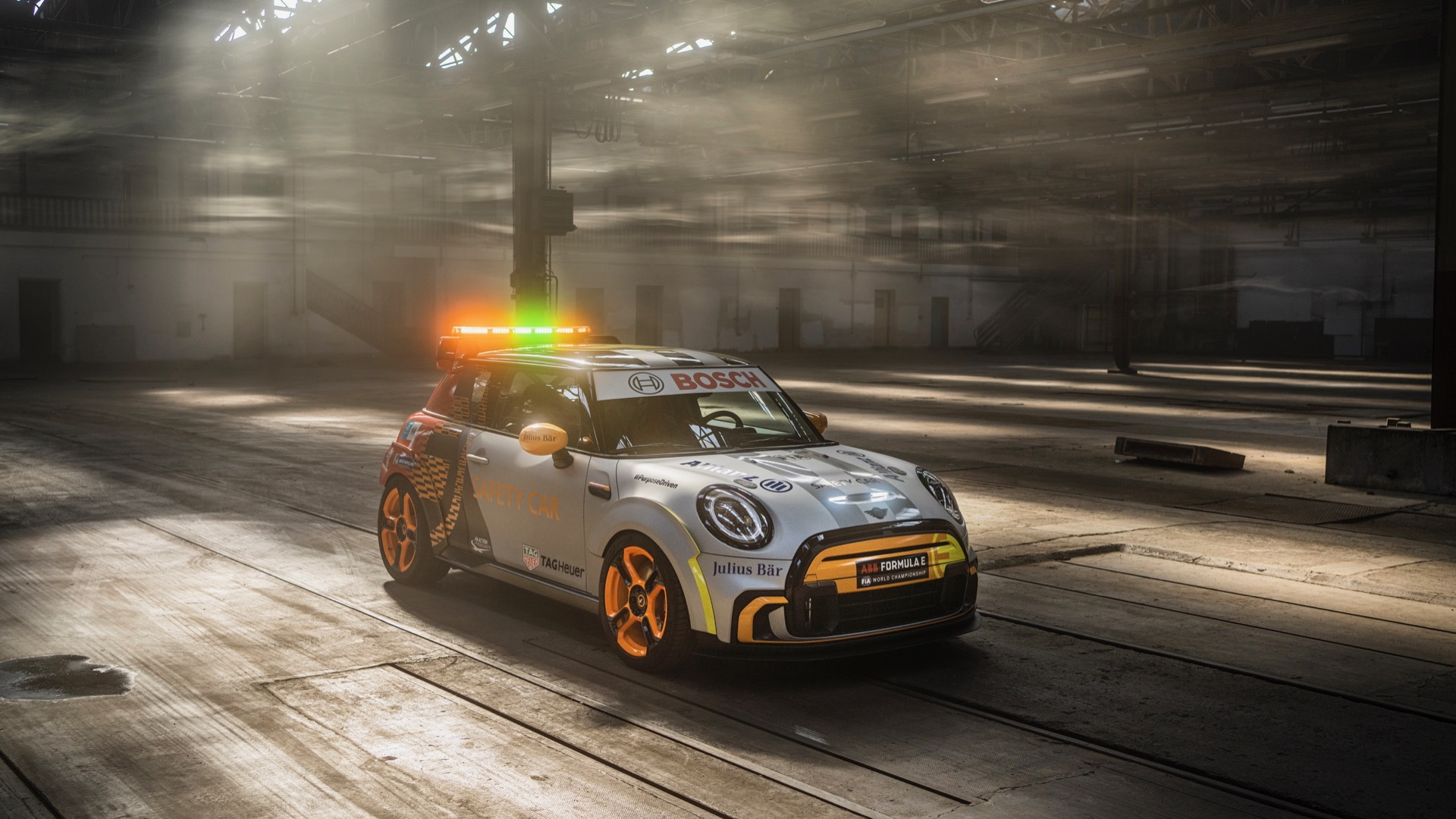 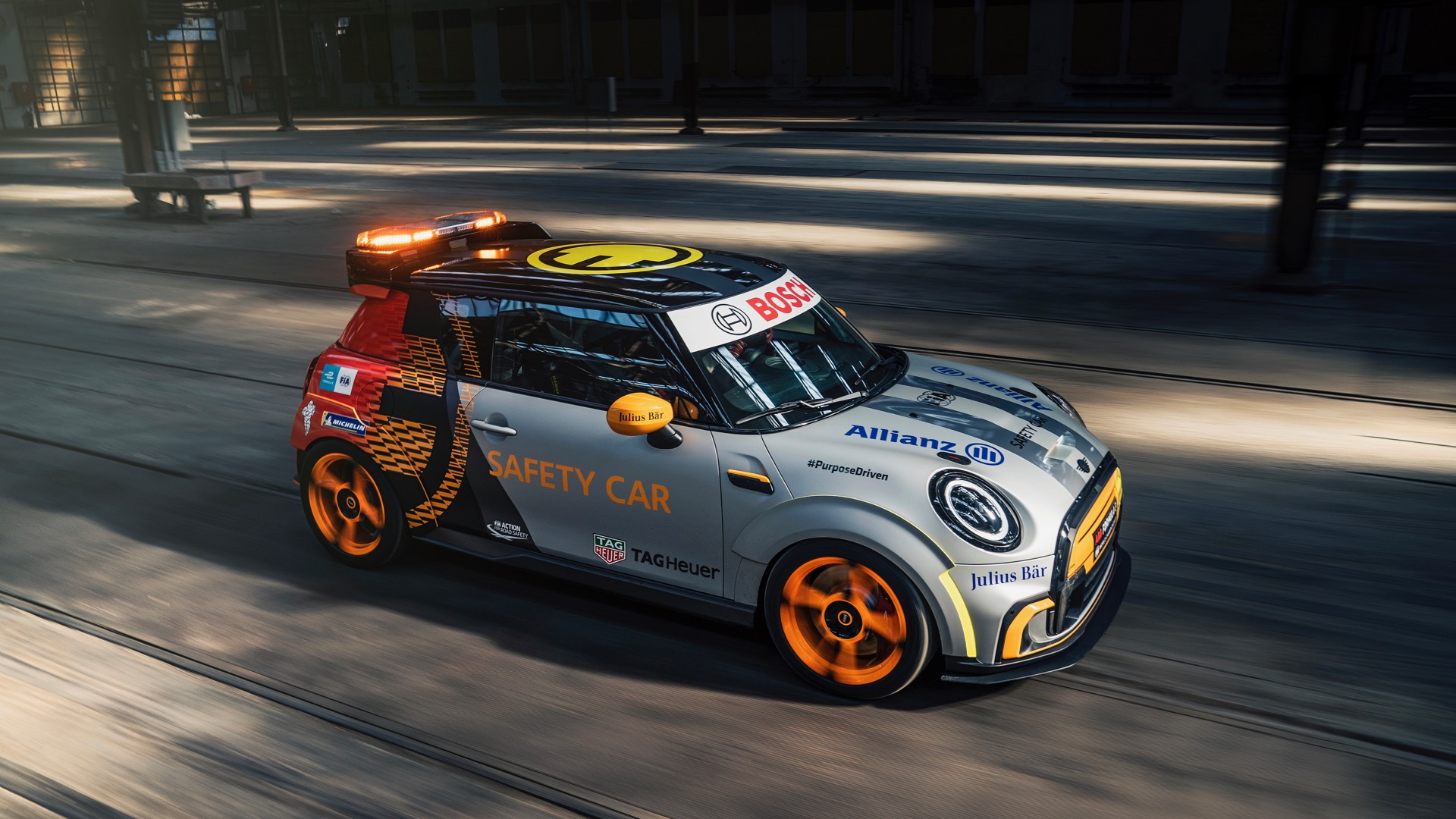 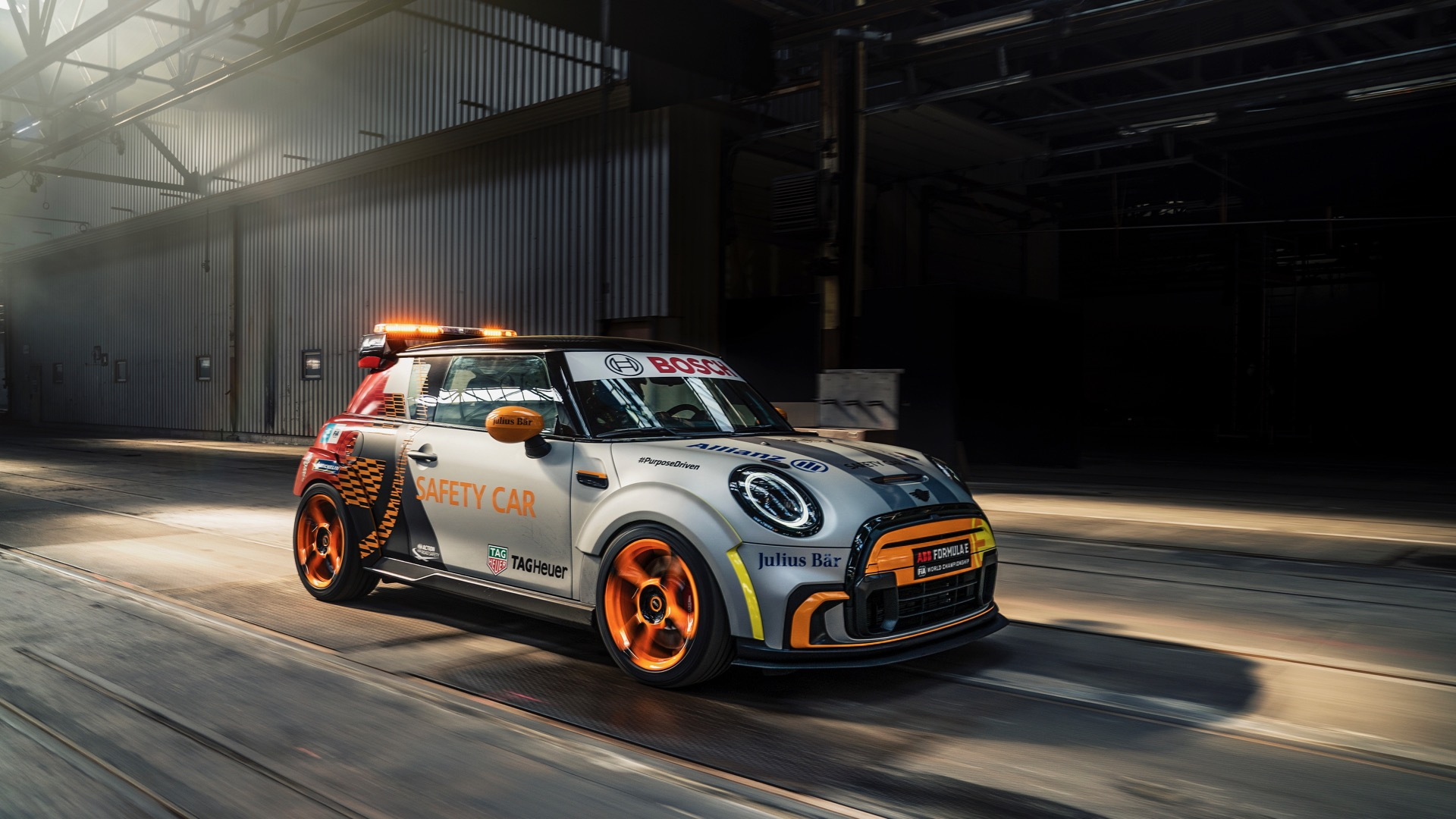 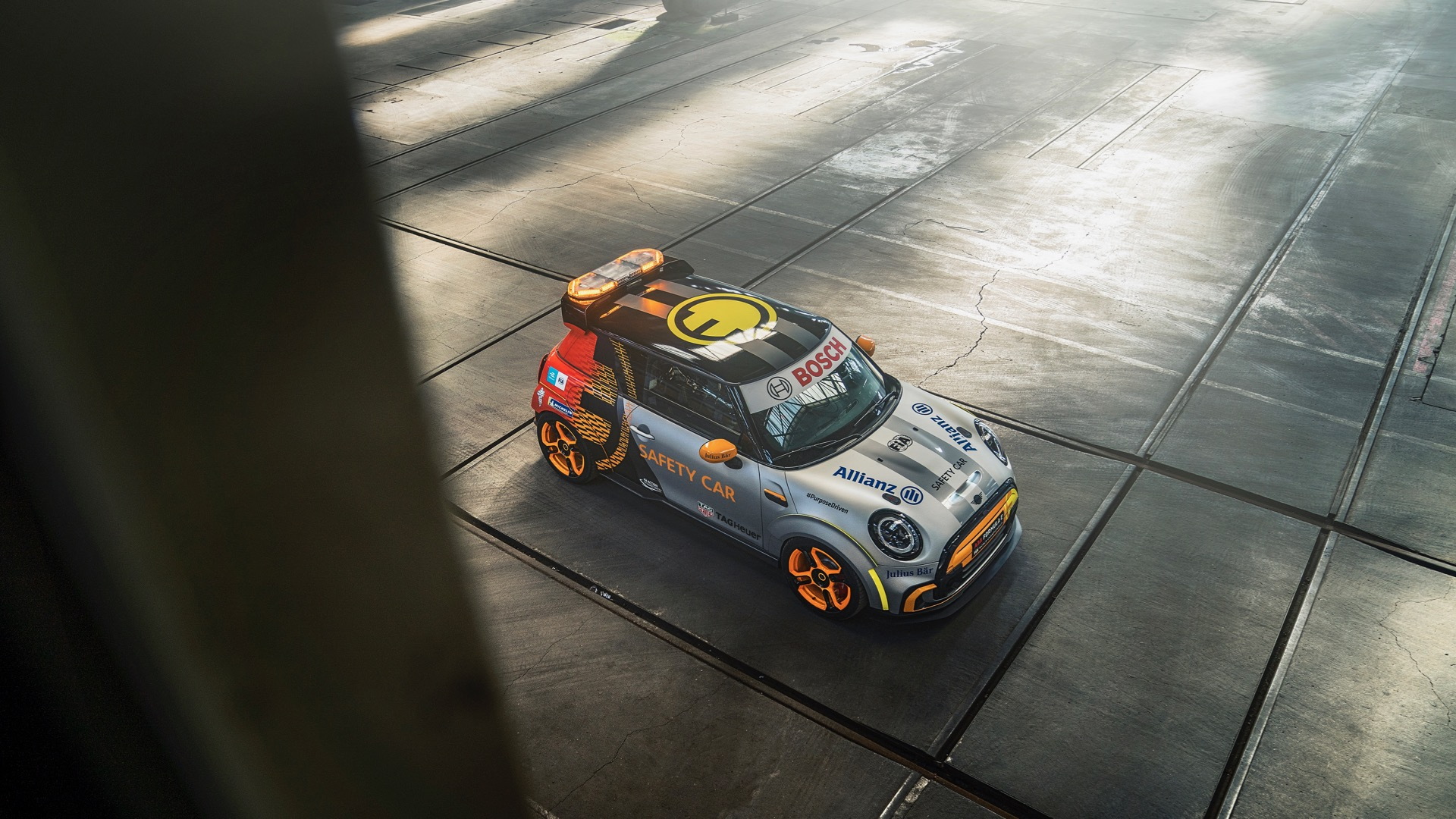 The Mini Cooper SE recently launched as the brand's first mass-market electric car, but now Mini is hinting at hotter versions of the electric hatchback. On Tuesday, the automaker unveiled a Cooper SE-based safety car for the Formula E electric racing series pointing in that direction. It will debut at the Formula E Rome E-Prix on April 10.

Dubbed Mini Electric Pacesetter inspired by JCW, the safety car was built to demonstrate what an electric John Cooper Works performance model could be, a Mini press release said. While it is a one-off build not designed for use on public roads, it shows "one of the directions we could take with the electrification of the JCW brand," Mini boss Bernd Körber said in a statement.

Designers gave the Mini Electric Pacesetter large fender flares, a rear diffuser, and a big rear wing, not unlike the one used on the current gasoline JCW GP hatch. Functional elements include front brake-cooling ducts and an array of lights. The wheel spats and spoilers were 3D printed from recycled carbon fiber.

The Pacesetter is powered by the same electric motor as the standard Cooper SE, with the same 181 hp but also 206 pound-feet of torque—7 lb-ft more than the standard car. Mini also gutted the interior, giving the Pacesetter a 2,711-pound curb weight. That's about 286 pounds less than the Cooper SE, according to Mini.

That weight reduction allows the Pacesetter to accelerate from 0-62 mph in 6.7 seconds, compared to 7.3 seconds for the Cooper SE. Midrange acceleration is improved as well, which is important for a safety car that has to maintain a suitable pace on track.

Mini confirmed plans for an electric JCW model in December 2020, but didn't say when it would start production. We do know that the current-generation Mini platform is nearing the end of its lifespan, and that a fourth-generation model is expected around 2023. Parent company BMW recently said the Mini brand will be all-electric by the early 2030s, and will launch its last combustion-engine car in 2025.

Meanwhile, the 2022 Mini Cooper SE gets the same subtle facelift as the gasoline Cooper Hardtop upon which it's based. It has no powertrain changes, however, so the Cooper SE still has a fairly low 110-mile range.