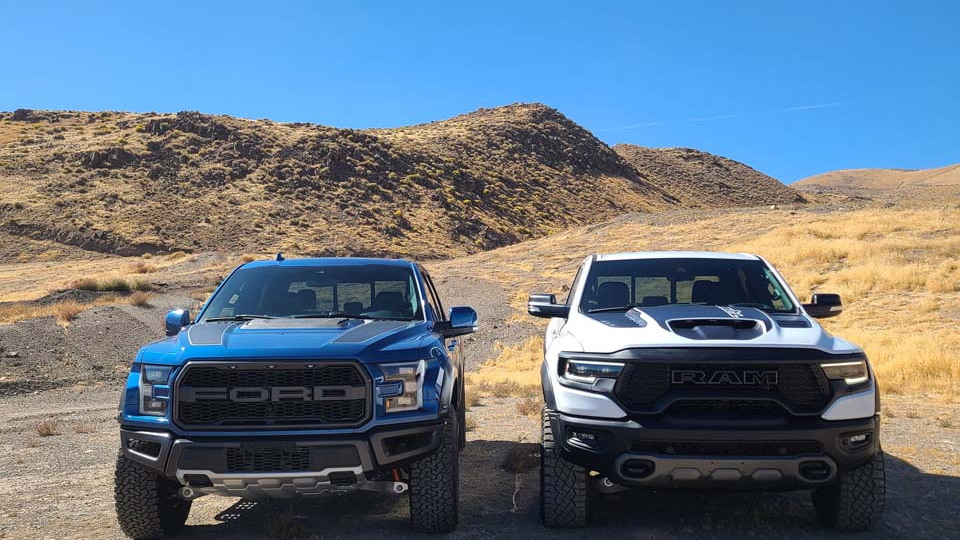 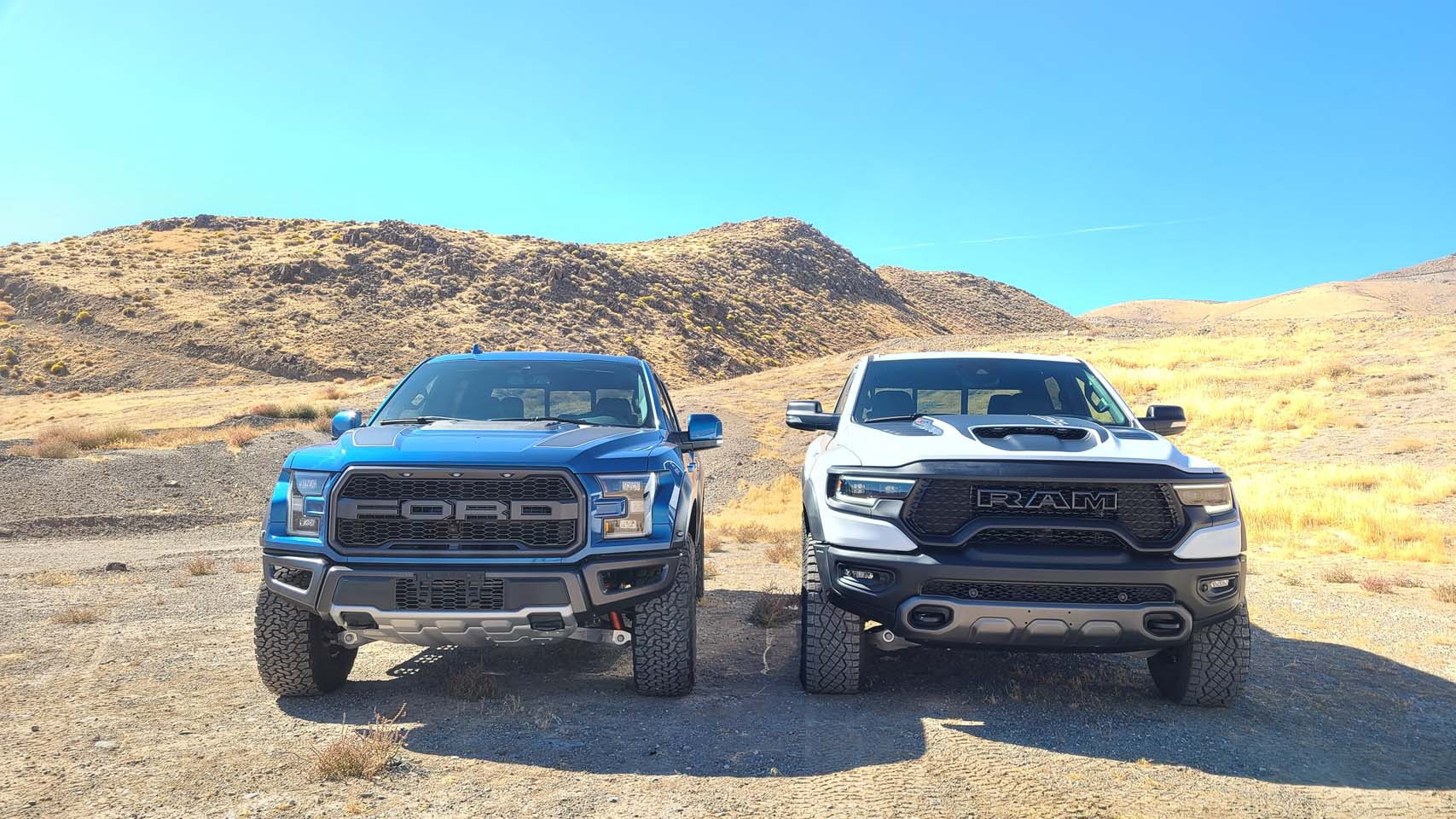 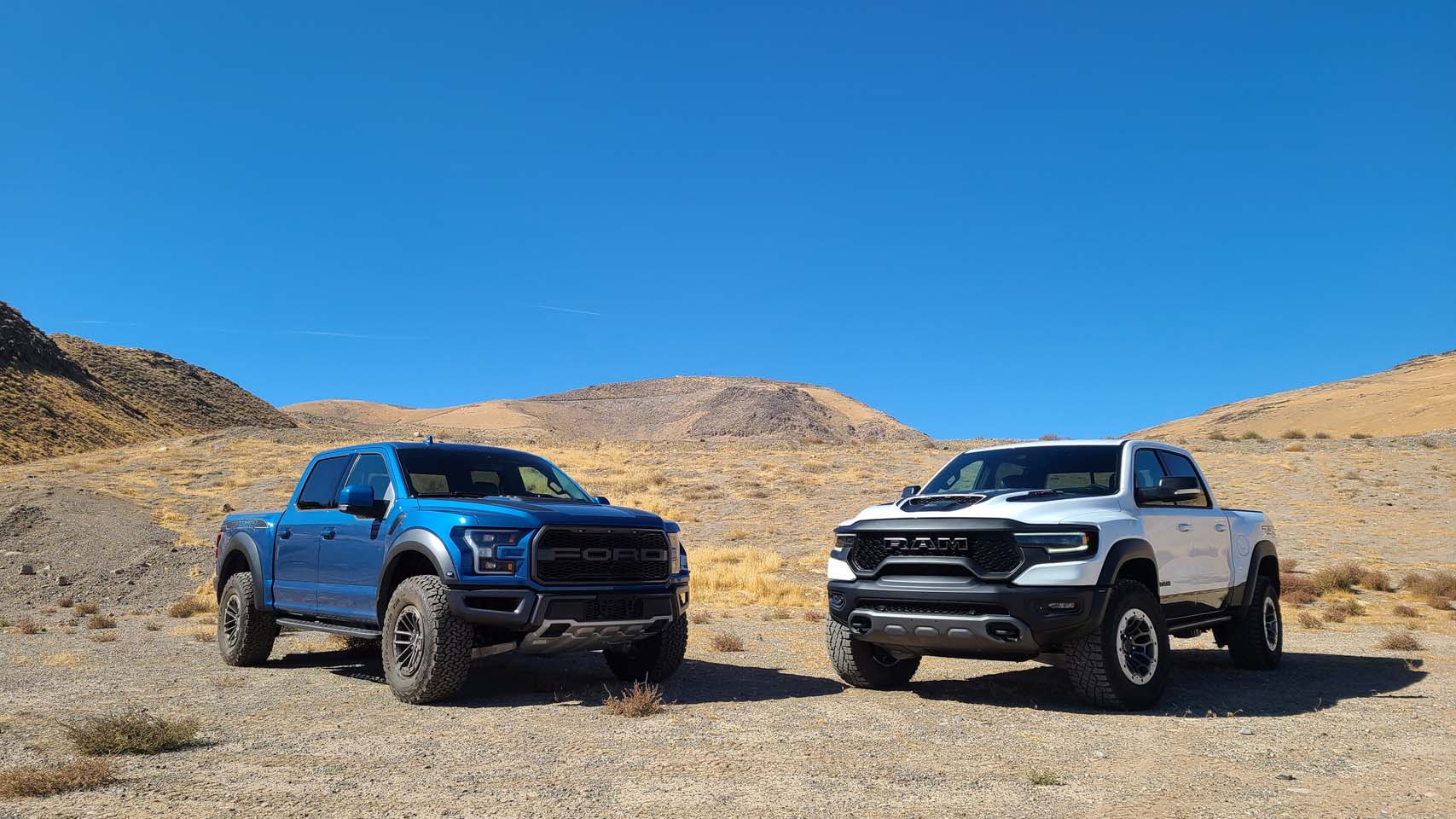 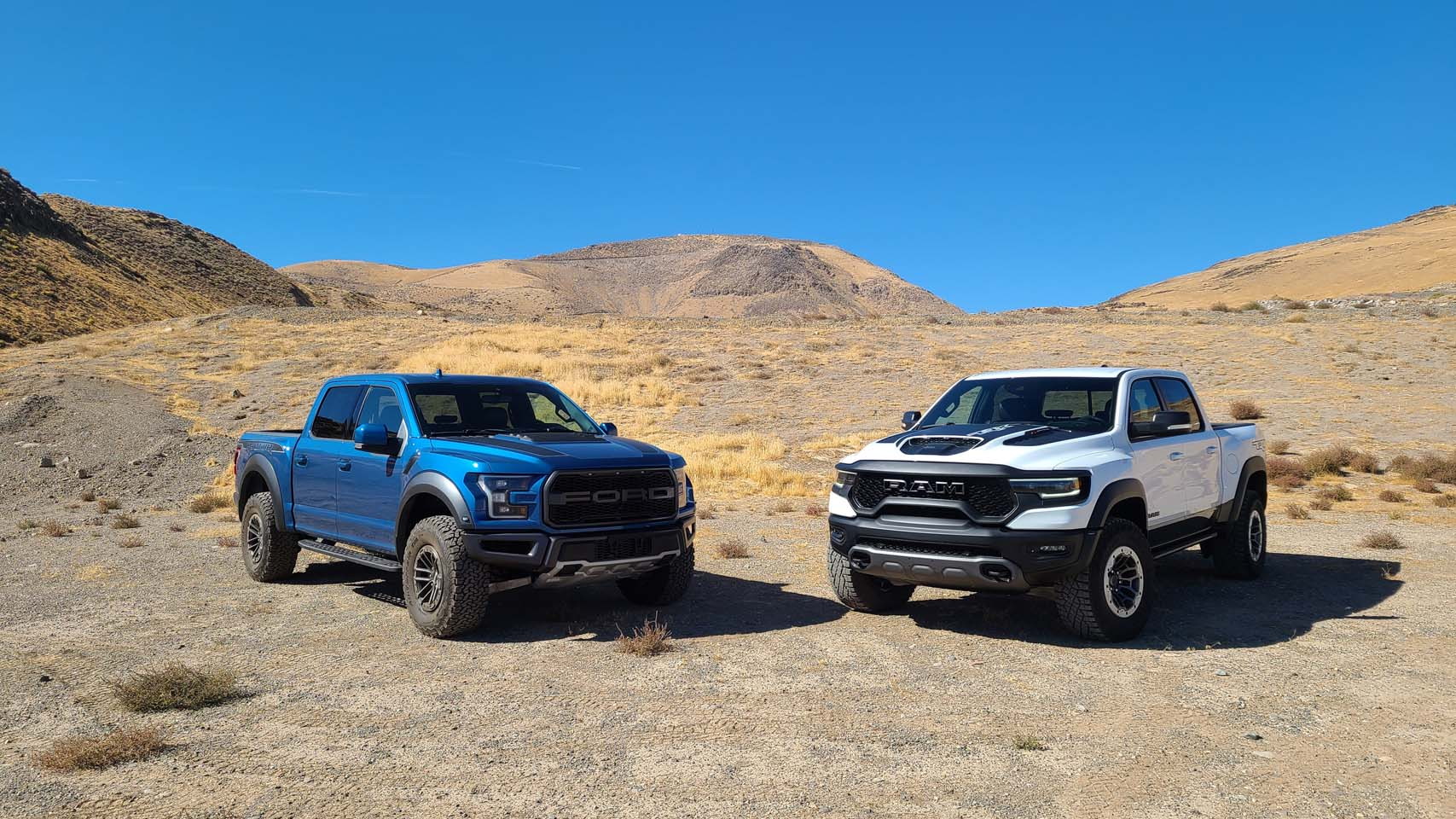 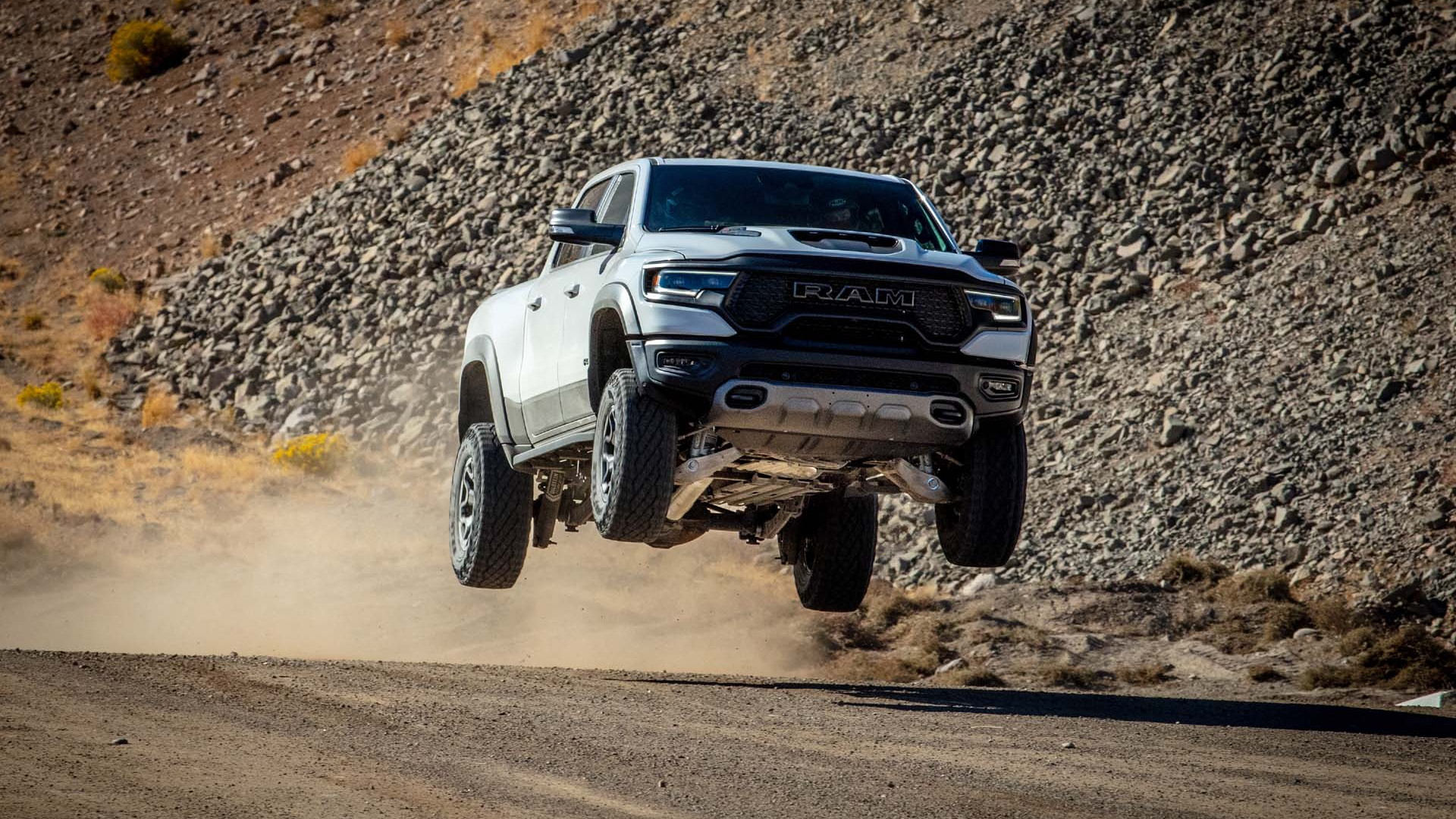 The Ford F-150 Raptor has stood alone atop the off-road food chain since it debuted in 2010. The Raptor was built to traverse harsh off-road terrain and do it quickly, with the soul of a Baja 1000 competitor. No other half-ton truck has tapped into the formula of power plus off-road capability until now.

A new challenger has finally arrived, one that describes itself as the “apex predator of the truck world” and has a dinosaur-inspired name of its own. The 2021 Ram 1500 TRX (Ram does not shy away from the T-Rex association) seems to have the goods under the hood and enough off-road DNA to make a real run at the Raptor’s crown.

This is the epic “Jurassic Park” dinosaur fight we’ve been waiting for and thankfully it comes without the risk of being eaten. It’s time to see if the TRX’s new “apex predator” claim holds water, or if the Raptor is still the lizard king.

(For the purposes of this comparison, we’ll be using the SuperCrew version of the Raptor. The Raptor is offered with the smaller SuperCab, but the TRX only comes in a Crew Cab configuration.)

The 702-horsepower TRX enjoys a big power advantage. Even though the TRX weighs about 650 pounds more, it has so much power that its power-to-weight ratio of 9.05 pounds per hp still significantly trounces the Raptor’s 12.66 pounds per hp.

The TRX’s spitting, rumbling, supercharged V-8 makes it quicker than the Raptor, which is no slouch in the acceleration department with a 0-60 mph time of 5.1 seconds of its own, according to Car and Driver. But the TRX’s 4.5 second 0-60 mph time is untouchable by production truck standards and its raucous V-8 provides more snap off the line. It even comes with launch control (that also works on gravel), two words I never thought I’d hear associated with a truck, let alone an off-roader. The TRX’s top speed of 118 mph also bests the Raptor’s 112 mph, though that is purely down to tires since both trucks have enough power to beat those marks easily.

It’s worth noting that the Raptor can run in more-efficient two-wheel drive, while the TRX is always running in 4WD. This difference teams with the Raptor’s lighter weight and smaller engine to give it a fuel economy advantage, though both of these trucks drink a lot of gas. The 2020 Raptor gets an estimated 16 mpg combined and the TRX just 12 mpg combined.

These are both rather large trucks, and the Raptor is far wider, while the TRX sits slightly taller. Both are only available with roughly 5.5-foot beds and are within an inch of each other in length. The TRX is 2.4-inches taller than the Raptor overall, though it only has a 0.3-inch advantage in ground clearance with most of that height gap coming from the cab. However, the load-in height of the bed is 1.7-inches higher which makes loading cargo more difficult.

The Ram 1500 has been redesigned more recently than the F-150 and it shows. The TRX’s cabin, besides offering better materials, a larger screen, and a superior multimedia experience, feels larger, especially in the back seat. The TRX is simply more luxurious, while the Raptor is ready for a makeover (which is coming soon).

Once again, the similarities between the trucks are striking. Both feature adaptive dampers, the same 4Lo crawl ratio, and similar clearances underneath. The biggest philosophical difference is the rear suspension where the Raptor has leaf springs and the TRX features coil springs (fun fact: these are the largest springs ever offered on a non-commercial production vehicle). Even with that point of differentiation, the two trucks offer nearly identical amounts of suspension travel front and rear.

Lower speed off-road maneuvers feel similar given these congruences, though the Raptor is slightly easier to see out of since its hood bulge is smaller. Power delivery is easy to control in each, and they easily climb over rocks and other obstacles with aired-down tires.

Higher-speed off-roading on dirt roads and over washes reveals some daylight between the Raptor and TRX. Both rigs absolutely eat up dirt and gravel, but do so in different ways that are true to their dino spirit animals. The Raptor’s weight advantage makes it the more nimble of the two, dancing over dirt with greater control and dexterity. The larger TRX leans more on its raw power. Its wheels feel like they’re sitting 6 inches deep at times, but with that engine the truck will churn through anything. I used the throttle to help steer the TRX more than I did in the Ford at the TRX media drive last month. The Raptor opens doors; the TRX rams right through them.

The TRX’s more-pliant suspension absorbs hard hits with shrugging indifference, but the trade-off is feel. Driving the TRX reminded me of playing with an oversized tennis racket: tons of power and more forgiveness when you end up slightly off center, but you lose touch. If precision is your priority, the Raptor will still hold more appeal. But if it’s raw power, the TRX loudly makes its case.

*We are still waiting for the redesigned 2021 Ford F-150 to arrive (and a new Raptor along with it) so the price above is for the 2020 version of the Raptor, of which there is still some inventory available.

The price difference between the two trucks is significant, with a $13,000 gap between their starting MSRPs. The counterargument from Ram’s product spokespeople was that the average transaction price of a Raptor is not near its base price. But the easy counter-counterargument is that the same thing will be true of the TRX. My TRX test vehicle cost $89,960 for example, and if I were buying a TRX that’s probably how I’d want to option it. Paying more than $70,000 for a cloth interior just feels wrong.

The TRX’s power advantage can’t be ignored. But that only manifests at the bleeding edge of what either truck can do, and neither truck will spend much time in 0-60 mph sprints or driving 100-plus mph off-road (unless you have a dragstrip or a dirt track in your backyard).

Without question, the TRX is the preferred choice for those who want the biggest and baddest truck. But the Raptor’s value (a weird word to use for such an expensive truck) makes it an alluring alternative. There’s really no wrong answer here. The TRX lays claim to the “apex predator” crown thanks to its power advantage, but many buyers will still prefer the Raptor’s driving feel at speed.

My hope is that Ford gets inspired to cram the 700-hp Shelby GT500’s supercharged 5.2-liter V-8 into the next-generation Raptor, creating what would amount to the Indominus Rex of off-road pickups. We all win if that’s the case, especially if Ford isn’t tempted to price the next Raptor alongside the TRX.