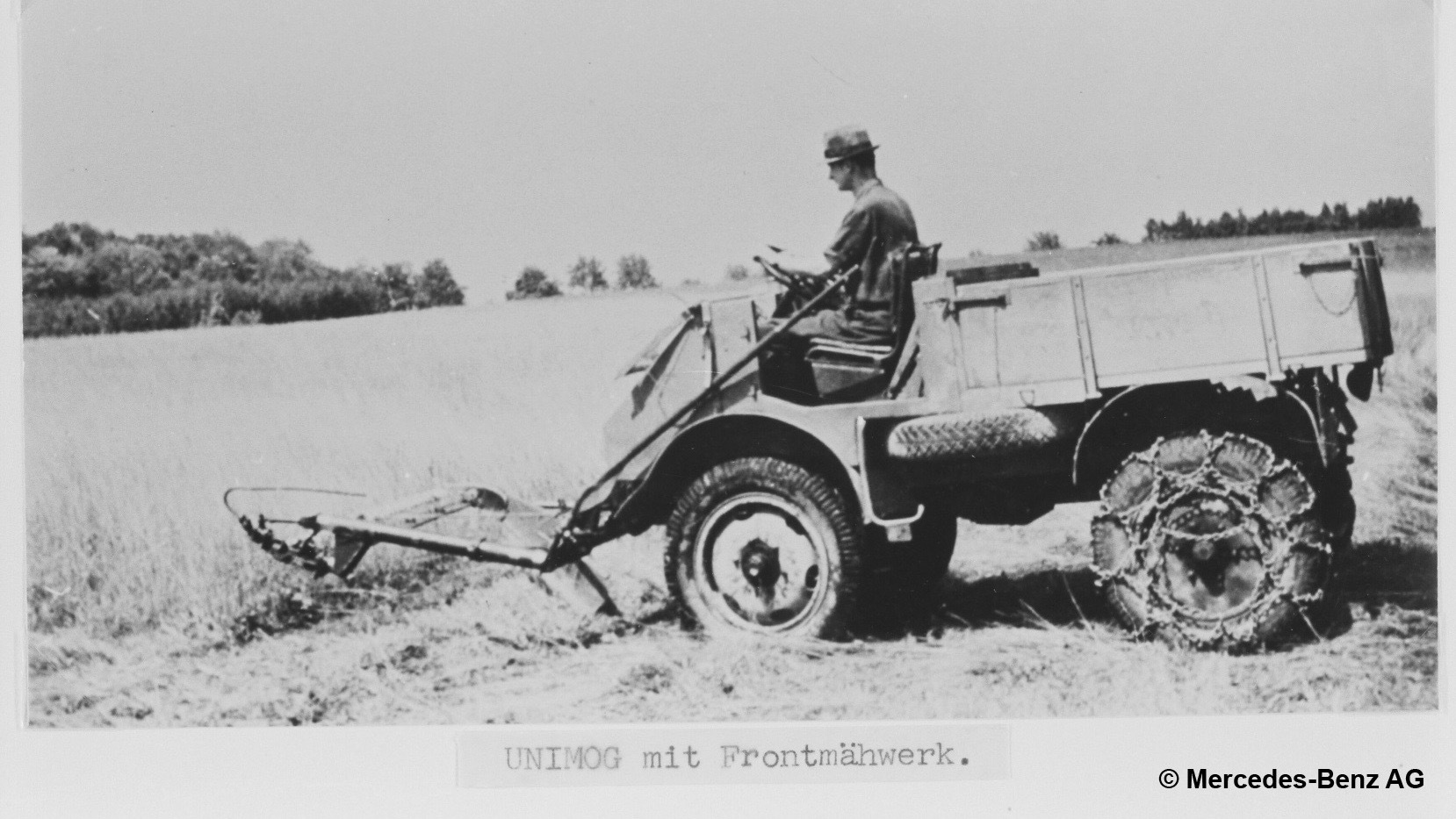 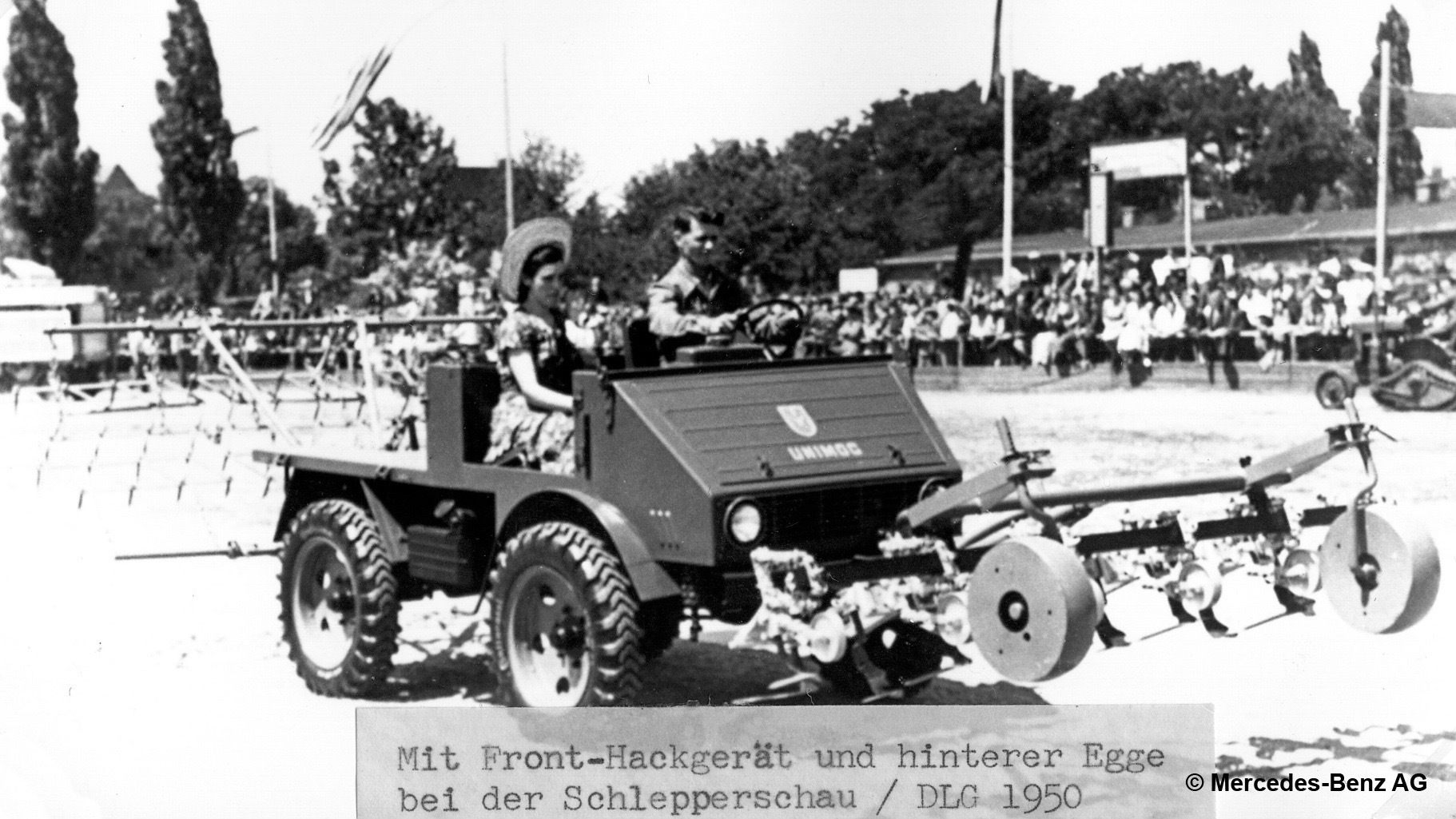 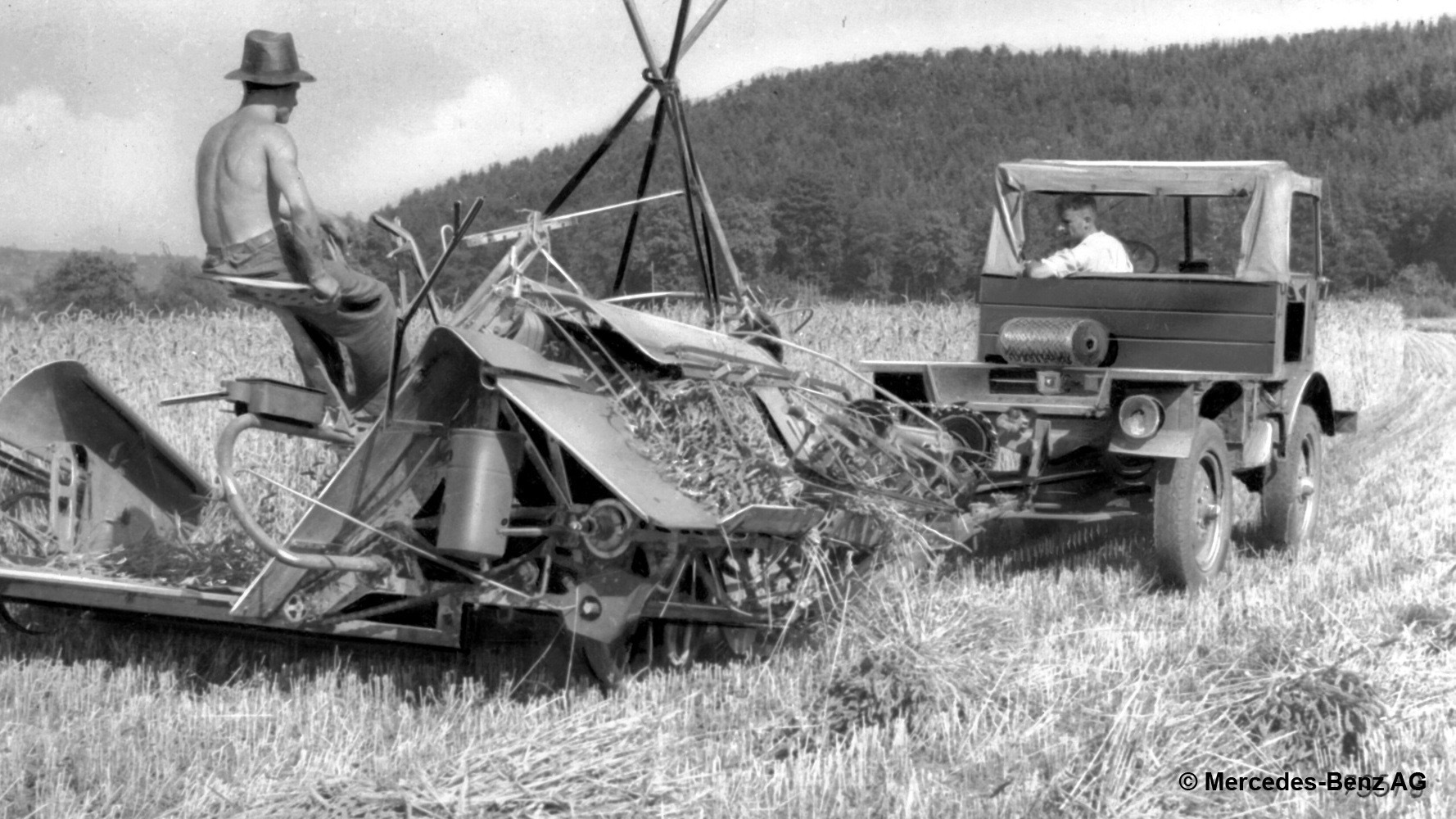 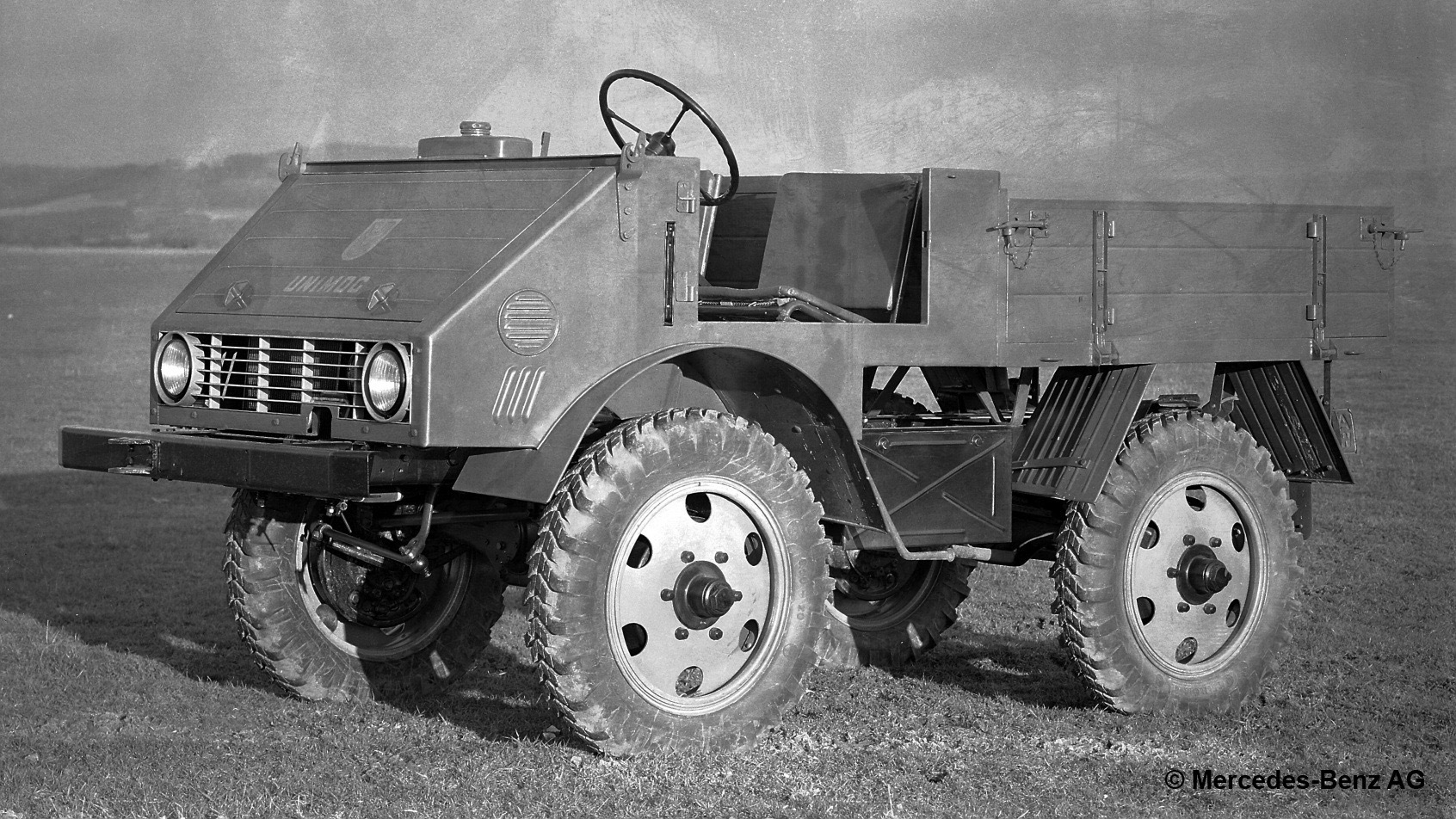 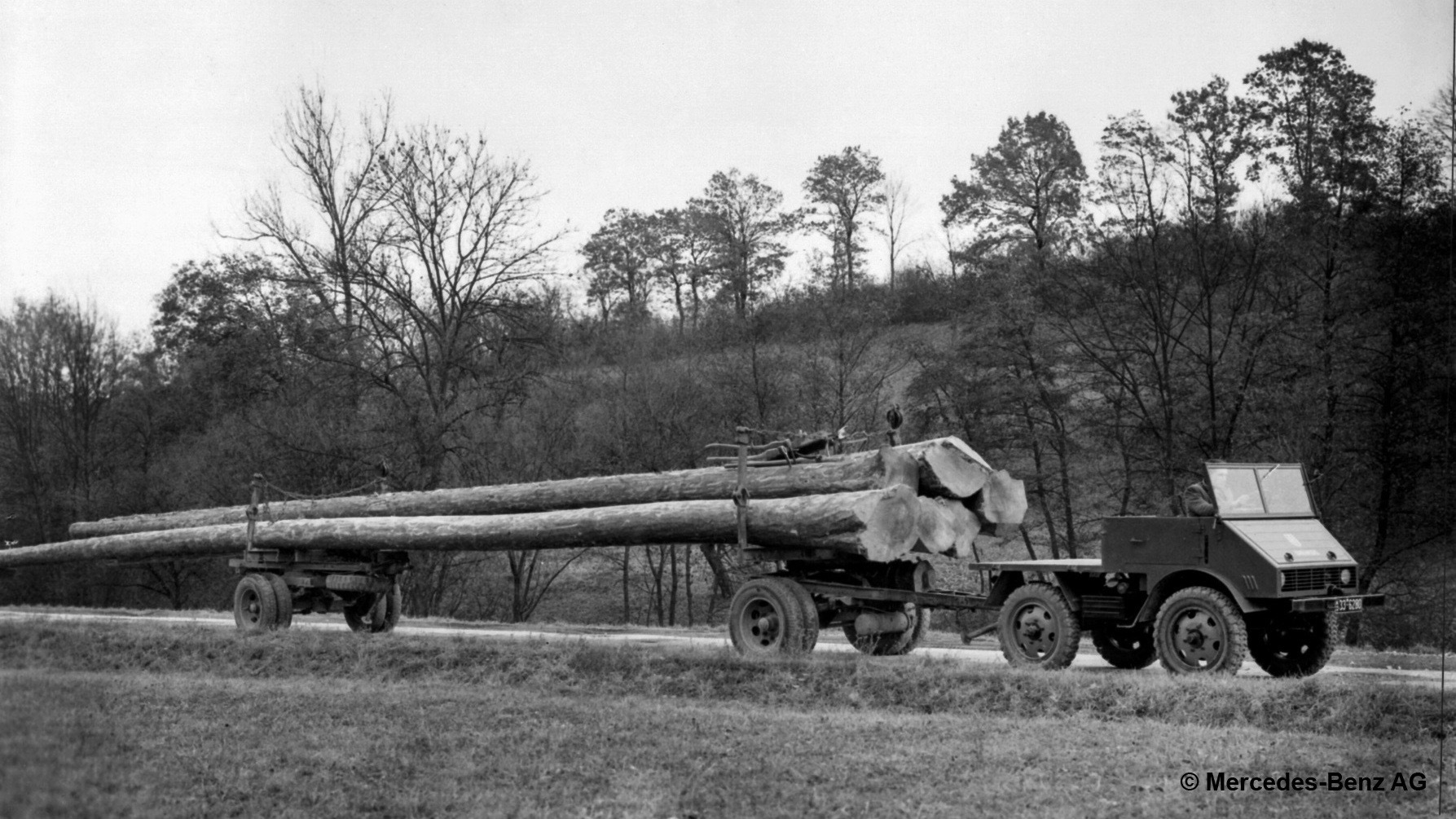 Many great automotive names have ties to agriculture. Lamborghini made tractors before it made supercars, and Porsche and Ford have dabbled in farm equipment over the years. That's also the case with the Unimog. The versatile work vehicle sold by Mercedes-Benz was originally supposed to be a tractor.

The Unimog was born in 1945, amid the devastation of postwar Germany. The vehicle was designed by Albert Friedrich, a former head of aircraft-engine design at Daimler-Benz. Friedrich's original drawings were of an "engine-powered universally applicable machine for agriculture," a description that is still partially referenced in the Unimog name, but more on this later.

That original plan called for four-wheel drive, four equal-sized wheels, and 25 horsepower. The vehicle was also designed with a track width of 1,270 millimeters—the same as two rows of potatoes, according to Mercedes.

But the Unimog was designed to be at home on roads as well as in fields. The design called for a high enough top speed for use on public roads, as well as coil springs for a smoother ride. Tool attachment points and power-takeoffs (which allow the engine to drive accessories) further increased versatility.

A prototype was completed in 1946, and given the name "Universal-Motor-Gerät," or "universally applicable motorized machine." That was eventually shortened to Unimog, but first Friedrich and his business partners needed to get the machine into production.

Friedrich had secured permission from the United States occupying forces to go ahead with production (a necessary step in the immediate postwar period), but was turned down by his old bosses at Daimler-Benz. Instead, machine-toll manufacturer Boehringer built the first Unimogs, with large-scale production starting in August 1948.

Boehringer produced about 600 Unimogs through summer 1950, but couldn't keep up with demand. Convinced by the vehicle's early sales success, Daimler took over Unimog production later that year. The Unimog has worn Mercedes' three-pointed star ever since.

Since then, the Unimog has evolved through several generations, keeping the same basic template of a compact four-wheel drive chassis, and the ability to be fitted with an endless array of tools and accessories for different jobs. The current-generation Unimog can be fitted with everything from snowblowers to lawnmowers, and is capable of driving on rails as well as dirt and pavement. Earlier this year, a Unimog set a new altitude record, climbing to 21,961.94 feet up the Ojos de Salado volcano in Chile.