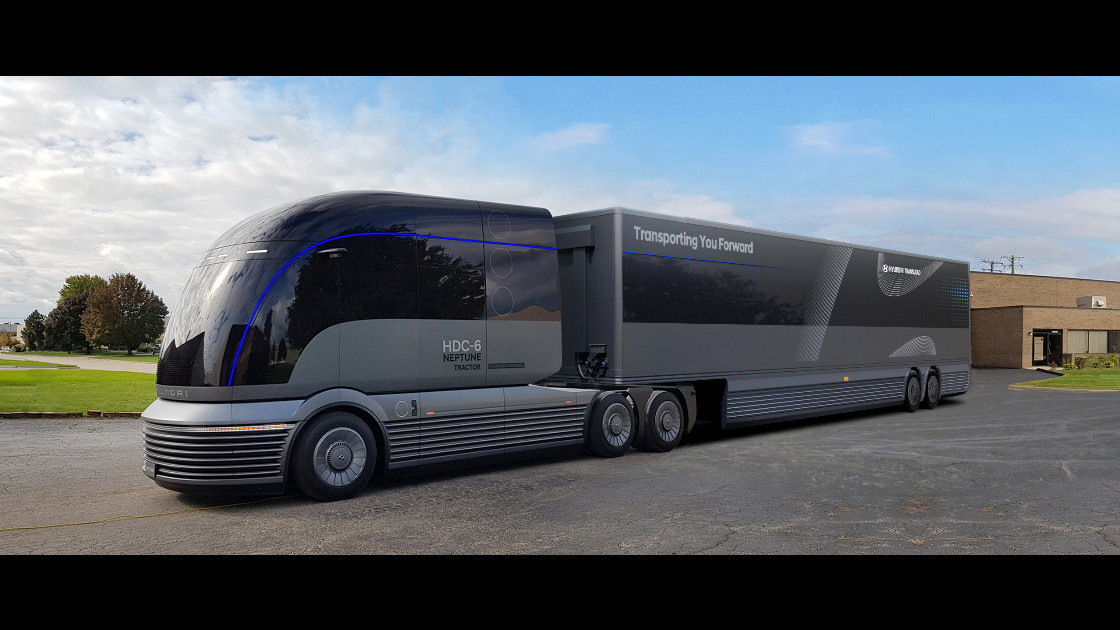 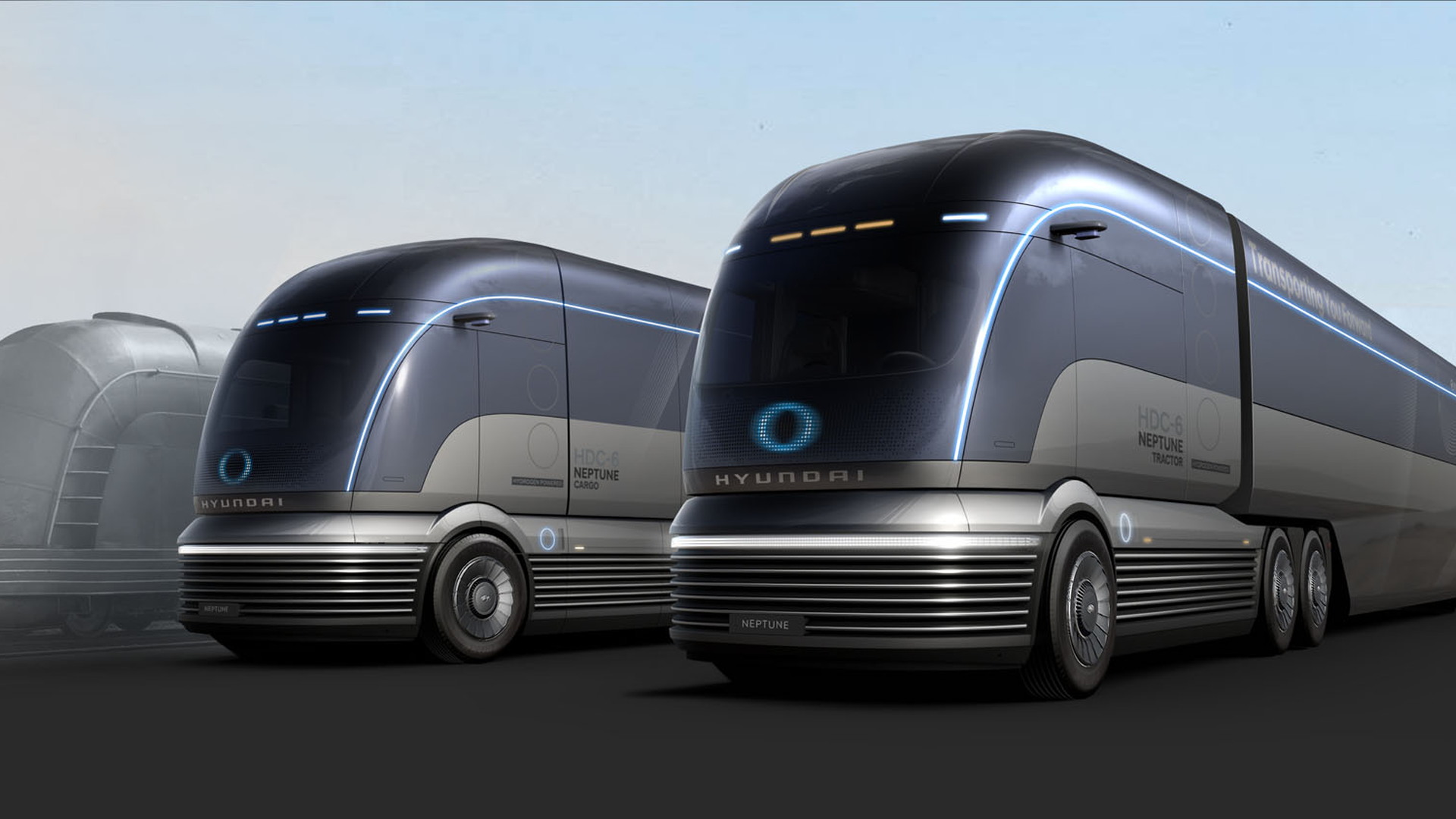 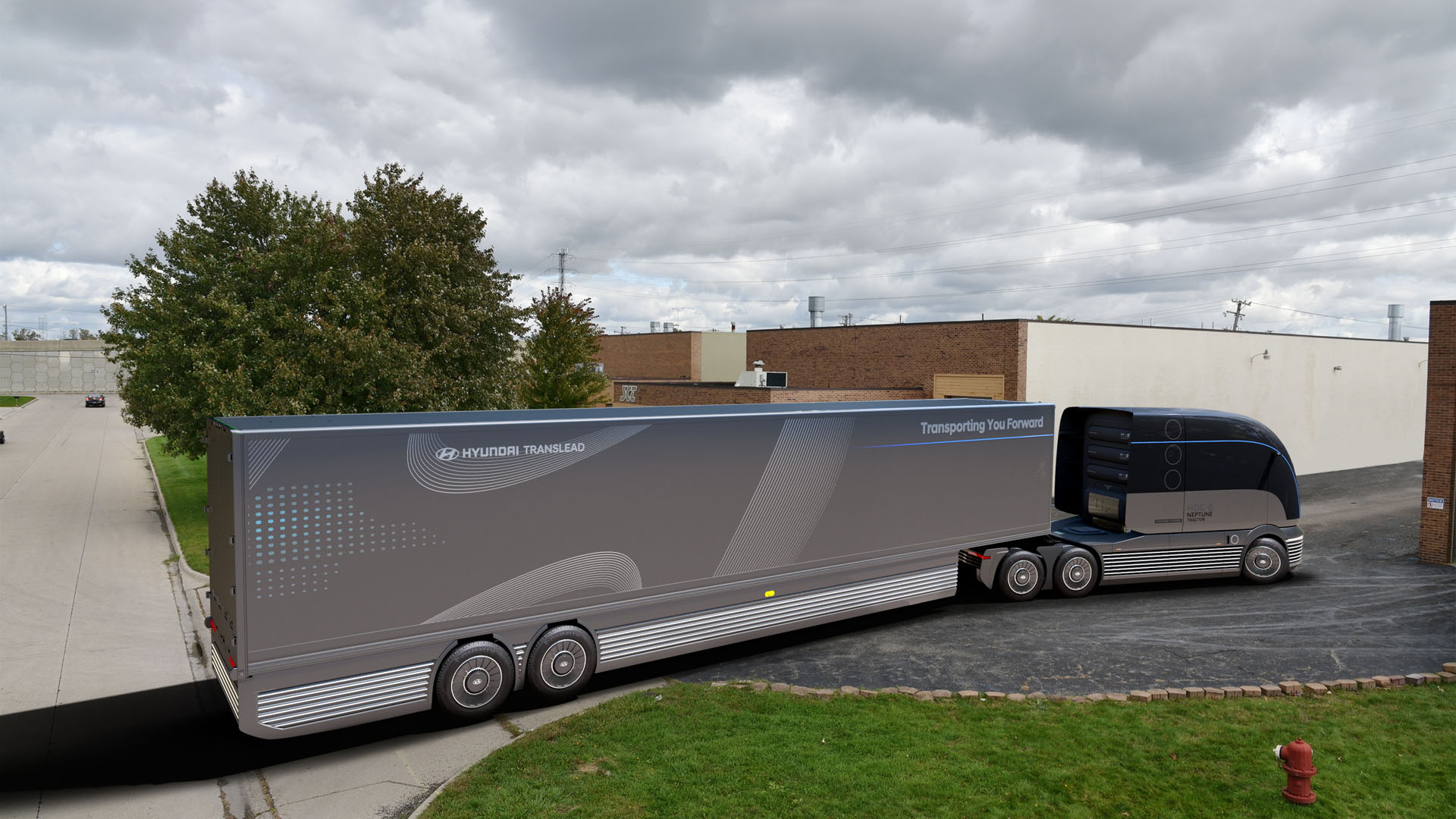 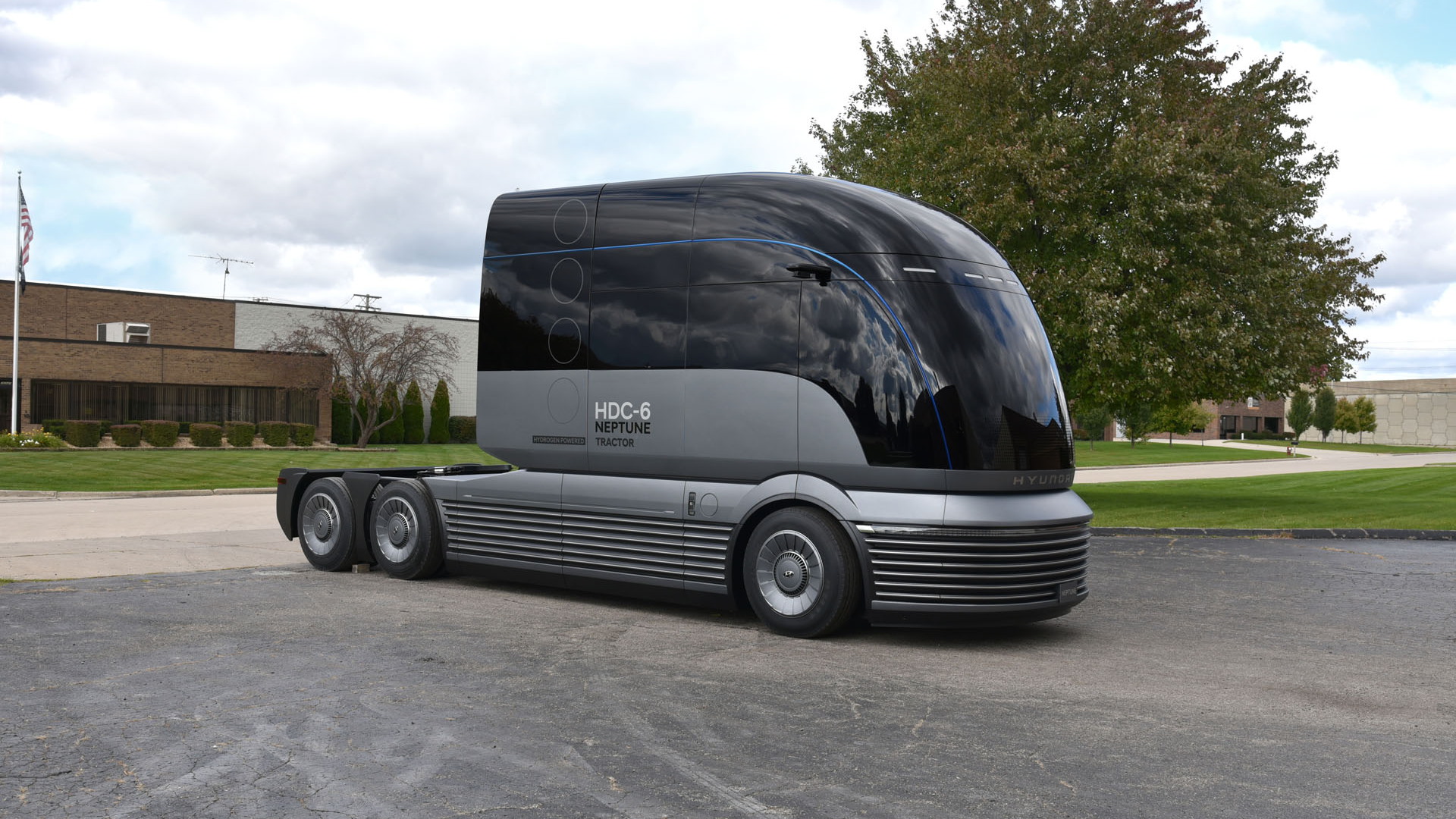 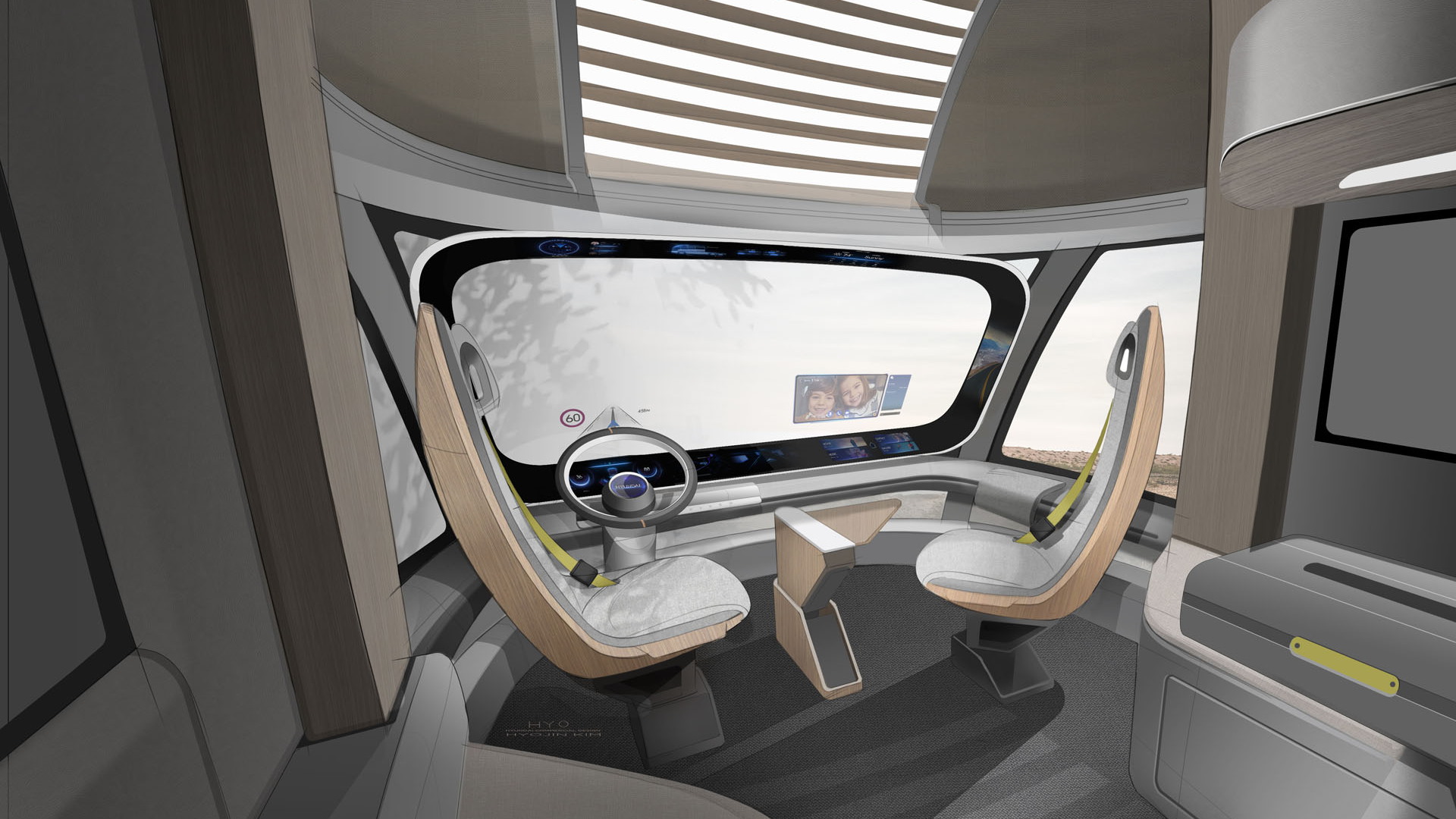 Hyundai's designers have taken a stab at what they believe to be the future of long-haul trucking with the wild HDC-6 NEPTUNE Concept Class 8 fuel-cell-electric truck (FCEV) concept shown at this week's North American Commercial Vehicle (NACV) Show.

The company's stylists took their inspiration from the streamliner locomotives of the prewar era, aiming squarely at the Art Deco industrial design look that was once thought to be the future of design. Judging by Hyundai's effort here, there's hope yet that it will be. Hyundai says the look is also a combination of traditional cab-over and bonnet-style trucks.

The design also features maximum cooling in the lower grille, and that style is carried along the sides of the truck and incorporates hidden cab steps. Inside, Hyundai only claimed the truck would embody "lifestyle-oriented mobility."

"Hyundai has the necessary processes and experience to develop the quality vehicles that support its FCEV 2030 vision for a hydrogen ecosystem," the company said in its announcement. "For commercial vehicles, fuel cells are the perfect fit for heavy duty trucks and long driving distances due to higher drive range, higher payload, less refueling time, and ultimately lower costs."

That's not just hopeful conjecture, because while ICE-powered long-haul commercial trucks are still vastly cheaper to own and operate than their alternative-fuel competitors, hydrogen is the alternative with the best chance of reaching cost parity with diesel-powered long-haul trucks over the next two decades—years sooner than battery-electric alternatives.

While Hyundai provided next to no details regarding its concept's fuel-cell powertrain, one of its development partners also showed a fuel-cell-powered Class 8 truck at NACV. Enter Cummins—perhaps the last company anybody would expect to developing a competitor for diesel power.

The Cummins powertrain is based on a proton exchange membrane fuel cell from Hydrogenics (a company Cummins recently acquired). The concept has a 90-kw fuel cell, Cummins says there's plenty of room to scale that up in 30- or 45-kw increments, to a maximum of 180 kw.

With its standard 100-kwh lithium-ion battery pack, Cummins says its truck has a range of 150-250 miles between fill-ups, and notes that this range can be extended by adding hydrogen tanks, by increasing the hydrogen storage pressure, or by installing additional fuel cells.

A 250-mile range puts this FCV in the running with the current generation of electric semi-truck prototypes, and while that's only half the range claimed by Tesla, FCVs can replenish with a simple fill-up—provided the U.S. government sticks to plans that would help bolster America's non-existent hydrogen infrastructure.

Hyundai is also part of a joint venture with H2 energy to develop a fleet of fuel-cell trucks. The two will build 1,600 fuel-cell-powered semis for the Swiss commercial vehicle market between 2019 and 2023, and Hyundai says the U.S. market is an important next step.

The design of the HDC-6 NEPTUNE Concept might be a pipe dream for the moment, but hydrogen isn't completely out of the running when it comes to freight applications. Here's hoping the final product ends up looking half this cool.