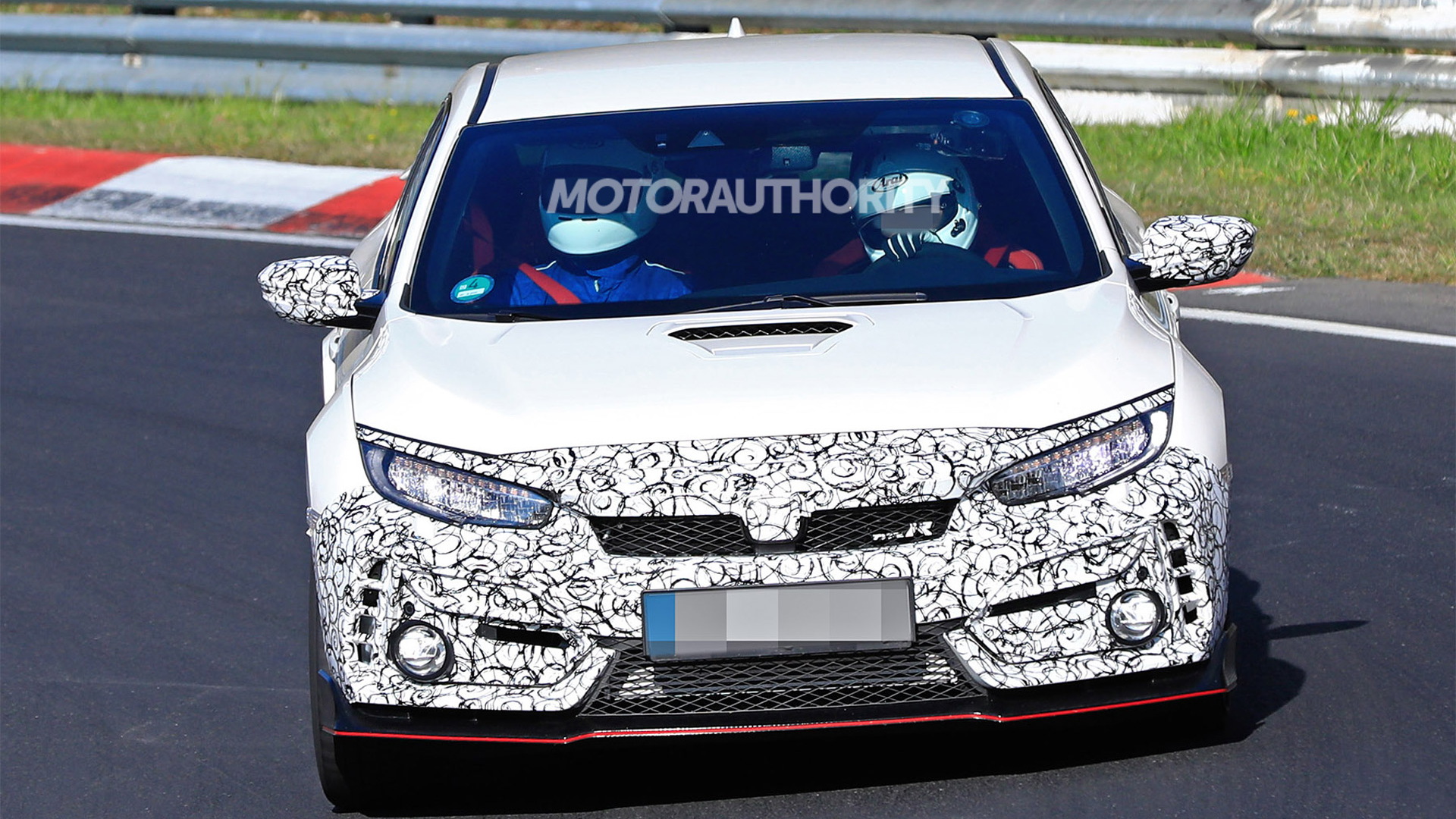 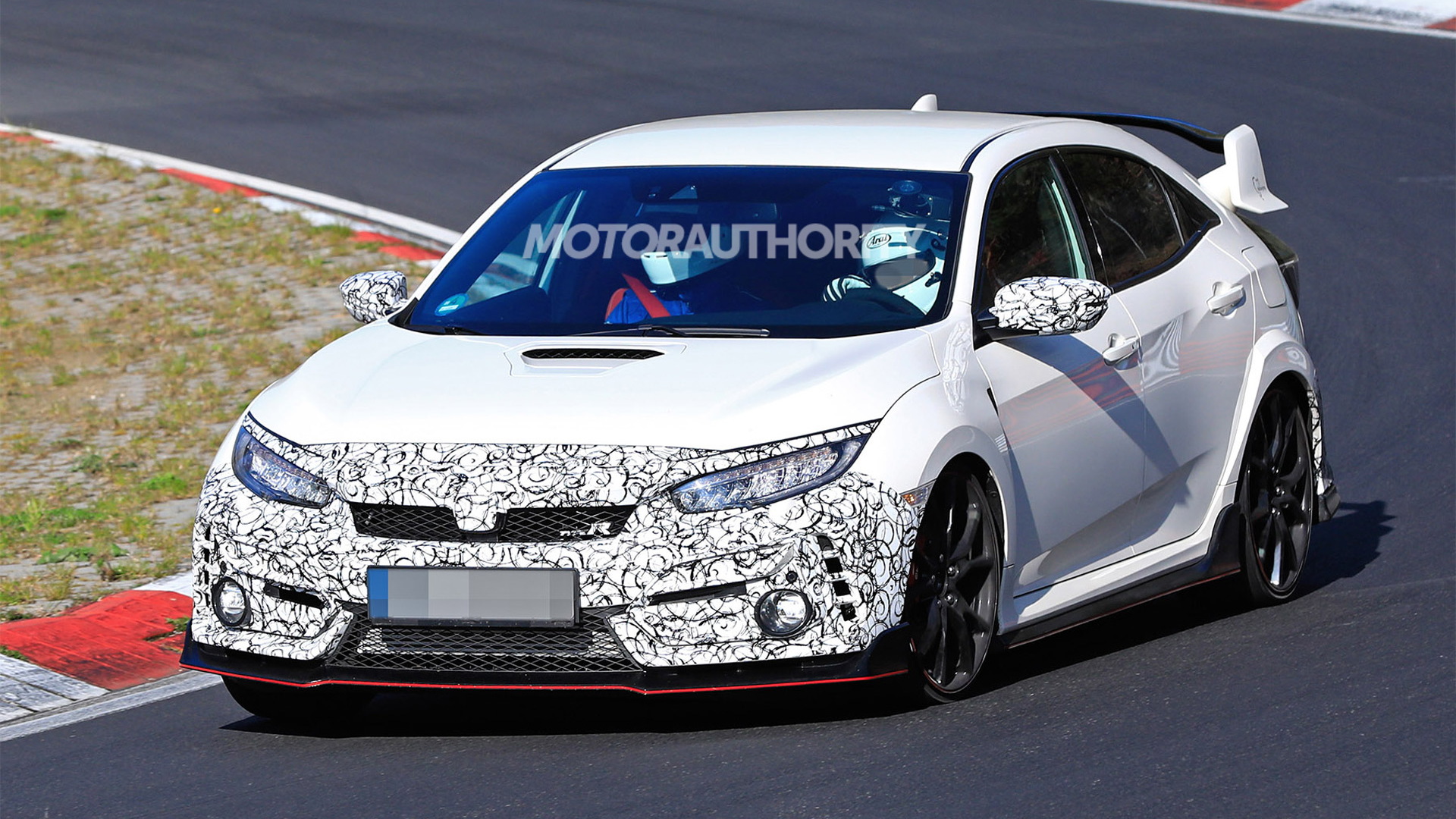 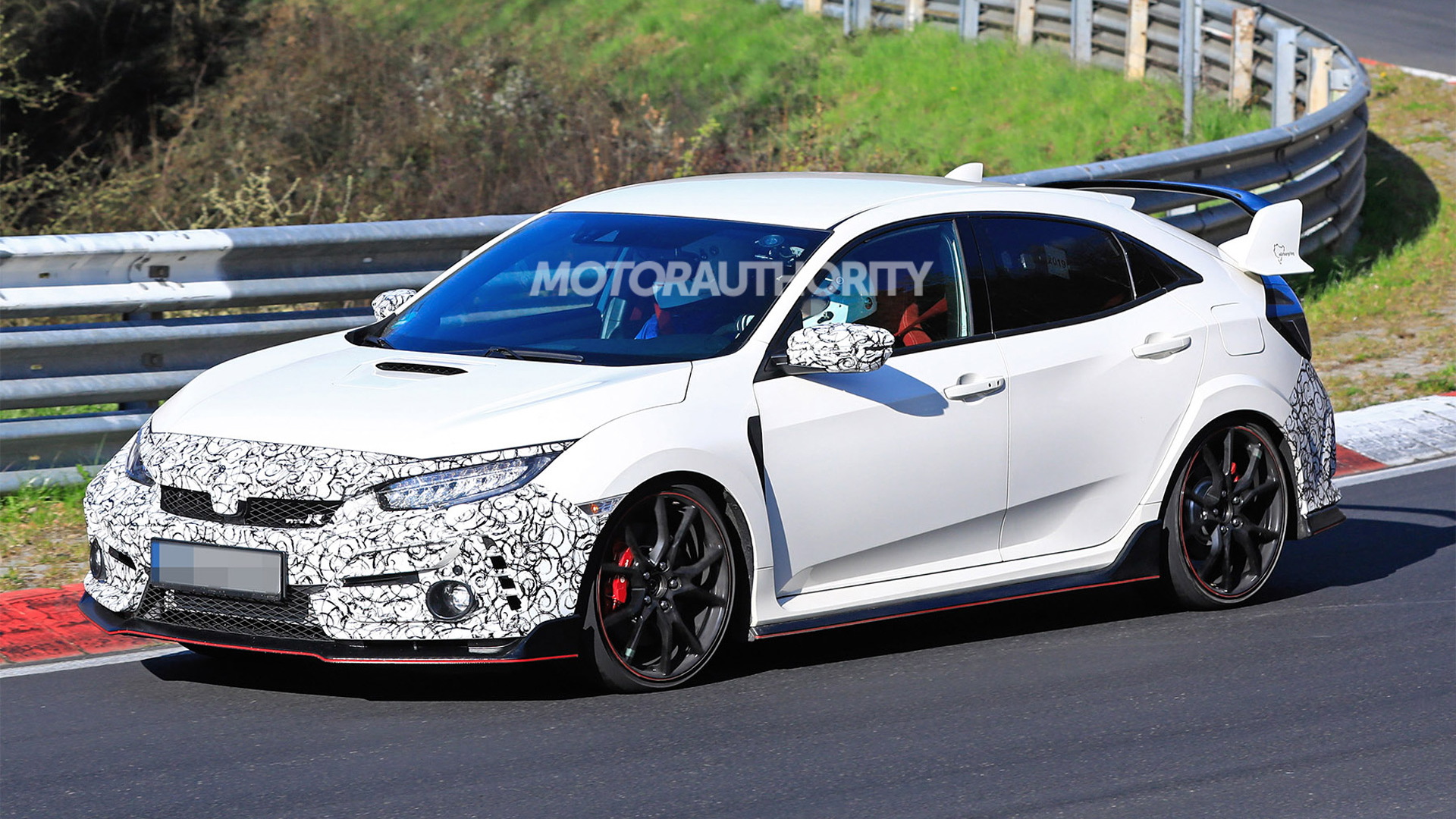 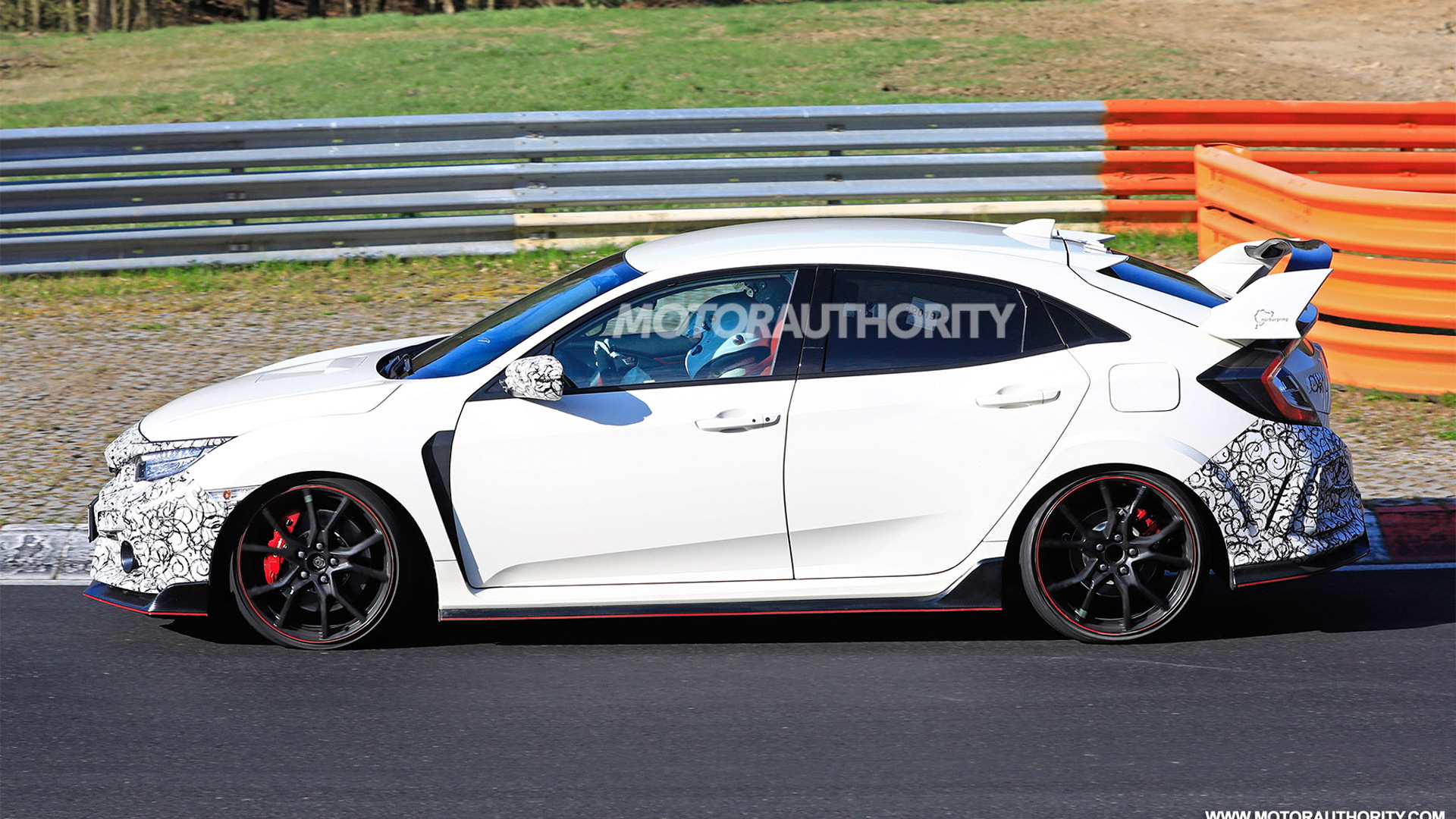 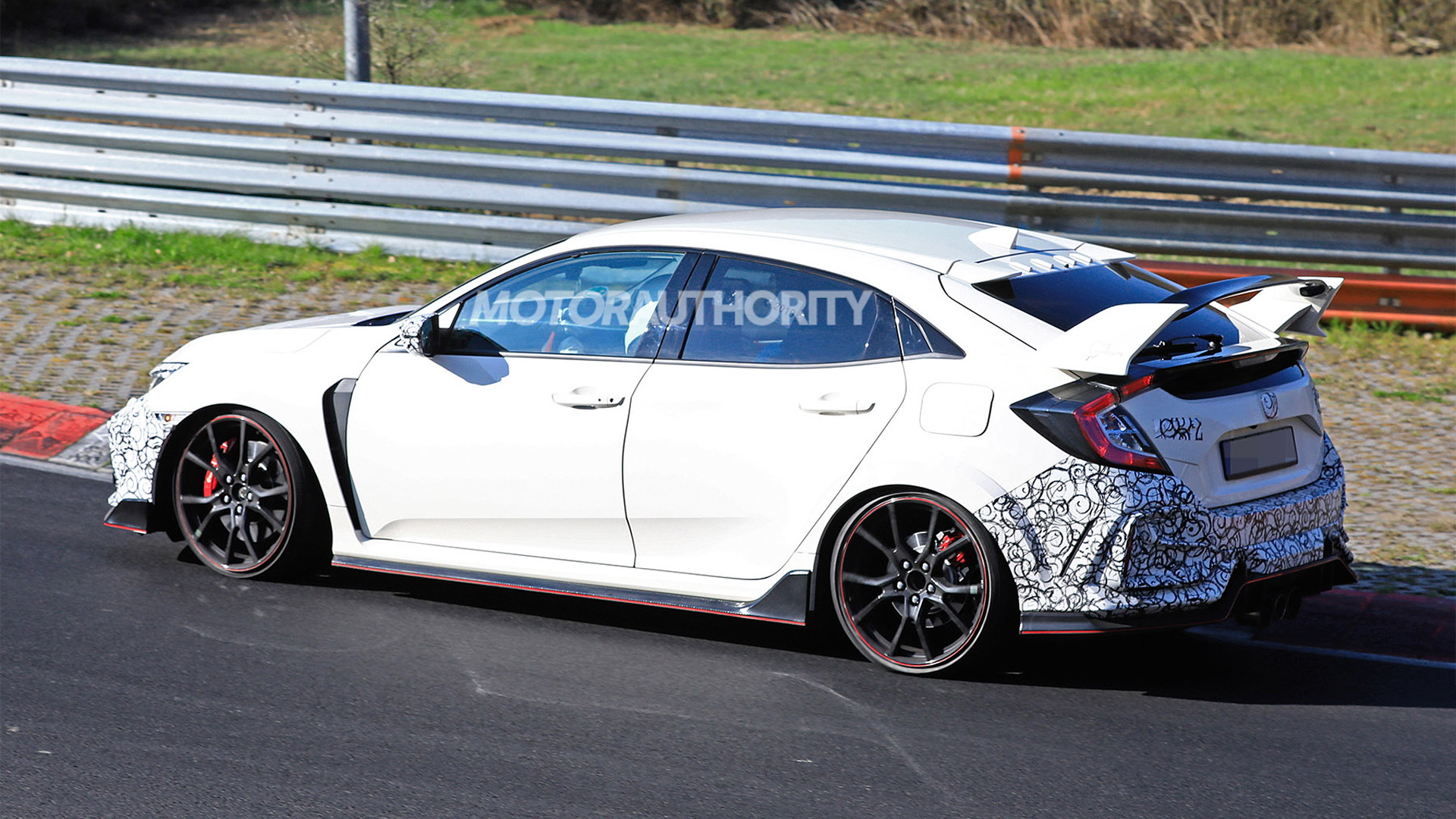 The current-generation Honda Civic Type R only arrived for 2017 but an updated version is slated to arrive in the coming year, as evidenced by camouflaged prototypes spotted testing at the Nürburgring.

The only visible changes are the revised fascias front and rear. Each fascia appears to feature new flicks in front of the vents.

Extra camouflage gear on the hood intake and roof of the yellow prototype could be hiding exposed carbon fiber, suggesting that lightweight body panels will either be offered on the Type R or perhaps a new hardcore variant.

Recall, Hideki Matsumoto, chief engineer for the Civic line, said shortly after the Type R's launch that Honda was hopeful of adding more variants to keep sales volume stable over the product cycle. At the time, Matsumoto said Honda was looking at a more powerful version as well as a softer version designed for grand touring. A version with all-wheel drive to better challenge the Subaru WRX STI and Volkswagen Golf R was also a possibility, he revealed.

There have also been rumors of a tamer version with less power and a lower price tag, which is evidenced by an earlier prototype wearing a smaller rear wing.

Right now we expect the spied Type R to be introduced late this year as a 2020 model.

If you're looking for a fast car with a reasonable price tag, the Civic Type R is hard to beat. Despite its front-wheel-drive configuration, it manages to hold up well at the track and at the same time is comfortable and practical enough to drive every day. That's why we gave it the Motor Authority Best Car to Buy 2018 award.

The current 2019 Civic Type R is priced from $36,595 and powered by a 2.0-liter turbocharged inline-4 delivering 306 horsepower and 295 pound-feet of torque. It's only available with a 6-speed manual and the one trim level: Touring.

The car is sourced from a plant in the United Kingdom that is home to Civic hatchback production. The plant is to be closed in 2021, with future Civic hatchbacks bound for North America to be built locally. It means any future Type R will likely also be built on local soil.