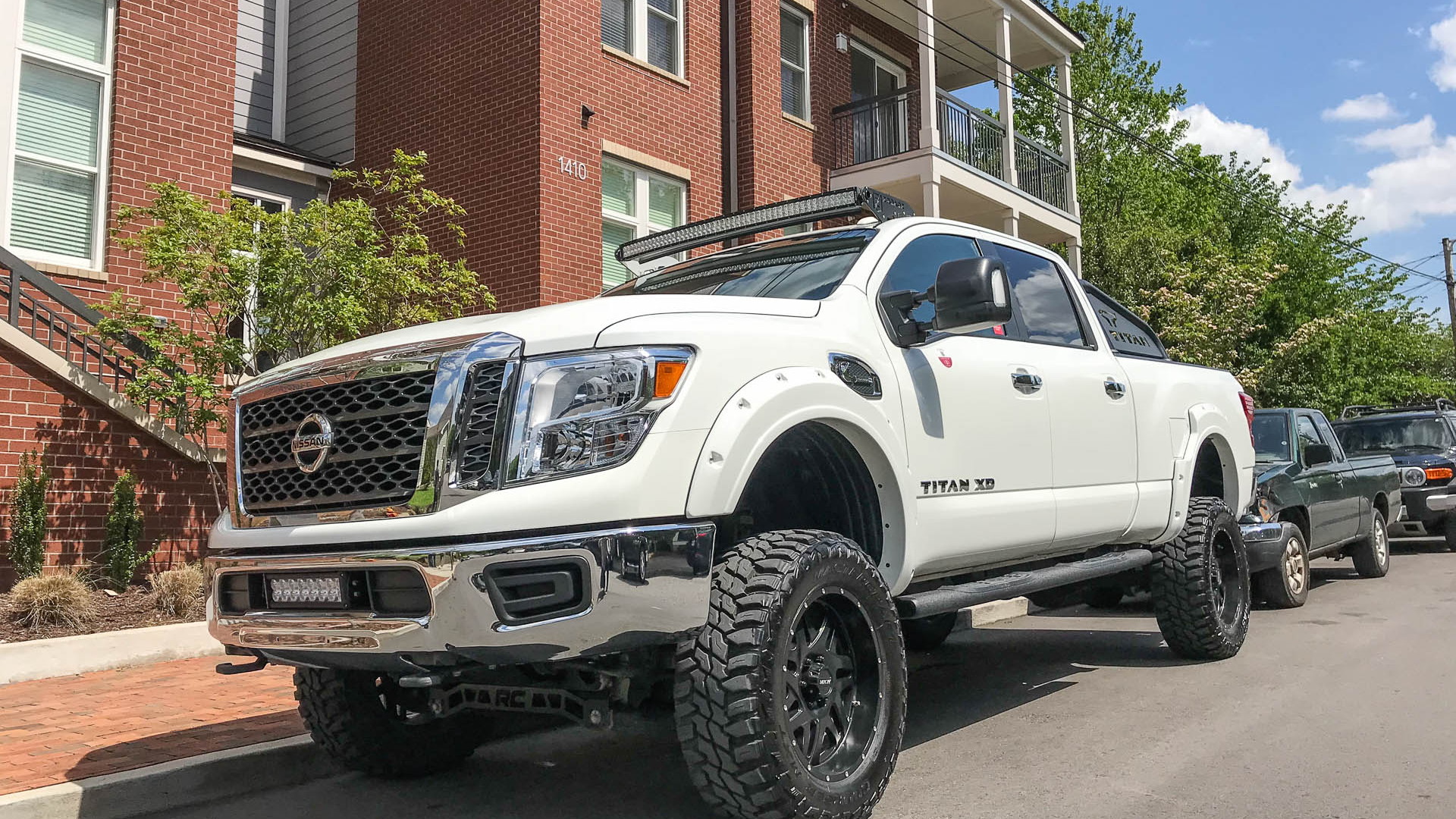 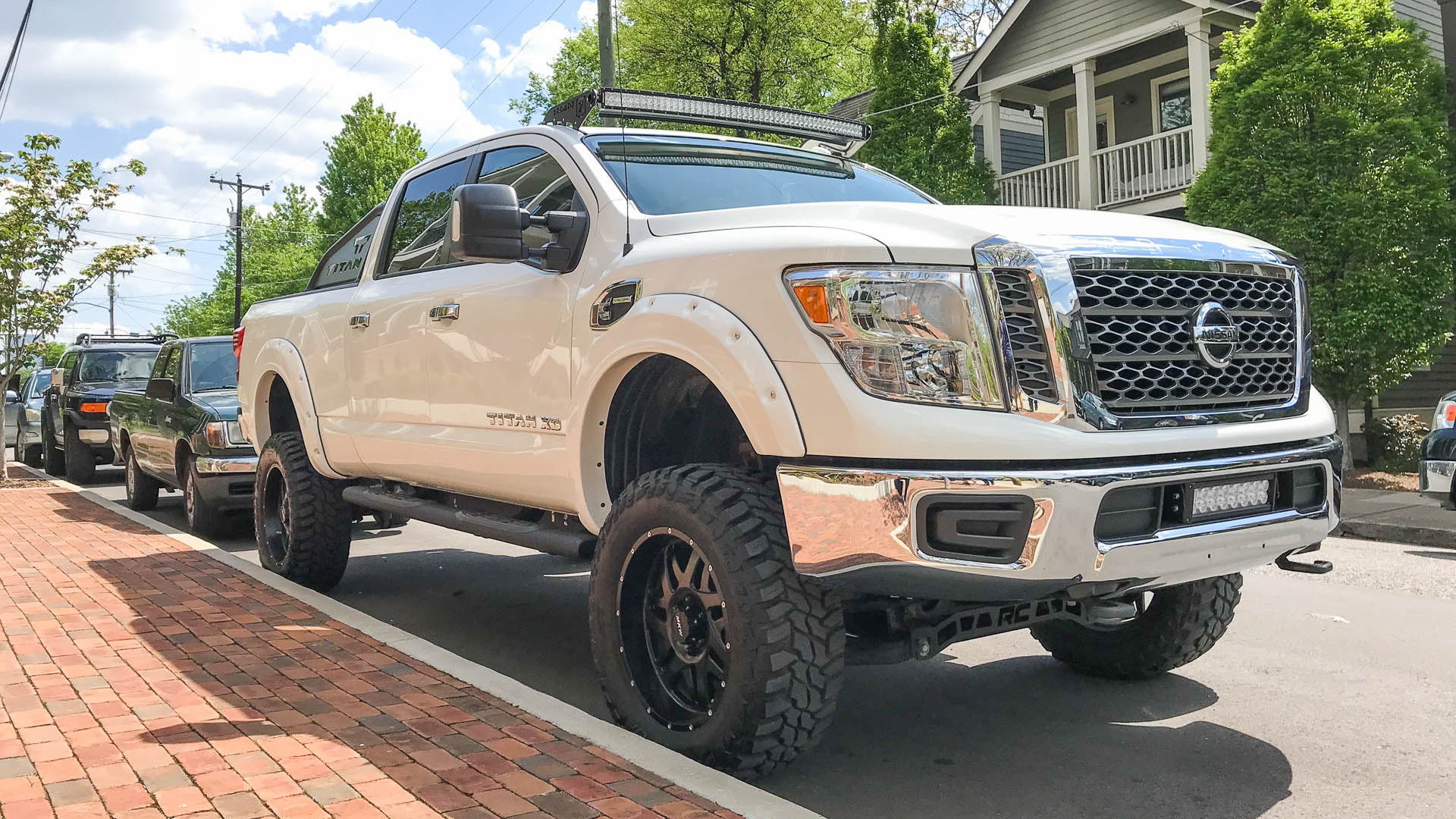 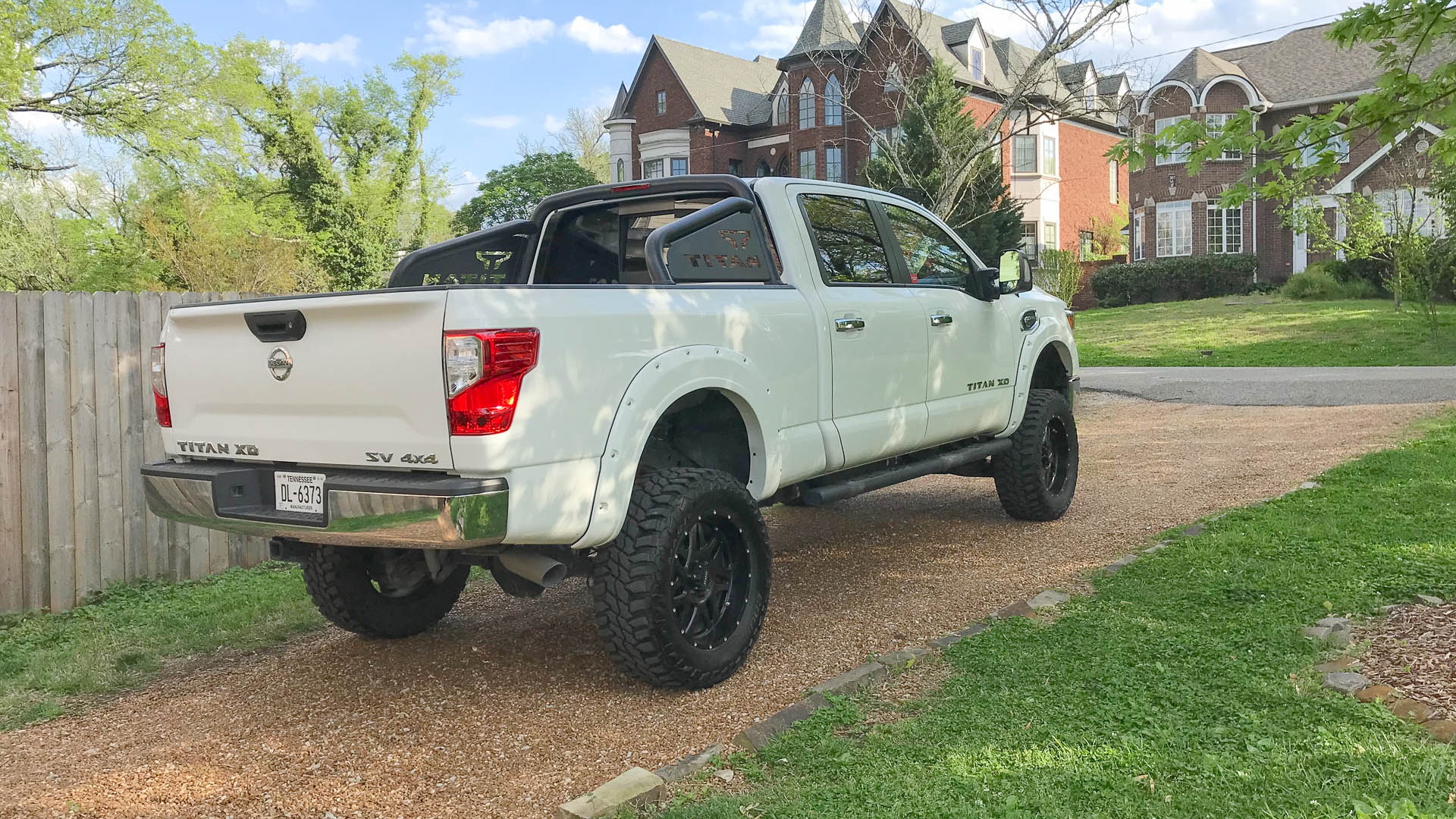 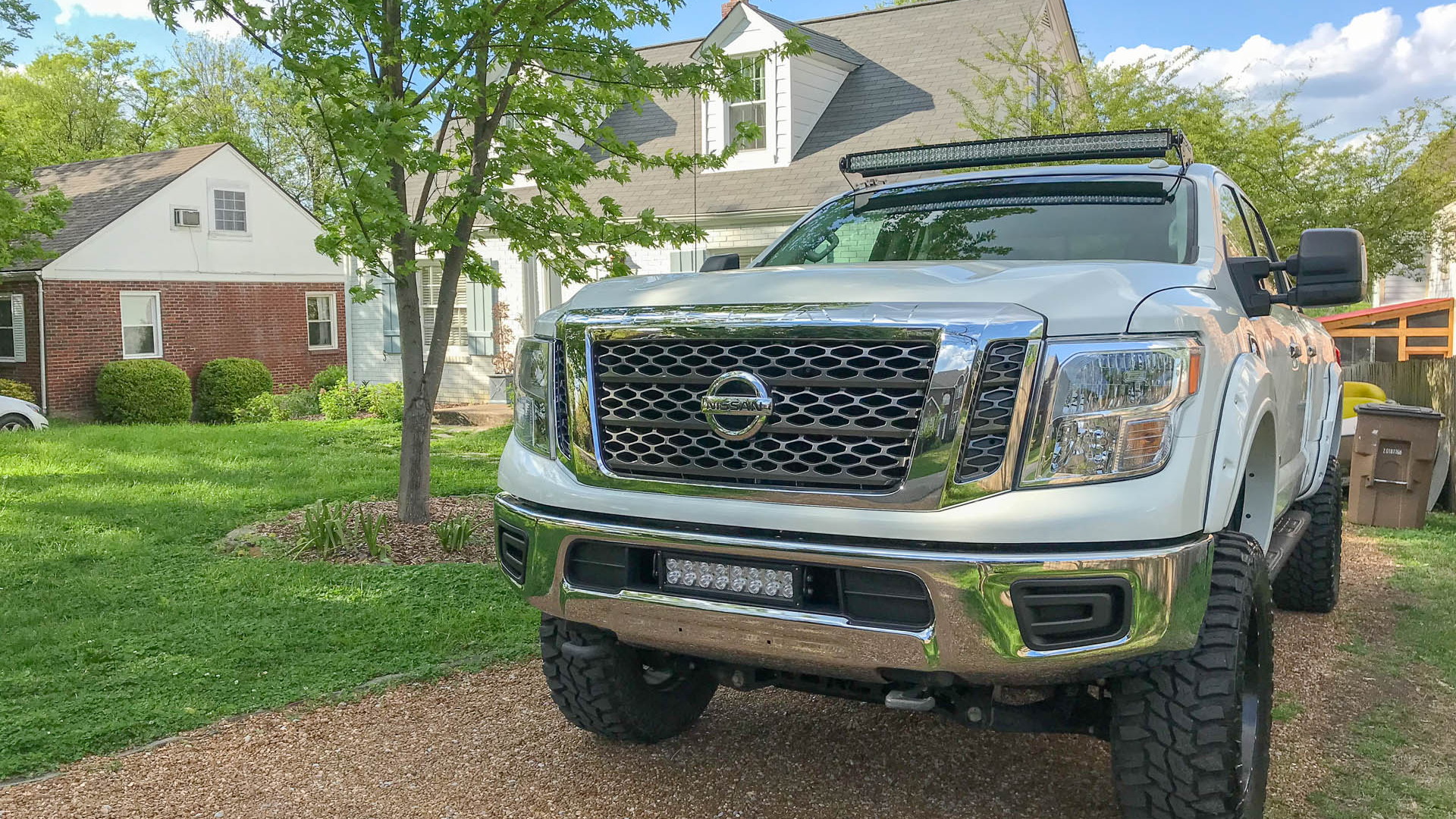 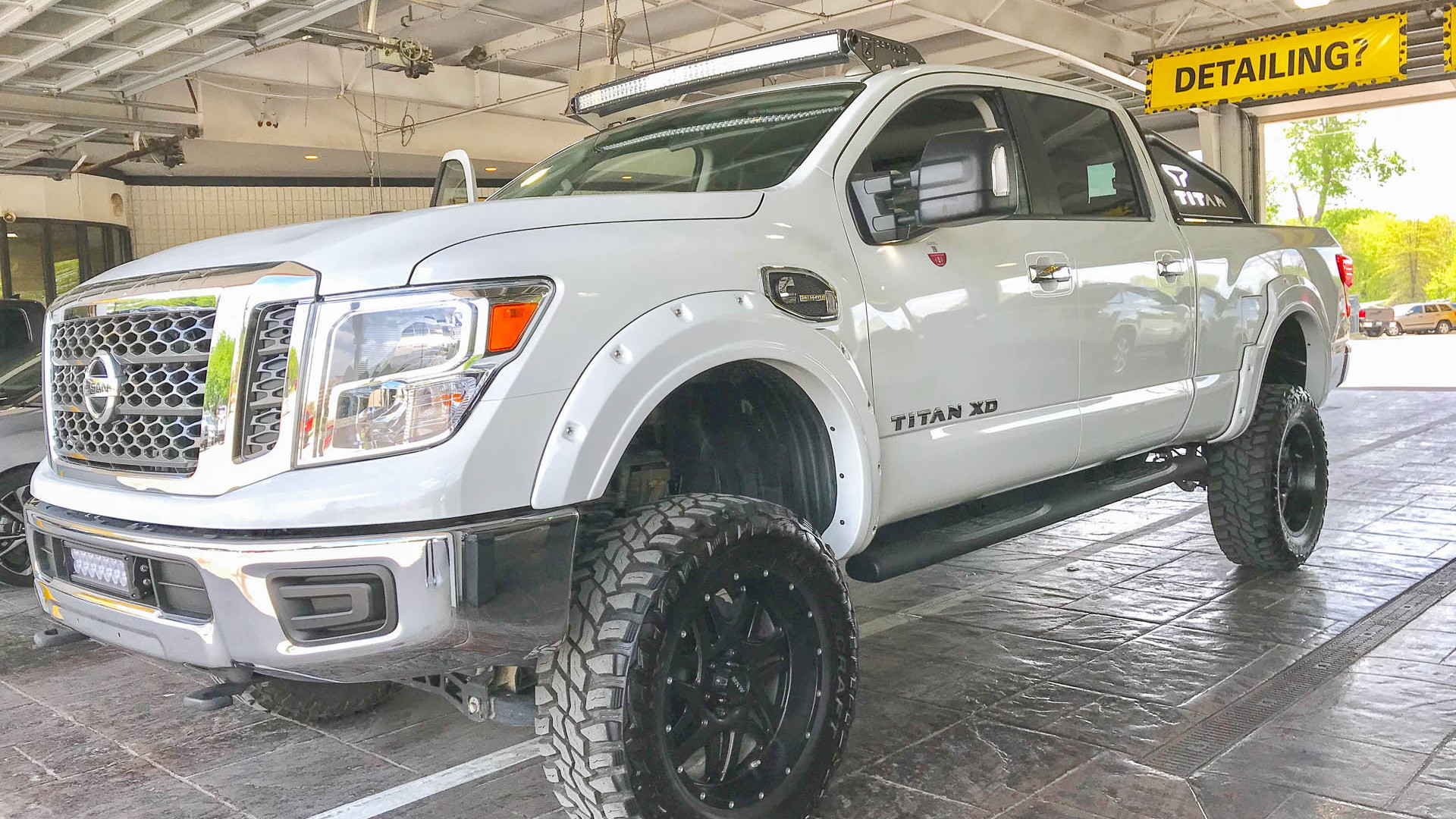 I had some ideas of what it would be like to drive before taking the keys, but after spending a weekend bombing around Nashville and the surrounding area in The Beast, it’s clear that driving a highly modified pickup truck is hard to imagine without experiencing it.

Here is some of what I learned:

With a 6-inch lift and 35-inch tires, The Beast is huge. It’s even bigger than you think, no matter how large you think it is.

Pictures don’t convey the sheer size of Nissan’s creation. The truck is 20.3 feet long, 6.7 feet wide, and 6.5 feet tall in stock form. Add on a 6-inch lift kit and 35-inch tires on 20-inch wheels, and it’s simply massive. Want an example? A 5-foot-2-inch person can actually stand under the side mirror and clear it. You won’t understand it unless you witness it in person.

Physics is a thing

When you lift an automobile up, moving the mass further into the air, the dynamics change. Spoiler alert: It doesn’t improve them. Ask any racer, and they’ll tell you that placing the mass as low as possible will improve handling and overall dynamics. Lifting the Titan XD did the opposite. The handling is sloppier, turns can’t be taken as quickly, and whatever road feel the vehicle had is now muddied.

Some good came out of it, as the 12.6-foot wheelbase combined with the meaty 35-inch off-road tires make for an extremely cushy ride. Wafting down the highway one could easily be convinced they are riding in an expensive luxury car based on the ride alone.

Park The Beast next to any ordinary light- or even heavy-duty pickup and the Glacier White Titan XD towers over it. In a lineup next to a Ford Super Duty and a Chevrolet Silverado HD, the Titan XD made the two Americans look like toys. Line The Beast up next to a stock Titan XD and the stock truck looks plain and boring. It’s not just one thing, it’s the combination of the increased height, massive off-road tires, fender flares, off-road lights, and Sports Bar. The fender flares alone change the attitude of the truck.

For most of my weekend with The Beast it seemed like I was king of the road. Looking down on Ford F-150s at stoplight and thinking, “that’s cute,” was a new experience, but it didn’t last. While cruising down the highway, a black speck in the rearview mirror seemed to be closing in fast. Within a minute, a Ford F-350 duallie with dual exhaust stacks, a large lift kit, and huge tires blew past as if I was standing still. The black F-350 was ginormous, and it was the first time The Beast seemed small as the F-350 sat even higher in the air. Like all situations in life, there’s always someone more powerful, stronger, and bigger than you.

We tend to stereotype folks who own and drive a modified pickup truck. Unfortunately, quite a few of those stereotypes have negative connotations. The Beast spent its weekend shuttling groomsmen and then chauffeuring a bride and groom away from their wedding. One can only imagine the looks it received when onlookers realized the cab of The Beast was full of adults in suits and dresses. Don’t always judge a book by its cover or a driver by their vehicle. But if you see truck nuts, go ahead and think that guy is an idiot.

Special thanks and photo credit to Brad+Jen photography.

The Beast’s roof-mounted 50-inch ZROADZ LED curved light bar and front bumper-mounted Weldex 9-inch LED light bar might seem ridiculous and excessive, but they are far from it.

Around town and in suburbia the lights are basically useless as you can’t utilize them. Treating them like high beams, you’ll rarely turn them on, and they aren’t necessary. Head out into the country, say an hour outside Nashville on dark, twisty, two-lane country roads, and suddenly these things make sense.

The term life-changing comes to mind. After experiencing them, I never want to be out in the middle of nowhere again without a set of ridiculous LED auxiliary lights. Using them as high beams–because high beams suddenly seem useless–the LED lights turn on and instantly blanket the road, the ditch, and everything in their path with a cool white light. They’re a safety enhancement for the backcountry.

While silly, driving a huge ridiculously modified pickup is actually kind of fun. Your mileage may vary, and it’s situational. It would be a nightmare in New York City, but Nashville’s spread out communities are made for vehicles like The Beast, and it fits right in if you drive an hour outside the city.

It can be fun, but you should really think long and hard about making these types of modifications to your own ride. Specifically, adding such a large lift kit or monstrous wheels and tires can make daily driving around the city a real chore. Forget parking garages, and height clearance could become an issue in some drive thrus. Then there’s the reality of getting in and out of the truck bed, which, theoretically a truck owner wants easy access to.

If you’re going to modify you’re truck, aim for some tasteful, useful changes. But if you get a chance to drive a monster like The Beast, don’t pass it up, either.