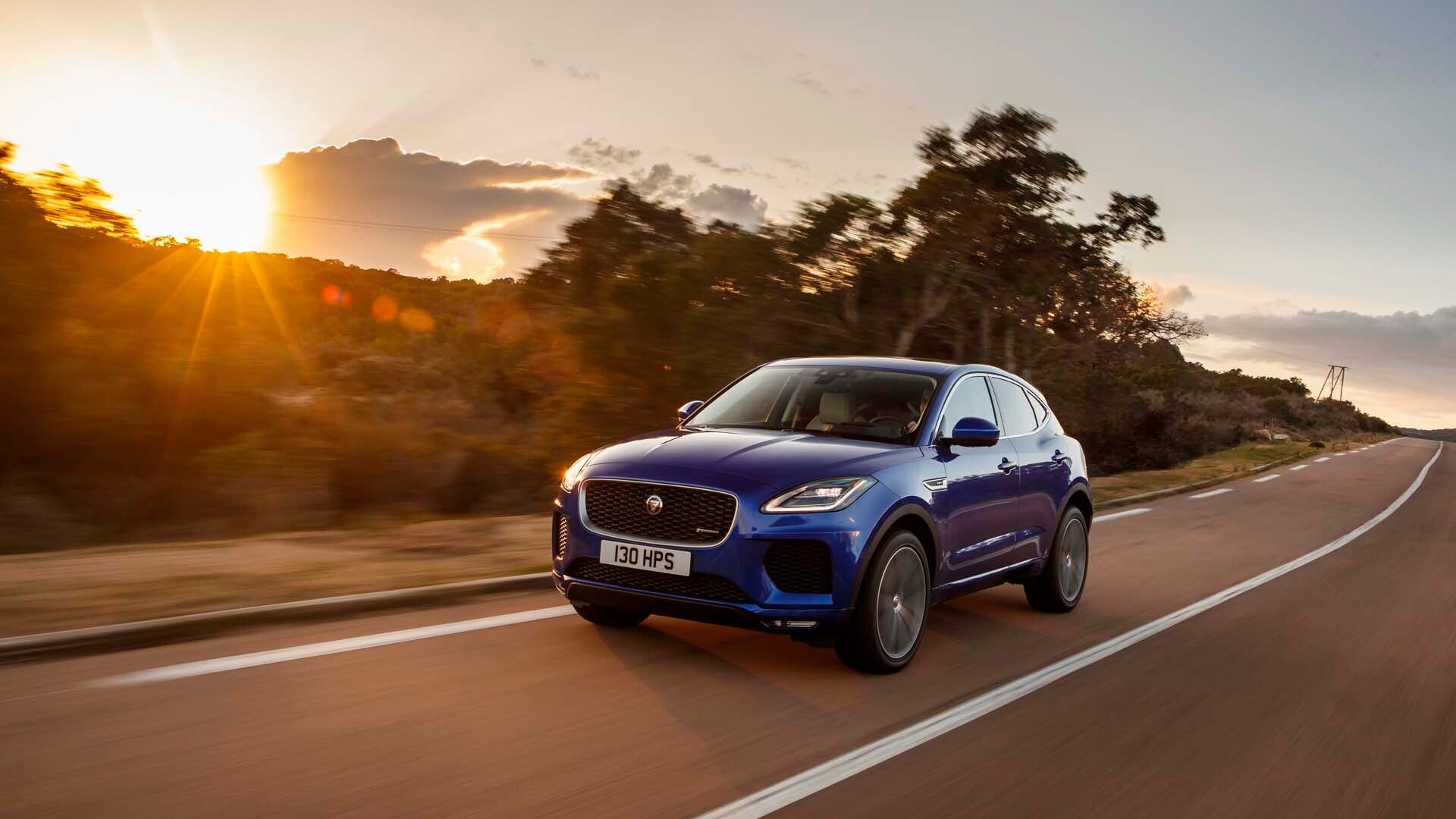 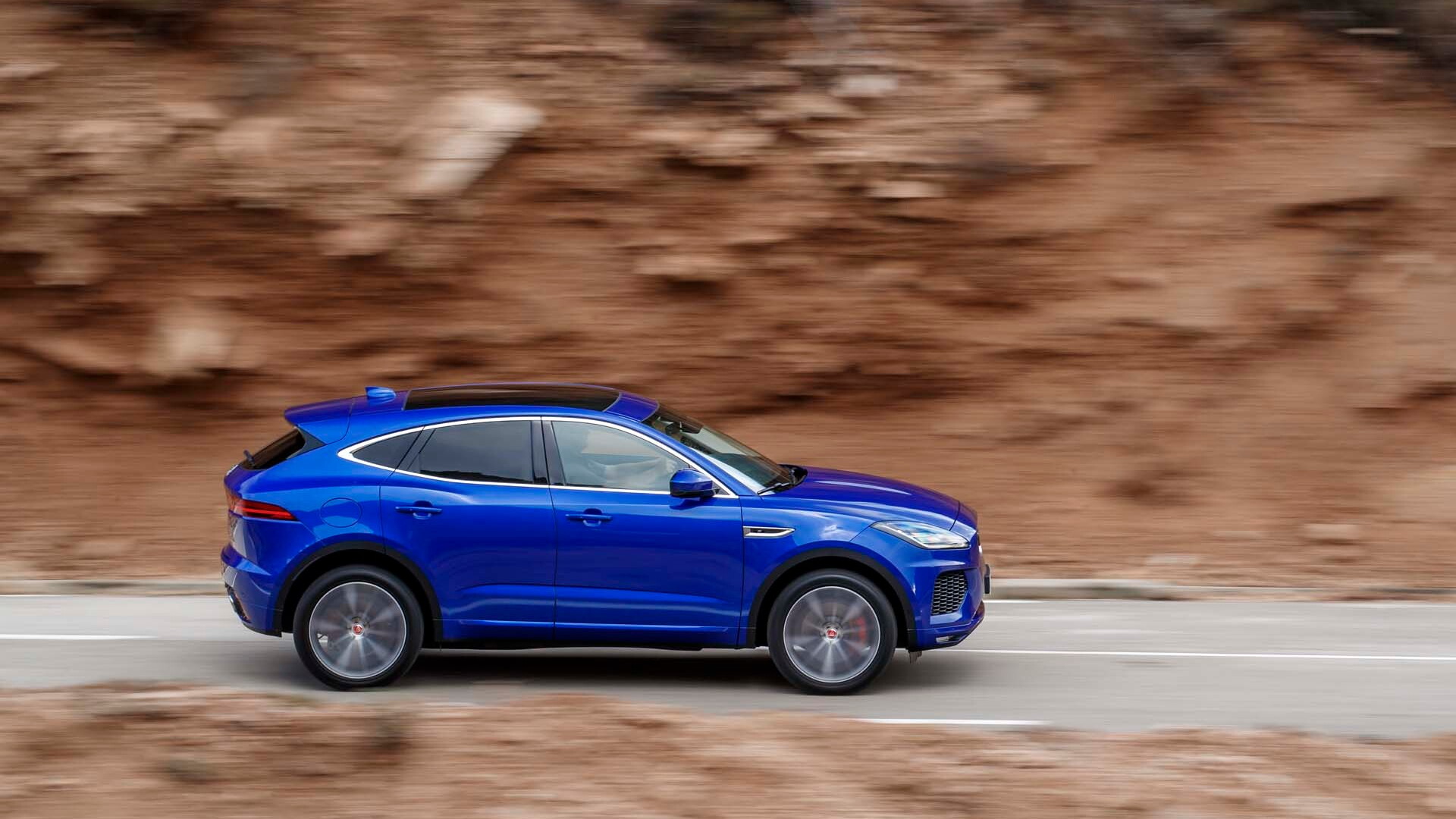 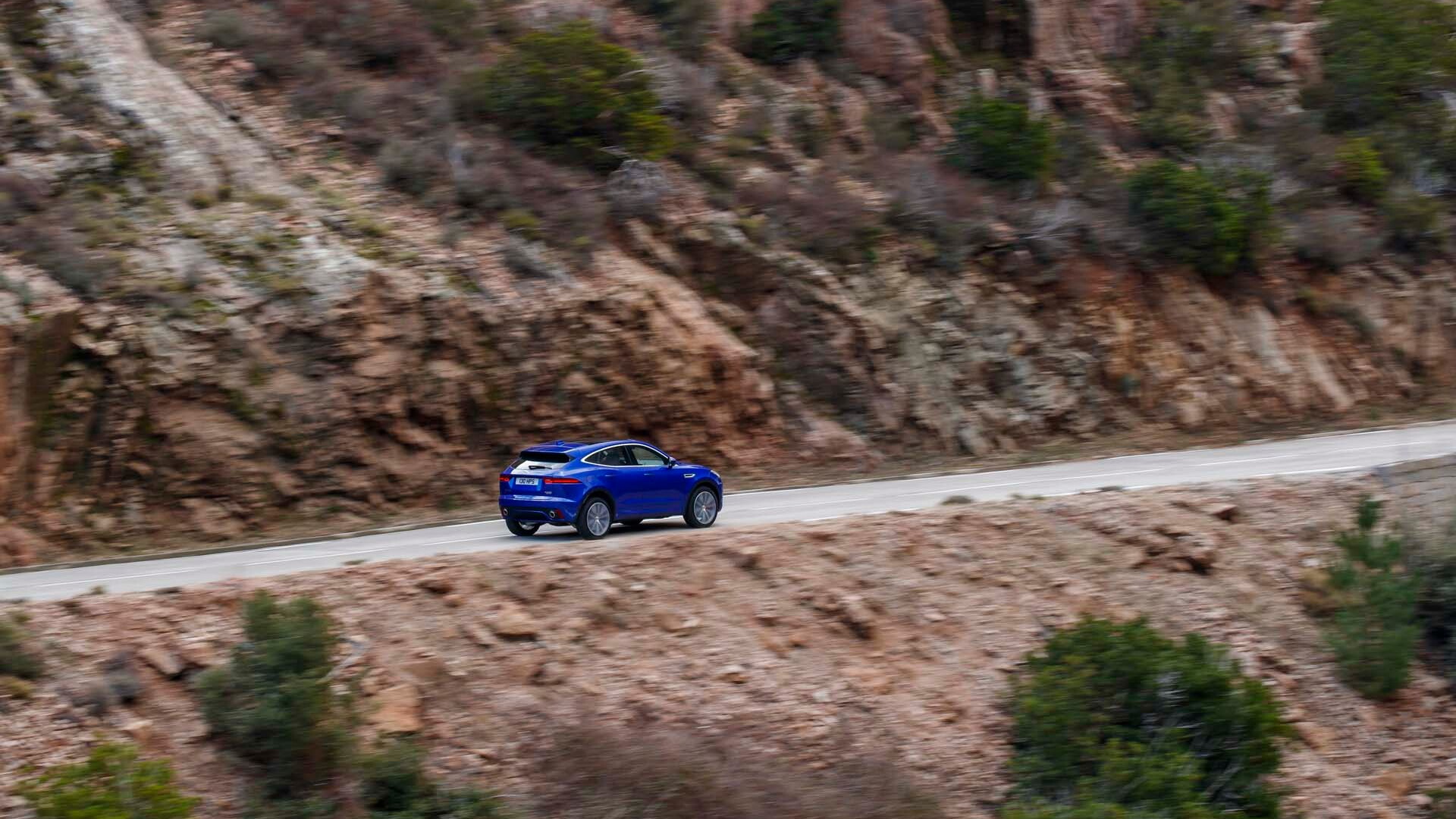 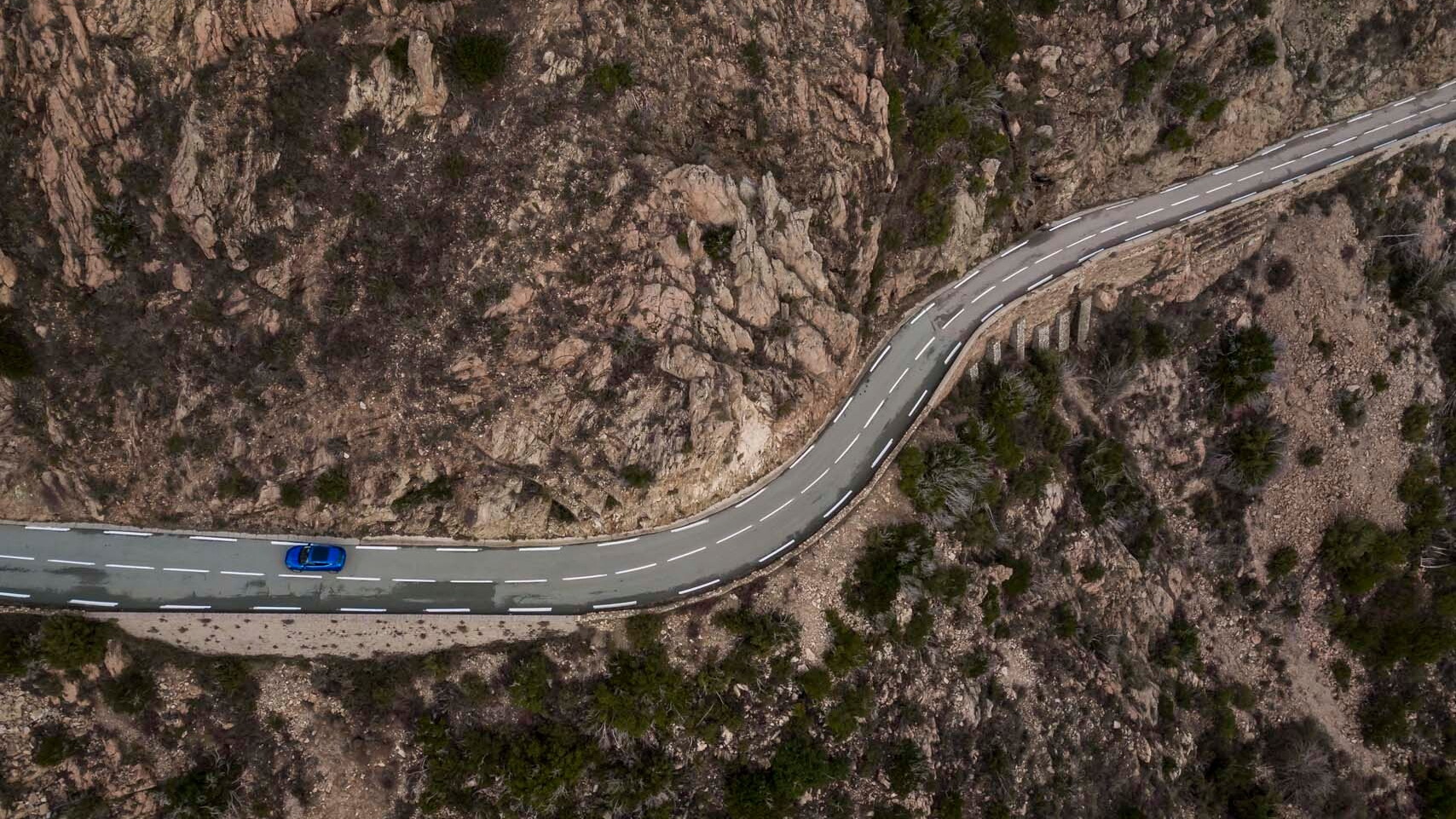 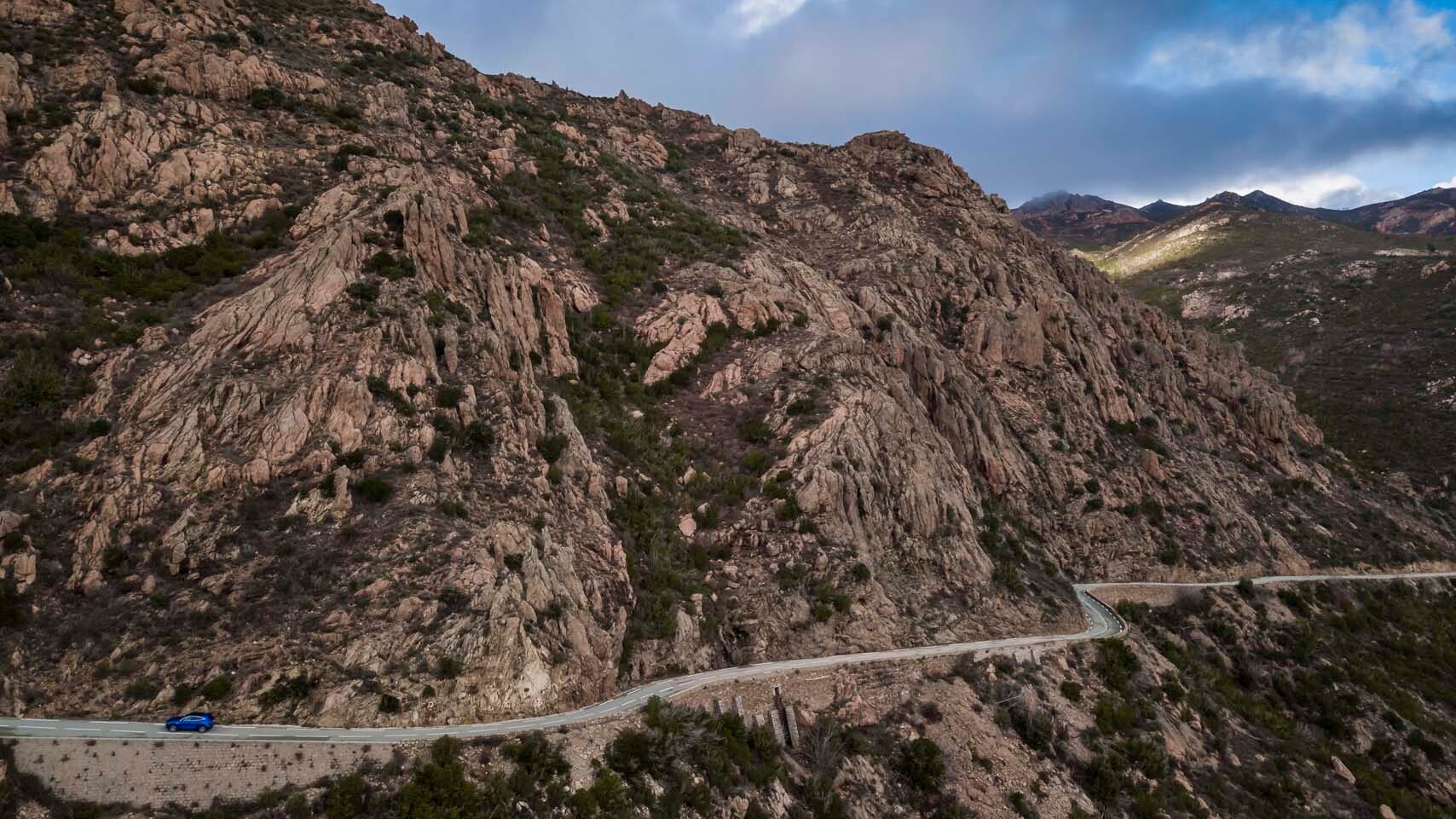 The afternoon sun in Corsica melts into the 2018 Jaguar E-Pace’s sumptuous lines. The E-Pace needs a lot of light.

After all, it’s instantly familiar. Its shapes raid Jaguar’s closet and wrap them around a compact crossover—none of this is a bad idea.

The running gear has a family resemblance to the Range Rover Evoque and Land Rover Discovery like all three were Baldwins. The interior of the E-Pace plagiarizes the larger F-Pace crossover, and there are hints of the F-Type sports car all the way around—but only if you squint really hard.

The pistol-grip shifter is a beacon on a mild, damp day near the sparkling Mediterranean: these narrow, dancing Corsican roads need a driver’s grip and a firm handle.

The E-Pace looks the part of a driver’s crossover.

The engine rumbles to life with a curious clatter; direct-injection is a requirement these days, but the sound it makes doesn’t help the cause. The gas versions we’re getting in the U.S. (no diesel, don’t even ask) are gruff and less refined than the sheet metal that wraps around them. The transverse-mounted 2.0-liter turbo-4—the first transverse application for Jaguar—lacks the satisfying growl of bigger-displacement engines that Jag has in the bag, but don’t expect any others in the E-Pace for now. How do we know? Open the compressed hood and there’s barely an inch to spare—let alone room for two more inline cylinders.

Summoning all 246 or 296 horses from the engine isn’t as onerous as shifting that power through the 9-speed automatic—it’s the only hesitation in the smaller cat’s gait. Paddle shifters that take the form of tabs more than paddles are included with the R-Dynamic specification; they hint at a modicum of control over the 9-speed, but it has a mind of its own. And its mind is made up: it will ask you to wait.

The lack of drama from the steering wheel belies the E-Pace’s superlative hardware. Saw hard at the helm, and there’s little indication the wheel is directly connected to the front tires. But there’s a reward for pushing hard: Jaguar’s so-called Activedrive rear end that can move power across its driveline like few crossovers can.

Borrowed from the Evoque, but perfected in the E-Pace, the system uses wet clutch packs to fully disconnect or—more excitingly—engage each rear wheel to provide added power in addition to brake-assisted grip. Working in concert with the traction control system, the Activedrive system can spin outside wheels faster, slow wayward tires without grip, or lock both wheels together in harmonious slides to power through corners. It’s a tempting whisper of rear-drive bias that the E-Pace wasn’t born with.

Activedrive provides torque vectoring in ways that other automakers lie about. Chuck the E-Pace’s nose into a corner, mash the pedal, and the back end comes around in ways that are not only fun, but also predictable. Compact crossover buyers may care about drivability like puppies care about the price of rice in China, but its inclusion hints at a larger statement for the E-Pace.

It’s supposed to be a driver’s crossover. Whether that’s an oxymoron, we’re not sure.

If looks could thrill

Back in the afternoon light, the E-Pace looks great. In this Corsican sun, everything does.

The Jaguar can’t hide its proportions and skeleton, which it shares with others in the family. Jaguar’s designers shrink-wrapped the lines of the F-Pace around a smaller 173-inch length with moderate success. The overhangs on the E-Pace are longer and more pronounced, with more space between the wheels and the wheel arches than its bigger brother, the F-Pace. Designers mitigated 6 inches of extra nose with visual distractions and crash tech, to good effect.

Although the wheel-to-front-axle length is identical to the Evoque and Discovery Sport, the E-Pace looks longer thanks to its forward-sloping windshield, plus squinting headlights that don’t reach too far toward the wheel arches.

The E-Pace is wider than competitors, which according to Jaguar are the Mercedes-Benz GLA and BMW X1. The Jag is a smidge bigger than both—perhaps a class larger—and we see a natural competitor in the Alfa Romeo Stelvio not only in performance, but also in achingly beautiful shapes translated into a crossover.

The E-Pace’s window lines reach up toward a gently arching roof that drops gracefully toward the rear end. The window line ends where the rear haunches start. Strictly speaking, these curves are wildly unnecessary. In France, they’re not only appreciated, but also celebrated. Around back, there’s a squat shape punctuated by two rear exhausts that burble a raspy note.

Inside, the E-Pace leaves more on the table than the F-Pace. Even in top trims, the E-Pace’s roots as an entry-level luxury crossover show through: the stitching on the dash is unconvincing and the knobs, switches, and center console have a temporal feel. If, five years from now, Jaguar is using the same materials for its cars, I will eat my paycheck.

It’s all part of a bigger story.

Jaguar needs the E-Pace to assert itself against competitors that have a 10-year head start with crossovers. The plot is already developed.

Jaguar's story is one of a driver-first compact luxury crossover that it largely delivers on. The lithe little utility vehicle’s hardware, looks, and stance view roads as conquerable terrain, but its daily reality is submissive and affordable starting under $40,000—and irresistibly good-looking.

For me, and mankind before me, falling in love in France is easy.