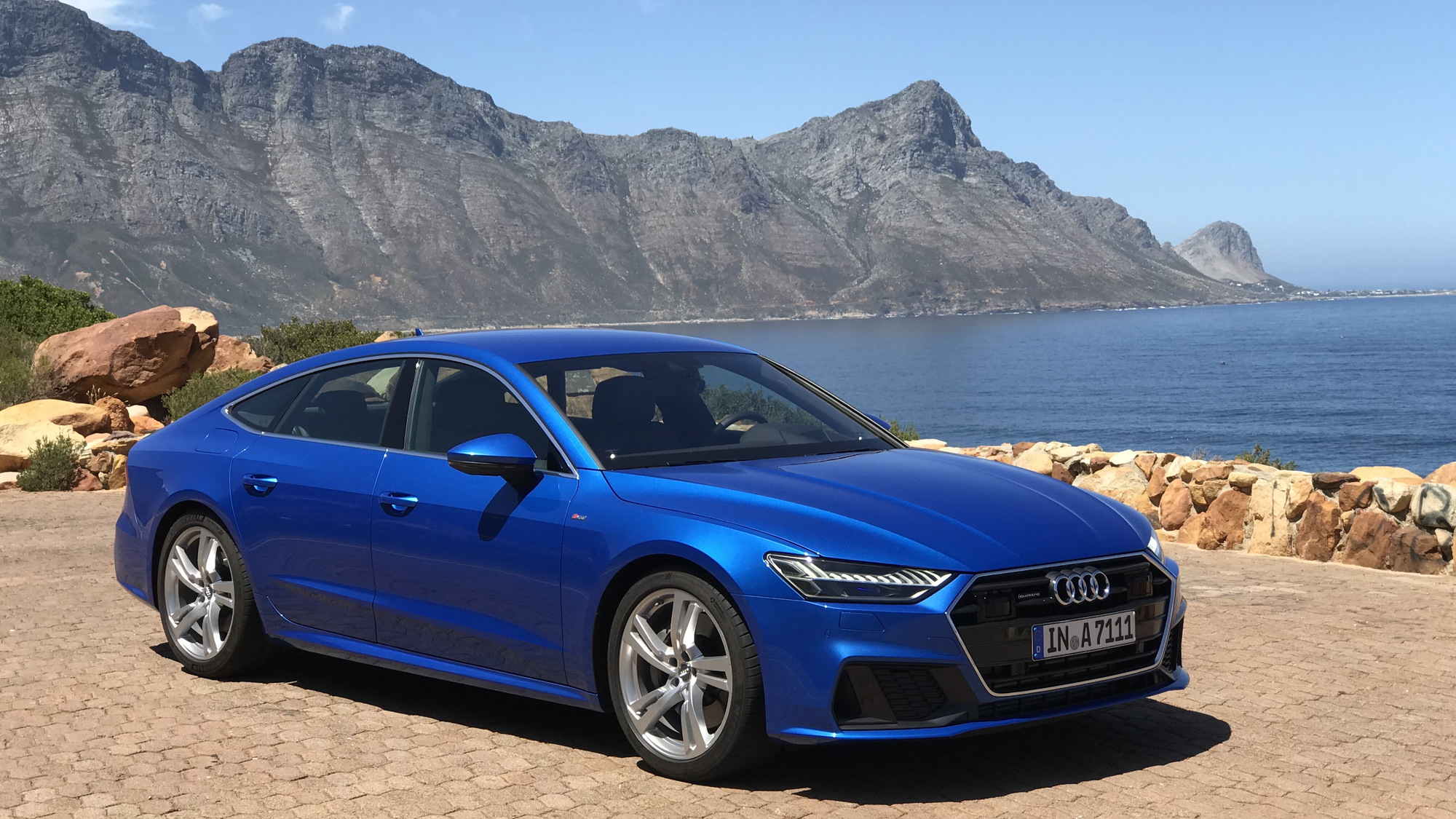 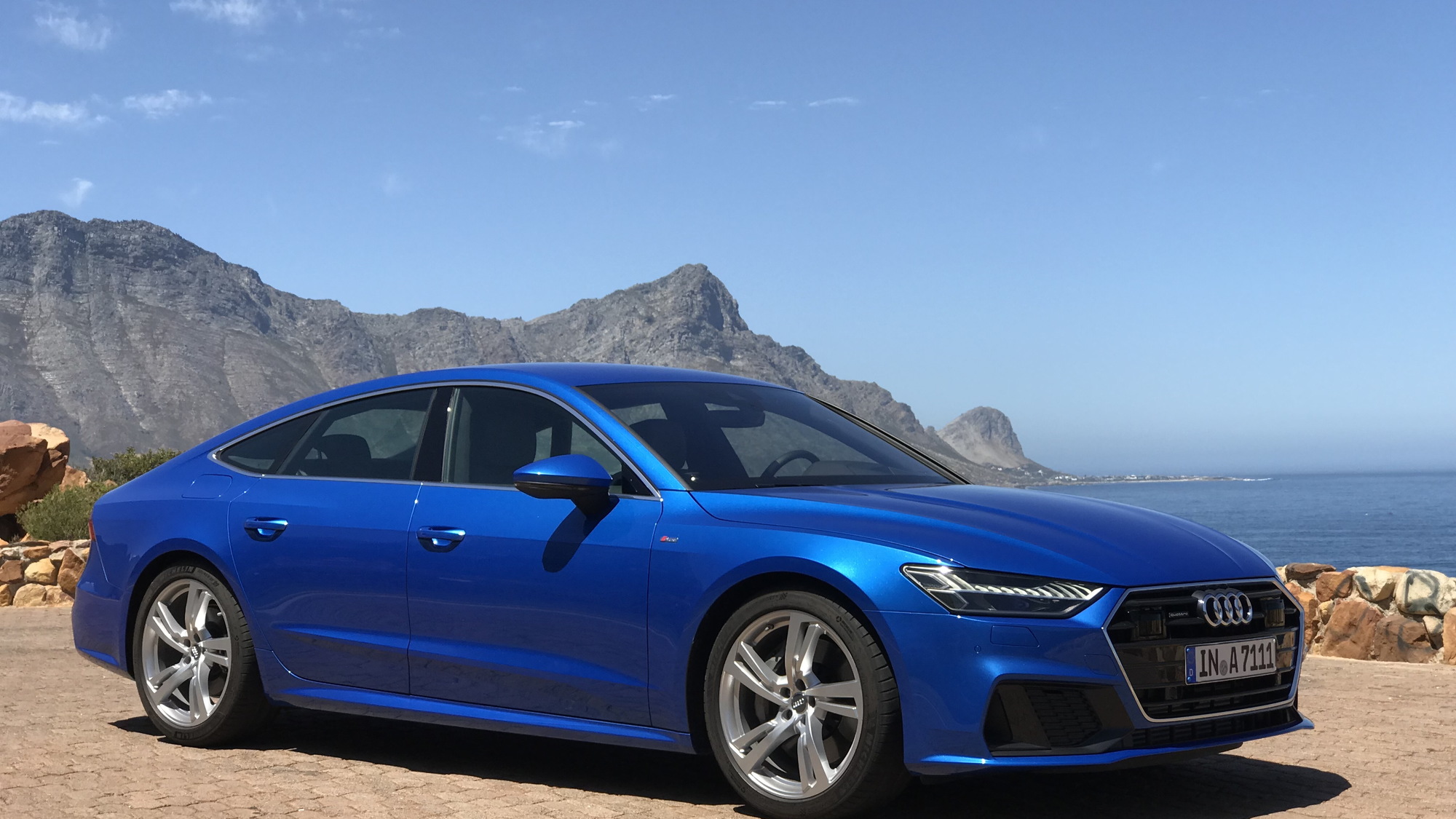 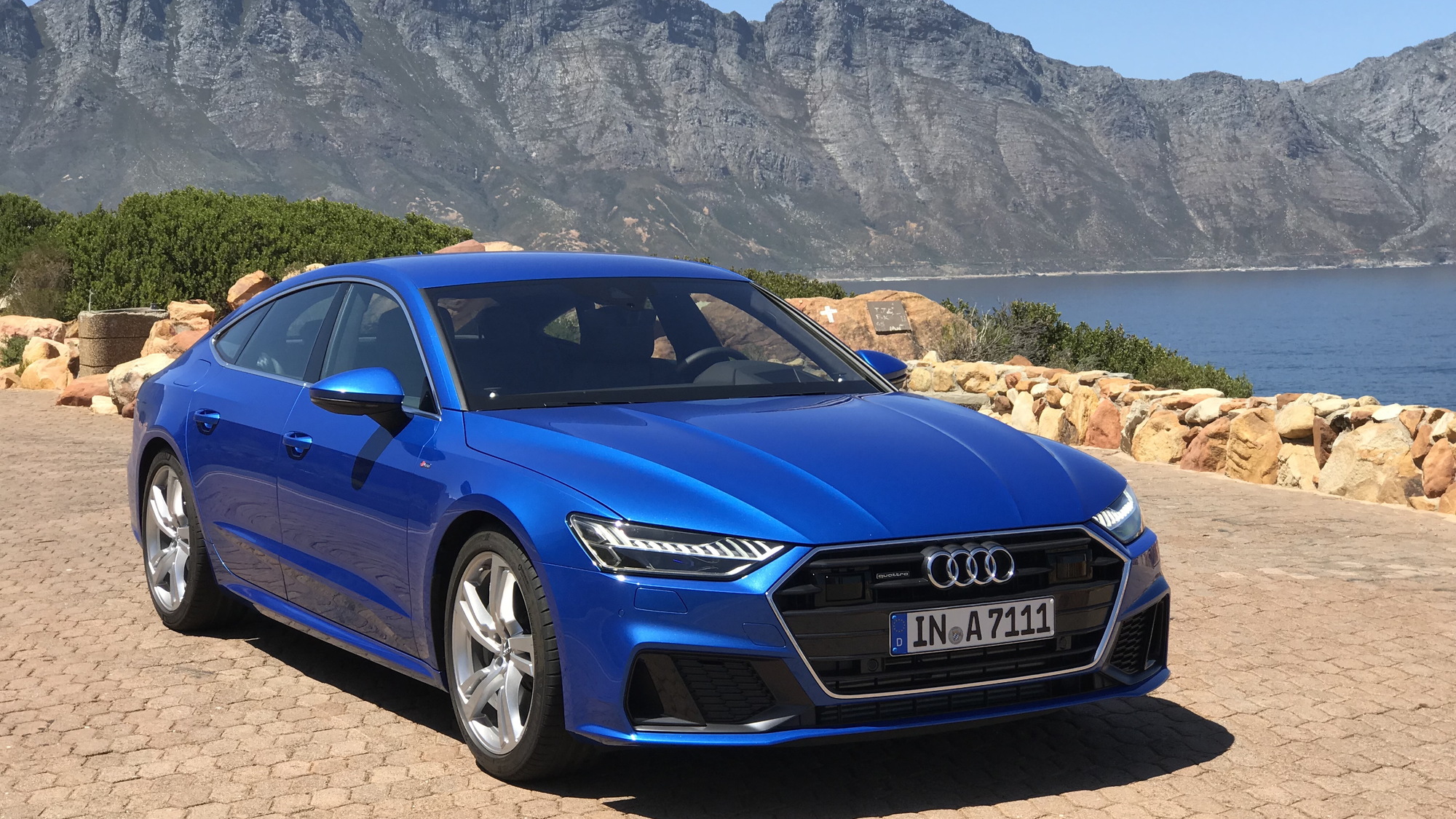 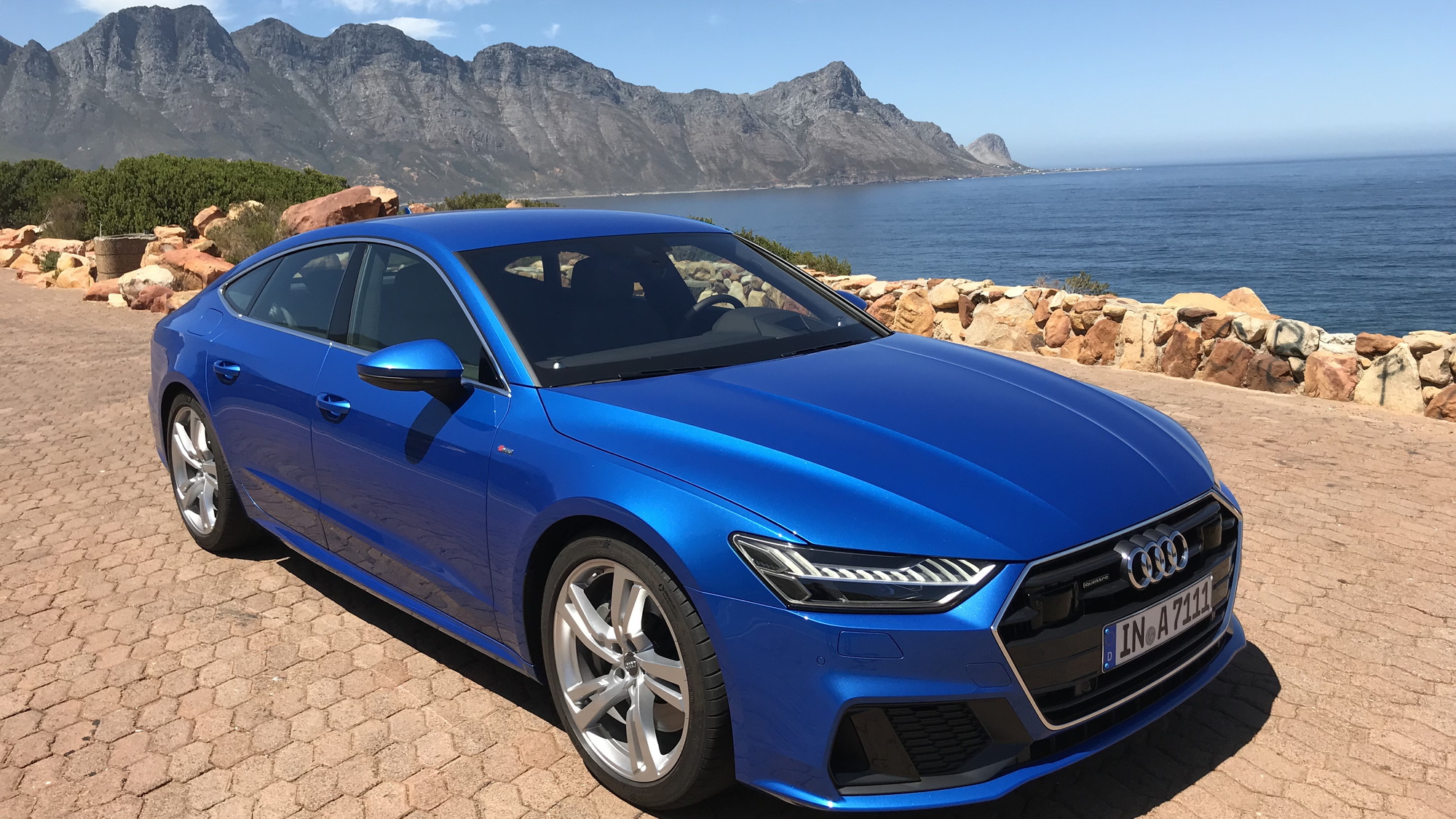 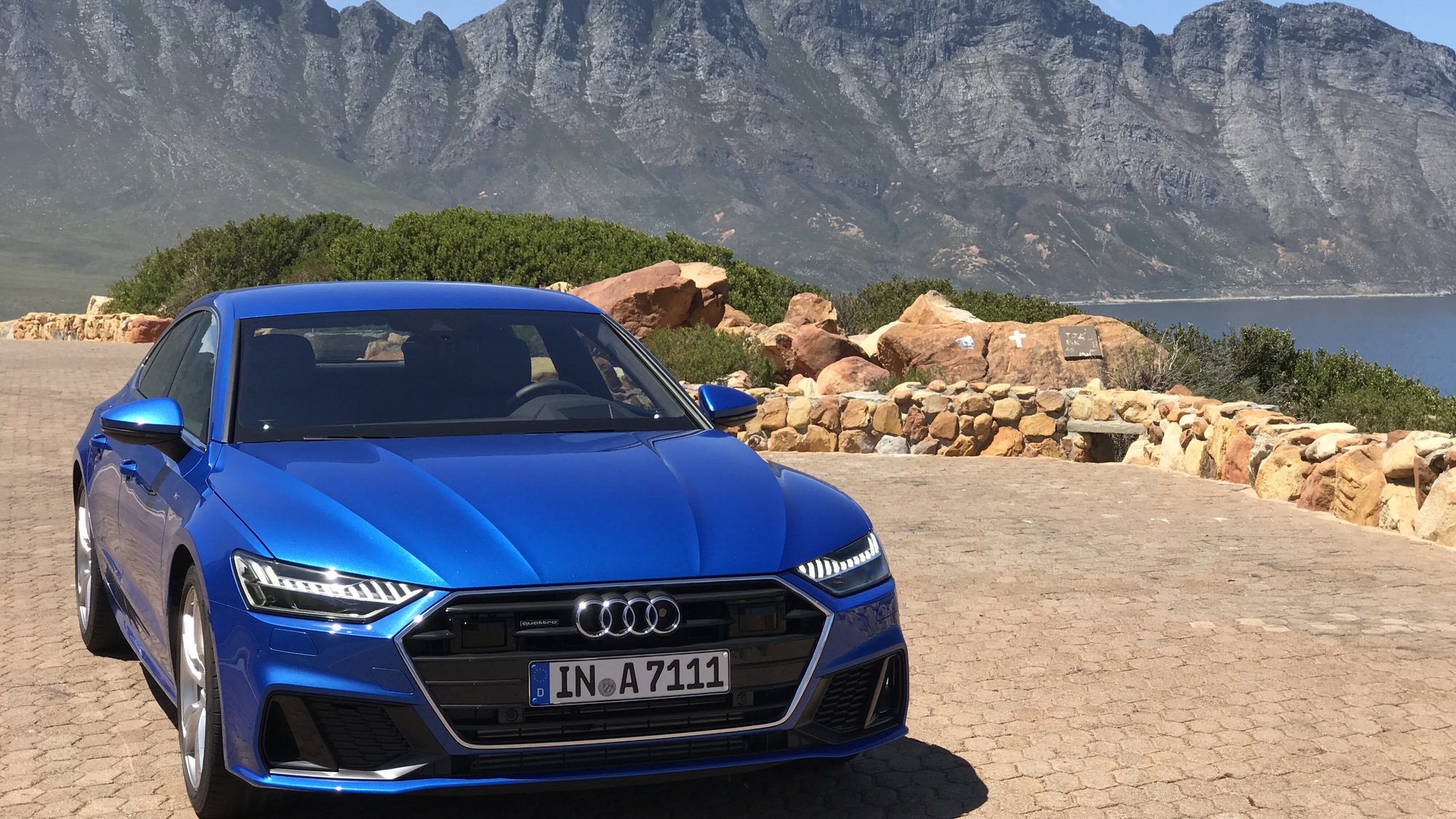 Cape Town, South Africa - The South African landscape is unusually parched. Late January is midsummer here, and the country is in the throes of a drought that threatens the water supply. Day Zero is April 16, about a month before the rainy season that could stave off this water crisis. It's an impending problem for a beautiful country still transforming from the oppression of Apartheid to a more equal society.

I can't help but feel guilty behind the wheel of the 2019 Audi A7, a luxury car that represents a transformation of its own. It started when Audi set out to turn the A6 sedan into a four-door coupe and wound up with the 2010 A7, a grand tourer that delivered equal parts beauty and utility with its sleek hatchback shape.

This is the second-generation A7. The coupe-like hatchback styling remains, this time more chiseled with sharper lines, but this car is more evolved, more advanced, and more in keeping with a modern Audi.

My morning consisted of a 90-second shower paired with a fair share of guilt, and now it's time to get a taste of the new A7. It’s an odd thing to drive a luxury car in a country with income inequality issues that far outstrip any we see in the States. Yes, Cape Town is cosmopolitan, but the outskirts of the city are dotted with shantytowns that house many of the city workers, who travel back and forth in ubiquitous white vans. To make things more confusing, we are driving left-hand-drive cars on the left side of the road. First-world problems in a third-world country, right?

Audi has arranged for us to set up camp at the beautiful Da Capo Vineyards outside the city. Affording beautiful vistas and nearby access to coastal roads, it's every bit as swanky as an Audi owner might expect. Getting there, however, requires a drive through one of those shantytowns, a reminder that Apartheid still holds an ugly legacy here. Abject poverty and this beautiful estate sit no more than a mile apart. Still, the locals appreciate the car, with kids running alongside it as we pass.

The 2019 Audi A7’s advanced technology starts under the hood, which is home to a familiar 3.0-liter turbocharged V-6 that sends 340 galloping horses through a 7-speed dual-clutch transmission. What’s different is the addition of a 48-volt mild hybrid system that makes the stop/start technology work as smoothly as you please and keeps the A/C on at stops. European models also benefit from a coasting function that shuts off the engine when not needed between 34 and 99 mph to save fuel (0.7 liters per 100 kilometers to be exact), but that system was deemed to restart a tad too slowly when re-engaging the throttle for American tastes.

The engine works well with Audi’s 7-speed dual-clutch transmission, shifting quickly and smoothly, even though the dual-clutch is older technology in a car brimming with the latest features.

The twisty coastal roads show that the A7's handling is controlled and responsive like a grand tourer should be. Suspension and platform technology play important roles here. The concept of the Audi aluminum spaceframe is gone, replaced by a spaceframe that employs a mix of various steels, plus aluminum to use stronger materials in the right areas. As a result, the A7’s structure is sturdier, safer, and lighter. Torsional rigidity improves by 10 percent, lateral rigidity is up 30 percent, and total weight is down by about 240 pounds in the European model.

The 2019 Audi A7 isn't due for release in the U.S. until the fourth quarter, so the equipment list isn't set yet. We do know the base suspension will consist of steel springs and fixed dampers. A stiffer sport version with a 0.4-inch lower ride height may be offered as well. At the top of the lineup will be an air spring suspension with adaptive dampers. All the cars I'm driving have the air suspension, which teams with those adaptive dampers to make the A7 glide comfortably over ruts and bumps, even with the available 21-inch tires.

With any suspension, Audi’s quattro all-wheel-drive will be standard. This system is set to run with a standard 40/60 front/rear torque bias and it can funnel about 80 percent of the torque to either axle depending on where the grip is.

U.S. buyers will almost certainly be able to opt for Audi's sport differential, which vectors torque on the rear axle to help the car rotate. And if Audi’s product planners don’t feel the A7 will interfere with future S7 sales, they may also offer the Dynamic All-wheel Steering system that varies the front steering ratio between 9.5 and 16.5:1 and adds a rear-axle steering system that can turn the rear wheels up to 5 degrees opposite of the fronts at parking lot speeds. The rear steering cuts 3.6 feet off the turning circle and turns the rear wheels 2-2.5 degrees opposite the fronts at speeds up to 37 mph to virtually shorten the wheelbase in corners. Let's hope both of these systems are offered, so we can create our own semi-rich man’s S7s by adding them.

The cars I'm driving have the Dynamic All-wheel Steering system as well. I feel no strange transitions between steering ratios when increasing or decreasing speed, and the rear-axle steering makes this big car feel smaller than it is through tight corners. It's one hell of a way to enjoy the twisty coastal roads under the blue sky at the bottom of The Dark Continent.

Audi has made sure the A7 can handle this type of abuse, too, outfitting it with healthy brakes. As I attack the corners, I give them a workout, clamping down with six-piston calipers on 13.8-inch ventilated front rotors and never experiencing a soft pedal. Again, this is just the A7. The S7 and RS 7 will get more robust equipment.

Inside it’s a story of technology, luxury, and utility. Audi has offered exemplary interiors for years, and the A7’s cockpit trades on that reputation with high-quality materials, including open-pore wood, multiple choices of leather, Alcantara, and the cool look of metal trim. Fit and finish is pristine, and it’s all outlined at night in your choice of 60 colors of ambient lighting, much of which outlines the cockpit's contours.

It’s the tech, however, that dazzles most. I have three screens to gaze upon, plus an available head-up display. We've seen the programmable 12.3-inch Audi Virtual Cockpit before, but the MMI Touch Response system is new, and it trades buttons for touch controls and voice commands. It features a high-mounted 10.1-inch touchscreen to control your navigation, music, and phone needs, plus a lower 8.6-inch screen that shows climate functions and drive modes and accepts handwritten inputs.

MMI Touch Response is a new direction for Audi. It uses the latest graphic chip sets, reacts quickly, responds to common control gestures from smartphones, and provides haptic feedback. Its menus seem logically laid out, too. We’ve had only limited experience with it, so we’ll need to live with it to understand its daily appeal.

Interior space continues to be a strength of the A7. Front-row occupants have lots of space, and rear-seat passengers are made even more comfortable thanks to a longer wheelbase that improves rear legroom by 0.8 inch. The hatch area offers real utility, too. It has 18.9 cubic feet of cargo space--the size of a large trunk--and that expands to 49.1 cubic feet when you fold down the second-row seats. Who says you need a crossover?

When it debuted in 2010, the Audi A7 was a stunning car that was at the forefront of technology. Over the years that have passed since, it has aged well but fallen behind the technological curve. The 2019 redesign corrects that issue and then some.

In addition to all the technology already mentioned, the 2019 model will offer such features as laser high-beam headlights, two automatic parking systems (including one that lets you get out and park the car in a garage using your smartphone), night vision, every active safety feature you can think of, and a Level-3 Traffic Jam Pilot self-driving system that can follow traffic at 37 mph and below. As a Level-3 self-driving technology, it will be subject to federal regulations, so when it shows up in the U.S. is anyone's guess.

Late this year will be your first chance to get the beauty and performance of the A7 but now in a more evolved and more advanced form.

As for Africa, some good news has emerged. Thanks to a decline in agricultural water usage, Day Zero has been pushed back to May 11. Hopefully, the rains come to Africa before then. And let's also hope this beautiful country continues to evolve and advance to bring more prosperity to all.