France has vowed to end sales of gasoline and diesel cars by 2040 as part of efforts towards meeting the emission reduction aims of the Paris climate accord.

The move is also aimed at reducing pollution in France’s major cities. Recall, Paris has already started banning older cars from its city center during the week.

The latest announcement was made on Thursday by Nicolas Hulot, France’s minister of ecological transition under the new Macron government.

“We are announcing an end to the sale of [gasoline] and diesel cars by 2040,” Hulot said.

He went on to state that although the goal will be difficult to achieve, French automakers have “enough ideas in the drawer to nurture and bring about this promise.” 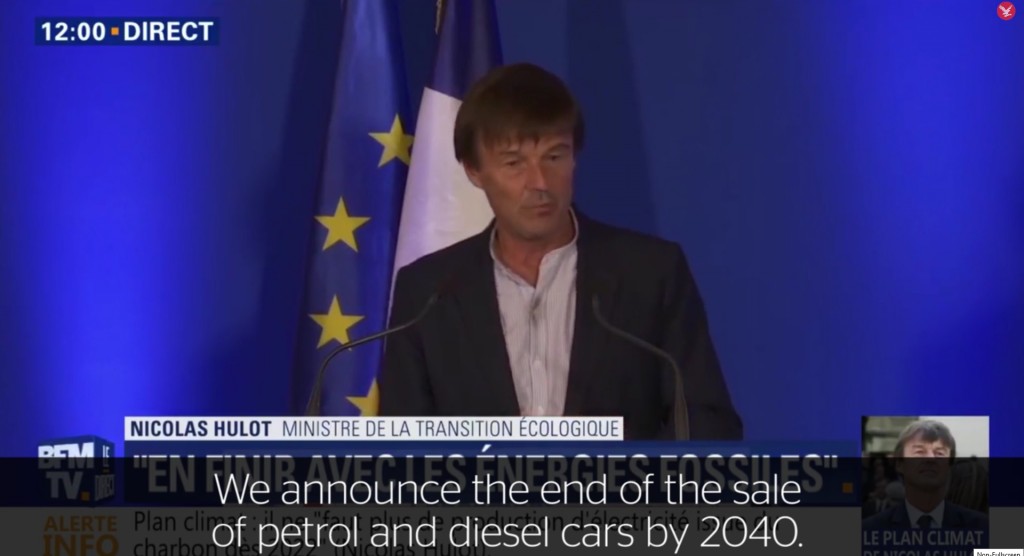 Hulot also mentioned Volvo which only on Wednesday announced it would start introducing only hybrids and electric cars from 2019.

In typical political style, Hulot was short on details. For example, it’s not clear if he meant cars powered solely by gasoline or diesel, or hybrid vehicles, too. It’s also not clear how poorer households that rely on car ownership will be able to upgrade to newer vehicles, though Hulot said the French government will look at offering some financial assistance.

Crucially, Hulot also didn't mention whether France will have sufficient grid capacity or hydrogen infrastructure to supply energy for the millions of new zero-emission cars that would be hitting French roads. One possibility we know France is looking at for the supply of energy are costly and unproven solar roads.

The new policy is not unique to France, though it’s more progressive compared to in other countries. Fellow European countries such as Norway, the Netherlands and even Germany are considering similar bans on gasoline and diesel cars. While in China, the government is offering extensive financial support for the sale and production of electric cars in an effort to curb air pollution in major cities and reduce the dependence on oil imports.