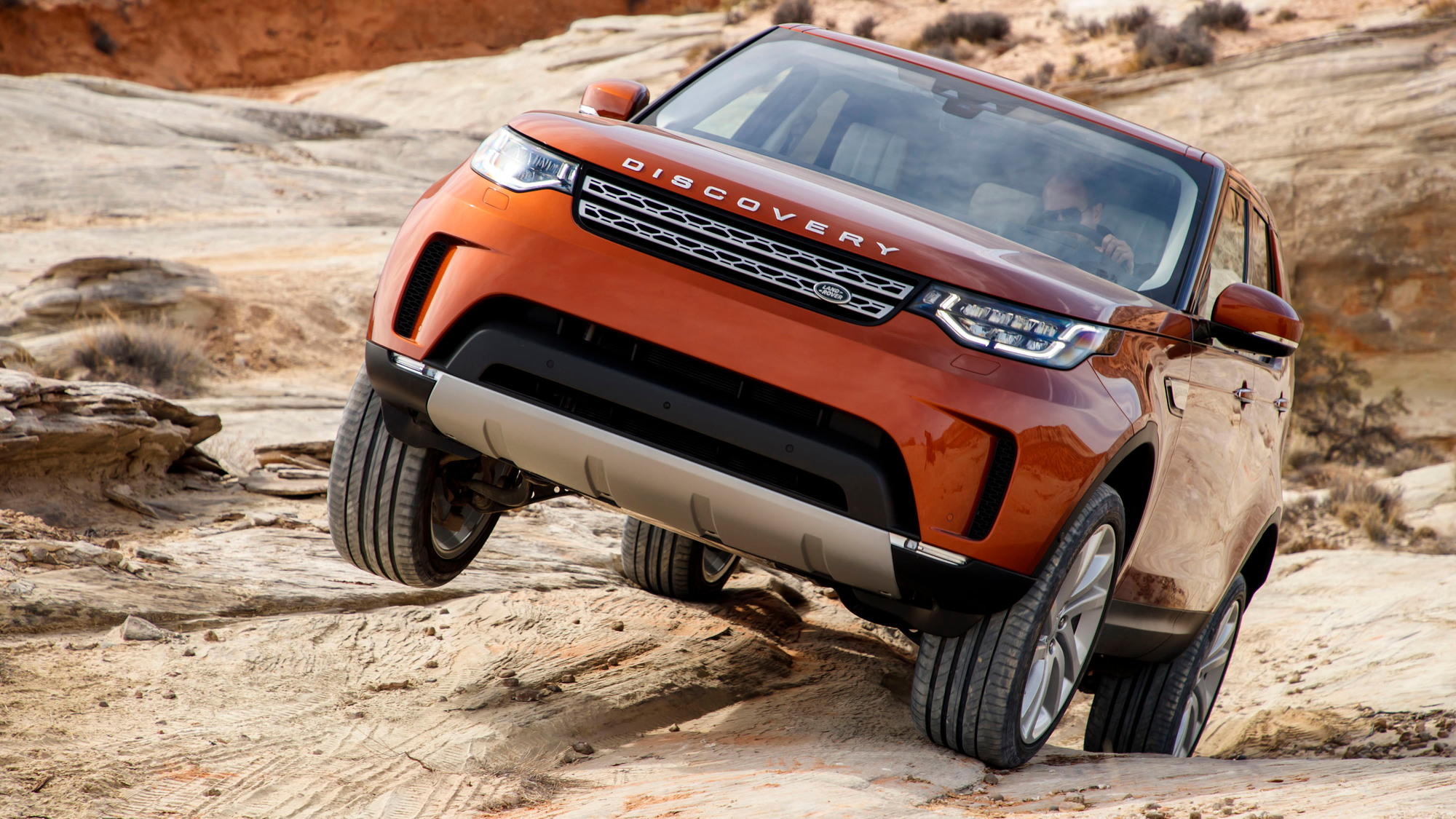 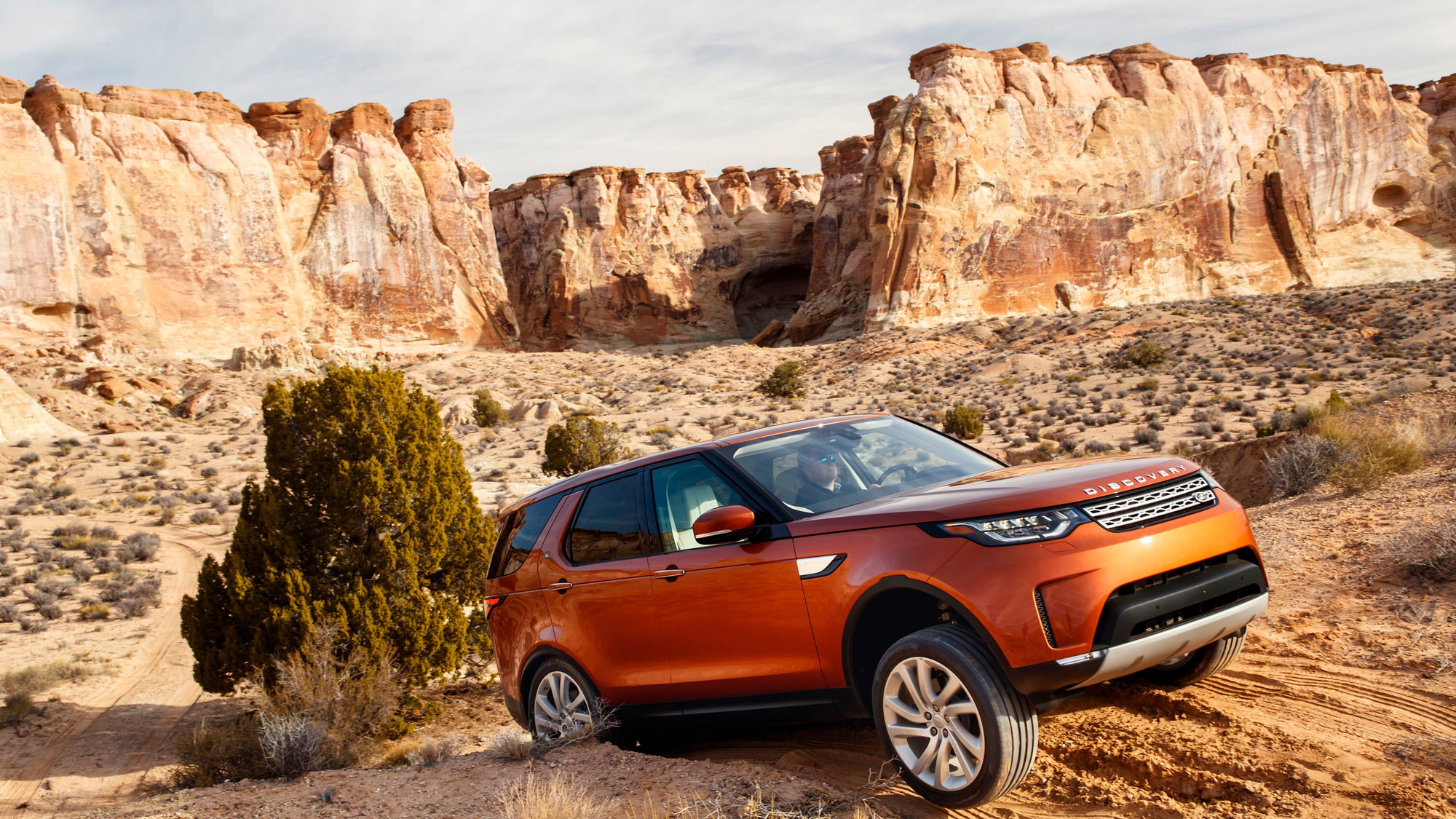 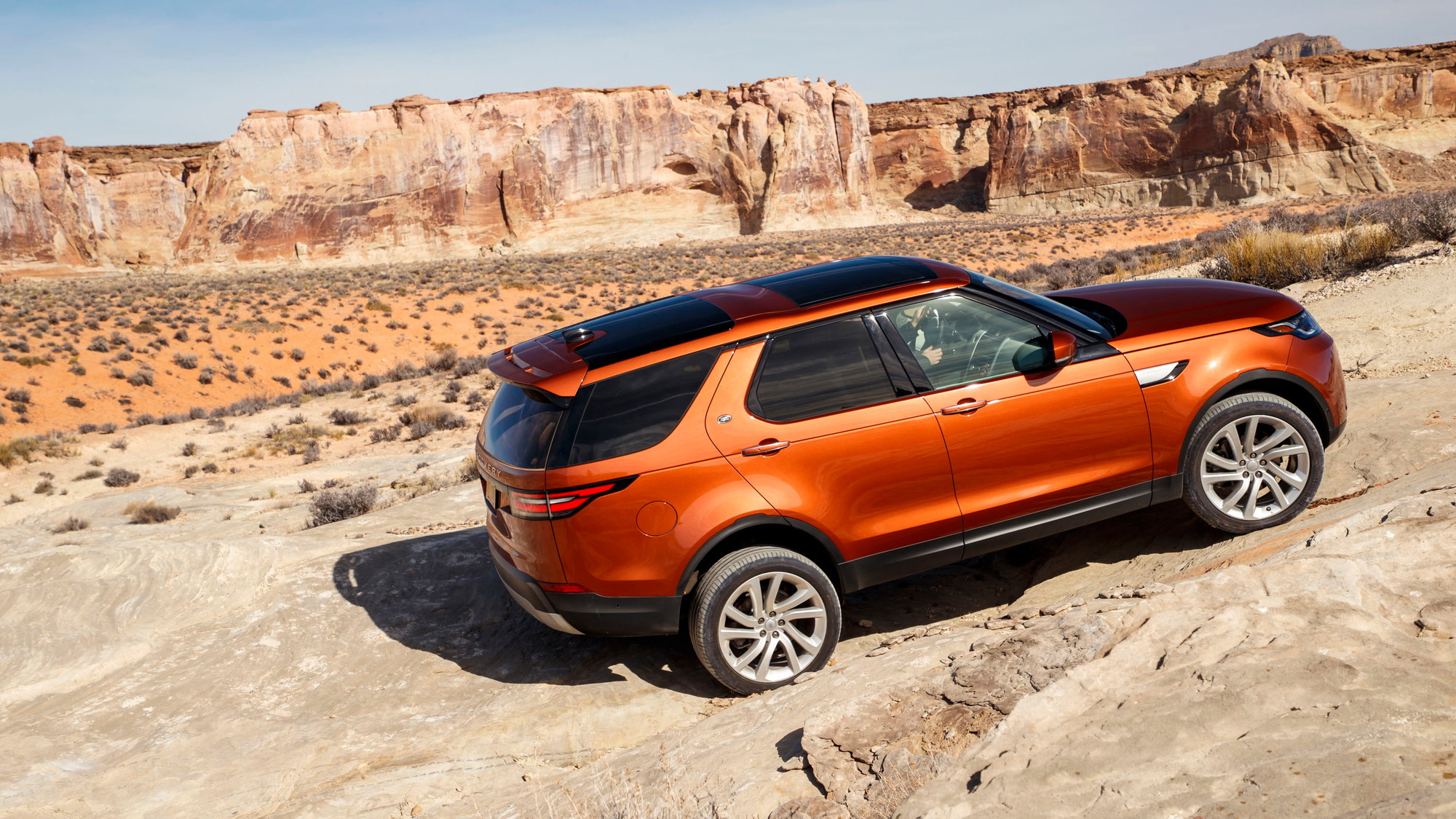 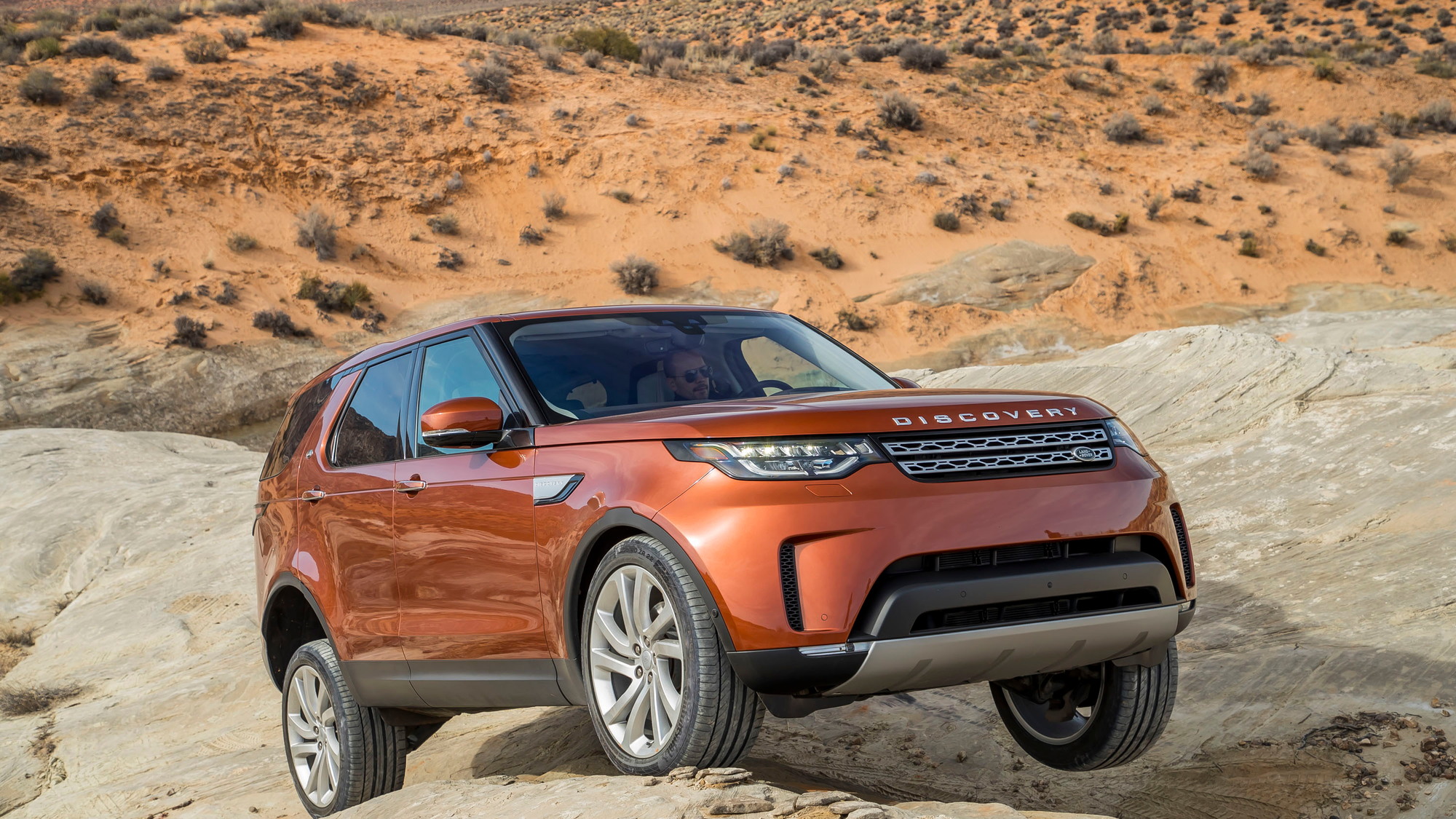 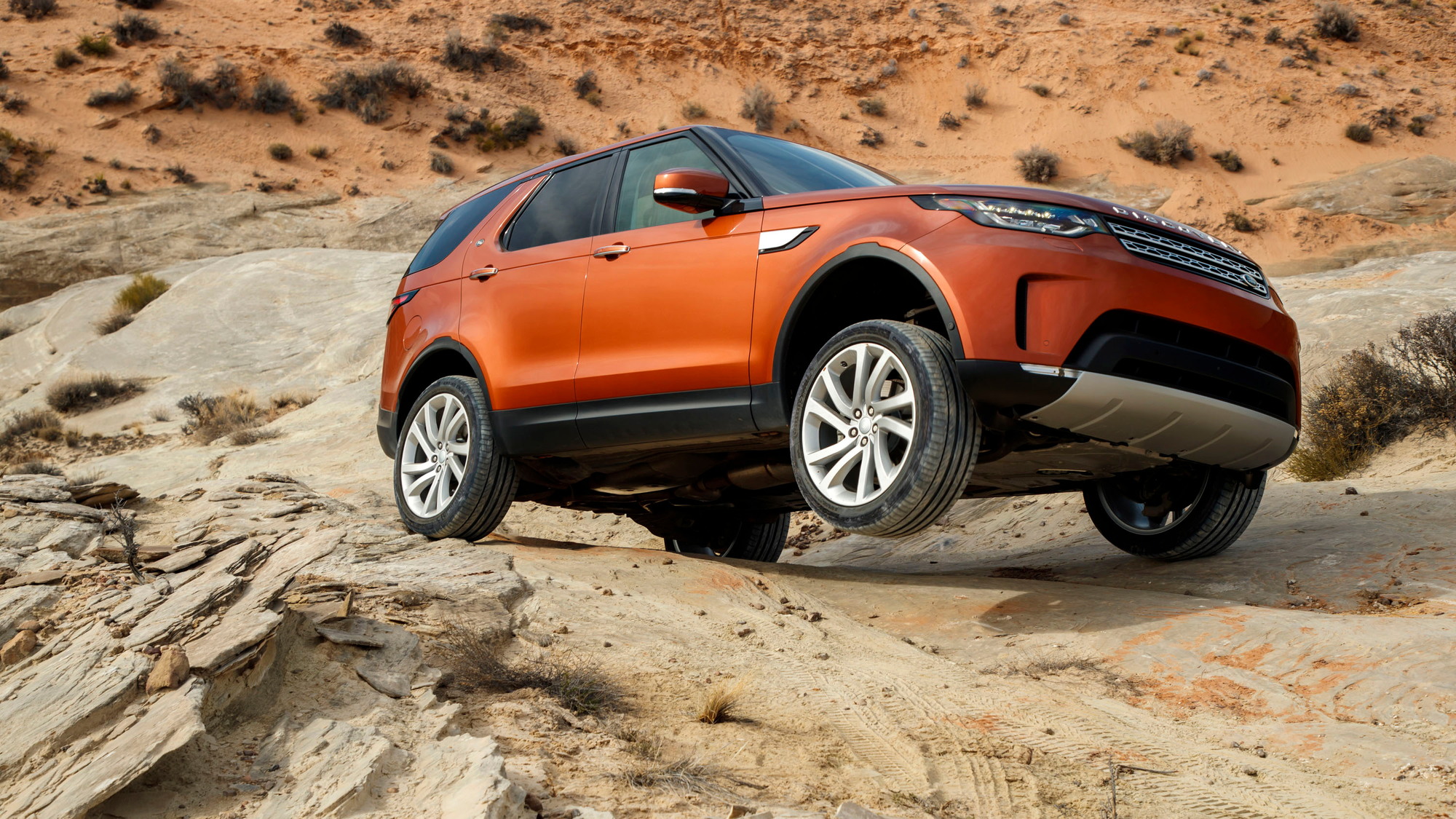 Halfway up a wall of rock that our shiny orange 2017 Land Rover Discovery was expected to climb—using what's basically off-road cruise control, no less—rested a decked-out long-wheelbase Defender 110. Even without its meaty off-road rubber and a winch, this Defender, a member of Land Rover's corporate fleet, was a drool-worthy reminder of this brand's unparalleled four-by-four heritage. In the southern Utah desert landscape, the chunky utility vehicle that has only incrementally changed since the 1940s looked at home.

When I remarked to the Land Rover-provided guide, dressed in more company swag than the accessory department at a dealership, that perhaps the Defender would be better matched to this task than a sleek new Discovery, he lowered his sunglasses and said with a straight face that we were in the more capable vehicle.

This latest Disco replaces the boxy LR4 and represents a return to the Discovery nameplate for the American market, but its anonymous crossover looks don’t suggest at first glance that it will carry on the model’s off-road legacy. As it turns out, appearances are deceiving. With a high-tech traction control system cribbed from the Range Rover line, locking center and rear differentials, and height-adjustable air suspension, it remains a formidable off-roader. Yet for the first time ever, the Disco is plush and genuinely refined—not to mention a formidable family-hauler with three rows of seats.

For once, Land Rover’s offering against the Volvo XC90, Audi Q7, and BMW X5 excels as a family-hauler. A third row of seats remains optional, folding away at the tug of a lever or, optionally, the press of a button to reveal a flat surface when not needed. A fold-and-slide second row provides class-average access to the rearmost seats, but once back there, even adults will find acceptable room for shorter jaunts. The second row offers much the same, even if it doesn’t deliver the quite commanding stadium seating-style view of previous Discoverys.

MORE: The Range Rover Velar has been revealed

Up front is where the action remains, of course, and drivers are afforded a fantastic view outwards and materials fitting with the SUV’s $50,000 to $70,000 price range. No shortage of tech is on offer; pay more and you’ll get a 10-inch infotainment and navigation system that truly operates like a tablet, a choice of 380- and 825-watt Meridian audio, and even a bracelet that “active” drivers can use on a hike or jog that lets them access the vehicle so they don’t have to carry a bulky key fob.

SE models sit at the bottom of the lineup at $50,985 (including $995 worth of destination). They’re hardly basic, but the lineup climbs from there before topping out around $75,000 for the limited-run First Edition. Most buyers will find an HSE with a few nice options like a surround-view camera system, adaptive cruise control, automatic emergency braking, heated seats, the air suspension, and a suite of off-road traction aids for around $64,000. At that price, it's almost indistinguishable inside from a Range Rover Sport.

All models are four-wheel drive, although Land Rover does make buyers of the base SE and mid-level HSE pay extra for a low-range transfer case and the brand’s terrific Terrain Response 2 traction control system. A 3.0-liter, 340-horsepower supercharged gasoline V-6 and a 3.0-liter, 254-horsepower turbodiesel V-6 are on offer, both mated to ZF’s nearly always terrific 8-speed automatic gearbox.

Underneath, the Disco makes use of the current Range Rover line’s unibody, largely aluminum architecture and fully independent coil or optional air suspension. With most models checking in around 4,900 pounds, it’s hundreds lighter than before. That pays dividends both in fuel economy—16 mpg city, 21 highway, 18 combined (gas) and 21/26/23 mpg (diesel), according to the manufacturer—and in driving dynamics.

Though hardly a sports car, the Disco holds its own on pavement. It’s a far cry from its squared-off solid-axled predecessors from decades, as you might imagine. On our drive, we were only able to sample models with the air suspension and either 20- or 21-inch alloy wheels, but all were remarkably compliant over increasingly punishing on- and off-road terrain. A thin-rimmed steering wheel styled like that found on Defenders and Range Rovers long ago delivered little in the way of road feel but nonetheless helped us confidently hustle the tall SUV through winding switchbacks at speed.

Both engines provide ample grunt, with the gas V-6 feeling sprightlier from all speeds but not delivering the instant, off-the-line torque of the turbodiesel. Oddly, the gas motor’s rumble was more pronounced inside the Disco. Though it’ll take a while to earn back the $2,000 upcharge for the turbodiesel, its smooth nature and mountain of torque make it our choice.

The turbodiesel acquits itself especially well off road, although both engines feature the kind of gentle throttle modulation necessary for loose terrain. The latest version of Land Rover’s Terrain Response 2 traction management system makes its way to the Discovery as a pricey $2,150 option on SE and HSE variants; though there are myriad tweaks, its most important is an automatic mode that does as its name suggests to adapt to whatever may lie underneath. Even with their street-oriented Goodyear Eagle F1 AT rubber, our Discos hardly slipped their way through deep sand, wet clay, and off-camber slickrock.

At the press of a button, the optional air suspension rises to the occasion, increasing ground clearance from 8.7 to 11.1 inches. Both front and rear angles of approach and departure climb to almost 30 degrees. Look beyond the Disco’s almost generic Ford Explorer-esque shape and short sidewalls to find that there is huge capability lurking where it seems least expected.

And the latest evolution of Land Rover’s off-road cruise control, which it calls All Terrain Progress Control, makes climbing any obstacle easy. Too easy, frankly, since Land Rover hinted that autonomous off-road driving is in our future. A press of a center console button activates the system which maintains a set speed up or down an obstacle. It only requires the driver to move the steering wheel as needed since it applies the brakes, it accelerates, and it modifies traction control parameters.

The Disco’s built-in ruggedness isn’t immediately obvious behind its sleek new styling, but with its ability to lug seven passengers in relative comfort over moguls the size of small villages, it is perhaps the most exceptionally talented Land Rover ever built. Just don’t tell the Defender.