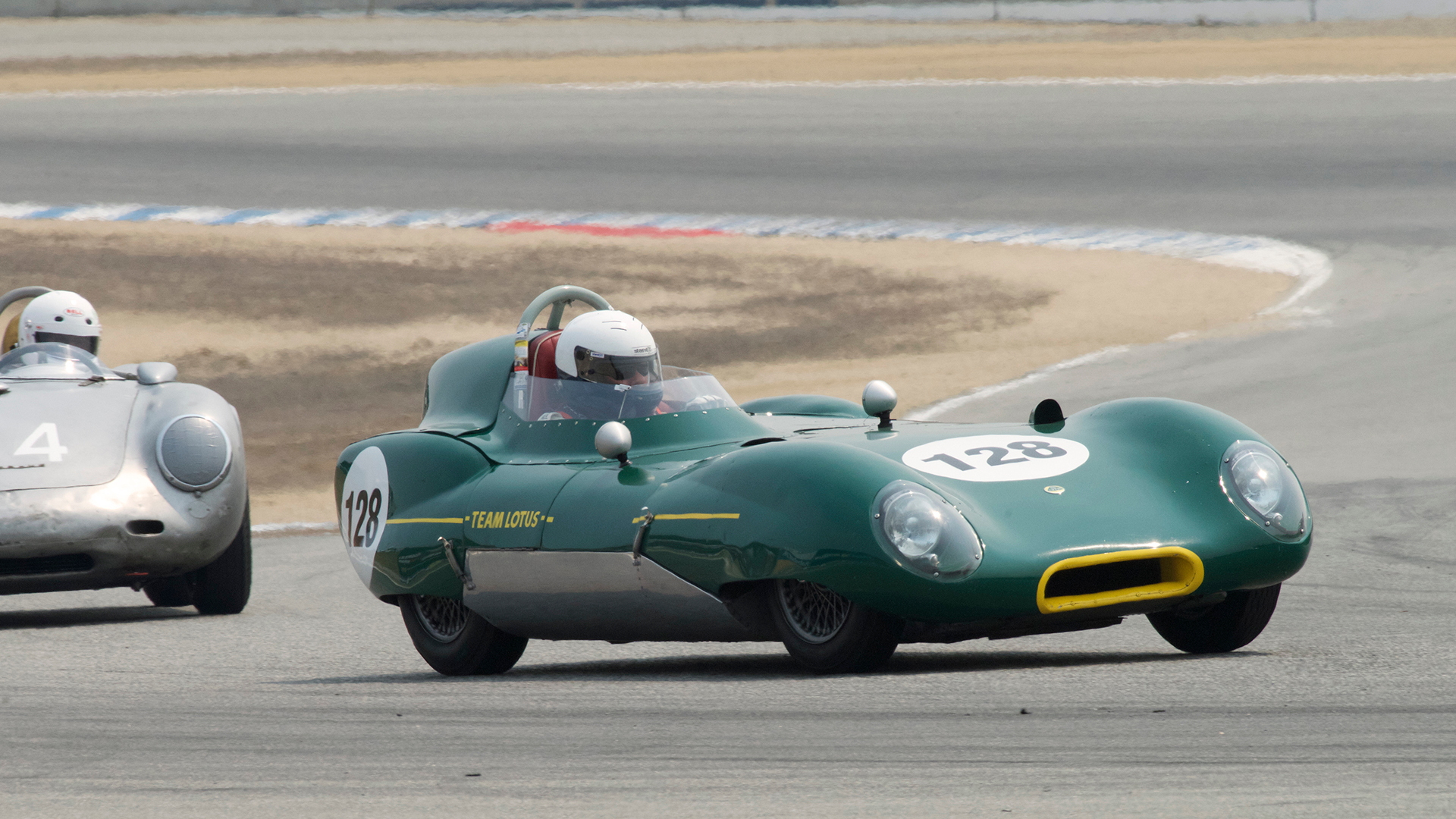 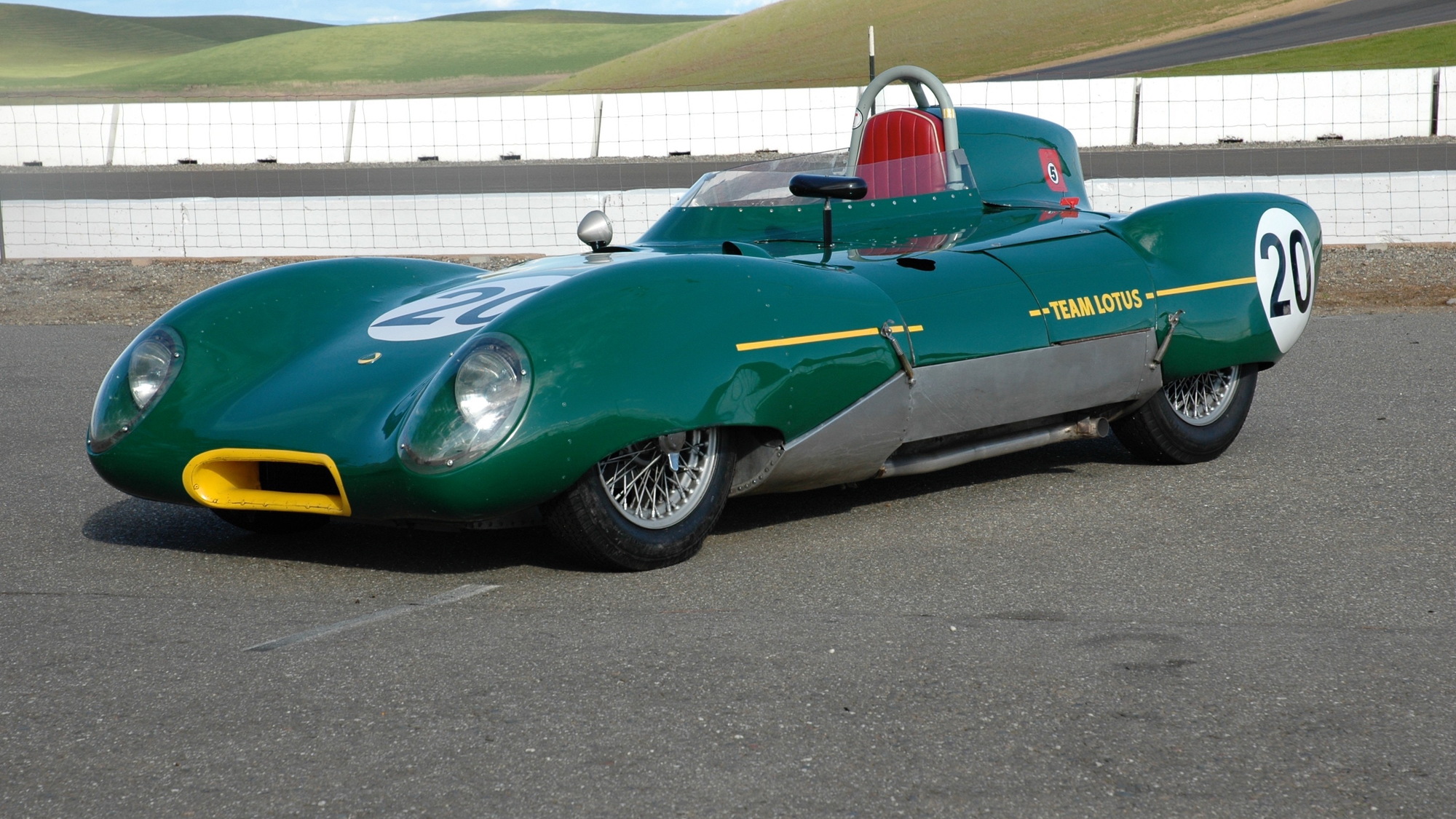 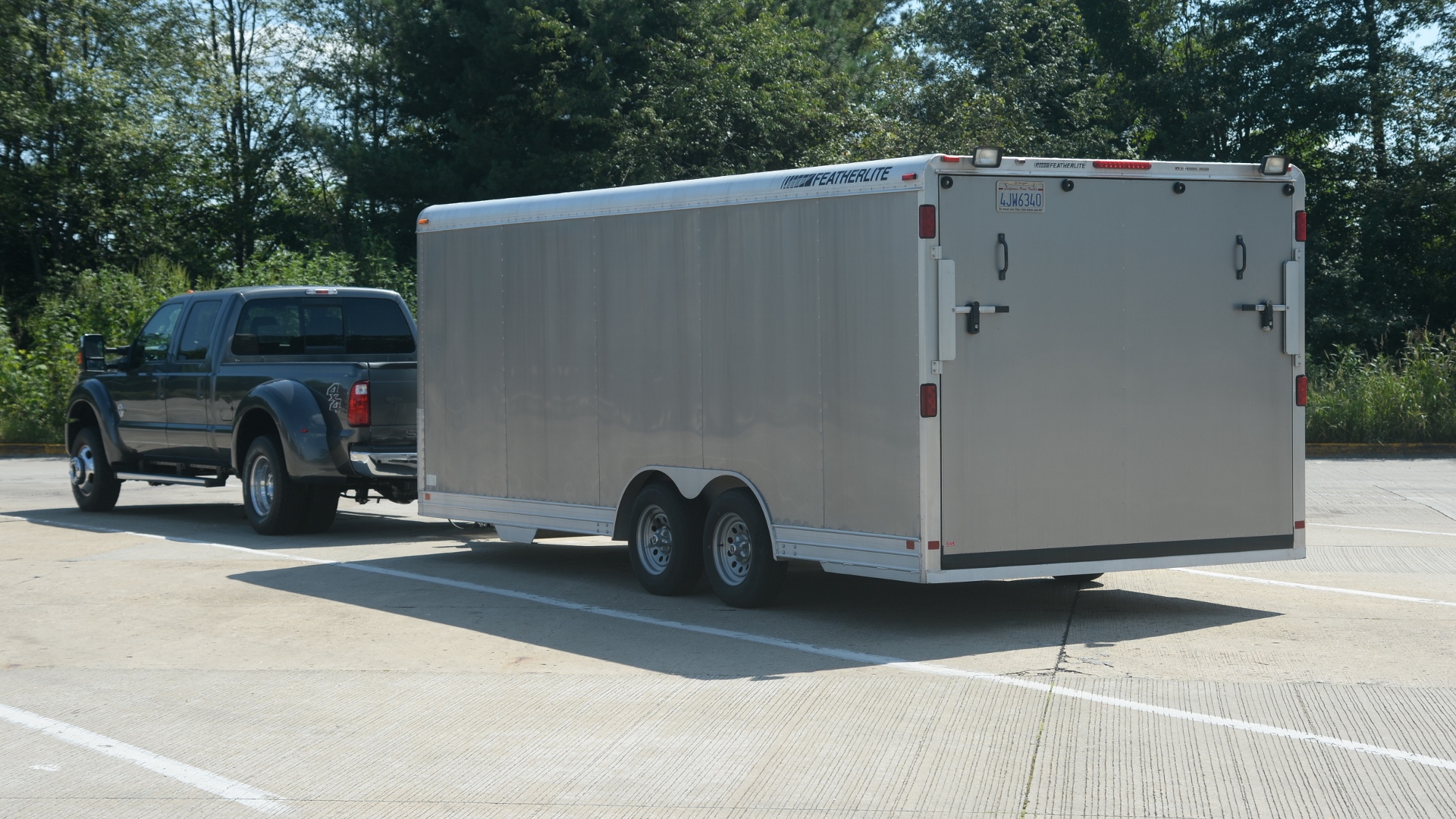 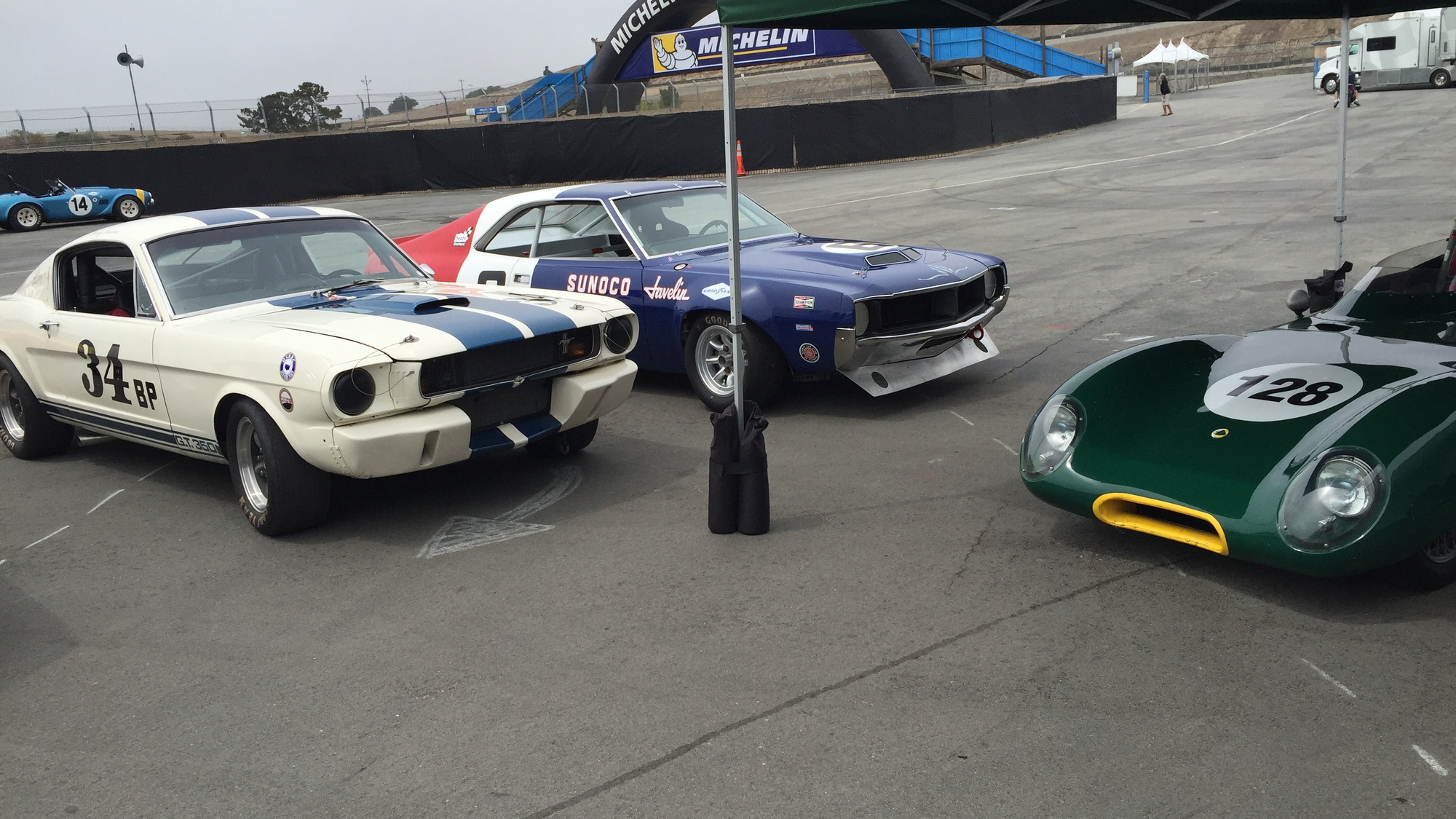 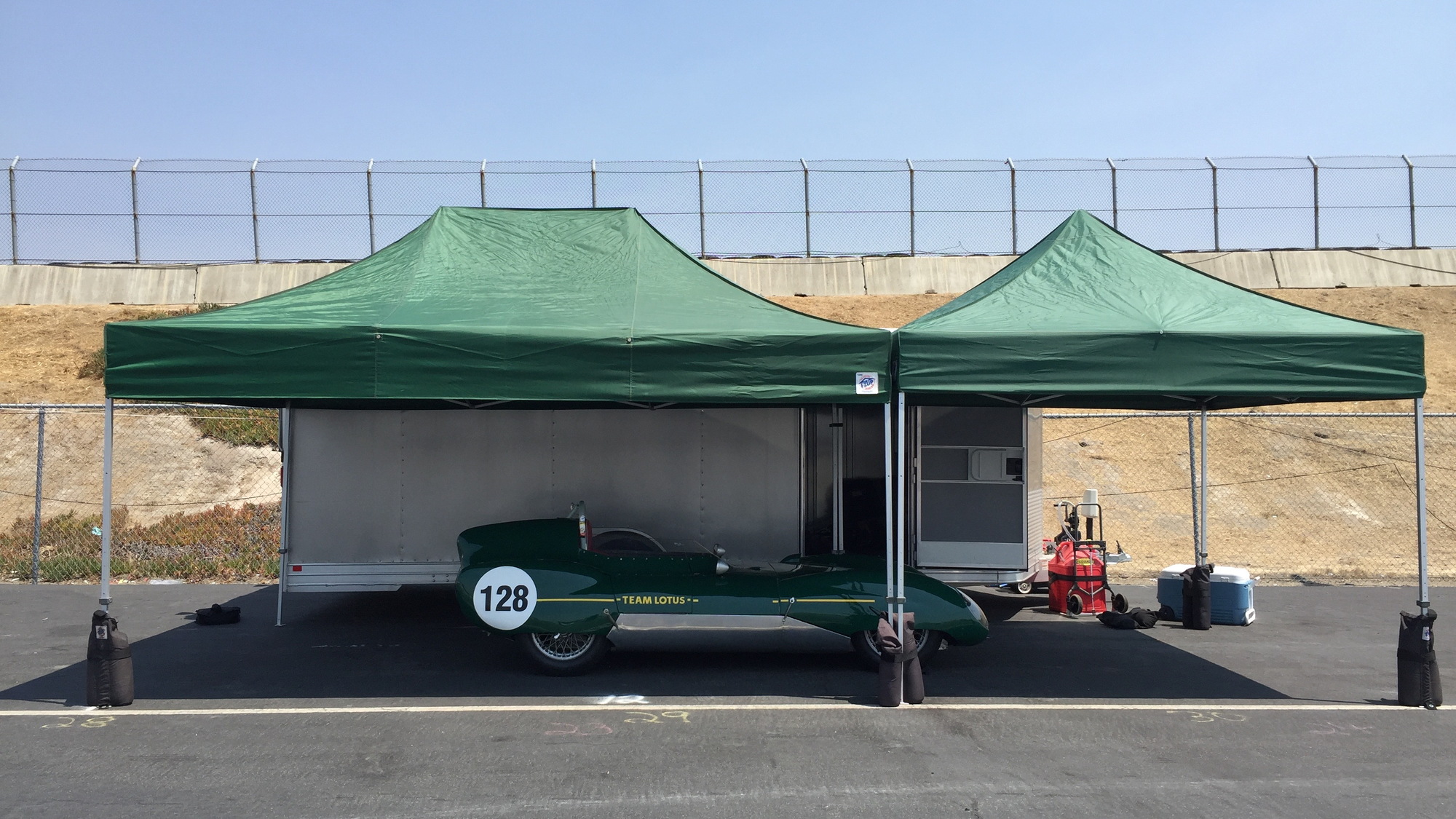 The whole Monterey experience, including the Pebble Beach Concours d'Elegance and the numerous classic car auctions, makes the Rolex Reunion enjoyable, but what makes it truly great is the quality of its fields. Our group of nearly 30 cars included a half-dozen Lotus Elevens, a couple of Lola Mark 1s, and other cars of the period suitably classed. The Pre-Reunion held the weekend prior combined all the sports racers of the period from 1955 to 1961, whereas the Reunion broke them into two groups, for over and under 2.0 liters of displacement.

The Lotus Eleven my wife and I own is suitably vintage for this prestigious event. It is as period-correct as we can make it, so it looks and drives pretty much just like it did in 1956 when Colin Chapman rolled it out of his gritty group of sheds behind the Railway Inn on the outskirts of London. The Eleven marked the beginning of Lotus as a serious player on the world motorsports stage.

Lotus built 150 Elevens in 1956. Its first production race car, the Eleven changed everything at Lotus. Prior to the Eleven, the cars were referred to as Marks--Mark I through Mark X--with only a handful of each example built. The Eleven is an evolution of the Mark VI, Mark VIII, and Mark IX. (The Seven came later, out of sequence.) After the Eleven, Lotus moved into a larger facility in Cheshunt and began numbering its cars: Lotus Type 14 (Elite), Lotus 15, Lotus 49, Lotus Type 111 (Elise).

Orders for Elevens poured into Lotus as soon as it was shown in November 1955 at the Earls Court motor show. Lotus Elevens quickly dominated small-capacity sports racing, winning races all over England and Europe. An Eleven fielded by Team Lotus won its class at Le Mans in 1956. The team members were known to drive Elevens down dark, wet country roads through the night to make it to a track in time to start a race. Road & Track tested an Eleven, put it on the cover, and ruled it "an impractical, highly desirable combination."

Our Lotus Eleven is configured exactly as it was in when it arrived new in the U.S. in 1956. It comes with a Coventry Climax FWB 4-cylinder engine displacing 1460cc and rated at 100 horsepower at 6200 rpm. These early Coventry Climax engines were originally designed to power water pumps to put out fires in England. With Colin Chapman's innovative spaceframe construction and aluminum bodywork, the Eleven weighs just 1020 pounds. Lotus claimed it capable of accelerating from 0-60 mph in 10 seconds, with a top speed of 112.5 mph.

Those aren't impressive specifications by today's standards, but sitting mid-pack in a field of 30 sports racers tuned similarly is among the most exciting things one can do.

Climbing into the Eleven is similar to climbing into a Formula car: Stand on the seat, place your hands on the solid structure to the sides, and lower your body into seat while pushing your feet toward the pedals.

The period-correct seat is comfortable and the car is not as cramped as it looks because there is room under the hard aluminum tonneau that covers the passenger seat. There is not sufficient space between the steering wheel and the tonneau cowl for my fingers at the 10 o'clock position, so I shuffle steer in tight corners, which has never been difficult.

Before driving it, I thought sitting on the right side of the car would be a challenge, but in practice I've never taken much note of it. Shifting this old sports racer with my left hand is somehow an easier adjustment than I have to make when renting a car at Heathrow, and the shifter falls easily into the gears.

The car starts easily, the Coventry Climax emitting a classic but racy British sports car burble through a long muffler. First gear is tall, and that can present challenges. Driving slowly through the paddock requires frequent shifts to neutral because holding down the clutch pedal is a bad idea. Starting off, never the happiest moment in our Eleven, requires revving the engine robustly and slipping the clutch a bit to avoid stalling. Immediately prior to one of the Pre-Reunion rolling race starts, a birdcage Maserati Tipo 61 practically parked in Turn 11, causing me to come to an almost complete stop. Naturally, that was the very moment the starter decided to throw the green flag, and I was left sputtering up the hill lugging along in first gear while the rest of the field screamed over the horizon. Looking back, I should have pushed in the clutch pedal, revved the engine, and re-started. But I didn't think of that at the time.

I find when I push the car too hard in turns the rear end can come around quickly, sending the car into a loop. The hard, skinny Dunlops offer relatively little grip. Braking performance is good thanks to four-wheel disc brakes (inboard at the rear), which was very innovative in 1956. The aerodynamic bodywork was a sensation when it was revealed and it still looks great today. While developing the design, Frank Costin had Colin Chapman strap him across the hood of a Lotus Mark VIII and drive at speed down an airfield so Costin could observe the behavior of tufts of wool he had glued to various portions of the body. Wind tunnels weren’t in common use yet.

Low horsepower and skinny tires means the Eleven requires less maintenance than is typical for big horsepower cars with wide racing slicks. As a result, I can field it myself--no crew needed. Vastly lighter than a Trans-Am Camaro, I can shove it up into the trailer, haul it to the track and run it without assistance. This year, like last, I towed my Lotus Eleven from New Jersey to Monterey and back, a drive unto itself.

Sometimes while hurtling down a straightaway, or more often when looking at the car, I think for a moment of the guys at Lotus excitedly working in their dark shops all night and of Frank Costin strapped across the hood, watching those tufts of wool fluttering around at speed.

I appreciate their efforts, and the Motorsports Reunion is the perfect place to show off the fruits of their labor.