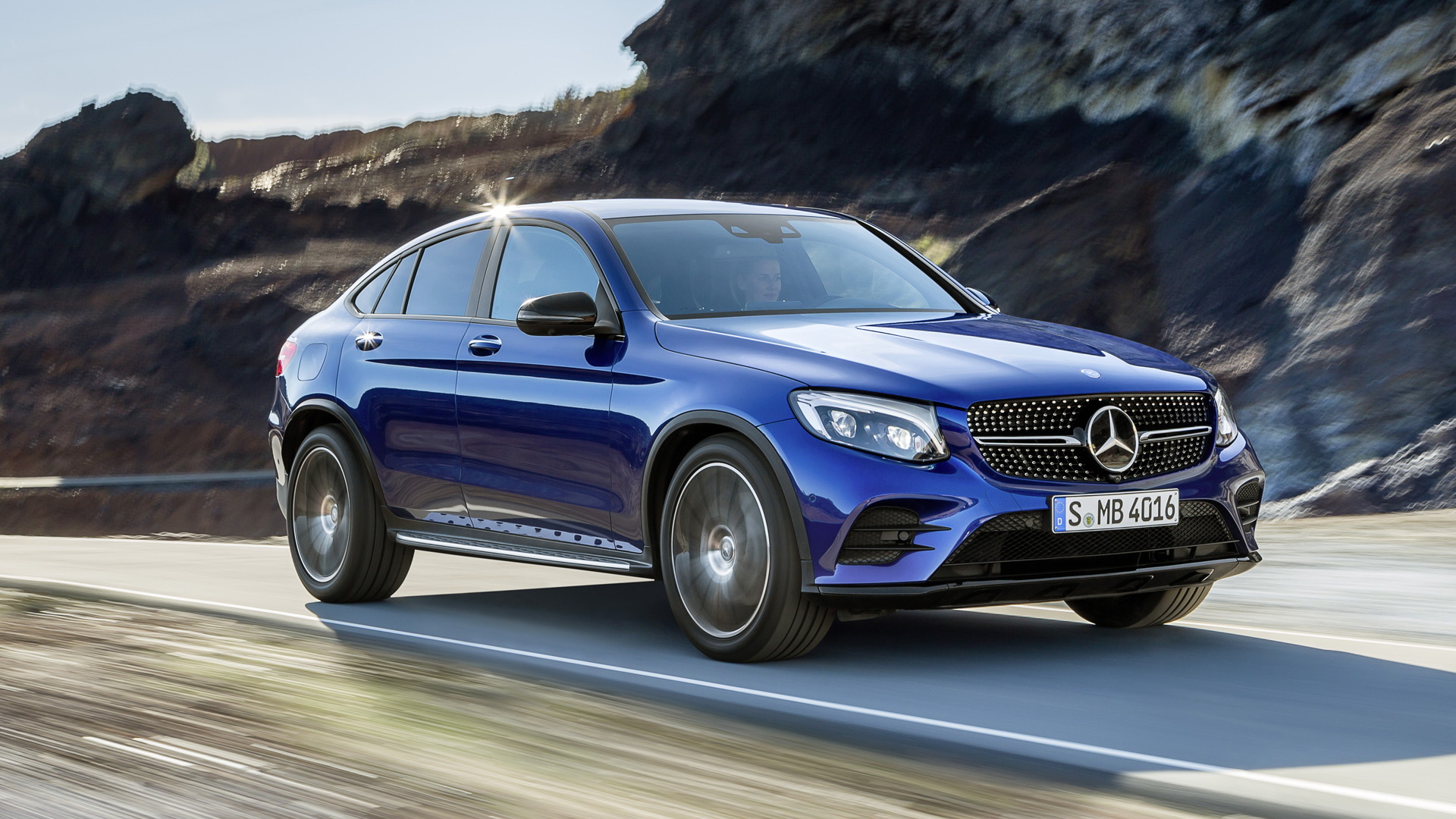 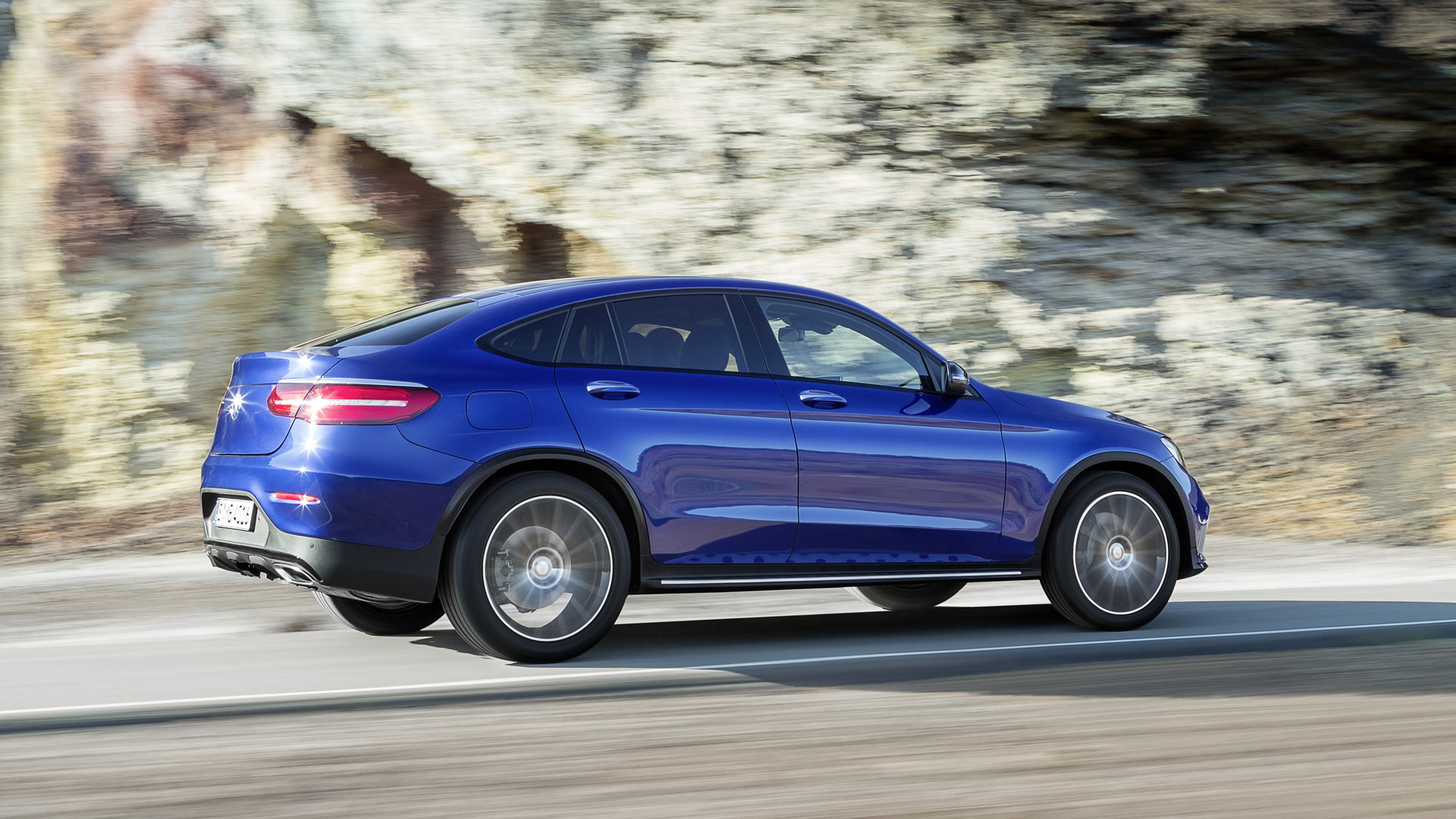 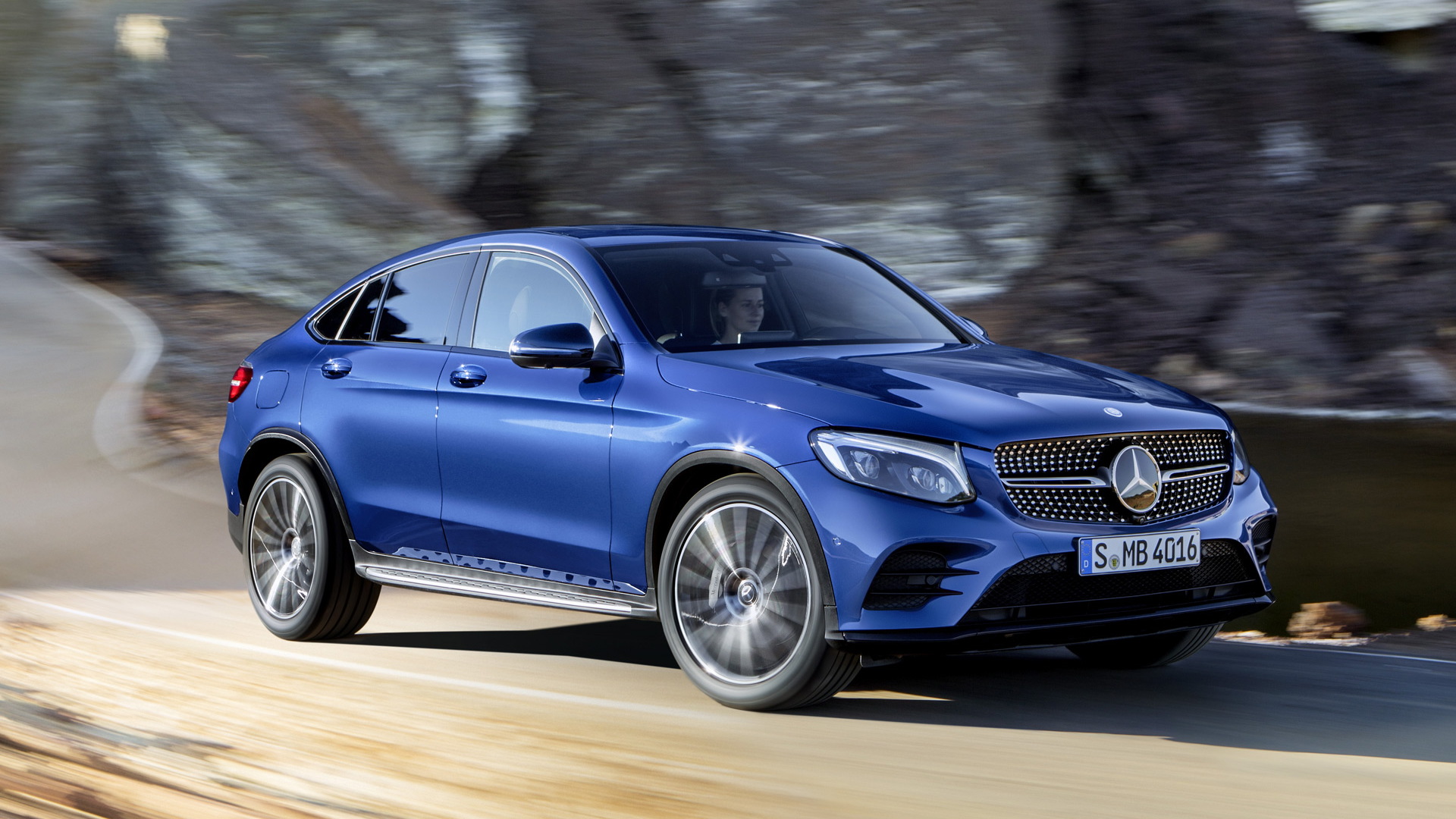 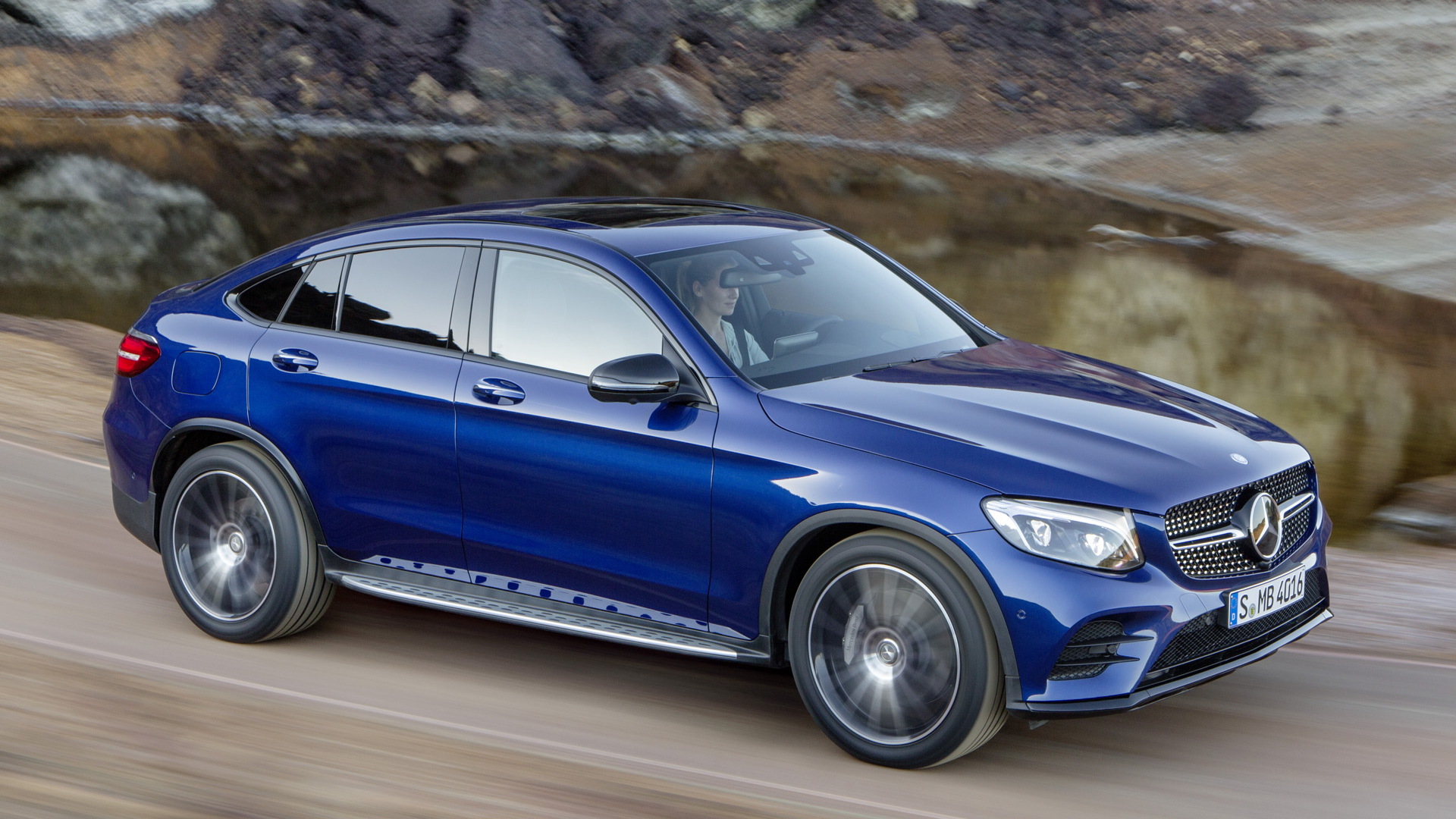 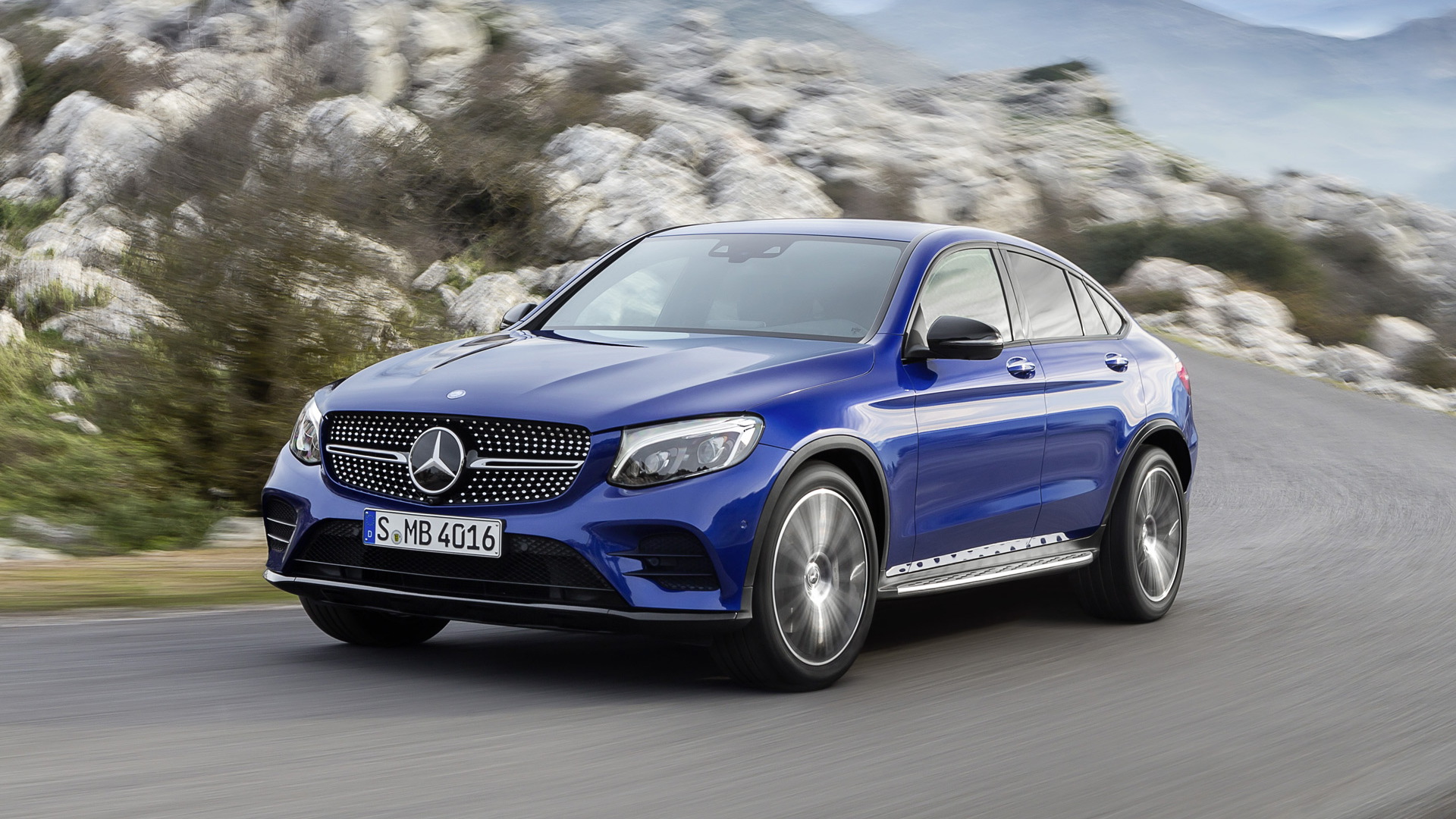 Car companies are in the business of selling sex by way of sheet metal and petroleum (or electrons), and one way they've found to getting you all hot and bothered is by using the word "coupe."

In this new and sometimes alarming world, a vehicle can be any body style at all and still be called a coupe. Sedan, SUV, one day maybe even a minivan—just call it a "coupe" and it automagically becomes sleeker and more desirable, a must-have.

A coupe, by way of reminder, is a two-door, short-roof version of an existing sedan.

Above is the new Mercedes-Benz GLC Coupe. Though it has a low roofline, a sleekly tapered rear pillar, and a somewhat tangential relationship with the C-Class sedan, it is most assuredly not a coupe.

Mercedes may have started the not-a-coupefest with the original CLS-Class, but they're not alone, not at all. BMW's in lockstep, and Mazda's been known to hint at its coupe-like utility vehicles and hatchbacks, as has Jaguar Land Rover.

It's marketing, and by definition it's hard to argue with, because it often defies logic on purpose. So rather than tell them all to get in the sea, here's a handy guide to what actually is a coupe, and several examples of what is not.

The Honda Accord Coupe actually is a coupe. Two doors, short roof, related to a sedan....check, check, check.

The BMW X4 is definitely not a coupe. A better 3-Series hatchback than the Gran Turismo? Damned if it isn't, but it is not a coupe.

This wheel of Dutch gouda cheese

This wheel of Dutch gouda is not a coupe, now, is it? It's a firm yellow cheese made from cow's milk, named after a small city in the Netherlands, and quite popular in many cooler cases. But it meets almost none of the qualifications of being a coupe.

The Mercedes-Benz CLS is not a coupe. The 4-door "coupe" that started it all, the CLS is mostly a fancy E-Class with a very low roof and a smaller back seat. Oddly it has nothing to do with any C-Class cars, either. It's sleek and sexy, all right, but a coupe? No, no it is not.

Merle Haggard was not a coupe. One of the many fathers of outlaw country, this notorious badass cemented his place in legend somewhere between writing bad checks and writing "I'm A Lonesome Fugitive." Haggard died this year, leaving behind a rich legacy of music, 38 country #1 hits, 5 ex-wives, and an irreplaceable, somewhat mournful sound. Merle Haggard was not a coupe. [Photo by Country Music Association]

The Mercedes-Benz SLC (nee SLK) is not a coupe. It's a hardtop convertible. Coupes have fixed roofs. Could we call it a coupe? Yes, we could, but we'd lose your respect—and your respect is our tiger blood.

These coupes actually are coupes. Properly known as Champagne coupes, these glasses have a low, bowl-shaped stem and are used for serving the bubbly stuff. Legend has it that the shape and volume of the coupe was modeled on Marie Antoinette's breast, but this could not be verified at time of writing.

The C-Class Coupe is mostly a coupe. Yes, it's a coupe, but if you want to get technical with the EPA, a 2-door car with a wheelbase as long as this might also be called a 2-door sedan.

This wheel of Dutch edam cheese

This wheel of Dutch Edam is not a coupe. Related to the gouda above, this Edam is a more pale cousin that travels well, rather like the Dutch themselves. Wikipedia says it was the world's most popular cheese for about 400 years, presumably until Cheez Whiz came along. The rind isn't tasty, but it's edible wax, so have at it. [By Yvwv]

The Audi A7 is not a coupe. It's a hatchback, or perhaps, a 5-door coupe at best, if you're willing to play along with that game. Seriously, Germany.

The BMW 6-Series Gran Coupe is not a coupe. Stick with us here, hold a hand if you need. The Gran Coupe isn't your mother's mother's 2-door—it's a 4-door derived from a 2-door that's derived from a 4-door. In other words, it's just one DNA test away from a Maury appearance.

The Mercedes-Benz GLE Coupe is not a coupe. If you haven't grasped this yet, go find an adult to help explain the pretty pictures.